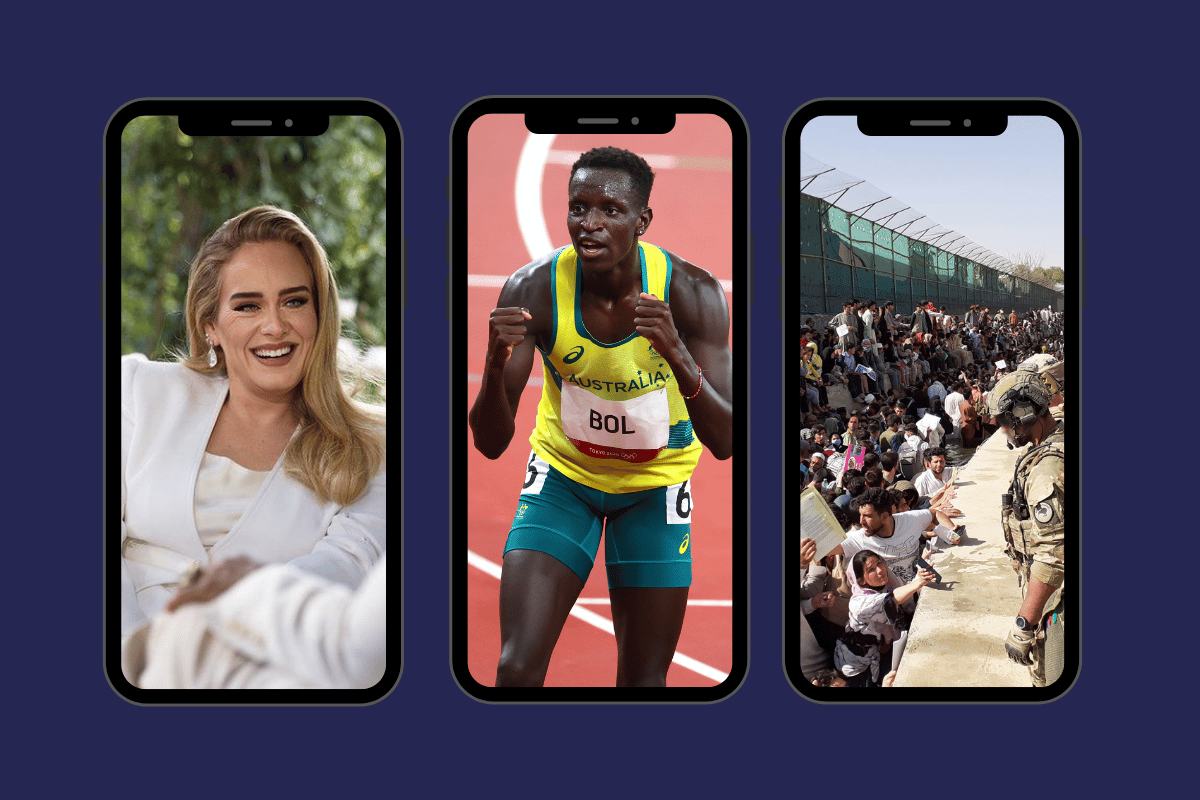 2021 has been a truly overwhelming year. Lockdowns, Parliamentary disasters, floods, earthquakes and more.

As this year comes to a close, (thank god), it's the perfect time to look back on the stories that piqued the interests of Australians across the country.

Thanks to data, we can pinpoint the moments of 2021 that captured the most attention. It ranges from the rescue of Cleo Smith, the reemergence of Adele, the story of Olympic sprinter Peter Bol, to the humanitarian crisis in Afghanistan and updates in the case of William Tyrrell.

So without further ado, let's unpack what we were all frantically googling in 2021.

Now it simply couldn't be a 2021 deep dive without a mention of COVID.

When it came to COVID-19 related searches, there was a specific interest in updates for New South Wales, Victoria and Queensland cases and border restrictions.

Only spiking in the last month, Omicron has also 'made a name for itself' in Google Search, with many Aussies trying to find out the variant's severity and relevance.

Dr Angelique Coetzee, chair of the South African Medical Association, was amongst the first to spot the Omicron COVID-19 variant.

When Dr Coetzee spoke to Mamamia this year, she highlighted that data suggests a high transmission rate, but that "we don't see severely ill patients" when it comes to contracting Omicron.

As for what's trending in search currently re COVID-19? Aussies are still apprehensive of border closures and restrictions in the lead-up to Christmas: we have our fingers crossed for a bit of normalcy this festive season.

The story of Cleo Smith, not only captured the hearts and attention of Australia but also across the globe.

The four-year-old girl went missing from her family's tent while camping at the remote Blowholes campsite in Western Australia. Eighteen days later, she was discovered by police in a locked Carnarvon home.

When the news broke that Cleo had been found, there was shock, relief and gratitude, therefore explaining the keen interest in the case regarding Google Search results.

Media coverage was monumental to say the least over Cleo's disappearance and rescue. But once Cleo was returned to her relieved family and able to start to healing process, the news coverage didn't stop. Rather it amplified.

As Mamamia's news editor, Gemma Bath, wrote this year: "We are not owed a front-row seat to Cleo's recovery. We can report. We should be reporting. It's an important story to tell, and the police and Cleo's family are sharing details they are happy for us to publish. The issue arises when the media - and the public that demands it - probe too far."

In 2014, three-year-old William Tyrrell went missing from his foster grandmother’s house in Kendall on the NSW Mid-North Coast.

Seven years later, there have been major developments in the case.

In November this year, police began a high-intensity search for the missing three-year-old, sparking renewed interest in the disappearance.

Investigators confirmed they have centred in on "one person of interest" and that amid the new search, they are "looking for human remains".

William Tyrrell’s foster parents are also each facing one count of common assault, alleged to have occurred at a home on Sydney's upper north shore this year. The charges do not relate to William. NSW Police Commissioner Mick Fuller also confirmed that NSW police sought an apprehended violence order (AVO) against the foster parents of William Tyrrell.

The search continues to take place at the foster grandmother’s former home in Kendall, potential pieces of evidence taken away for testing and a concrete slab near the home also scanned.

In late October this year, Australian personality Bert Newton passed away at the age of 83.

The entertainment icon died while undergoing palliative care at a private clinic in Melbourne.

It was his enduring love story with his wife of 47 years, Patti, that many people were interested in via Google Search data.

From the likes of Australia’s most well-known politicians to Aussie A-listers, a wave of people came forward in the wake of his death to share memories and stories.

Comedian Denise Scott wrote on Twitter at the time: "Bert Newton was the best. Years ago when my friend and comedy colleague Lynda Gibson was dying of cancer, we had a fundraising comedy ‘roast’ for her. Bert turned up at HiFi bar in Melbourne and paid homage by removing his 'rumoured' toupee and revealing his total baldness. It meant the world to us."

After two decades of military involvement in Afghanistan, Australia followed the United States in withdrawing our troops from the country; a move which paved the way for hardline Islamist group, the Taliban, to steamroll their way into Kabul and reclaim control of Afghanistan's government in August 2021.

Scenes of desperation followed, many of which have been shown around the world.

Though the Taliban promoted empty promises that life under their rule wouldn't be as barbaric as previously seen in history, the news that has since circulated proves otherwise.

Mahjabin Hakimi, a member of the Afghanistan women's youth volleyball team, was murdered. She was reportedly killed by the Taliban for the "crime" of refusing to give up sport.⁠

It's stories like Hakimi's that have continued to circulate. If you would like to show your support for the people of Afghanistan, click here for more information.

On October 21, Alec Baldwin was in character, rehearsing a scene for his new Western film, Rust, that involved him shooting a gun on set.

When the actor allegedly fired the prop gun, the bullet struck cinematographer Halyna Hutchins, who died from her injuries.

The incident caused waves in the film industry, actors and crew calling for better safety measures and reform. It was also a major news story given the fact it involved an A-list actor.

Just last week, Baldwin spoke for the first time about the horrific incident, denying reports he pulled the trigger.

Investigators recently confirmed that a live projectile was fired from the revolver gun. They also found around 500 rounds of ammunition near the scene. The sheriff declined to comment on how the live ammunition ended up on a film set. Investigations are ongoing.

When Adele releases a new album, you bet everyone will be listening.

Whether it was to do with her childhood, body changes, current relationship, her child, her music or her house tour: Adele was undoubtedly one of the most searched celebrities this year.

To promote her new album, 30, the singer did a significant amount of press, including interviews with Oprah, Vogue, and two television performance specials.

Listen to The Spill: Adele and the internet’s obsession with thin women. Post continues after audio.

It was a major treat for fans, including us Aussies, given Adele had been out of the spotlight for five years prior.

The tennis star opened up in 2021 about her struggles with mental health and being in the spotlight. In June, the 24-year-old took to Twitter to announce she was withdrawing from the French Open to focus on her wellbeing.

Osaka revealed she had suffered "long bouts of depression" since winning her first Grand Slam title at the US Open in 2018, when she lifted the trophy to a chorus of boos after Serena Williams was awarded a game penalty.

She said talking to the media triggered "huge waves of anxiety," adding that she also gets social anxiety, which she tries to dull during tournaments by wearing headphones.

She finished by saying she'd be taking some time away from the court and she'd reach out "when the time is right" to discuss how the tennis industry could make things better for players, press and fans.

Another amazing female tennis champion to take Aussies by storm is Ash Barty. This year she won the Wimbledon Women's Final, becoming the first Australian woman to do since 1980.

The adoration for Barty is often linked back to her humility off and on the court, with no outbursts, racquet-throwing or disputes with umpires. In fact, she's regularly laughing and smiling on and off-court.

The World No. 1's win at Wimbledon also fell on the end of NAIDOC week - a time to celebrate the culture and achievements of Aboriginal and Torres Strait Islander Australians.

Barty was 12 years old when she learned that her great-grandmother was part of the Ngaragu people. In 2018, she became a Tennis Australia Indigenous ambassador. Barty also thanked her mentor, tennis player Evonne Goolagong Cawley, for helping inspire her.

"Evonne is a very special person in my life. I think she has been iconic in paving a way for young Indigenous youth to believe in their dreams and to chase their dreams. She’s done exactly that for me as well."

2021 was a year of reckoning for former Attorney-General and MP Christian Porter.

The 51-year-old was embroiled in serious allegations for most of 2021.

After the ABC published a story about a historical rape allegation against an unnamed cabinet minister earlier this year, Porter outed himself as the accused and was then demoted from Attorney-General to industry minister.

The MP has strenuously denied the allegations, and settled a defamation case against the national broadcaster.

Listen to Mamamia Out Loud: Christian Porter and the conversation Australian women are having. Post continues after audio.

In September, it was revealed anonymous donors paid for part of Porter's legal fees. The scandal prompted Porter to tender his resignation from the cabinet, rather than publicly reveal who the donors were.

In November, Porter then announced he was resigning his role, and leaving politics altogether.

For many Australians, especially those who were in lockdowns across the country, the Olympics were a welcomed distraction from our reality.

And one of the main Australian Olympians that the public was interested in was sprinter Peter Bol, who placed fourth in the men's 800 final.

Bol was born in Sudan, and at age four, his family fled the war-torn country and emigrated to Egypt. They lived there for six years before migrating to Toowoomba, Queensland.

"So [my father] always tried to push us a bit harder in whatever we do. Sudan has always had conflict and it wasn’t really a safe place to be," he told The West Australian in 2015. "So they saw that the best opportunity was to get their children out of there and work towards a better life.

"I’m pretty grateful to [my parents] because all of their circumstances worked to my favour. Life could be a lot different."