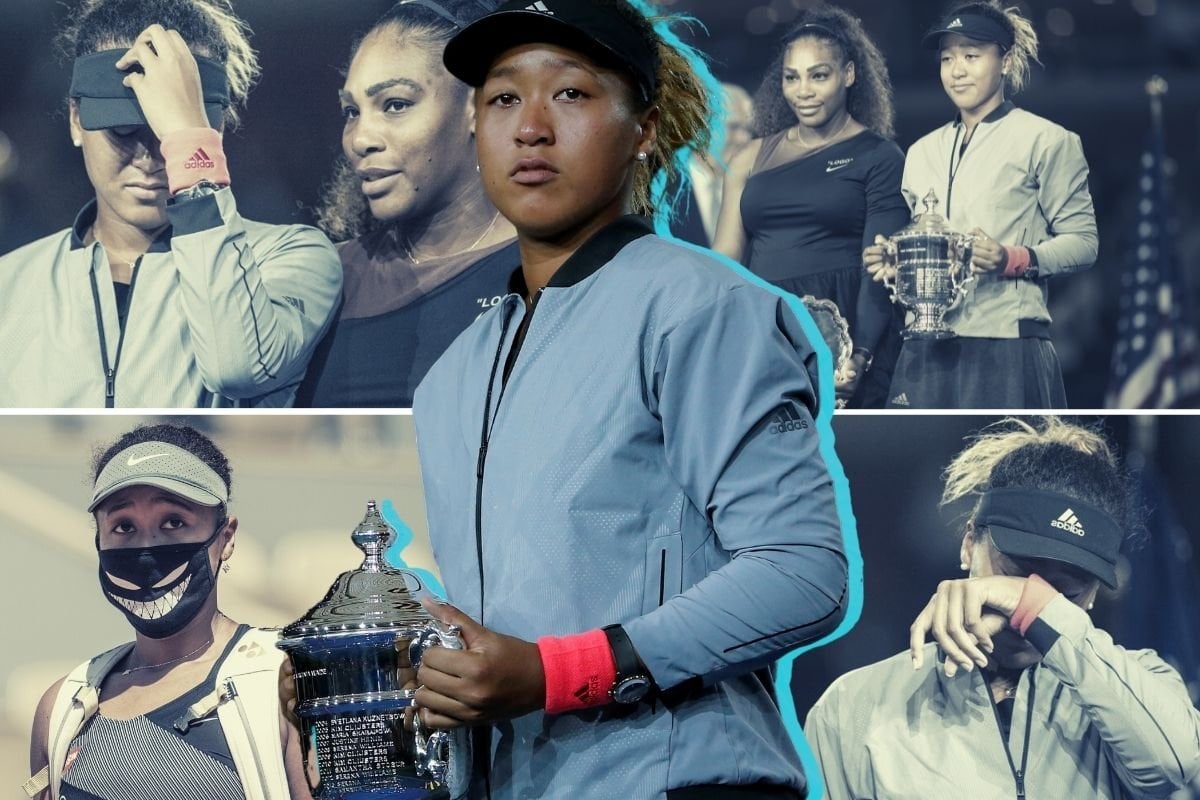 It's a hard video to watch.

Naomi Osaka stands beside Serena Williams on the podium after winning the 2018 US Open.

As the announcer welcomes everyone to the broadcast, a low rumble of sound starts to build. Initially, it sounds like cheering. But as host Tom Rinaldi pauses, the booing gets unmistakingly clearer.

After enduring it for 30 seconds, a then 20-year-old Osaka pushes her cap forward to shield her eyes. Noticing her sadness, Williams puts her arm around Osaka as the young up-and-coming tennis star sobs.

Osaka is being booed for winning. It's her first Grand Slam win. Her moment. But the crowd is there for Williams. During the match, Williams had accused the chair umpire of sexism after being given a penalty, and her fans are showing their support and outrage at her loss.

Playing that final against her idol, Williams, was Osaka's childhood dream. But instead of answering Rinaldi's question of, "how does the dream compare to reality?" a teary Osaka tells the crowd: "I'm going to sort of defer from your question, I'm sorry... I know that everyone was cheering for her, and I am sorry it had to end like this. I just want to say thank you for watching the match."

Watching the uncomfortable and cruel reality of Osaka's first big win play out, it's incredible she even held herself together enough to answer questions, compose herself, and accept her trophy.

But what we're learning three years later - as the now four-time Grand Slam winner tries to instill boundaries to protect her own mental health - is just how traumatising that experience was for Osaka.

It started with a tweet on May 27, 2021, as the French Open was getting underway in Paris.

"Hey everyone, hope you're all doing well. I'm writing this to say I'm not going to do any press during Roland Garros," Osaka began.

The world's highest-earning female athlete wrote that she hopes the "considerable amount that I get fined for this will go towards a mental health charity".

"I've often felt that people have no regard for athletes mental health and this rings very true whenever I see a press conference or partake in one," the world No. 2 wrote.

Osaka said the decision was "nothing personal" against the tournament or journalists.

"I've watched many clips of athletes breaking down after a loss in the press room and I know you have as well," she wrote.

"I believe that whole situation is kicking a person while they're down and I don't understand the reasoning behind it." 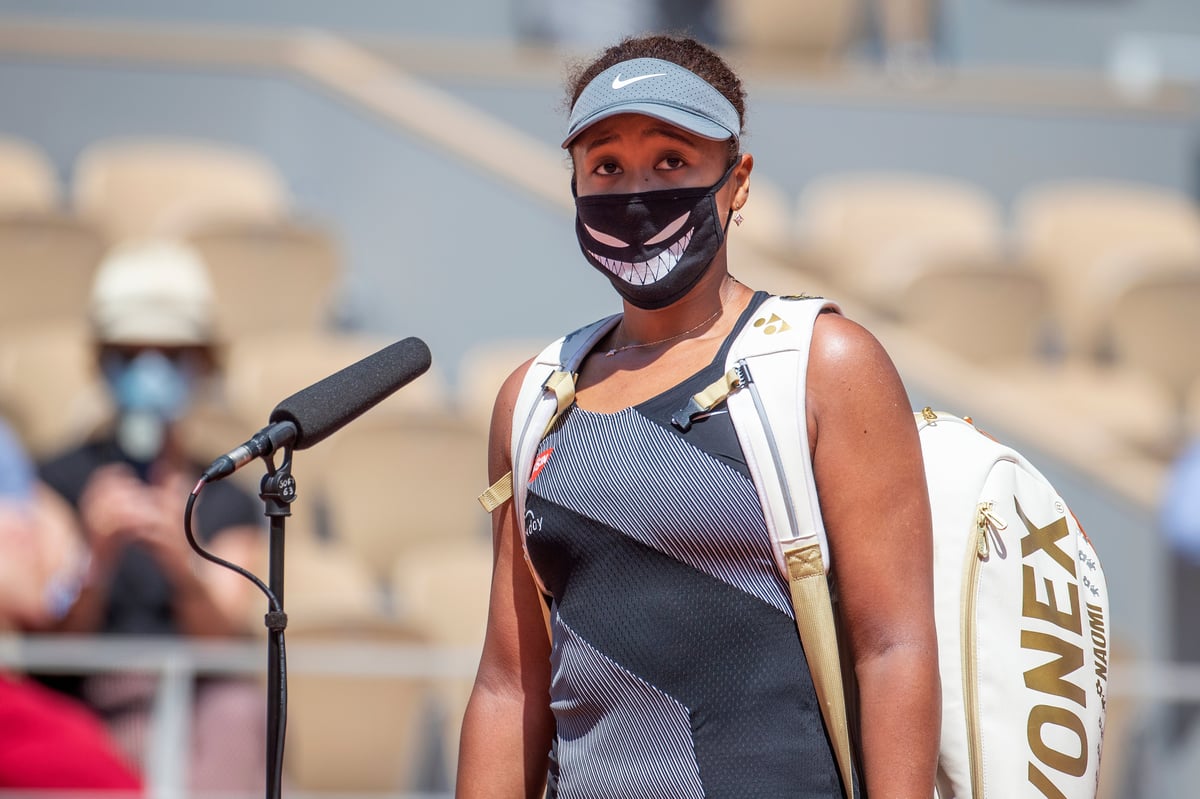 True to her word, Osaka participated in the on-court interview but didn't turn up for her first post-match press conference at the French Open. Image: Getty.

Tennis players are required to attend post-match news conferences at major tournaments, and it didn't take long for Osaka's tweet to be plastered on practically every news site in the world as commentators dissected whether there was merit to her complaints. And some of the commentary was brutal.

Get over yourself, @naomiosaka - playing the mental health card to avoid legitimate media scrutiny is pathetic. https://t.co/0rCCusr6P8

Following her announcement, the Roland-Garros officials said they had asked Osaka to reconsider her position and tried unsuccessfully to speak with her to check on her well-being, understand the specifics of her issue and what might be done to address it.

They said they received a "lack of engagement" from Osaka.

Osaka's $19,000 fine and withdrawal from the competition.

Naomi Osaka stuck to her word, and after her first-round win at the French Open on May 30, the Japanese-born player was hit with a $AU 19,000 fine.

A statement from all four Grand Slams - Roland Garros, Wimbledon, the US Open, and the Australian Open - read: "Naomi Osaka today chose not to honour her contractual media obligations. The Roland-Garros referee has therefore issued her a US$15,000 fine, in keeping with article III H. of the Code of Conduct."

"The mental health of players competing in our tournaments and on the Tours is of the utmost importance to the Grand Slams," it continued. "We individually and collectively have significant resources dedicated to player well-being. In order to continue to improve however, we need engagement from the players to understand their perspective and find ways to improve their experiences."

The statement said Osaka could face more sanctions and even a suspension or ban from further tournaments if she continued to avoid the media.

The next day Osaka tweeted: "Anger is a lack of understanding. Change makes people uncomfortable," and then the very next day, she announced she was withdrawing from the competition.

anger is a lack of understanding. change makes people uncomfortable.

Osaka wrote on Twitter: "Hey everyone, this isn't a situation I ever imagined or intended when I posted a few days ago.

"I think now the best thing for the tournament, the other players and my well-being is that I withdraw so that everyone can get back to focusing on the tennis going on in Paris."

The 23-year-old said she had suffered "long bouts of depression" since winning her first Grand Slam title at the US Open in 2018, when she lifted the trophy to a chorus of boos after Serena Williams was awarded a game penalty.

She said talking to the media triggered "huge waves of anxiety," adding that she also gets social anxiety, which she tries to dull during tournaments by wearing headphones.

"I never wanted to be a distraction and I accept that my timing was not ideal and my message could have been clearer," she continued. "More importantly, I would never trivialise mental health or use the term lightly."

She finished by saying she'd be taking some time away from the court and she'd reach out "when the time is right" to discuss how the Tour could make things better for players, press and fans.

The French Tennis Federation, the organisers of the tournament, called Osaka's withdrawal "unfortunate," while the Women's Tennis Association said mental health was one of the highest priorities of the organisation.

When asked about Osaka's withdraw, Serena Williams said: “I feel for Naomi. Not everyone is the same. I’m thick. Other people are thin. Everyone is different and everyone handles things differently. You just have to let her handle it the way she wants to and the best way she thinks she can. That’s the only thing I can say: I think she is doing the best she can."

Rafael Nadal defended the media's role in tennis, saying, "Without the press, probably we will not be the athletes that we are today. We aren't going to have the recognition that we have around the world, and we will not be that popular, no?"

Rafael Nadal at his pre-tournament press conference when asked by @EleanorcrooksPA about Osaka's decision not to speak with the press pic.twitter.com/K7xPPwNwnG

Men's world No.2 Daniil Medvedev echoed that sentiment, saying, "I understand why she does it and I respect her opinion. Me, I have no problems. I try always to come to a press conference, whether in a bad mood or good mood. I feel like, even sometimes in the bad mood, I can be in a better mood after talking to you guys."

"In my opinion, press is kind of part of the job. We know what we sign up for as professional tennis players," said women's world No.1 Ash Barty. "At times, press conferences are hard, of course, but it’s also not something that bothers me."

I am so sad about Naomi Osaka.I truly hope she will be ok. As athletes we are taught to take care of our body, and perhaps the mental & emotional aspect gets short shrift. This is about more than doing or not doing a press conference. Good luck Naomi- we are all pulling for you!

Mental Health is nothing to criticize. Nothing to joke about. Pls take your mental health seriously. Without my support system, I truly believe I would not be here today. Here for you @naomiosaka https://t.co/8UdJexQPVj

Here's how the world outside of tennis reacted to Osaka's decision. Her boyfriend, rapper Cordae, was among those fiercely in defence of the young star writing, "No need to apologise to ANYBODY!" under her final post.

Let’s boycott the French open. Naomi is the most exciting player anyway. Imagine punishing someone for having anxiety... in 2021.

the world men’s #1 tennis player has been pushing anti-vaccine positions all year with no penalty and the women’s #1 naomi osaka has to withdraw from French open to protect her own mental health? The tour is completely backwards on health.

I feel for this young woman and admire her courage for acknowledging her personal struggles with depression and anxiety.
Isn’t it enough that she’s a great athlete? Should she be punished because she doesn’t want to speak?https://t.co/Y9U6bOly6m

Shoutout to Naomi Osaka for prioritizing her mental health.

These words just pierced a hole straight through my heart. May the vulnerability and courage of #NaomiOsaka be met with introspection, kindness and space. https://t.co/6LeGLXlzSc

The more I see and hear about how top tennis authorities have reacted to Naomi Osaka’s refusal to meet with Media, the more I am simply disgusted with their sexist, ignorant and insensitive behavior. The people running the French Open and the four majors are thugs.

Anyone throwing their 2 cents at this young woman needs to watch this from 2018 after a match in Charleston. Kudo's for Naomi for taking care of herself. Now and then #NaomiOsaka #mentalhealth @RexChapman pic.twitter.com/r8ixMxL6C4

Reply
Upvote
1 upvotes
Nadal looking out for his own interests there.

Reply
Upvote
I get what she is saying. Some of the most horrible people are journalists. They ask questions just trying to get the person all riled up to provoke a response. They are just trolls really.