A new coronavirus variant named Omicron has raised concern around the world, after it was first reported in South Africa this month.

Genomic sequencing has confirmed two COVID-positive people who arrived in Sydney from southern Africa have the new Omicron variant.

On Saturday, the World Health Organisation, named the new variant one of concern because of its "large number of mutations".

The new variant, also known as B.1.1.529, has already seen a number of countries including Australia, the US and the UK introduce travel bans or restrictions.

Here's a rundown of everything we know about Omicron.

Watch: the World Health Organisation classifies Omicron as a variant of concern. Post continues below.

Via the World Health Organisation.

First up, what actually is Omicron and where did it come from?

Omicron is a new variant "of concern" - a label the World Health Organisation has only given to four variants to date.

The variant was first reported in Botswana, South Africa, on November 24 and has since been found in South Africa, Hong Kong, Belgium and Israel.

So far, we know it has double the number of mutations as the Delta variant, with health authorities working to determine if it is more transmissible or infectious than other variants.

However, it could take weeks for scientists to fully understand the variant's mutations.

"This new variant of the COVID-19 virus is very worrying. It is the most heavily mutated version of the virus we have seen to date," said Professor Lawrence Young, a virologist at the UK's Warwick University.

"Some of the mutations that are similar to changes we've seen in other variants of concern are associated with enhanced transmissibility and with partial resistance to immunity induced by vaccination or natural infection."

What does it mean for vaccines? Image: Getty. At this stage, BioNTech said they are expecting more data on the new variant within two weeks to help determine whether its vaccine produced with Pfizer will have to be reworked.

On Friday, Pfizer and BioNTech said they would expect to be able to ship a new vaccine tailored to the new variant in approximately 100 days, if it was deemed necessary.

"We understand the concern of experts and have immediately initiated investigations on variant B.1.1.529," BioNTech said in a statement.

"We expect more data from the laboratory tests in two weeks at the latest. This data will provide more information about whether B.1.1.529 could be an escape variant that may require an adjustment of our vaccine if the variant spreads globally."

Moderna is also working to advance a booster candidate tailored to the new variant and testing a higher dose of its current booster.

"A booster dose of an authorised vaccine represents the only currently available strategy for boosting waning immunity," Moderna said in the statement.

Johnson and Johnson said it is also closely monitoring emerging strains of COVID-19 and is testing the effectiveness of its shot against Omicron.

How has Australia responded to the new variant? 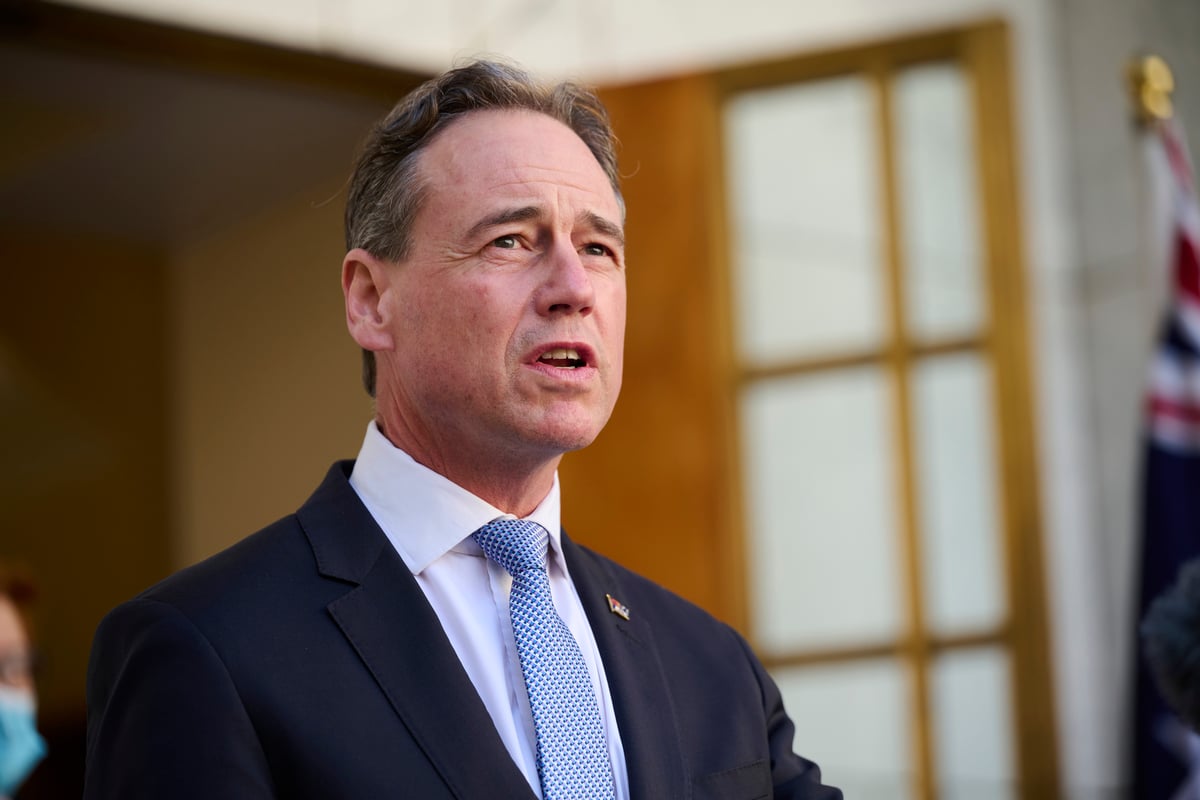 Health Minister Greg Hunt's press conference. Image: Getty. Firstly, anyone who isn't a citizen of Australia or their dependents will not be able to enter Australia if they visited nine African countries within the past 14 days, effective immediately. These countries include South Africa, Namibia, Zimbabwe, Botswana, Lesotho, Eswatini, The Seychelles, Malawi, and Mozambique.

The government will also immediately suspend all flights from those nine African countries.

Secondly, any Australian citizen or resident and their dependents arriving from those countries will need to go into immediate supervised quarantine for 14 days, subject to the requirements of the state they arrive in.

Anyone who has already arrived in Australia and who has been in any of the nine countries within the past 14 days also must isolate, get tested, and stay in quarantine for 14 days since they left that country.

Also in response to Omicron concerns, any international arrivals into Victoria, ACT and NSW will now be required to self-isolate for at least 72 hours, regardless of their vaccination status.

Hunt confirmed there are currently no known cases of the Omicron variant in Australia, however, one person in the Howard Springs quarantine camp in the Northern Territory has tested positive for COVID-19 after arriving from South Africa. It has not yet been confirmed if that patient has the Omicron variant.

"The world will learn a lot over the coming weeks."

Meanwhile, Burnet Institute director Professor Brendan Crabb said while he is concerned, "It is not time to break the glass on the alarm".

"A state of heightened alert and caution is appropriate for us in Australia and for the world," he told the ABC.

He stressed the most important thing wasn't borders, but keeping up vaccine coverage and infection control measures.

"We have to be serious about other interventions and that's what I'm concerned about: masks, clean air, our test and trace system," he said.

"These are things that are not onerous on our society. We need to keep them whether this new variant takes hold or not."

How has the world responded to the new variant?

Global authorities reacted with alarm on Friday, with the USA, Canada, the EU and the United Kingdom among those tightening border control.

The United States will restrict travel from South Africa and neighbouring countries effective on Monday, a senior US administration official said.

Going further, Canada said it was closing its borders to those countries, following bans on flights announced by the United Kingdom, the European Union and others.

The South African Medical Association chair who discovered the variant has said there is too much "hype" around it, as governments slam borders shut and reimpose travel restrictions around the world.

"Looking at the mildness of the symptoms that we are seeing, currently there's no reason for panicking as we don't see severely ill patients," Dr Angelique Coetzee said.

The WHO have also warned against travel curbs for now.

"It's really important that there are no knee-jerk responses here," said the WHO's emergencies director Mike Ryan, praising South Africa's public health institutions for picking up the new variant of the coronavirus that causes COVID-19.

Nick Coatsworth, a former federal deputy chief health officer, told the Today Show, "If this is milder than Delta, you actually want it to spread within your community.

"You want it to out compete Delta and become the pro-dominant circulating virus ... it could be that we want Omicron to spread around the world as quickly as possible."

"It could be that we want Omicron to spread around the world as quickly as possible. If this is milder than Delta, you actually want it to spread within your community."

Dr Nick Coatsworth has said Australians should not be panicked about the Omicron variant. #9Today pic.twitter.com/4f0R0ezqLm

Concerns over the new variant have also affected the financial market, with stocks of oil, airlines and others in the travel sector currently dropping.