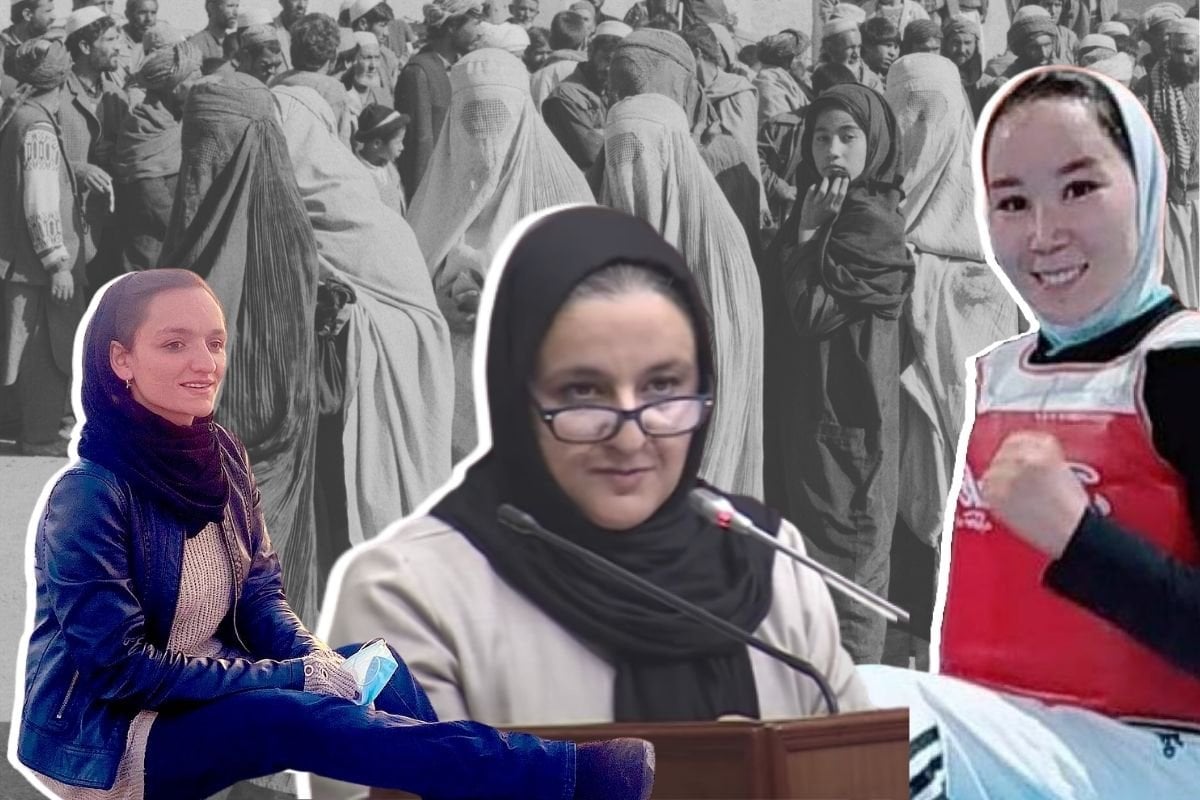 The women of Afghanistan are in grave danger.

The educated, successful, accomplished women of Afghanistan are in even more immediate danger.

As the Taliban spends its first day once again ruling the country after a two-decade war, the progress, education and small but significant steps Afghanistan has made towards equality have been pulled out from beneath the more than 14 million women who call the country home.

Amnesty International says women and girls are discriminated against by the Taliban for the 'crime' of being born female. They had no rights or freedoms whatsoever under their former reign.

In the 20 years since US-led invasion, women have been able to take back some freedoms. But we are already seeing signs that we're about to see history repeat itself.

Here are just five of their stories, as women across the country flee and hide.

Zakia Khudadadi would have been the first woman to represent Afghanistan at the Paralympics this month in Tokyo.

The 23-year-old was given a wildcard to compete in the women's Taekwondo and had just two months to prepare.

"I was thrilled after I received the news that I have got a wild card to compete at the Games. This is the first time that a female athlete will be representing Afghanistan at the Games and I’m so happy," she said, reports the International Paralympic Committee website.

Zakia Khudadadi was set to become Afghanistan's first female Paralympian. "I'm so happy," she said in an interview last week.

But she couldn't leave Kabul in time. Like millions of women, her future under the Taliban will be heartbreakingly differenthttps://t.co/IdDPkOfND1

"I just want to be there with the other athletes from the world and give my best. It is an opportunity to show my ability and I will be so proud to stand with all of those athletes," she added.

Zakia has been winning Championships since she was 18 and was excited to help her country to perhaps its first ever medal at a Paralympic Games.

She was due to fly out today, on August 17. But she won't be going anymore.

Since the Taliban's takeover of Kabul, all airports have been closed and the National Paralympic Committee (NPC) says, "Regrettably, NPC Afghanistan will no longer participate in the Tokyo 2020 Paralympic Games. Due to the serious ongoing situation in the country, all airports are closed and there is no way for them to travel to Tokyo."

If the Taliban take the country back to pre-2001 rule, which they've already shown signs of doing, Zakia won't be able to practice Taekwondo at all.

Rangina Hamidi is the first female Minister of Education for Afghanistan in 30 years.

Born in Afghanistan, she fled to Pakistan during the Soviet occupation and immigrated to the US where she attended high school and received a degree in Religion and Gender Studies at The University of Virginia.

In 2003, she returned to her home country to help rebuild Afghanistan and champion the rights of girls and women. She opened the first women-owned and run social enterprise in Kandahar province, Kandahar Treasure, which provides 400 women with an income producing hand-embroided textiles.

Watch: Rangina is scared for the future of her country. Post continues after video.

Rangina realised that the true key to empowering Afghan women was through education, and since becoming Education Minister has supported and introduced new education initiatives designed to create more gender equality.

With the Taliban now in charge, Rangina has told the BBC she is fearful, "like every woman in Afghanistan".

"Deep down in my heart, I keep telling myself to think that I haven't done anything bad, and hopefully I won't have to pay the price for joining a government position. But now I might face consequences that I never even dreamed of." 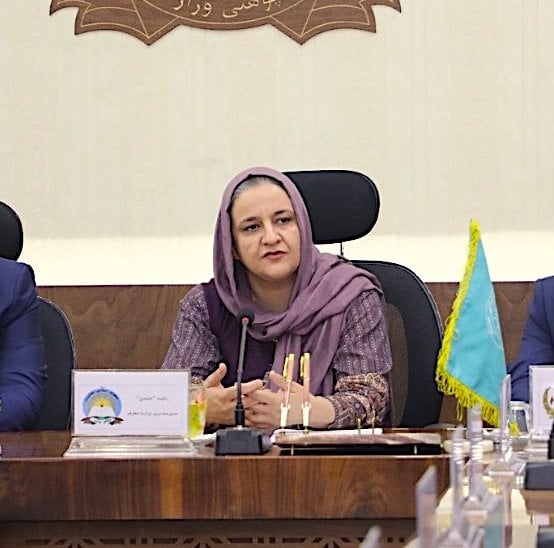 The Taliban have claimed they will write laws to ensure women can participate in public life under their new reign, however they've already signalled their intention to deny girls' education past the age of 12 and to ban women from employment.

Under their former rule, girls were blocked from attending school altogether, residents were ordered to cover their windows so women couldn't be seen from the street, and women were barred from appearing in public without full body coverings and male escorts. Those who refused were publicly flogged or executed.

She used her score to get into the Kabul Medical University and as she told The Media Line, "I was in ninth grade when I decided to become a doctor. One of the attractions of becoming a doctor is that they save lives, regardless of caste, religion and colour."

"Besides being a doctor, I am also interested in politics, because I think that until you have full authority and power, you cannot serve your people properly. So I have to prepare to become the first woman president of Afghanistan, just like [Pakistan’s] Benazir Bhutto was elected as the first woman prime minister in the Islamic world [in 1988]," she added.

This is Shamsia Alizada.

Two years ago, a suicide bomber attacked her school in Kabul. Nearly fifty students were killed.

She wants to become a doctor. pic.twitter.com/YEU9XCyKAJ

Former president Hamid Karzai said the success of Shamsia and other young people in the exam was a sign of "hope for a bright future in Afghanistan".

At sixteen she survived a deadly attack by ISIS on her academy, which killed 40 students. She dropped out for a while, but later returned and managed to produce incredible scores.

To some, Shamsia has been termed the 'Malala' of Afghanistan. But the teenager's ambitions will not be supported under Taliban rule, which doesn't allow women to be educated or employed.

Last year she told The Guardian, "I have some fears about the Taliban’s comeback, but I don’t want to lose my hope, because my dreams are bigger than my fear."

Zarifa Ghafari became the first female mayor in Afghanistan's Maidan Wardak province in 2018, and has used her position to advocate for women's rights ever since.

The 27-year-old is also the youngest mayor in the country, and the Taliban has frequently, even before their recent takeover, threatened to kill her. They've already tried and failed three times.

Given the threats on her life, she was given a job in the presumed safety of the defence ministry of Kabul, looking after the welfare of soldiers and civilians injured in terror attacks.

As the Taliban took control of the capital and the government on Sunday, Zarifa told iNews she was waiting for them to come for her.

“I’m sitting here waiting for them to come. There is no one to help me or my family. I’m just sitting with them and my husband. And they will come for people like me and kill me. I can’t leave my family. And anyway, where would I go?” pic.twitter.com/X2UC9wDGNE

"I'm sitting here waiting for them to come. There is no one to help me or my family. I'm just sitting with them and my husband. And they will come for people like me and kill me. I can't leave my family. And anyway, where would I go?"

The woman who spearheaded Afghanistan's first female national soccer team, Khalida Popal, is in the safety of Denmark. She fled there in 2016 and sought asylum after getting threats from the Taliban as the public face of the team.

Her teammates, however, remain. And now they're now in grave danger.

As she told The Associated Press she's been getting frantic phone calls and distressed voice messages begging for help.

"I have been encouraging them to take down social media channels, take down photos, escape and hide themselves," she told the publication.

This post from one of our players breaks my heart in a small piece. This is painful to see the dreams and hopes of Afghanistan women & girls are fading again. It's painful to witness that they are not allowed to dream again. They are stopped from dreaming. #Afghanistan pic.twitter.com/rq6DkNvQbq

"That breaks my heart because all these years we have worked to raise the visibility of women and now I'm telling my women in Afghanistan to shut up and disappear. Their lives are in danger."

The team was first formed in 2007, and as Khalida said, "my generation had the hope of building the country, developing the situation for the next generation of women."

Under the Taliban, women were barred from participating in public sports events at all.

How can you help?

CARE Australia have launched a dedicated fundraising appeal for Afghanistan.

Women for Women International, a nonprofit humanitarian organisation that provides support to female survivors of war, tweeted that they are collecting donations to help women find safe places to meet and ways to stay connected.

We’re closely monitoring the situation unfolding in #Afghanistan. Our team is safe. They are very sad, but calm, and sheltering in place. We are so proud of them and the work they do serving #afghanistanwomen and their families across the country. 1/6https://t.co/MQ0IDYoqRy

Afghan Women and Children and Jalala foundation have teamed up to protect women and children fighting to survive following decades of war.

Afghan Aid is providing urgent assistance to men, women and children affected by the conflict.

Australia could help by implementing a one-off humanitarian intake of vulnerable Afghans, which is the suggestion made by Arif Hussein, a human rights lawyer with the Refugee Advice and Casework Service and Zaki Haidari, a refugee from Afghanistan in the Sydney Morning Herald. To support that plight, email/call/mail your local MP.