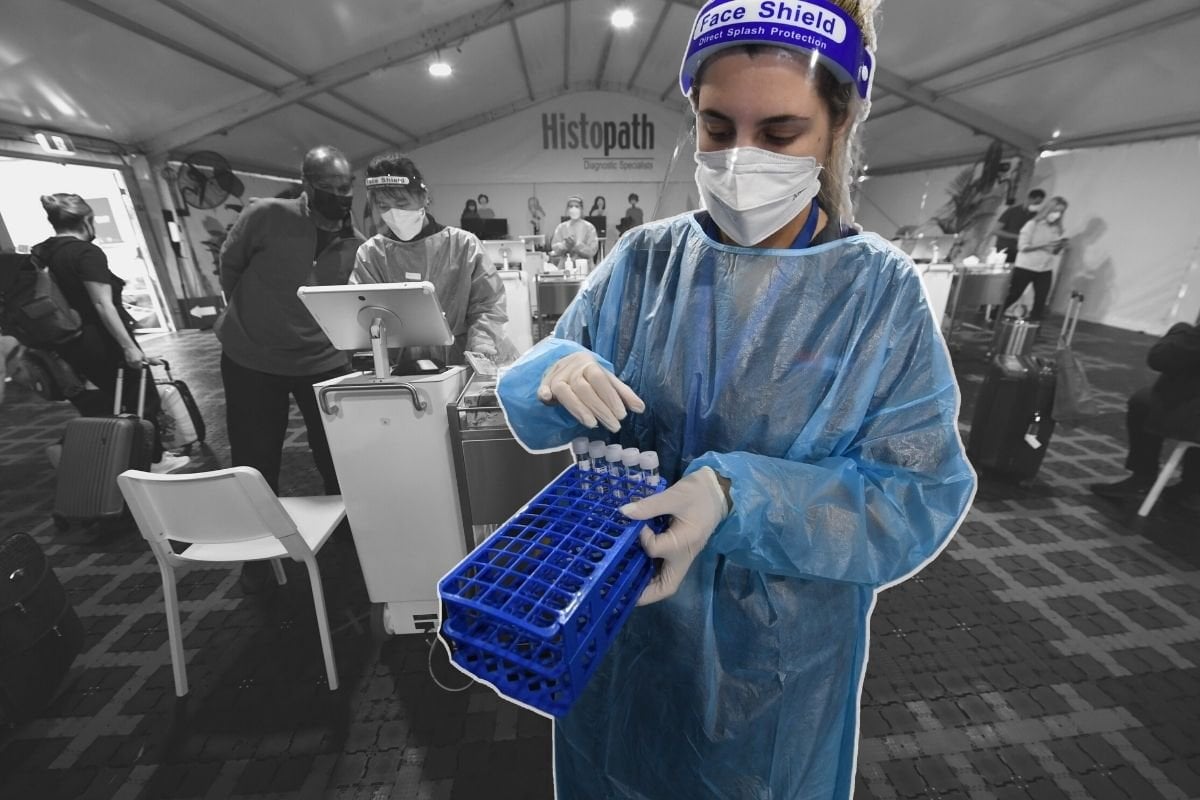 If you glanced at a TV or news website this weekend, you would have seen some terrifying headlines all featuring the word 'Omicron.'

That's the name of the new variant of COVID-19 that has popped up, prompting countries around the world — including ours — to enforce new travel restrictions.

Given COVID-19 has ruled our lives in the past two years, any mention of the word 'lockdown' or 'restriction' or 'new variant that might not respond to vaccines' is scary.

In response to Omicron concerns, any international arrivals into Victoria, ACT and NSW will now be required to self-isolate for at least 72 hours, regardless of vaccination status. https://t.co/DqnuAIwP60

I didn't read all the details on the weekend. I couldn't bring myself to. It meant that I just saw the sensationalised headlines that, without any context, can very much feel like we're at the end of the world.

But when you actually do read the detail and listen to the experts, it's relieving, not worrying.

Dr Angelique Coetzee, chair of the South African Medical Association, was amongst the first to spot the Omicron COVID-19 variant.

She says the panic we've seen from countries closing down travel avenues is unnecessary, because even though the new variant appears to be highly transmissible, "we don't see severely ill patients."

'The hype that's been created currently out there doesn't correlate with the clinical picture.'

A South African doctor who was amongst the first in the country to spot the Omicron Covid-19 variant says the UK has panicked unnecessarily. pic.twitter.com/ZywuKSEe3H

Speaking to Reuters, Dr Coetzee, said that on November 18, she noticed seven patients at her clinic who had symptoms different from the dominant Delta variant, albeit "very mild".

"None of them so far have admitted patients to surgeries. We have been able to treat these patients conservatively at home," she said.

Almost half of the patients she treated were not vaccinated, and so far those presenting with Omicron hadn't experienced a loss of smell or taste, or a major drop in oxygen levels.

"The most predominant clinical complaint is severe fatigue for one or two days. With them, the headache and the body aches and pain," she explained.

As Graeme Codrington, a South African futurist and strategy consultant, points out, his country has some of the most sophisticated and advanced infectious diseases infrastructures in the world and therefore it's no surprise that their medical systems are identifying new variants.

He has criticised countries imposing travel bans on South Africa, writing on Linkedin: "This new COVID variant has been found in New Zealand, England, Brazil, France, India, Indonesia, the Philippines and other places.

But now that we know of its existence, of course, the biggest fear is that it's a new and improved Delta that will shut down the world yet again.

However, it's important to remember that new variants aren't just a possibility, they're an inevitability.

Watch: How to talk to anti-vaxxers. Post continues after video.

"It is the nature of RNA viruses such as the coronavirus to evolve and change gradually," said Stuart Ray, M.D., vice chair of medicine for data integrity and analytics at Johns Hopkins University.

“All RNA viruses mutate over time, some more than others. For example, flu viruses change often, which is why doctors recommend that you get a new flu vaccine every year," added Robert Bollinger, professor of infectious diseases at Johns Hopkins University.

The WHO classified Omicron as a “variant of concern” because it has a wide range of mutations. It suggests vaccines and treatments could be less effective. That's a scary possibility. And it makes for scary headlines.

But the early indications are that it's not going to be as deadly and that's really, really good news.

As our own Dr Nick Coatsworth, a former federal deputy chief health officer, told the Today Show, "If this is milder than Delta, you actually want it to spread within your community.

"You want it to outcompete Delta and become the pro-dominant circulating virus ... it could be that we want Omicron to spread around the world as quickly as possible."

"It could be that we want Omicron to spread around the world as quickly as possible. If this is milder than Delta, you actually want it to spread within your community."

Dr Nick Coatsworth has said Australians should not be panicked about the Omicron variant. #9Today pic.twitter.com/4f0R0ezqLm

Of course, there's still a lot of research to do. But early indications suggest this variant is COVID in a milder form. And even though we're watching countries behave reactively right now, we can hardly blame them given how much COVID has ravaged their populations and economies.

Until they have that research firmed up, they're going to play it safe.

The other good news is that we've already worked out how to make COVID vaccines, and vaccine makers are already pivoting their efforts to combat the new variant: designing new boosters that anticipate strain mutations, and developing Omicron-specific boosters.

Pfizer and BioNTech have confirmed a vaccine tailored for the Omicron variant, if needed, could be ready to ship in approximately 100 days.

We should be aware and on alert - but let's not panic.

B
breeg 6 months ago

Reply
Upvote
This is what I call journalism. Thank you Mamamia for reporting this in a thoughtful and rational way. I had been avoiding the news too because it made me panic but your headline drew me in rather than scaring the crap out of me!
C
cat 6 months ago