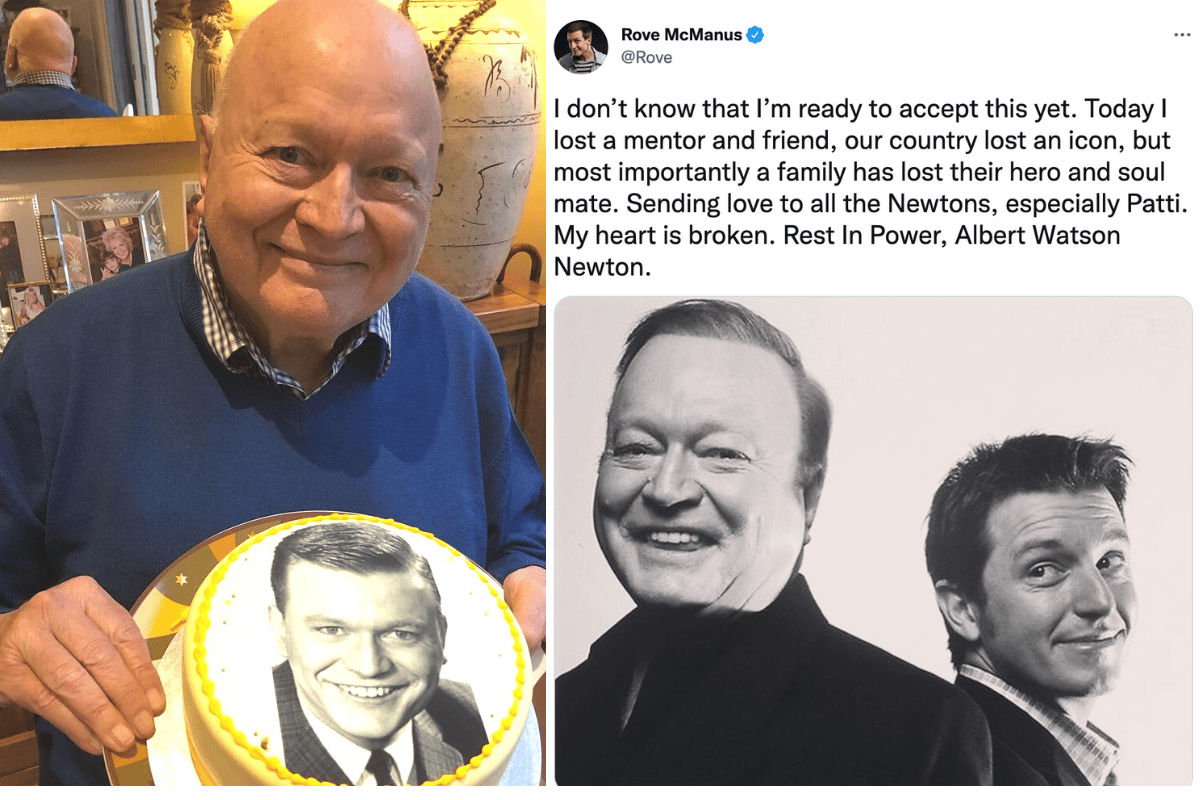 Bert Newton has passed away at the age of 83.

The Australian entertainment icon died while undergoing palliative care at a private clinic in Melbourne.

He leaves behind his wife of 47 years, Patti, two children and six grandkids.

From the likes of Australia’s most well-known politicians to Aussie A-listers, a wave of people have come forward to share memories and stories of the great Bert Newton.

Watch: Bert Newton presents at the 2018 Logies. Post continues below.

“Australia loved Bert. There will never be another like him. Four Gold Logies, hosting the Logies on 20 occasions and entertaining Australians for over half a century,” Prime Minister Morrison said in a statement today.

“Bert could give and take a joke. He could laugh at himself, I’m sure that’s what made Australians warm to him as much as we did. Even when a joke misfired, he had that ability to scramble in a way that made us laugh, and put everyone at ease.”

“Australians also understood his steadfast love of Patti, and her steadfast strength.”

“To Patti and the family, Jen and I send our love, and we send the country’s love as well.”

“Rest in peace Bert. Thank you for the memories and for being a brilliant Santa xx Our thoughts are with your beautiful family,” said Emma Watkins, the recently retired Yellow Wiggle.

I don’t know that I’m ready to accept this yet. Today I lost a mentor and friend, our country lost an icon, but most importantly a family has lost their hero and soul mate. Sending love to all the Newtons, especially Patti. My heart is broken. Rest In Power, Albert Watson Newton. pic.twitter.com/lzp3AaG51T

“What a loss. There was no one else quite like the incredible Bert Newton. To this day I pinch myself that I was lucky enough to sit beside him as a young reporter once a week on Good Morning Australia,” Angela Bishop wrote on Instagram.

“You never knew what he was going to say, but you knew you were going to laugh. He made every guest shine, and supported those in the biz with loyalty and opportunity.”

“This pic was taken at a 2013 production of Grease where he played Vince Fontaine - he joked that my Mum would probably want her hair back at the end of the season.”

“The absolute end of an era. We all grew up with Bert. The ultimate showman. Thank you for giving this young singer a chance on your show,” David Campbell wrote on Twitter.

“He was the blueprint for how to host a show and be relaxed in front of a camera. Heck, he wrote the blueprint,” he wrote in an article today.

“On behalf of many performers, thank you Bert. You were our hero and cheerleader. This industry was built by, and made better by you. On behalf of the Australians, thank you for making us laugh until we cried anytime you were on the box.”

Listen to the latest episode of Mamamia's The Quicky, the podcast that gets you up to speed on the top stories, then deep dives on one topic you want to know more about. Post continues after audio.

“Bert Newton was the best. Years ago when my friend and comedy colleague Lynda Gibson was dying of cancer, we had a fundraising comedy ‘roast’ for her. Bert turned up at HiFi bar in Melbourne and paid homage by removing his ‘rumoured’ toupee and revealing his total baldness. It meant the world to us,” Denise Scott wrote on Twitter.

Special energy last night as Elizabeth Chong AM—90—paid tribute to Bert Newton as part of her performance in @CAAPerformance’s Double Delicious for @OzAsiaFestival.

“I am sobbing and absolutely heartbroken that my darling friend Bert has passed. He was such a loyal, wonderful, kind man who supported me in my entire career - through good times and bad. He was an absolute icon. There will never be another Bert.”

“So sorry to hear: Bert ... what a fabulous man. An icon to Australia. Mark and I send our love to you Patti and all the family. At Mark's show tonight he sang a tribute for Bert,” Lisa Curry wrote on Instagram.

“Farewell Bert Newton. What a marvellous life on TV and stage. A standing ovation to you, and our love to Patti and the family.”

Bert was the guy we would all talk about the next day at school after the Don Lane Show. He was the funny guy who hosted the Logies when I was growing up. 20 times. Years later I would host it once and I got to introduce him and it was a really big deal for me. Goodnight Bert.

Just found this card I got from Bert 20 years ago, when he was working with Kelly Nestor. He was the King.. And so, so funny. #BertNewton #RIPBert pic.twitter.com/MfOFfIqkPK

“This week just gets sadder with the passing of Australian TV icon Bert Newton. I had the absolute honour of sharing a stage on occasion with Bert and was able to step back and watch a star at work. The void he leaves behind is immeasurable.”

Never got to meet #BertNewton but he was generous enough to offer me a reply when I was a kid seeking advice on how to break into TV and journalism. A simple acknowledgment, that went a long way, and made me feel seen #Bert pic.twitter.com/9q8i5GnUnD

“Very sad! VALE Bert Newton RIP. Sending love to you all and thinking of you, Patti.”