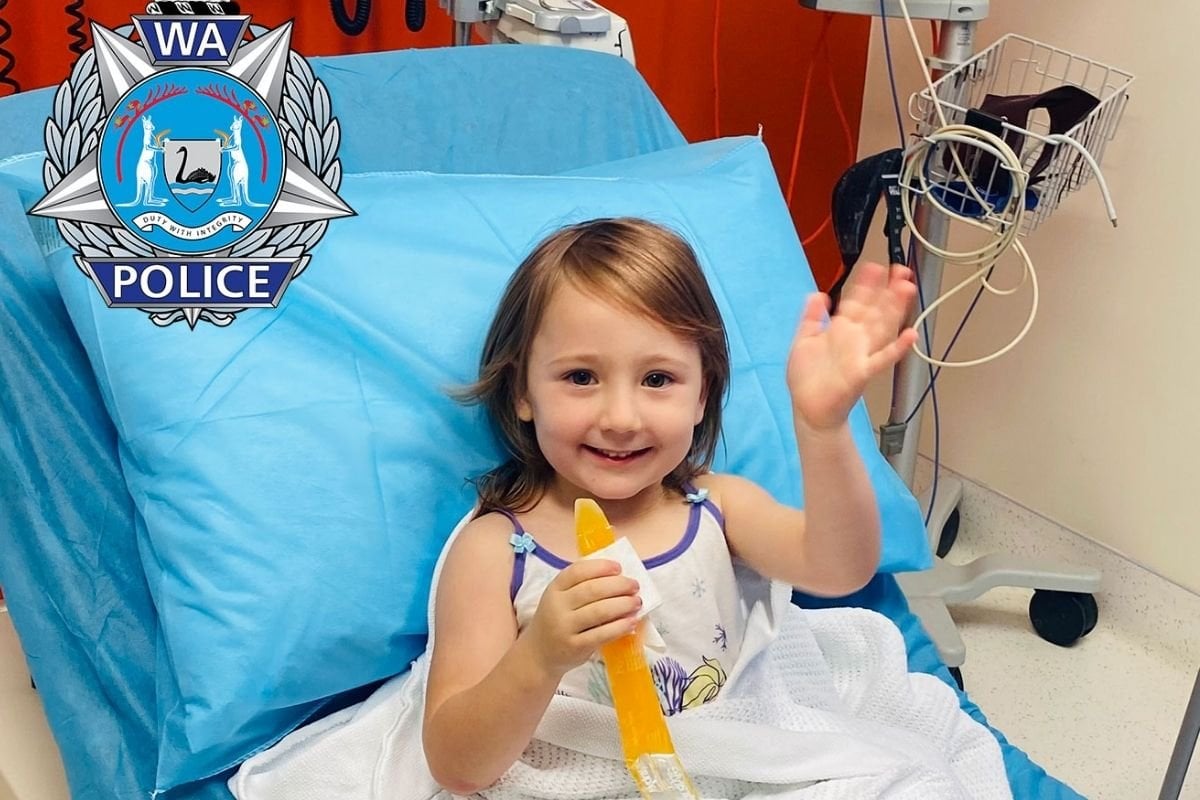 For the past three days, Mamamia, along with every other media publication in Australia, has been reporting on the incredible rescue of Cleo Smith.

The four-year-old girl went missing from her family's tent while camping at the remote Blowholes campsite in Western Australia. Eighteen days later, she was discovered by police in a locked Carnarvon home.

It's an extraordinary story. One that has captured the hearts of not just Australians, but people around the world.

As days turned into weeks after Cleo's disappearance, the worst was feared. Which made seeing her little face in the arms of police officers and smiling from a hospital bed that much sweeter.

Watch: The moment Cleo was rescued.

On Wednesday, we were buoyed by the return of a little girl to her family.

But in the days that have followed, the coverage and comment surrounding this story has started to morph into an all too familiar media circus.

It's starting to feel a bit icky, and as a news journalist who has covered cases like this over the last decade, I can explain why.

There is a difference between reporting the facts of this story, and turning it into salacious tabloid fodder.

At Mamamia we covered Cleo's disappearance, we covered her rescue, we republished the photos and videos of her shared by WA Police and the arrest and subsequent charges against the man accused of snatching her.

We wrote about the complex feelings parents of other missing kids might be feeling reading this news, and on our podcasts we spoke about how heartwarming it was to see Cleo reunited with her family.

What we haven't done is publish paparazzi shots of her family.

We haven't made assertions about the accused based on photos found on his social media.

We aren't trying to work out what happened to Cleo in those two weeks she was missing.

These are the lines that we draw. They might sound subtle, but they're the difference between reporting on the facts of an important story in the news cycle, and invading a little girl's privacy unnecessarily.

It's not the media's job to draw conclusions and share unhelpful detail while police are still investigating.

It's also not the public's right to see Cleo's first moments after being rescued. WA Police have shared some of those intimate moments, with permission from the family we assume, because they know the public is invested in this story.

"My name is Cleo." pic.twitter.com/xiy59x4kjP

But the problem is, the public and the media that feeds them get greedy. They want more, more, more. Especially when the story is so unusual and incredible — and they've already been afforded a certain level of access.

It's why you're seeing headline after headline unpacking and unravelling every detail even remotely linked to Cleo Smith and her alleged attacker.

We're seeing blanket coverage and analysis across TV, radio, and online. We're even seeing cartoons of little Cleo pop up in the newspaper.

When it all mixes together and forms this huge explosion of coverage, it's a lot. It's hard to know what you should and shouldn't be consuming.

As child psychiatrist Louise Newman wrote for The Conversation, "the first priority after finding the child is to immediately re-establish a sense of safety and stability, and to reunite them with their family.

"The most important thing is to avoid intrusive, probing questioning straight away as this can be frightening and distressing. It’s a normal response for the child to try to not think about what they’ve just been through."

A media scrum is the opposite of stable.

It's the exact definition of intrusive and probing.

We are not owed a front-row seat to Cleo's recovery. And as Louise explains when talking about how adults should "listen, not probe" when interviewing returned missing children —  the same should apply to the media.

We can report. We should be reporting. It's an important story to tell, and the police and Cleo's family are sharing details they are happy for us to publish.

The issue arises when the media - and the public that demands it - probe too far.

Reply
Upvote
1 upvotes
I agree, we need to back off. It was important to share her photo while she was missing but now that she is found,  her family needs and deserves privacy to deal. I agree with the point of this article but there are two articles on the Mamamia website with her photo at the forefront. We all need to back off, let this little girl and her family return to normal life otherwise we are likely adding to her trauma. She will be able to google this in the future. I can’t even watch TV without hearing all of the stories and speculation. It needs to stop now, her story is not our entertainment.
News
General
Opinion
True Crime
Politics
Sport
Explainer
Entertainment
Celebrity
Reality TV
Movies
TV
Books
Rogue
Royal
Lifestyle
Beauty
Fashion
Weddings
Home
Wellness
Health
Fitness
Travel
Food
Parents
Before The Bump
Pregnancy
Baby
Kids
Teens
School
Parent Opinion
Work & Money
Money
Finance
Career
Lady Startup
Relationships
Sex
Dating
Separation
Friendship
Family
Real Life
Couples