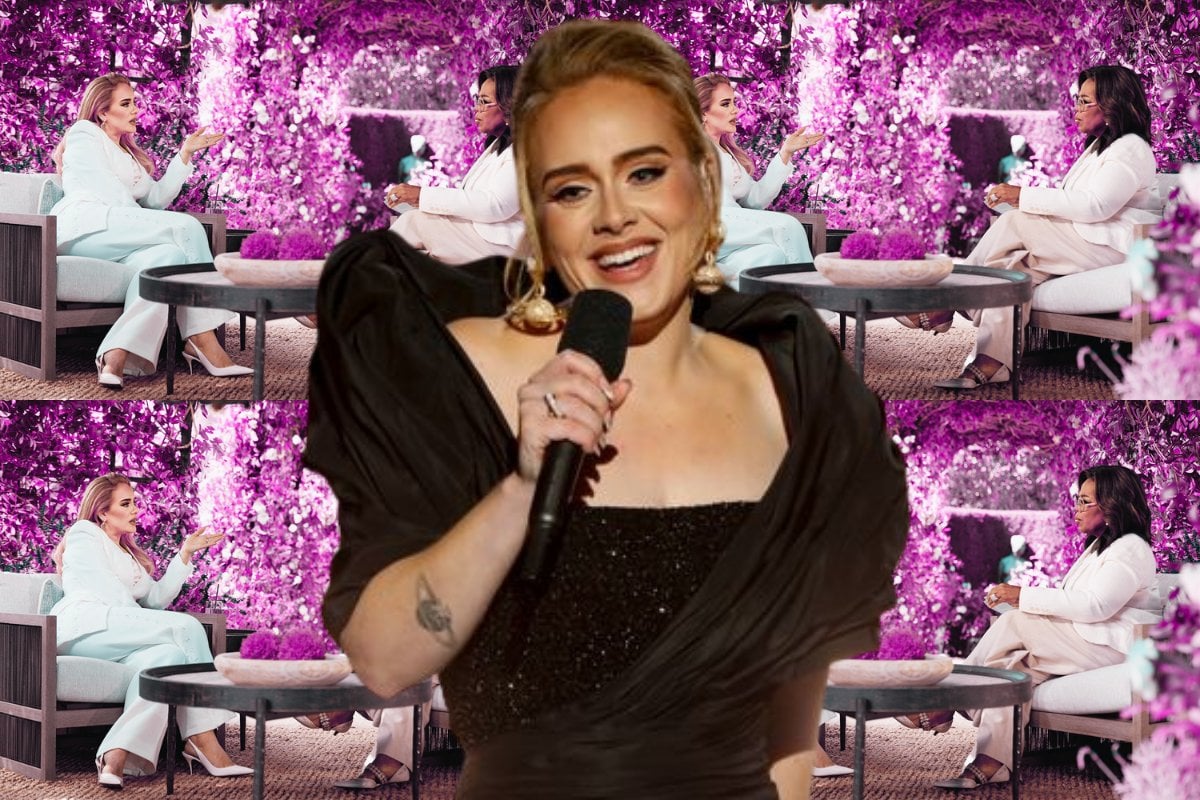 Adele's much anticipated fourth album, 30, is set to be released on November 19.

On Monday, Adele performed some of her greatest hits and three new songs from 30 at an exclusive concert called One Night Only. She also sat down with Oprah Winfrey, in her rose garden, to talk about the album, the reaction to her weight loss, and life after divorce.

Watch the trailer for Adele's One Night Only. Post continues below.

Here are the biggest moments from Adele's One Night Only concert and interview:

Adele is 'embarrassed' that her marriage didn't work

"I've been obsessed with the nuclear family my whole life because I never came from one. In all these movies and all these books, when you grow up reading them, that's what it should be. I just, from a very young age, promised myself that when I had kids, that we'd stay together. We would be that united family. And I tried for a really, really long time," she said.

Later in the interview, Adele explained that she was embarrassed that her marriage didn't work.

“It may seem like I don’t now, you know, it’s almost like I’ve disrespected it by getting married and then divorced so quickly,” she said. “I'm just embarrassed that I didn't make my marriage work. You know?"

The singer admitted she had a 'complicated' relationship with alcohol

During the interview, Oprah asked Adele whether she thought she had a fascination with alcohol.

“Yeah, because it took my dad from me," Adele responded. She then explained she stopped drinking after her divorce.

“Not at the beginning. At first, I was probably keeping the alcohol industry alive."

Shortly before he died, Adele’s father admitted to her he hadn’t listened to anything but 'Hometown Glory,' one of her first songs, because "it was too painful".

“So I forced him to listen, and we both cried,” she said.

“And then him sort of really understanding my child wounds through my song was amazing for me and him… And then when I played him the album–by then, he’d listened to all of ’19,’ all of ’21,’ all of ’25’–and my mum was helping to look after him towards the end as well. And his favourites were all of my favourites, you know, which I thought was amazing.”

Adele told Oprah she started working out to "centre herself" after her divorce.

“Once I realised I had a lot of work to do on myself, I stopped drinking and I started working out a lot... to keep me sort of centred," she explained.

The 'Easy On Me' singer said some of that work was learning how to deal with the “terrifying anxiety attacks” she suffered after her marriage ended.

“I had the most terrifying anxiety attacks after I left my marriage. They paralysed me completely and made me so confused because I wouldn't be able to have any control over my body, but I was aware of that happening because it was kind of still very much there while my whole body was just like, on another planet it felt like," she explained.

The singer went on to explain that she realised the only time she didn't feel anxious was when she was at the gym, so she ramped up her workout sessions as a result.

“It became my time,” she said. “Me having a plan every day... having these sort of pins in my day, helped me keep myself together.”

There was a "moment" when she realised she wanted a divorce

“I do remember one of my friends, we were all were answering these questions in this very bougie magazine. And it was it was something like, ‘What's something that no one would ever know about you?’” she remembered. “And I just, I just said it in front of three of my friends. I was like, ‘I’m really not happy. I'm not living. I'm just plodding along.’”

The singer then referenced one of her lyrics from her song 'Love In The Dark' which read, “I want to live and not just survive.”

“I've definitely felt like that,” she said. “But it was when I made it known to my own friends who thought I was really happy that actually I'm really unhappy and they all gasped. I felt like it was from there that I was like, ‘What am I doing? What am I doing it for?’”

She isn't surprised by the reaction to her weight loss

Adele told Oprah she “wasn’t bothered about [weight] at all" and her new lifestyle was all about getting her "mind right".

But she's not surprised people are focusing on her weight loss and her body.

“I’m not shocked or even fazed by it,” she said. “Because my body has been objectified my entire career.”

“I was body positive then, and I’m body positive now, but it’s not my job to validate how people feel about their bodies ... I’m trying to sort my own life out.”

Adele shared the meaning behind her new song 'Hold On'

In one part of the interview, Oprah asked Adele what the meaning was behind her new song 'Hold On'.

"Sounds like you were in the dark, dark, dark hours there," she told the singer, before launching into the lyrics. "'I swear to god,' you say, 'I am such a mess. The harder that I try, I regress / I am my own worst enemy / Right now I truly hate being me / Everyday feels like the road I'm on might just open up and swallow me whole / How do I feel so mighty small when I'm struggling to feel at all.'"

"What was going on there? What was happening?," Oprah asked the singer. "How did you keep the faith when you were at your lowest point? What were you holding on to?"

Adele told Oprah the song was inspired by the advice she had received from friends during some of her lowest points in life.

"My friends always would say, 'Hold on' when I would feel like… the lyrics in the verse. But it was just exhausting trying to keep going with it," she explained.

"So many people know what I'm talking about and I feel like that as well. I juggle those things as well. And I just felt like not doing it anymore. And also trying to... move forward, but like with intention. Not just trying to get out of it for no reason. My feet hurt walking through all of that concrete."

Adele told Oprah that her new relationship with sports agent Rich Paul is the first time she's "loved [herself] and been open to loving and being loved by someone else."

"He's hilarious. He's very, very smart," she told Oprah. "It's quite incredible watching him do what he does. And just the easiness of it. It's been very smooth."

This was the first time Adele's son saw her perform live

Before the concert, Adele shared on Twitter that she's "never been so nervous in my life" because it was the first time she would be performing in front of her nine-year-old son, Angelo.

"The most beautiful venue I’ve ever played. Thank you to everyone who made it possible. To Oprah for allowing me to tell my truth lovingly in a safe space. The whole thing was pretty overwhelming, I’ve seen it twice and cried my eyes out both times," she wrote on Twitter.

"Having been on such a rollercoaster the last few years and then the pandemic, it was hard to imagine being on stage singing again ever. So the fact that I got to and also got to sing my new songs, has me feeling a million things at once!

"It was also the first time my son saw me perform and I’ve never been so nervous in my life," she added.

Adele told Oprah she's open to having more children but would also be happy if Angelo was her only child.

“I'm definitely open to it. I would like more children," the singer responded when Oprah asked her about her plans to have more children. "It wouldn't be the end of the world if I don’t, because I had Angelo but yeah, I think so."

You can watch Adele's One Night Only at 7pm on Sunday, November 21 on Channel 7 and 7Plus.