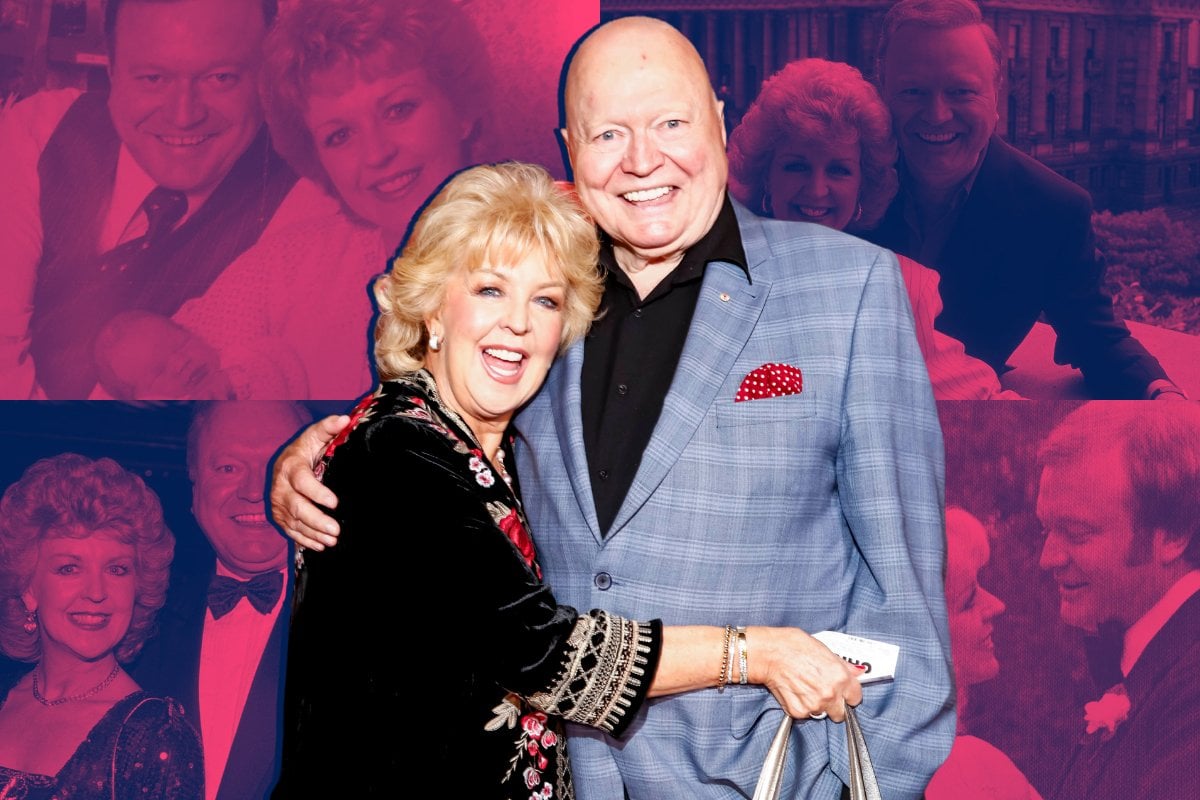 In January 1974, a dishevelled Bert Newton rushed onboard a cruise ship in New York City.

He made it just in time for the ship's voyage to the Caribbean, but his bag did not.

Armed with just the clothes on his back, he set about finding the woman he'd come to surprise: Patti McGrath.

Patti was working as an entertainer on the ship, and was due to perform with her group that night. At the end of the performance, Bert went to the bathroom, leaving his cigarettes and gold lighter on his table.

When he returned, Patti was there waiting for him, as she had recognised the lighter.

Bert and Patti first met when they were radio child stars. They stayed in contact throughout their teens and early 20s before working together at Channel Seven.

Then Patti moved to the UK to work on cruise ships. It was three years later that Bert turned up onboard the QEII.

The ship had sailed into Martinique in the Lesser Antilles when Bert confessed he'd come to ask her to marry him.

"Oh," Patti replied, and Bert said he didn't think it was working and that he should probably go home.

"Well, what would you have said if I'd asked you?" he asked, to which Patti said he'd have to ask her to ever find that out.

So he did, and she responded: "Yes, that would be great, thanks."

Bert, the 36-year-old bachelor, and his 29-year-old bride married on November 9, 1974, in a church ceremony surrounded by members of the public standing on their car roofs and on top of each other's shoulders to catch a glimpse at the couple, who were by that time already well on their way to becoming Australian TV royalty.

In January 1977, the couple welcomed their first child, son Matthew Newton. Their daughter Lauren Newton was born in 1979.

Matthew grew up chasing a career in entertainment like his parents and started acting young. He portrayed John Barton in 2000's Looking For Alibrandi and was preparing for a move into radio in 2006, when allegations of domestic violence against his ex-girlfriend, actress Brooke Satchwell, halted his career.

He pleaded guilty to common assault after prosecutors withdrew three more serious charges including assault occasioning actual bodily harm and stalking and intimidating his ex. He got off because the judge found he was a "gentleman" who was unlikely to hit a woman again.

In 2010, Rachael Taylor ended her relationship with the actor after an altercation in Rome in which court documents detailed how Newton allegedly left Taylor with multiple injuries.

She later filed an AVO, alleging over a year of physical, verbal and emotional abuse. He was subsequently admitted to Sydney's Northside West Private Clinic for treatment.

He later moved to New York City, far from the prying eyes of the Australian media who reported both his criminal history and road to redemption with equal focus.

Since his move to America, Matthew has carved a career for himself as a director. He lives with his wife Catherine Schneiderman, the daughter of New York Attorney-General Eric Schneiderman, but they have kept their relationship very private.

In 2016, Bert told the Herald Sun he was "overjoyed" by his son's turnaround.

"I have always prayed for a happy ending, and I think it has arrived," he said.

"He is happy, he's doing good things, and that's the most important thing. I'm overjoyed. He is a great writer, he is a great director and a fine actor and he is happy."

While Matthew lives abroad, Bert and Patti's life in Melbourne is kept extremely busy thanks to daughter Lauren and her six children, born between 2008 and 2020, with husband and former Olympic swimmer Matt Welsh.

Bert explained to the Herald Sun in 2016, when Lauren and Matt had four children, how much they meant to him.

"They wouldn’t realise it at the moment, but they have made this one of the happiest times of my life.

"There is that old saying, the wonderful thing about being a grandfather, or grandparent, is that you give the kids back. But in the case of Patti and myself, we don't want to."

He said they had "given me a new lease of life".

"I've been a very lucky bloke. I've had a career. I never realised when I started out I would be around as long as I have been. But towards the twilight years, it’s terrific to have such love from four wonderful little kids."

Maintaining such an enduring marriage is hard - especially when you're as well known as the Newtons are in Australia, and it has been far from smooth sailing.

In 1993, the couple were found to be $1 million in debt and near bankruptcy as Bert had a gambling problem, a scandal that made front page news at the time.

They recovered, and in 2015 Patti said the secret to their successful relationship was a sense-of-humour.

"I think you have to have a good sense of humour, that's something I do have, I'm always ribbing him about something. I know that he doesn't do the dishwasher very well, but the reason I know that is because if he did do it well, I'd ask him to do it more," Patti told Now To Love.

Patti told Now To Love the couple have spent a lot of time together, both at home and work, starring on TV across multiple decades.

But it was also important to maintain separate identities.

"You have to give one another a bit of space, we both have different interests," she said.

"Because we give one another space, and we're both very loyal to one another, it worked out very well.

"I look after him and he looks after me, that's what it is really all about.

"We lived and worked everything that was happening on television, we've spent a lot of time together. If anything happens to either of us, whichever one it is will find it very difficult because we've been in one another's pockets for well over 50 years," Patti said. 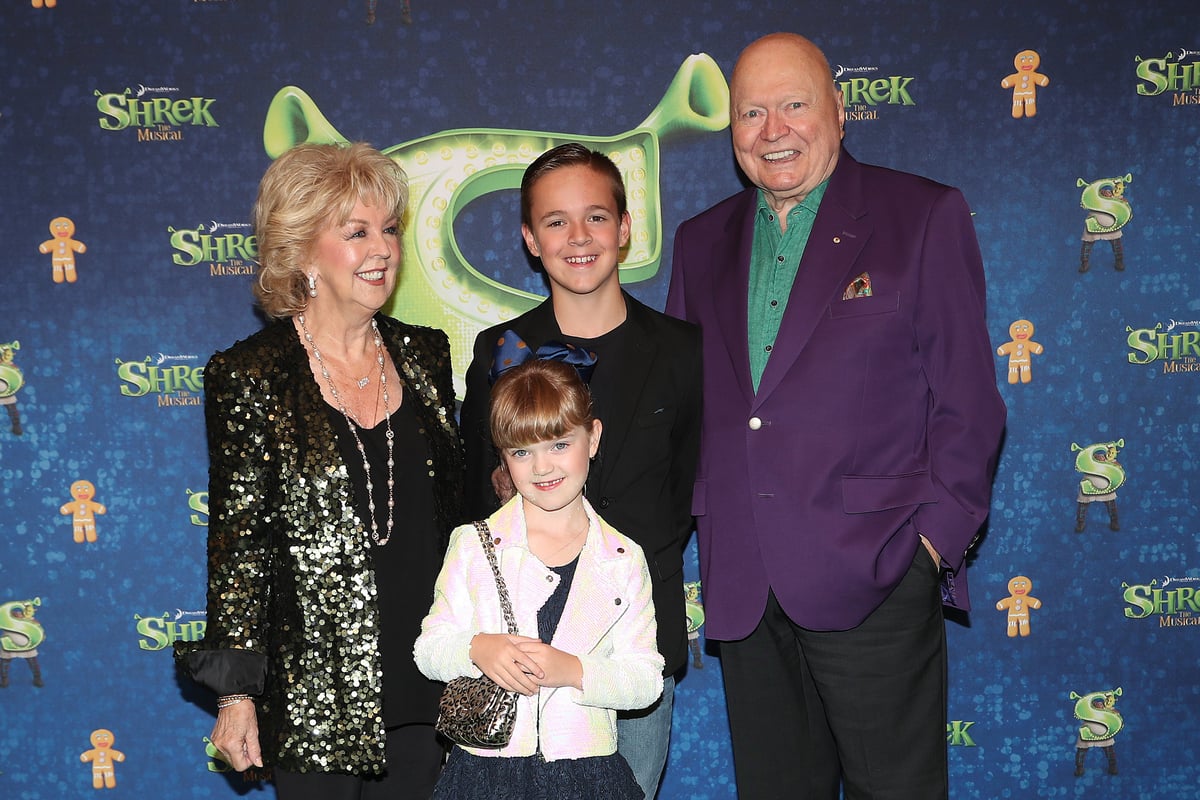 Bert has battled several health issues in the past, and spent more than a week in hospital for pneumonia in 2011.

A year later he faced a six-month recovery period after being released from hospital following quadruple bypass surgery.

Patti has also had her own scares, including two bouts of transient global amnesia, where she loses her memory for hours at a time.

Bert told the Herald Sun it is "the most frightening thing", but he really looked up to his wife for her strength and resilience.

In May 2021, Bert underwent a leg amputation following an aggressive infection on his toe which had started before Christmas 2020.

Entertainment reporter Peter Ford broke the news on-air on The Morning Rush with Sean and Kate, saying he'd been in contact with the Newton family.

"It got worse… he was seeing doctors and specialists and they couldn't seem to get it right, it kept on spreading. Basically, he was told last week, you have a couple of months to live, or if you have your leg amputated, you'll probably have a few years. So, he agreed to have the leg amputated on Saturday," Ford said.

He said it was a "life or death decision".

"It's a big decision for anyone to make, but it's also a practical thing, because they live in a two-storey place with the bedrooms and the bathrooms upstairs, so they're now having to convert the house downstairs because Patti doesn't want him to go into a nursing home," Ford continued.

"They said, 'We had a choice. Other people don't have a choice'. Bert wants to keep on living, because he adores Patti, his children and his grandkids, and he wants to have as much time as he can with them."

Speaking to 7News outside Melbourne's Epworth Hospital on May 10, Patti said her husband was in good spirits after what was "a very big day for everybody" on Saturday.

"He had a choice and his choice was to live," she said.

"His words were: 'Let's do this with a positive attitude.'"

Months after his amputation, Bert Newton passed away at the age of 83 on October 30.

The Australian entertainment icon died while undergoing palliative care at a private clinic in Melbourne.

I have very sad news ….
Showbiz icon Bert Newton has died at age 83.
It was remarkable career on TV, stage & radio. Sadly he didn’t get the last chapter he deserved. He was a great mentor & friend to me.
Condolences to Patti,Lauren,Matthew & extended family.

This was just one week ago exactly.
If it’s to be the last ever pic taken of you it’s a bloody ripper!
Smiling and with his adored grandkids.
He never stop fighting until the very end. pic.twitter.com/vzzSChdTSW

He leaves behind his wife of 47 years, Patti, two children and six grandkids.

Reply
Upvote
RIP Bert. All the love to Patti, Lauren, Matthew, Matt and the grandkids
what a beautiful last photo to have