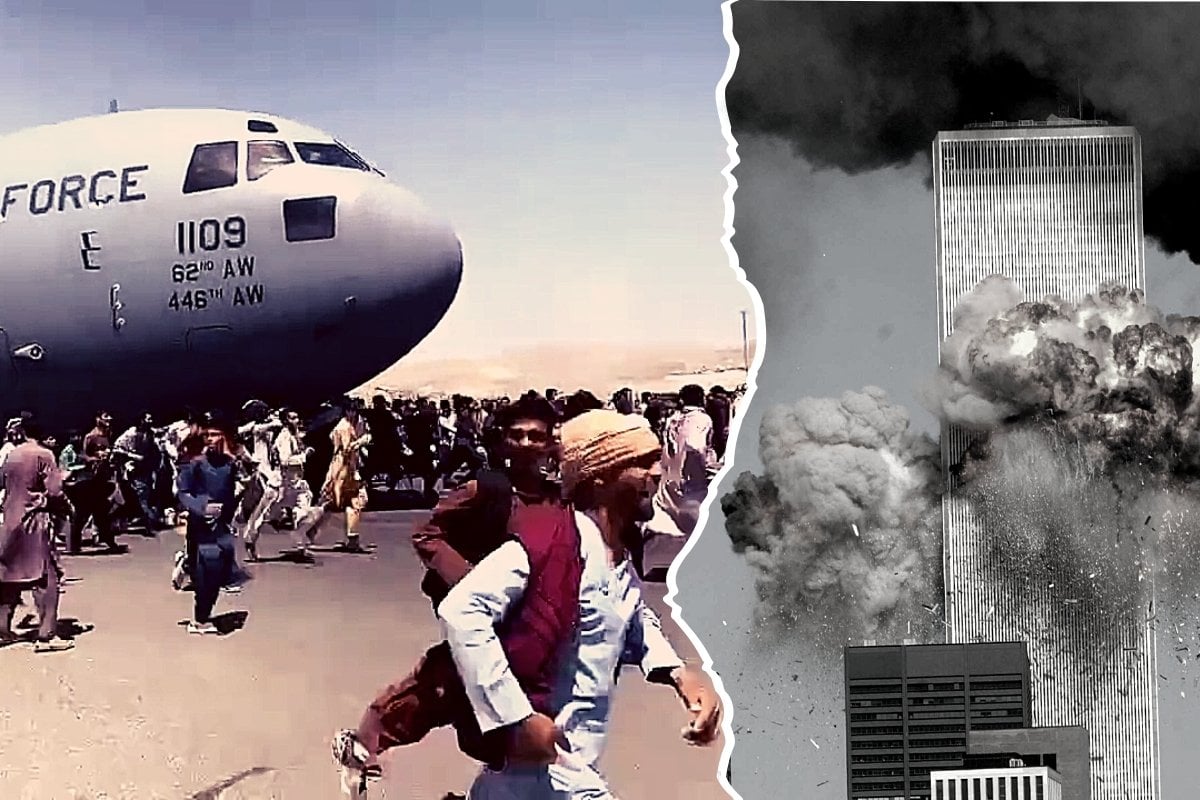 There are images that sear themselves into the memory. The kind that reach through the decades and become emblematic of a particular moment in history.

A naked Vietnamese girl running, crying from her smoking village, her skin scorched by napalm. An Australian child steering a boat away from Mallacoota's burning shoreline. A sailor planting a kiss on a stranger at the end of a war. An unimaginable act of terror that started another.

This week, those emblematic images come from Afghanistan, a country that this weekend fell, once again, under Taliban control.

A photograph taken at Kabul airport on Sunday shows 640 Afghani refugees crammed into the belly of a United States military C-17 transport plane, an aircraft designed to fly with half that number.

Most are men, many of whom likely aided the US in its battle against the Taliban in recent years. But women and children are scattered among them, too; one cradling a wide-eyed baby sucking on a bottle.

Then there's the footage.

Hundreds of Afghan people sprinting alongside another US military plane evacuating people from Kabul airport on Monday.

Some among the desperate throng attempt to wave down the pilots, pleading with them to stop. Others search for a way onboard the moving plane, even trying to scale the landing gear, choosing to risk their life thousands of metres in the air rather than endure one under their country's new government.

More footage, reportedly of the same plane shortly after takeoff, appears to show at least two bodies plummeting back to the ancient, sandy earth they were so desperate to flee.

It's familiar. Hauntingly so.

Twenty years ago next month, an Associated Press photographer named Richard Drew captured one of the defining images of the September 11 terrorist attacks on New York City. It was called 'Falling Man', and it immortalised an anonymous office worker as he plunged from the upper floors of the north tower of the World Trade Center while it crumbled and burned. Escaping one cruel death, he met another.

That man was just one of the 2,977 people killed that day when four hijacked passenger planes were deliberately steered towards targets across New York and Washington D.C.

Such was the ferocity of the attack that it became the catalyst for the US' military involvement in Afghanistan later that year.

The superpower's so-called 'War on Terror' sought to topple the Taliban-led government, which was hosting militants from al-Qaeda — the group responsible for the September 11 crimes. And with the aid of a coalition of NATO allies, including Australia, it did just that.

Listen: The Quicky speaks to two experts in international security to find out how the situation in Afghanistan deteriorated so quickly, and what we can do to help. Article continues after podcast.

But amid the coalition's recent withdrawal, the Taliban has returned.

Though the regime has promised not to exact revenge on those who supported allied forces, and though it has promised women will be afforded rights "within the limits of Islam", the memories of its oppressive five-year reign linger.

Memories of women forced to conceal their faces and bodies beneath burqas. Of girls aged 10 and over blocked from going to school. Of public executions by stoning at a soccer stadium. Of television, videos and music being forbidden. Of men beaten if they didn't pray five times a day or cut their beards.

The kind of memories people are so desperate to escape that they would cling to a moving plane.

With this new scene of terror have come these new images, ones sure to reach through the decades and capture a time when ordinary men were, yet again, left to fall.

A
anonymous 5 months ago

Reply
Upvote
What sends shivers up my spine the most about those airport scenes is how few women and children were there, trying to escape. Most of those rescued on the planes were men. The Taliban's abhorrent treatment of women is one thing but the treatment of women by ordinary patriarchal Afghan society is another. Let's keep in mind that Afghani women were up against it, before the Taliban marched back in.
C
cat 5 months ago

Reply
Upvote
1 upvotes
@anonymous this has actually been debunked-  evacuation flights are prioritising women and children, the US were doing emergency visas on the tarmac for female activists and journalists. If you look at the images from within the flights (rather than from the tarmac) there are lots of women, because they actually made it on the plane. Look for the full pictures though, because lots of places cropped them out.
A lot of women also fled Kabul before the Taliban arrived, because they always knew that women of marriage age would be in the most danger. Their male relatives stayed behind to see how it played out and to defend their homes and property, so they are the ones now trying to escape.
News
General
Opinion
True Crime
Politics
Sport
Explainer
Entertainment
Celebrity
Reality TV
Movies
TV
Books
Rogue
Royal
Lifestyle
Beauty
Fashion
Weddings
Home
Wellness
Health
Fitness
Travel
Food
Parents
Before The Bump
Pregnancy
Baby
Kids
Teens
School
Parent Opinion
Work & Money
Money
Finance
Career
Lady Startup
Relationships
Sex
Dating
Separation
Friendship
Family
Real Life
Couples