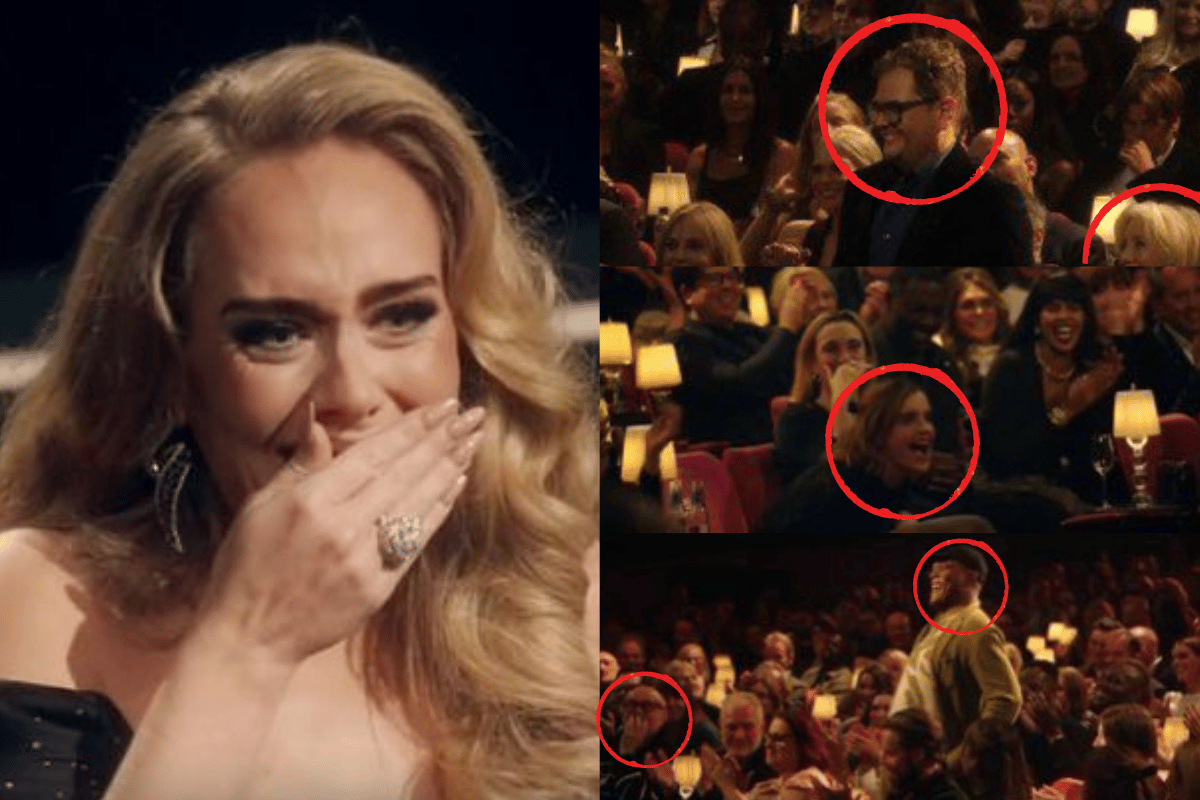 In case you're out of the loop and have somehow missed the hundreds of thousands of tweets and posts about Adele within the last few days (no judgement, I promise) - let me spell it out for you:

Adele is BACK, baby.

The 'Someone Like You' singer celebrated her return to the spotlight after a six-year hiatus - and she has done it with a bang.

Performing a star-studded show at the London Palladium on Sunday evening, she was surrounded by A-list celebrities, victims of the Grenfell massacre, those who worked tirelessly on the COVID frontline, as well as "friends, family, fans, her own personal heroes and heroines, fellow musicians, artists, actors, sportsmen and sportswomen..."

And it was just as chaotic as you could possibly imagine.

Watch a snippet of An Audience With Adele, where the singer reveals a few of her idols. Post continues after video.

Here are the best moments from An Audience With Adele.

1. Adele had a special visit from an old friend.

There was a particularly surprising reunion for Adele during the show that left everyone feeling emotional.

During the ITV special, Adele was asked by British actress Emma Thompson who the one person was that had supported and protected her as a child.

Sadly, they hadn't kept in touch but Adele shared that she had "really" gotten into literature because of the former teacher.

"She was so bloody cool, so engaging and she really made us care and we knew that she cared about us and stuff like that. She used to have all these gold bracelets on and gold sequins and I don’t know, she was just bloody cool and so relatable and likable that I really looked forward to my English lessons."

The moment turned from nostalgic to emotional when Emma Thompson informed her that Ms McDonald was in the audience, with her two children.

We all have that one teacher who changed our life… such a beautiful reunion! ❤️

The singer burst into tears when the teacher walked on to the stage, and told her: "You really did change my life."

Afterwards, Adele took to Twitter to speak about the special moment.

Home Sweet Home. I’ve always dreamt of doing An Audience With… There was so much love in the room for eachother, it felt like such a gig! Everyone was raucous and bang up for it! And my teacher Ms McDonald was there, it was just heaven ♥️ pic.twitter.com/N1LpkQbeoh

After the emotional reunion between Adele and Ms McDonald, the singer demanded her longtime friend Alan join the stage to cover 'Make You Feel My Love' while she touched up her makeup.

You can watch the hilarious clip for yourselves here.

Alan Carr being asked to become a temporary host of #AnAudienceWithAdele is an absolute scream pic.twitter.com/OYC41LGU86

3. We've never seen Emma Thompson dance so much in our lives.

Probably the most delightful side effects of watching Adele sing some of her most iconic tunes, was that we were also watching Emma Thompson dance her heart out.

To say she blew us all away at home would be an absolute understatement. But we weren't the only ones, with audience member Nick Grimshaw going onto Twitter to beg ITV to give the Love Actually star her own show.

I'm not a betting man but I think Rolling In The Deep is Emma Thompson's favourite Adele song. pic.twitter.com/MHUrwhPJ1E

The renowned actor was not the only star in attendance. Actors Idris Elba, Samuel L. Jackson, Emma Watson, model Naomi Campbell, singer Dua Lipa, rapper Stormzy and presenters, Jonathan Ross and Phillip Schofield were also there cheering the singer on.

4. Adele casually shaded "not all, but most" of her exes.

Alan Carr, along with a number of other celebrities, were able to ask a question to the 33-year-old singer, but the one that stuck out the most was quite possibly the shadiest of them all.

Before she belted out a beautiful performance of 'Rolling In The Deep', she was asked: "Famously, you write songs about your exes... if your exes wrote a song about you, what would it be called and what would it sound like?" he asked. "We wanna know everything!"

In response, she said: "It’d probably be called ‘No One Like You’, I imagine... And, erm... also, I can’t imagine any of them would really be able to do it, because most of them couldn’t even do a normal daily task... most of them, not all of them! So yeah, I don’t think they could get away with it."

If your ex(es) wrote a song about you, what would it be called?
Adele: No one like you 💅🏻 pic.twitter.com/A2F4UG9Wan

It was a good show - an incredible show, even.

I have you to thank for that, Adele.

And all I have left to say is, I'm definitely going to need another box of tissues after watching An Audience With Adele.