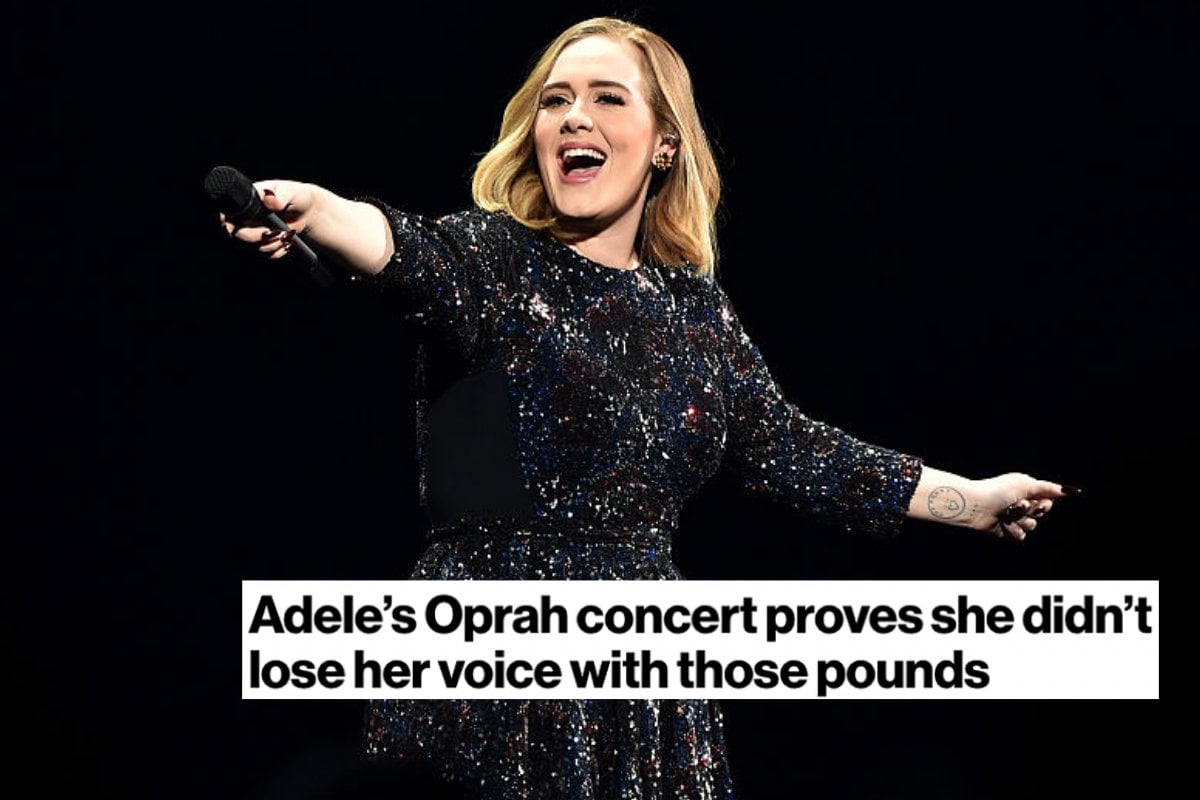 Earlier this week, a headline by The New York Post went viral. It read: "Adele's Oprah concert proves she didn't lose her voice with those pounds."

It was clearly written as clickbait, and it was playing into the stereotype that a woman's ability is tied to her looks.

As a plus-size woman I know what that is like, people constantly assuming because I'm not small, I must be sad, lazy or insecure. Of course, usually these opinions are made clear to me through micro aggressions not via headlines.

Stereotyping women based on their physical appearance is a tale as old as time.

Remember when Kelly Osbourne was seen as a quirky party girl at best and at worst as a joke?

Then she lost weight and was suddenly a respected style icon? (Btw she'd always had the same distinct style, she was just thin now.)

Of course, it's a trope thrust on women that extends beyond weight.

If she's blonde, she's not smart, if she wears glasses, she's nerdy, if she wears a low-cut top, she's promiscuous, if she's thin, she's attractive.

The list goes on and on, and I'd say pretty much every woman I know has at one point in their lives been pigeon holed because of these outdated and completely baseless stereotypes.

However, the 'fat' stereotype seems to bring out a particular amount of venom.

Society really does seem to believe that if fat people want to exist and not be ridiculed - they need to be incredibly talented in one area, they have to earn the right to be treated decently.

Otherwise they are just treated like an endless running joke. Don’t believe me? You only have to look at the jokes made at the expense of Monica Lewinsky during the Bill Clinton scandal to understand.

According to Bustle, David Letterman once joked, "President Bush has authorised the drop of 15,000-pound bombs on Afghanistan. I believe that is the heaviest ordered drop by a president since ... well, Monica."

Unless a bigger woman can somehow impress the public with her talent, like Adele did, she will be roasted.

I believe fat people often learn to be particularly skilled in one area as a survival mechanism.

They find solace in being extremely good at something - for me that is being funny.

I understood from a pretty early age that I may never be the right size, but I could tell the right joke and in turn gain acceptance.

Of course, the Lewinsky scandal was in the 90s, so surely things have become better. Well… not really.

Sure, the commentary may not be as blatant but the underlying themes are the same.

Treatment of celebrities is always interesting to watch because often it mirrors the culture at the time.

The coverage of Adele's recent weight loss, right down to the clickbait headlines, tells us a lot about how society feels about plus-size women.

Take the now infamous New York Post headline, it leans into the idea that the world genuinely believes a women's ability is effected by her weight. That somehow Adele's vocal ability could be tied to her waistline.

I know this kind of theory sounds outlandish, but it's actually just an uncomfortable truth, something we do seem to believe in collectively. Last year, when Rebel Wilson debuted a slimmer body, we saw a similar reaction.

Some people loved it, some people hated her transformation but everyone had an opinion and let me tell you words like ‘transformation’ and ‘new body’ were thrown around, left, right and centre.

Later she did an Instagram Live where she admitted that she was often told to gain weight for roles, assumedly not because there was a plot driven reason for her character to be larger, but because producers felt a 'fatter' Wilson would be funnier.

See, fat women are allowed to be funny!

Naturally, these kind of examples don't end with Rebel Wilson.

In the early 2000s, Star Jones, a popular host on the long running daytime talk show The View, famously lost a tremendous amount of weight. The thinner she got the more her popularity sunk with viewers - ultimately her contract was not renewed.

Once you hone in on weight loss, often their experiences are similar.

A remark you could tell bothered Hill and one that has since gone viral on TikTok, where creators have pointed out how that comment is actually fatphobic.

In 2011, when Hill famously lost a significant amount of weight after playing a slew of characters that were often the butt of the joke, Today published an article with the headline, "Is skinny Jonah Hill less funny than heavy one?"

This headline wasn't just click baited, the article actually debated if Hill would remain funny. It also referenced Seth Rogan and Ricky Gervais' weight loss and discussed if they were still as funny after losing weight. Yes, really!

I've encountered these kind of views being thrust on me in a much smaller way.

Some people assume it's hard for me to get a date.

Some are surprised I appear confident considering my size and most assume that I don't exercise. (I do for the record, and it's very tiring.) But fat just always has to equal lazy and slothful and definitely not sexy.

Obviously, I'm very aware that the New York Post was just trying to write a headline people would click on - and most of us can’t resist.

Clearly, as a society, we are fixated on people who lose weight, particularly women. We are quick to believe that weight loss will also lead to some other huge change - if you lose weight you won’t be able to sing anymore or suddenly you won’t be as funny.

On the flip side you will become more popular, more successful, more desired.

I encounter all these little judgements on a micro-level. A man once told me at a bar, I was “funny because I had to be,” and then alluded to my size. Interesting, right?

Maybe it’s true, maybe I had to become funny to avoid being bullied, or maybe I just always was funny? But it’s surprising how quick we are to judge someone and give them a whole identity based on the size of their jeans.

When Adele lost weight, everyone was going to talk about it.

But, what fascinates me, is how much people project this idea that Adele is now somehow ‘different’ because she has lost weight.

But weight loss is just that. You’ve shed a few pounds or kilos for whatever reason and unless you’ve also done some “inner” work, probably not much will change.

I’m not sure what the New York Post journalist, who decided to run with his Adele headline looks like, but it doesn’t really matter does it?

We need to understand as a society - maybe one journo at a time - what we weigh doesn’t actually amount to who we are?