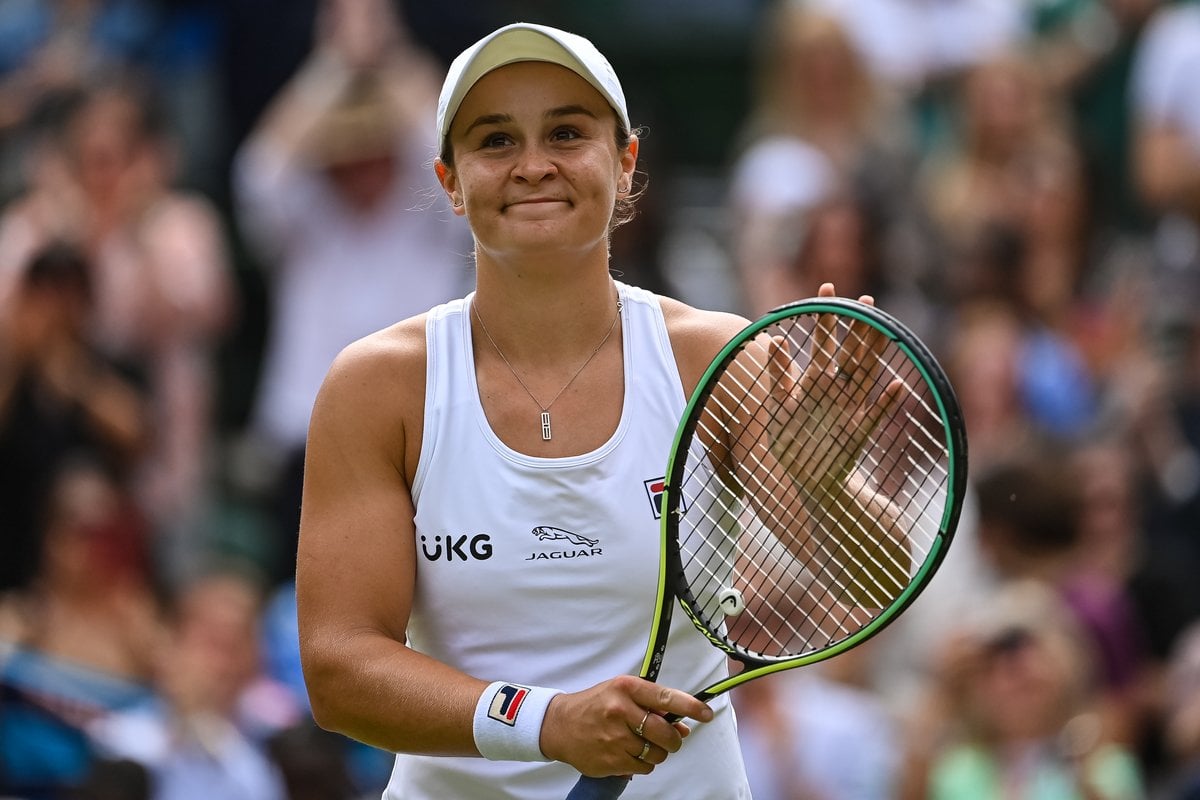 Ash Barty has made it through to the Wimbledon women's final — the first Australian woman to do so in 41 years.

Tonight at 11pm AEST, the women's number one will take on Czech star Karolina Pliskova in the hope of securing her second grand slam singles title.

Watch: What does it take to be an Australian sporting hero? Post continues below.

"I'm incredibly proud of myself and my team and now we get a chance on Saturday to live out a childhood dream," Barty said during the semi-final post-match interview on Friday.

"We laugh every day, we smile every day through sometimes the heartache and the best moments as well," she said.

"I want to share with them and I think, to lighten the mood is the most important thing in my day, coming out here and having fun. Because playing in front of a crowd like this, on a beautiful court, there's absolutely nothing better."

Over the course of Barty's career, the 25-year-old from Queensland has remained humble and grounded. There are no outbursts, no racquet-throwing, no disputes with umpires or opponents. In fact, she's regularly laughing and smiling on and off-court.

She credits her mindset coach with that attitude.

Ben Crowe works with athletes to make them better players and better people. Tonight, while audiences focus on the game and the results, he will watch to see how Barty's mind responds.

"When I'm watching athletes perform my role is to just see if there are any distractions — either from body language or decision making — and then post-match to critique that event and see where their mindset was at out there and discuss that and get that out of the athlete's head," he said during an interview with ABC's Conversations.

"If you're in your head, you're dead," he said. "So the goal is to be open and open-minded and to reflect, so that you can work on and grow for the next match."

Through his teachings, Crowe reminds Barty to separate herself from the game and not take a point or outcome of a match too seriously.

"Sometimes it's just not to overthink it and bring a light-hearted, carefree, childlike approach back to the game," Crowe told Sarah Kanowski. "She's at her best when she's enjoying playing."

And that's something you notice. Ahead of every match, Barty appears quite free and still has a sense of humour.

"She realises she's in control of her emotions and her feelings. And the words she sends from her conscious and unconscious mind, that determines how she shows up," Crowe said.

"She goes back to words which represent who she is when she's at her best... One of those words might just be 'calm', and that's what she focuses on."

She also conjures images from her childhood: "beautiful memories and images and visualisations that remind her not to take life so seriously and to celebrate that exciting, carefree, without-consequence journey."

Born in 1996, Barty grew up in Springfield, Queensland, with her parents Josie and Robert Barty and two older sisters, Sara and Ali. Her father is a proud Ngaragu Aboriginal man and her mother is of English descent.

She regularly credits her family for keeping her grounded.

Speaking to Mamamia in December 2019, she said, "The advice my parents gave me is to be a good person first and foremost – that’s what I still focus on today."

Tonight, while watching Barty hopefully secure her second grand slam singles title, take a moment to watch how even during the most important match she remains so calm.

"Ash is now very much in touch with who she is as a human being, less so the human doing," Crowe said. "And that can be a superpower."

The Wimbledon women's final will air at 11pm AEST and will be live streamed on Stan Sport.

Like a $50 gift voucher for your thoughts? Take our quick survey.