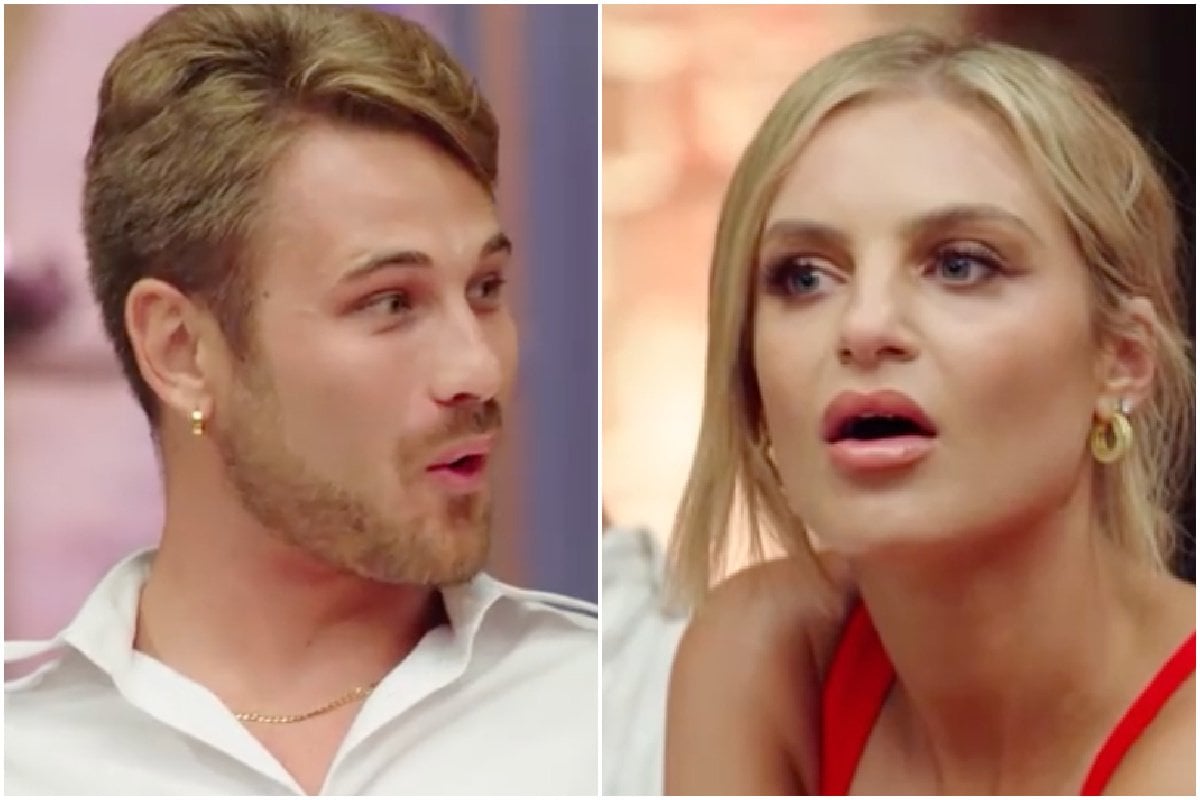 It’s the final (final) reunion (minus Andrew) Commitment Ceremony and SHUT THE HELL UP BECAUSE THE EXPERTS HAVE A TV AND YEAH THEY’LL BE REFERRING TO IT THROUGHOUT THE EVENING.

Immediately, however, it becomes clear that the experts intend to use the television to show the group flashbacks of their weddings and that’s not why any of us are here, John. Show everyone bitching about each other or we’ll hide the remote. 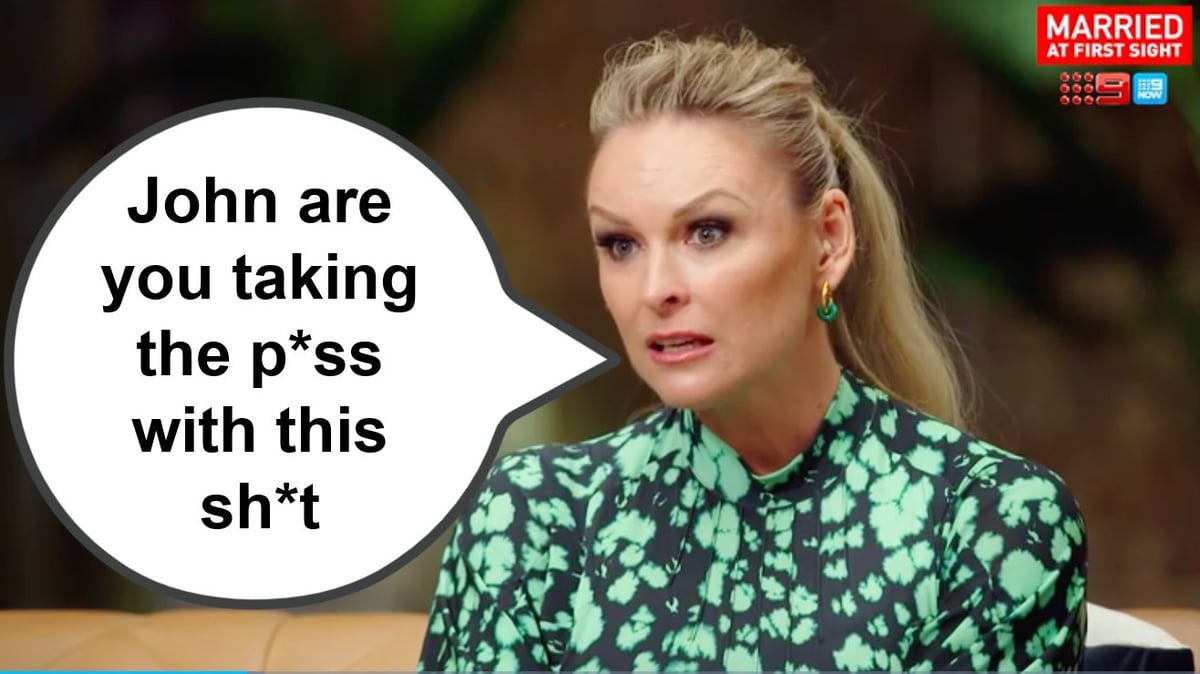 "Have some respect for people's time??"

Ella and Mitch are first up on the couch, and it turns out Mitch is doing very well ever since he was allowed to pursue a relationship without having a camera crew chase him every time he left the room.

The experts are gushing about how far they’ve come, and for the next several minutes we watch a montage of their upsetting love story.

Everyone watches Cody tell Selina that a) he’s not racist, and b) on an entirely unrelated note, he’s also not that attracted to her based on her race. So. Do with that what you will.

But when she’s finally given the opportunity to speak, Selina says she’s feeling “confused and silly” for feeling the way she does.

It turns out Cody decided to “call things” last night and wtf Cody.

The group shouts “WAIT, WHAT?” and we hear Matt be like “ohhhhhh nooooo” and mate we legitimately keep forgetting you’re here. 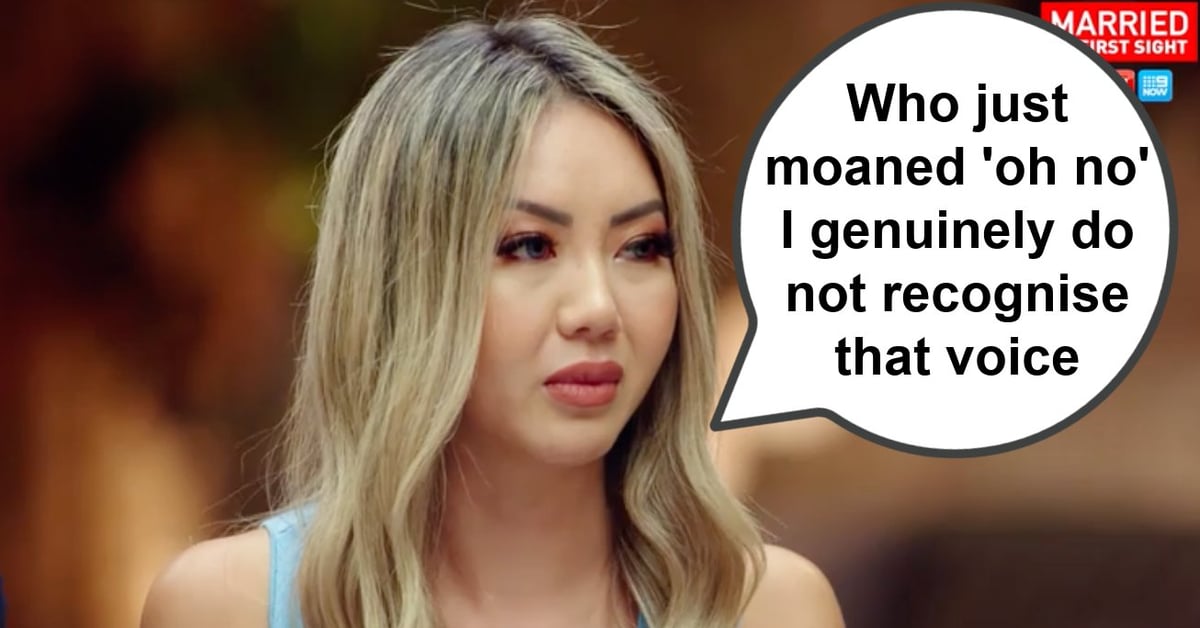 "This is an intimate moment and that man is a stranger."

We learn that last night, Cody was “more standoffish than usual” which for Cody we can imagine is very, very, standoffish. He flinched when Selina tried to hold his hand, which is kind, and then proceeded to dump her.

“I feel horrible,” Cody says, smiling, and do you tho?

That's when Cody admits that actually he's not sure, maybe yes to Selina, but also maybe no. It depends. On things he cannot identify. So.

Finally, he changes his mind and says YES he is sure it is a NO and he feels SAD which is why he is SMILING and get this man off the couch immediately we've had enough. 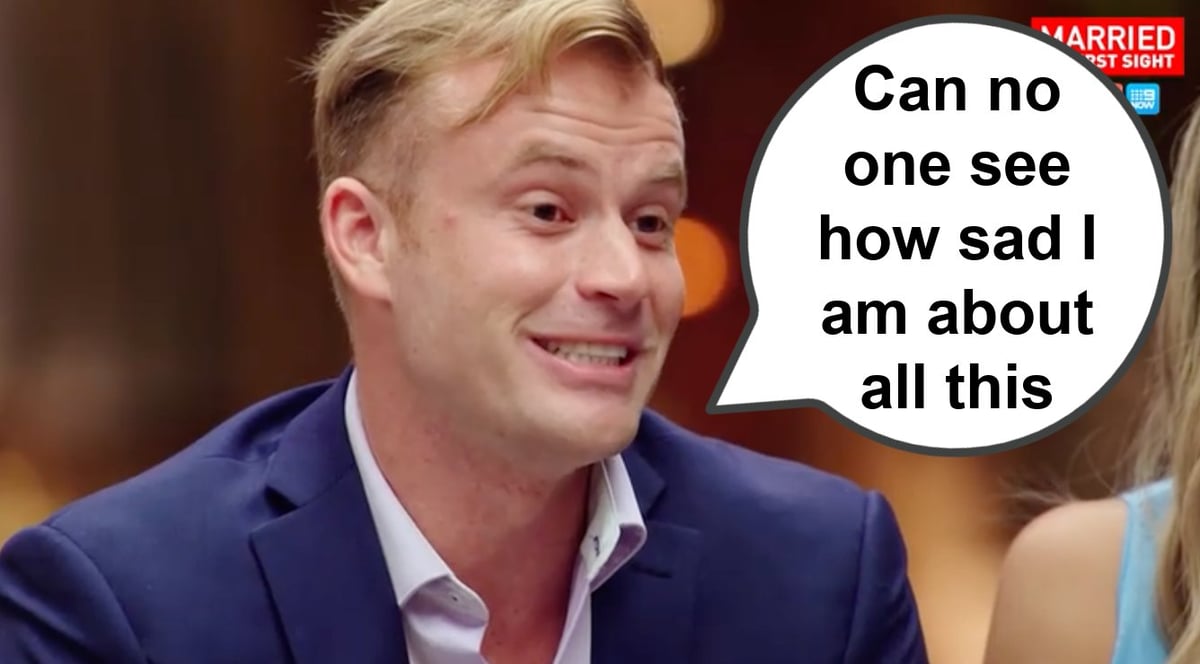 Next up are Tamara and Brent, and we watch a beautifully edited package of all the times Tamara said she hates hospitality workers for reasons she never quite specifies.

Once it’s over, Selin, who was in this experiment for maybe four minutes, asks if she can say something and yes sweetheart absolutely, and say it loudly so we can all hear, good girl.

She says it sounds like Tamara had an issue with Brent’s job title, which Tamara denies, and this is our favourite part of reunion episodes. We go through the exact same fights we’ve already had but with more people to weigh in which is both useful and efficient.

Alessandra asks Tamara about the late night phone calls from Mitch, and Tamara decides to tell a half-assed lie which we profoundly respect.

She tells the room that Mitch said "I can't stop thinking about you" (??) but only half commits to the lie because Mitch is right there and is probably gonna say that didn't happen. 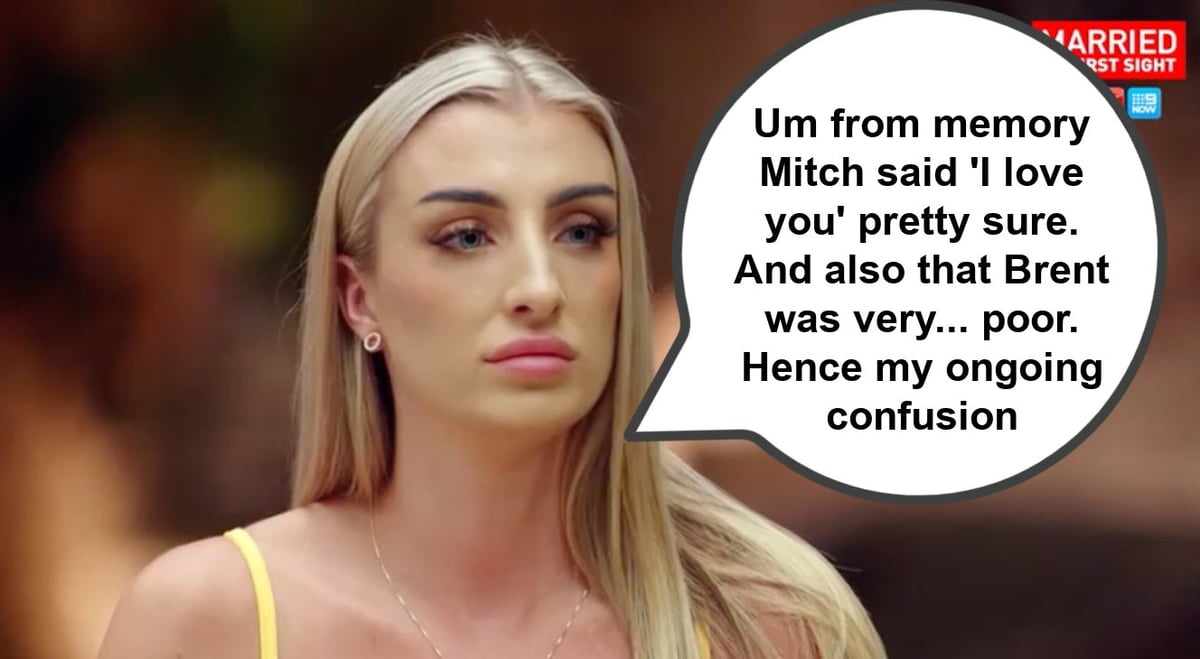 "Yeah pretty sure what's what was said so yeah."

Predictably Mitch is like "that didn't... occur," at which point Tamara storms out of the room and cries that she just doesn't "want a f**king person who works in f**king retail," which is fine (it's not fine) but Brent worked in hospitality? Which is a different industry? To retail?

Next up are Carolina and Dion, except Carolina refuses to sit beside Dion, a man who has been relatively nice to her given she cheated on him. On the television.

Watch the trailer for this hectic season of MAFS. Post continues after video.

We then watch a package that details how Carolina and Daniel's affair unfolded. Every time anyone voices their disgust, Carolina yells "SHUT UP" which is a mature and admirable coping mechanism.

As we watch Carolina and Daniel dry hump and meet in seedy bars etc., Domenica shrieks that she feels like she's "gonna have diarrhoea after watching that," and we don't fully understand the connection but we'll allow it.

Everyone panics about having watched an affair take place, but Daniel shouts, "You're all single, shut up and mind your own business," and YOU DID NOT JUST CALL SELINA SINGLE U WASH UR MOUTH OUT YOUNG MAN.

It's at this point John Aiken awakens from his slumber. 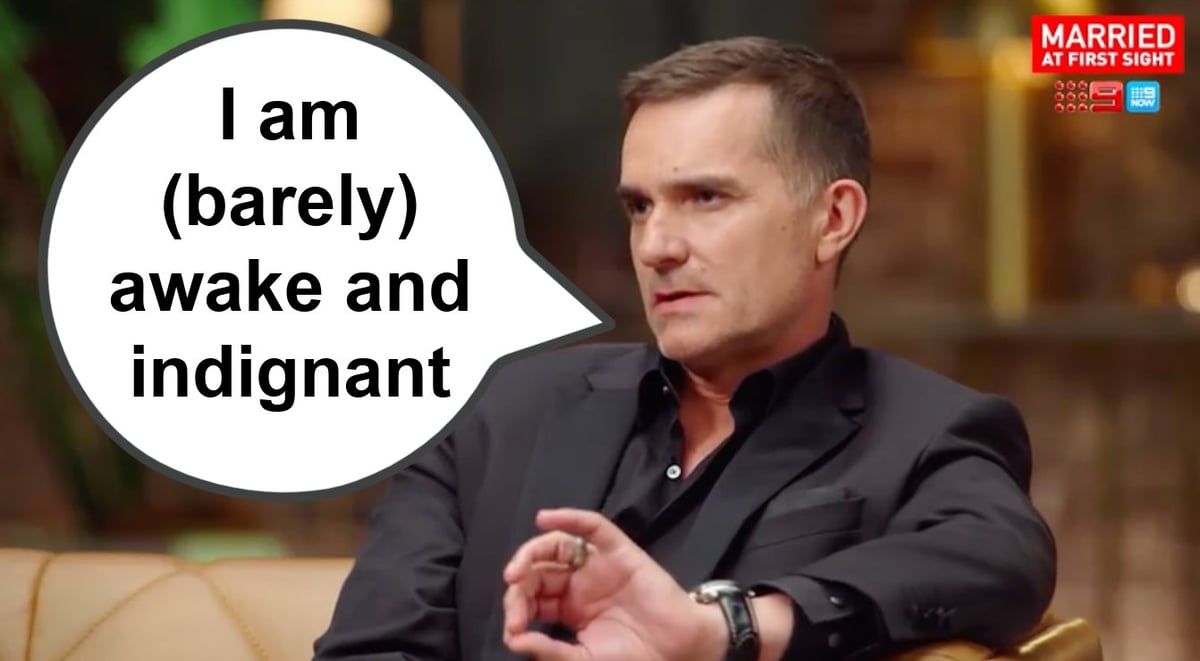 "Just because I've been asleep doesn't mean I haven't been listening."

He appears to still be half asleep as he demands that someone (Daniel?) apologise to someone else (Dion?) for everything and Daniel's all like "WELL I'M SORRY YOUR FEELINGS GOT HURT" and mate, why are you mad?

We quickly move on to Jackson and Liv and no one cares BUT FINALLY we get to the Liv and Domenica receipts and if everyone could be quiet up the f**king back that would be fabulous.

We see the footage of Domenica smashing her wine glass and Ella's all like "SEE SHE DIDN'T WAVE THE WEAPON" and how is this even a conversation.

Domenica points to the footage as proof that Liv exaggerated what happened, and Carolina starts muttering "ohhhh you're an angel and everyone else is wrong" and dude?? Should you be throwing stones?? At this point???? 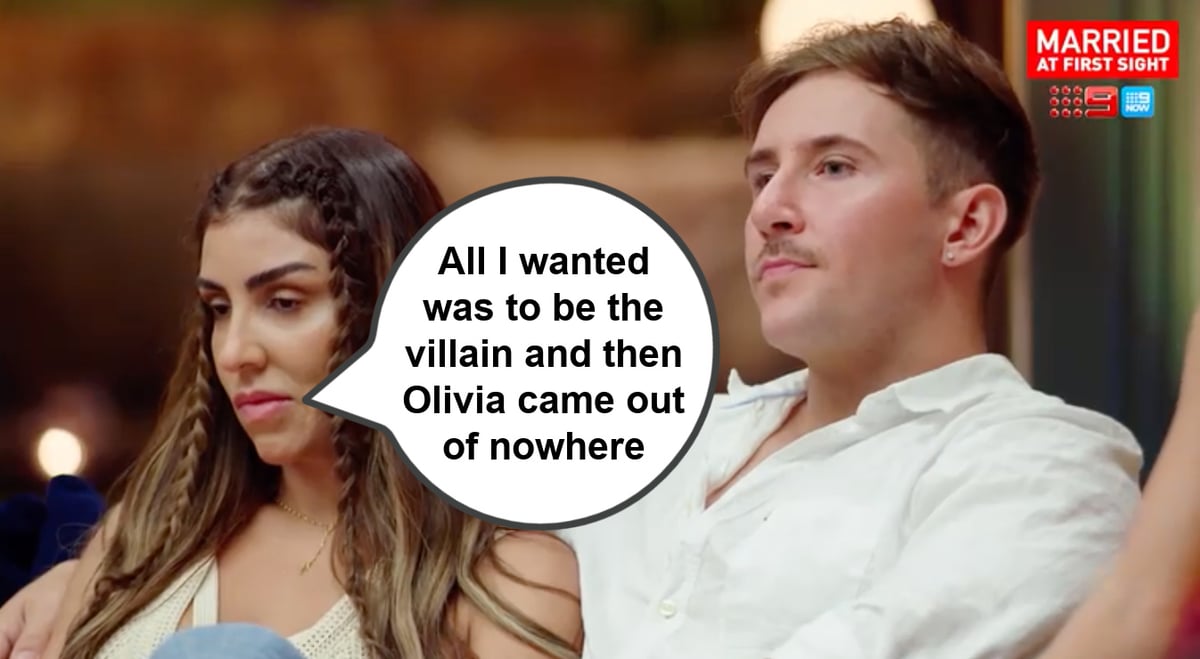 "MAY I?" Holly from HR pipes up and yes Holly you absolutely may, speak up.

She says something forgettable about how Liv should apologise and this is why it's important to go over the same footage but with new people because they also have perspectives and something to add.

In conclusion, nothing is resolved.

Finally, Domenica and Jack sit on the couch, and the experts are like: no offence but you're still together.

Domenica starts speaking exclusively in Justin Bieber lyrics which is surprising and then... that's it.

John Aiken is so inexplicably exhausted he can barely get his concluding sentence out, but announces that it was a "unique" and "memorable" experience for everyone, particularly those whose lives have been ruined on national television.