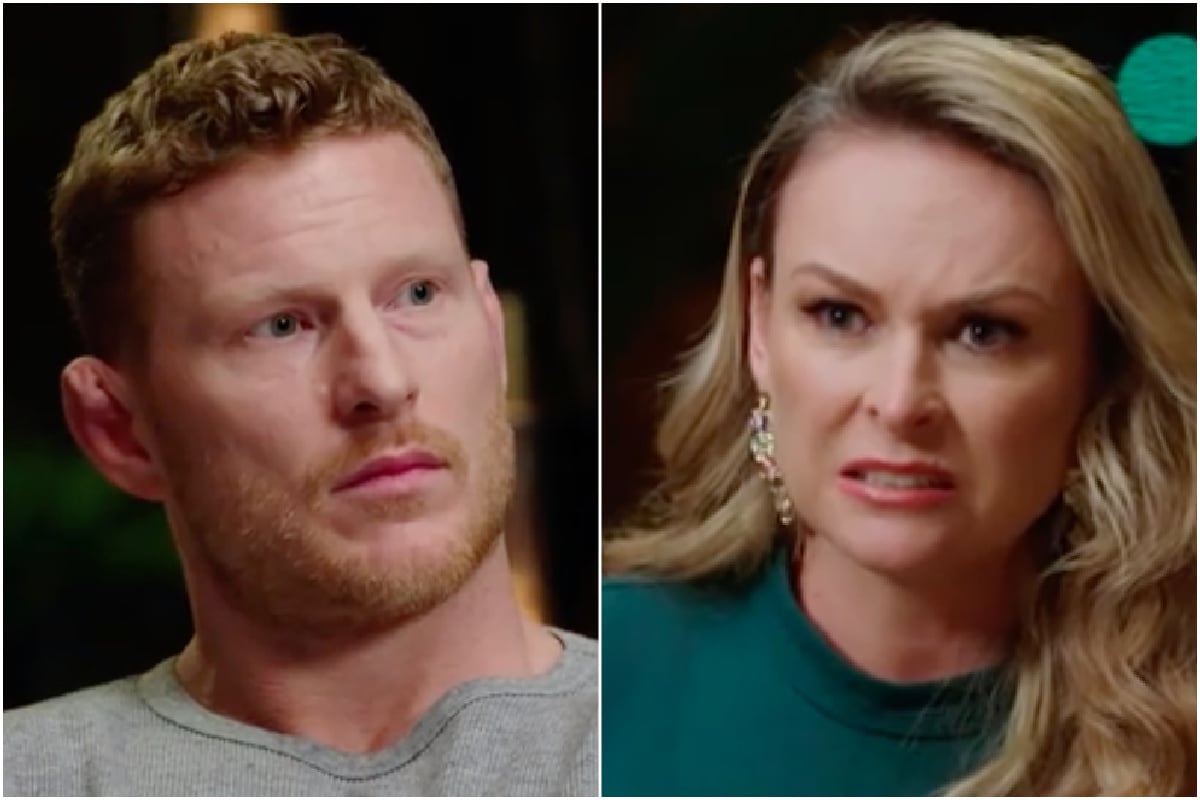 Over in Cody and Selina’s apartment, he says "looking good" to Selina as she finishes her make up and Sir, with all due respect, shut the f**k up.

"I’m just wondering," Selina asks, reflecting on the time she married a man who wasn’t attracted to her based on her ethnicity, "with your application process, like if ‘Asians’ weren’t your thing… don’t you think you should have written that?" 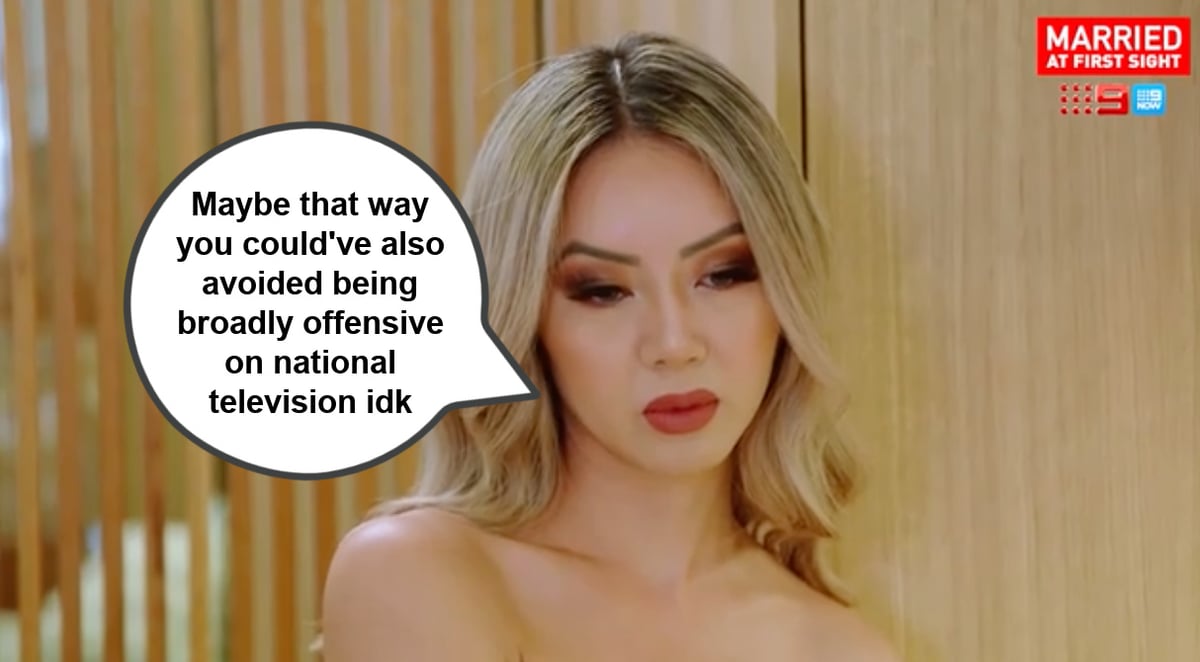 Just something to think about for next time.

And GREAT QUESTION SELINA. CODY DO YOU CARE TO COMMENT.

Cody insists he never said it wasn’t his thing and he thinks she’s beautiful and we were there Cody. This show never lies except for sometimes when they splice up people’s sentences and clearly make them say things they never said. But we’re 70 per cent sure this was not one of those times.

Over in Holly's apartment, she tells the camera she doesn’t feel very appreciated and it’s like LADY YOUR HUSBAND DOESN’T LIVE WITH YOU. She's upset that she baked Andrew cupcakes to mark his daughter's birthday and he hasn't acknowledged it, which is awkward given that we know for a fact he ate at least one in a single bite. And it doesn't appear to have been poisoned. Which shows incredible restraint from Holly. 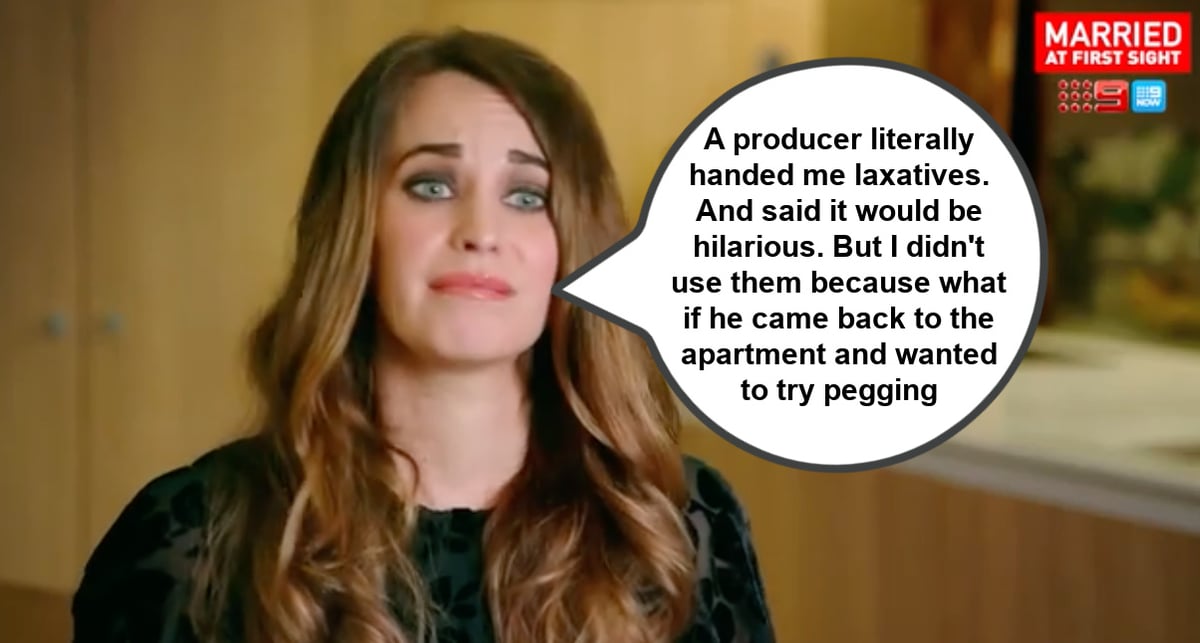 What then? But, you see, Andrew wants an apology for her outburst. That is, the time she got mad. That he was abandoning their relationship. It appears he thinks Holly ought to apologise for wanting kids, and also how dare she bring that up when it was irrelevant to the very important and very interesting monologue Andrew was performing about his 350 sexual partners.

In the lead up to the Commitment Ceremony, Andrew and Anthony discuss their first week. Andrew is SHOCKED that Selin would call Anthony a "princess" as though he did not call his own wife a bad root after literally one day.

What remains unexplained is the bleeding gash in the middle of Anthony's head that doesn't seem to be healing? Instead of spending time contemplating whether he should remain in his toxic marriage we think maybe he should be a) presenting to the emergency department and b) taking legal action against John Aiken for clubbing him. 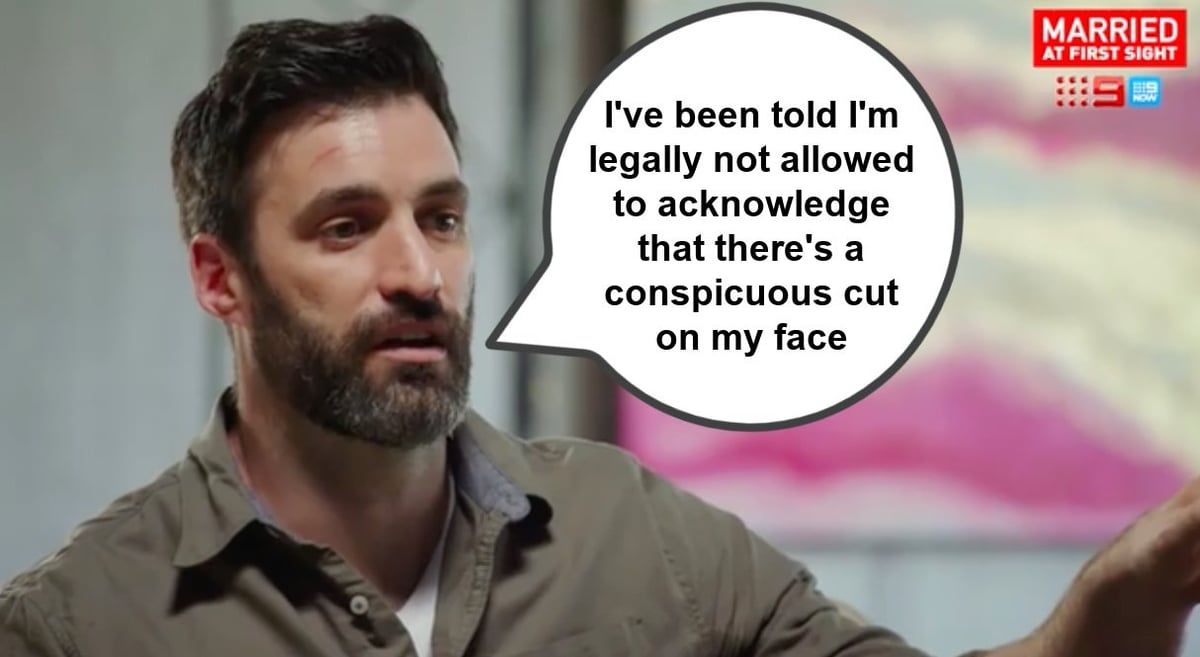 Yes, I tried to escape the experiment. Yes, John Aiken stopped me. With a weapon. Meanwhile, Selin is explaining that she thinks “there are more cons than pros in this situation” and name literally one pro. We dare you.

Speaking of problems, Domenica is worried that she might be a bit too "passionate” for Jack. In that she wants period sex on white sheets. And when her husband hesitates for two and a half seconds because they do not own these sheets they are merely guests in this hotel suite she yells “UR NOT ATTRACTED TO ME”.

Holly is also grappling with a big decision. On the one hand, she wants a baby. On the other hand, why have a baby when you can have sex with a man who’s had 350 sexual partners and 11 STDs? How is a woman to choose? 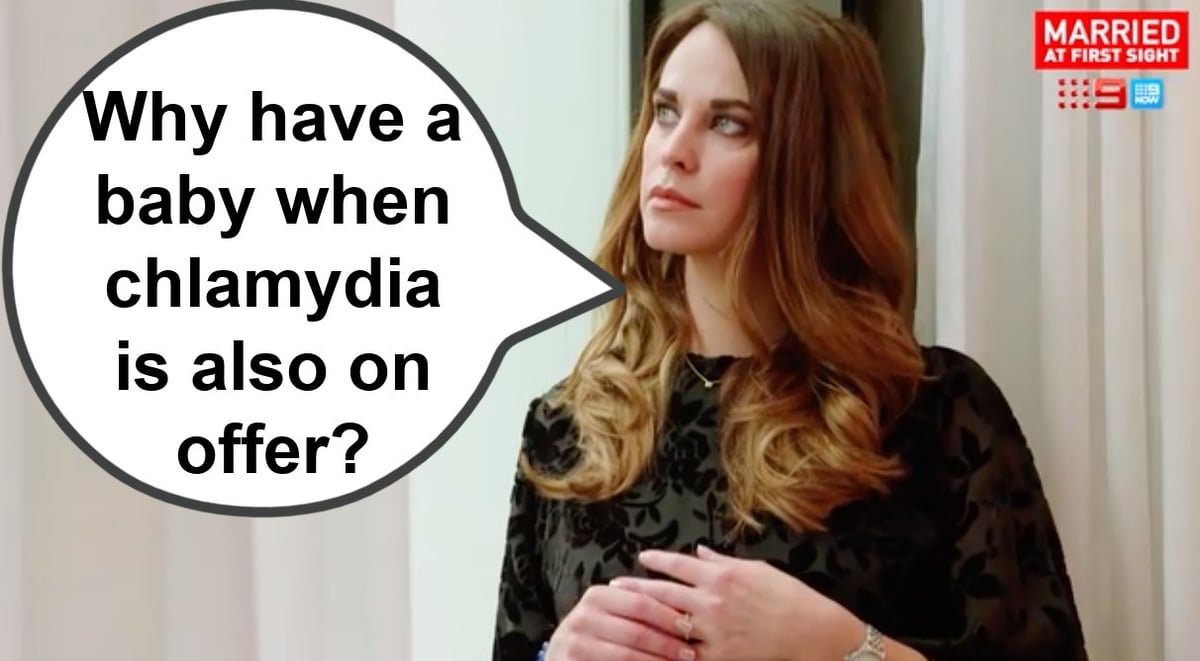 A dilemma as old as time. BUT HUSH NOW.

First up on the couch are Tamara and Brent.

Brent says, “we’re going pretty well. Fun. Mucking around. She’ll sit on me,” and sweetie do you mean sexually.

Tamara on the other hand is not sure how she feels, which leads John Aiken to ask: “Is he good enough for you?”

Tamara’s all like “soz I don’t understand the question xx” and John Aiken’s like ugggh you’re ruining the sound bite just say no.

Both decide to stay, with Brent sighing, “I’d like to think there’s more good than bad” and the bar is fckn low and we’re only a week in.

Next up are Cody and Selina, and John Aiken asks them to tell the experts what’s been going on.

Cody’s all like “OK so funny story, I’m a racist” and even Holly, who lives with an aggressive Texan, is shook.

He tells the experts that in the photo ranking task he put Sam first, and everyone gasps except for Al. 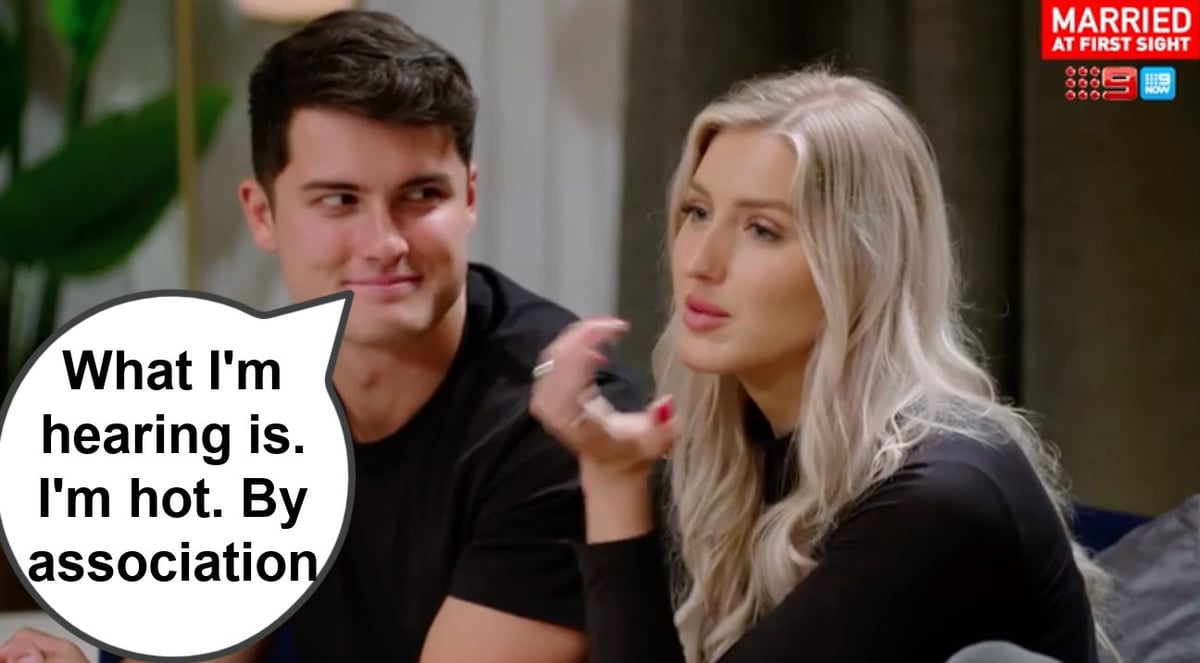 "I'm proud to have the hottest wife. Mostly because of what it says about me." Cody attempts to apologise, and tells Selina “I look at you and think you are the most gorgeous girl (except for Sam and maybe Tamara)” and the experts are impressed at his self awareness.

Both choose to stay which seems like a terrible idea but okay.

Domenica and Jack are summoned next and before they reach the couch Domenica’s yelling “I AM A WOMAN WHO BLEEDS MONTHLY” and that’s lovely darling please be seated.

Alessandra nods sympathetically as though this is a perfectly normal conversation to have in a room of 22 adults and one Al. 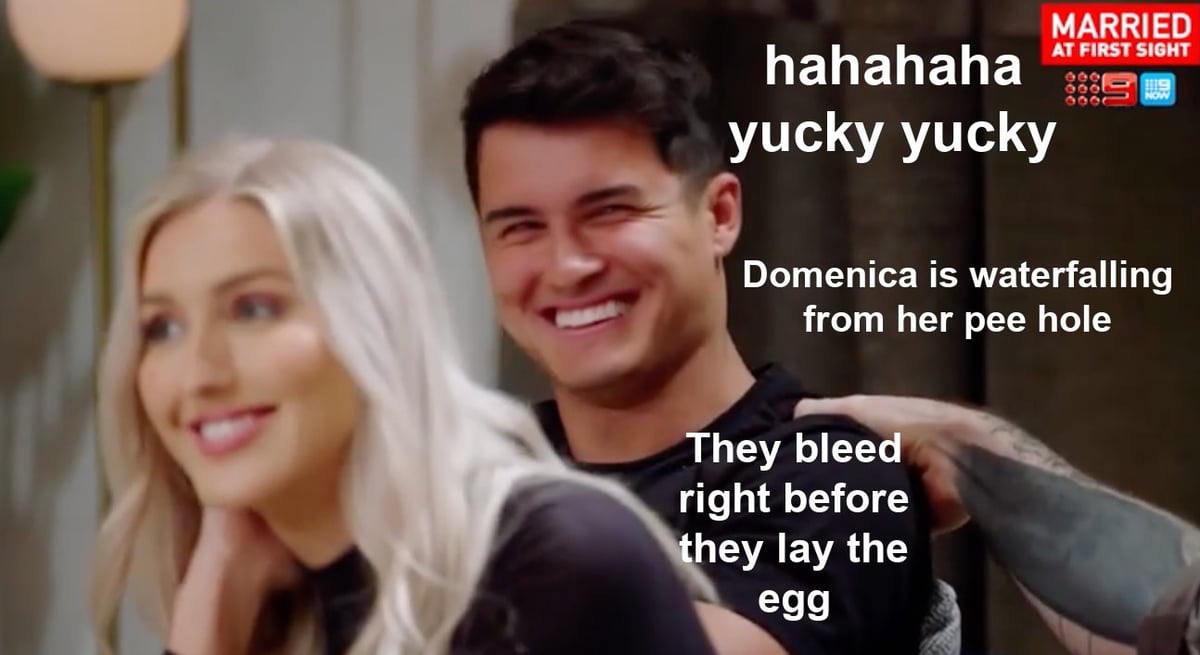 "hehehe she wants to bleed on Jack's doodle" Al puts his hand up and asks the teachers experts why Domenica can’t just hold onto her period while she’s having sex, like wee wee, as to protect Jack’s genitals, and Sam rubs his leg affectionately as if to say, “Let’s talk about this when we get home, okay?”

Wiping vomit from the corner of his mouth, John Aiken then calls up Anthony and Selin, and hopes the blood dripping from Anthony’s forehead has nothing to do with Domenica’s antics.

Selin immediately rolls her eyes because she hates when people mention Anthony.

Anthony tells the experts about how he opened up on the honeymoon and Selin kept mocking him with “boohoo” and “cheer up princess” and Selin smiles proudly thinking about how clever her jokes had been. 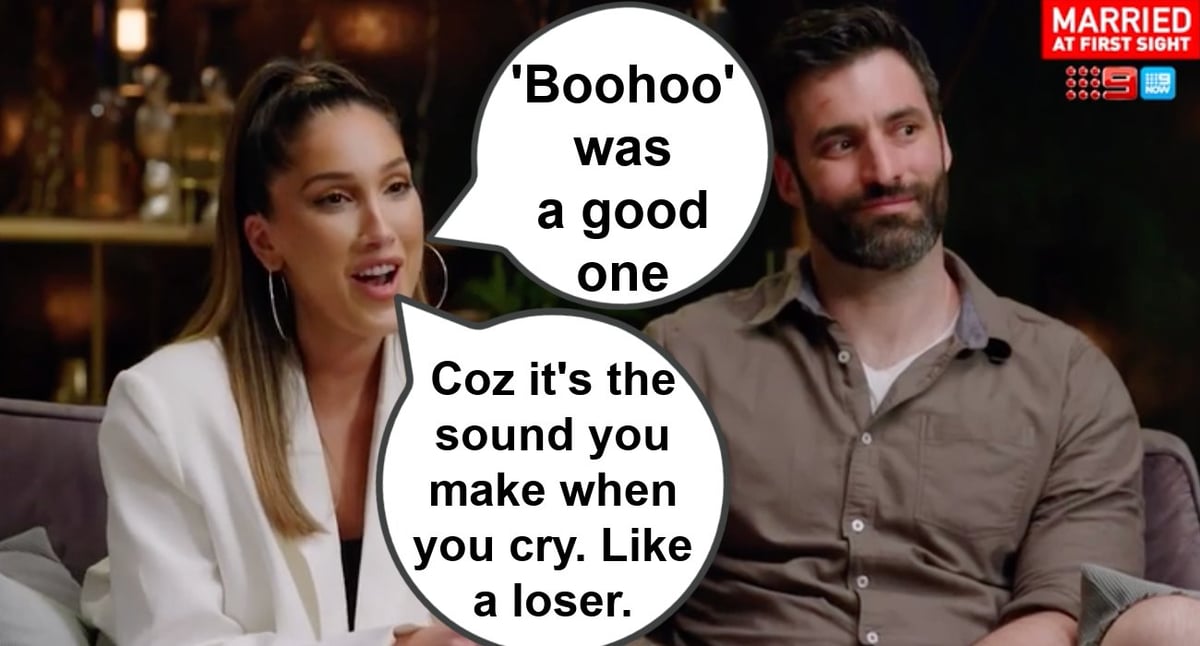 "You see, I was mocking his emotions. And how embarrassing it is when he expresses them." But. This. Is. Mel’s. Moment.

“That’s not funny,” she tells Selin. “It’s really demeaning” and omg we love it when Mel gets people in trouble.

Eventually Selin concedes admitting “It’s me not being sensitive enough”. Like, yeah. The guy next to you has sustained a head gash and still no one is enquiring?

Anthony writes “stay”, likely because of the John Aiken clubbing incident that resulted in the bleeding head, and Selin also writes “stay” but in writing so small you can’t read it. Just because she’s staying doesn’t mean she won’t be petty. In case there was any confusion. 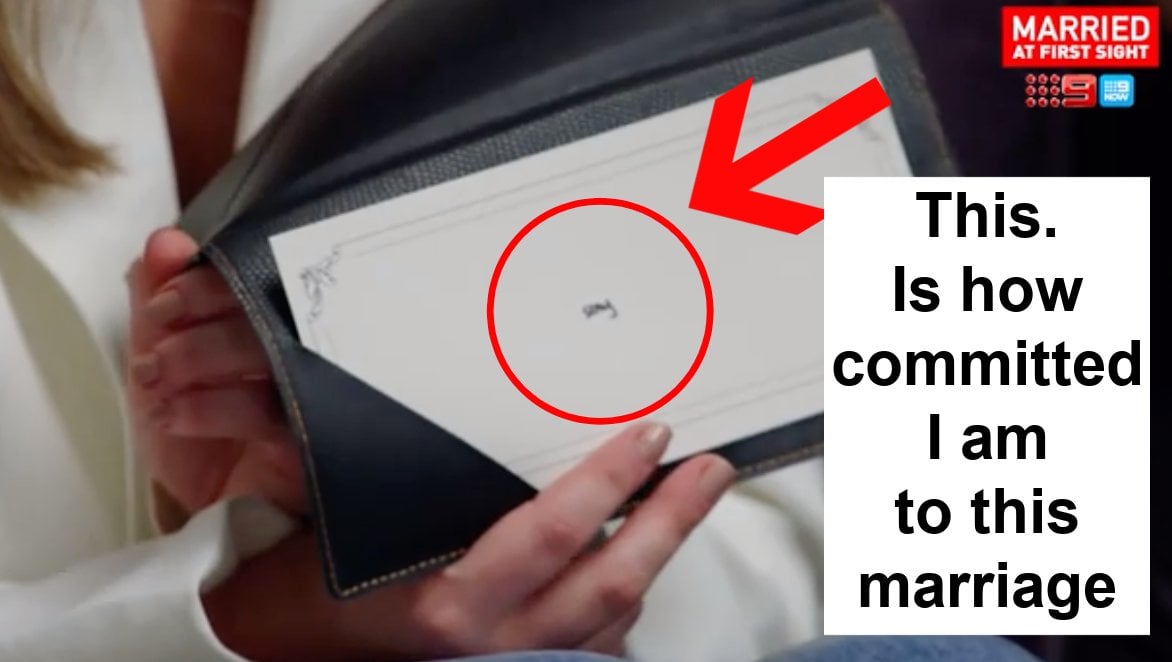 "It's called symbolism."  Next up we have new mum Sam with her toddler, Al. Almost immediately, the issue of Al’s maturity comes up and he acknowledges, “I probably aren’t as mature as you’d like me to be,” and how is this not scripted.

But Al would like the experts to know he’s been trying. He cooked spaghetti bolognese and from both their reactions it was terrible.

He says Sam taught him how to use the washing machine so “NOW I KNOW HOW TO DO IT I CAN DO IT WITHOUT ASKING,” and Sir you’re in your mid twenties why was it this poor woman’s job to teach you in the first place. 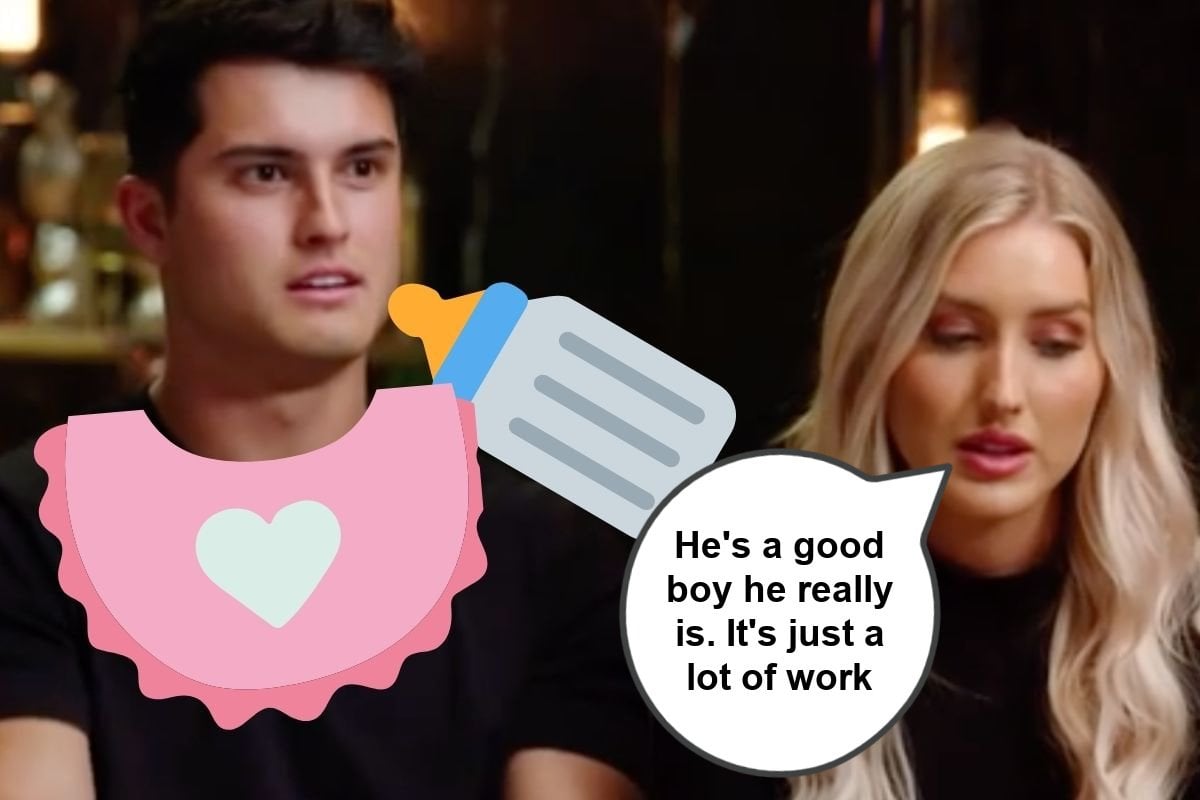 "I'm not sleeping. I'm a single mother..." Despite the fact that Al is, by all measures, an infant who is incapable of taking care of himself, the experts encourage Sam to step back and let him take the lead.

She’s distressed. Like okay but what if Al puts a knife in the toaster? What if he pulls the dog’s ears? What if he does a shoey and it upsets his tummy and she runs out of nappies? What then?

Ultimately, her obligation to her son drives her to stay, and Al also writes stay - but he’s written the ‘S’ like people did in primary school and we want to die.

But shut the f*ck up because it’s Andrew and Holly. They make their way to the couch and sit down in complete silence, which prompts Alessandra to ask: “what’s going on here with this low energy and sour faces?”

Hmmm who knows Alessandra, maybe it’s because you ruined their lives. 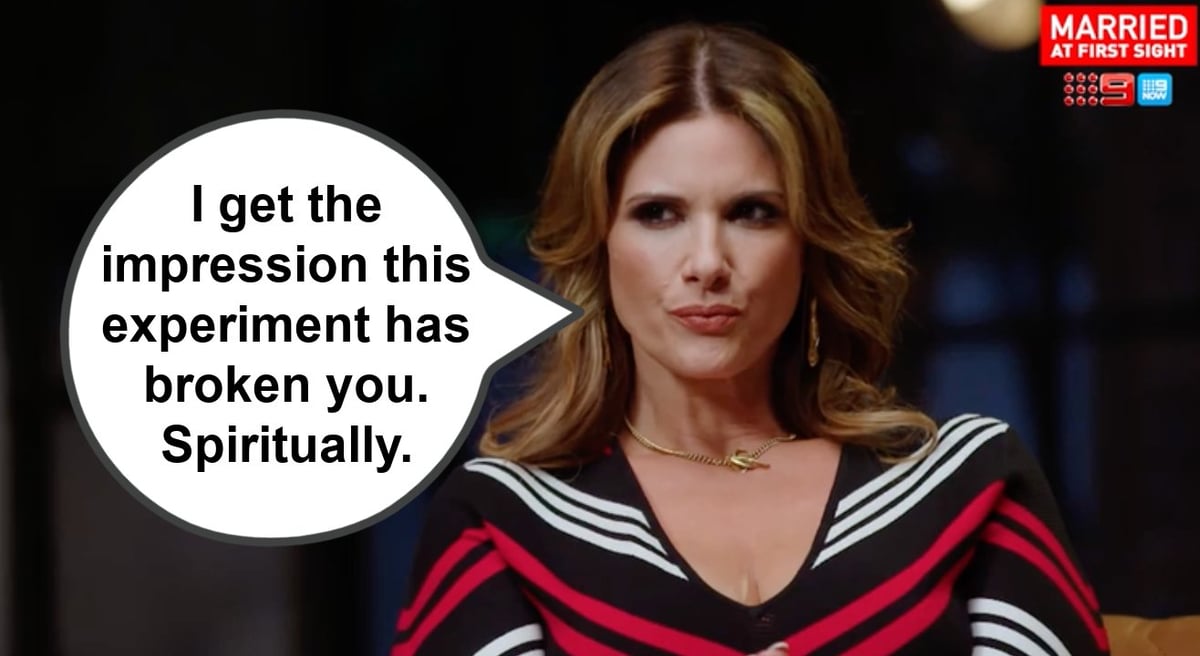 "And psychologically. Perhaps also sexually."  Andrew is angry because when he and Holly had sex they only ‘pecked’ and Jesus can you have this conversation privately or even not at all.

But no. Andrew insists “I can’t walk around on eggshells worried about how people will respond” and you actually really can. It’s called being a normal person.

Alessandra asks, “so with people you love in your life you’re just honest and say things that are hurtful? And you don’t care?” and it’s always weird when the experts call contestants out on their behaviour when they created this horrid mess in the first place.

Andrew tells the experts that Holly sent him ‘brownies’ for his daughter’s birthday and THEY WERE CUPCAKES. WE WATCHED YOU SMOOSH ONE INTO YOUR MOUTH WHY ARE YOU PRETENDING YOU DON’T REMEMBER.

For reasons that can only include deep self-loathing, Holly chooses to stay. Andrew uses 600 words to reveal his decision which is literally one word: leave stay. Did he ask for a new card when he changed his mind? No. Because he wanted Holly to look at the word ‘leave’ we guess. 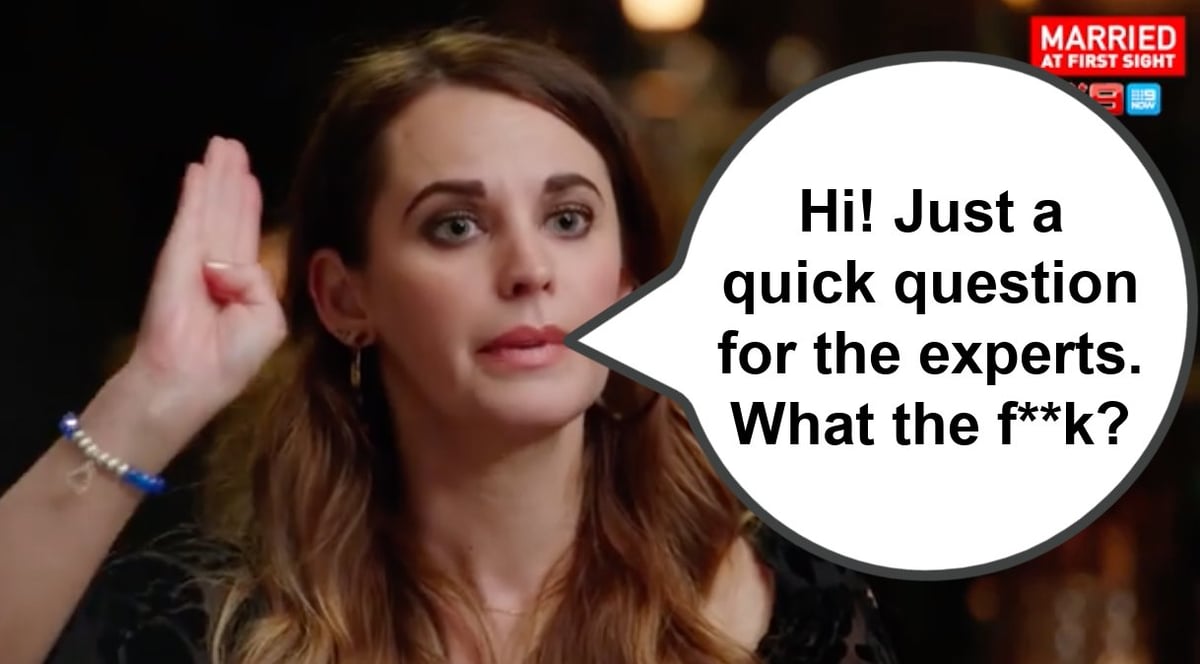 Okay firstly… Andrew would’ve had to stay anyway because that’s how these stupid rules work. And secondly… John Aiken don’t pretend you haven’t been extorting people in order to stop them from leaving?

Apparently Andrew doesn’t “know how to quit” and we’re going to need you to stop being so American for literally five seconds.

“This is a relationship on life support,” John says. “But we’ve seen couples do it…” and with all due respect, no… we really haven’t.