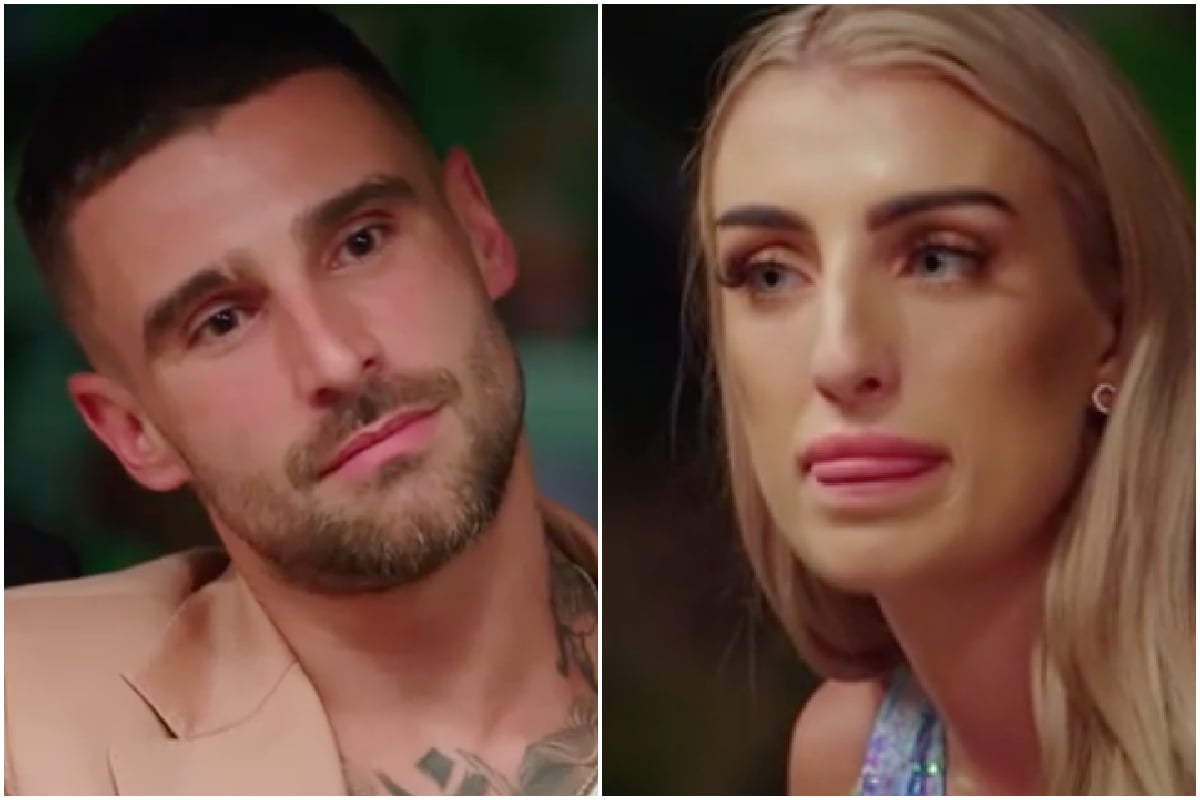 It's the final final FiNaL dinner party and this group of humans need to be legally banned from spending any more time with each other.

Al tells us he is all grown up now. He's almost four and will start Big School soon. He doesn't even do shoeys anymore, except for sometimes on special occasions. 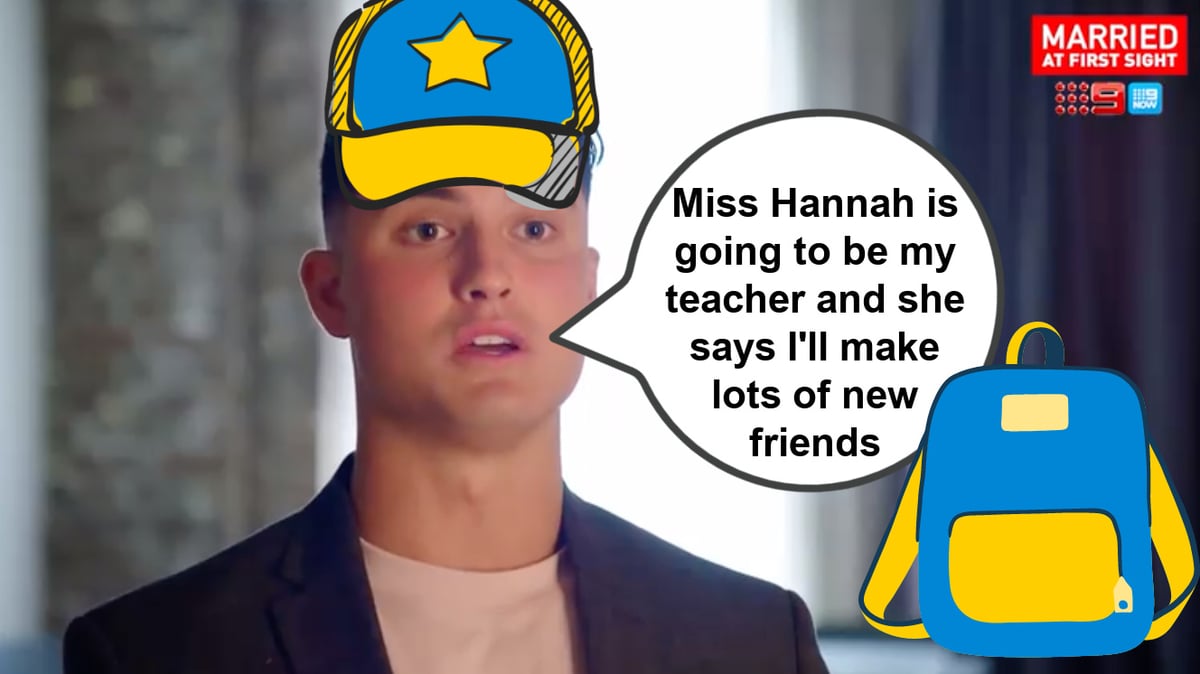 Matt also tries to prove life is going well for him. Unfortunately, however, he is filmed getting ready, with a camera zooming in every time he does something unusual. Which is shockingly often.

He spends six minutes spraying deodorant under just his left arm, and then sprays 11 spritzes of perfume onto his neck and literally no one can breathe, Sir, we need you to calm the f**k down.

OH STOP IT'S MITCH. He's full of regret ever since he shrugged his shoulders at final vows six weeks ago and disappeared into the fog at a haunted cemetery.

We wonder why Mitch has not, say, called Ella. On the telephone, for example. To see if perhaps...

OMG THEY'RE TOGETHER THIS IS SUCH CLEVER CAMERA WORK WELL DONE EVERYONE INVOLVED THIS IS WHY YOU DESERVE AN EMMY. 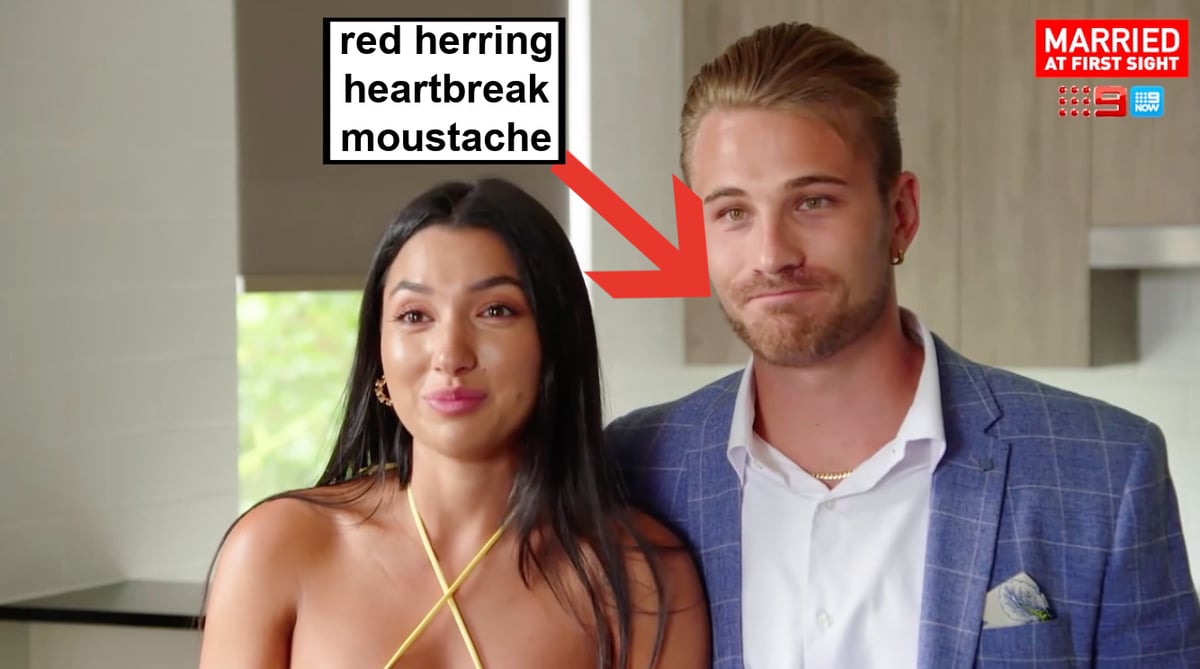 The moustache really threw us.

Meanwhile, the experts return to their cupboard. They're quite excited for tonight as they've been unemployed for six weeks and what with the cost of living, they desperately needed the work.

The (mostly divorced) couples are on their way, and Al isn't even in a car seat anymore because he wants to show Sam that he grewed up.

As everyone begins to arrive, Jack walks in alone.

Everyone swarms him and Sam and Tamara are like "is it because Dom is a witch? Would you say? What's the thing you HATE most about Dom? Wait wait I'll go first," but turns out Jack doesn't hate Dom, in fact he quite likes her.

At this point Tamara starts studying her own hands, and Sam taps out because literally no one cares that you had an amicable break up, Jack. 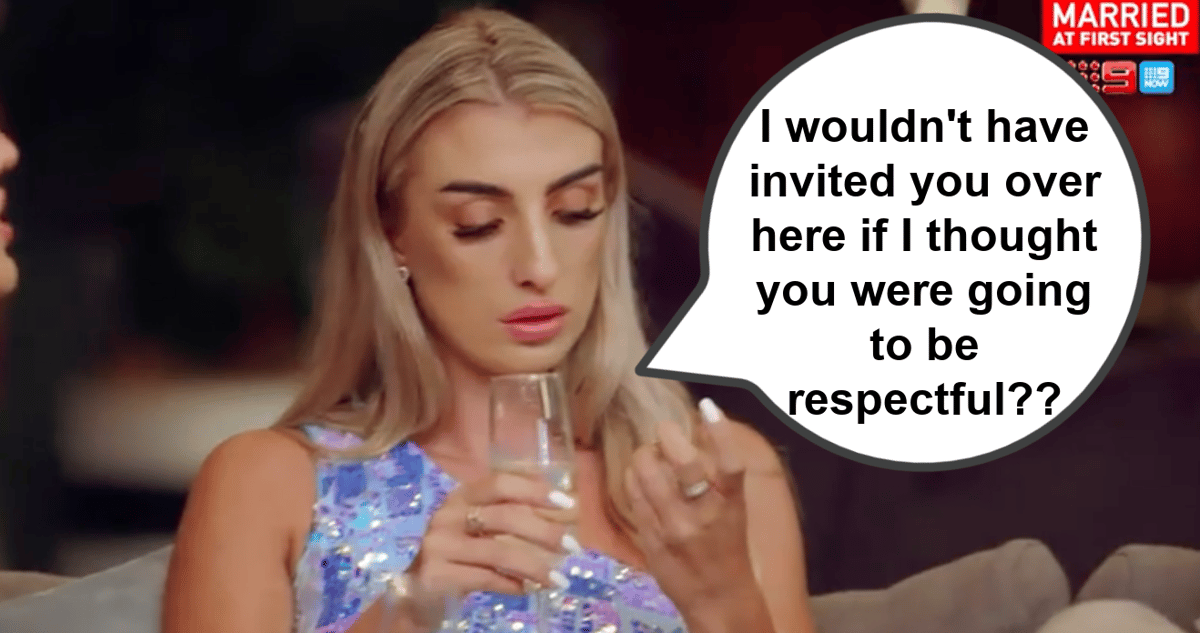 There are more important issues. Such as Tamara's distress over Brent's decision to wear a jacket he's worn to a dinner party before, and okay in his defence this is the 83rd dinner party.

But shut the f*ck up because Brent has gossip, which he's planning to bring up later. He's discovered that Tamara texted another groom before final vows and WHO TELL US IMMEDIATELY. Somehow he's read the texts which seems like an excellent use of his time.

Speaking of grooms, WHY IS NO ONE ACKNOWLEDGING ANDREW AND HOW HE DISAPPEARED. He wasn't at the boys' night either and how did he get out of these contractual obligations? Did he flee? The country? Legitimately has anyone seen him?

Happy to be with his friends and to not even have to sit in a high chair, Al asks Dion: Are you excited to see Carolina?

No, Al. Dion would not be 'excited' to see his ex wife (who vocally hates him) with the man she cheated on him with.

Brent says the word on the street is that Daniel wants to call Dion out for a boxing match and no but what is it with reality stars and boxing matches? It's honestly one of the biggest questions of our time.

When Carolina and Daniel arrive, Dion greets them politely which Carolina thinks is "weird and forced".

But shhh because LADIES AND GENTLEMAN DINNER IS SURVED.

Reflecting on the Daniel and Carolina scandal, Matt tells the camera that if he had Carolina yearning for him he probably wouldn't say no and that is literally not the question. Anyone asked. Matthew. 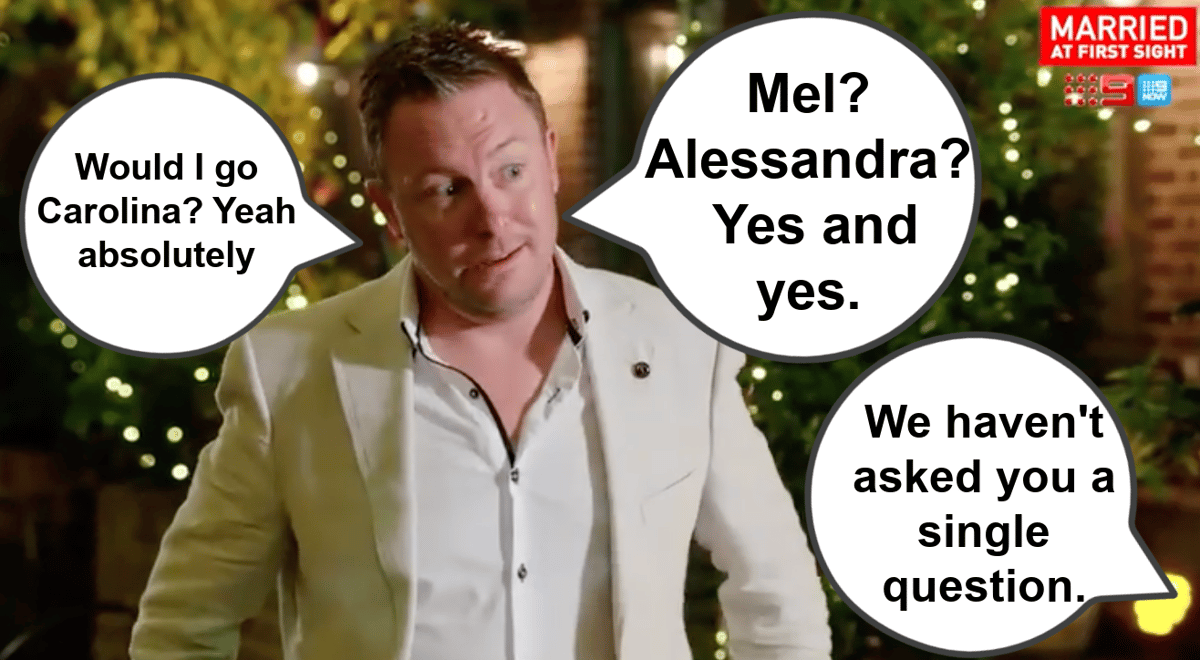 Back inside, Tamara, the woman who spits at hospitality workers for fun, tells Al it's rude to stand (?) while speaking to people (??).

It's at this point Al does a big burp and he is still a baby we knew it.

"She needs to keep her nose out of everyone's business," Al says of Tamara. "No pun intended," and Al there is no pun? Intended or not?

That's when Brent decides to introduce a game. To the table. Full of grown adults.

The rules are that everyone has to say the most negative thing they went through during the experiment and omg how fun.

Tamara is invited to go first and says something about missing her dog but no, Tamara. This was a set up.

"ISN'T YOUR BIGGEST NEGATIVE THAT YOU TRIED TO PICK UP MITCH AT THE END OF THE EXPERIMENT AND HE REJECTED YOU?" Brent yells and what. 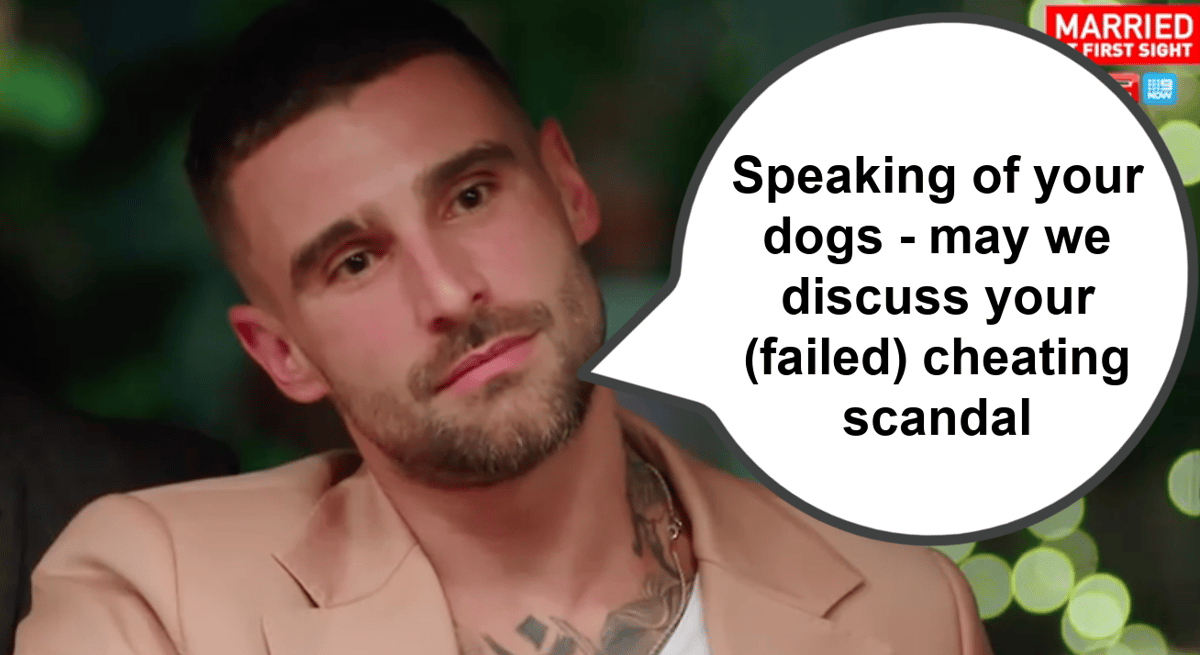 "There is no game. Only a texting scandal."

"Didn't you say I have no feelings for Brent... and I know you're with Ella but... and don't say no because I saw the message," Brent continues, but Sir we're going to need you to slow down and ensure you don't miss any important details.

Tamara thinks this is ridiculous. She did NOT try to pick up Mitch. It's just that:

a) she thought Mitch and Ella had broken up (wait what), and

b) Mitch called her at 2am one night

Of course, these pieces of information serve only to make Tamara look more guilty, and as it turns out, Mitch called everyone. 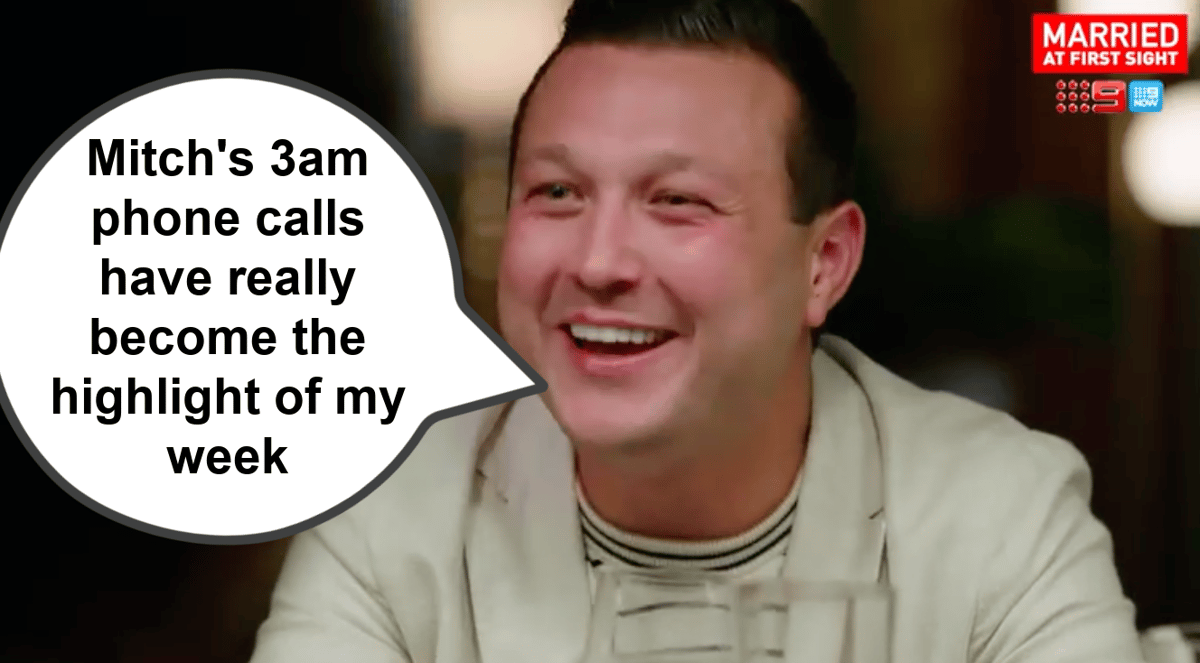 Are none of you... employed.

It's Dion's turn to speak and Carolina mutters, "yeah make a speech..." under her breath but appears to have said it far louder than she intended. Dion hears and asks, "what Carolina?"

Oh, um. She was just being snarky but it was meant to be private. "Err make a speech you're so good at them," she remarks and Carolina please everyone knows you hate Dion.

"WHAT'S YOUR PROBLEM WITH ME," she yells, sitting beside the man she cheated on Dion with.

It's at this point we realise that Carolina and Daniel turned up thinking they'd be the stars of the dinner party, which is awkward because their cheating scandal is one of the least interesting storylines of the season.

Luckily, we have Holly from HR. And she has something she's been meaning to bring up with Olivia. Holly tells the table that Liv wasn't kind to her at the second dinner party, and, in case anyone had forgotten, she did also circulate a nude image of Domenica. Which she refuses to apologise for.

But Liv has a simple explanation. She hasn't apologised, you see, because she's not sorry. In that Dom's photo was on the internet, which is public, and therefore anything you find on the internet ever can be circulated and mocked and it doesn't hurt anyone's feelings. Those are the rules.

That's when Jackson jumps in to defend Liv, reiterating that Liv couldn't tell Dom about the photo because they weren't friends. Which wouldn't be a problem. IF SHE HADN'T CIRCULATED THE PHOTO TO OTHER PEOPLE REPEATEDLY.

"HOW INTIMATE IS GOOGLE?" Jackson shouts and mate. The things we could find of literally anyone on Google. And then circulate. In a way that would be mean.

Liv jumps in to reiterate that she felt physically unsafe in Dom's presence, because "you literally stood across the table and fashioned a f**king weapon".

Okay. The way this story keeps getting wilder every time it's told is giving us life. Next time Liv brings it up it'll be like: "and then she stabbed me with a knife and yelled satanic verses while her head rotated 360 degrees." 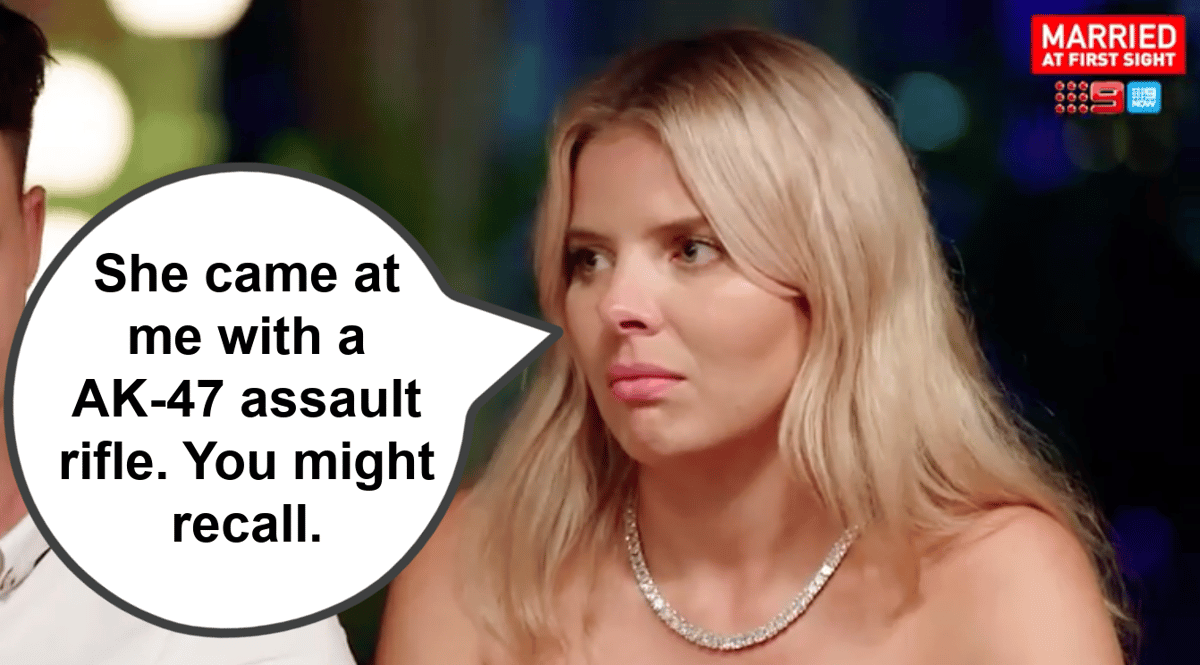 'It was really disturbing.'

At the other end of the table, Dan and Carolina won't stop making out which feels inappropriate. But we're temporarily distracted because Al appears to be drinking directly from a water jug and not a glass, which is what happens when he doesn't have supervision. 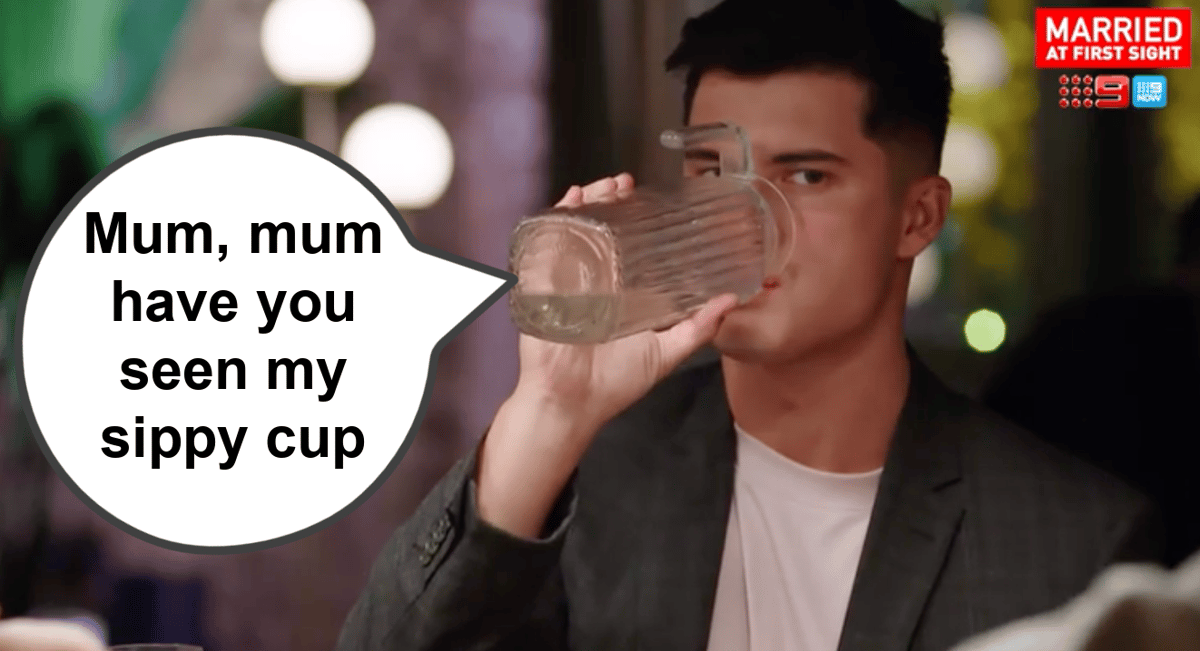 'It's ok I'll just drink out of this jug and spill it all down my front.'

Both Daniel and Carolina really want a fight so decide to each try to start sh*t. Daniel calls Dion fake for no reason, so Dion yells that Daniel's teeth are fake and look like he got them done in Bali for $2.

Carolina tries to yell at Domenica about the time she broke a glass but everyone's like what no we've been over this.

Brent suggests the group stops paying attention to Carolina and Daniel so they don't get anymore airtime and they're so upset that's really unfair all they wanted was to be the villains and then Olivia came out of nowhere.