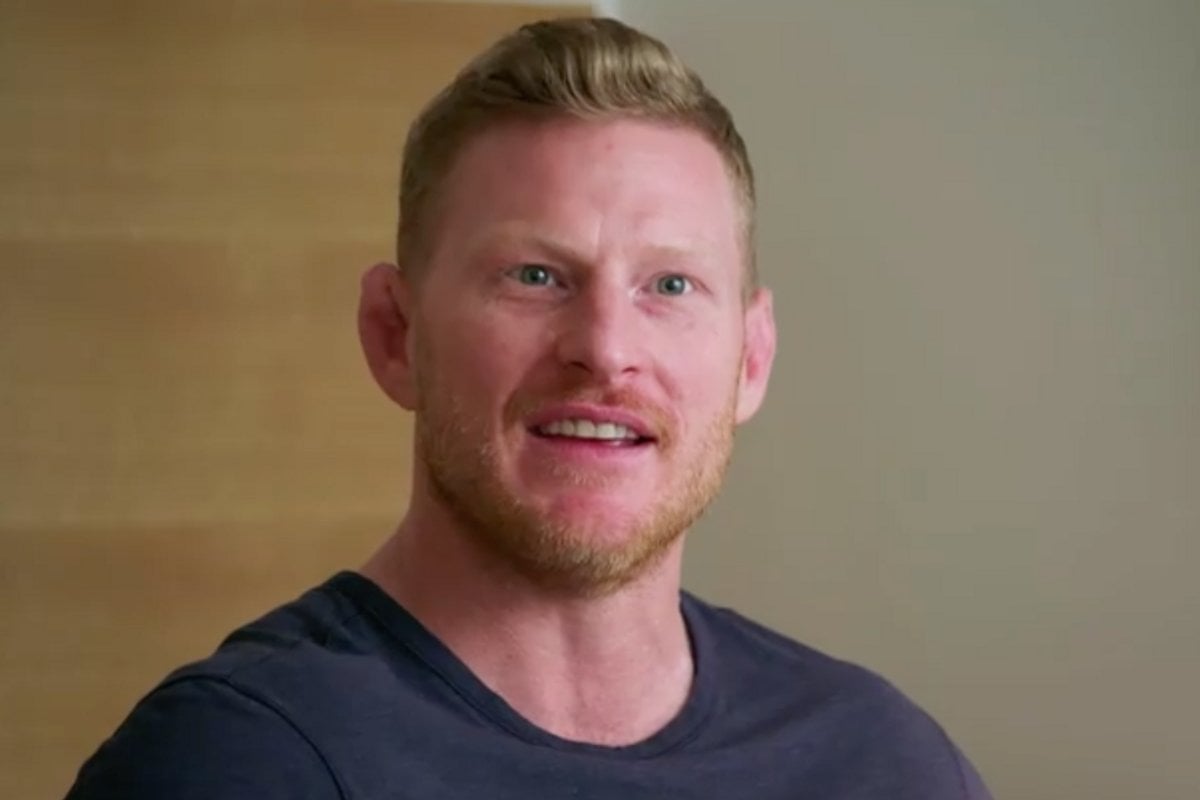 To catch up on all the MAFS 2022 recaps and gossip, visit our MAFS hub page. Want the MAFS recaps delivered straight to you? Sign up to Mamamia recaps here.

The honeymoons are over and now it's time for the couples to move into a packed hotel in the centre of Sydney's COVID outbreak.

There are condoms in every bathroom cupboard and can John Aiken calm the f**k down.

As they settle in, Holly decides to sage her apartment, and yes Andrew tries to smoke it. Holly has to gently indicate that that's not what it's for and what is it with this show and men having to be trained in basic life skills.

Speaking of basic life skills, Al is so incompetent at being a grown up he can't open the door of his apartment. Sam is still upset about the time her husband did a shoey in front of the nation, and reflects that Al can't "expect girls to find that hot". But he does. And it's so strange. Because none of us find it funny and what a waste of a shoe.

She teaches him how to use the washing machine which, while helpful for his development as a human adult male, is not even remotely her job. 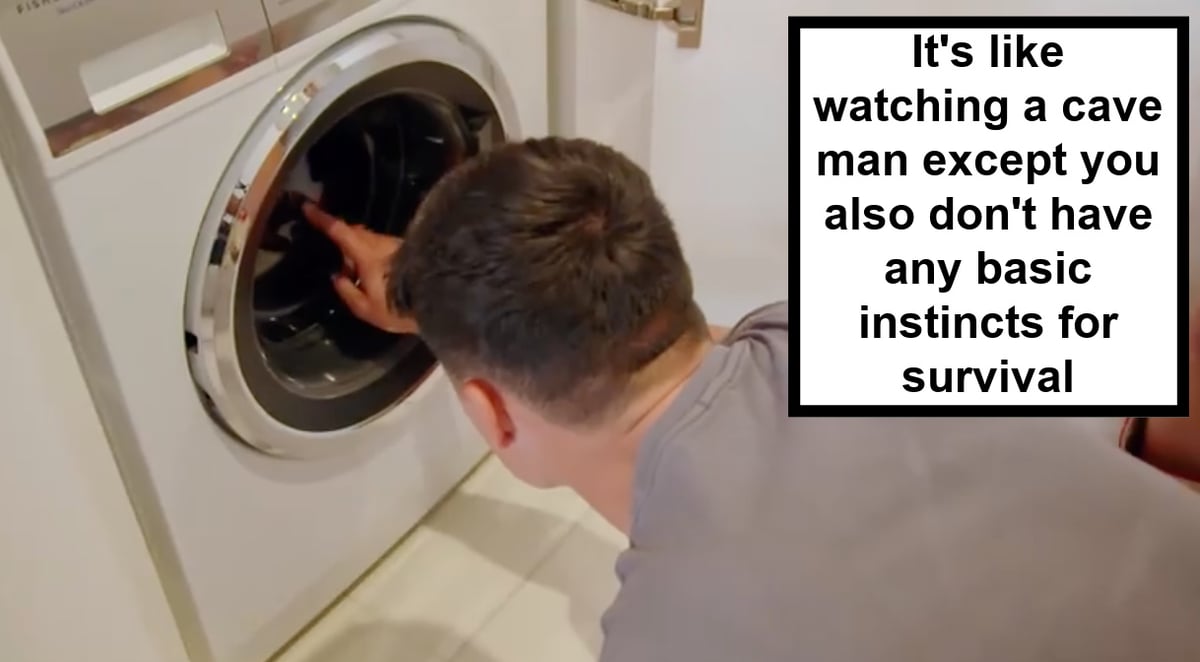 It's genuinely impressive you've made it this far. Life-wise.

But look. The banal realities of domestic life don't get you one million viewers an episode. So the experts decide to fast-track the experiment.

In a creepy pre-recorded video, Mel and John Aiken announce it's CONFESSIONS WEEK, otherwise known as "OMG WHO DO U THINK IS HOT WE DEMAND YOU RATE THEM".

As a side note, Alessandra doesn't appear in the video with Mel and John and we feel like she's getting frozen out... like Trish.

They explain that the couples will face "confronting tasks" and with all due respect they literally just met. May they please have a conversation. Or, say, get dinner. Privately.

Instead, Holly and Andrew receive instructions to write a letter to each other, confessing something they've never told anyone before.

Andrew says he's going to "reveal something to Holly that she’s going to find very confronting that he’s wanted to tell her since the honeymoon". We're just starting to roll our eyes and yell that this whole show is full of clickbait when... what the actual f*ck. 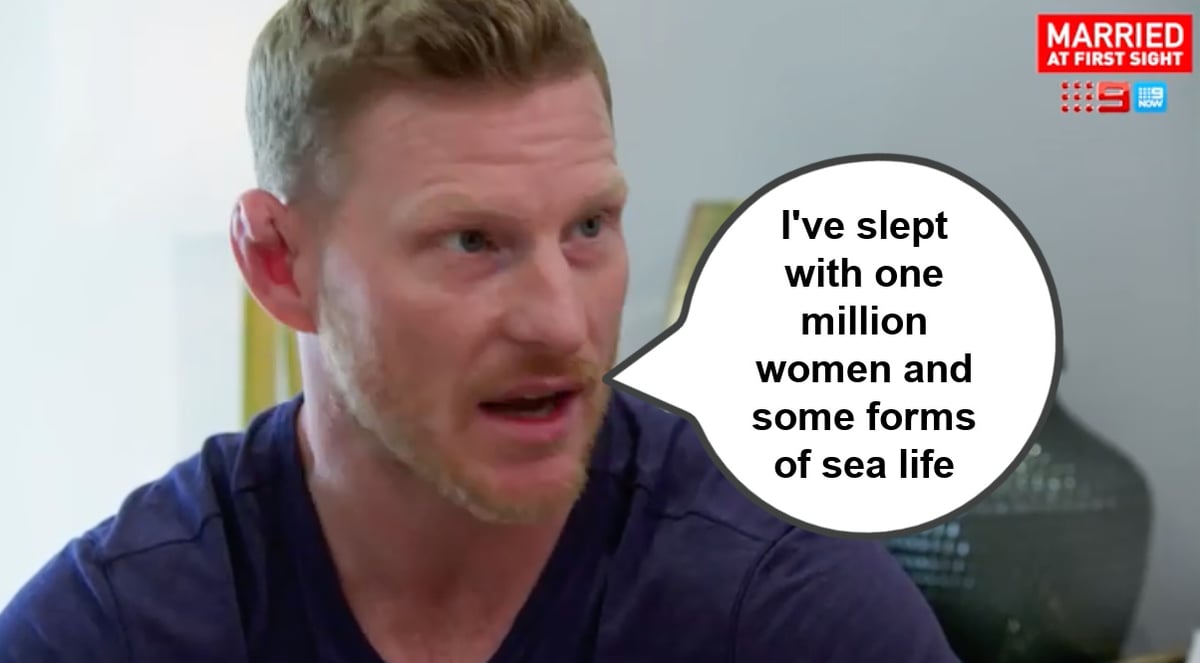 He starts by reiterating: "You're bad at sex, Holly, and my Texan d*ck is very good," and then shares that, yeah, he's had 350 sexual partners.

Holly is like, okay, weird flex. And pretty sure this isn't at all what the experts meant but okay.

Andrew goes on to explain how he calculated that number and also the continents on which he had the sex and how is this prime-time television right now. 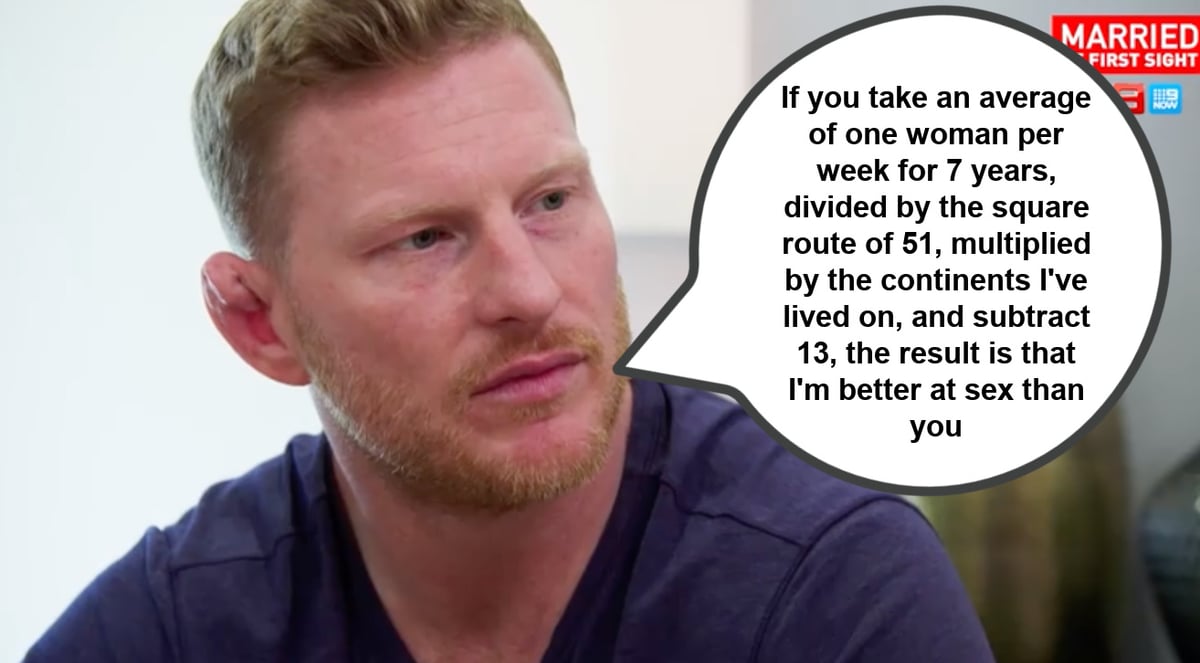 'We take maths pretty seriously in Texas.' "In a roundabout way," he tells Holly, "you would benefit from my experience in the bedroom."

Her response is simply "cool," but he refuses to stop.

Andrew pretends he was joking, but he wasn't. He was making it clear to his fake wife of one week that he doesn't want her to penetrate his anus. In case she was wondering. 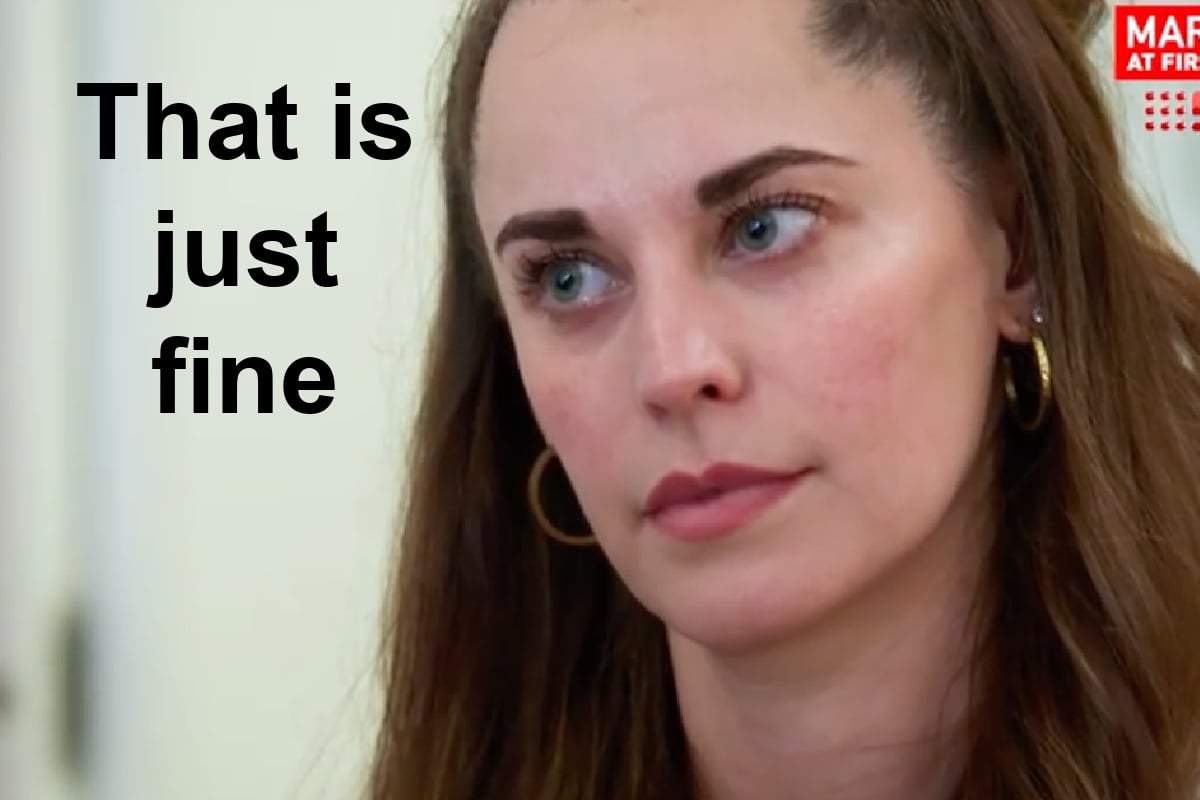 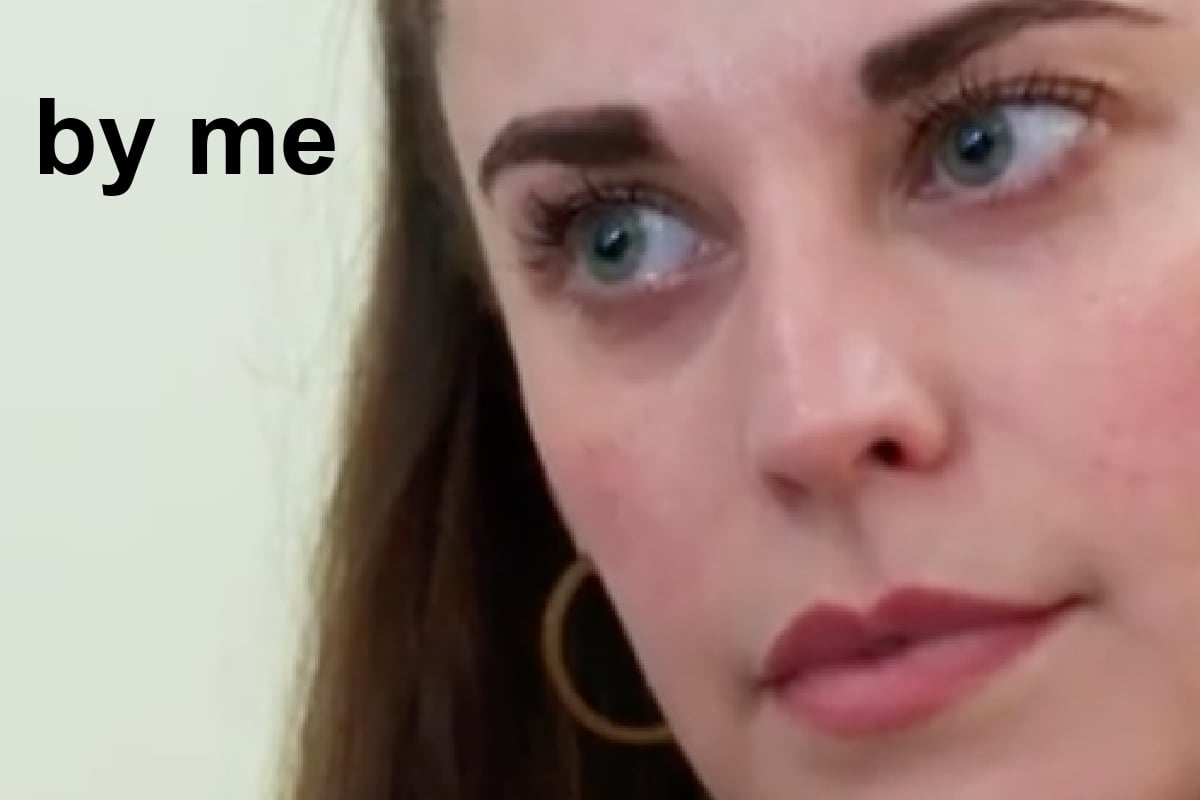 Holly decides to accept Andrew's confession (??), reasoning "he didn't murder someone," and if this is dating for women in their 30s we need to burn it all down.

Now it's Holly's turn to tell Andrew something she's never told anyone, and unlike her husband, she doesn't immediately bring up whether or not he has permission to infiltrate her anus.

"What I most regret is not giving myself a chance of having a child," she says. She admits to "feeling like a failure" because she wants a baby urgently, and lives in fear that her childbearing years are nearing the end.

Andrew is suddenly embarrassed about the time he misread the mood and told all of Australia he didn't, currently, want to be pegged.

He tells Holly he thinks her dream to have a child is "amazing," but quietly admits to the cameras that it's "too much pressure" and he's not sure it's what he wants.

But the producers pause on that imminent catastrophe to take us to Brent and Tamara's apartment, where they're going to re-watch their audition tapes for no reason.

Are the activities during 'Confession Week' consistent? God no. Are they designed specifically for each couple, in terms of what will stir the most s**t? Absolutely, yes.

Tamara thinks her audition tape is honestly the best comedy show she’s ever watched, which is awkward given that her groom is horrified. 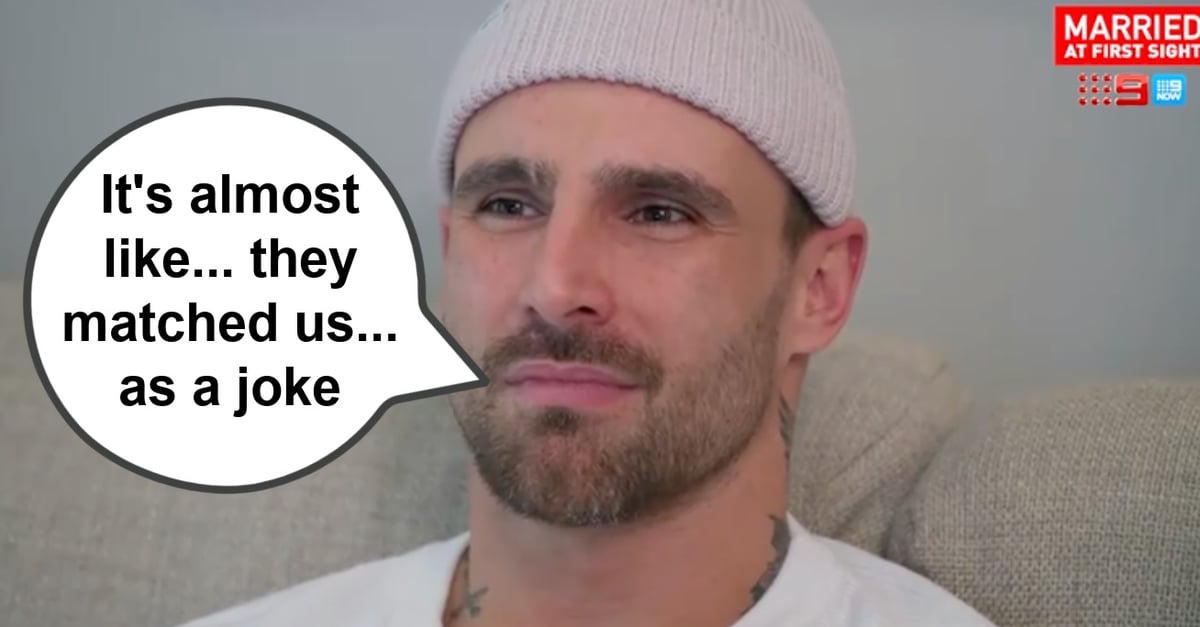 Why would they do that though??? In the tape, she tells the camera her friends would describe her as a "bitch," and says she doesn't want to date someone who doesn't have a good career or money, if they drive an ugly car, or if they wear fake designer clothing.

In her defence, she was trying to get cast on a reality TV show. And it worked.

Brent explains that he doesn't like pretentious people, and Tamara cries and says the reason she wants those things is because of what she's been through in past relationships. She doesn't want to look after people anymore, she sobs, and again, in her defence, there’s a 25-year-old man in the next apartment who just learnt to operate a washing machine. So. 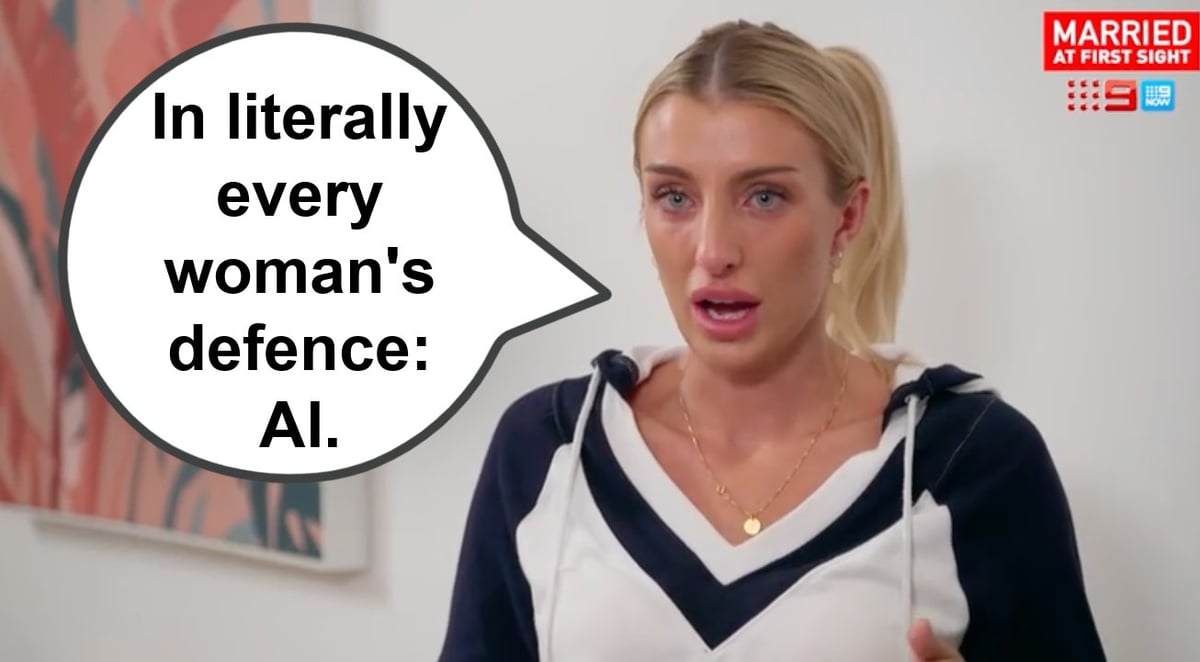 "I need you to understand." Speaking of Al, a letter has arrived at his door and he a) doesn't know how to open it and b) doesn't know what mail is.

But when Al realises the activity is to rate people from hottest to ugliest he beams with joy because, yes, this is something he knows how to do very well. 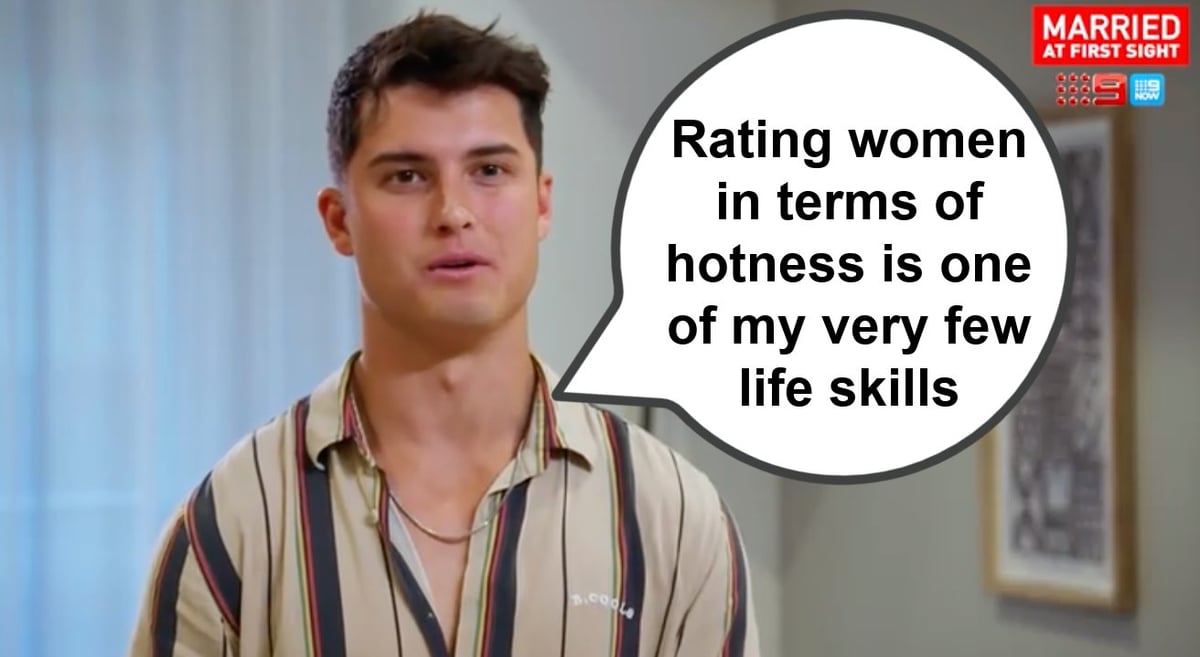 "I think Sam will be both surprised and impressed."

But now it's Sam's turn. And she rates the men in ascending order, from least likely to do a shoey at a dinner party when it's still light outside, to most likely.

Al isn't paying much attention because he's clearing the next room, so there's enough space for Sam to put his picture first by a margin of at least 35 metres. He can barely hear her when she announces that nah actually he's third-ish, along with Jack.

"So, I'm as attractive as Jack," he repeats, as though this is a very funny joke he just doesn't understand it yet.

Sam tries to explain that while looks are important, so too is not doing a shoey. 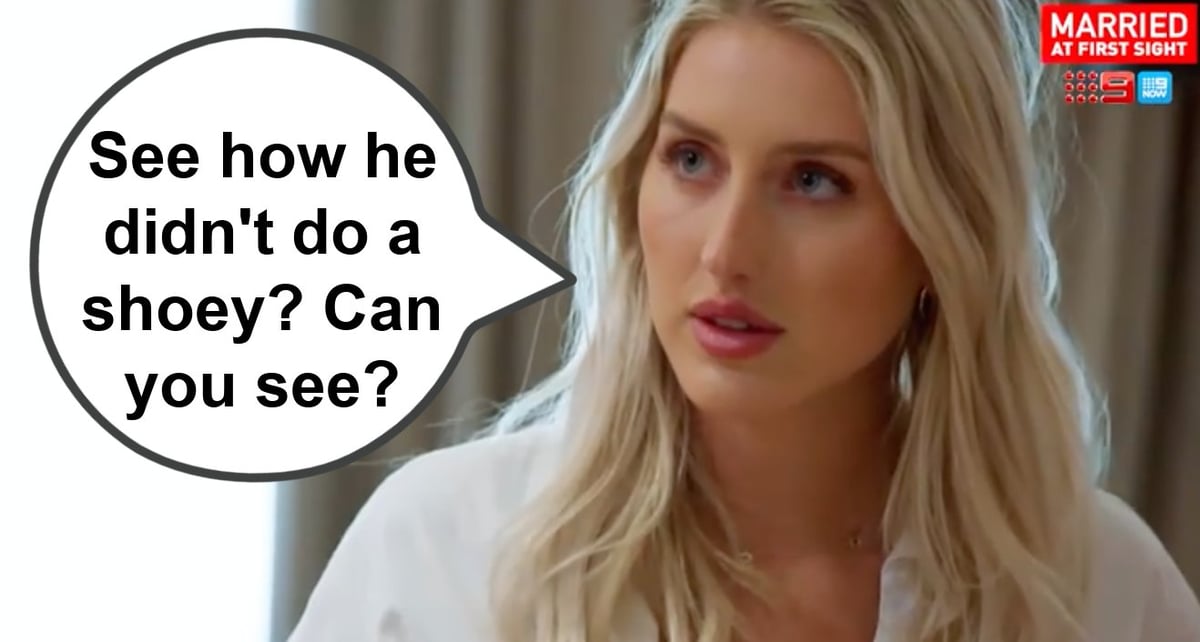 "What can I do to be more mature??" Al wonders aloud and MATE. DON'T DRINK FROM WHERE YOUR FEET GO. THAT'S IT. THAT'S YOUR WHOLE ANSWER.

He slept on the couch last night, and explains "I'm on a different page".

If only there were a panel of experts - say, three - who interviewed and assessed these individuals before matching them with someone who wanted something fundamentally different to what they did. Then maybe we wouldn't be wasting the time. Of a 36-year-old woman. Who's greatest anxiety. Is that she's running out of time.

Andrew explains to Holly that as far as waiting until 40 or so to have another baby, "that's just a number" and NO, SIR. Not for a woman who's been told she's running out of eggs, you entitled little weasel. 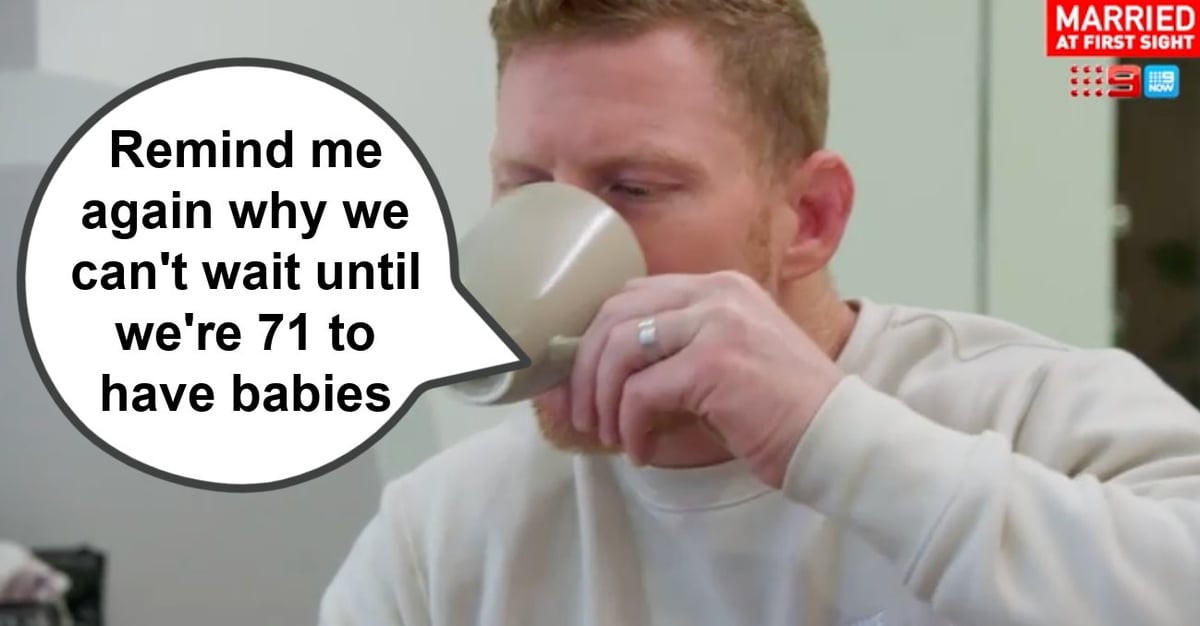 "I just looked at my diary and 2035 actually suits me quite well." While Holly has an emotional breakdown, Andrew appears to be, we don't know, checking his internet banking on his laptop and MATE. WHAT COULD YOU POSSIBLY BE DOING ON YOUR COMPUTER RIGHT NOW. ARE YOU BOOKING TICKETS TO TEXAS? HAVE SOME RESPECT FOR THE LADY WHO DOESN'T HAVE THE LUXURY OF WAITING UNTIL SHE'S 72 TO BECOME A MOTHER.

We briefly switch to Olivia and Jackson, and look. This serious documentary about two kind people falling in love feels very out of place in what is otherwise an outrageous comedy.

Back with Holly and Andrew, a producer has sniffed trouble. There's a knock at the door. 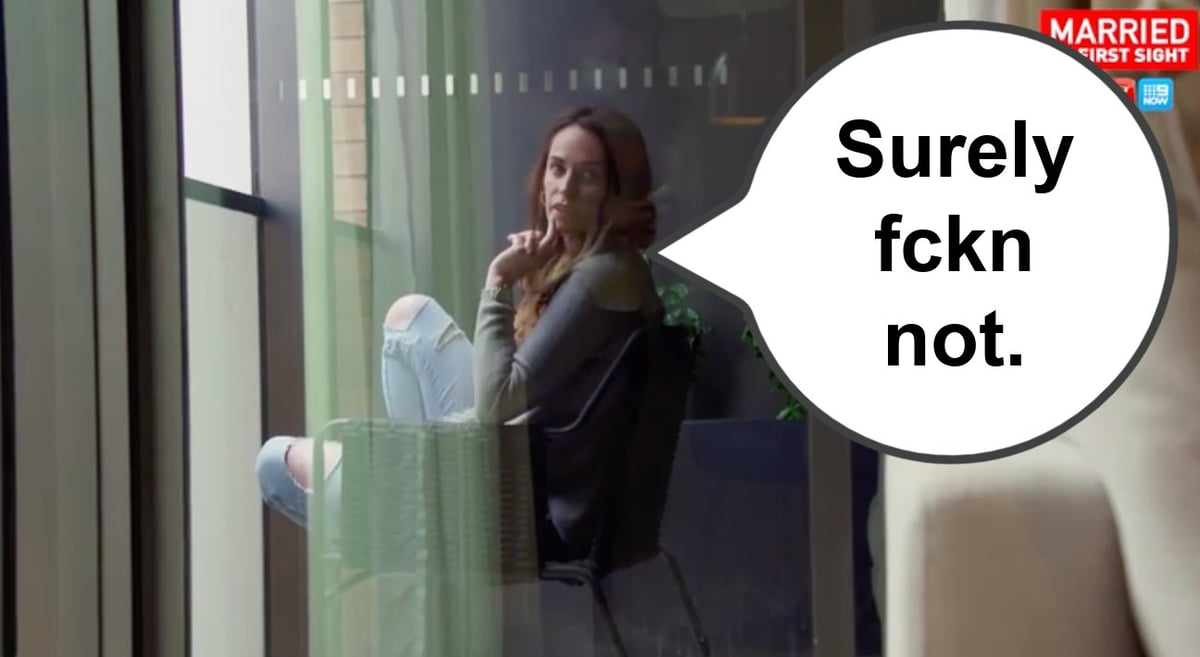 "They wouldn't." Don't let it be the photo ranking task.

Don't let it be the photo ranking task.

Don't let it be the photo ranking task.

You see, Holly is feeling lost ever since she shared her deepest fears with her husband and was horrendously rejected. So the psychologists think it's best to make her rank people. In terms of hotness. To help with that.

Holly quietly ranks the men, and explains that Andrew was at the front, but ever since he stopped speaking to her on account of having needs, he's now second.

Just as a side note; why is he still second?

Andrew responds maturely by explaining, "Your lack of attraction to me is your problem. Not mine. That's a reflection of you," and Sir with all due respect, what the f*ck.

"I don't feel responsible for how you feel," he adds, and no offence but you sound terrible at relationships.

On Cancelled this week, Clare and Jessie Stephens dissect the history of Married at First Sight. Post continues below.

Andrew is ultimately desperate for a peg (?) and we hope he finds what he's looking for.

Listened to Cancelled Podcast? Complete this survey to go in the running to win a $50 gift voucher.