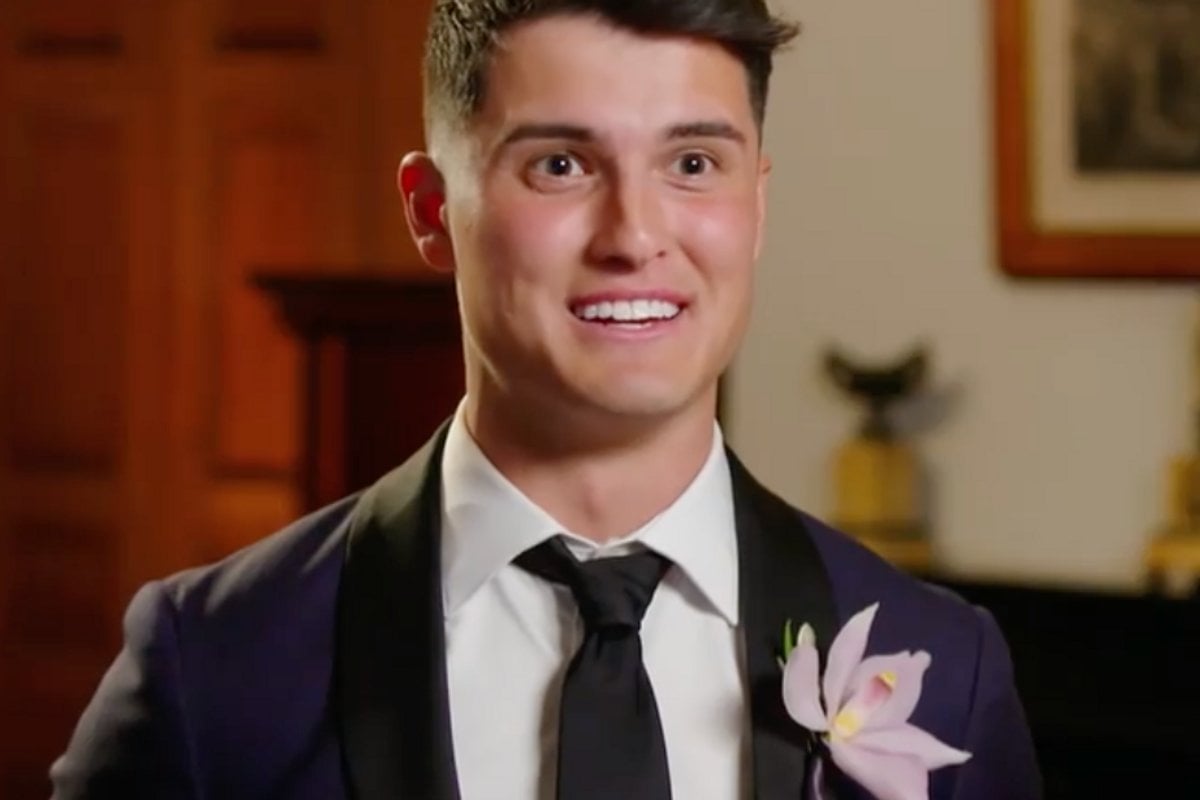 With the honeymoons going swimmingly (Selin is already divorced and Holly will never have sex again) there’s only one thing left for the experts to do: match more couples. In order to increase the statistical likelihood that someone will throw a chair. During prime time.

It appears that this season they’ve entirely abandoned the farce that there’s any science behind their decisions, and instead simply announce two names and discuss what might happen if they got married for no reason.

First up are Olivia and Jackson, who are compatible in that they both applied for this show and fall broadly within the same age group. 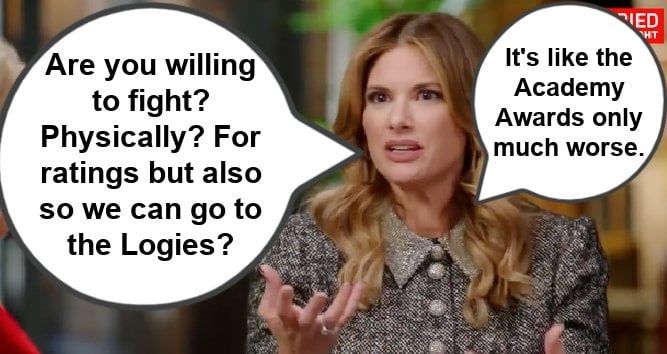 "They call it the 'Night of Nights'."

The main tragedy of Olivia’s life, according to the hen's night, is that she was overweight for most of her life. The editing would suggest this is the worst possible thing that could happen to someone, which is so many levels of f**ked up we can’t even… begin.

This problematic storyline becomes even more bizarre when we learn that Olivia lost her father last year to cancer, and cared for him for seven years.

Is that… is that not the bigger tragedy… or?? Nevermind. Sometimes we focus on the hardship of someone not being a size six and then remember, later, about their father’s terminal illness.

Olivia seems like a genuinely good human which is baffling for us as viewers. 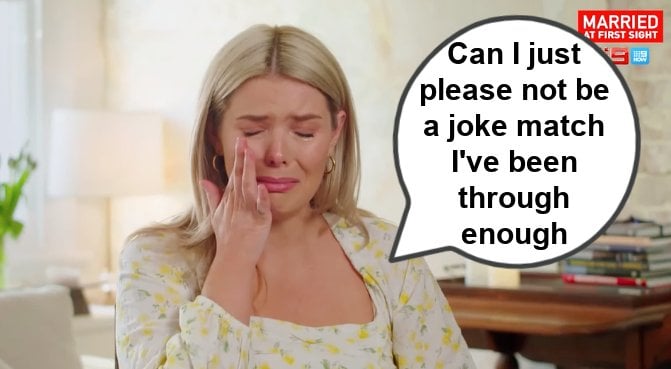 Sometimes, as we've learned, the experts actually try by accident and this appears to be one of those times.

They match her with Jackson, and we’re shown Mel interviewing him and learning about his strong family values. Mel suddenly stops and yells OMG STOP IT, UR ACTUALLY GOING TO LIKE UR MATCH. SHE ISN’T EVEN HERE FOR THE INSTAGRAM FOLLOWERS THAT WE KNOW OF.

Mel, why are you interviewing Jackson now if you’ve already decided who you’ve matched him with? Shouldn’t the interview have… informed the match. Perhaps. 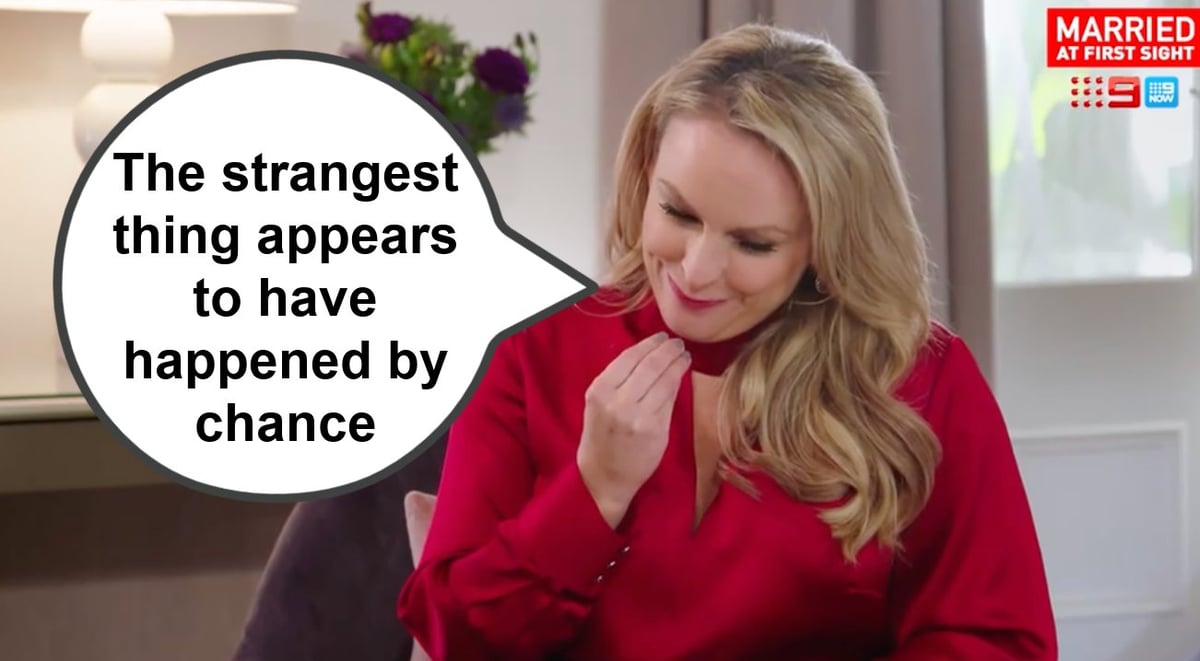 But there’s no time to interrogate the process because it’s wedding time and yeah, Olivia’s mum thinks she ‘gets ahead of herself’ and ‘jumps the gun’ sometimes. Lady, how do we put this. She’s getting married. To a stranger. Chosen by John Aiken. On television. We know.

Jackson doesn’t have any guests at the wedding which is either a sign that he’s kept this embarrassing decision a secret from everyone he knows, or he has a normal family who were like: mate, you do you, but we shan't be attending.

But it's at this point we realise we recognise Jackson from somewhere. His eyes... the shape of his face.

Olivia has been matched with Michael fckn Bublé aka The Boob and we're not mad. 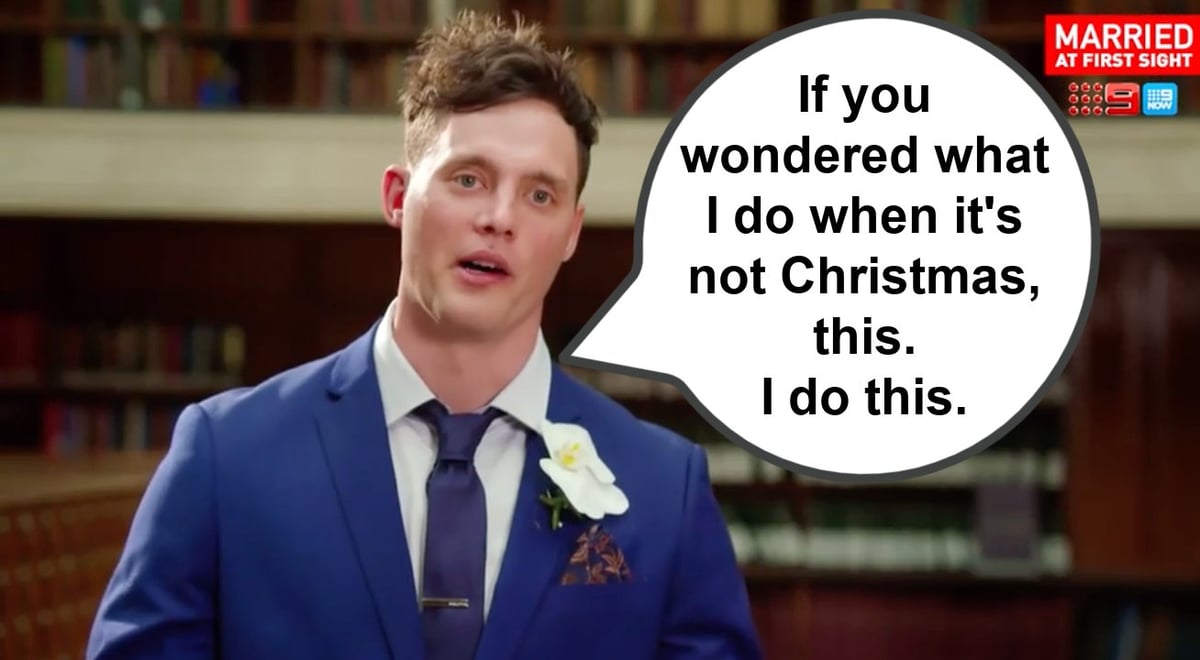 "Honestly the other 11 months of the year are quite slow."

At the reception, Bublé comments “it’s so intense meeting the family on the first date” and okay this isn’t a date this is literally your wedding and are you gonna sing a song or what.

Olivia's mum is then asked told by a producer to please interrogate the kind man her daughter married. But there's a few problems. The first, is that she really enjoyed his Christmas album. The second is that she doesn't know how to do an interrogate. Because she's a normal woman. So she angrily asks questions such as "is your dog male?". And yeah. He is. He's also a rescue. So Olivia's mum is very sorry about raising her voice.

We decide that if the experts bring Olivia happiness then we can almost forgive them for everything else. Of which there is a lot.

The morning after the wedding, a producer corners Olivia in her pyjamas and demands to know who put what genitals where last night and can we please leave this poor woman alone she deserves a fckn break. 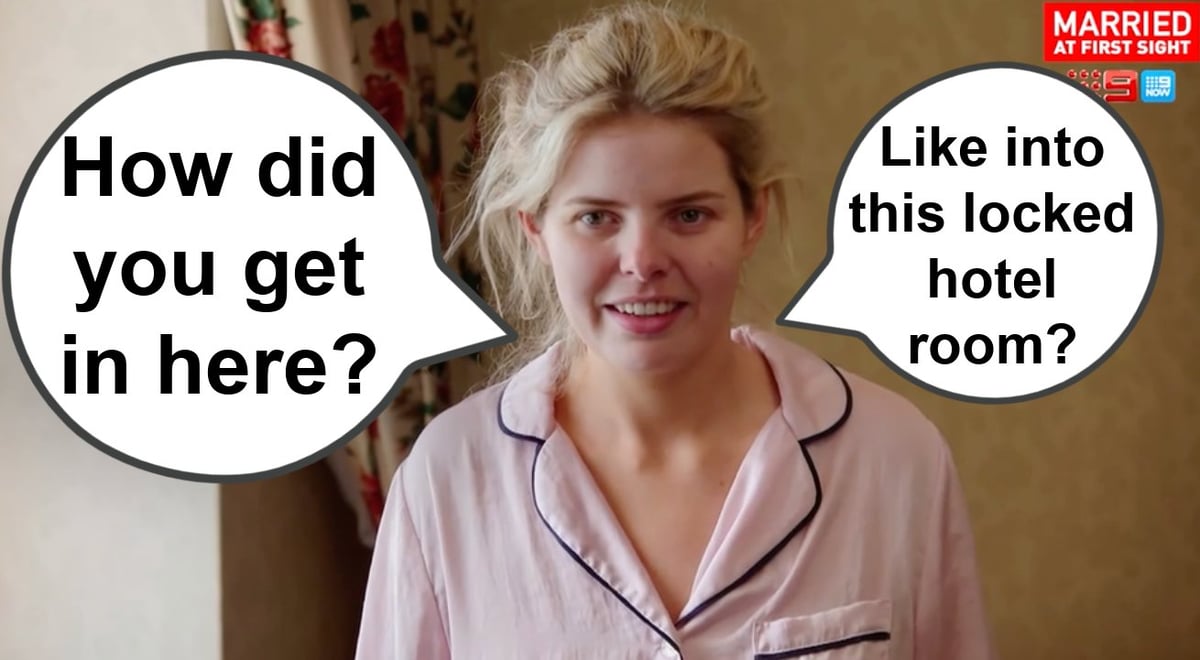 They head to their honeymoon, where Olivia shares her body image insecurities and Bublé reassures her. Imagine that. Telling your wife you think they’re beautiful and amazing and not that you find them unattractive and think they’re fundamentally bad at sex.

But there are only so many people who apply for Married at First Sight for a reason other than fleeting Instagram fame. Michael Bublé, you see, is already famous, so doesn't need the exposure. That's why we trust him.

Al on the other hand.

Al is 25, has never been in a relationship before, and thinks his best qualities are a) his body, b) his face, and c) his personality, sometimes. His insecurity is his legs because they’re not quite as muscly as he wants them to be and quick question for the experts: how dare you.

Al looks like someone we’ve matched with on Tinder 10 times who we thought was maybe a bot.

During an interview, Alessandra is shocked that Al hasn’t ever had a girlfriend before and AGAIN. Why do you have no basic information about this person before you sit down, physically, in a room with him?

For some reason when he says he wants someone ‘independent’ and ‘capable’ Alessandra writes it down on a notepad as though those qualities are at all going to influence the woman they’ve already chosen to pull an elaborate and very unfunny practical joke on.

"I want to get married and settle down," he tells the camera and Jesus Christ Sir not even you believe that.

It’s some poor editor’s job, however, to make it look like the experts are trying. So we’re introduced to Sam - a regional manager for a luxury brand that doesn’t want to be named on a TV show that will inevitably tarnish its reputation. 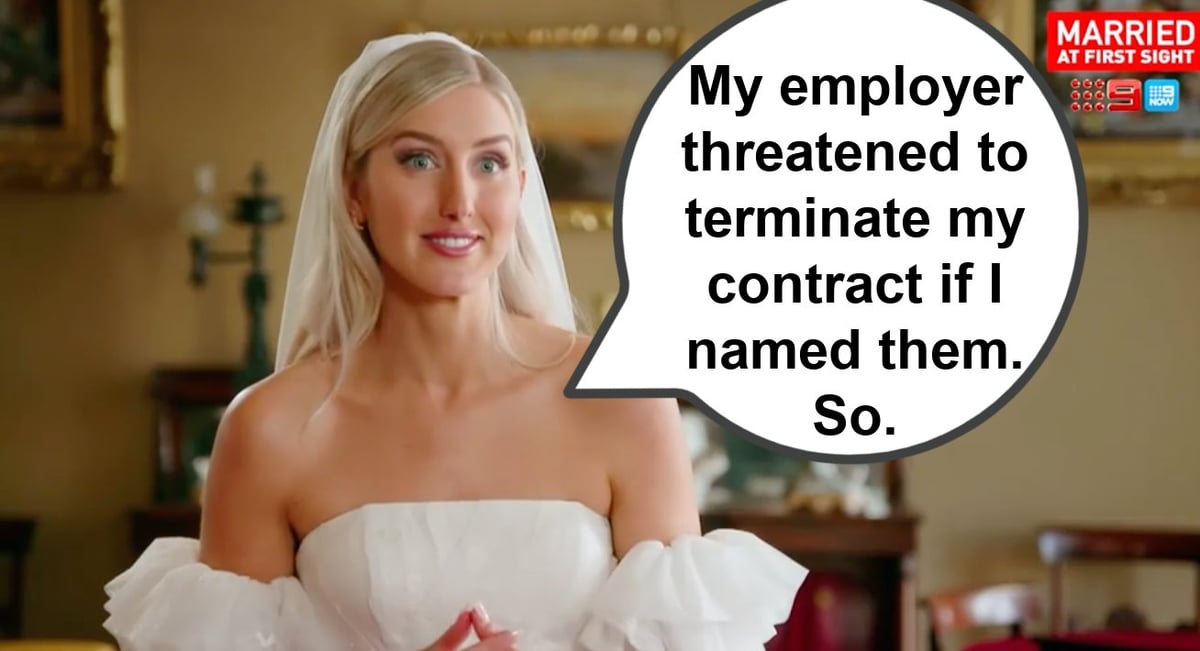 "They full got a lawyer involved."

Sam tells the cameras that one day, she was reading her ex’s diary (lady, why) and it said ‘Goals: propose to Sam. Rome?’ but then he cheated on her. After such a traumatising experience, apparently what she needs is to be paired with an aspiring Instagram model on the television whose mother - and we quote - describes him as a “big baby”.

This woman has only just recovered from her last heartbreak and now the experts have done Al to her.

Can he cook? No. Can he clean? Also no. But people on Al’s Facebook are getting engaged and having babies so that’s why he’s here.

It’s the wedding day, and Al’s mum is looking at Sam’s friends with an expression that says: no. You don’t understand how incompetent my son is. I need you to understand. 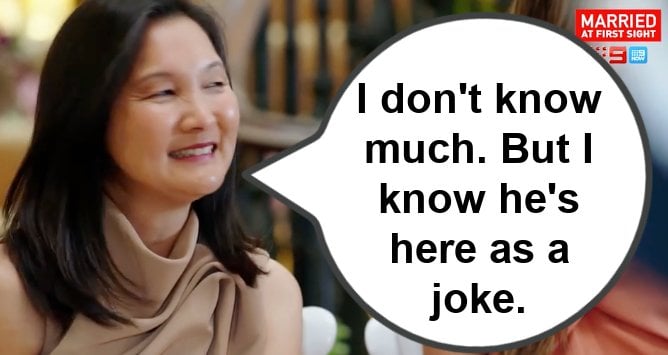 "I don't get the joke but he and John Aiken seem to think it's funny."

When Al arrives at the altar, he asks Samantha’s friend if she’s the mum and FOR FUCK’S SAKE WE WOULD GENUINELY NEVER FORGIVE HIM. We feel like someone needs to tell Sam that her marriage is already ruined and she hasn’t even arrived.

During the ceremony, Al makes a joke that he remembers her from Schoolies and dear God Sir you are so young. Sam's vows are about vulnerability whereas Al appropriates the words of a great philosopher best known as 'Eminem'.

"It’s like… are you even emotionally mature enough to get married?" Sam asks the cameras and in short, no. No, he is not.

Despite the fact that Sam is frantically googling ways to annul a fake marriage, Al is thinking about how lucky Sam is to be matched with him, especially given he should be getting free HelloFresh in no time. 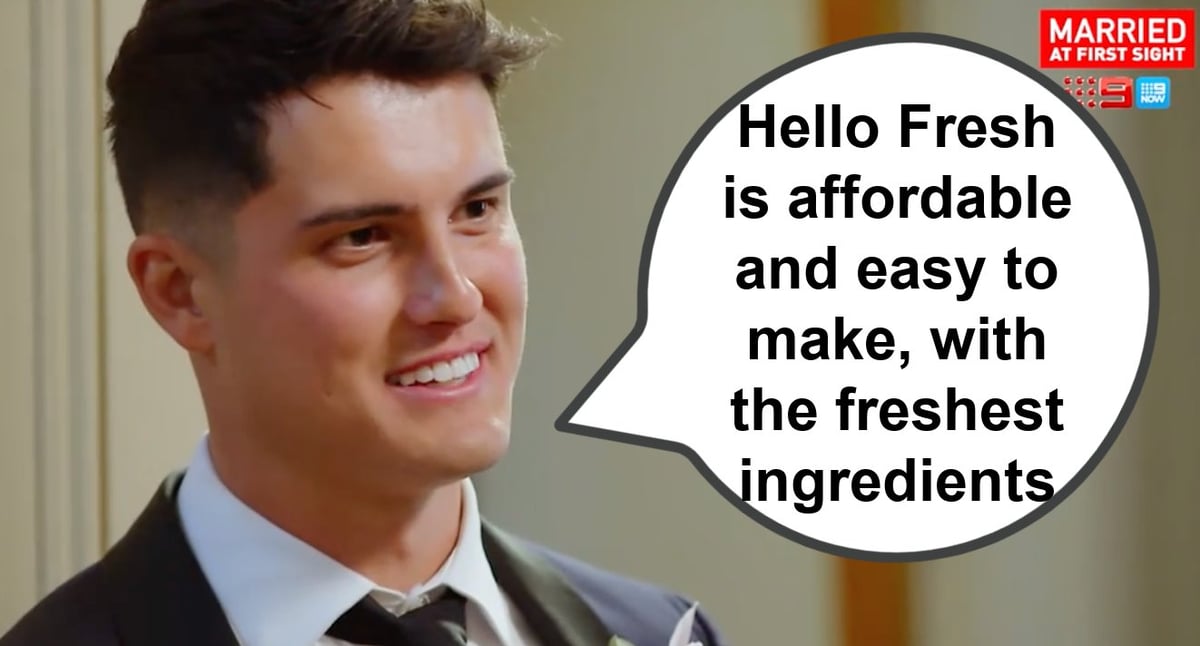 "Tonight I made a curry in just 15 minutes!"  During their wedding photos, Al inexplicably starts doing push ups. If you look closely, you can see the moment it registers on Sam's face that she is the butt of one of John Aiken's very elaborate jokes. Where he matches you with an idiot. For the ratings.

Sam refuses to kiss him for the cameras, and Al is bewildered. “It can’t be because she doesn’t like me,” he reflects and no it really can.

At the reception, Al’s mum makes a harrowing speech. “When [Al] gets back from a hard day’s work he just likes to relax with his computer games… have his dinner served and his lunch packed for work the next day,” she jokes, but there’s one person who isn’t laughing and it’s literally all of us.

Despite her insatiable urge to jump out of the nearest window, Sam asks Al if he knows how to dance. He gets down and does the worm and we want to die. 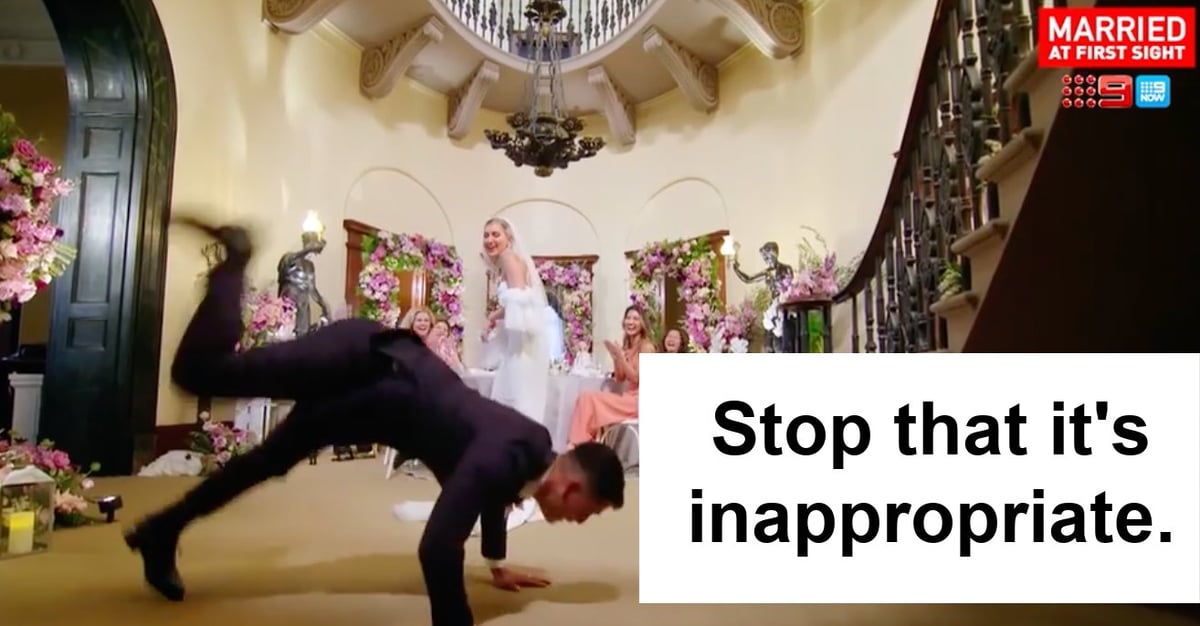 No. At the end of the night, Sam tells Al that while initial attraction is good, it’s not enough to sustain a relationship. She needs emotional maturity, for example.

Al is… shook. How does he… maturity? Can’t she see his face? And relatedly, his body? And to a lesser extent, his under-defined legs?

As their wedding night comes to an end and Al and Sam head off on their honeymoon, Sam decides she quite likes Al’s sense of humour. But we’re not… certain that he’s being intentionally funny. We think he might be very serious. But everything he is saying is stupid. Which can be misinterpreted as 'jokes' to new people.

On the honeymoon, Al tries again to kiss her on the lips, but she refuses.

She knows something fishy is going on.

We don't know Al personally. But we know him metaphorically.

He really wants to land that HelloFresh partnership and make $3 from every box sold.

Furthermore, he absolutely did not delete Hinge off his phone before coming here. There’s a pretty lady on there that he’s been talking to this whole time. In fact, he slept with her three nights ago.

So he’ll be fine. And Sam will be left wondering: wait. How am I still single when that man quoted 'Lose Yourself' by Eminem on the television? And we don’t know, Sam. We don’t know.

But we are truly sorry.