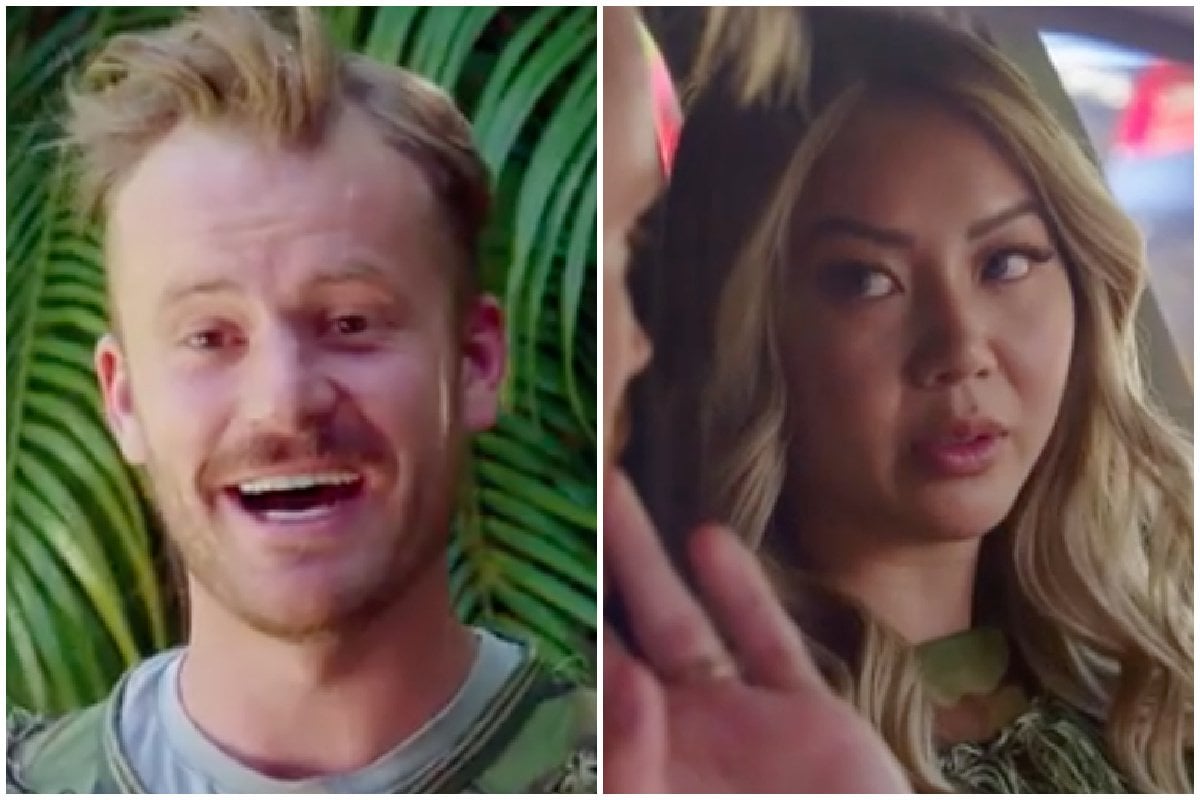 We open on Tamara and Brent watching the sunrise in Bondi which Tamara ought to know costs at least $650 a week to witness.

But suddenly, Tamara spots something in the water. She announces that it's a dolphin. But Brent insists it's a sea lion.

OK so Tamara doesn't believe sea lions are real things which isn't a subject you get to have an opinion about?

A producer calmly asks if she believes in seals to which she replies like obviously yes?? But lady you can't just deny the existence of sea lions when there's one literally right there within ear shot.

"Your voices really carry." Meanwhile, Mitch and Ella are visiting Johana, a psychic medium, in an attempt to gain some "clarity" by asking someone about their future who is, for legal reasons, required to be vague.

"Is it a dream of yours to swim with dolphins or whales?" Johana asks the beachy looking young man in front of her, to which Mitch replies, "No".

So far so good.

But ALERT ALERT because she "sees" something alarming and excuse us ma'am is it John Aiken?? 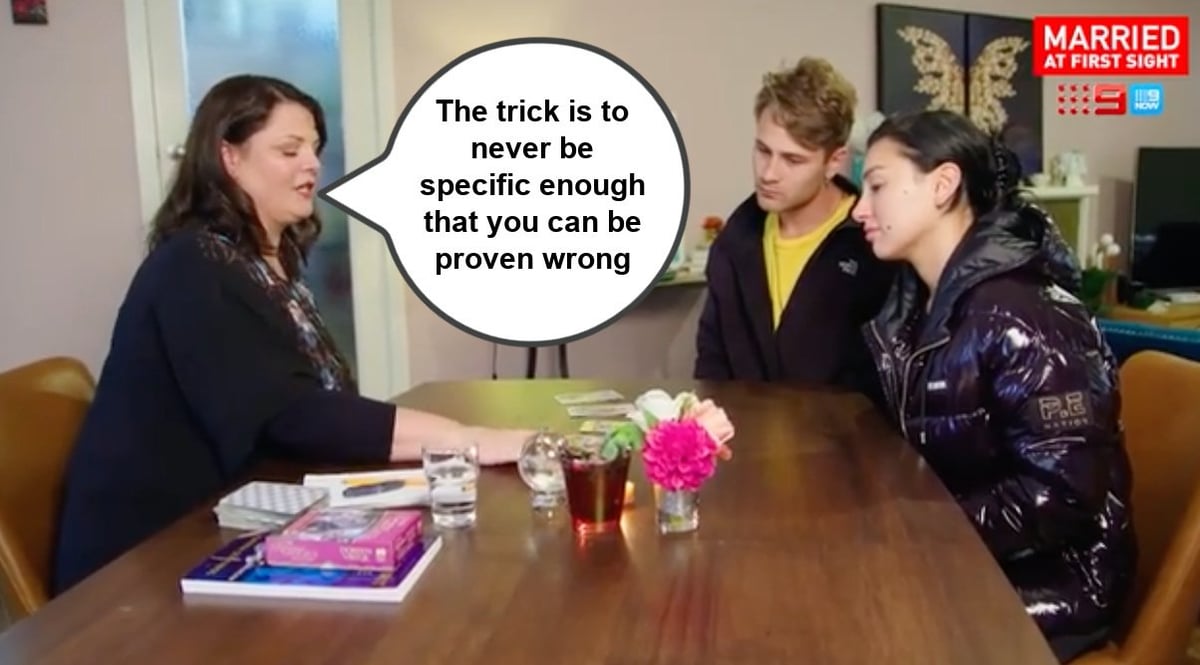 "Did I say dolphins? Or did I say... saxophone?" On the way home, Ella tries to explain to Mitch that she was right about the dolphins/whales because Mitch went swimming that one time? In the ocean? There might've been a dolphin, over there, behind the wave? You never know.

Speaking of swimming, Al has organised an activity for Sam, his wife who has now officially tried to leave him two (2) times.

They're going snorkelling and with all due respect you don't need to go on Married at First Sight to snorkel like it's fine. Just do it on a Saturday. With friends.

They dive in and Al inevitably gets too close to the coral and Sir you're going to cut yourself and disturb the marine life.

Sam has to blow up his floaties and put sunscreen all over him while he wriggles like a worm and sometimes it is just simply too hard to take a toddler to the beach. It's not relaxing. 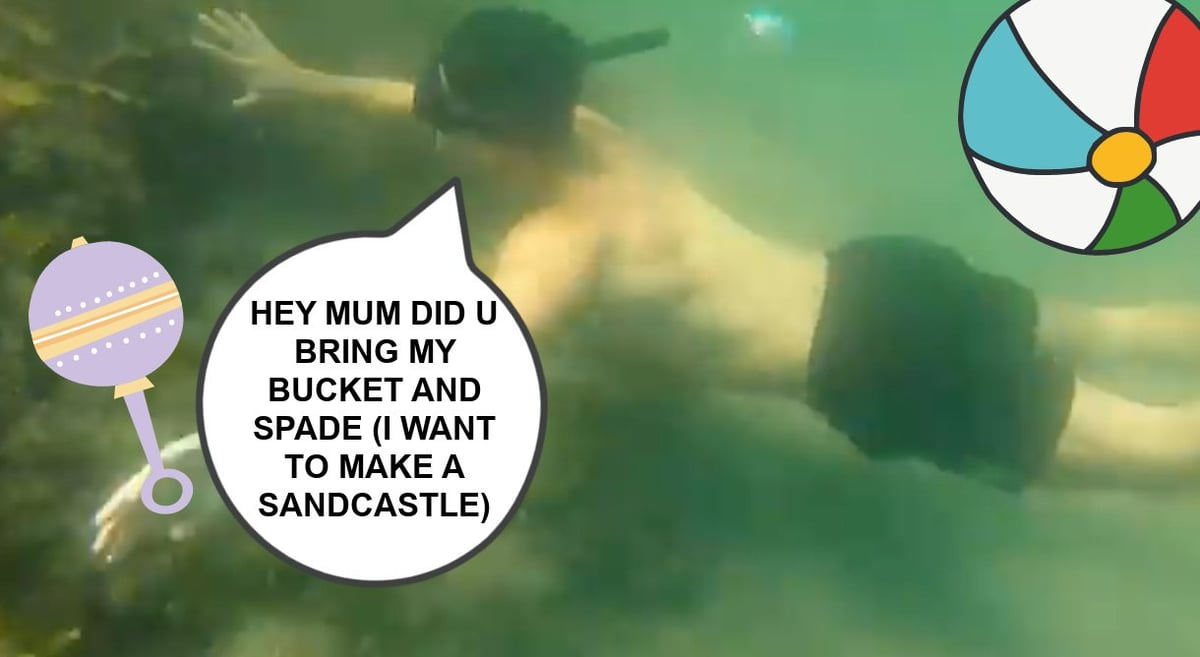 "Mum mum look at me swim mum." They have a nice enough time and enjoy a picnic afterwards, but Al has too much pink lemonade and becomes over excited. He announces they've been together for two months now and OK but for at least one of those months Sam's been actively trying to break up with you.

Over in Cody's disgusting apartment, it becomes increasingly clear that the man needs to sort himself the f**k out. 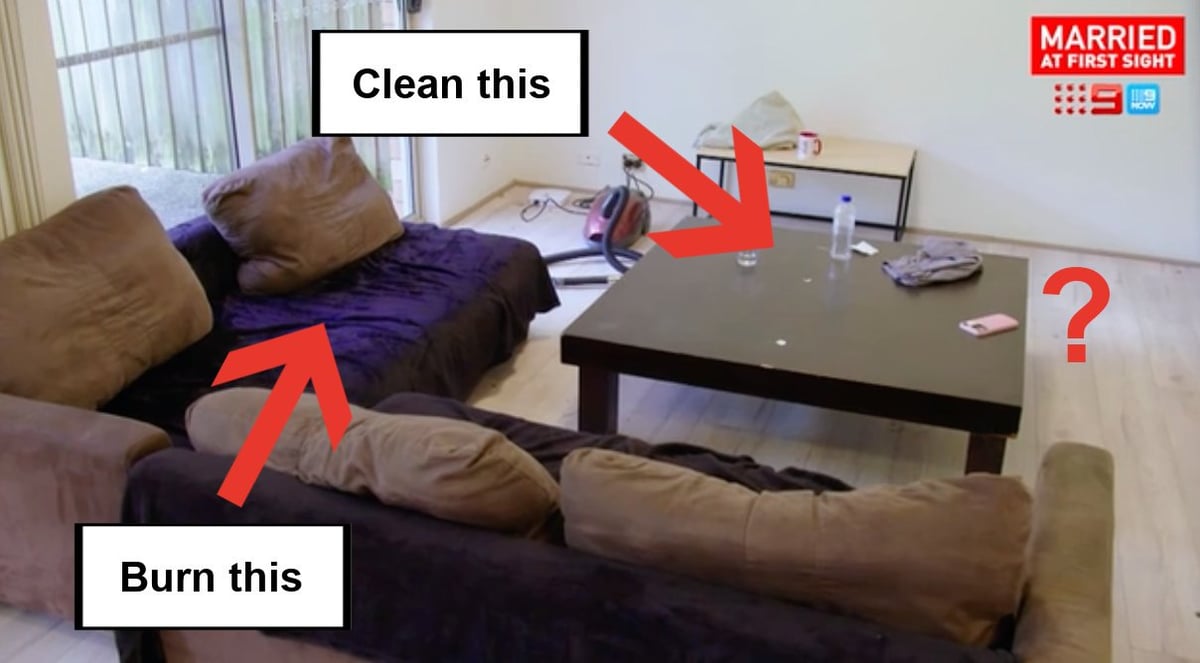 "Disinfect this." No wonder he went on Married at First Sight. He needs a few UrbanYou discount codes to clean his house??

There are containers of what can only be described as white mush in his fridge and when Selina sniffs inside she nearly vomits. The fact she hasn't left yet - despite Cody's home being a literal (and perhaps functioning) crack den - is a testament to the standards women in their late 20s/30s have been taught to accept.

Cody decides to evade police by inviting Selina to his mum's house, but there's a problem. He refuses to give anything to anyone, socially. Selina smiles and pretends things are fine but the man is barely speaking to his mother and why must this play out on television it feels unnecessary.

Meanwhile, Domenica has arrived at Jack's house. But Jack has a snake. And absolutely not. To that... pet. 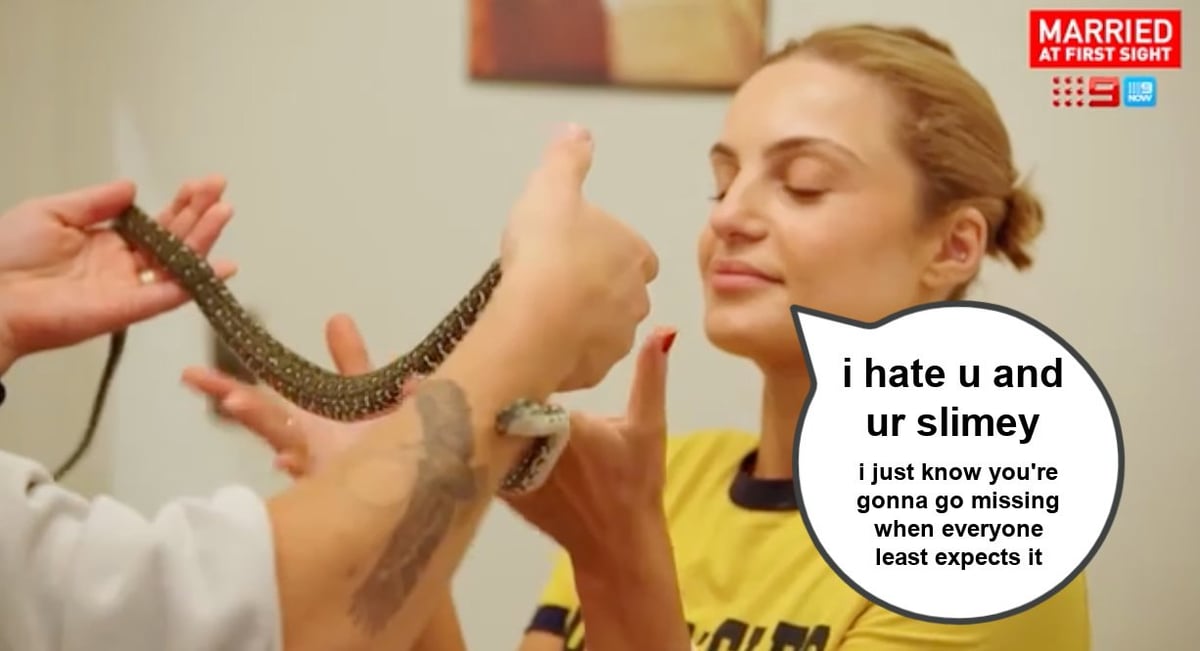 "Ur not a pet ur a predator." He makes Domenica hold it and she squeals because it's cold and wet and okay that is really upsetting.

That night she doesn't sleep because the snake is watching her.

Cody feels guilty about the time he married a stranger and then made her visit (and clean) his crack den, so decides he'll make up for it by pulling a prank on her, and pause.

As Selina puts on her 'swamp monster' costume, she yells that it stinks and of course it does. It's exclusively used for pranks? So it smells distinctly like socially uncomfortable man who's fundamentally questioning the ethics of what he's doing. 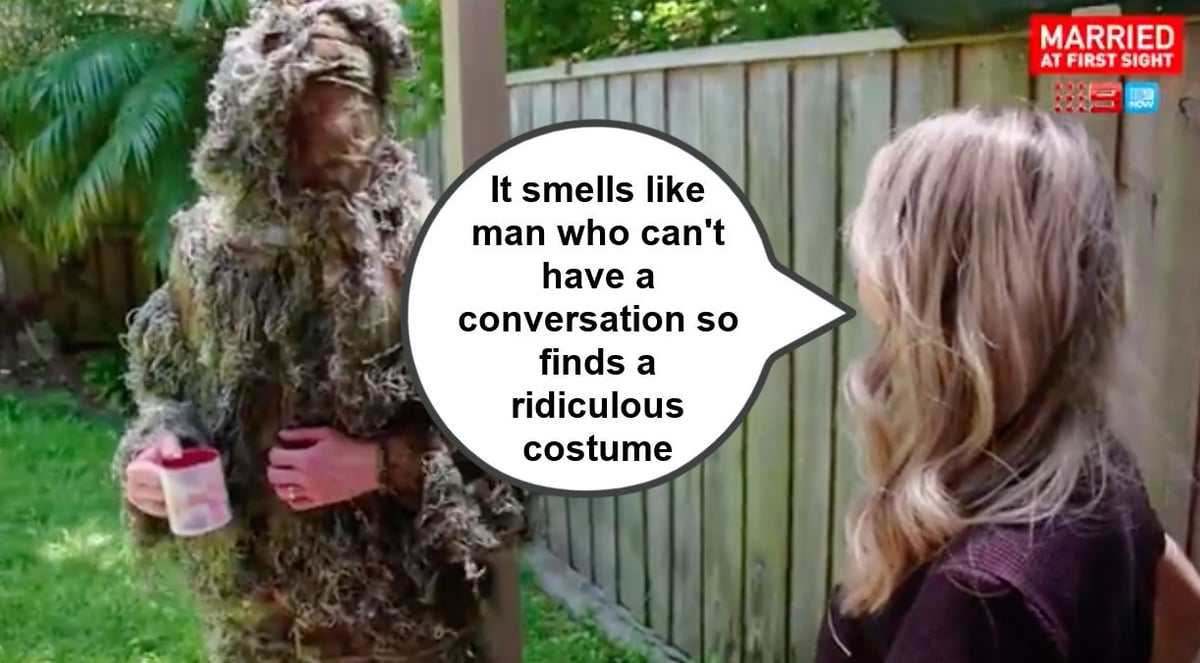 "And body odour. It smells like body odour." "It's good banter," Cody says and where is the banter tho.

But when they get into the car, Cody has taken his swamp outfit off. Leaving Selina wearing a swamp outfit alone. Like an idiot.

She asks why he isn't in his swamp outfit and he's all like "nah nah we're good to go" and firstly a) where are we going and b) no one is good to go.

Selina begins to piece together the offensive picture hanging in Cody's room, the batman sheets, the absurd mess and now the swamp costume and determines that maybe, perhaps, she is being made fun of. 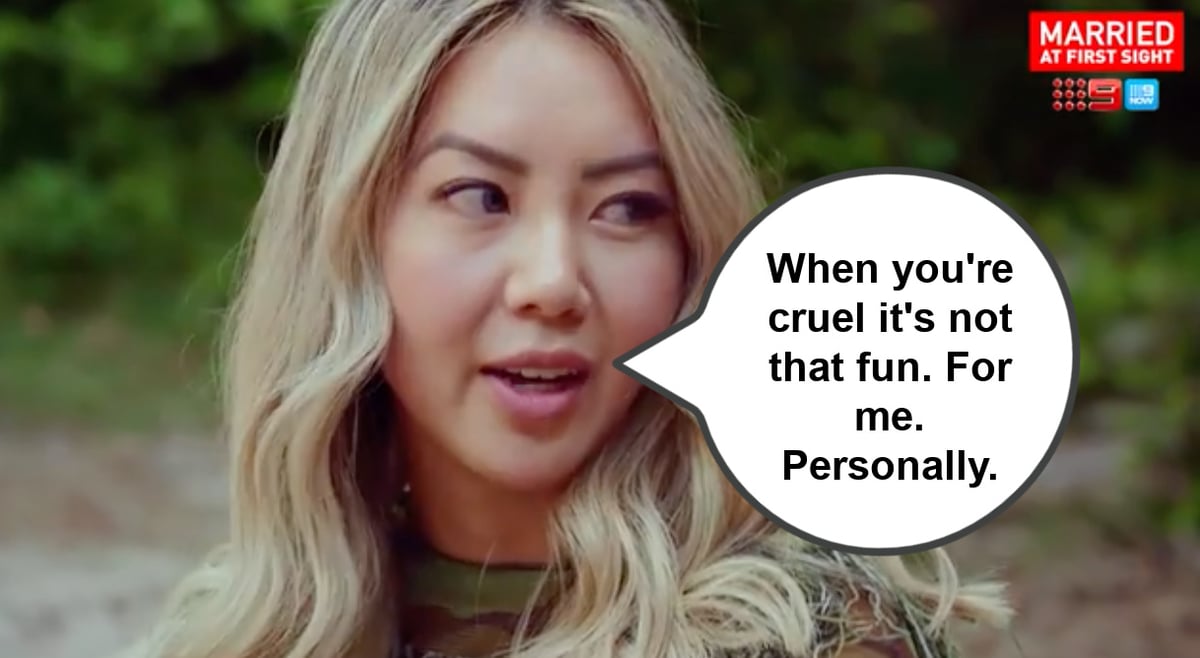 Suddenly outraged about why she's wearing a swamp outfit for no reason, Selina exits the car, and if there's anything more embarrassing than seeing a prank gone wrong, we've certainly never seen it.

Over with Jackson's friends, Olivia remarks "we've been doing really well," with the tone of someone who wants to die.

She explains that Jackson forced her to go to the gym with him and she hated it and everyone's confused. They're like... wait. Why doesn't Jackson just go to the gym on his own? Like a normal person?

But Liv doesn't stop there. It would seem she wants Jackson to stop going to the gym altogether because he's married now. 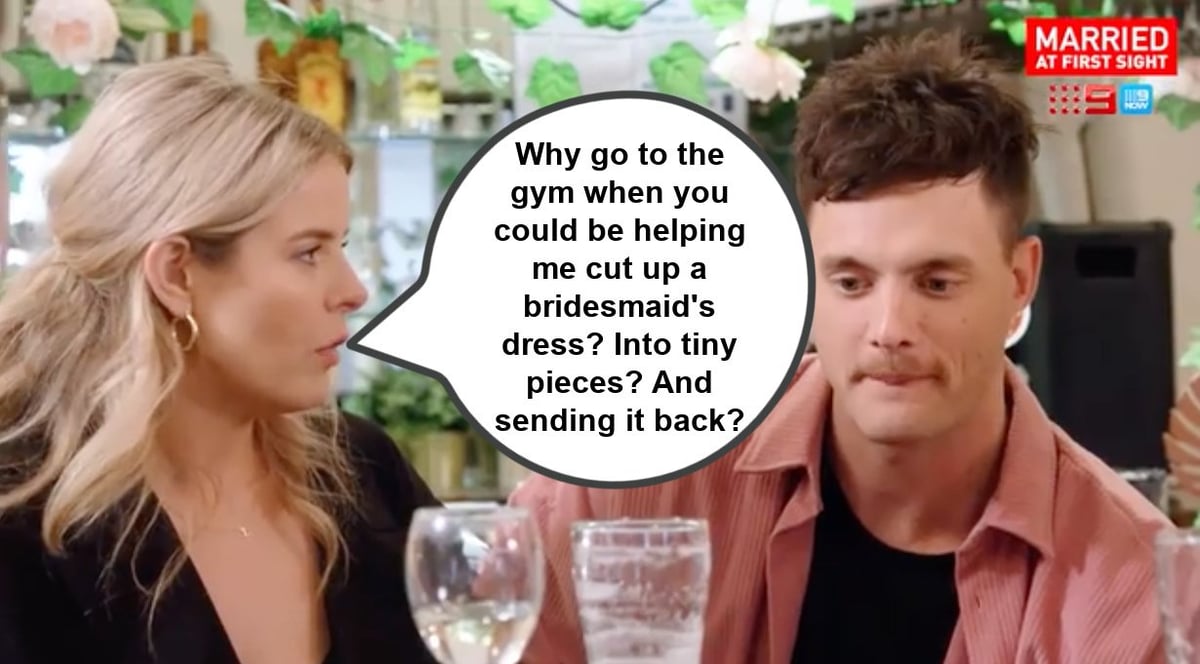 "Isn't that a fun? Couples' activity?"  She explains she's not going to sit around waiting for him to come home and it's like isn't the gym a thing that happens like an hour before you've even woken up, like just sleep, idk.

Attempting to apologise for the swamp fiasco, Cody brings Selina to meet his Uncle John.

John decides to open up about how he regrets not hugging people, like his daughters, more throughout his life and omg John can you speak to our dad and relatedly every other man we've ever met??

Cody misses his opportunity to ask uncle John what he personally makes of swamp costume pranks but we think he'd advise against... that.