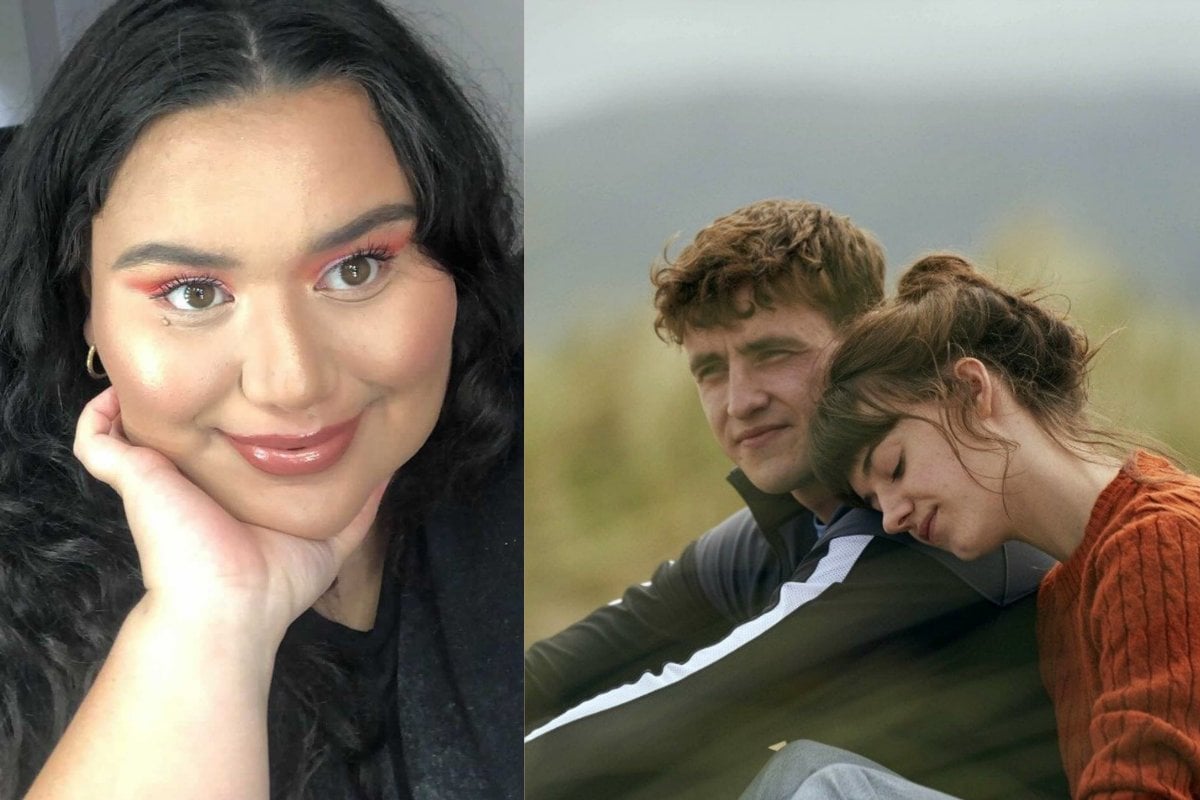 I have a confession to make.

I'm terrible at watching TV. Technically, I do actually watch a lot of it, but I am pretty crap at staying invested.

It's such a bad habit, that my housemates, friends and family have all called me out on my continuous nodding off during the climax, or the fact I am usually diverting my eyes to my phone instead.

My only defence is my impossibly short attention span (I'm working on it, okay?!). But that's not important. What is, are the TV shows that have managed to keep my interest from beginning to end. It's an extremely difficult feat. But there are a few.

To be exact, there are six that I can promise kept my eyes glued to the screen right from the beginning, and all the way until the glorious ends.

So without further ado, here are my top watches of 2021. I would highly recommend every. Single. One. 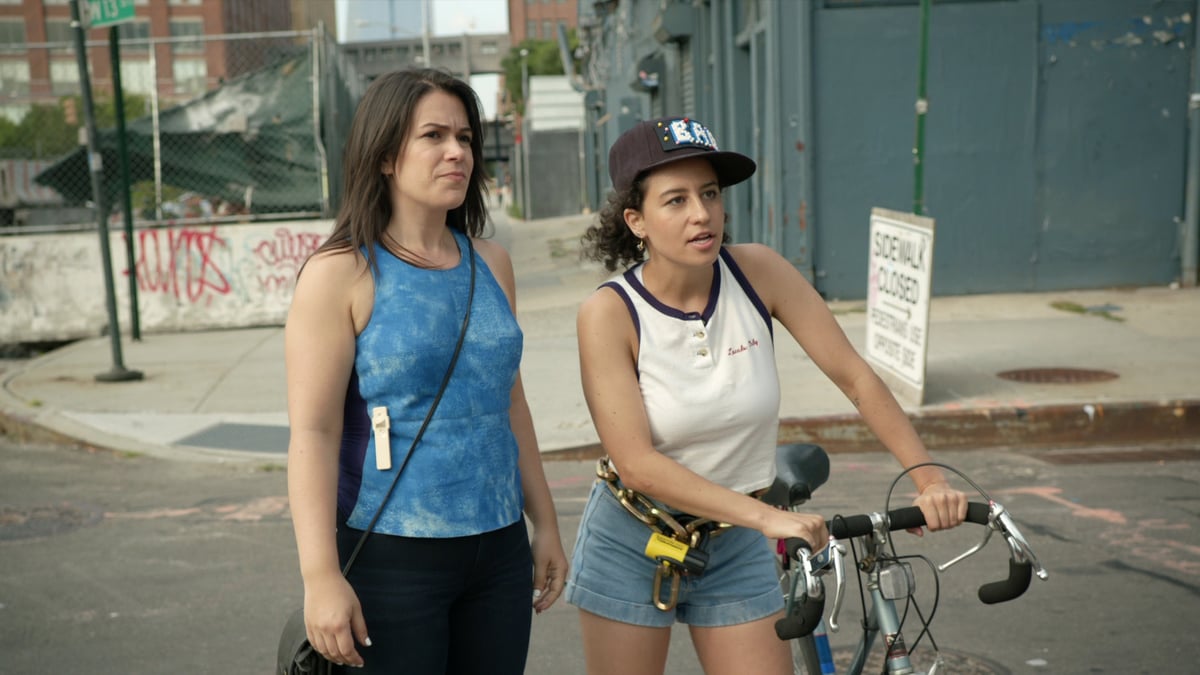 Broad City has been the show I go to when I need a good laugh... Or to feel like I am not alone in being a complete mess. Image: Stan.

To be fair, I started this show years ago. But I've watched every season so many times in 2021 alone, that it had to be included.

Broad City follows the lives of two friends living in New York. Abbi Jacobson and Ilana Glazer. They're not natives to the Big Apple but considering I've never stepped foot in NYC, it's not like I would be able to tell the difference if they were, anyway...

It's kinda lowbrow, it's proudly politically correct, and it's definitely not family friendly. But that is entirely the beauty of Broad City - it was made for those looking for something better than a wholly unrealistic "20-something living in New York" rom-com.

They're not sipping on expensive lattes and going to their over-priced gym in their over-priced athletic wear. They're sexually frank. They're not making tons of money. They're crude and they're messy. They're stuck in dingy apartments with sh***y housemates, and they have crappy jobs. Because they're in their 20s. And 20s are about making mistakes. And trust me when I say, that for Ilana and Abbi - there are a hell of a lot of mistakes to be made.

Overall though, it's a show about true, unrelenting friendship. It's an ode to women, and it perfectly encapsulates how most of us think today.

But besides that, it's just a VERY good watch.

You can check out all five seasons of Broad City on Stan. 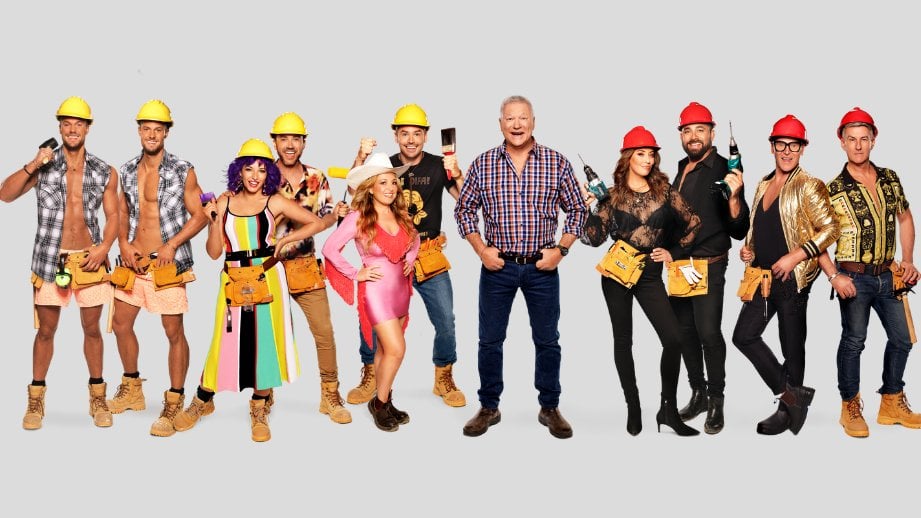 I promise the show is better than the publicity picture... Image: Channel 9.

I'm not ashamed to say I dutifully sat down to watch The Block with my housemates every Sunday-Wednesday for 12 weeks straight. What I AM embarrassed to admit thought is that I ugly cried watching Ronnie and Georgia place last in the competition...

Basically, if you're not in the know, The Block is the ultimate renovation show where either four or five pairs renovate and style what I would call an "utter tear down" property. The show is tough, and all the contestants are pushed to their absolute limit. There are catty fights, betrayals, endless bickering and glorious room reveals each week.

And I hang onto every single second.

I'm so invested in The Block, that my housemates and I quote iconic arguments between the couples, wrestle with the idea to renovate our rented-bedrooms to resemble Mitch and Mark's master bedder on a daily basis, and I bet I could name every single sponsor they've had on the latest season.

Some would call it garbage TV. But it got me through the hardest parts of lockdown in 2021, and I feel a gigantic Block-sized hole in my heart now that it's all over.

Maybe I just have a soft spot for The Block, but considering its finale episode raked in a whopping 1.8 million watchers - I dare say I'm not the only one.

All 17 seasons of The Block can be found on 9Now. 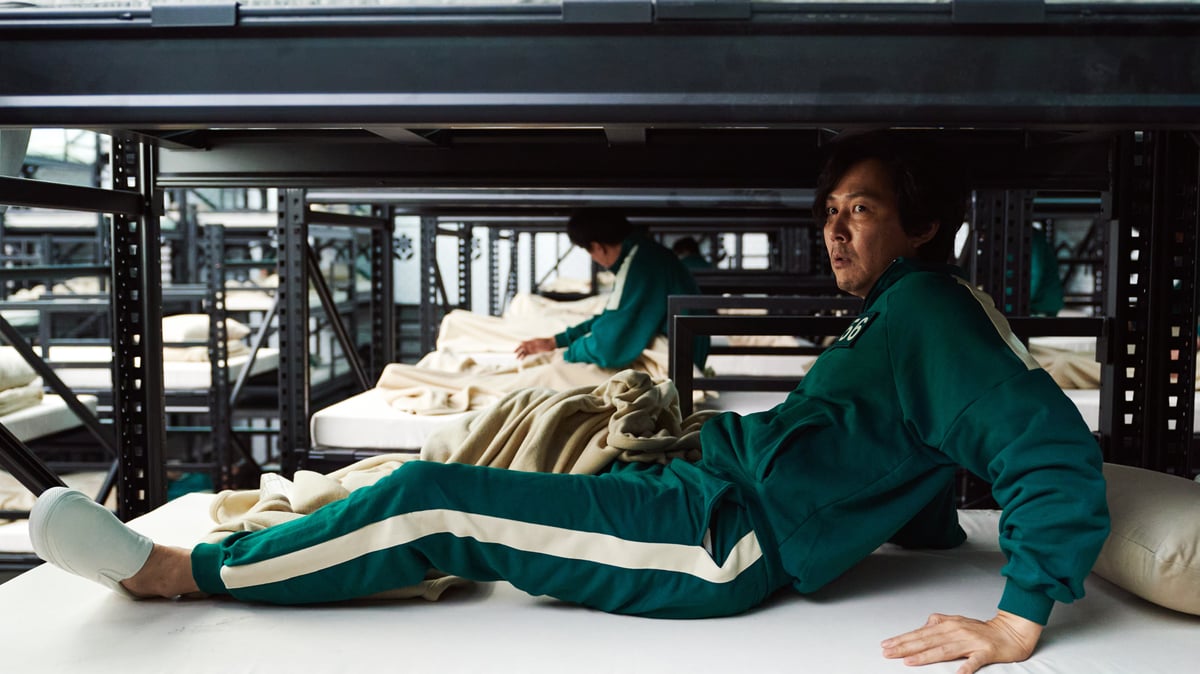 Squid Game is the most watched show on Netflix, ever. Image: Netflix.

I don't want to be crucified when I say I didn't absolutely love Squid Game... but I didn't.

South Korean programs are some of the best of the best, there is no denying that. But the ending was super frustrating for me.

Does that mean I didn't watch every second? Absolutely not.

Up until the last episode, I found myself begging to watch one after the other. I devoured the whole season in two days. It was truly the definition of not "being able to tear my eyes away" for me. Despite my personal feelings, I'd be lying if I said it wasn't a great piece of television.

Basically, Squid Game is a psychological drama that follows gambling addict Gi-Hun deep into a world of debt he finds himself unable to get out of. But then, it seems the opportunity of a lifetime falls in to his lap when he is asked to join a game where others, just like him in South Korea with huge debts, are able to compete in a series of kid's games for a ₩45.6billion (AUD $53million) cash prize.

There is one catch though - if you lose, you die.

Listen to Kee Reece and Laura Brodnik's entertainment podcast for Mamamia, The Spill, where on this episode they discuss Squid Game. Post continues after audio.

It basically is a dystopian take on the horrors of capitalism and how some must be sacrificed for the greater good of greed.

It can leave you feeling icky at times, if not downright sick to your stomach. But for creator and director Hwang Dong-hyuk, that is exactly how you are supposed to feel when watching Squid Game.

While I am not the Squid Game's biggest fan, I'll admit that if there is indeed a season two - I'll be tuning in along with the rest of the world.

If you haven't watched it (which would be shocking considering it is the most watched program on Netflix ever), you can see Squid Game all for yourself here. 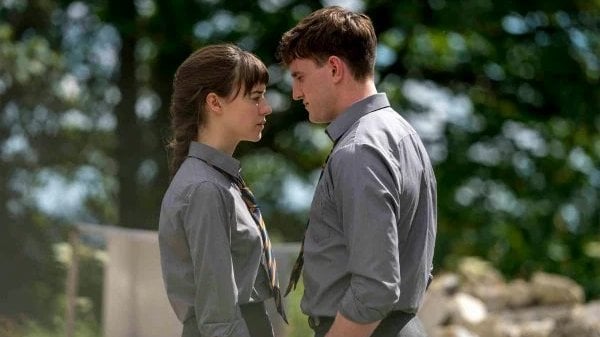 If you want to be a weeping mess, please watch Normal People. Image: Stan.

Somebody get the tissues, I've just used up my third box!

You see, Normal People is the show to watch if you feel like crawling into your bed and never getting out again. Maybe I am being a little dramatic, but it was just so heart wrenching.

Normal People is based on the book written by Sally Rooney. Set between 2011-2015, the storyline follows the lives of Irish teenagers Connell and Marianne, who both attend the same high school in Sligo, Ireland together and later at Trinity College in Dublin.

The two share a complex relationship together, as friends and lovers.

I really really don't want to give any spoilers, so all I will say is it's not like all those other rom-coms.

Most let you in - but only up until a point. Usually there are no complex narratives, nor characters that relate to our normal, and frankly exhausting lives. We go to rom-coms (sometimes) to find what we are missing - something that is manufactured and a wholly unrealistic fantasy.

But what you'll see when watching Normal People, is that Marianne is damaged, just like Connell.

It's an unfair love story, it's a heart-breaking love story, and it is a reminder to all of us how unflinchingly honest and absorbing first-time love really is. While they discuss all topics, including sex, heartbreak and abuse, in searingly delicate ways - the feeling it will imprint on you once you've finished all 11 episodes, can only be described as broken.

Of course, I will never watch Normal People again. Because it tore my heart into many, many pieces. But it's been 11 months since I finished the whole season, and in all honesty - I still think about it often.

If you haven't seen it, please do. Just make sure you have something to wipe up all your tears at the ready.

You can catch the whole season of Normal People on Stan. 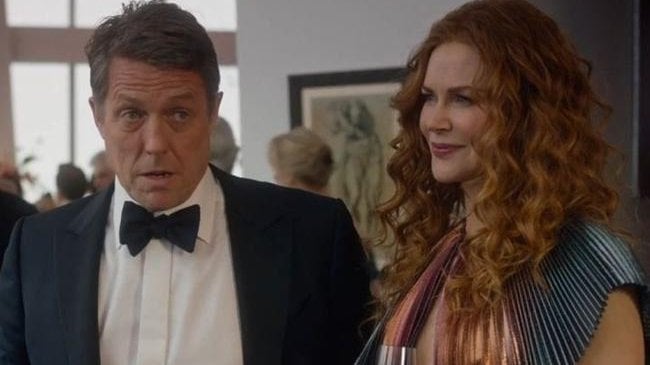 Perhaps my favourite watch of the year. Image: Binge.

Perhaps my favourite watch of the year, The Undoing's only downfall is there isn't a season two.

It's a thriller-drama set around the lives of married couple, Grace (played by Nicole Kidman) and Jonathan Fraser (played by Hugh Grant). They're not only uber-rich, but they're genuinely happily in love too (ignorance is bliss, I suppose).

However, what unravels throughout The Undoing will show that not all is what it seems in the perfect world of Grace and Jonathan, whose marriage comes undone overnight when the news of a brutal homicide ruins their community.

What I truly love about The Undoing is that it is unafraid to show the distinct differences between the murdered and alleged murderer. The Frasers and their friends are wealthy, white and ultimately untroubled. The murdered woman, whose name we will come to know as Elena Alves, lives a life in stark contrast to Grace's world.

What The Undoing ultimately does is show that the truth is deep beneath the surface. I loved it, and watched with my mouth agape as each clue was discovered.

It's a must watch for thriller-lovers who want to second guess themselves each episode.

You can watch it all for yourself on Binge.

RuPaul's Drag Race Down Under. 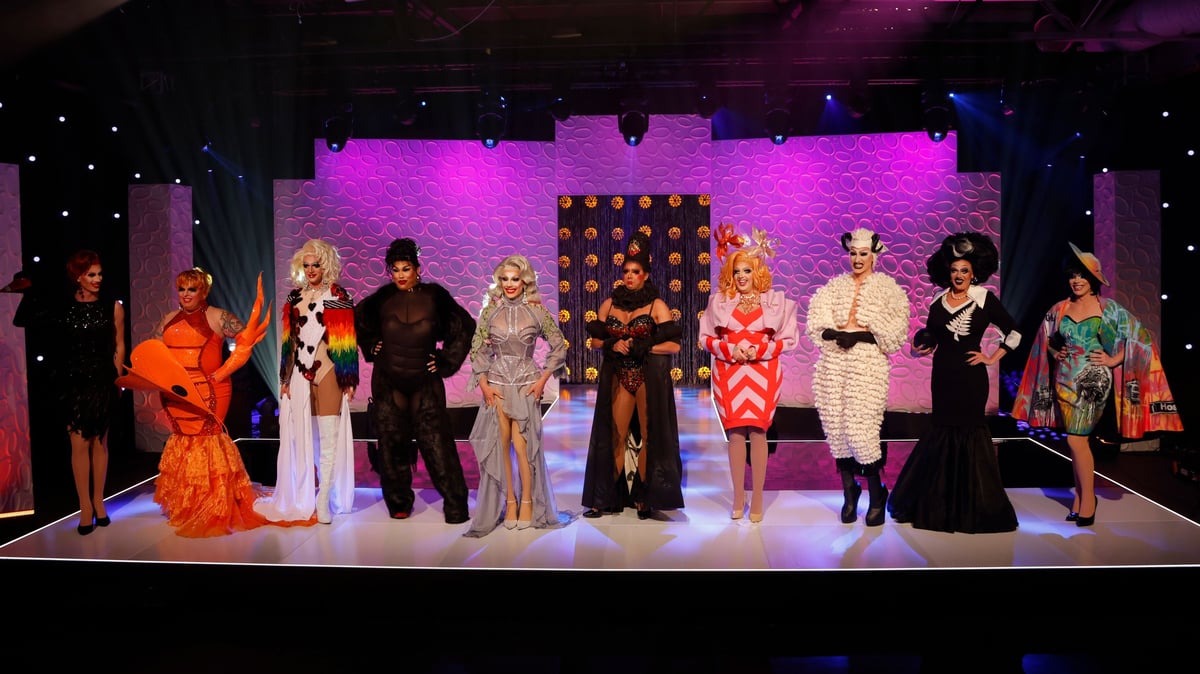 My eyes were glued to the screen the entire time. Image: Stan. Last, but not in any way the least, is the show that united all my friends and I during lockdown. RuPaul's Drag Race. There are many spin-offs of the original drag competition set in the United States, but the one filmed on New Zealand soil especially piqued my interest.

Queer community and drag queens in Australia and New Zealand were more than ecstatic when the show finally landed in our own backyard.

Stan's original RuPaul's Drag Race Down Under proved to be the ultimate watch. It featured some of my favourite queens - ones that I had watched and cheered on at my own local bars and gay clubs, including Coco Jumbo and Etcetera Etcetera.

Hopefully for season two, we will be able to get an even better look at some more homegrown talent.

I am counting down the days.

You can watch RuPaul's Drag Race Down Under on Stan.

Reply
Upvote
I liked The Undoing as well but there is no need for a season 2. What would it even focus on? The story is over.
M
mamamia-user-236023277 8 months ago