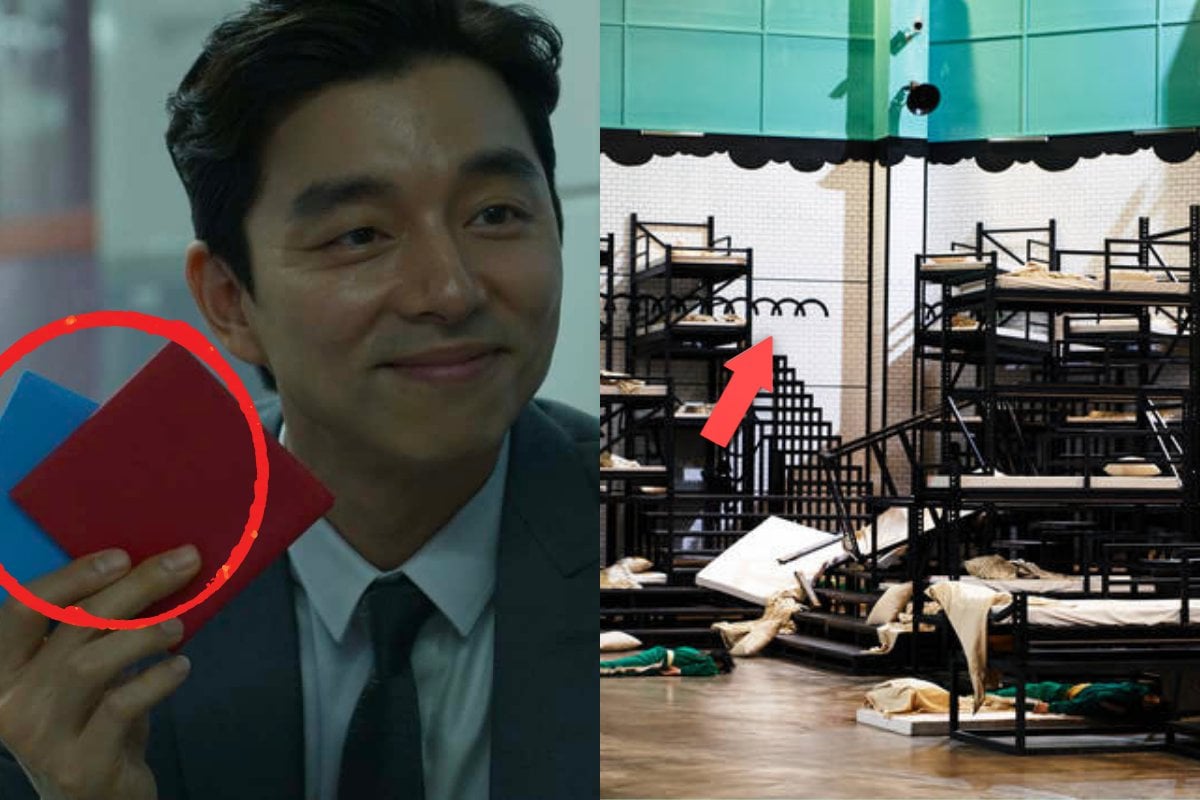 In case you missed it, we can't get enough of Squid Game.

The Korean drama dropped on Netflix just over a week ago and is currently on track to become the most popular Netflix series of all time.

Which means it's also been a gold mine for fan theories. And lots of them.

As if the series wasn't complicated enough, we've compiled our five favourite Squid Game theories from all over the internet to blow our minds that little bit more.

From the unexpected link between Il-Nam and Gi-Hun to why Gi-Hun dyed his hair red, here are the five best fan theories we could find.

Il-Nam might just be Gi-Hun's father. And there are a few sneaky clues throughout the series that back this theory up.

Namely, at the beginning of the series, Il-Nam tells Gi-Hun: "I'm willing to bet you got spanked a lot [growing up]."

When Gi-Hun asked how he knew, Il-Nam responded: "My son did too. He was just like you, friend."

While that might just be a coincidence, Il-Nam and Gi-Hun later paired up in episode six of the series.

"You know, when I was a kid? I lived in a neighbourhood just like this," Il-Nam told Gi-Hun.

"So did I," Gi-hun replied. "And you know something? Our alleyway looked very similar."

In the same game, when Il-Nam appeared to be forgetting his train of thought due to dementia, he asked Gi-Hun: "Is it the 24th?" as his son's birthday is coming up.

And here's where it gets really interesting.

When Gi-Hun stole his mother's credit card early in the series, he entered his birthday as the pin number: "0426".

Assuming the month is April, Gi-Hun's birthday would be just two days after Il-Nam suggested.

Could this be a plot point in season two? Only time will tell.

The guards could've been contestants... and vice versa.

Whether debt-ridden people competed or acted as guards in the game might've come down to what colour they picked when approached to join.

TikTok user @lucy.what1 shared the theory last week asking: "What could have happened if Gi-Hun selected the red square instead of the blue?"

"[The man from the train station] asks [Gi-Hun] to choose a colour. He chooses blue and wakes up as a player. What if he had chosen red?" 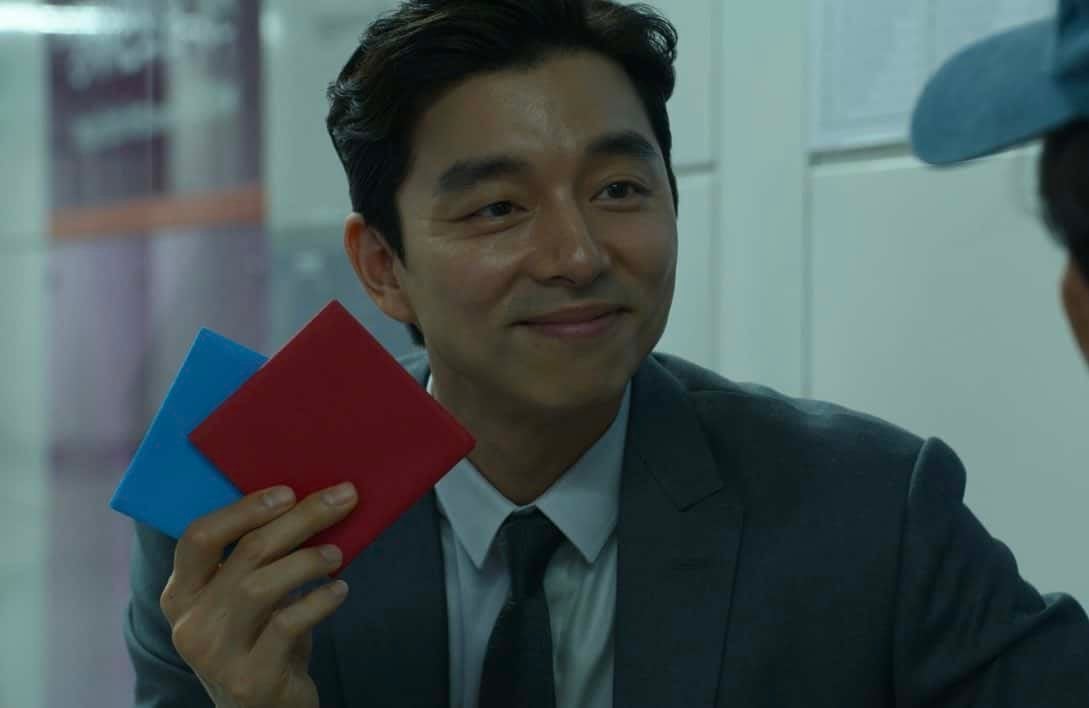 The TikTok creator took it one step further, looking back at all other player who entered the game. And you guessed it. They all picked blue.

If true, it would explain why the guards in the series seem like normal people, with some even so desperate for money that they harvested player's organs.

Perhaps they were working off their debt as guards instead? ¯\_(ツ)_/¯

The games were in plain sight all along.

This one's not so much a theory, but a secret that could've changed the game's outcome completely.

It turns out competitors could see what games they were up for next while in their accommodation, if only they took a moment to read the writings on the wall.

Hidden behind the bunk beds were drawings that illustrated each and every challenge: from honeycombs to the final squid game.

But it just didn't click for the players in time (or us either, tbh). 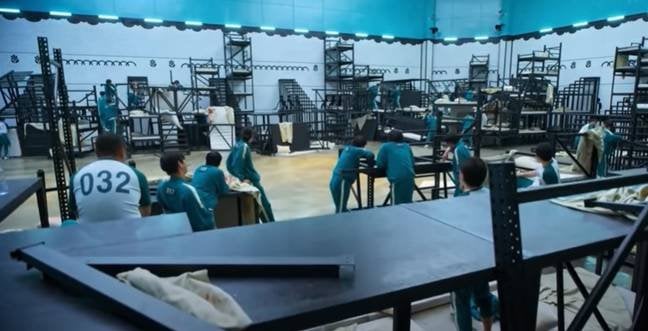 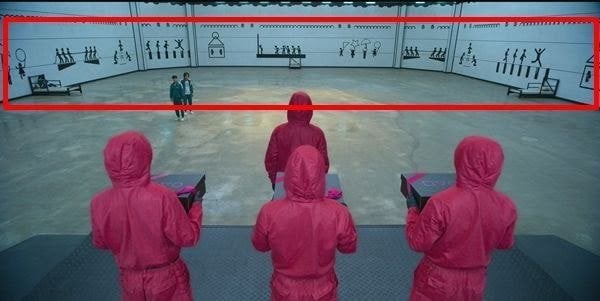 Gi-Hun dyed his hair red for a very particular reason.

In Korean culture, the colour red represents masculine energy and many fans believe this is a symbol that he has gained some control over his life.

But more obscure theories suggest that Gi-Hun dyed his hair red to match the colour of the guard's suits as he intends on returning to the game undercover.

There are other Squid Games around the world.

As was implied when the VIP guests arrived in South Korea, these games were not an isolated incident.

In fact, with high-profile guests travelling from all over the world, we can pretty well assume this is a global gambling operation, created by Il-Nam years ago.

We're really hoping this means there could be a few spin-off series set around the world...

Did we miss anything? Let us know your favourite Squid Game theory in the comments below.

Reply
Upvote
After I got past the very boring first half of the first episode, I mentioned to my son who had already watched the series, there was something odd about the old man. I didn't know what, just that there was more to meets the eye with him.  I was right.
Resources
Very Peri
Skin
News
General
Opinion
True Crime
Politics
Sport
Explainer
Entertainment
Celebrity
Reality TV
Movies
TV
Books
Rogue
Royal
Lifestyle
Beauty
Fashion
Weddings
Home
Wellness
Health
Fitness
Travel
Food
Family
Before The Bump
Pregnancy
Baby
Kids
Teens
School
Parent Opinion
Work & Money
Money
Finance
Career
Lady Startup