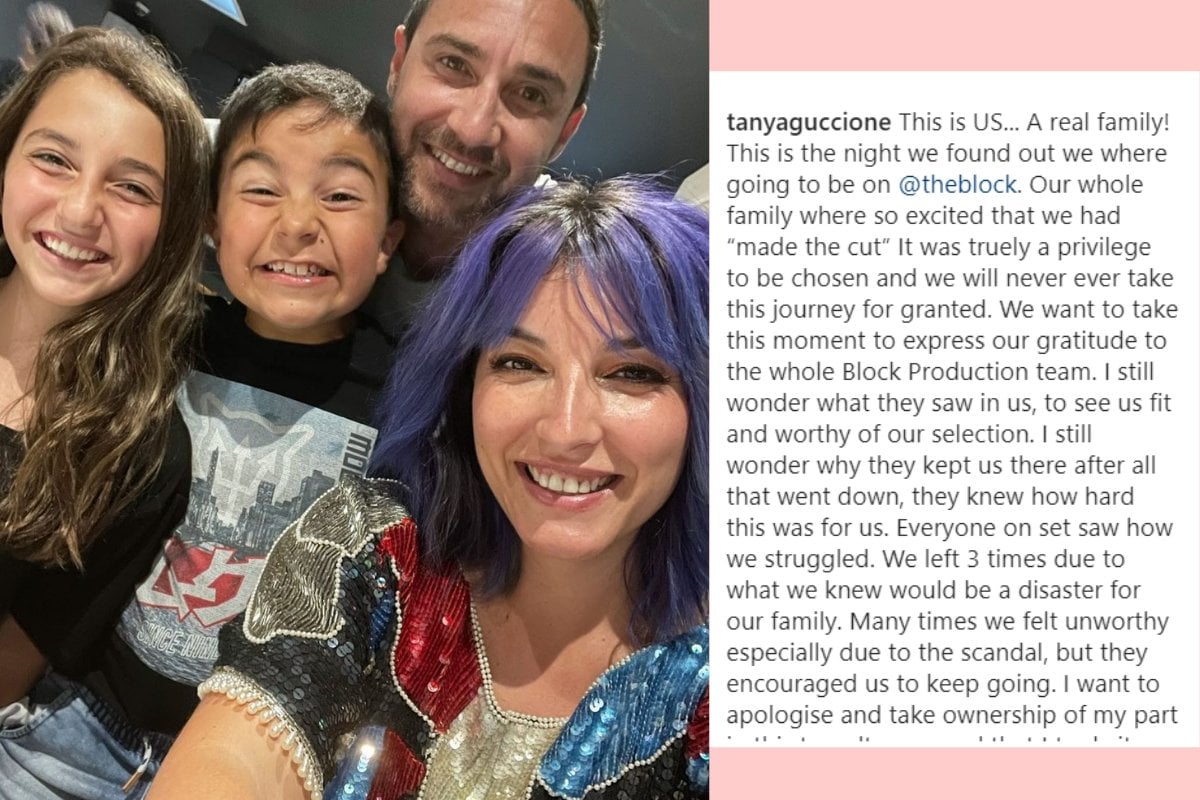 In case you may have missed the memo, The Block has finished its 17th season - and it's safe to say this season of the reality TV show had no shortage of drama.

The Block: Fans v Faves saw five teams renovating five family homes in a cul-de-sac in the Melbourne suburb of Hampton. The contestants battled it out to win a sweet $100,000 in prize money, on top of the profits their home made on auction day.

Watch the trailer for The Block. Post continues below.

This season saw some pretty big changes from the usual format. For the first time, contestants built basements in their homes. And to make things even more difficult, they weren't given any plans for their houses.

But that's not all, of course.

There was a big ol' cheating scandal that rocked The Block for pretty much the entirety of the season.

Here's everything that has happened since The Block wrapped up for another year.

Tanya speaks out for the first time.

Following Sunday night's finale, contestant Tanya has issued a long message to those who tuned into The Block.

During the final episode, Tanya finally came clean about the show's cheating scandal by admitting it was her who took a photograph of the show's production schedule, which gave her a significant advantage in the competition.

Posting to Instagram on Wednesday, Tanya shared that she and Vito left The Block three times throughout filming.

"This is US. A real family! This is the night we found out we were going to be on The Block," she wrote.

"Our whole family were so excited that we had 'made the cut'. It was truly a privilege to be chosen and we will never ever take this journey for granted," she continued.

"I still wonder why [the production team] kept us there after all that went down, they knew how hard this was for us. Everyone on set saw how we struggled."

A post shared by MakeupArtist & her Gucci gang (@tanyaguccione)

She also issued an apology to all those who watched The Block.

"We left three times due to what we knew would be a disaster for our family. Many times we felt unworthy especially due to the scandal, but they encouraged us to keep going.

"I have regrets and so much that I could say about this season but all I really want to say is sorry. We let so many people down. The humiliation on national television is, I can assure you, the biggest punishment of all!"

After Mitch and Mark's whopping win on Sunday night, the pair spoke out in support of Tanya and Vito over the cheating scandal.

Earlier in the season, the two teams had a major confrontation with Mitch and Mark labelling the pair "liars". Throughout the season, we didn't see the contestants work well together until the final episode, when Mitch reached out to comfort an emotional Tanya.

"I don‘t think anybody is as embarrassed or as disappointed as me," she said after being caught out. "I am not a stupid woman but I did a stupid thing."

In a statement on Monday, the couple urged the public to forgive Tanya.

"Tanya, the purple-headed girl and the face of the big lie of The Block," they wrote.

"She made a mistake. Have you ever made a mistake and tried to cover it up, it gained momentum and before you knew, there was no way out, you’d dug such a big hole you couldn’t see any way out – imagine doing this on the biggest show on Australian television. This is what happened to Tanya, we know her, she’s good, but she stuffed up, we have too made mistakes, you all saw me [Mitch] with my inside head thoughts that I blurted out.

"If you’ve ever made errors in judgment in your life that has embarrassed you, please consider what Tanya has gone through and is dealing with before you judge her, she deserves a chance – we know this is difficult and we’ve had time to talk with Tanya and support her to move forward, please join us and give Tanya a chance, we all deserve it."

Back in September, Tanya shared that she and her husband Vito had received intense "death threats" during their time on the show.

"[I've received messages like], 'If I find you on the street, you better watch your back.' People have called Vito’s business and called my agent because I‘m a makeup artist and left them abusive, abusive comments and emails," she said.

"You know what, people are angry at the moment. They’re really upset, it’s an audience that are not happy in their lives and are in lockdown... And they take it out on me."

Exactly what happened during The Block finale.

Ronnie and Georgia ended up winning the most points throughout the season, so they were able to pick the auction order for the finale.

While they had plans to go second, behind Kirsty and Jesse, they ended up changing their placement after their agent urged them it would be the best decision.

The final auction order was Ronnie and Georgia, Mitch and Mark, Josh and Luke, Tanya and Vito, and Kirsty and Jesse.

Read more: A cheating scandal confession and a bidding war: Exactly what happened during The Block finale.

While Ronnie and Georgia were expected to take the win for the duration of the season, it was an emotional burn for the couple as they watched the other contestants earn hundreds of thousands more than them in profit.

Posting to Instagram after the finale aired, the pair made a subtle reference to the cheating scandal, writing: "Our The Block journey might not have ended the way we planned, but it’s still such a fabulous financial outcome for our family. We hold our heads high knowing we left nothing in the tank, did the best we could whilst playing an honest and fair game."

Reply
Upvote
Despite the question mark about this being a "production" stunt...this is essentially a game show with up to millions of $ to be won. If there is cheating, it is essentially fraud and gaining financial advantage by deception. Image if it came out that a contender on "sale of the century", millionaire hot seat or the chase knew, in advance, what the topics or questions would be....?
F
flyingdale flier 3 months ago