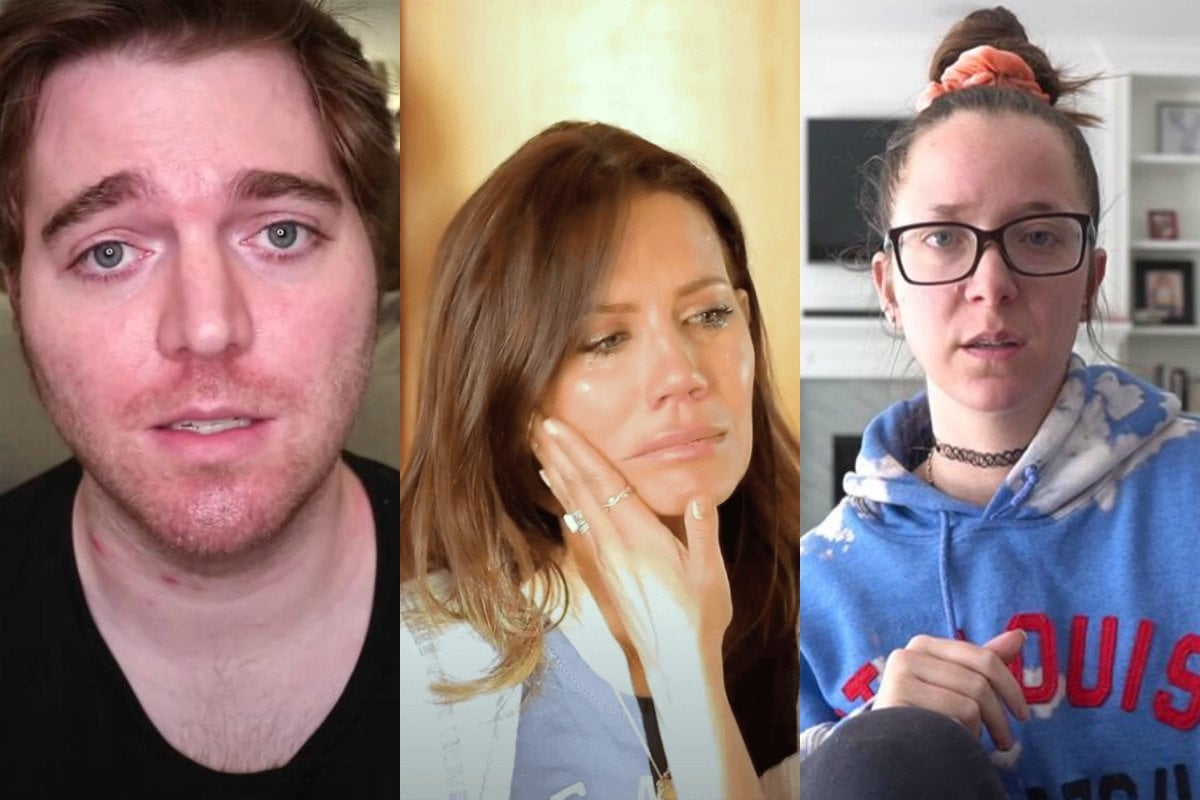 For those of us unfamiliar with the world of YouTubers, the video platform and its celebrity culture is a strange, intimidating land.

Basically, all we know is there is a lot of drama and sometimes that drama (remember James Charles and Tati Westbrook?) goes beyond the YouTube bubble and enters the consciousness of well, everyone else.

Fans and social media users have dug deep to the depths of old YouTube, podcast and Twitter content to find offensive, racist and disturbing incidents that are now popping up all over the internet.

In the last couple of weeks many different YouTubers, including some of the platform's biggest names, have apologised for problematic content from their pasts, either on their own accord or after being prompted.

The names Jenna Marbles, Shane Dawson, Jeffree Star and Tati Westbrook in particular, have been all over social media recently. We've broken down each of the issues surrounding these names, plus a few more.

You might recognise this name from the time she created what was one of 2019's best feuds, and Tati Westbrook is back baby, to take part in one of 2020s too.

On Wednesday AEST, Westbrook uploaded a video to YouTube titled 'Breaking My Silence', a 40-minute tell-all throwing her ex-mates Jeffree Star and Shane Dawson well and truly under the bus.

Last week, Dawson denied that she was behind her 2019 drama with James Charles. But in her video, Westbrook said it was in fact Star and Dawson that orchestrated the whole thing, because they were "bitterly jealous" of Charles' success.

"Back in 2019, Jeffree started talking a lot more crap about James Charles than usual. It seemed that doing so had become his biggest obsession," she told viewers.

"Over the course of the next few weeks [Dawson] and Jeffree fed me so much new information that I felt sick. Almost every day there was more information and new allegations. Eventually, I started believing what they were saying, because they said they had evidence.

"It wasn’t enough for me to contact the authorities, it was enough to scare me."

She said she made the video "as a result of all of the poisonous lies that were fed to me by Shane Dawson and Jeffree Star".

She apologised to Charles as well as others who had found themselves in feuds with Star, whose side she took.

After the video, Dawson posted and quickly deleted "“THIS IS A F*CKING LIE AND I’M LOSING MY MIND!!!!!!!!!!" on Twitter. Star is yet to respond.

Jenna Marbles, real name Jenna Mourey, announced she was quitting the platform in a video to her 20 million subscribers on June 25.

Marbles was one of YouTube's first and biggest stars, spending the last decade of her life being a YouTuber.

In her final video, the 33-year-old apologised for her past controversial videos, including one featuring what viewers perceived as blackface impersonating Nicki Minaj (though Marbles said she was not wearing any makeup or extra fake tan in the video). Other videos included a rap that disrespectfully imitated Mandarin, and sl*t-shaming. According to Forbes, the hurtful content has been private, and therefore not visible on her channel, for many years.

"I think I'm just going to move on from this channel, for now," she said in her apology video. "I don’t know if that's forever. I don't know how long that's going to be... I want to make sure that the things that I've put into the world aren't hurting anyone.

"I'm ashamed of things I’ve said and done in my past."

Marbles said she has made her own content private because she no longer thought it was appropriate.

"I think there was a time when having all of my old content exist on the Internet showed how much I have grown up as a person, which I'm very proud of," she explained, however, "I think now it's hard for that content to exist at all."

Marbles' exit from YouTube - what people are seeing as 'self-cancellation' - has received a mixed reaction, but fans and content creators have argued Marbles had clearly grown her beliefs and ethics since her early videos and took accountability, unlike many others in her industry.

I think it's vitally important that we tell creators when they are doing harm. And I have watched some creators react to that by listening and changing, while others have cried a bit in an apology video and then gone right back to making shitty stuff that hurts people.

"I really strongly believe that we should be judged not by how we acted when we were ignorant, but how we responded when we were informed. By that measure, Jenna Marbles is head and shoulders beyond a great many YouTubers," Hank Green, creator of VidCon, tweeted.

YouTuber Sky Williams said "we need to celebrate reform and change instead of condemning the past... She's showed her growth in her work and life".

this @Jenna_Marbles shit is breaking me up.

we need to CELEBRATE REFORM AND CHANGE instead of condemning the past.

She has proven she’s grown. She’s been in ZERO drama. Donates time and money to animal shelters - she’s showed her growth in her work and life.

Many have pointed out that other YouTubers have a much more extensive history of harmful content, including blackface, racist sketches, and jokes, and have not been 'cancelled'.

Over the weekend, YouTuber Shane Dawson was "inspired" by Marbles to make a video apologising for his own past of harmful content.

"Blackface was something that I did a lot... on my channel. And there's no excuse for it. There's literally no excuse. I made a video six years ago talking about it and I gave excuses and it was wrong," Dawson said.

"I didn't actually look into the history of it and why it's so wrong and why people were so upset," he said, telling his 23 million subscribers he was no longer ignorant.

"I am so sorry to anybody that saw that and also saw that people were lifting me up and saying, 'You're so funny, Shane.' I can't even imagine what it would be like to be black and see this white f*cking guy doing blackface and the whole Internet at that time being like, 'LOL'."

He also apologised for using the n-word while in blackface and for past jokes he made about paedophilia throughout his 15 years on the platform.

Near the end of the 20-minute video, Dawson said he was willing to "lose everything" in order to be held accountable.

Dawson's video garnered lots of controversy on social media, with many users saying he made it seem like he only apologised because of Marbles' earlier video.

"Oh, whip your hair back and forth," he said in the clip, referencing Willow's 2010 single 'Whip My Hair'.

SHANE DAWSON I AM DISGUSTED BY YOU. YOU SEXUALIZING AN 11 YEAR OLD GIRL WHO HAPPENS TO BE MY SISTER!!!!!! IS THE FURTHEST THING FROM FUNNY AND NOT OKAY IN THE SLIGHTEST BIT.

This Man Was Also Doing Black Face On The Regular🤦🏾‍♂️🤦🏾‍♂️🤦🏾‍♂️. As The Youth We Need To Support Creators Who Support Us And Our Morals. This Is Not Okay.

To Shane Dawson ... I’m done with the excuses.

Dawson said he made the terrible jokes instead of dealing with personal traumas.

Some reacted to Dawson's apology to applaud him taking accountability and for having grown, but the majority of responses insisted his behaviour as an adult was inexcusable.

Many pointed out it also came at a convenient time, just after Marbles' apology and after a thread of his actions went viral on Twitter. He is also still friends with other YouTubers people deem problematic, including Jeffree Star, prompting them to believe his apology is insincere.

Beauty YouTuber Jeffree Star is a pretty common name to see involved in YouTube drama, and this is no exception.

Most recently, Star apologised after a photo resurfaced featuring him with Nazi imagery. The screenshot taken from a video 'exposing' Star showed him next to reversed swastikas and Nazi symbols, and the URL "lipsticknazi.com".

On his Instagram stories, Star confirmed it was a real image taken in 2004 before attempting to explain his use of the word Nazi and Nazi symbolism.

"I created a URL called LipstickNazi.com," he said in now-expired Instagram stories, as reported by Cosmopolitan.

"Now, back then in the early 2000s, it was a slang term, like on the show Seinfeld someone was a 'soup Nazi' if you were a crazy cook. I used to work at the MAC counter, if you were someone that used to follow customers around in the store, you were called a 'door Nazi'.

"The term is wrong, it's derogatory, it's vile, it's disgusting and I should have never used it. No excuses ever, but I want to let you [know] the context of that and it was a slang term that I used. That 'lipstick Nazi' was for people who were like obsessed with makeup.

"Horrible decision. It was very wrong of me and for anyone who has seen that I'm deeply sorry. I'm disgusted with myself and I never should have used that word, ever."

He said the URL was never going to be used to sell products.

"There are no products, literally nothing but a dumb splash page, which I will forever be sorry for creating. Now, when I launched that single page, that same week it really did not sit well with me even back then. I dissolved all the site, I never launched it and it was literally nothing."

Meanwhile, Star's former friends have been sharing videos online highlighting his other alleged behaviour, and accusing him of orchestrating the 2019 drama between James Charles and Tati Westbrook along with Dawson. In her newest video, Westbrook herself has claimed this.

Tab, a friend of Star's for 13 years, posted a YouTube video claiming Star made a number of racist, derogatory and offensive comments during a trip to Vegas in February this year.

In 2017, Star uploaded a video apologising for old, racist videos of his. In 2016, another well-known YouTuber and influencer Kat Von D broke off her friendship with Star, condemning him for inappropriate behaviour including racism and bullying.

A number of other YouTubers have been caught up in the added scrutiny following Marbles, Dawson and Star's recent actions.

Old tweets from YouTuber Tana Mongeau, known for 'marrying' Jake Paul, have resurfaced in which she uses racist language.

YouTube fans have also expressed frustration that Marbles' 'cancellation' was accepted widely, while other YouTubers with a history of problematic videos continue to make money off the platform and be defended.

There are calls for YouTube fans to unsubscribe, block and boycott videos and products from others deemed bad.

armys on their way to cancel youtube 💃💃💃 #youtubeisoverparty pic.twitter.com/xY03y2UAdn

Marbles has not responded to the reaction following her video. Dawson has also not recognised the reaction to his, including the anger from the Smith family.

This article was originally published on June 29, 2020 and has been updated.

Reply
Upvote
1 upvotes
In the world of the creative arts, I doubt these people will be missed, considering they seem to create nothing of merit. Cancel away.
snorks 4 months ago

Reply
Upvote
2 upvotes
@laura__palmer They have 90,000,000 YouTube followers between them, you'd have to think some people will miss them.
laura__palmer 4 months ago

Reply
Upvote
1 upvotes
@snorks The content of these things are so vapid, that they really won't be. It will be pretty easy to move on, trust me.
snorks 4 months ago

Reply
Upvote
@laura__palmer I'm not suggesting that in 100 years there will be university degrees studying their impact on society, just that a sizable amount of people watch them.
laura__palmer 4 months ago