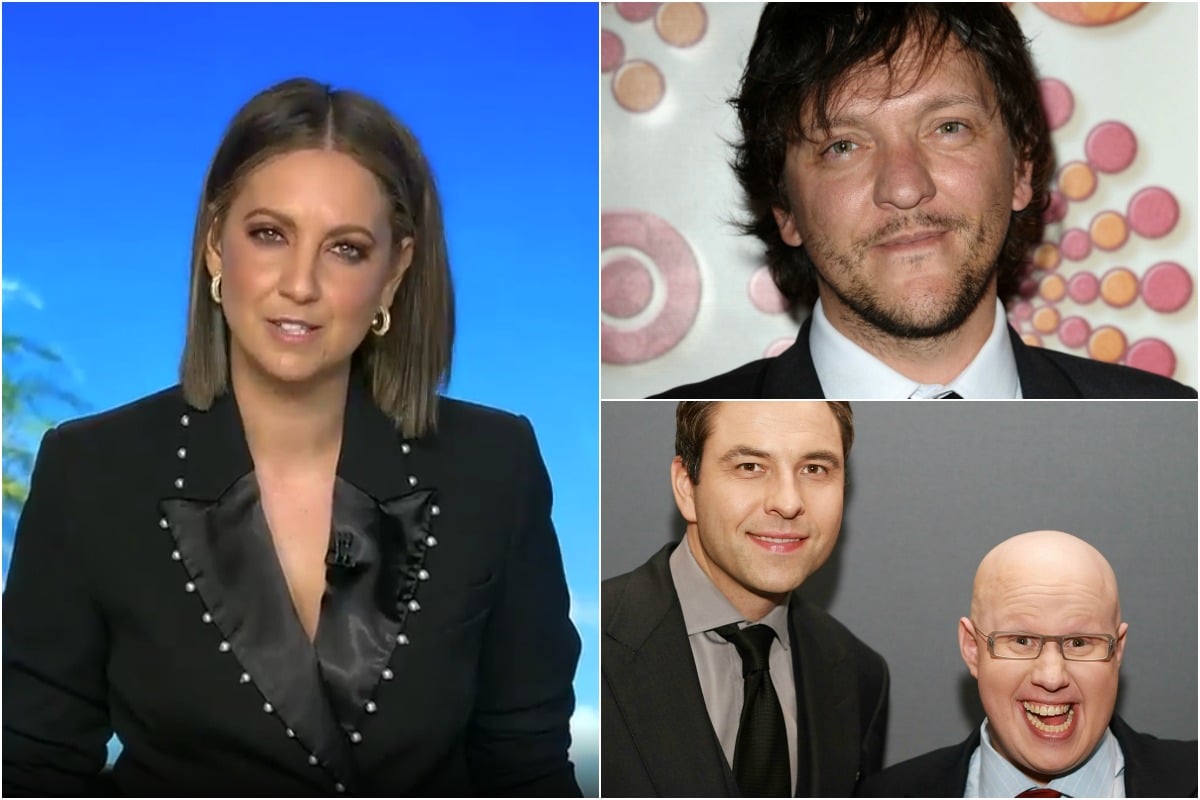 Streaming services around the world have started pulling movies and comedy off their platforms that are potentially offensive, or portray racism, in the wake of worldwide Black Lives Matter protests.

Little Britain has been removed from a number of services including BBC iPlayer, and Chris Lilley's controversial comedies and The Mighty Boosh have been taken off Netflix.

But as Today entertainment reporter Brooke Boney explained on Thursday morning, deleting history that dates back centuries is not the answer to our future.

WATCH: Brooke calls out the removal of comedies by streaming services on the Today Show. Post continues after video.

The BBC released a statement overnight explaining they'd removed David Walliams and Matt Lucas' comedy Little Britain from their service because "times have changed" since the show first aired.

Little Britain, which first aired in 2003, has been criticised for its portrayal of black women by white men, with Walliams sporting black makeup and a large afro wig to play the overweight black woman Desiree DeVere. 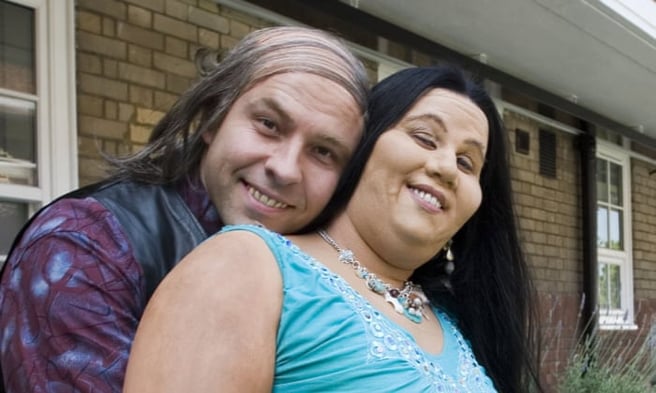 Matt Lucas and David Walliams in Little Britain. At Mamamia we are choosing not to show the blackface characters in our articles.

Lucas also used blackface to play Pastor Jesse King, who said he was "from the ghetto" and spoke in tongues to cure the sick. He also wore dark makeup to play Jamaican woman Precious, and ground crew employee Taaj, who was of Pakistani descent.

Lucas has since said he has regrets about Little Britain, describing the comedy as "cruel".

"Now I think it's lazy for white people to get a laugh just by playing black characters. My aim is to entertain, I don't have any other agenda," he told The Big Issue.

Closer to home, Chris Lilley's depiction of black and brown characters in We Can Be Heroes, Angry Boys, Jonah from Tonga and Summer Heights High have also faced years of criticism.

The four shows, which have now been removed from Netflix amid the Black Lives Matter movement, were originally broadcast on the ABC from 2005-2014.

In an interview with Fairfax Media, Lilley addressed the backlash Angry Boys received. "I think people who take things out of context might think that it crosses a line. Most people who see it get it and, once you're there in that world, it makes sense".

What Lilley fails to recognise however, is the years of oppression that make these characters offensive. 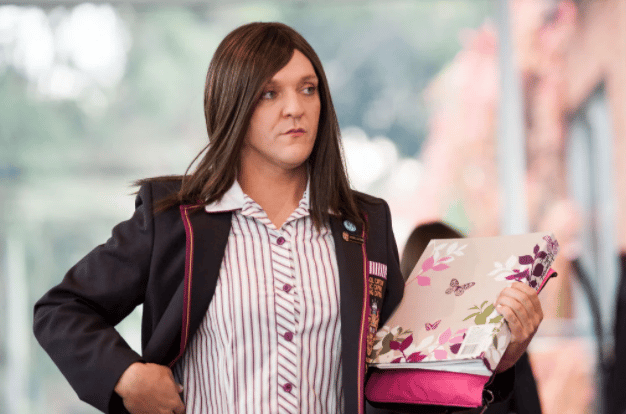 Ja’mie King was one of the characters played by Lilley in the now removed We Can Be Heroes. At Mamamia we are choosing not to show the blackface characters in our articles.

It's a stereotype steeped in centuries of racism - and was even written into Shakespeare's plays - but was particularly popular in the United States after the Civil War, as a way to mock and exaggerate people of African descent.

"Blackface is part of a history of dehumanisation, of denied citizenship, and of efforts to excuse and justify state violence. It is time to stop with the dismissive arguments those that describe these offensive acts as pranks, ignorance and youthful indiscretions. Blackface is never a neutral form of entertainment, but an incredibly loaded site for the production of damaging stereotypes...the same stereotypes that undergird individual and state violence, American racism, and centuries worth of injustice," race studies expert David Leonard explained in 2012 in the Huffington Post.

In modern day discussions of blackface, the racist history of the phenomenon is often swept under the rug with claims of ignorance.

But as Boney explained this morning on Today, we can't change history, and merely deleting these past discretions is doing nothing for the future of racial inequality.

"There is a problem with representation of people of colour on our screens... we know that. We also now know that blackface is inappropriate, there's no question about that either. But does going back into the archives and tearing down art that's been made in the past really help us move forward?" she said. 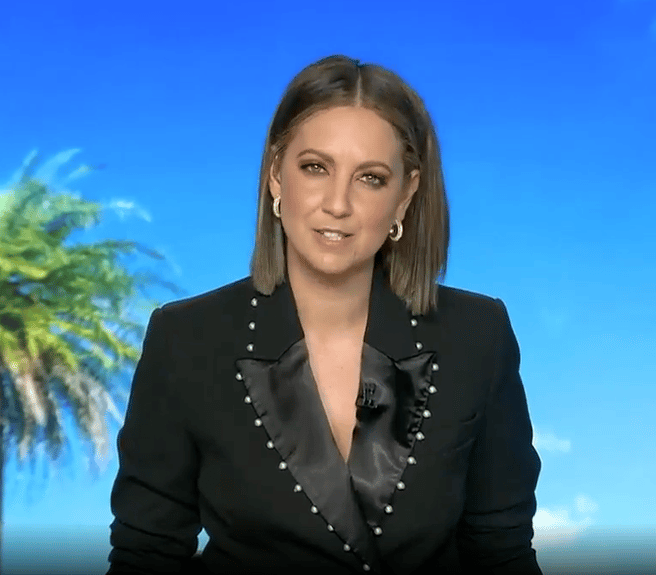 Brooke called out the removal of blackface comedy from streaming services this morning on the Today Show. Image: Nine.

"If I have children, I don't want them to see and to think that's how they fit into the world, but I'd also like to be able to show them how poorly our people were thought of and treated in the past. These things hurt because it feels like these people are punching down. It's easy for them to make fun of people who are on the bottom rung of the ladder in society.

"But if we're going to go back through history and remove things that are inappropriate by modern standards then we need to get rid of all of the movies by Harvey Weinstein, music by Michael Jackson, basically anyone who has done something wrong.

"If these companies truly want to create lasting change - and not just virtue signal in a moment of turmoil - then they need to support new talent and open doors that've been closed to people of colour before," she said.

"If they truly want to make a difference in the way we tell stories about who we are as a society, then we don't do that by deleting things we've done in the past. We do it by making sure that we don't do it again in the future and being more inclusive and responsible with our storytelling.

"If you're going to make change, make it meaningful," she concluded.

Reply
Upvote
'In modern day discussions of blackface, the racist history of the phenomenon is often swept under the rug with claims of ignorance.'  - Is it? While i'm sure there are people out there who aren't familiar with it, the vast majority of arguments I've seen about it concentrate on the fact there is no link between what people are generally doing as black face now, and what was happening in decades gone by.
News
General
Opinion
True Crime
Politics
Sport
Explainer
Entertainment
Celebrity
Reality TV
Movies
TV
Books
Rogue
Royal
Lifestyle
Beauty
Fashion
Weddings
Home
Wellness
Health
Fitness
Travel
Food
Parents
Before The Bump
Pregnancy
Baby
Kids
Teens
School
Parent Opinion
Work & Money
Money
Finance
Career
Lady Startup
Relationships
Sex
Dating
Separation
Friendship
Family
Real Life
Couples