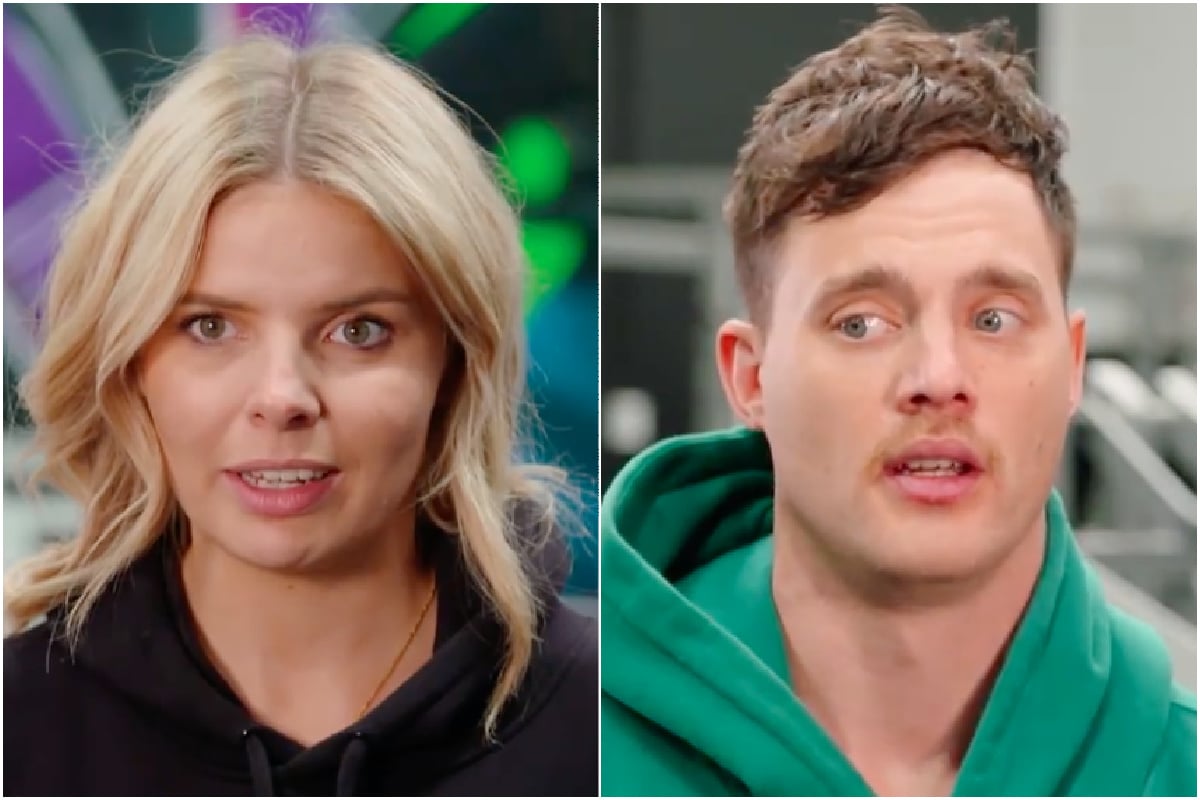 It's the morning after the Commitment Ceremony and holy John Aiken.

Remember when Carolina and Daniel casually walked in late as though it was fine and not the television bombshell of the decade.

And then John Aiken had to yell for ORDER and demand that the audio team attach their microphones before they started sharing the gossip.

And then Alessandra had to ask whether this usually happens on the show, and everyone was like... ummm kinda yeah but not like this, specifically.

And then all the other contestants stormed out in protest, and John had to shout that Carolina and Daniel couldn't re-join the experiment because of their 'unhealthy dynamic,' despite *gestures broadly at every other couple*.

But now we're here. At home stays week, with just four remaining couples, none of whom should be (legally) allowed to know where their spouse lives.

We also, however, have a Sam and an Al. They're not participating in home stays week, ever since Sam yelled on national television that she wanted to abandon her young son Al, and Al was shocked. For the third week in a row.

Given that there is a child involved, John Aiken has decided to introduce a new, entirely arbitrary rule, whereby Sam and Al have 24 hours to decide whether to stay in the experiment, i.e. whether mum abandons baby. 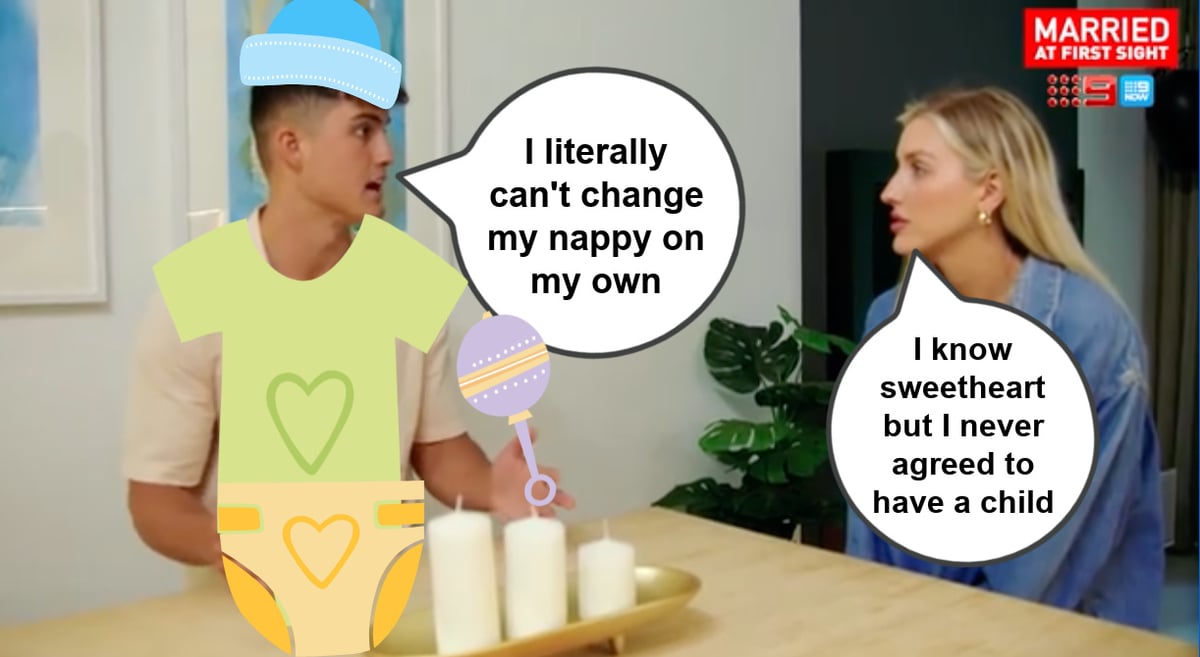 'Can you just wipe my bott bott? Pls?' But Al has an idea. Yeah, it's an activity, and dear god please don't let it be a ball pit. That's fun for you Al, but not for Sam.

It turns out Al doesn't know what the activity is yet and mate this is why. No offence but you're not remotely busy just plan something fun for this poor woman who has somehow ended up burping you and making sure you don't put forks in the toaster.

Meanwhile, Domenica and Jack have arrived on Domenica's family's farm. With her eyes, Domenica attempts to tell her parents that she's done some f**ked up sh*t on the television that she regrets but also... doesn't. 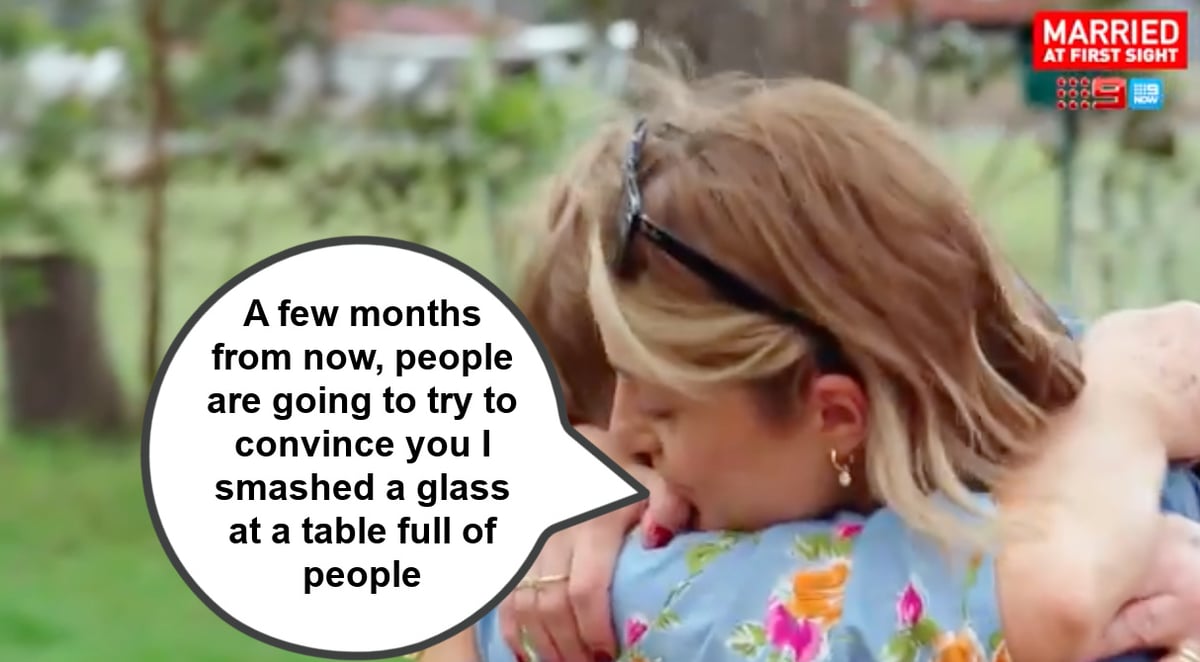 "Oh s**t," Nonna replies and home stays are brilliant television because no one understands how a television crew works do you understand.

In Liv and Jackson's apartment, Jackson is anxious that Liv might start a fight with, say, his mother. Or yell at his best friend. Or ask if there's cyanide available before she speaks to his housemate.

We get to Jackson's place and oh no Liv is telling the bridesmaid dress story sweetie we need to stop sharing that publicly. 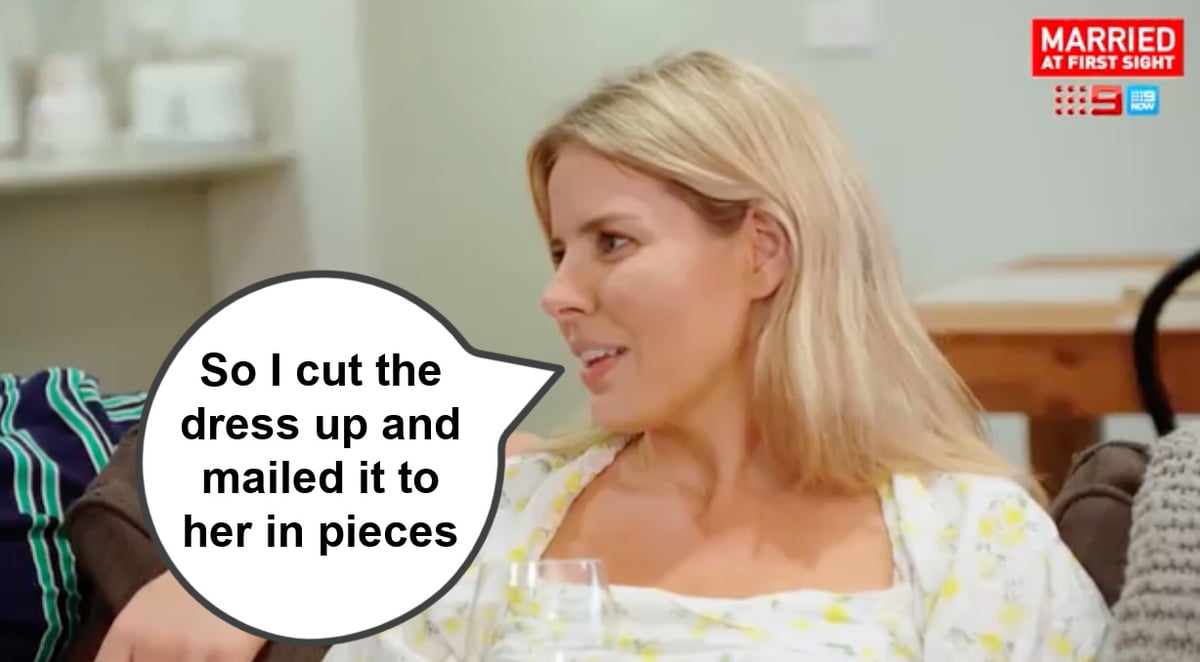 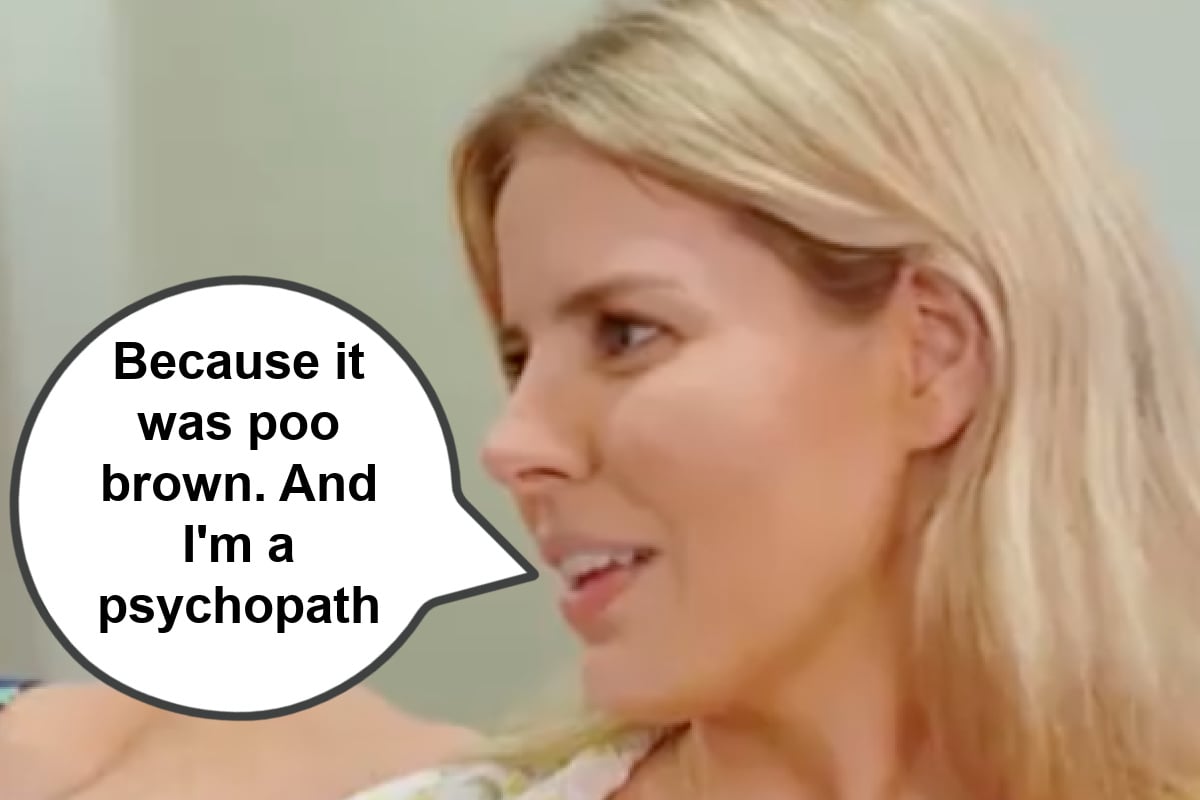 Classic. Over in Bondi, Tamara is visiting Brent's studio apartment. 'THIS IS THE SMALLEST LIFT EVER,' she yells and okay you're about to get a rude shock because people would pay good money to live in that lift.

In the apartment, she's horrified. "Where am I going to fit my things?" she asks and well. Isn't that the question renters in Sydney have been asking for years now.

It turns out Tamara lives in a four-bedroom house and a) why and b) how. She seems surprised that Brent, a man in his 30s, doesn't own a $12 million four-bedroom house in Bondi, where a literal garbage bin could be auctioned for more than John Aiken's salary. 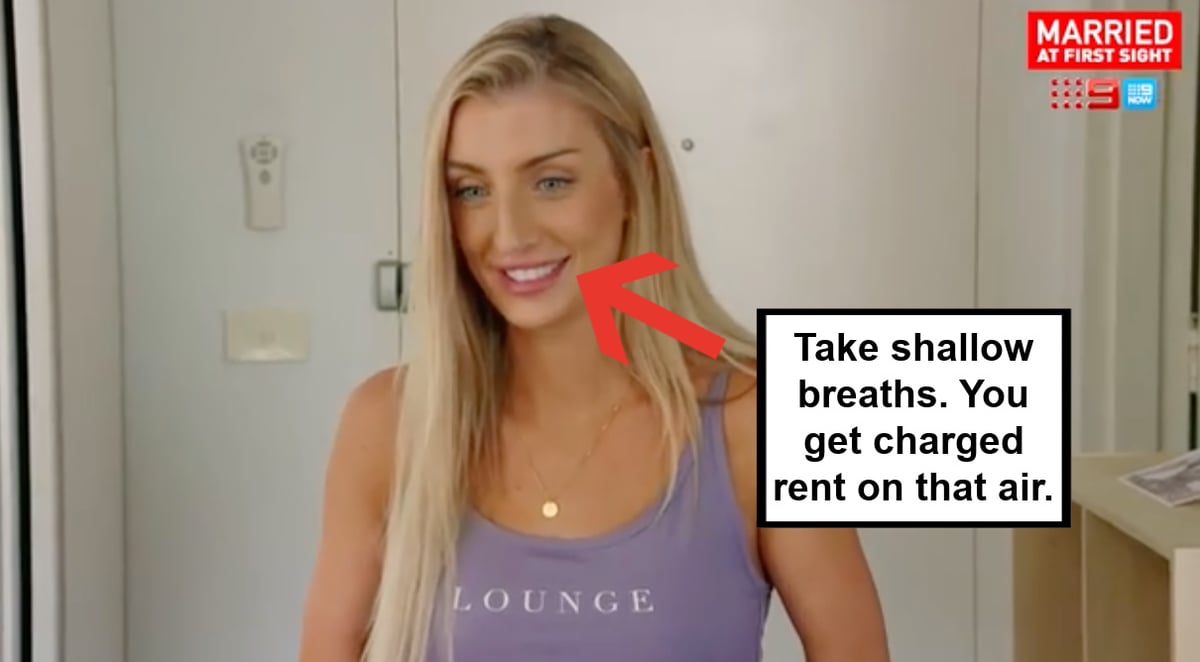 But it's not the size of Cody's place that's the problem. It's the fact that it's a literal crack den. 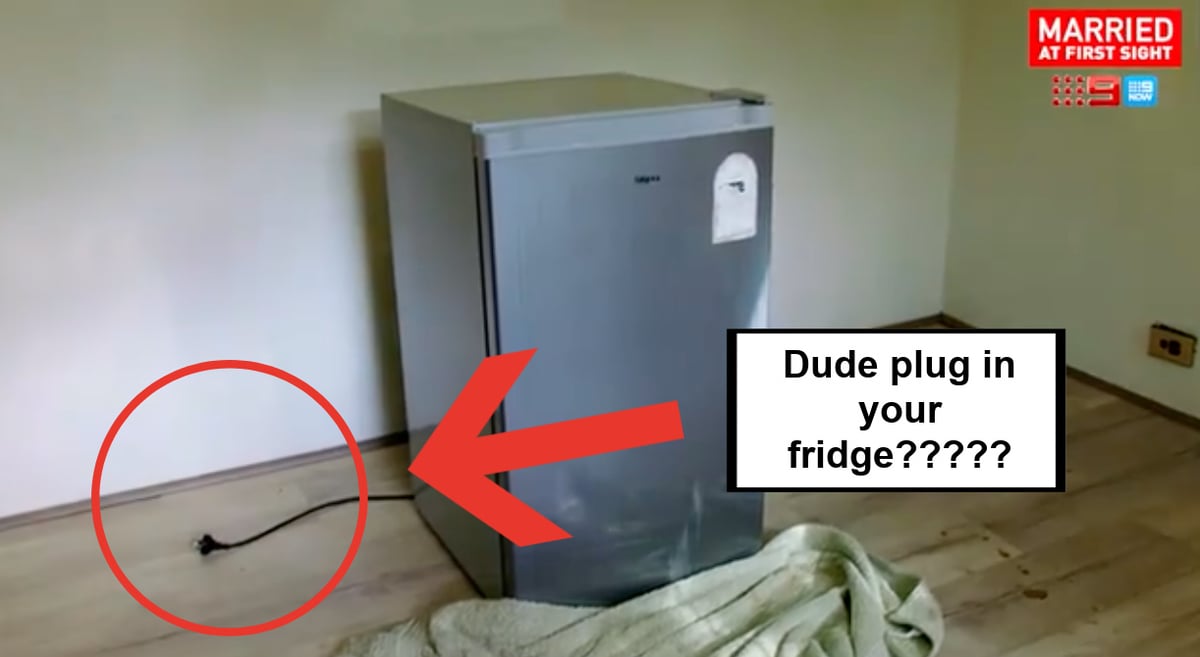 This is so anxiety provoking. 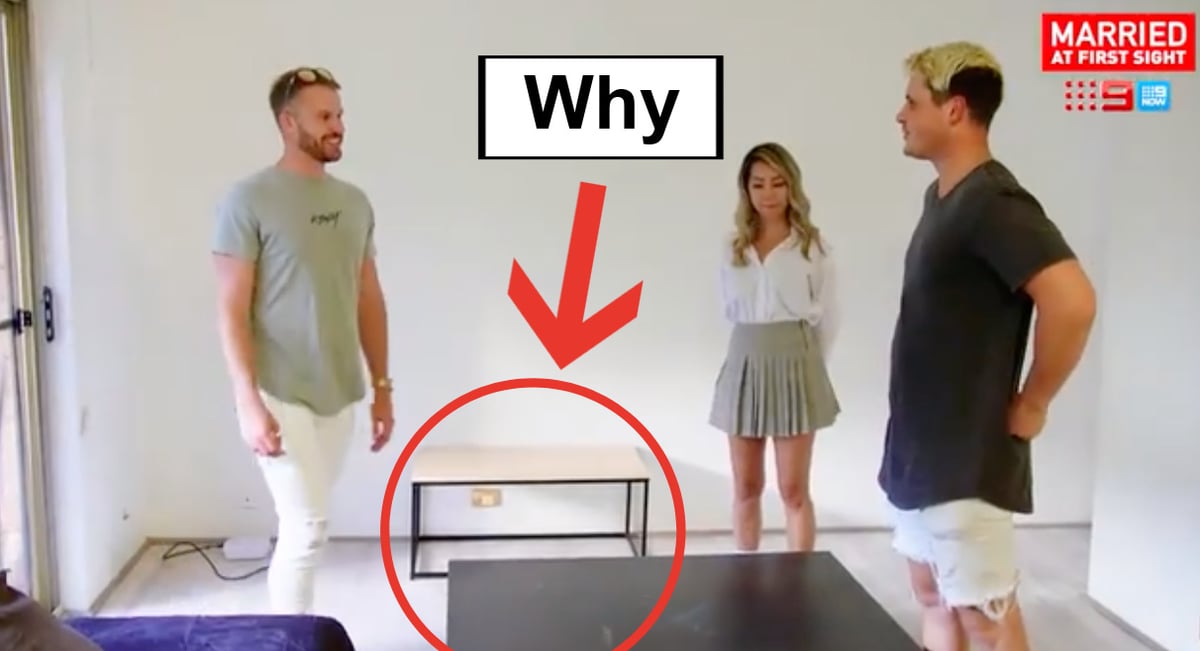 We hate it. Luckily, to add some warmth to the crack den, Cody's housemate has hung some new art on the wall. And by art we mean a poster of Selina and Cody with watermelons (??) photoshopped in, except Selina's watermelon looks like a vagina. 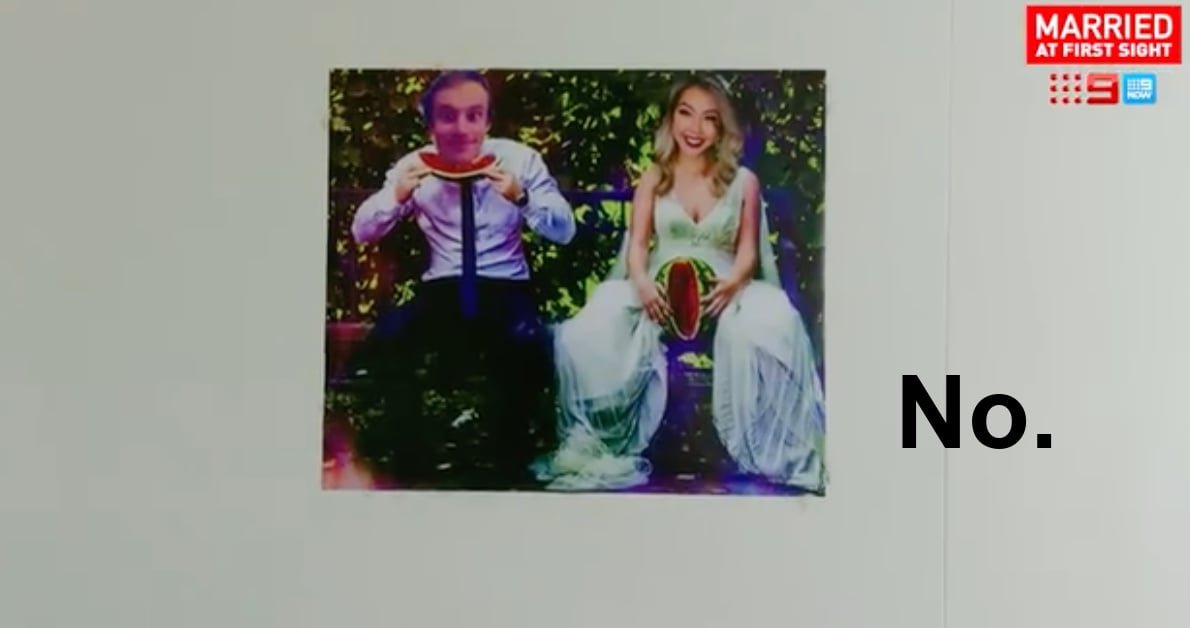 Take it down. Selina touches the poster and it's sticky, and that says everything about this apartment but also this relationship more broadly.

Over at Domenica's parents' farm, Jack's parents are coming to visit which seems... normal. No one even throws a shoe or yells and we're confused. The biggest drama is that Domenica's dog takes a s**t when Jack's parents arrive and it's like um? Have you guys forgotten when literal human s**t ended up on a toothbrush?

Brent and Tamara are waking up hungover from what appears to be a night of drinking several bottles of wine between the two of them, which seems healthy. But today they're going to Brent's parents' house, where... oh. It's Scooby. 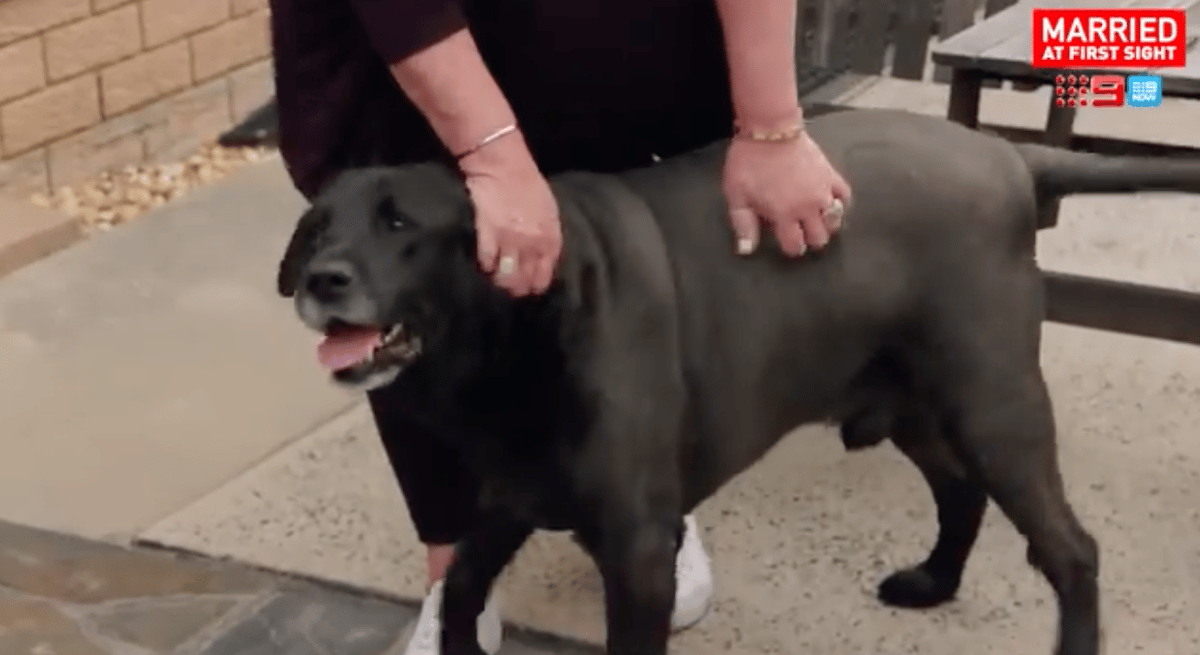 Hello there little man aren't you a beautiful boy. Brent refers to Scooby as a 'pup,' and we don't want to be rude but Scooby is a big 'ol woofer.

Tamara hates him because he doesn't own a four-bedroom house and it's like Tamara pls he's a household pet. 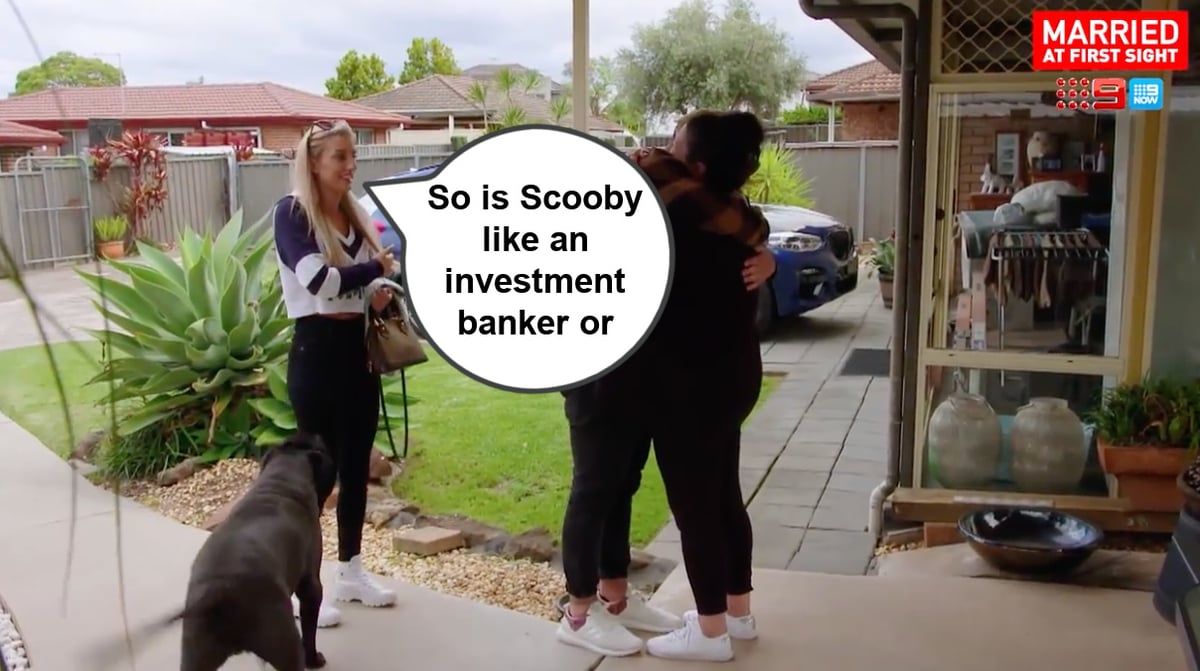 'Can he take care of a woman? Financially?' Suddenly, we're thrown back into a nightmare.

It's the loudest, rustiest, dustiest, more haunted contraption we've ever seen on television.

It's been blowing in Selina's face while she sleeps, giving her a number of infectious diseases, so she makes her way downstairs to find her fake husband.

But it's the kitchen tap. It also makes a devil sound. When Cody opens the cupboard underneath it, everything is falling apart and can someone get this man some safe and affordable housing.

When Selina asks about breakfast, Cody explains the options are leftover fast food or alcohol - and okay that's not entirely true because there's also this lovely pile of garbage she can choose from. 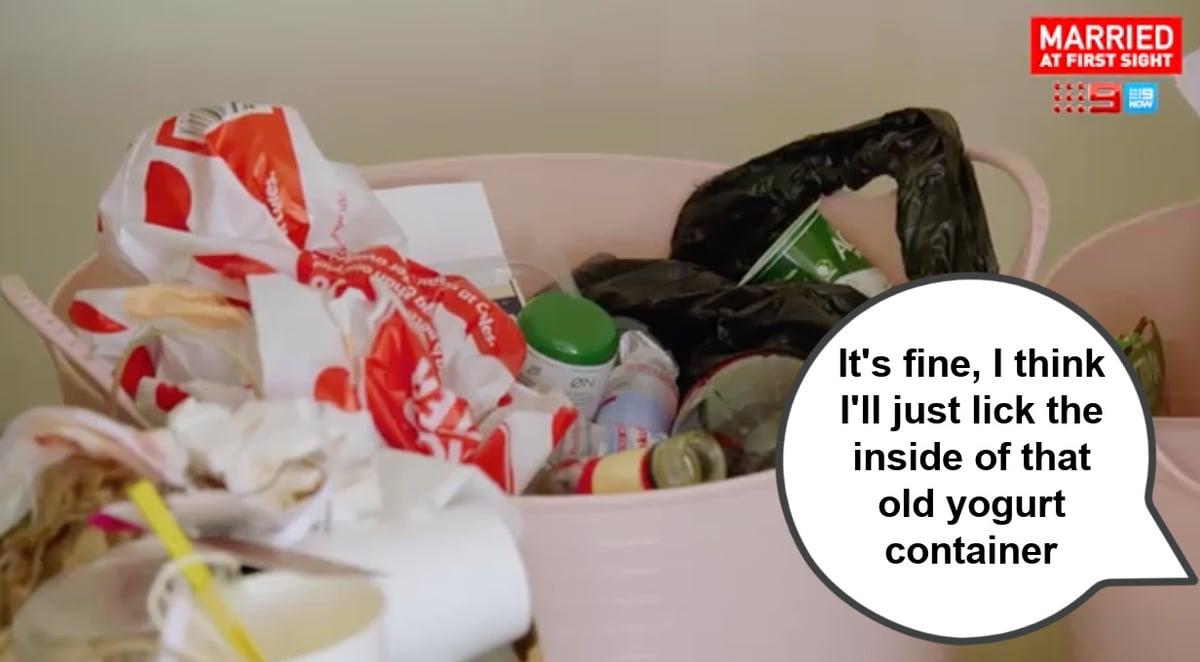 'It's like going to a cafe except I'm eating literal garbage.' Over at Jackson's house, Liv has regrets about the time she told her new partner's friends about how she's a "petty b*tch".

Is it true? Yes. Should we try to hide it for at least six months? Also yes.

The couple are making breakfast together in silence, when Jackson comments on the amount of butter Liv is putting in their scrambled eggs.

"Looks like a heart attack in a pot," he says and no you shut up Sir. Liv may have destroyed a perfectly good bridesmaid's dress for no reason but that does not mean we question her butter choices.

Jackson announces that he wants Liv to come to the gym with him, which is just straight up not a group activity. That is an individual task. To do in your own time. 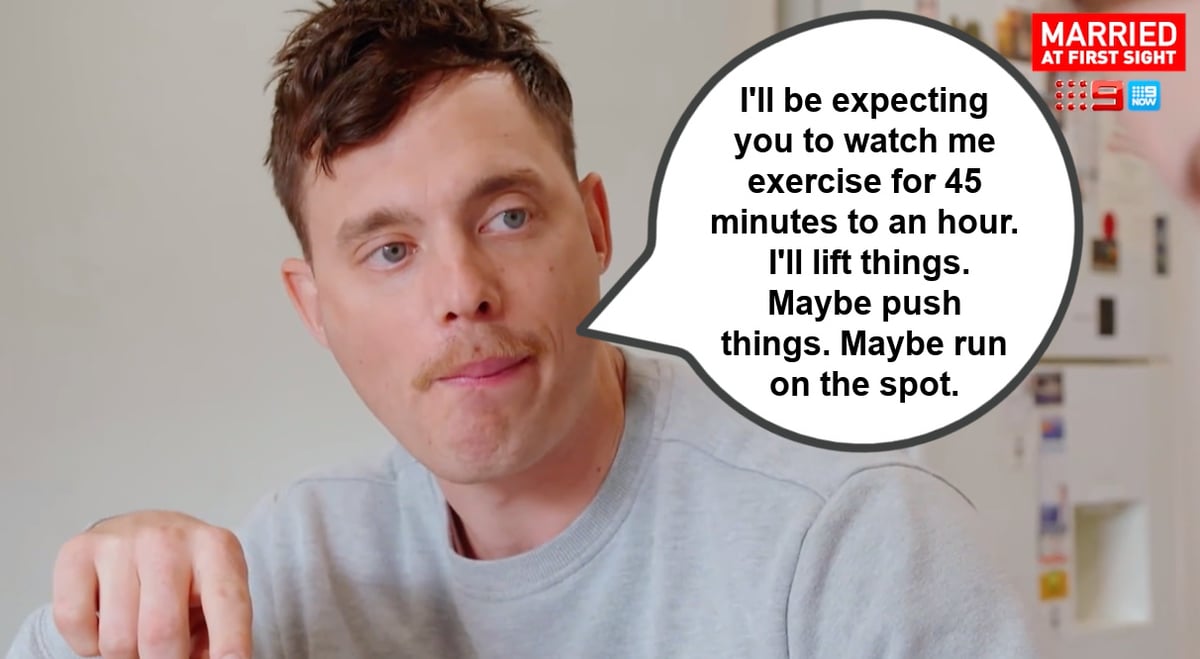 That sounds... really boring. Liv hates the gym, because - again - it's not a social setting where any two humans should try to interact. But Jackson is disappointed in her attitude. Towards the activity that solely involves him. 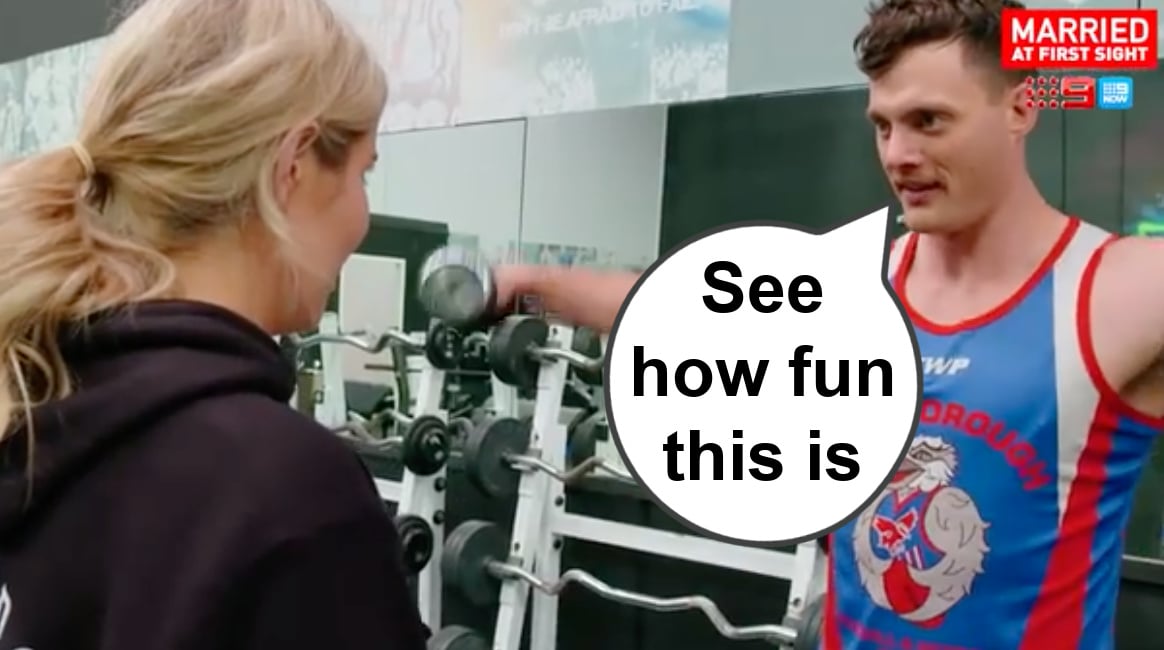 'I'm lifting a thing.' But also this? 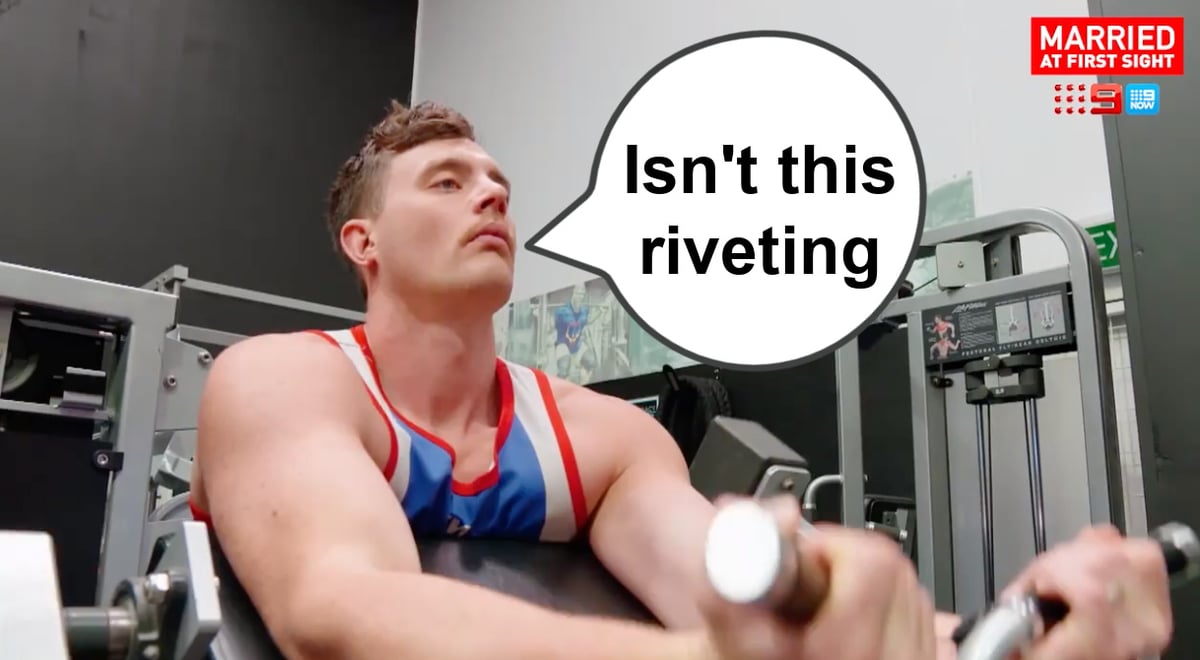 'I'm pulling a thing.' And on a related note, this: 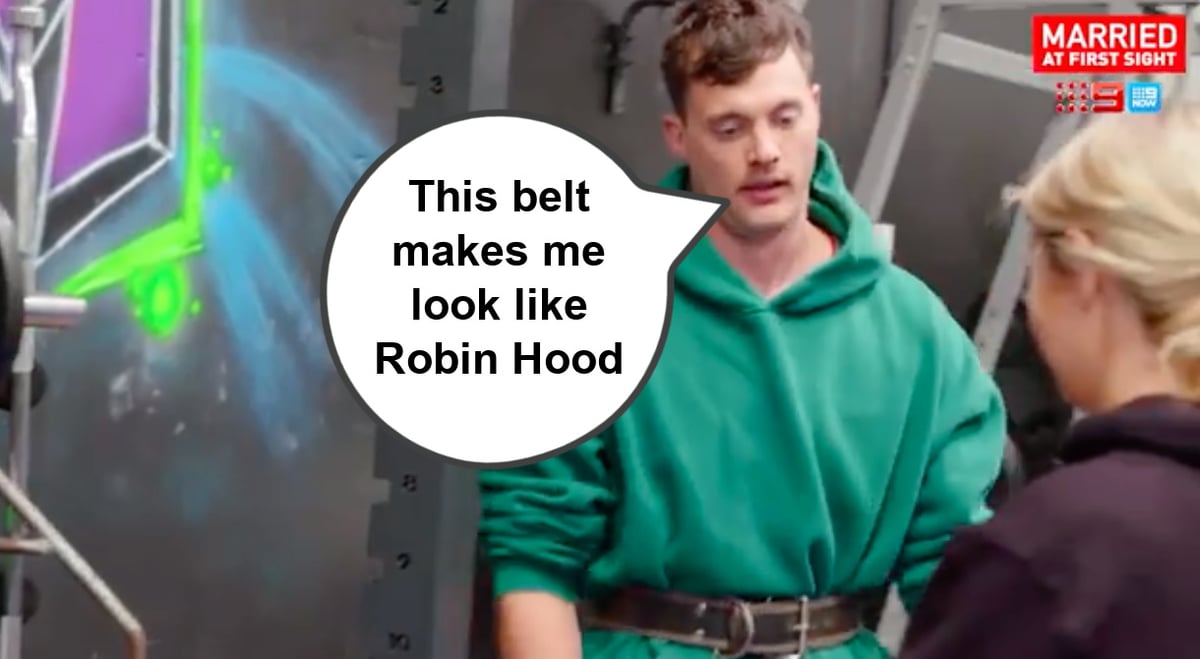 Yeah that's really random. She stares at Jackson in horror the whole time and honestly, valid.