The nominations for the 75th British Academy Film Awards have been announced and there are a few surprises in the mix. Especially in the Best Actress category where all the top frontrunners for the Oscars seem to have been left off the list.

And Gigi Hadid has given her first big interview since her family made headlines following the news that her ex-partner Zayn Malik had reportedly abused her mother Yolanda Hadid. There’s a reason the interview doesn’t mention this story, however, and instead touches on the new myth around supermodels and how they use social media.

Plus, it’s Weekend Watch time! This week, Laura and Kee are recommending a juicy new documentary and a bloodthirsty new Netflix show.

Get it in your ears below:

The Duke of Sussex took five months off work after the birth of his daughter Lilibet Diana in June, but he's back in 2022, with his first appearance a virtual panel discussion for US firm BetterUp.

Harry shared that he meditates for an hour to 45 minutes every day to "keep perspective" and said his various work commitments have left him feeling "burnt out" at times.

“I too experience burnout. And getting to the very end of everything I had. Any fuel I had in the engine, it was like, boom,” Harry said.

“That’s when you’re forced to look inside yourself.

“Mental fitness is the pinnacle. It’s what you’re aiming for. The road towards that can be really bumpy … It’s called inner ‘work’ for a reason.”

Check out the full chat below:

Prince Harry gets it: doing Inner Work® can be tough, but it’s a solid foundation to build on. And once you get all of that sorted out, everything else seems to fall into place. ☁️ pic.twitter.com/C1Wn4Tj3Be

An illegal camp of anti-vaccine mandate protesters in Canberra have been moved on by police.

Around 250 vehicles have been parked around the National Library, with audio warnings given on Thursday before the move-on order was issued on Friday.

Most cars are leaving the area voluntarily but at least one has been towed.

HAPPENING NOW: Police are moving on protesters who have been illegally camping in the Parliamentary Triangle in Canberra.

Police say protesting is permitted within the Parliamentary Triangle, but camping without a permit is not.

A protester using a megaphone said the crowd would stand their ground but urged those who remained on foot to be peaceful.

The anti-vaccination mandate campaign, known as the Convoy to Canberra, has included a march on Parliament House on Monday and a rally outside the National Press Club on Tuesday where Prime Minister Scott Morrison was speaking.

Police used capsicum spray and made three arrests on Wednesday at the camp.

MAFS week one recap: A "psychopath" and too many sex confessions.

It's the most wonderful time of the year.

The greatest program ever created in the history of humankind, Married at First Sight, is back for season nine.

My sister Clare and I spend our weeknights recapping this dumpster fire of joy and, yeah, a lot happened this week. 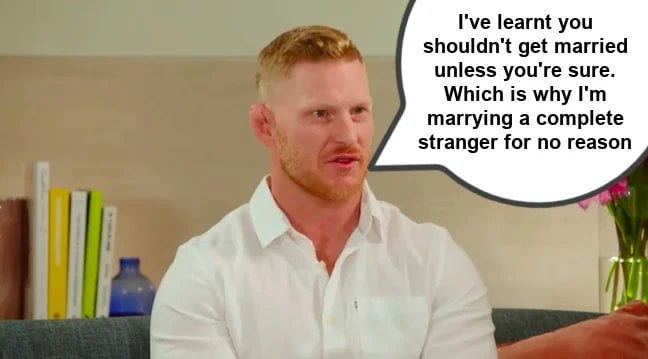 There's Brent who thinks his new bride might be a "psychopath". And Mitch who absolutely does not trust the experts (neither??). Cody is struggling with his sexual attraction to a woman he met less than 24 hours ago, and Andrew did have sex with his wife, but hated it. Because she was bad, apparently. He was great. For the record. At sex. And it would have been fine. If she wasn't there.

ANYWAY. We have to wait until Sunday night for the next episode, so in the meantime, catch up on all our recaps right here.

Exactly what you need to know about exercising after COVID.

If there's one thing I love doing, it's annoying innocent medical experts. And as Mamamia's Senior Health and Beauty Writer - my job involves a lot of this, so it's pretty fitting, really.

Like many people who have experienced COVID, I selfishly have A LOTTA questions. Specifically, when it's safe for me to get back into the swing of exercising. How long should you wait? What symptoms should I look out for? How long will it take me to get back to normal? 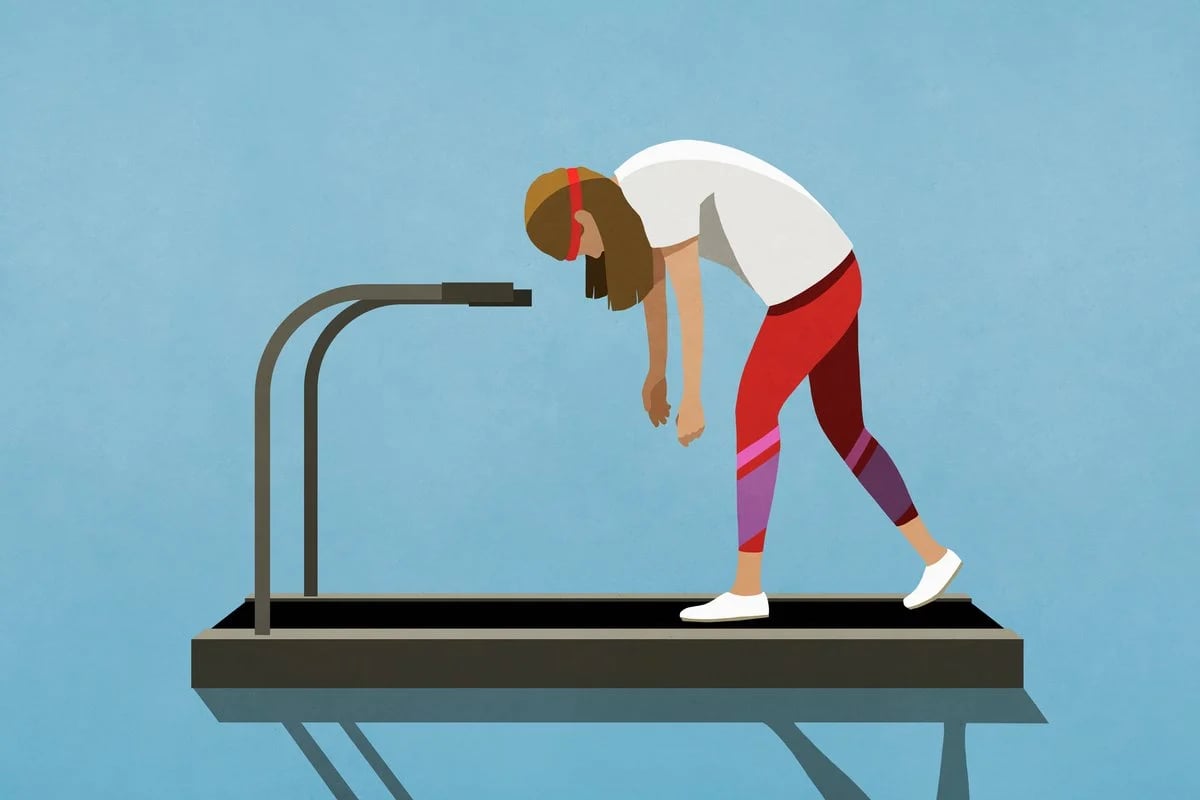 So, in the interest of not messing with my health, I spoke to a registered doctor and a fitness expert to find out everything you should know about exercising post-COVID.

Read: "Release all the guilt." Exactly what you need to know about exercising after COVID.

SPOILER ALERT: Why 'And Just Like That' had to end that way.

Last night the first season of And Just Like That came to an end.

The season has been a bit of a mixed bag. There were some truly iconic moments, glimpses of the show we once knew and loved, and some new characters in the mix that we've grown to love (I'm looking at you LTW and Seema).

There were also some moments and characters that have haunted our dreams. Like Brady having sex, and Harry's unexpected giant penis, and the... Che Diaz of it all.

But I think we can all agree the finale episode was PERFECT. It gave us some much needed closure and set us up for a brilliant season 2.

What to watch this weekend.

I don't know about you, but I feel like I've been crawling to the end of the week.

Now that it's finally here, I have to admit I'm pretty pleased that the weather here in Sydney is supposed to be... not great. That means lots of couch time.

If you're also planning a slow weekend, all you need to do is grab the snacks. I've got your TV covered.

Yesterday, I wrote about the 8 TV shows everyone will be watching this month. Some are already available for you to sink your teeth into, including the first three eps of Pam & Tommy and Netflix's super juicy documentary The Tinder Swindler.

I'm also going to be bingeing All Of Us Are Dead, which you may have noticed is top of the Netflix charts at the moment. I'm not usually a zombie gal, but my colleague Adrienne Tam's brilliant review has me convinced.

And finally, if you've been dutifully watching And Just Like That... you may have ~feelings~ about its ending this week. Once you're all caught up, Mamamia's pop culture editor Keryn Donnelly has written a brilliant discussion on why things had to end that way.

PM stands by religious discrimination bill, and all the news you need to know this morning.

It took me a couple of weeks of really building up some solid FOMO as I watched more and more of my friends and colleagues jump on the bandwagon. But I have caved... I am addicted to Wordle. Like, addicted.

If that word is still unfamiliar, let my colleague Isabella fill you in ahead of the weekend: The best first word to use, and 5 other hacks that will make you way better at Wordle.

But first, let's get up to date with the five stories you need to get across this morning.

The right of church schools to expel LGBTIQ students will be scrapped, as Scott Morrison reacts to the Brisbane College contract saga, while still trying to push the government's religious freedom laws.

The PM announced an amendment to the bill in a live B105.3 radio interview on Thursday.

"My kids go to a Christian school here in Sydney and I wouldn't want my school doing that either," he said.

“And the bill that we're going to be taking through the Parliament, we will have an amendment which will deal with that to ensure that the kids cannot be discriminated against on that basis."

Scott Morrison has flagged changes to his government's religious discrimination bill to further protect students from being expelled over their sexual orientation or gender identity. https://t.co/AzrOq8w3We

Brisbane's Citipointe Christian College on Thursday abandoned its bid to enforce a sexuality and gender contract that denounced same-sex attraction as a sin after widespread condemnation and a petition that gained 155,000 signatures.

Grace Tame has broken her collarbone in a bike crash, saying she was hospitalised after the accident on Thursday.

The former Australian of the Year shared a photo with her left arm in a sling saying she'd broken the bone in a "bike stack". 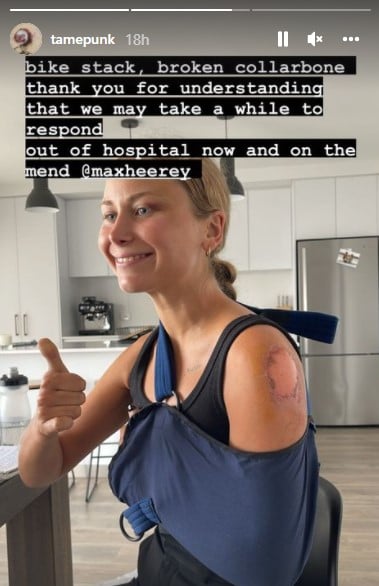 The campaigner against sexual abuse also suffered a scrape on her shoulder.

"Out of hospital now and on the mend," she added, tagging her partner Max Heerey.

She is due to address the National Press Club on Wednesday, alongside Brittany Higgins.

Novak Djokovic has described his detention and deportation from Australia that prevented him from defending his Australian Open title as an "unfortunate event" and thanked the Serbian president for his support.

An 11-day saga over Djokovic's entry visa ended with the Serb being deported for failing to meet Australia's strict COVID-19 vaccination requirements.

The top-ranked tennis star met with Serbian President Aleksandar Vucic on Thursday and described the events in Australia as "unexpected, to say the least".

He did not speak about details of the events in Australia, promising to give his "version" later.

There is talk now, that Djokovic plans to in fact get his COVID vaccine, which was the reason behind his deportation from our shores.

Novak Djokovic could be 'getting vaccinated' after Australian Open debacle https://t.co/bKOXOJyJf7 pic.twitter.com/fvrfFZRt5C

4. US forces kill IS leader in Syria.

US special forces have killed the leader of the jihadist group Islamic State in a raid in northwest Syria, President Joe Biden says.

Abu Ibrahim al-Hashemi al-Quraishi had led IS since the death in 2019 of its founder Abu Bakr al-Baghdadi, who was also killed when he detonated explosives during a raid by US commandos.

"Thanks to the bravery of our troops, this horrible terrorist leader is no more," Biden said in remarks at the White House, adding that US forces took every possible precaution to minimise civilian casualties.

Last night’s operation is a testament to America’s reach and capability to take out terrorist threats — no matter where they try to hide in the world.

I am determined to protect the American people from terrorist threats, and I will take decisive action to protect this country.

As US troops approached the target, Quraishi blew himself up, also killing members of his own family including women and children, according to Biden and US officials.

Facebook has reported a fall in daily active users for the first time in its history, thanks to growing competition from rival social media apps like TikTok.

Meta's shares fell 22.6 per cent to $US249.90 in after-hours trading following the announcement.

And you're up to date!

Check in throughout the day for all the latest in news, entertainment and trends.

Everything to know about the Year of the Tiger.

Tuesday marked the start of the new Lunar New Year celebrations for 2022, and so you might be wondering what the year of the Water Tiger has in store for you, as we transition away from the year of the Ox.

The Quicky speaks to an expert in Chinese astrology and an expert in cultural exchange to find out not just what lies ahead, but also why some are saying the Tiger could be just what we need to bring about the beginning of the end of the pandemic.