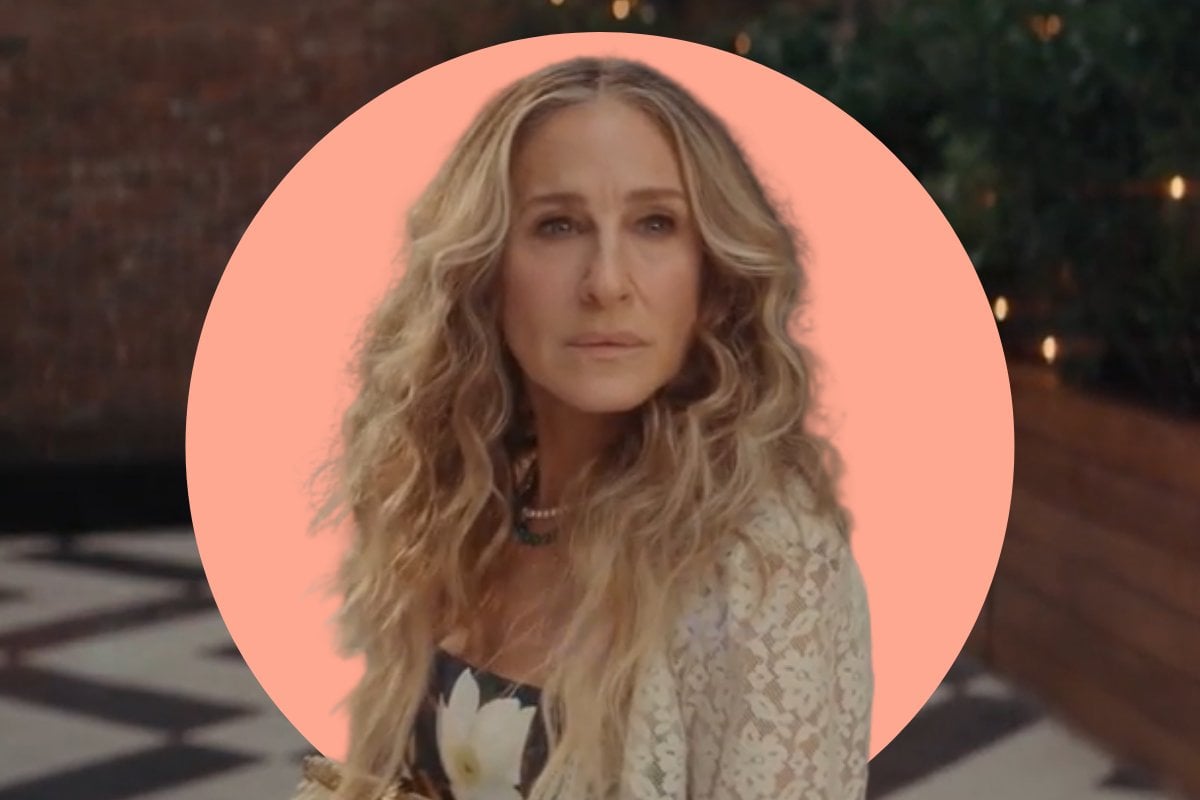 Content warning: This article contains spoilers for the final episode of And Just Like That season one. If you haven't already, watch it on Binge and meet us back here.

Ten weeks ago, we were re-introduced to some old friends.

It had been a little over a decade since we'd last seen them and lots had changed in that time.

Their hair was a little greyer, their kids were having loud 'ride me like a cowboy' sex in the next room, and they were struggling to keep up with all the mod cons like podcasts and Netflix comedy specials.

We were also introduced to some new friends who attempted to rebalance the diversity issues from the first series and the two questionable movies. Some of those characters have been welcomed with open arms by fans (I'm looking at you LTW and Seema) while others have haunted our dreams a little (*cough* Che Diaz * cough *).

It's been a mixed bag of a season.

So much was squeezed into the first couple of episodes that we, as viewers, felt like we had whiplash after watching them. It was cringey and almost hard to watch these women who were once considered trailblazers continually put their foot in their mouth and struggle to keep up with the generations coming up behind them.

Miranda was unrecognisable as a once beloved character. Steve was a meandering old man. It seemed as though Brady was the only person having sex in the city.

But over the 10-episode season, the old crowd and their new circle have grown on us. We've seen snippets of the show we once loved and have been introduced to new elements which have definitely improved the franchise.

Then, this week, the first season came to a close.

The finale episode saw Charlotte finally letting go of her perfectionism and learning to accept that things aren't always going to pan out how she planned.

Miranda went deeper into her mid-life crisis/sexual awakening, making the questionable decision to give up her internship and follow Che Diaz to LA.

At the end of the episode, we see Miranda leaving for the airport with her signature red hair again, a sign that Miranda's messy storyline is only going to become... messier in season two.

For most of the season, Carrie has been in limbo. She hasn't been the same confident, oozing 'main character energy' Carrie that we used to know.

She's been haunted by the loss of Big and his big presence in her life. She's been without her sassy, smutty best friend Samantha. Even her career had her on the back foot (I mean, the fact she had to sit there and endure the 'woke moment' button is completely baffling.)

The finale episode gave Carrie some much needed closure and the possibility of a much brighter, sex-filled future.

At the start of the episode, Carrie went on a date with Peter (aka the synchronised spewer). They shared an average kiss, and Carrie decided there wasn't really anything there.

After the date, Carrie texted Samantha to tell her about the kiss.

When Samantha asked Carrie what the kiss was like, she replied: "It wasn't Big."

Samantha, in her trademark Samantha way, then replied: "So small then."

The scene showed Carrie wasn't quite ready to move on from Big or Samantha.

While Carrie had been metaphorically haunted by Big throughout the season, in the finale episode she was literally haunted by him through a lamp which kept switching itself on.

LISTEN: The Mamamia Out Loud team discuss one of the And Just Like That characters. Post continues below.

Eventually, she asked the lamp aka Big to give her a sign about what she should do with his ashes. The lamp switched on one more time and then Carrie had a dream about their infamous bridge in Paris.

She travelled to Paris, scattered his ashes, and then text Samantha to meet for a cocktail.

In one scene, Carrie - and the audience - gained closure on both the death of Big and the absence of Samantha.

Carrie would never forget Big but she was ready to start opening up her life - and her heart - again.

And Samantha, who somehow managed to be one of the best parts of this reboot without actually being in it, would always be there.

Maybe we would never see her on screen, or even be privy to their text conversations again, but we can walk away from the finale knowing that somehow, somewhere, in some form, the iconic Carrie and Samantha friendship lives on.

In the final scene, Carrie records the first episode of her new podcast with her producer, Franklyn (Ivan Hernandez). You know, the mysterious silver fox we've been getting brief glimpses of throughout the season.

After they record the episode, Franklyn walks Carrie to the lift. Then he kisses her.

It's not a 'small' kiss. It's a big, unexpected moment. The stuff that the original series was made of. And it's a sign of what's to come for Carrie.

Who knows how the Franklyn storyline will play out. Maybe it's just a bloody good kiss. Or maybe it's the start of something big.

However it plays out, when we meet Carrie again in season two (fingers crossed) we'll be meeting a different Carrie.

A Carrie who is back doing what she does best. A Carrie who has reconciled with her best friend. And a Carrie who is open to endless possibilities. Perhaps even rekindling an old love?

And just like that we have an ending that has set up us for a brilliant second season.

B
bondi girl 3 months ago

Reply
Upvote
Unpopular opinion but I loved Che in the series. Out of all the characters brought in to balance diversity (which was OTT) I thought Che was brilliant. I was disappointed how Miranda and Steve were treated and the fashion was awful. Only Charlotte remained true to herself.
M
myf 4 months ago

Reply
Upvote
I have a consent issue with the kiss in the lift…,
B
brenda.monro29 4 months ago