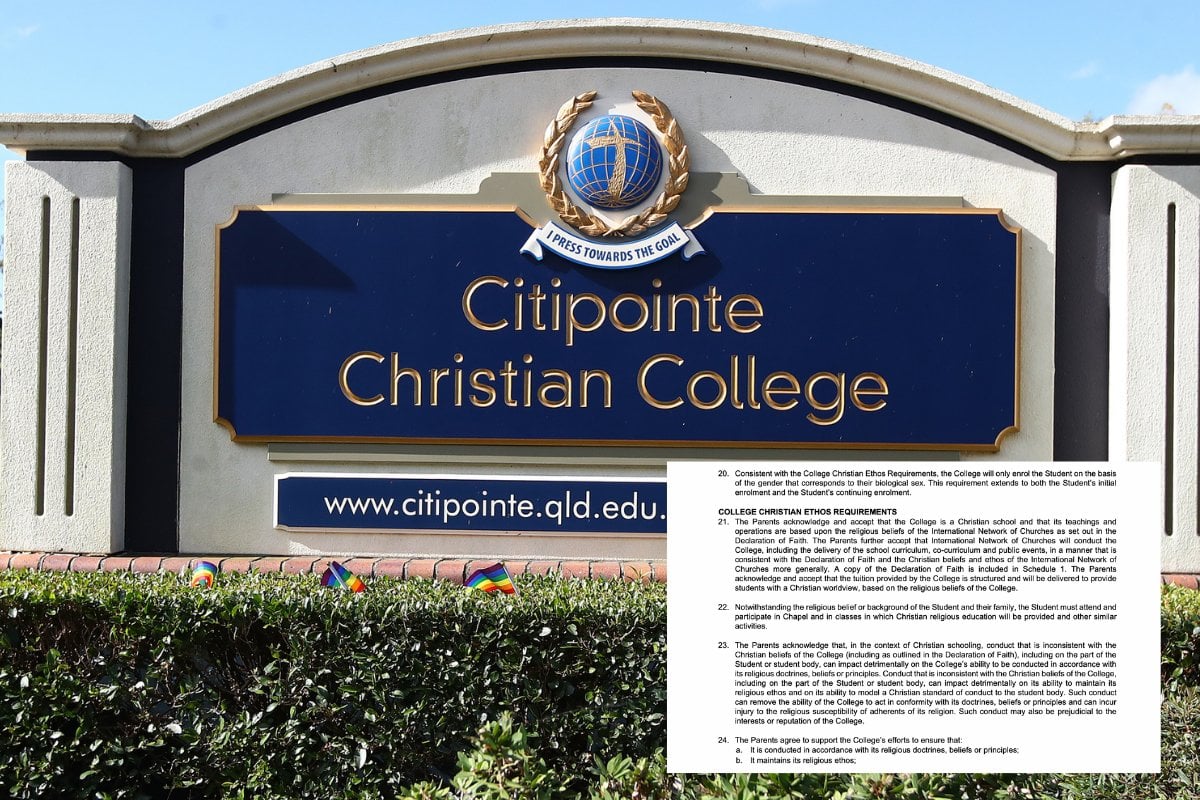 On Friday, Brisbane's Citipointe Christian College emailed parents an updated contract for them to sign on behalf of their child. If left unsigned it meant the student would no longer be allowed to attend the college.

The email was sent without any discussion with the faculty, days before class was to resume for 2022. It was sent with approval from Brian Mulheran, the principal.

In the updated contract it is stated that students must live by the ‘Declaration of Faith’. This declaration is provided for reference at the end of the emailed contract.

It is openly anti-abortion, homophobic and transphobic.

I'm a 35-year-old, gay male, who lives in Brisbane. I attended a Catholic high school.

I'm no longer religious and while I understand the importance of religion and appreciate it, I also understand how it can have extremely outdated views that no longer reflect the time we are living in.

These views have real-world consequences and effects on the students who attend not only Citipointe but many other deeply religious private schools.

This language has been around for 50 years, it is now at a point where a school thinks they can put it in a contract and not face any repercussion.

When I posted about this on Facebook, I was met with many questions about why I care and why should I say anything at all if I'm not a parishioner of the church.

I’ll try break this down for you as best as I can. Here are my answers to the many questions people have raised with me.

As a proud member of the LGBTQIA+ community I have an obligation to stand by my friends, brothers and sisters and fight the battles that they can’t.

Such open discrimination against them in their formative years has deep psychological effects. They carry these effects with them for the rest of their life. 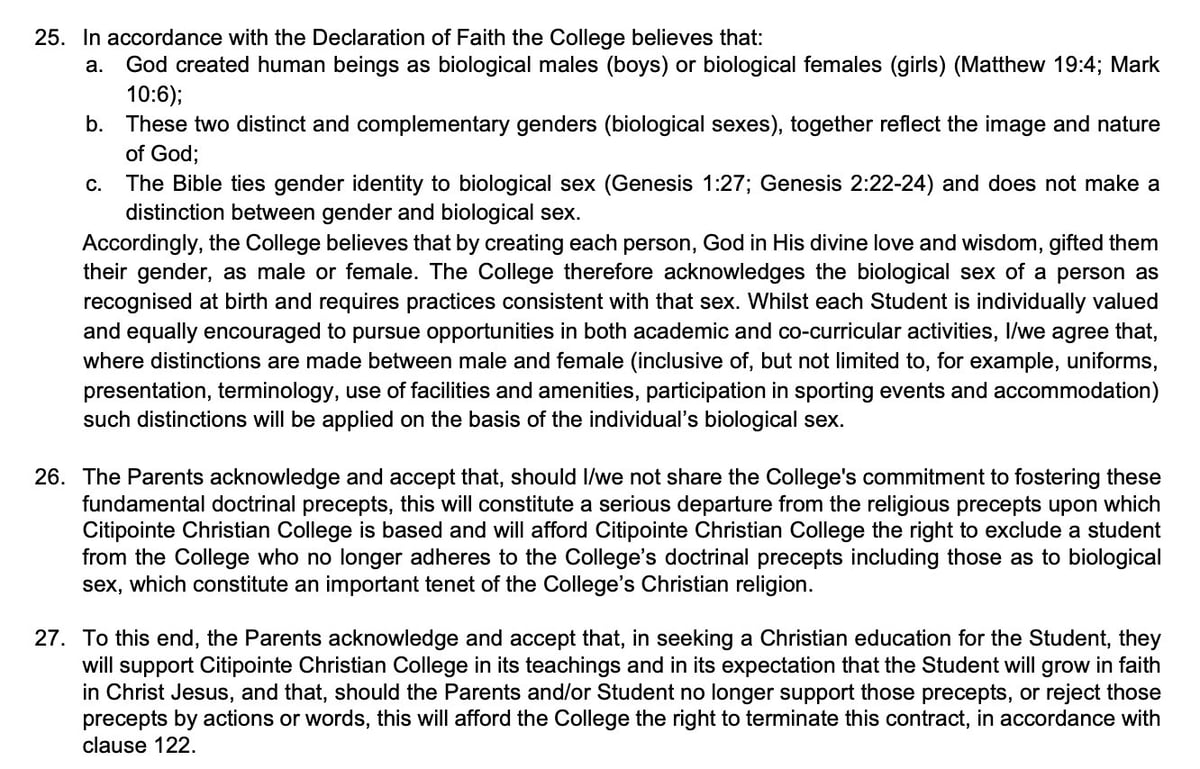 An excerpt from the contract. Image: Supplied.

I have had countless messages sent to me from people in the 40s and 50s, telling me their stories about Citipointe and about many other private religious schools in Australia.

They share with me their deep mental anguish. They're unable to understand the world they live in and in some cases, they've entered into marriage thinking that would solve the problem.

For me this is a clear cut case of brainwashing. Being told one thing over and over until you yourself believe it to be true. I have been told stories of how people cannot cope and ultimately end their life.

“Can’t a church teach what it wants to?”

No, it can’t. We have laws to protect us for this reason.

We have the Sexuality & Gender Discrimination Bill 2003 which prohibits discrimination on the grounds of sexuality, transgender identity or intersex status.

I also want to highlight the fact that in 2019 the State and Federal government provided Citipointe Christian College with $13 million of funding. It also provides tax cuts to the Citipointe Church, an organisation with approximately over 10,000 Australian members.

This funding is paid for by me and you. This is why Australia has a say in this issue.

Many of these organisations don’t believe that mental health exists. I have had countless DMs telling me how teachers have denied that a student is suffering with depression or anxiety, with one parent even telling me the school's solution to her child’s mental issues was to perform an exorcism.

Is this something we really want to be funding?

“What is the impact on you personally?”

Students who are fed the anti LGBTQIA+ rhetoric grow up believing it. They then enter the workforce and hold positions of power and make decisions based on their faith.

Our Prime Minister is one example. He says the doesn’t dictate his policies. However, last year he introduced a bill that allows Religious Freedoms. It claims it will protect Australians from discrimination on the basis of religious beliefs and activity.

This bill means Citipointe can make parents sign a contract with openly homophobic and transphobic language.

It also means the church is free to discriminate however it pleases.

How in 2022 are we creating more archaic laws than ever before?

Christian Hull is an AACTA nominated Australian comedian and content creator who is accumulated more than 650 million views on his plethora of hilarious videos and gained a loyal growing following of over 3.1 million on social media.

Reply
Upvote
Disagree with this quote “while I understand the importance of religion and appreciate it, I also understand how it can have extremely outdated views that …..in.” Religion has no importance and should never ‘be appreciated’. Religious views are based upon historic ‘texts’ that have been edited to keep those in power powerful. The rules quoted from these texts are cherry picked to serve specific purposes. These texts are ‘not the word or god’ they are fantasy fiction used to maintain power.
J
jasc.cunningham 7 months ago

Reply
Upvote
1 upvotes
It is astounding how they equated homosexuality with paedophilia & bestiality(wtf!!). This is truly medieval evil - great they have been called out though.
L
laneamanda6845 7 months ago

Reply
Upvote
@jasc.cunningham not so ‘astounding’!!! Their bible, (historic writings from the time before Jesus and from his birth until his death along with random predictions of the future, highly edited and translated thousands of times usually to ensure that men remain in power) that is not written by god or his son (should either of them really exist) makes these claims. All they are doing is using these words to marginalise those who they do not think belong!!!
Resources
Very Peri
Skin
News
General
Opinion
True Crime
Politics
Sport
Explainer
Entertainment
Celebrity
Reality TV
Movies
TV
Books
Rogue
Royal
Lifestyle
Beauty
Fashion
Weddings
Home
Wellness
Health
Fitness
Travel
Food
Family
Before The Bump
Pregnancy
Baby
Kids
Teens
School
Parent Opinion
Work & Money
Money
Finance
Career
Lady Startup