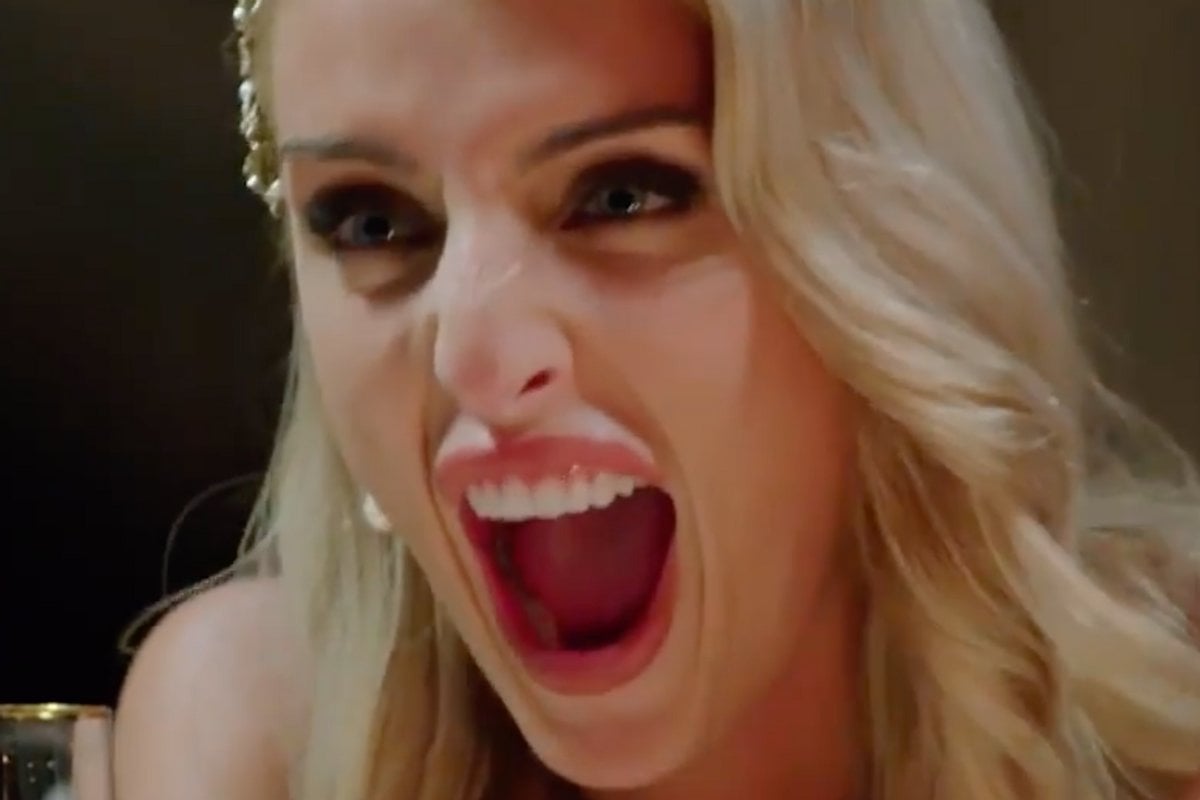 The nation has not slept.

Yes, COVID may have stolen Christmas.

It may have ruined New Year's Eve and no one has travelled for two years.

But COVID cannot take our Married at First Sight, John Aiken simply will not allow it.

We open on news footage about some sort of "health crisis" and omg really what happened. The narrator tries to draw a parallel between the pandemic and people wanting to find love and okay but what does that have to do with Married at First Sight?

We get flashes of the three experts: Mel Schilling, John Aiken who is no longer (legally and/or ethically) allowed to call himself a psychologist, and the one with the accent who likes to talk about sex. And for yet another season we get no mention whatsoever of Trish who did literally seven seasons of this sh*t and didn't get so much as a farewell. 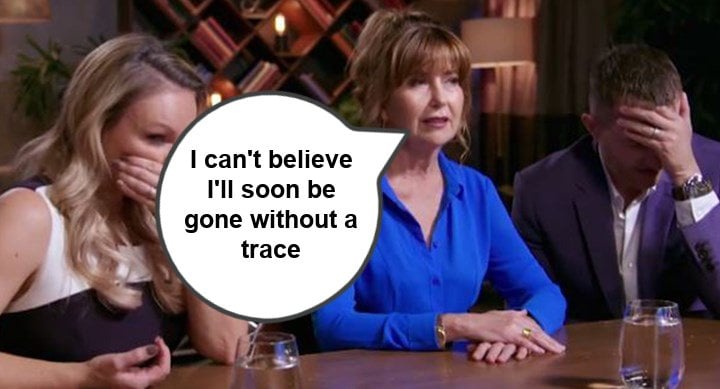 "Will you guys at least put in for a farewell gift?"

It's the Hens and Bucks nights, and we open on a gentleman named Jackson.

He looks haunted and talks about his traumatic childhood and with all due respect we're not really here for the tears we're more here for the... yelling.

Jackson explains how passionate he is about women being respected, which is why he signed up to the same show where a man put his wife's toothbrush in the toilet because he got annoyed with her.

We watch some of the contestants tell their families they're getting married to a StRaNgEr and if we hear this conversation one more time we're going to tut aggressively but obviously keep watching. 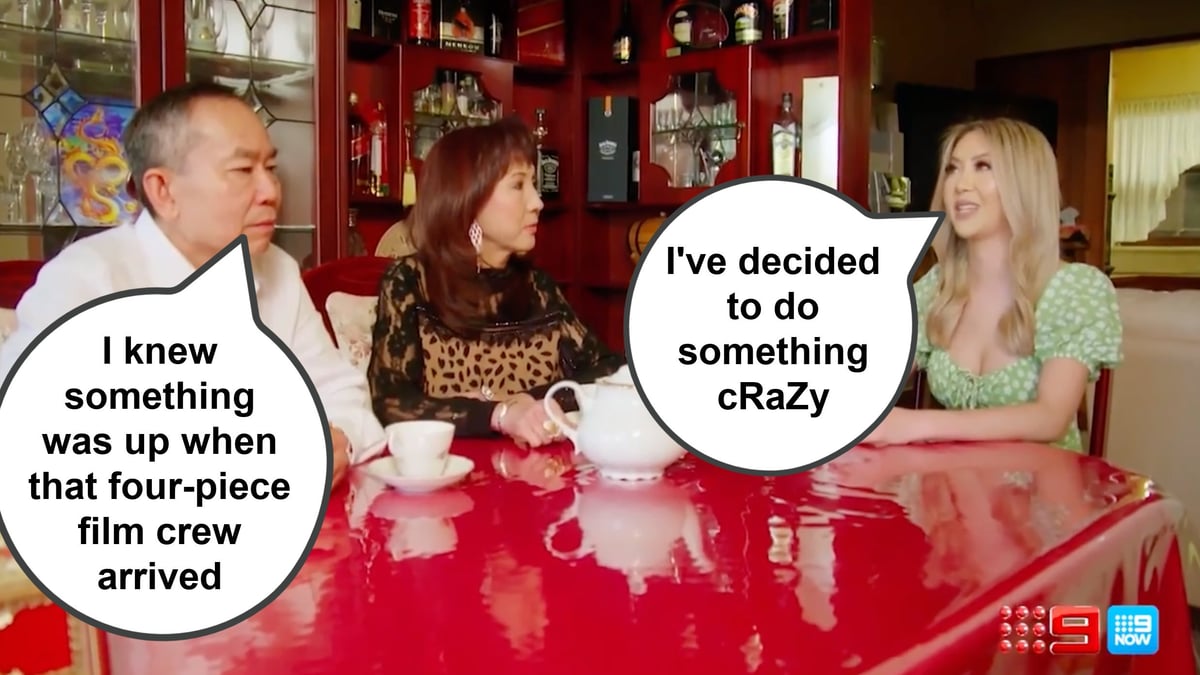 The Nine logo was a dead giveaway.

"You know how in our culture having an arranged marriage is a normal thing?" asks Selina, whose parents were born in Cambodia.

They look at her with horror before whispering through gritted teeth "are you talking about that ridiculous f*cking show on Channel 9 again because we sent three complaint letters last year and only got a courtesy reply."

Of course, the obvious difference between an actual arranged marriage and Married at First Sight is simple: 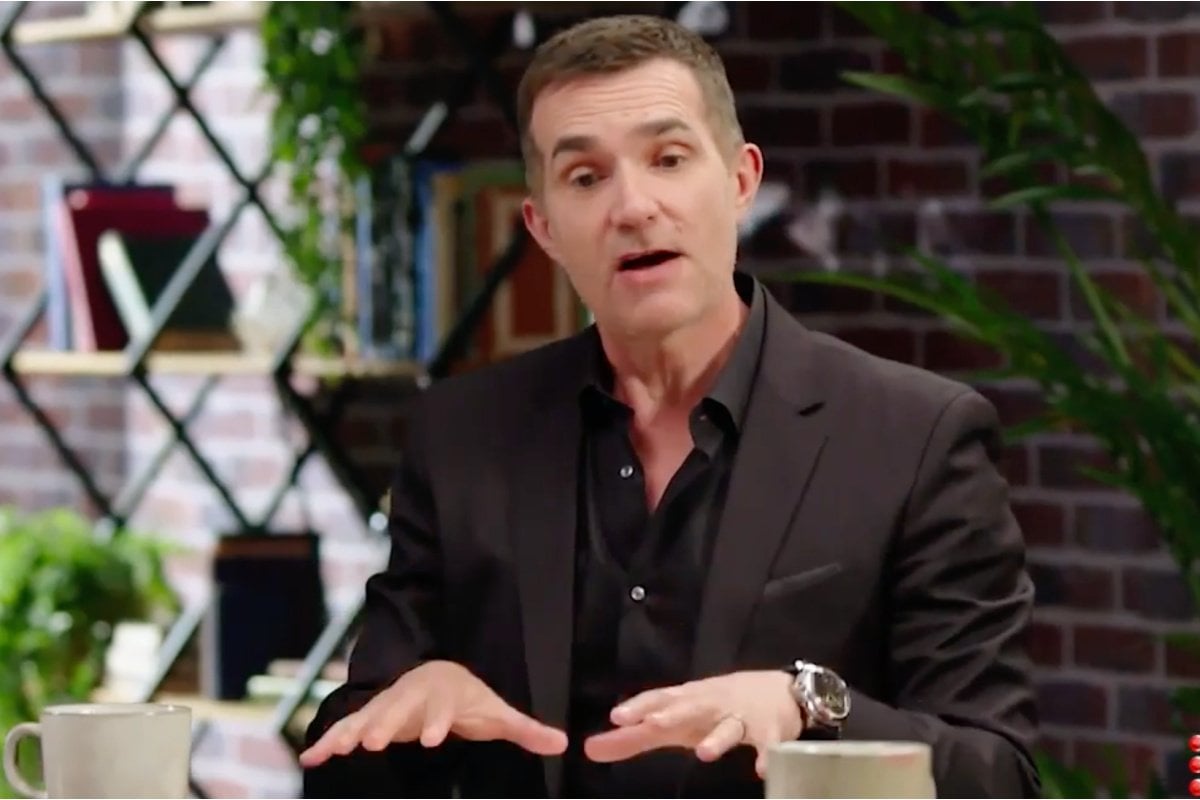 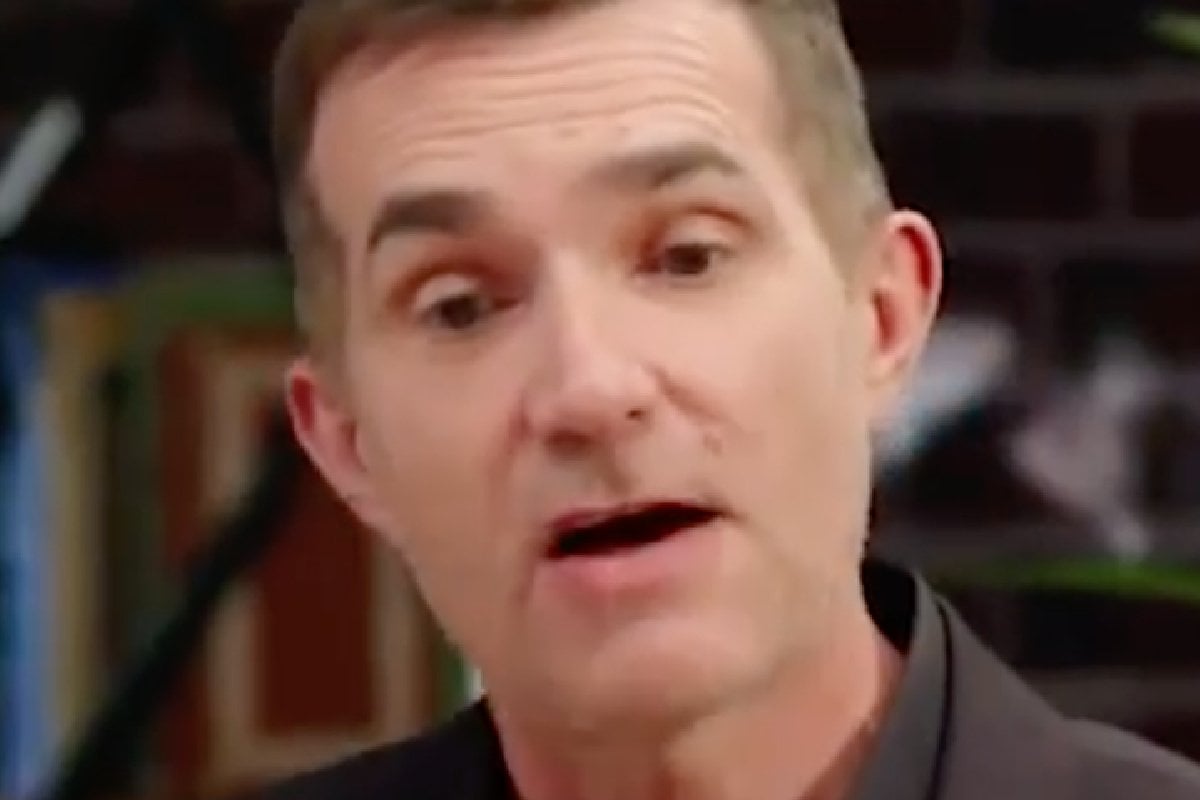 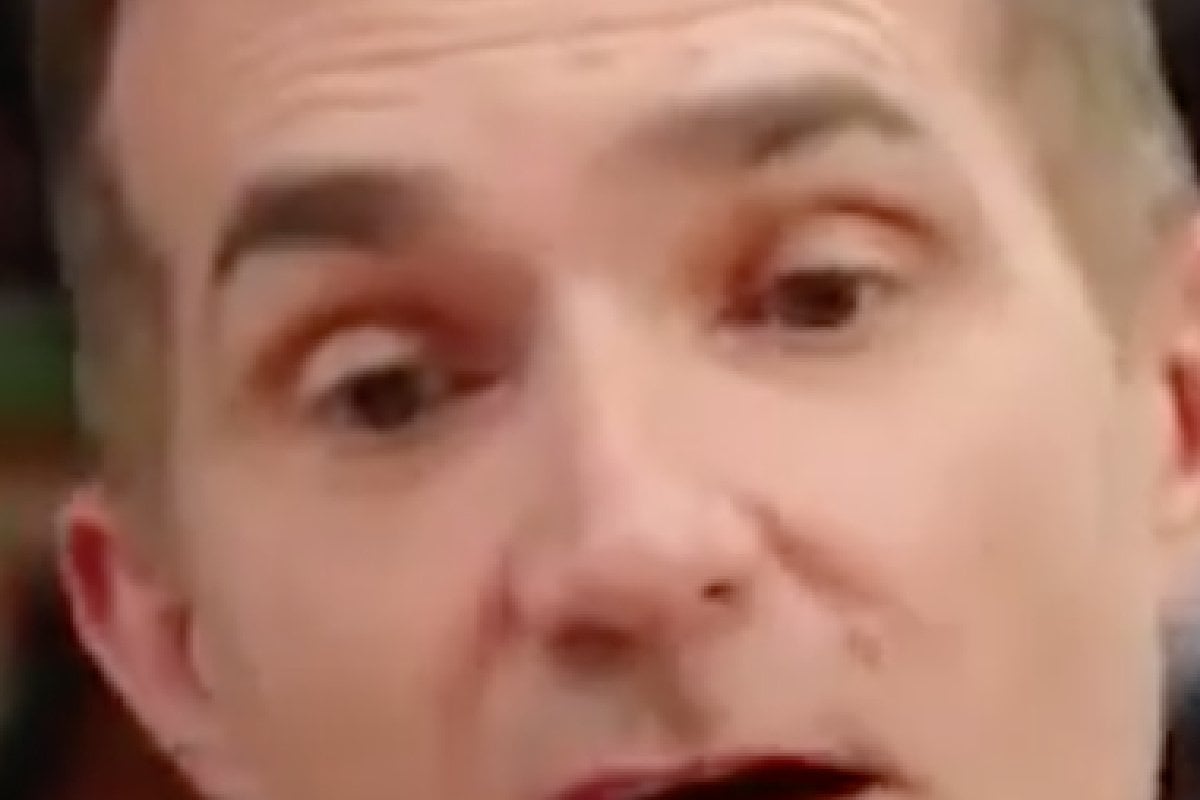 At the Bucks night, we're introduced to Andrew who is from Dallas and we don't mean to be rude but... what are you doing here. He says he wants the experts' help to find a relationship that's 'long term' and omg the experts are so sorry but they actually can't help with that. Sir.

Over at the Hens, a woman named Olivia explains, "I have a lot of insecurities," and we can hear an expert in the background ask, "Can you pls tell us what they are so we can exploit them?"

When asked if she has any "deal breakers," Olivia casually says she can't stand people who are rude to waitstaff.

What if they're... sh*t? At their jobs? Or you just generally disrespect people in hospitality because you think you're better than them? What then, Olivia?? 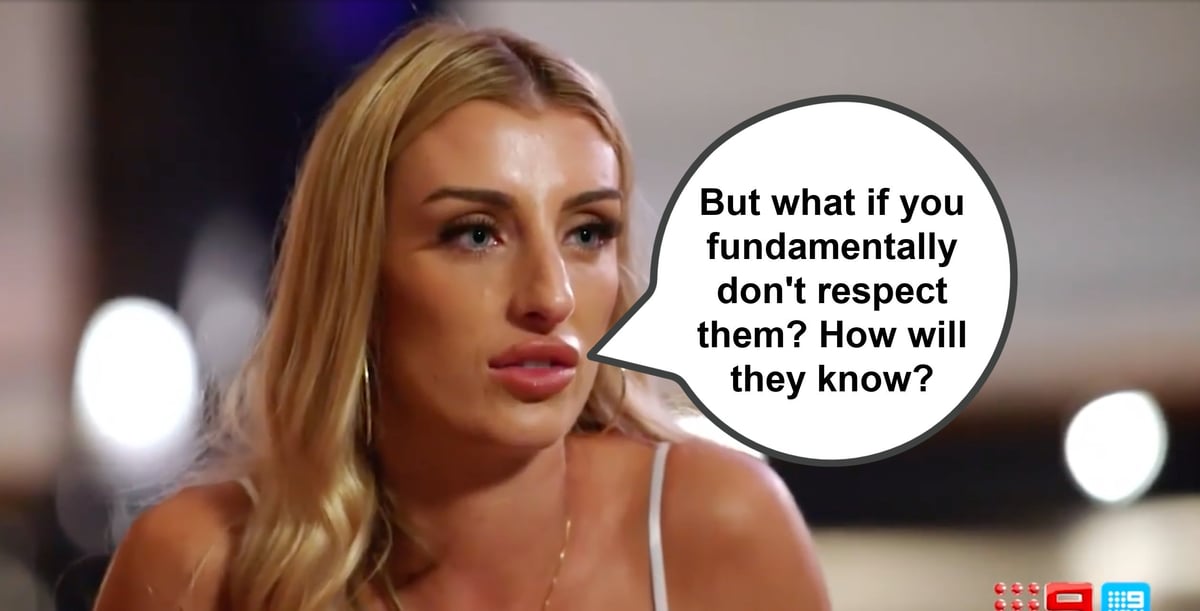 We watch in real time as Tamara learns it's broadly frowned upon to be rude to waitstaff for no reason, and experiences flashbacks to when she kicked the waiter 15 minutes ago as she entered the venue she's currently sitting in.

On a more important note, John Aiken got a haircut. So how about that. 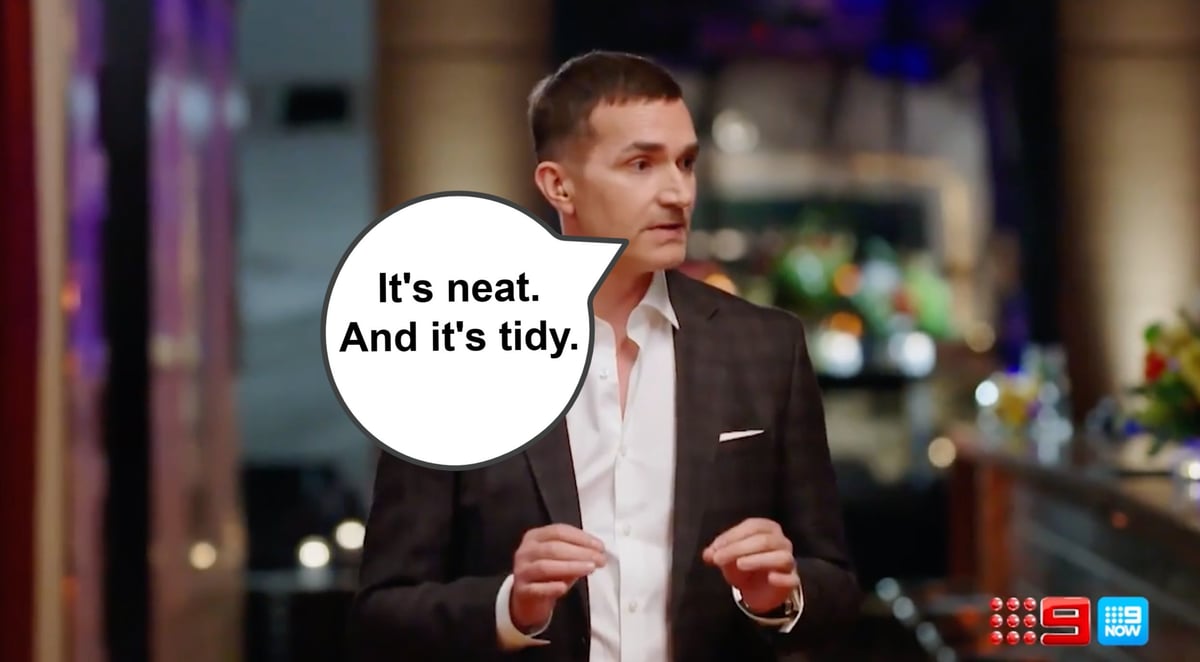 Your haircut is the most commitment you've ever made to this show.   John says he, Mel and Alessandra have been very busy over the last few months. By which he means the last few hours. Where they also took two half-hour breaks. The remaining 11 minutes were spent ranking people based on their attractiveness. For leisure.

The experts match Selin with Anthony.

Selin says, "I'm trusting the experts with my future" and for the love of God please don't do that. She explains her grandparents also had an arranged marriage and yes but was it on the TV with the sole aim to increase ad revenue for Channel Nine. Serious question. Yes/No?

It's their wedding day and after nine seasons of this, do we need the slow motion footage of everyone getting dressed in rental bridal gowns for their non-legally binding marriage because we think... no.

But as we arrive at the wedding venue, we need to address something.

We would never comment. On something so petty. And insignificant. But.

And both aunties have broken arms. 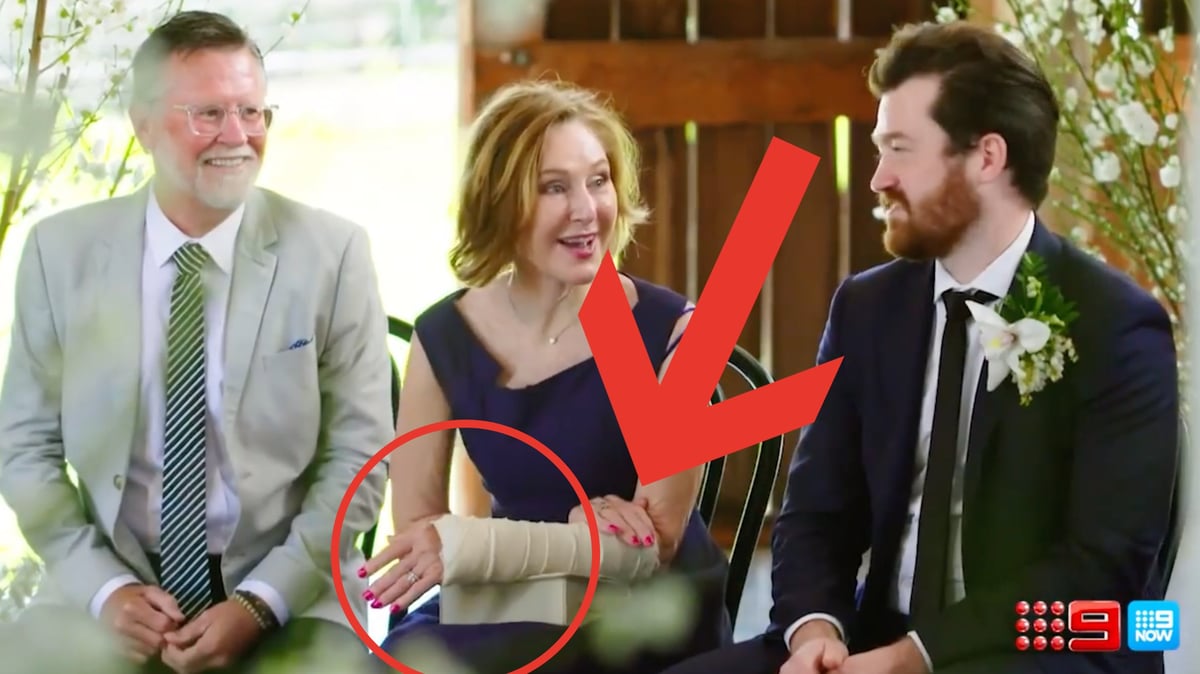 A single broken arm is one thing... 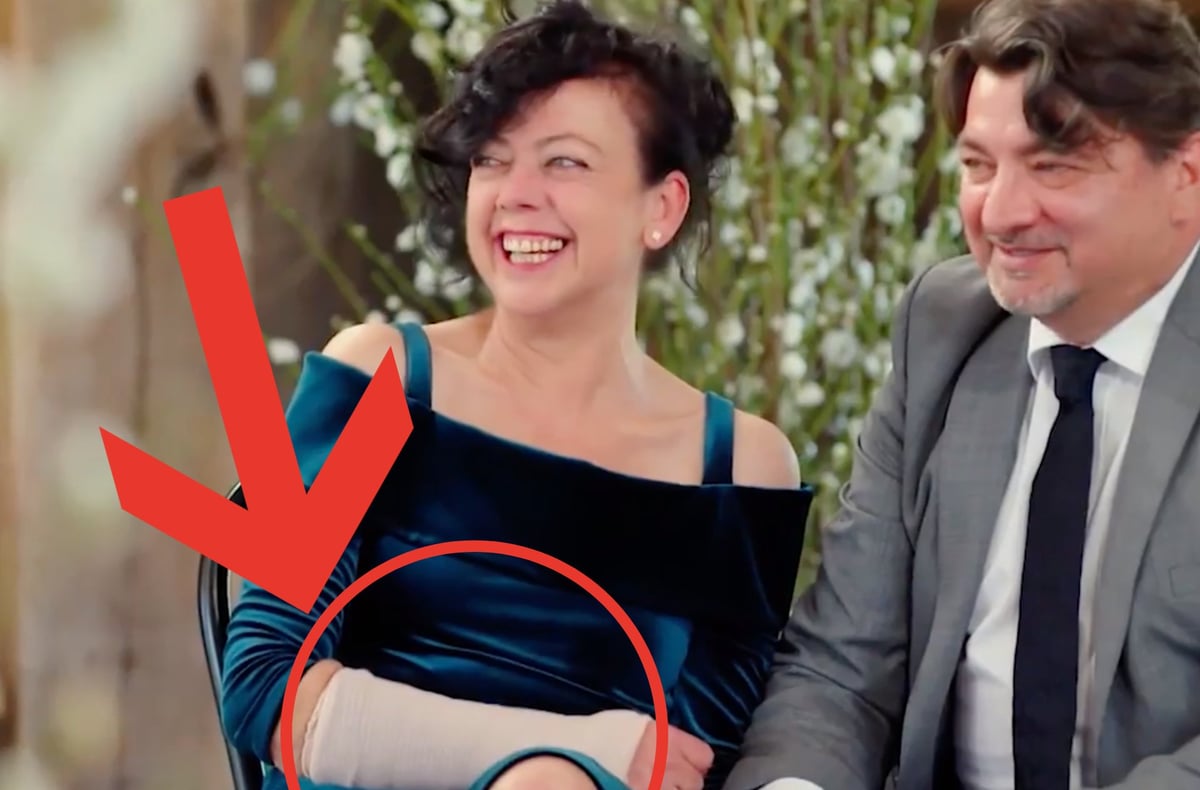 BUT TWO? AT A WEDDING WITH JUST 5 GUESTS?

We need you to understand that every woman in attendance has a broken arm. One hundred per cent of the women. Which is statistically so profoundly unlikely.

AND THEY ARE THE SAME ARM.

THEY BOTH HAVE THE SAME BROKEN ARM. HOW DID YOU BREAK IT. THAT MUST MAKE SMALL TALK SO EASY.

It gets uncomfortable when they are made to applaud the bride and groom and can't because of their fractures, which would be fine if they weren't literally fifty per cent of the venue.

Sorry but we will never move on from this. 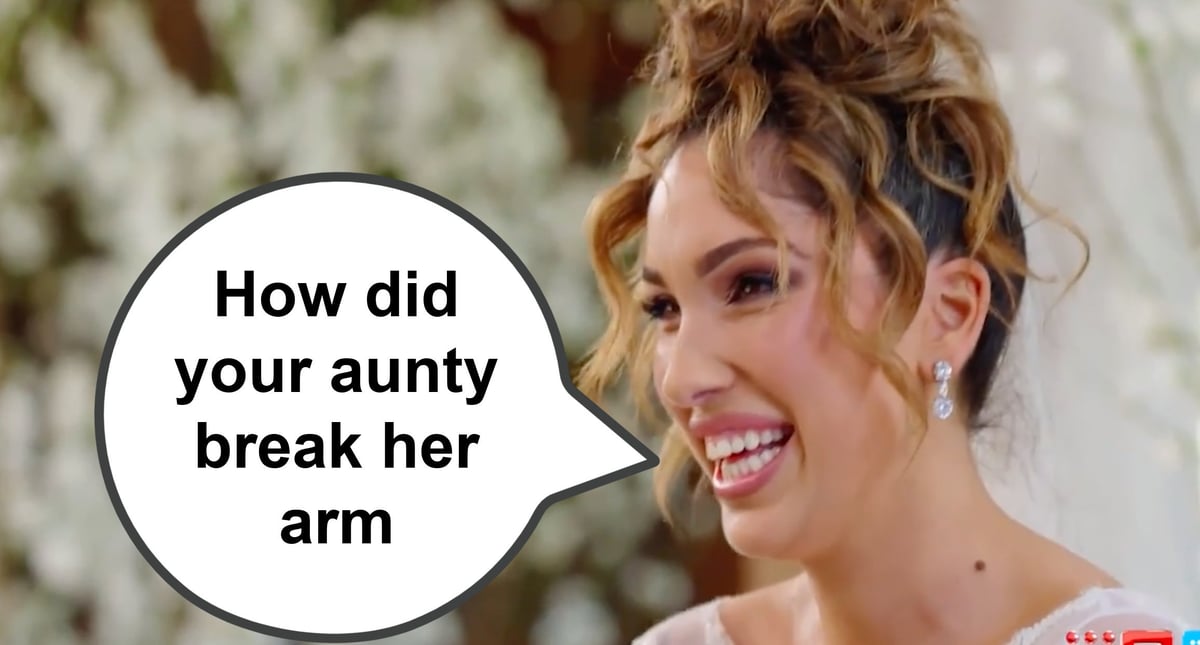 "I was gonna ask you the same lol."

Selin and Anthony quickly discover they're both parents, and Anthony refers to the fake letter he has in his pocket from his daughter about his fake wedding.

At the reception, Selin disappears and re-emerges in a costume to perform a belly dance for her new husband. It's a nod to her Turkish culture which is lovely but we must ask: must every wedding have a gimmick?

As the reception wraps up we remember that every woman in this room has a broken arm except for the bride and it's just such an incredible coincidence.

But the experts have reached their quota of 1 x semi-legitimate match, so it's time for Tamara and Brent.

Tamara tells the cameras she really enjoys the 'psychology side' of this experiment.

Narrator: There is no psychology side to this experiment.

But speaking of psychology, Brent is spiralling. He has a serious phobia that may or may not be present at his wedding.

His groomsman takes one for the team and confronts Brent with the reality that his bride will most likely come with feet. Brent gets incredibly upset, and probably believes he's been set up by producers ever since he told them about his foot aversion. He was expecting his bride to glide down the aisle, like a footless ghost, and now all his dreams are ruined. 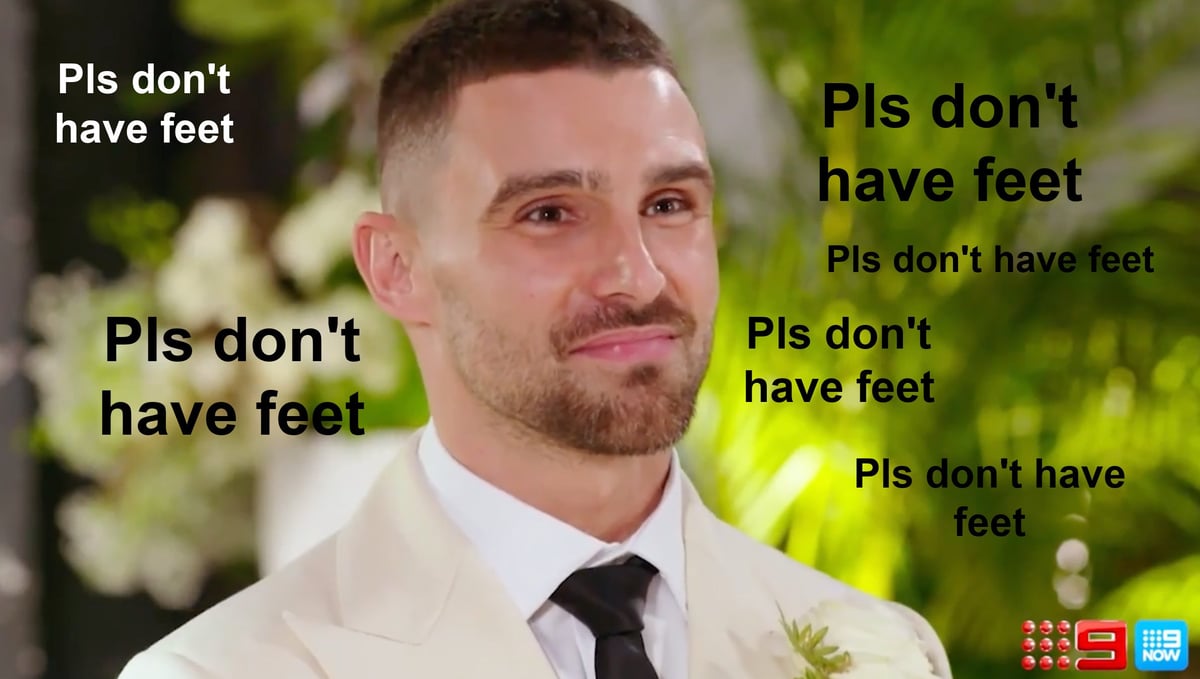 He waits at the altar, hoping, praying, for a footless bride. But alas, she clomps towards him, in shoes that indicate there may be feet present.

He tries to take a little glimpse but they're covered by her gown.

Tamara thinks Brent is handsome, but when she asks what he does for a living, he mentions he works in a nightclub. This is a problem, because Tamara hates hospitality staff given they have less value as human beings than her. She reasons that "average isn't for me" and says he's probably not the man she asked for given he isn't that ambitious and lady. The man is ambitious. He went on this godforsaken show looking for love.

The producers begin to panic that maybe Tamara's disdain for anyone/everyone in the service industry isn't enough to carry an episode, so the wedding photographer suggests Brent get down on one knee and hold her... foot. They call it a "Cinderella" moment. Which isn't a thing. He confirms, once and for all, that Tamara has feet, and decides a quick call to John Aiken is in order. 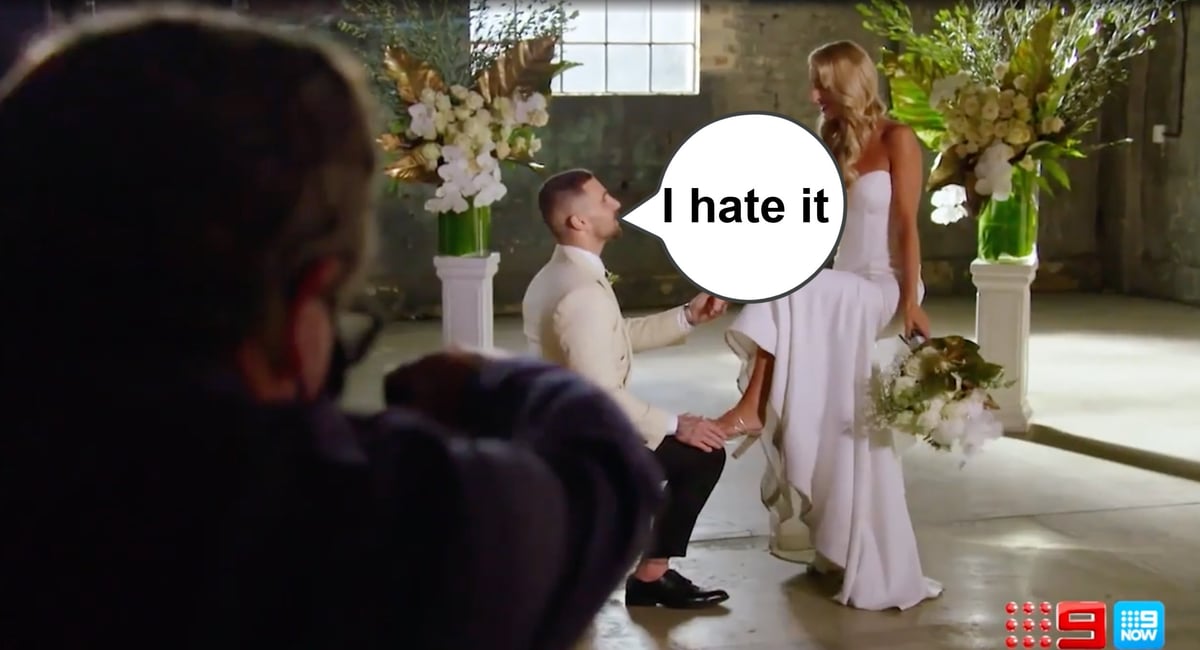 "There's toes and nails and so much foot I literally hate it."

At the wedding reception, Brent's groomsman - the man who was pragmatic about feet - realises he hates his friend's new bride.

Brent explains there was a misunderstanding where Tamara thought he worked behind the bar but actually he worked for the bar (?) and she worried they'd be fundamentally incompatible.

His friend, Levi, does not like this at all.

You can listen to Clare and Jessie Stephens on CANCELLED every week. Post continues below.

Brent asks what she would have thought if he worked in a toy shop which is the strangest hypothetical we've ever heard but please go on.

Tamara says that she'd be worried they weren't aligned, and he wasn't ambitious. She says it wouldn't look good for her to be with someone who just wanted to work in retail for the rest of their lives. 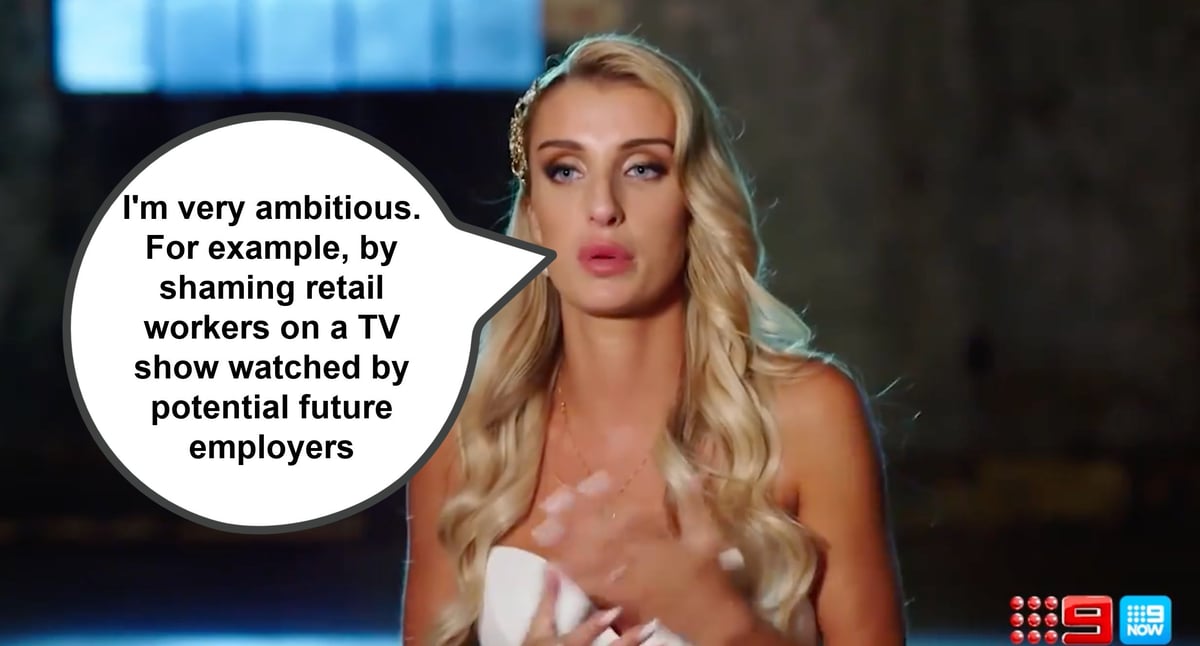 "You feel like someone who worked in a toy store would be a step down for you," Levi says and HOW MANY TOY STORES EVEN ARE THERE IN AUSTRALIA, LIKE FOUR?

Brent concludes he thinks his bride might be "spoilt and pretentious and entitled" which is some of the most perceptive commentary we've ever seen on this show.

When they go to cut the cake, Tamara struggles to slice it, before blaming Brent for passing her the knife the wrong way which a) he didn't and b) even if he did just turn it around and cut the cake like a normal person?

But Tamara wants an apology. For the thing Brent didn't do. 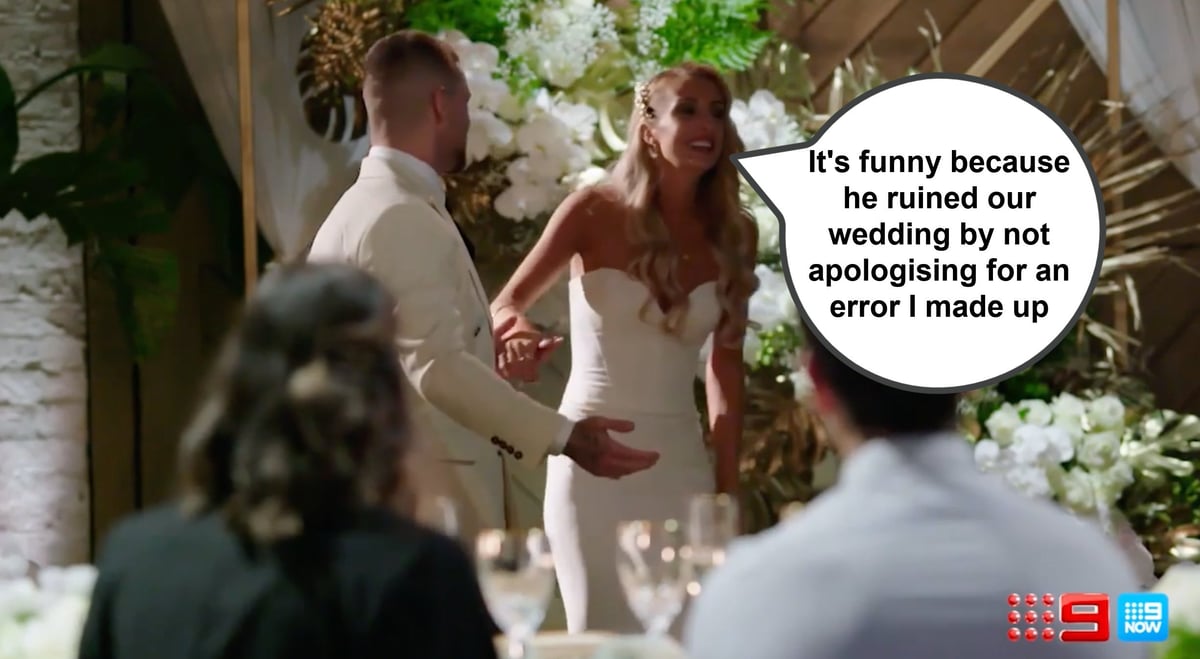 Hahaha it's all just a bit of fun.

While Tamara complains to her friend that Brent might be too short, Brent tells the camera - and we quote: "I think my wedding is going well. And by well, I mean my wife is a psychopath."

And that friends, is why this is the best television show in the country.