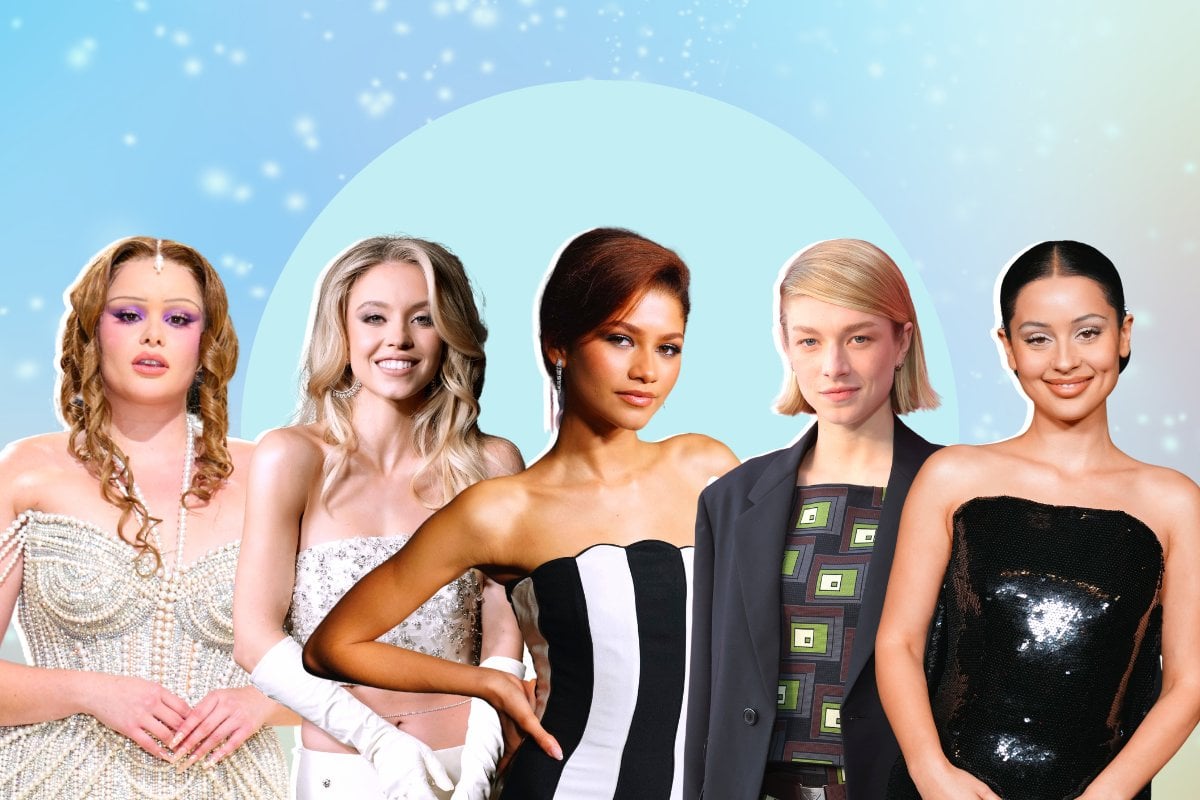 These days, it's rare for anything to become 'appointment viewing'.

With the many streaming services, our love of 'binge watching', and the million other things jostling for our attention at any one time, the idea that people would sit down at 8.30pm on the dot so they don't miss a second of The Sopranos is wild.

Times have changed. But every now and again, a show comes along that does become appointment viewing. It happened season after season with Game of Thrones, for example. If you've been anywhere on the internet in the past few weeks, you may have noticed that Euphoria has become one of these series.

Each week (it airs on Foxtel and Binge on Mondays in Australia, express from the US), the internet erupts with commentary and memes about the gritty teen drama, currently in its second season.

Euphoria has a huge ensemble cast of young actors, whose characters are dealing with serious issues like drug addiction, violence and mental illness, along with just the general messiness of being a teen.

The show's profile (and award wins) have dramatically increased each cast members profile, but that's not to say they weren't doing great things beforehand.

Here's everything you need to know about the cast of Euphoria. 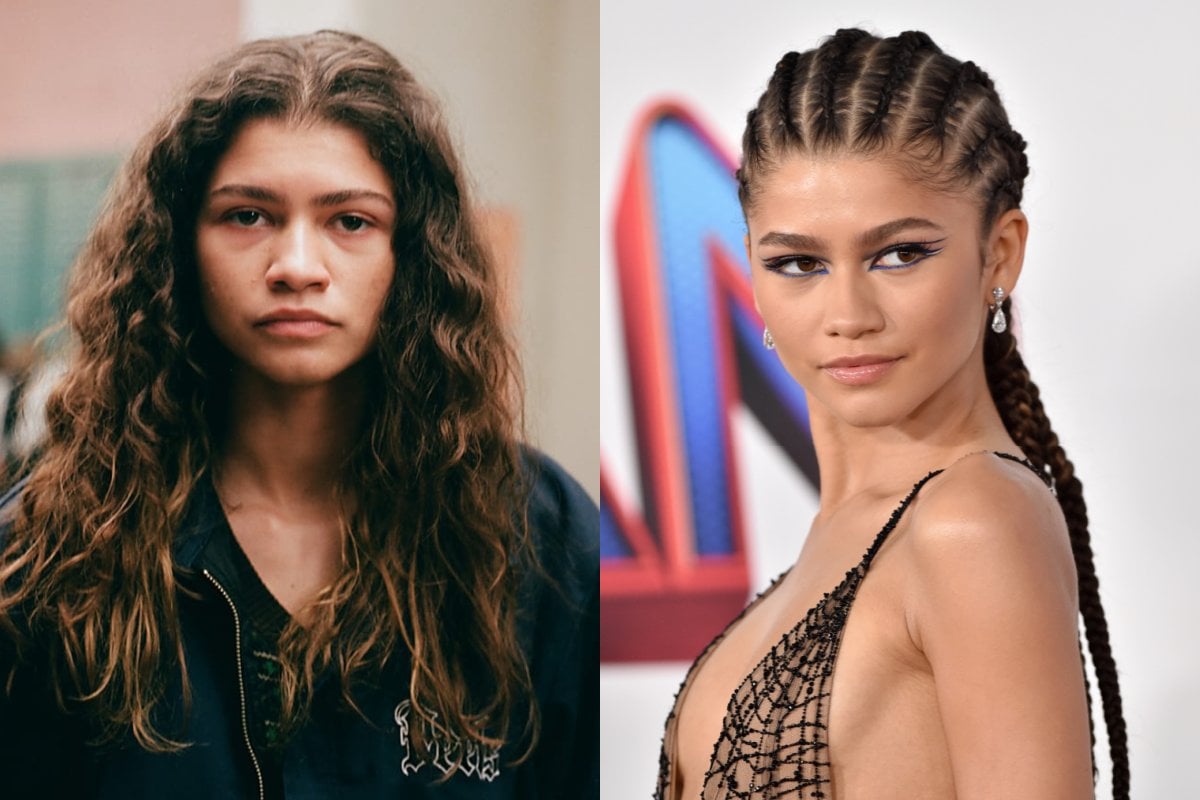 Zendaya, 25, stars as Rue, a 17-year-old recovering drug addict who returns to high school after an overdose and time in rehab. In 2020, she won the Emmy Award for Outstanding Lead Actress in a Drama Series at age 24, making her the youngest winner in history. She is also just the second Black woman to win, following Viola Davis.

Zendaya began her career as Rocky Blue in Disney Channel show Shake It Up. Her film roles include The Greatest Showman, Marvel's Spider-Man trilogy, Malcolm & Marie and Dune.

She's also released music. She signed to Hollywood Records (Disney's label) in 2012 and released her debut single 'Replay'. A year later, she released her eponymous album. Zendaya's biggest musical commercial success came from 'Rewrite the Stars', a debut with Zac Efron from The Greatest Showman soundtrack.

Zendaya dated her Euphoria co-star Jacob Elordi in 2019, but had broken up by mid-2020. Zendaya is now officially dating her Spider-Man co-star Tom Holland, after years of speculation about their relationship. 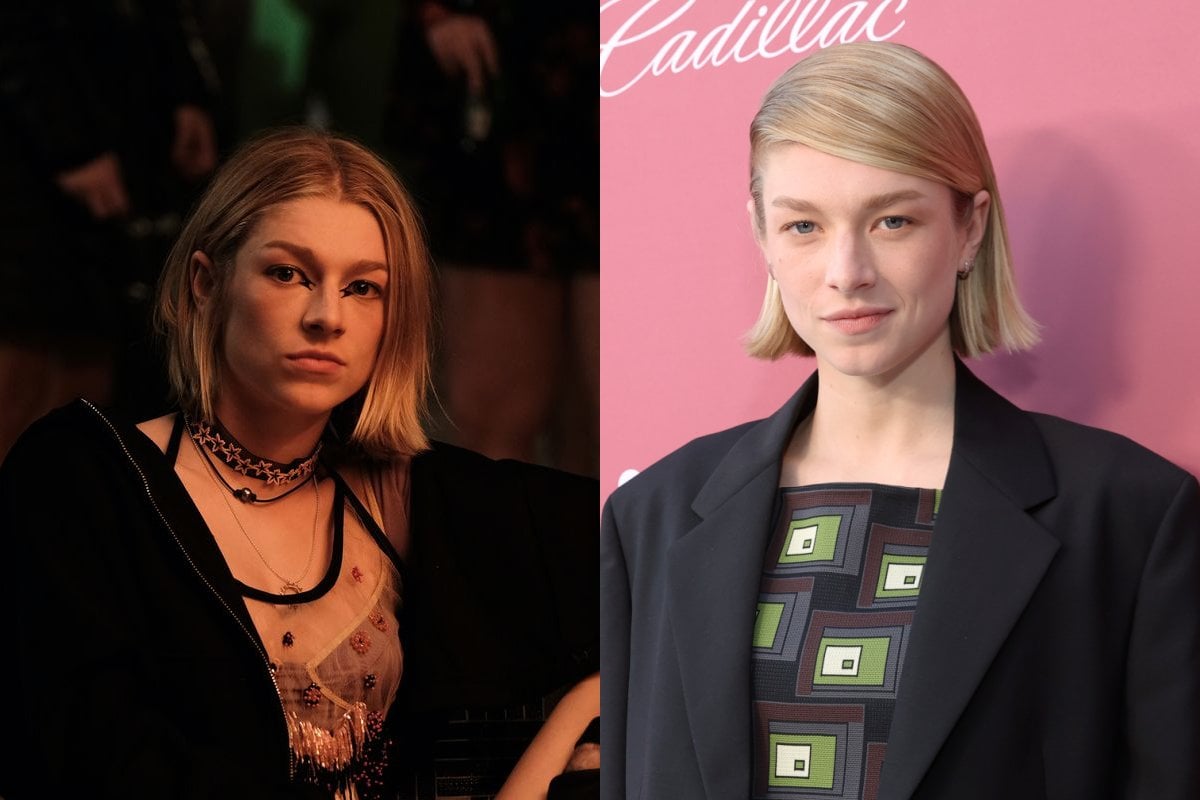 Hunter Schafer plays Jules, a trans girl who movies to town after her parents' divorce after develops a relationship with Rue. Incredibly, Euphoria is Hunter's first acting role. The 23-year-old helped write Jules' special episode, and has worked with Euphoria creator Sam Levinson to ensure Jules' experiences reflected Hunter's own.

"It didn't feel natural at first," Hunter told V magazine about sharing parts of her own transition within Jules' storyline.

"Part of surviving [that] experience was just, like, getting through s**t. Letting it rest, and not addressing it. I think that’s what I had been [doing] up to that point: just going and going, fighting to be on the other side of my transition," she said.

"I was like, 'Oh s**t.' And remembering things that I hadn’t thought about until [that point]. That happened throughout the entire [first] season: As we worked through different scenes, I'd have to remember a new detail, to dig up an artifact from within myself, and hold onto that moment for the scene."

Hunter is also a model and activist, who protested North Carolina's 'Bathroom Bill', which prevented transgender people in the state from using bathrooms that aligned with their gender identity. Her activism landed her on Teen Vogue's 21 Under 21 list in 2017.

In 2021, Time named her in its list of 100 emerging leaders who are shaping the future. 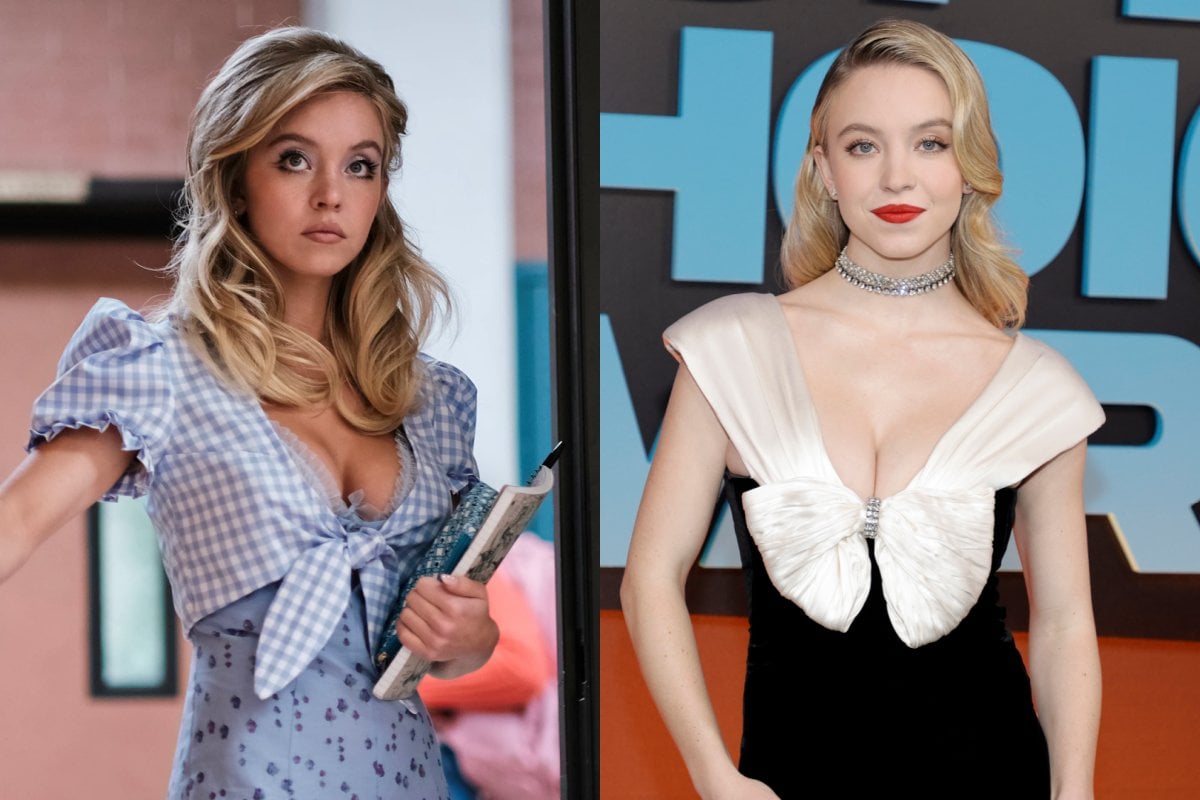 Euphoria is known for pushing boundaries, and it features nudity - including a lot from Cassie. In interviews, Sydney, 24, has spoken about how she has always felt comfortable on set, which has not always been the case during her past jobs.

"There are moments where Cassie was supposed to be shirtless and I would tell Sam, 'I don't really think that's necessary here,'" she told The Independent. He was like, 'Okay, we don't need it.' I've never felt like Sam has pushed it on me or was trying to get a nude scene into an HBO show. When I didn't want to do it, he didn't make me," she said.

"I've had experiences [on other projects] where I want to go home and scrub myself completely raw because I feel so disgusting. I didn't feel comfortable with my cast mate or the crew, and I just didn't feel like my character would be doing it."

Early in her career, Sydney had guest roles in shows including Criminal Minds, 90210, Grey's Anatomy and Pretty Little Liars.

Her big break came in 2018 with a starring role in Netflix series Everything Sucks!. She appeared in The Handmaid's Tale and Sharp Objects that same year before being cast in Euphoria. In 2019, she also appeared in coming-of-age film Big Time Adolescence alongside Pete Davidson, and played a member of the Manson family in Quentin Tarantino's Once Upon a Time in Hollywood.

In 2021, Sydney had another breakout year after she appeared as Olivia Mossbacher in critically acclaimed series The White Lotus.

She has been in a relationship with restaurant owner Jonathan Davies since 2018. 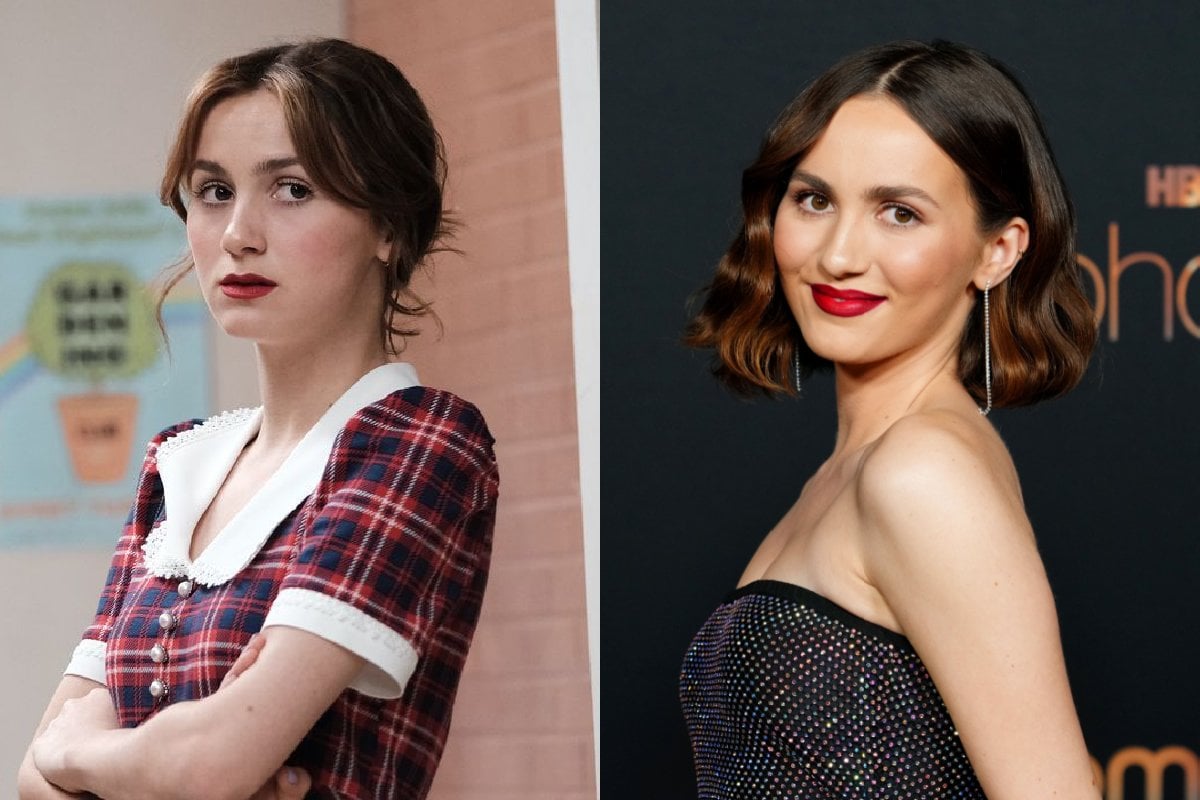 The 24-year-old is the eldest daughter of Judd Apatow and Leslie Mann, whose career began as a child playing the daughter of her mother's characters in her father's films, including Knocked Up, Funny People and This Is 40.

In 2015, she appeared in three episodes of Lena Dunham's series Girls, which was executive produced by her dad.

She appeared in Netflix miniseries Hollywood and Pete Davidson's semi-biographical comedy The King of Staten Island in 2020. 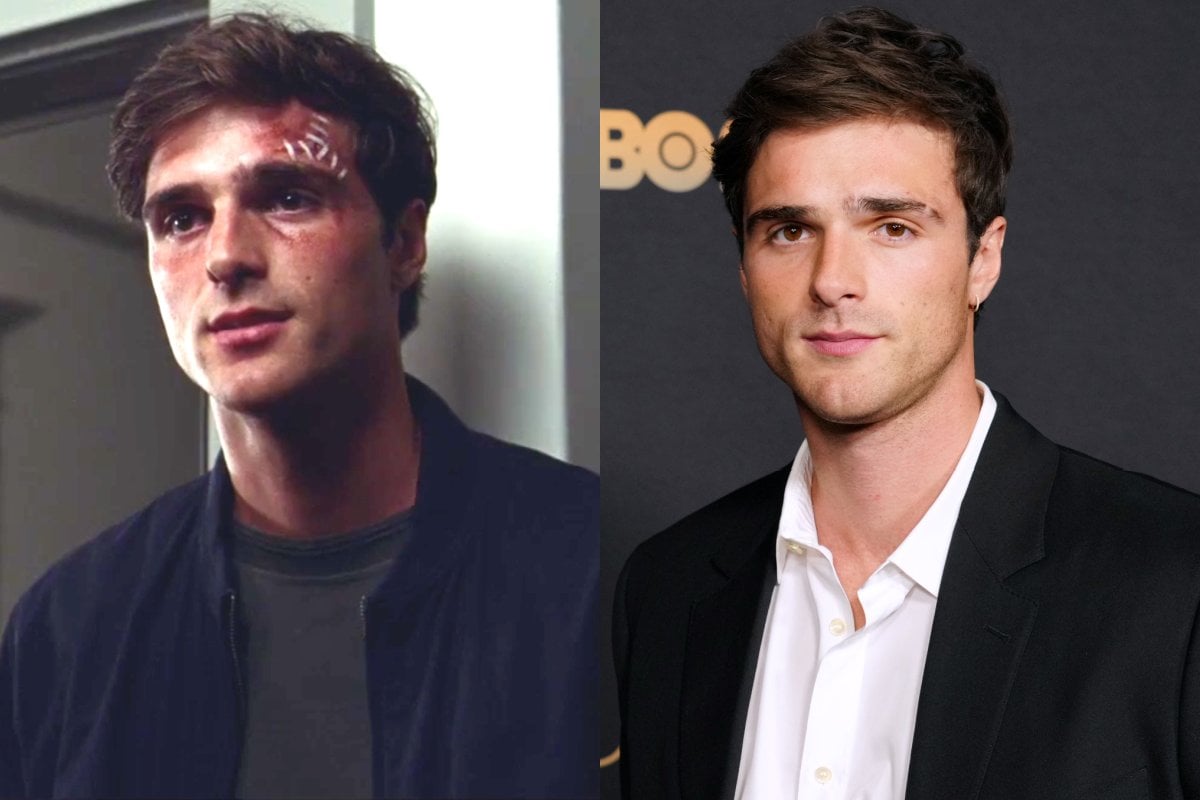 Aussie actor Jacob Elordi stars as violent jock Nate Jacobs, who is struggling with his sexuality and his feelings towards Jules.

Jacob, 24, grew up in Brisbane, and had his first film experience has an extra on the set of Pirates of the Caribbean: Dead Men Tell No Tales. His first actual acting role came in 2018, when he appeared in Swinging Safari, starring Guy Pearce, Kylie Minogue and Asher Keddie.

Jacob dated his Kissing Booth co-star Joey King from 2017 to 2019, and was then linked to Zendaya. He dated Kaia Gerber for 14 months from 2020-2021, and most recently has been linked to YouTuber Olivia Jade Giannulli. 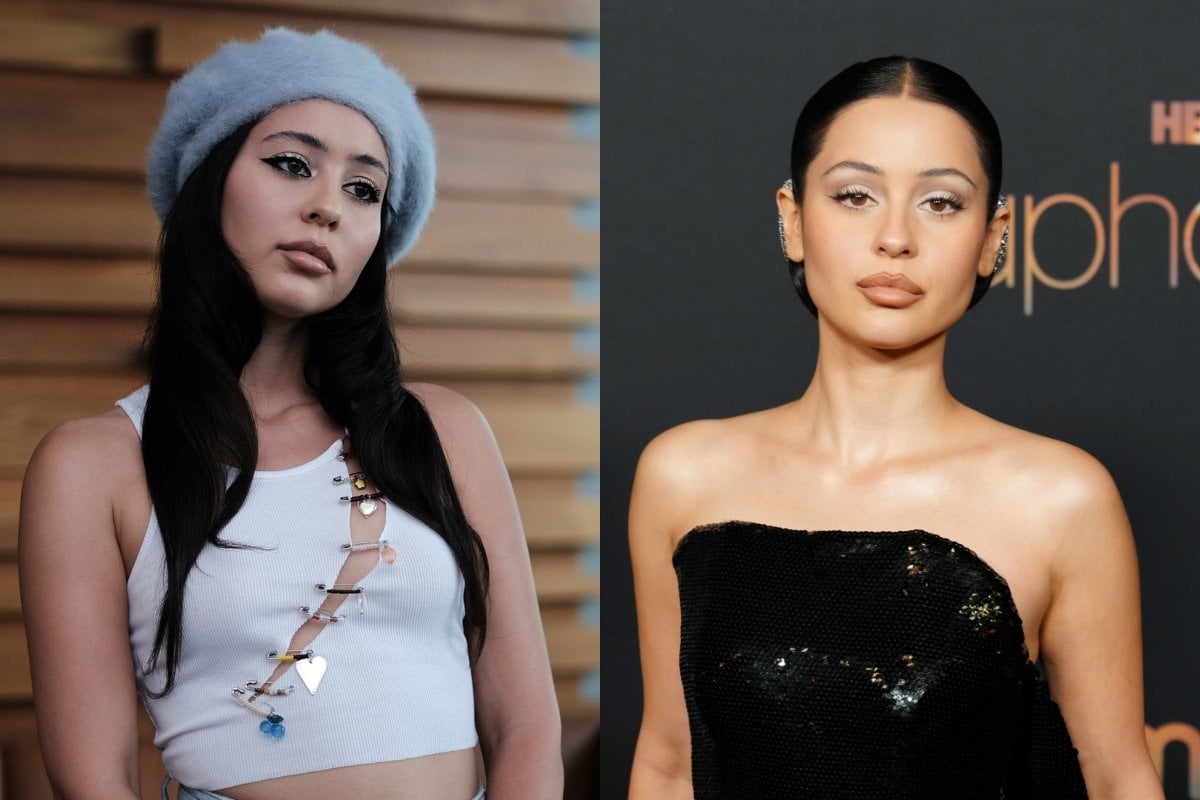 She has starred in movies Mid90s, Waves and Mainstream, and has had guest roles in TV series Ray Donovan, Love and The OA.

In 2019, Alexa was reported to be 24. However, following Euphoria's season one, a yearbook listing her as a high school graduate in 2008 surfaced, revealing she was actually older than that.

Of course, this exploded into a million memes online and has become a bit of a inside joke among Euphoria fans, but Alexa has not addressed the confusion. 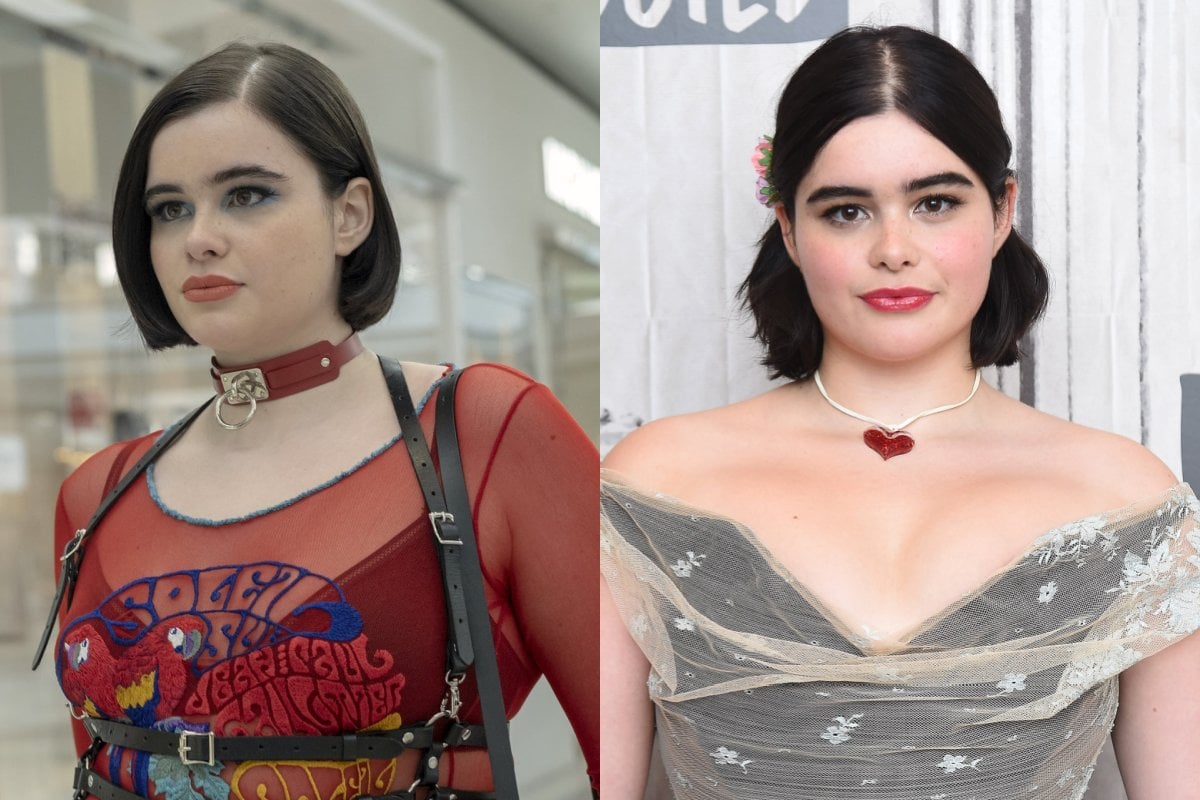 Barbie began her modelling career as a teenager, and has posed for brands including Adidas, ASOS, Forever 21 and H&M. In 2016, unretouched photos from a campaign Barbie filmed with Aerie went viral because of the body positive messaging, leading Barbie to be named among Time's 30 Most Influential Teens list.

Barbie is openly queer and has been in a relationship with musician Elle Puckett since 2019. 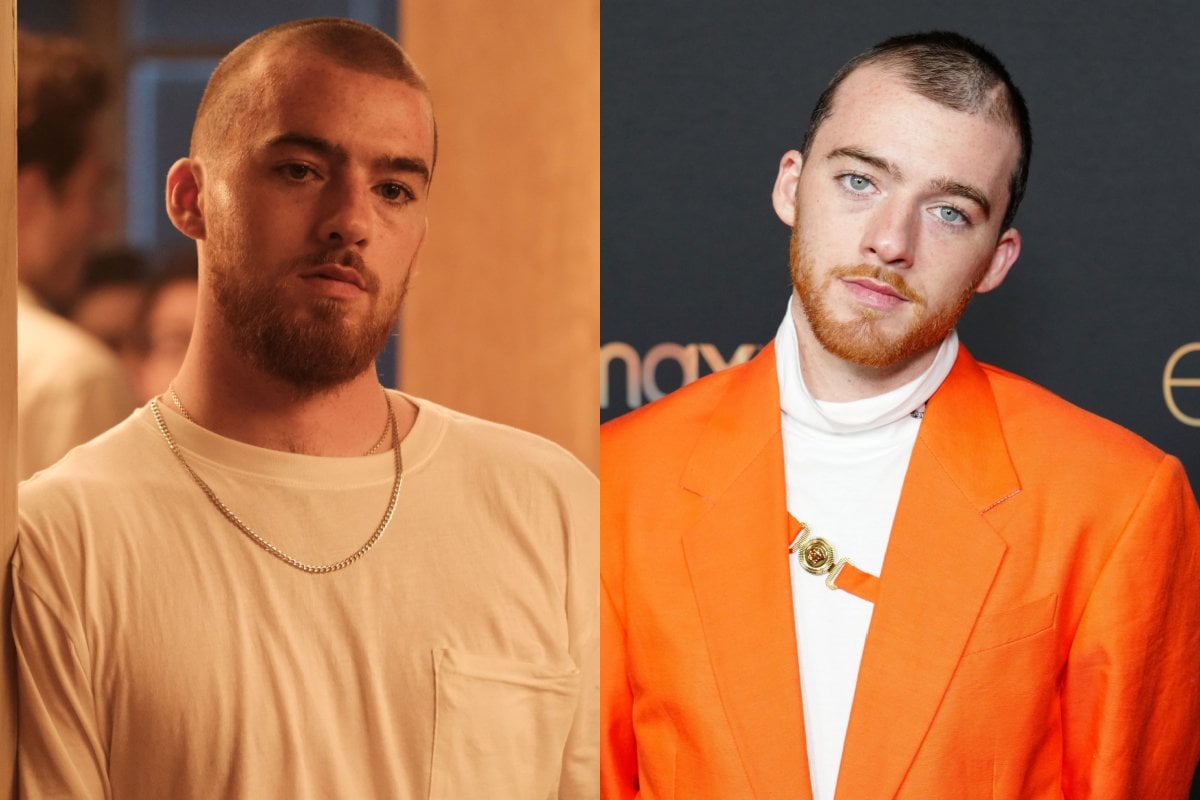 Fan fave Fezco is played by Angus Cloud in his first acting role.

Angus was scouted by a Euphoria casting agent while working at a chicken and waffles restaurant in Brooklyn, New York and originally thought it was a scam.

Since then, he has also appeared in a Noah Cyrus music video and 2021 movie North Hollywood. This year, he will appear in two movies called The Things They Carried and Your Lucky Day. 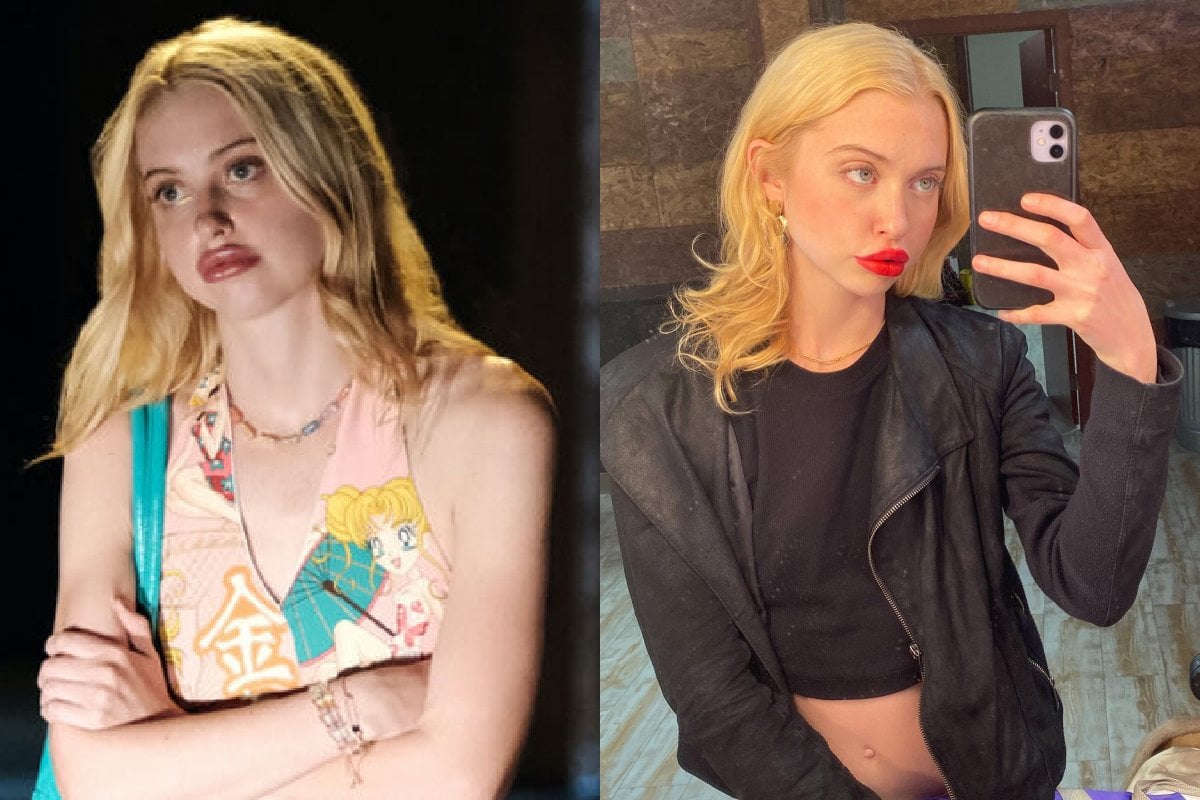 Chloe Cherry is a new addition to the cast in season two, playing drug addict Faye who winds up living with Fezco.

She's on hiatus now, but still has an active OnlyFans.

She believes this experience has helped her transition into television.

"When I was on a Hollywood set for the first time, I was like, 'Holy s**t. I know exactly what I'm doing.' I know how to be on my mark, how to be in the light, how to look at a certain place past the camera, have the timing down and then put my body in a specific position."

She has also recently signed to a modelling agency. 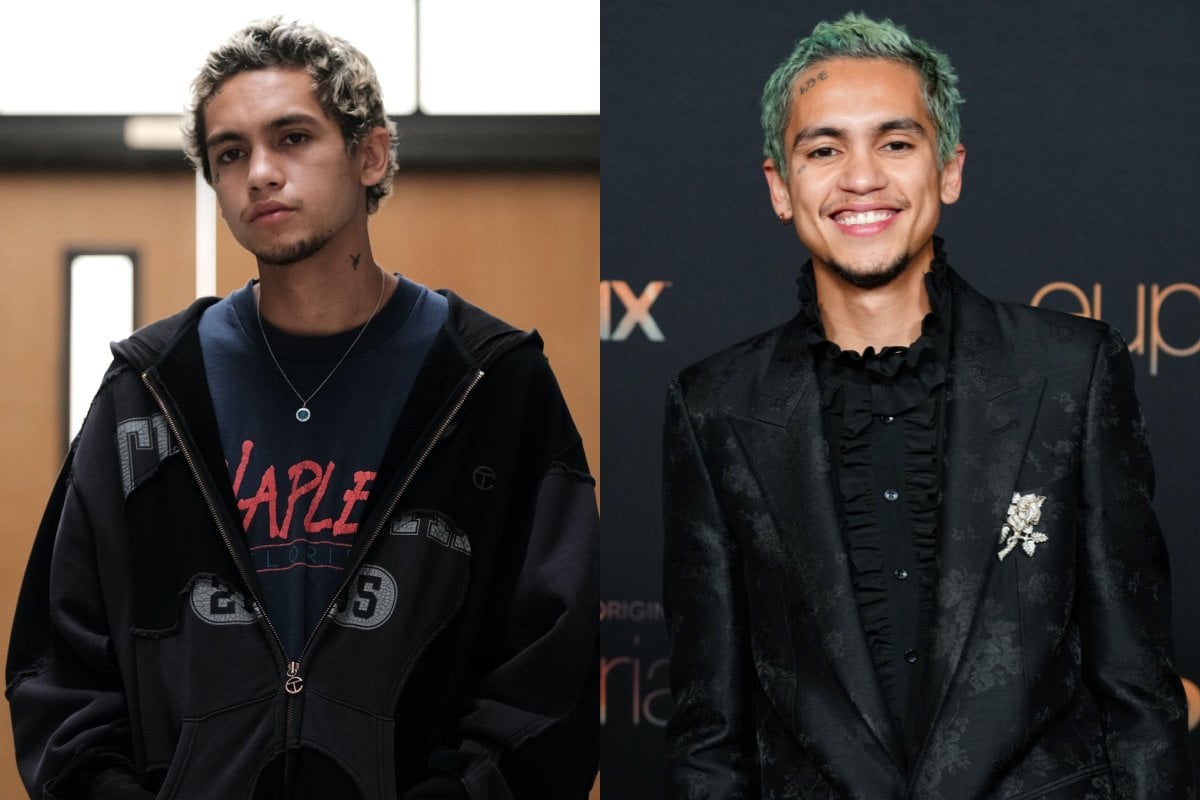 Another Euphoria newbie is Dominic Fike's Elliot, a new friend of Rue's.

Dominic was originally meant to appear in the show's first season, but his character was written out of the show. He was asked to audition for a bigger role in season two, and viola: here he is.

The 26-year-old is a musician who sparked a bidding war between music labels after dropping music to SoundCloud. His first album was released in 2017 and since then, has collaborated with artists like Justin Bieber, Halsey and even Paul McCartney.

Dominic was charged for battery of a police officer in 2016 and spent two months in jail in 2017 for violating his house arrest.

He told Complex the charge was "just a wrong place, wrong time, charge with my brother. It's public information now, it's all right there". 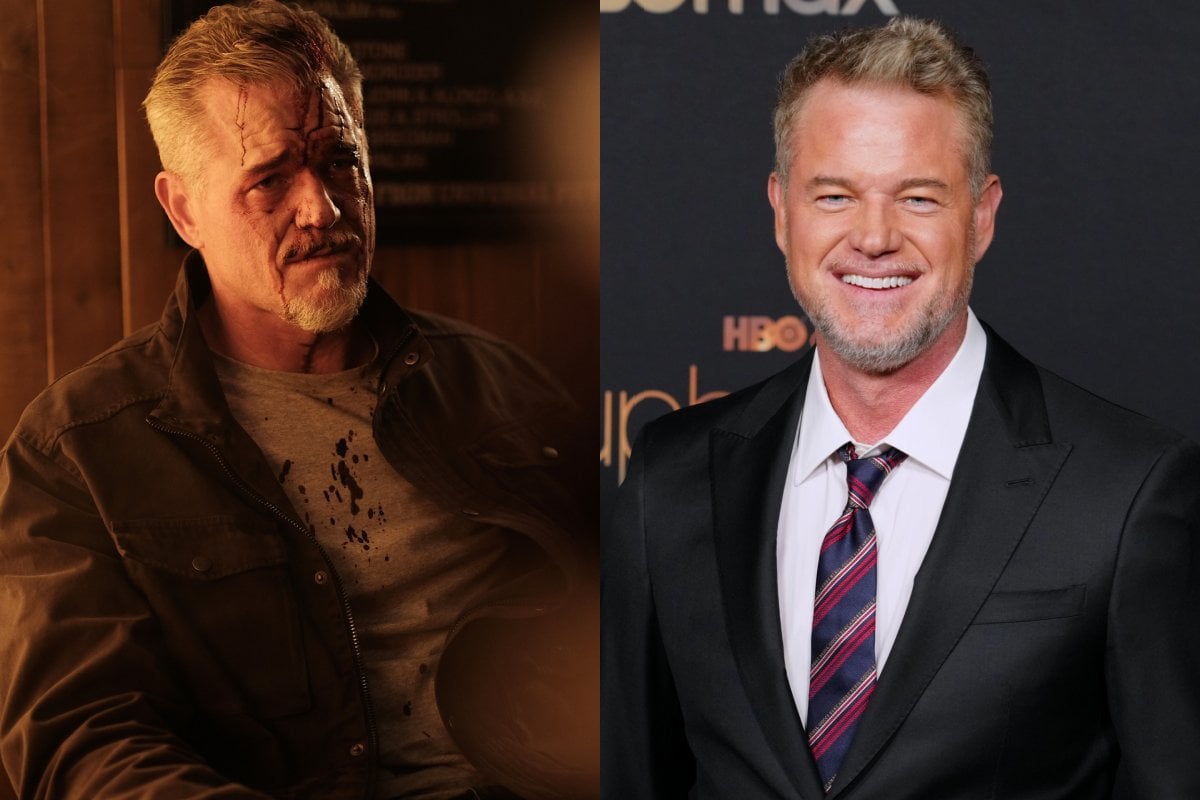 Never in a million years did I think I would see McSteamy, one of my favourite ever Grey's Anatomy characters, eating... actually no, I should not finish that sentence.

On the bright side, Eric Dane's performance as Cal Jacobs in Euphoria has really taken the sting out of McSteamy's death.

Before Grey's, Eric had small television roles in Saved by the Bell, Roseanne and Married... With Children. He appeared in two seasons of Charmed before appearing as Dr Mark Sloan on an episode of Grey's Anatomy in a guest role. The character was so well received that he became a regular.

After Grey's, he had a leading role in the television series The Last Ship. He has also had roles in movies including Marley & Me, Valentines Day and Burlesque.

Eric was married to actress Rebecca Gayheart from 14 years from 2004-2018. They have two daughters together.