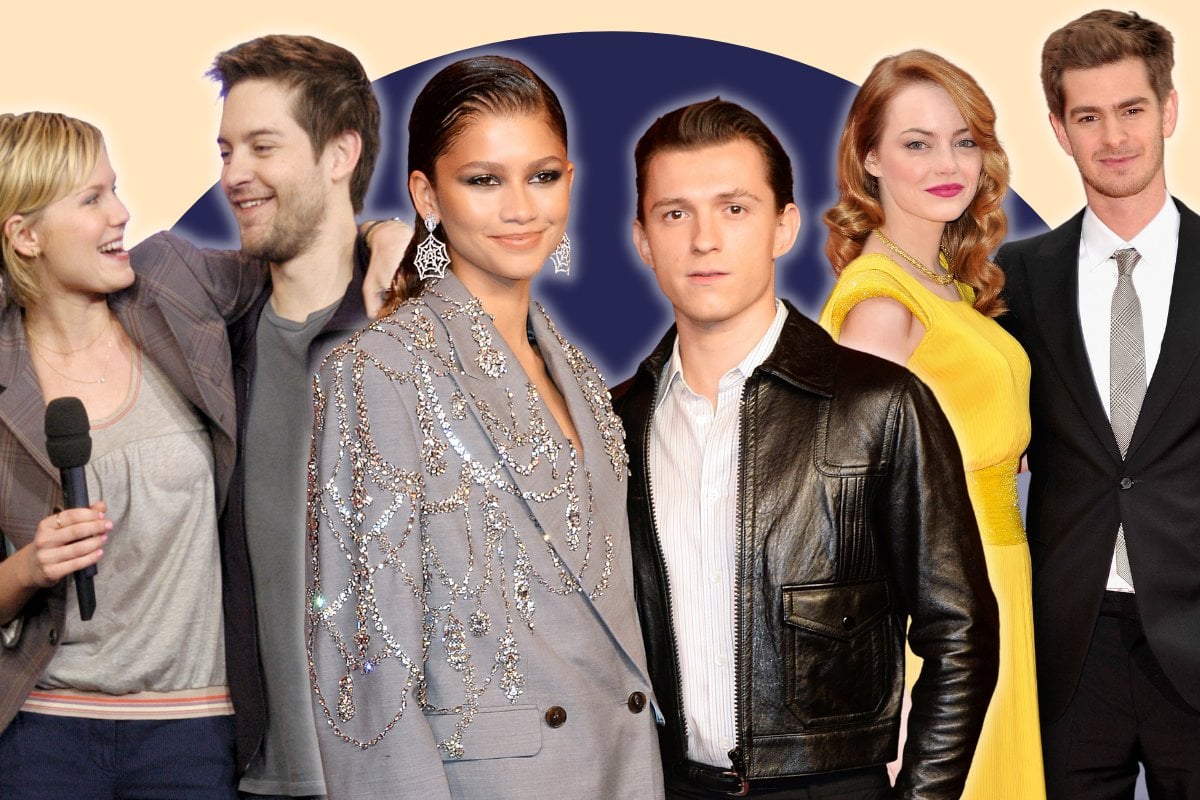 History has a way of repeating itself; Tom Holland and Zendaya have proven it.

When it became public information that he had started dating his Spider-Man co-star, the world erupted. In fact, the couple became a trending topic across a slew of social media sites in record-breaking speed.

What people may have forgotten to mention though is the fact they are not the first, nor the second pair to date from the Spider-Man universe - in fact they follow behind Andrew Garfield and Tobey Maguire who dated their co-stars Emma Stone and Kirsten Dunst.

It's a bizarre fact, and one that has clearly become a tradition - for who is to say the next budding A-lister romance won't stem from the Marvel-based comic? Certainly not us.

Watch the trailer for Spider-Man: No Way Home. Post continues after video.

However, there is a rumour gaining increasing interest and its that these previous relationships were the downfall to each film. Critic reviews slammed Spider-Man 3 (Maguire and Dunst) despite raking in $894.9 US million at the box office. It was the same again for The Amazing Spider-Man film series (Garfield and Stone) which may have earned a neat $709 US million, but didn't quite satisfy their audience.

According to the "curse", their relationships and subsequent break-ups contributed to the dwindling positive responses.

So, is it a well-founded rumour with any standing or is it simple internet fodder?

Holland and Zendaya met on the set of Spider-Man: Homecoming and allegedly got along straight off the bat. Not too soon after, dating rumours swirled around the pair who have been determined to keep all the details of their relationship private, since 2016.

"I’ve always been really adamant to keep my private life private because I share so much of my life with the world anyway," Holland explained to GQ in November. "We sort of felt robbed of our privacy. I don’t think it’s about not being ready — it’s just that we didn’t want to [talk about it]."

He continued: "This isn’t my story; it’s our story. And we’ll talk about what it is when we’re ready to talk about it together."

They're not the only pair to date though, as Andrew Garfield and Emma Stone from The Amazing Spider-Man film series met on the set as well and were together not too long after.

The same can be said for Tobey Maguire and Kirsten Dunst who both acted alongside each other in the Spider-Man franchise.

In fact, Holland and Zendaya were even warned not to begin a relationship while working together, according to Amy Pascal - who worked on the last five Spiderman films as an executive producer and was adamant on breaking the dating chain that somehow had become a pattern for the Spider-Men actors.

"I took Tom and Zendaya aside, separately, when we first cast them and gave them a lecture: 'Don’t go there — just don’t. Try not to,'" she told the NYT. "I gave the same advice to Andrew and Emma. It can just complicate things, you know? And they all ignored me."

Garfield and Stone quickly began a relationship while filming for The Amazing Spider-Man in 2011.

In his own words, it was an "instant connection".

"We got on really well as people, in between [takes]," he told MTV in 2012. "That was the fun stuff: In between, we’d just mess around, and I felt, ‘Ah, this is different.’ I wasn’t really aware what was happening in the screen test. She keeps you on your toes, and that wakes you up. That was the beginning."

In an interview with Teen Vogue, Garfield recalled being taken aback by Stone when they met at her audition. “It was like I woke up when she came in… It was like diving into white-water rapids and having no desire to hang onto the side. Throughout shooting, it was wild and exciting,” he said. 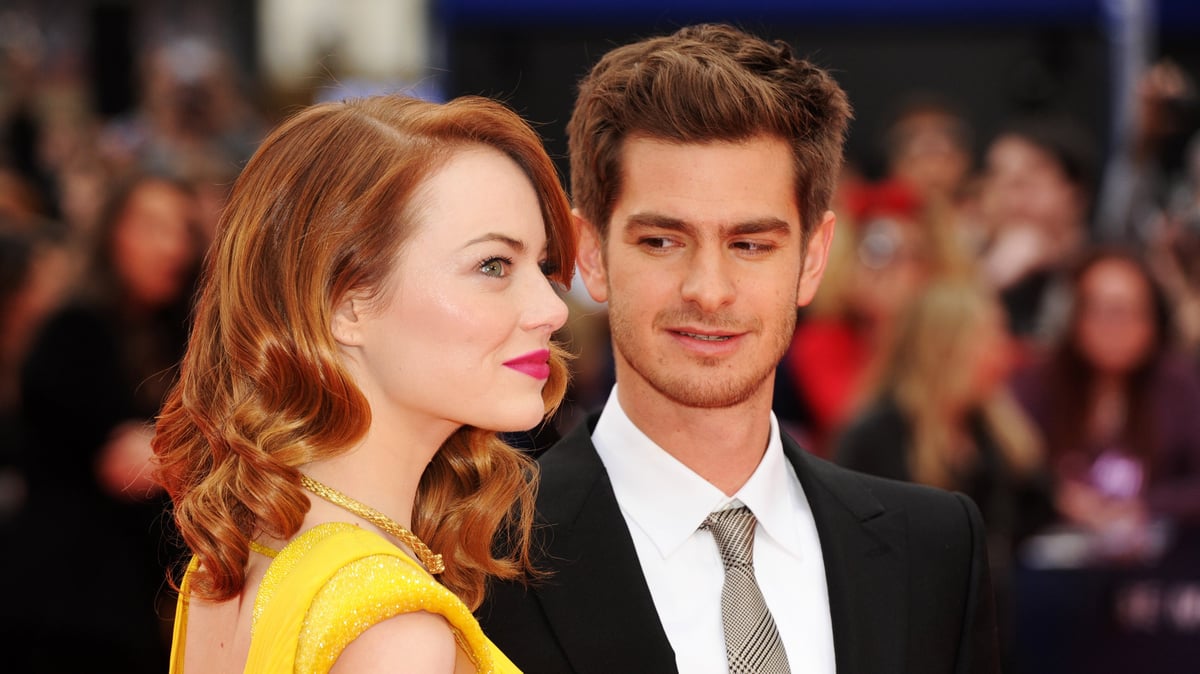 The pair dated for four years, before breaking up in 2015.

In October of that year, an insider told U.S. Weekly: "They still have a lot of love for one another and they are on good terms with each another and remain close. It just wasn’t working."

Another source also told PEOPLE they had ended their relationship on great terms, and still remained friends.

In an interview with Variety earlier this year, he admitted looking back at his time on The Amazing Spider-Man franchise with Stone was a "beautiful thing".

"It was only beautiful," he explained. "I got to meet Emma [Stone] and work with her and Sally Field."

"So, for me it’s been bliss to be able to watch her success and watch her bloom into the actress she is."

He continued: "We care about each other so much, and that’s a given, that’s kind of this unconditional thing. There’s so much love between us and so much respect… It’s also been wonderful to have that kind of support for each other. It’s nothing but a beautiful thing."

Maguire and Dunst began a relationship while they were filming for the first Spider-Man film trilogy in 2001 - where they played the roles of Spider-Man/Peter Parker and his love-interest Mary Jane Watson.

Actor James Franco, who also starred in the film as the character Harry Osborn, confirmed the relationship and even admitted to a brief rivalry between him and Maguire.

"Tobey and Kirsten became a couple around that time," he explained to Playboy in 2013. "I had a crush on Kirsten, and I think I was upset about that as well… Tobey was mad at me for a while. By the second film, we were cool." 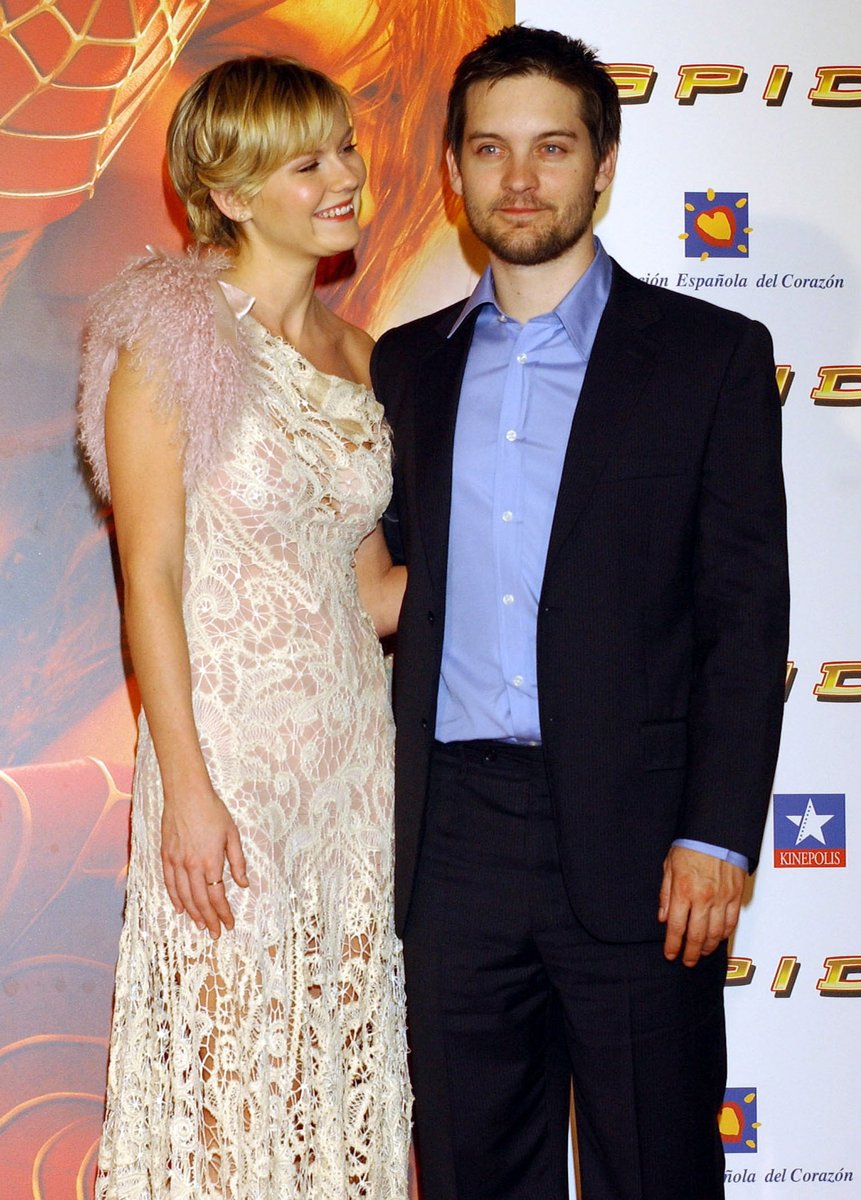 Kirsten Dunst and Tobey Maguire at the Spider-Man 2 Madrid Premiere in 2004. Image: Getty.

By 2002 though, the pair had split. While they never publicly discussed their relationship or break-up, there were rumours it called have been due to the pay disparity between Maguire and Dunst.

In 2021, the actor told The Independent that the massive pay gap made her re-think her entire role in the Spider-Man franchise.

"The pay disparity between me and Spider-Man was very extreme," she explained. "I didn’t even think about it. I was just like, ‘Oh yeah, Tobey is playing Spider-Man.’ But you know who was on the cover of the second Spider-Man poster? Spider-Man and me."

Sam Raimi, the director of the franchise, even admitted to having "worries about [their] break-up".

"They eventually broke up before the second movie," he told the Sydney Morning Herald. "I was concerned they wouldn’t get the same chemistry back, but it was just me worrying.

"They really like each other, I think, very much. And that relationship probably just added to their ability to trust each other."

The Spider-Man curse is yet to be proven a fact, and considering Tom Holland and Zendaya seem to still be going strong - the destiny for the franchise is yet to be determined.

Reply
Upvote
I just don't understand why we need so many Spider Man adaptations. Tom Holland is the third actor to play him in less than twenty years. Aren't there any other stories that could be turned into film franchises.
L
lisa 8 months ago