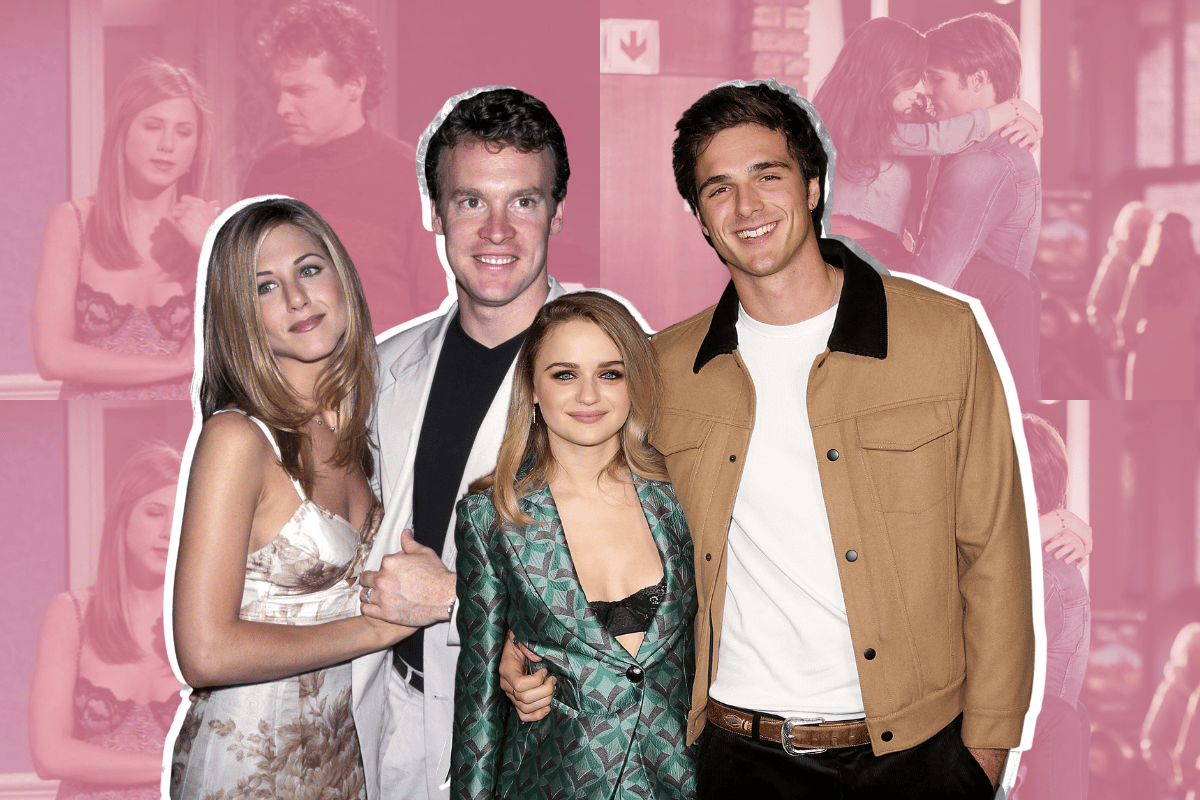 It's not hard to see how actors fall in love on set.

From the long hours, to the on-set chemistry (and the occasional romance rumours) it's no surprise that sparks start flying.

But when things go south and couples break up during filming, things can get a little... tricky.

Especially when they still have to play lovers on the show or worse film *intimate* scenes together.

But despite the awkwardness, some actors have managed to make it work.

From Joey King and Jacob Elordi, to Kaley Cuoco and Johnny Galecki, here are 16 actors who had to work with their ex on set. 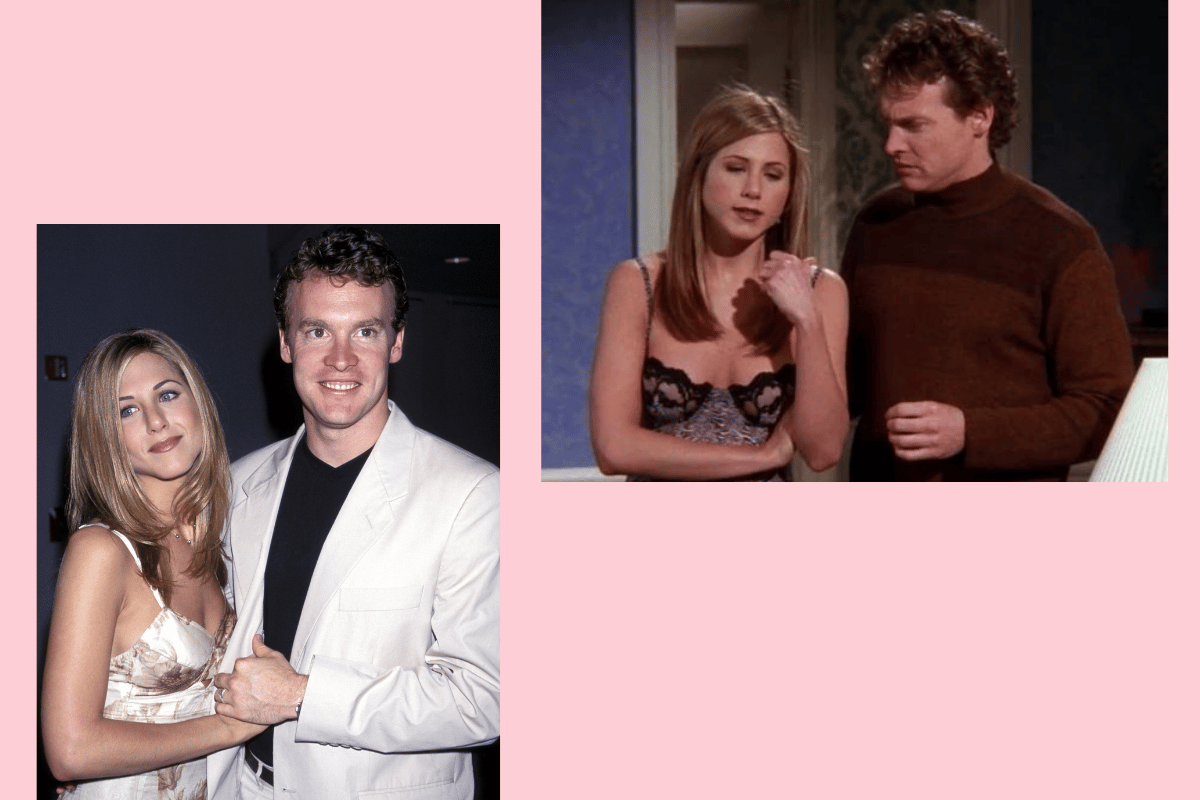 Friends fans will remember Rachel had a pretty big crush on Joshua, played by Tate Donovan, in season four.

Well, it turns out there was a reason Joshua was only in the show for a handful of episodes. In real life, Jennifer Aniston and Tate Donovan, who had been together for two years, were going through a pretty "tough" breakup.

Speaking about his brief stint on Friends, Donovan told US Weekly, "I was just happy to be on the team. The only bummer was Jennifer and I were breaking up at the time."

"And so that was tricky to sort of act, and act like we are just meeting each other, and falling in love, or whatever, interested in each other, when we’re sort of breaking up. That was just tough."

"It was just six episodes," he added. "I mean, only because we were breaking up. We were like, ‘Hey, can we not keep doing this?' Cause this is really painful and tough."

But despite the unfavourable situation, Donovan said the rest of cast were really "compassionate" about the breakup.

"It was really ultimately a great experience of how people can treat you really well, and you still do your job even though you’re sort of dying inside."

Joey King and Jacob Elordi in The Kissing Booth sequels. 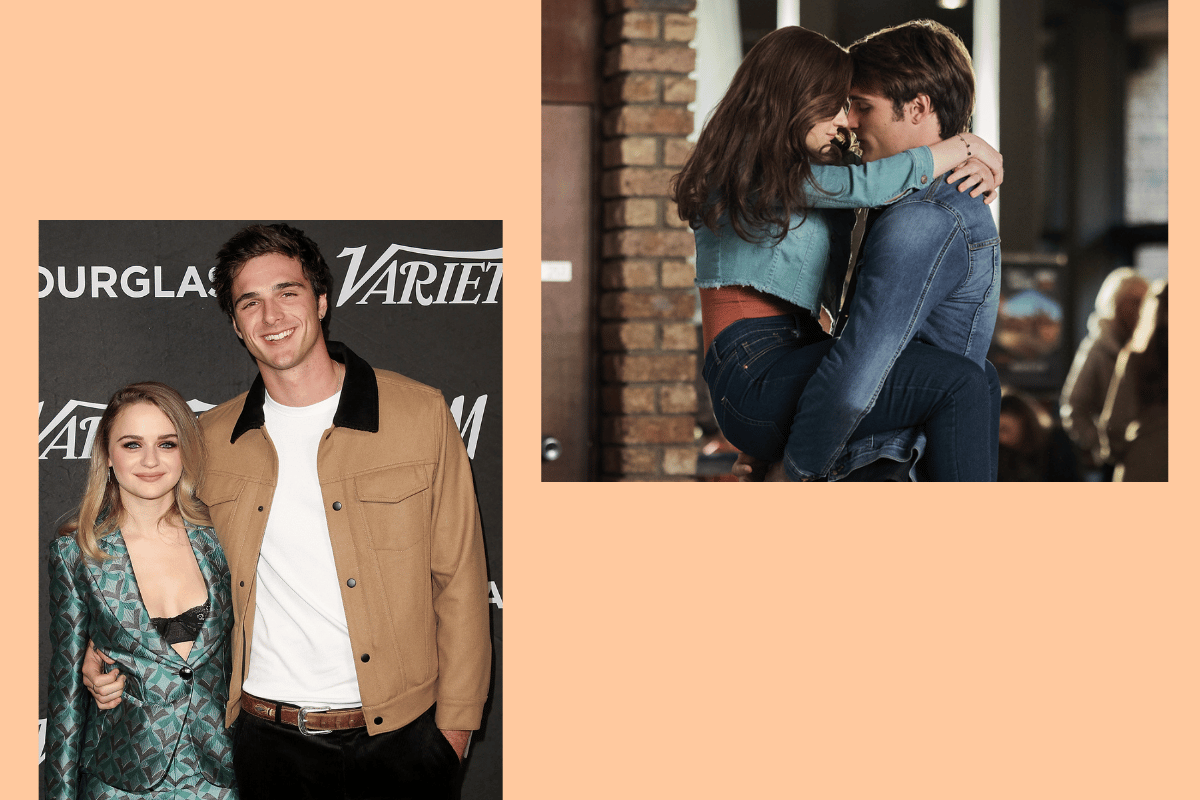 Joey King and Jacob Elordi played love interests not once, but twice in both The Kissing Booth sequels, after splitting up.

The pair first met and fell in love back in 2017 on the set of the original movie, before they quietly called it quits in 2018.

When asked on The Howard Stern Show in 2020 if she'd ever date another actor again, King said, "No. I couldn’t."

"I think that it’s awesome to date someone in your field, who gets it, but doing the same exact thing as somebody is tough. It’s really tough."

That year, she also told Cosmopolitan that it wasn't easy to pretend to still be dating in front of the camera.

"No one's thinking to themselves, 'That was easy,' because it wasn't," she told the publication.

"I'm sure people will analyse every movement and every detail. And you know what? Let them. But at the end of the day, I was just thrilled to be Elle Evans again. Elle Evans needs her Noah Flynn, and whatever that means for my personal life, I'll do anything to make sure the story of my character who I care about so much is complete."

Laura Dern and Kyle MacLachlan on Twin Peaks: The Return. 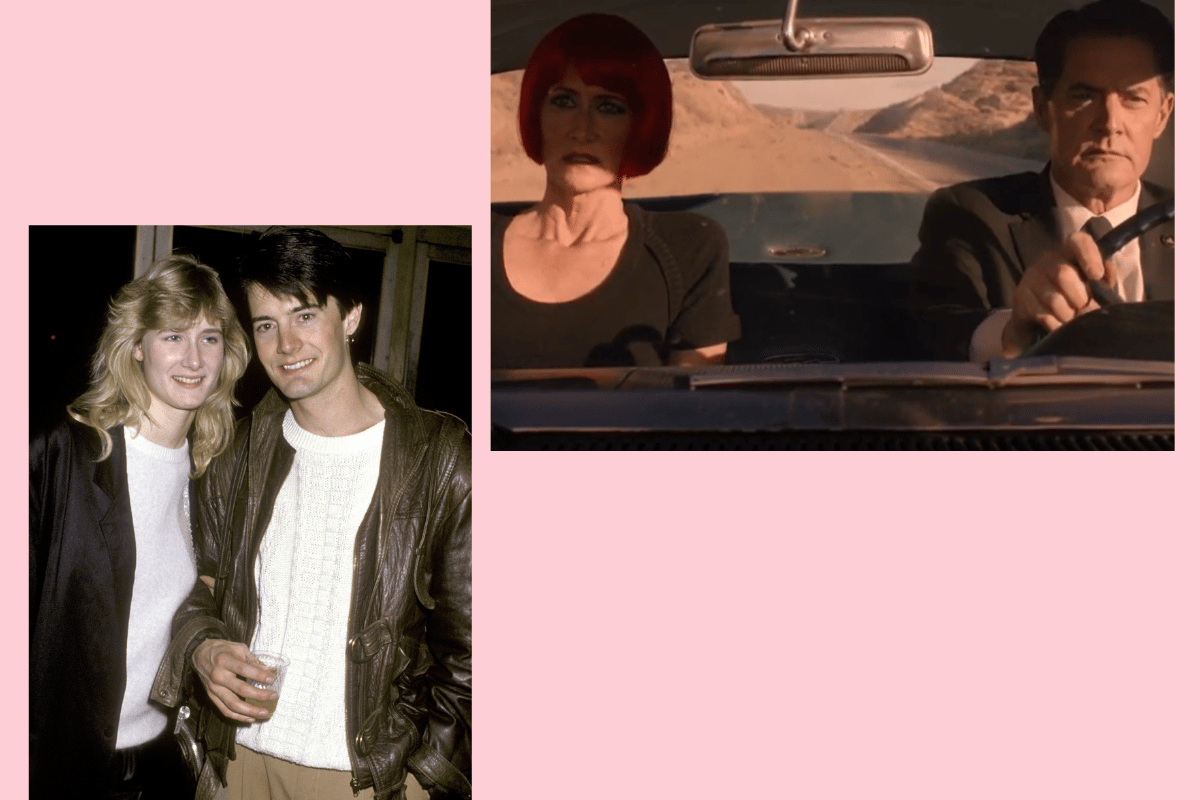 If working with your ex wasn't awkward enough, Laura Dern found herself having to film a sex scene with her ex-boyfriend, Kyle MacLachlan.

The pair, who had split over 20 years ago, reunited in 2017 to film the TV series Twin Peaks: The Return.

"We had this scene that we had to do together, we both knew going in, which was going to require some nakedness on both our parts," MacLachlan explained on The Ellen DeGeneres Show.

"It's very funny because [director David Lynch] would sit down and say, 'Okay, this is what we're gonna do.' He talks you through it, so you feel pretty comfortable," he continued.

"And then you sit down, and Laura and I were kind of like, 'Okay, here we go.' Welcome back, 25 years later... Yeah, it was weird. We had a couple of laughs for sure."

Kaley Cuoco and Johnny Galecki on The Big Bang Theory. 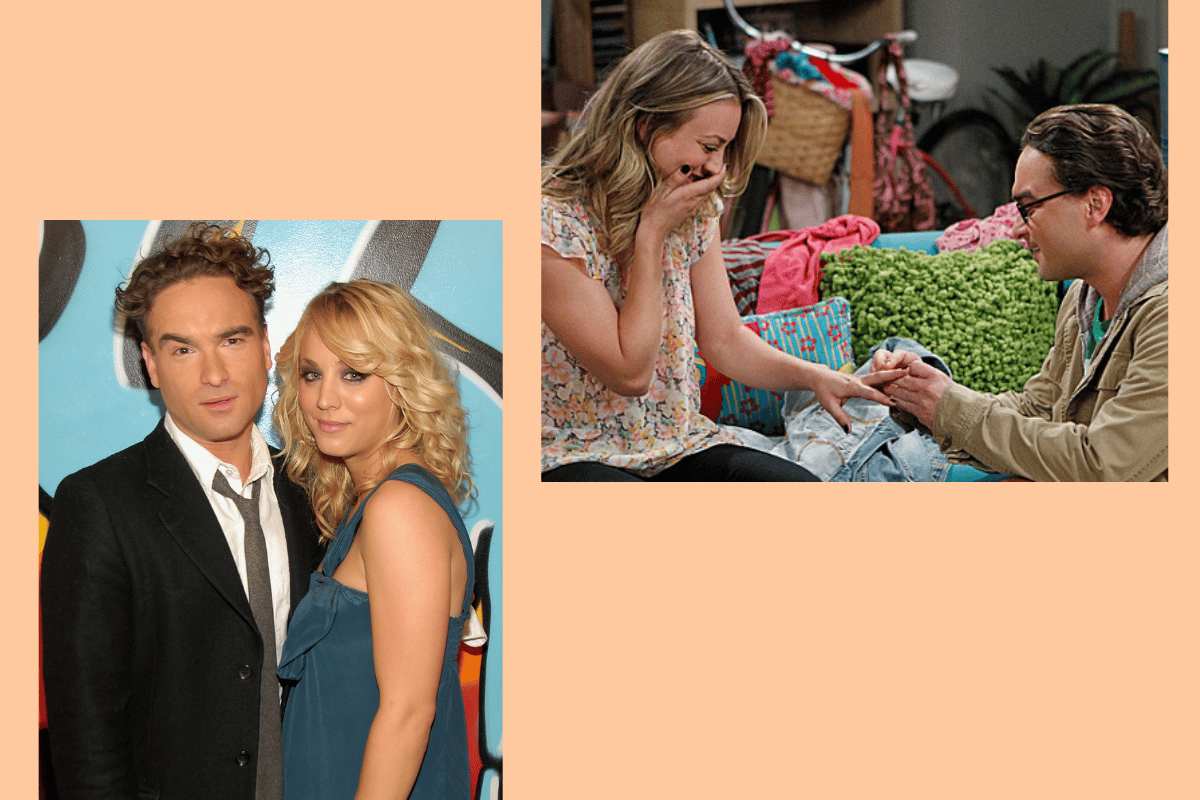 Speaking of *intimate* scenes, Kaley Cuoco said it felt like her and Johnny Galecki's character were "sleeping together every other second" on The Big Bang Theory after they broke up.

The actors were reportedly dating in real life from 2007 to 2009, but they kept their relationship under wraps while playing on-screen lovers on the show.

"We got together and just fell mad for each other for two years, but then we broke up. Luckily, Johnny and I came out of it so brilliantly and we’re closer today than we ever were," Cuoco told Dax Shepard on his podcast, Armchair Expert.

"When we broke up, obviously it was a little sensitive for a minute. But I remember those weeks that Chuck had written these episodes where all of a sudden our characters were like sleeping together every other second. And Johnny and I would talk, I’m like, ‘No but I think he did that on purpose.’ 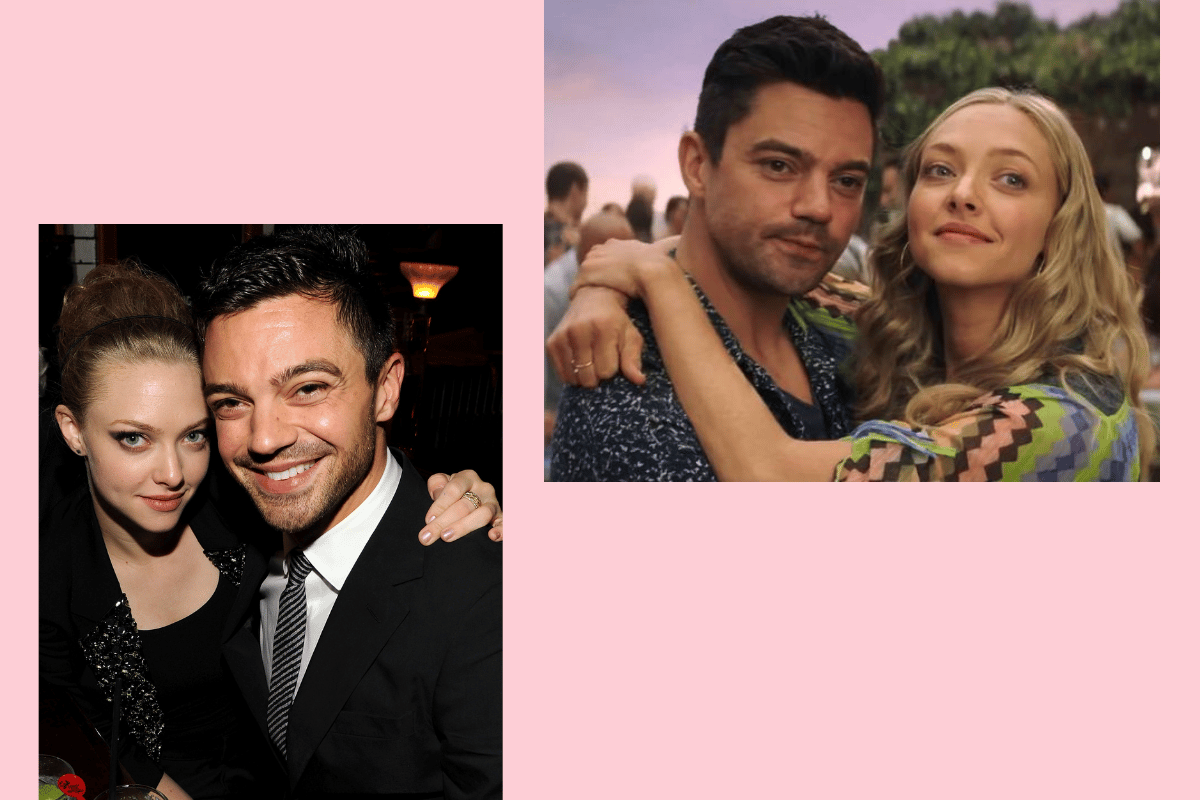 Amanda Seyfried and Dominic Cooper fell in love while playing on-screen lovebirds, Sky and Sophie, in the 2008 film Mamma Mia!

However, by the time the film's sequel, Mamma Mia! Here We Go Again, rolled around years later, the pair had well and truly gone their separate ways.

At the time, Seyfried's husband, Thomas Sadoski, wasn't exactly over the moon when his wife had to play lovers with her ex-boyfriend again.

"I think he has the same kind of issues that I would have if we were hanging out with his ex-girlfriend from long ago," she told The Mirror.

"I’d rather he be jealous than completely fine with it. He’s been great. He’s very supportive, and he loves this movie." 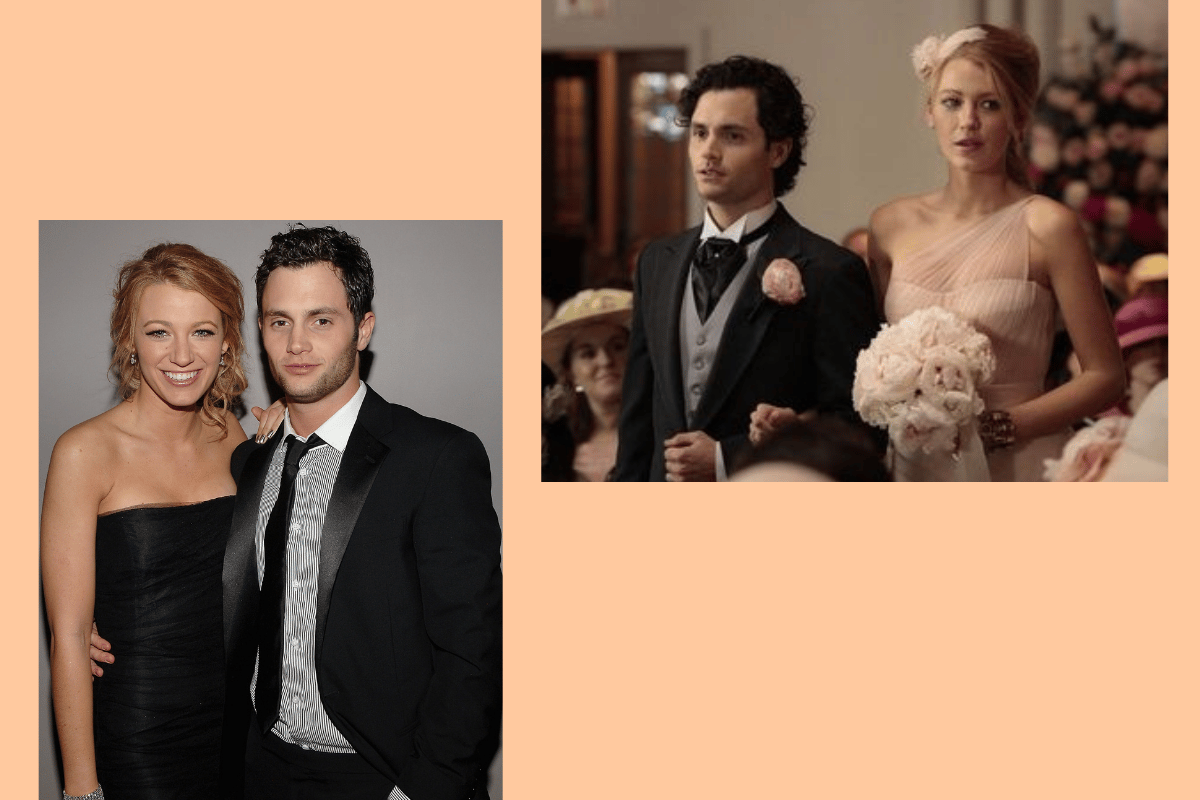 Unlike their characters on Gossip Girl, Blake Lively and Penn Badgley's relationship was never meant to be.

The actors first went public with their relationship in 2008, before announcing their breakup two years later in October 2010.

At the time, the show’s executive producer, Joshua Safran, said the actors kept their breakup a secret on the set.

"The shocking thing was, I found out on the set of the season two finale that Blake and Penn had broken up months before," he said, according to Vanity Fair.

"They kept the breakup hidden from the crew, which you could never do now. I don’t even know how they did it. They kept it from everybody which is a testament to how good they are as actors."

Two years after their breakup, the actors played newlyweds when they got married on the show.

Badgley later spoke about his experience working with Lively, when he was asked who his best and worst on-screen kiss was on Watch What Happens Live.

"I'll say Blake [Lively] because we actually had a relationship at the time," he said of the best kiss.

"And then the worst, maybe Blake after we broke up."

The You actor also pointed out that he and Lively were "consummately professional" while filming.

"I think we should both pat ourselves on the back for getting [through it]," he said. "We handled it." 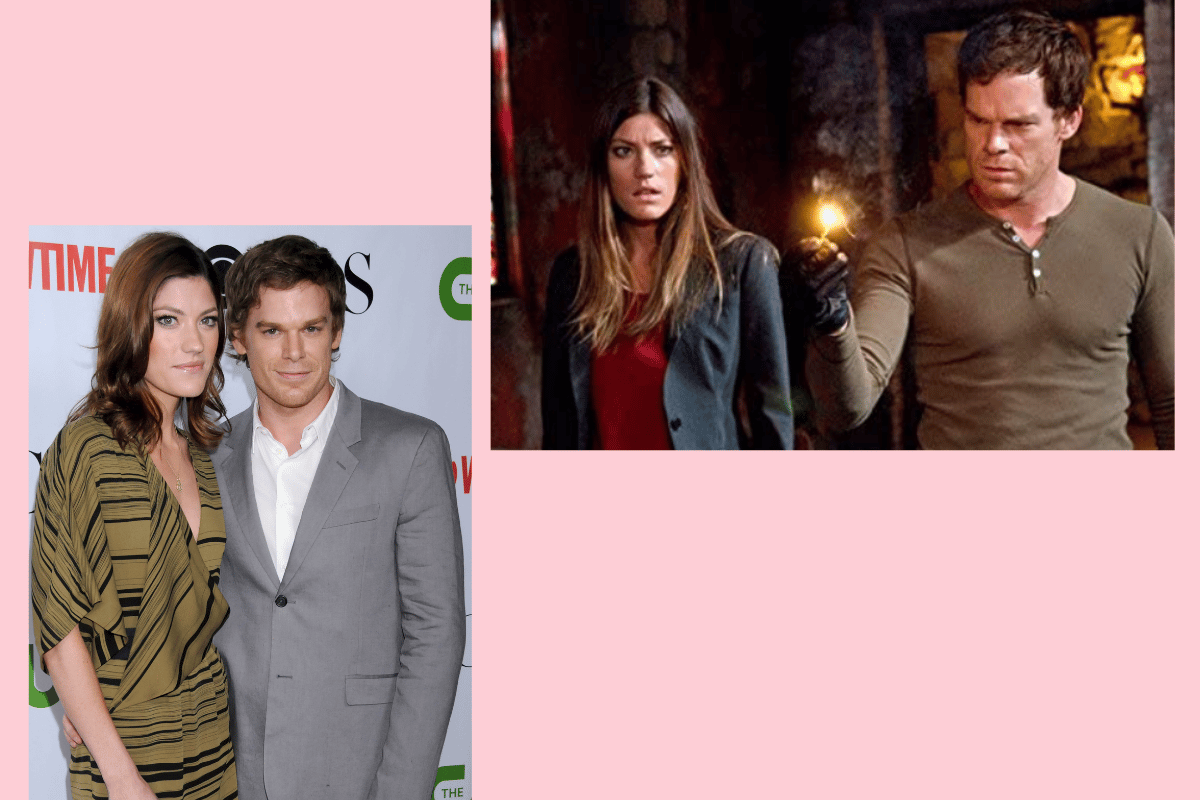 Jennifer Carpenter and Michael C. Hall got married and divorced while filming the TV series Dexter.

The couple met on the set of the show in 2006, before tying the knot two years later. Unfortunately, the pair separated in 2010 but continued to work together for another three years until the show came to an end in 2013.

Speaking about their relationship that year, Carpenter said, "Our marriage didn’t look like anyone else’s, and our divorce didn’t either."

"I said it before, just because the marriage ended doesn’t mean the love did," she shared at a panel at PaleyFest.

"I’m crying. It’s an awkward thing to talk about your personal life in front of a bunch of strangers, but there’s nothing but love and respect [between us]. Nothing."

Hall agreed and said their ability to work together after their divorce was "gratifying".

"I would say the fact that Jennifer and I worked through whatever was going on with us personally the way we did and maintained telling the story was never in question," he said. "It was always what we needed or wanted to do."

Nina Dobrev and Ian Somerhalder on The Vampire Diaries. 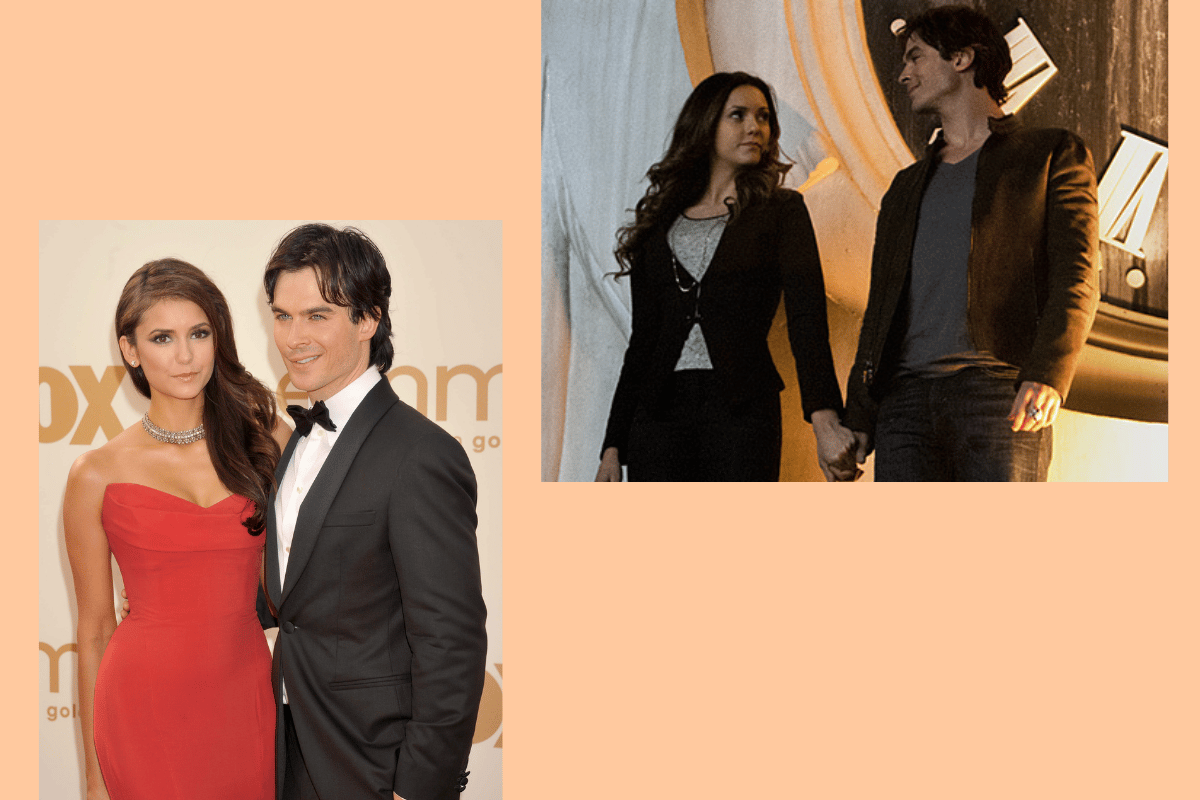 Nina Dobrev and Ian Somerhalder started dating back in 2010 while playing on-screen love interests Damon and Elena on hit series The Vampire Diaries.

"I didn’t want to be dating one of my costars — my goal on the show was to be professional," Dobrev told Seventeen in 2012.

"But sometimes you can’t help who you have a connection with, and you can only fight it for so long — which I did for a really, really long time."

The pair later split in 2013 but continued to work together until Dobrev left the show in 2015. She later returned for the season finale in 2017.

Now the actors, including Somerhalder's wife, Nikki Reed, are all friends.

"I don't think [our friendship is] weird at all," Dobrev said on Watch What Happens Live in 2019. "I think that's great. I think, 'Why can't everyone be friends?'"