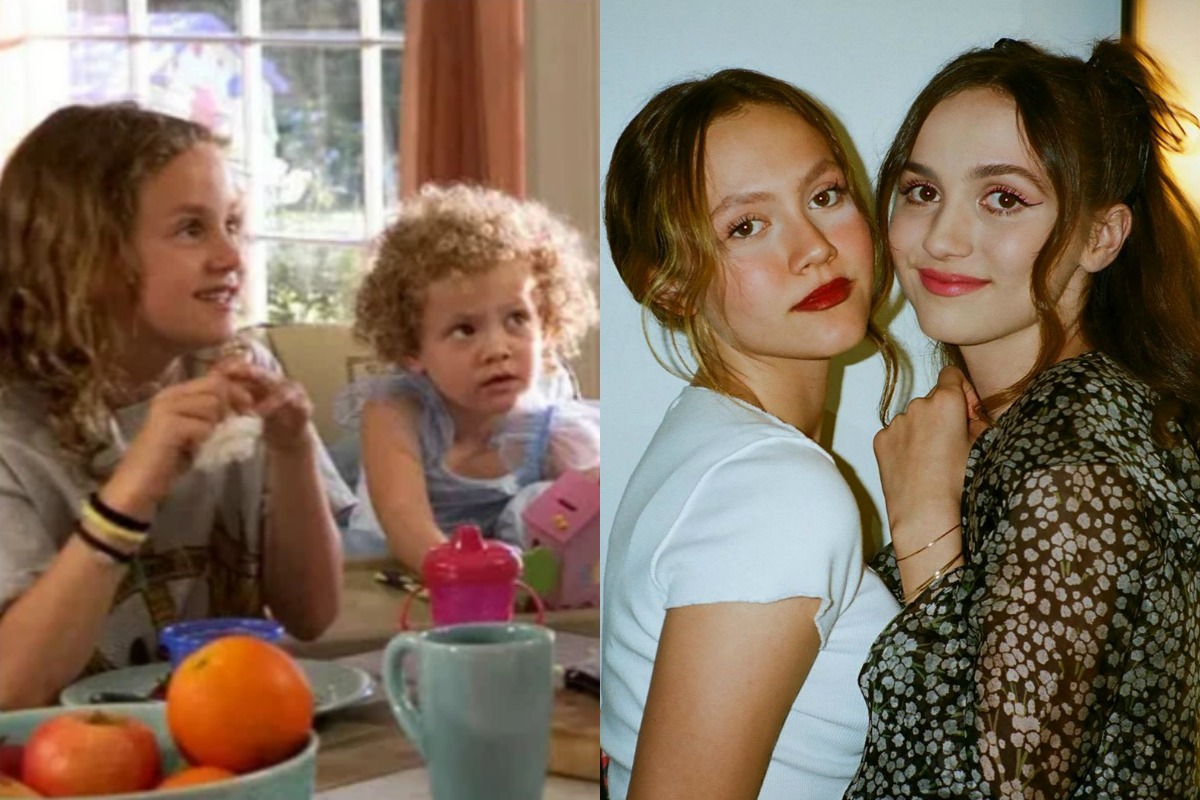 In 2007, we watched Maude and Iris Apatow make their on-screen debut in Knocked Up, before reprising their roles again in the 2012 film, This is 40.

Playing the brutally astute, Sadie and Charlotte, their involvement in the film was a family affair in more ways than one.

Not only was the classic comedy directed by their dad, Judd Apatow, playing their on-screen mum, was their real-life mother, Leslie Mann.

Watch Maude and Iris Apatow steal the scene in Knocked Up. Post continues below.

Now, if you’re wondering why their last names seem so familiar, let us explain.

Their dad is the Emmy Award-winning producer and director behind smash films like Superbad, Forgetting Sarah Marshall, Bridesmaids and The Big Sick, and was also instrumental in crafting Lena Dunham’s hit series, Girls. Mann, on the other hand, is one of Hollywood’s most recognisable actresses, having starred in films like The Bling Ring, How to Be Single and Rio as the voice of Linda Gunderson.

Now, 13 years on from Knocked Up, it's no surprise Maude and Iris, now 22 and 17 respectively, are rising stars in their own right.

From crafting blockbuster acting resumes to rubbing shoulders with celebrities, and owning what can only be described as aggressively cool Instagrams, this is what the sisters are up to now.

You're going to want to remember this face, because Maude could very well be the Natalie Portman, Jennifer Lawrence, or Uma Thurman of her generation.

Not only did she star as Lexi Howard in the controversial hit HBO series, Euphoria, she also appeared in Girls, Pitch Perfect 2, and Assassination Nation alongside Odessa Young, Suki Waterhouse, Hari Nef and Bella Thorne.

More recently, she's appeared in TV mini series Hollywood and comedy film The King of Staten Island, where she worked alongside her father again.

"I know my dad's seen everything I've done. My dad makes self-tapes of me sometimes. I really trust him to tell me if what I'm doing is not working and know that he has a good idea of what I'm capable of," she said.

The prolific Gen Z-er has also written widely for Zooey Deschanel's online publication Hello Giggles, and counts Lena Dunham as one of her friends.

Speaking to Bustle in 2018, the Girls creator had only glowing things to say about the young actress.

"Maude is an exceptionally intelligent, sensitive and amusing person. She’s deeply perceptive in the way she approaches her work as an actor, natural and intuitive, and that extends to her emerging work as a writer and director," she said.

"Simply put, I adore her and am lucky to have been in her life since she was 11."

Beefing up her wunderkind, millennial credentials, 2013 Time Magazine even dubbed her Twitter account as one of the "Best Twitter Feeds of 2013" stating that it is "funny as it is earnest".

To be honest, we didn't even know that was a thing.

Only goes to the library for the scene

Iris might only be 17 years old, but we're predicting big things for this teenager.

You might recognise her in the Netflix series Love, which stars Gillian Jacobs, and Paul Rust. The romantic comedy was created by their dad, and Iris had a recurring role as Arya Hopkins, the wise-beyond-her-years child star who provides council to Gus, her geeky, love-stricken tutor.

Speaking to the Independent about his daughter's acting abilities he said: "I thought she was really funny, she's a good actress".

While he might be biased, fans of the show will agree.

The teenager also has an undeniable knack for wearing, and pulling off blue eyeshadow, in a way that makes us want a refund on our entire adolescence, because we didn't think anybody could look good in the frosty hue?

This article was originally published on October 2019, and was updated on August 26, 2020.