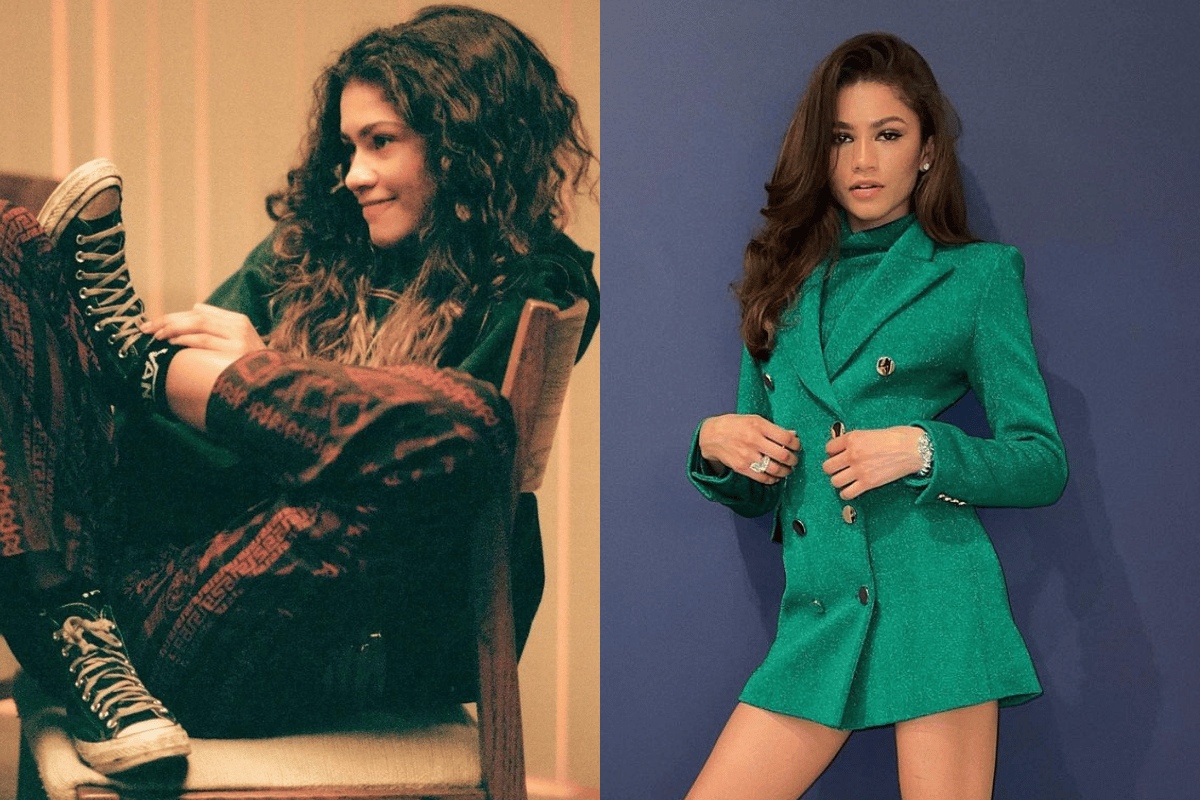 Zendaya, in all her glory, has been at the forefront of media and tabloids for the better part of a decade.

We've seen her play the anxiety-ridden brainiac on Disney Channel, then the badass spy on K.C. Undercover, and eventually as the star of one of Marvel's biggest film franchises: Spiderman.

Of course there's been numerous projects she's undergone and one of her most relatable and notable to date is none other than Euphoria, where she plays teen addict Rue.

In 2020, she won an Emmy Award for it, and was the youngest woman ever to win in her category (best female lead in a drama).

Speaking to British Vogue in 2021, the cover star made it clear that these acting roles are simply just the beginning for her.

"I gotta hurry up and figure out how to f**king become a director, man," she told the publication. "I’m trying, I’m learning every day, I really am. There’s so much I want to do."

"If I ever do become a filmmaker, I know that the leads of my films will always be Black women," she added.

Zendaya's childhood and rise to fame.

Zendaya, born Zendaya Coleman to two teacher parents, started acting in theatre productions at a young age. She also scored modelling and dancing gigs, and was back-up dancer for Selena Gomez in a TV ad. But it was getting cast as Rocky Blue, one of the leads in the Disney Channel sitcom Shake It Up, that made her famous. She had just turned 14 when the show premiered.

While on the show, Zendaya launched her singing career, and then, at the age of 16, became the youngest person to compete on the US version of Dancing With The Stars. She finished runner-up.

With Shake It Up ending in 2013 after three seasons, the Disney Channel wanted Zendaya to star in a new series: Super Awesome Katy, about a high school student following in the footsteps of her spy parents. But she was only going to consider it on her terms.

“The only way I was going to come back to the Disney Channel was if I was in a position of more power,” she told Cosmopolitan.

Zendaya, then aged just 16, wanted to be a producer on the show. She wanted her character to be super-smart, trained in martial arts, no good at dancing or singing, socially awkward… and she didn’t want her to be called Katy.

“Do I look like a Katy to you?” she asked Disney execs.

The last of her terms was that she wanted the show to feature a family of colour.

“One thing that is really important to me is diversity on the channel,” she told Cosmopolitan. “It’s hard as a young person of a different ethnicity or background to look at the TV and not see anyone who looks like you.”

The execs agreed to Zendaya’s terms. The show, newly titled K.C. Undercover, was a hit. Zendaya had an input into the content, including a storyline about the controversial stop-and-frisk policing policy.

“I have so many friends who say yes to everything or feel like they can’t stand up for themselves in a situation,” Zendaya told Teen Vogue. “No. You have the power.”

Growing up with an African-American dad and a Scottish-German-American mum, Zendaya was aware of race being an issue from a young age.

“One day, I came to school with my hair straightened, and that was the only day anyone ever complimented me on my hair,” she told Cosmopolitan. “That kind of messes with you.”

She’s never been afraid to speak out. On Oscars night in 2015, Fashion Police commentator Giuliana Rancic made a comment about her dreadlocks, saying she must have smelled of “patchouli” and “weed”.

Zendaya hit back, saying that was “outrageously offensive”.

“My wearing my hair in locs on an Oscars red carpet was to showcase them in a positive light, to remind people of colour that our hair is good enough,” she posted on Instagram.

Mattel then created a Barbie in Zendaya’s red-carpet image, including dreadlocks, to acknowledge her status as a role model.

That same year, she called out Modeliste magazine for retouching photos of her.

"Had a new shoot come out today and was shocked when I found my 19-year-old hips and torso quite manipulated," she posted.

Had a new shoot come out today and was shocked when I found my 19 year old hips and torso quite manipulated. These are the things that make women self conscious, that create the unrealistic ideals of beauty that we have. Anyone who knows who I am knows I stand for honest and pure self love. So I took it upon myself to release the real pic (right side) and I love it😍😘 Thank you @modelistemagazine for pulling down the images and fixing this retouch issue.

The magazine’s editor pulled the issue and replaced the retouched images with the originals.

In 2022, the actor reappeared on the second season of Euphoria as the drug addict teen Rue. While we have already seen the character go to extreme lows in her addiction, this season became an all new challenge to watch - not only for the viewers but the actors as well.

Touching on the episode where an intervention took place (no spoilers here!), she admitted it was an extremely "taxing" scene to film.

"It was so intense and scary to tackle, and obviously something that would be incredibly emotionally taxing, but also physically taxing," Zendaya told EW. "Also, I care about Rue and I hate when she's in pain. And I think this whole episode, there's so much pain and it's bubbling to the surface, and it's also crossed with her withdrawing, which is extremely physically painful."

The role in general was one she might not have taken if she hadn't known just how much a fan or viewer dealing with addiction could find promise in the story.

"My biggest hope is that people are able to connect to it and those who need to heal and grow with Rue hopefully, by the end of this season, feel that hope and feel that change in her," she explained.

While neither Zendaya nor Holland has confirmed their relationship, Holland's Instagram post for her 25th birthday, suggested the rumours are true.

It was also rumoured the Spiderman actor spent a lot of time on the Euphoria set to help comfort Zendaya through her difficult scenes.

zendaya and tom on the set of euphoria, SCREAMING <3 pic.twitter.com/GWOzw34xwK

While the 25-year-old is quickly becoming one of the most talked-about young actresses in Hollywood, Zendaya's acutely aware that she needs to continue to work, harder, to keep it that way.

"I’m always like, 'I will always need to work.' Because if I don’t work then everything can be gone tomorrow," she told British Vogue.