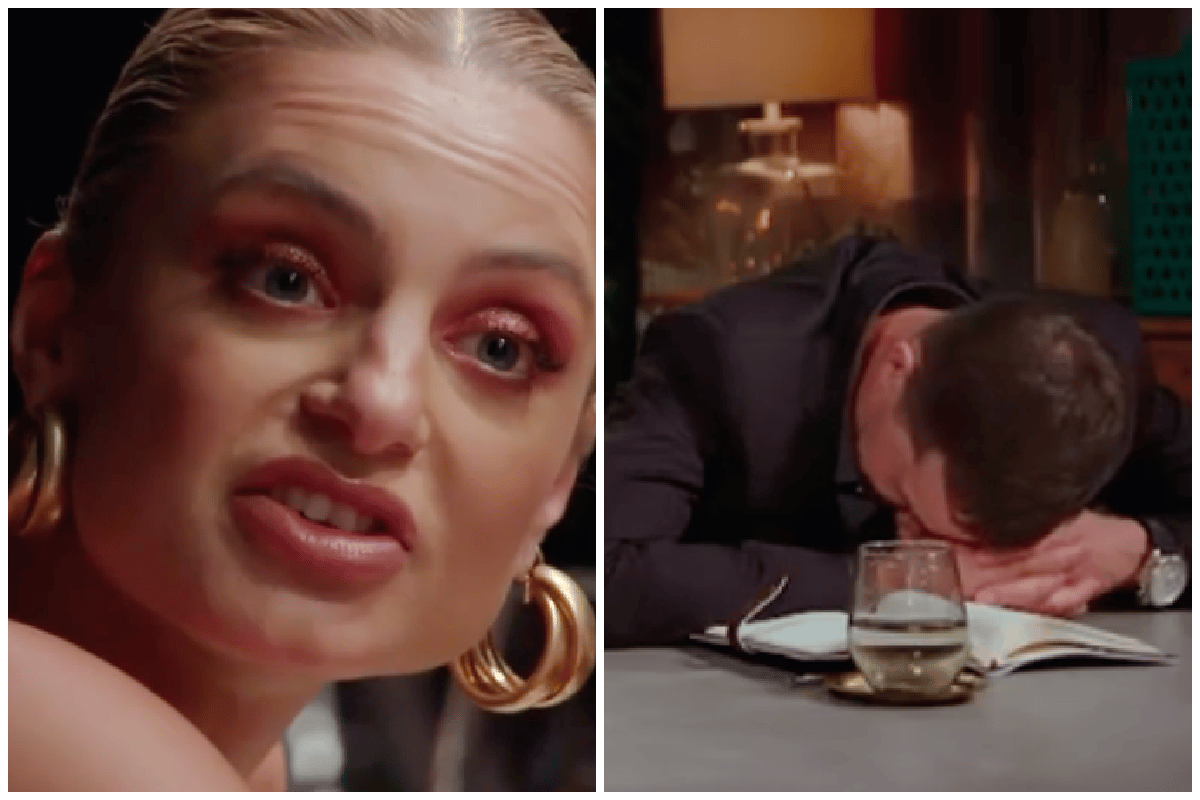 It's the night of the dinner party and, as always, Sam is dressing her toddler, Al.

She's wrangling him into a lovely onesie that's very soft on his sensitive skin, and look. Even when he drives her crazy, she can't hate him. Because he doesn't mean it. 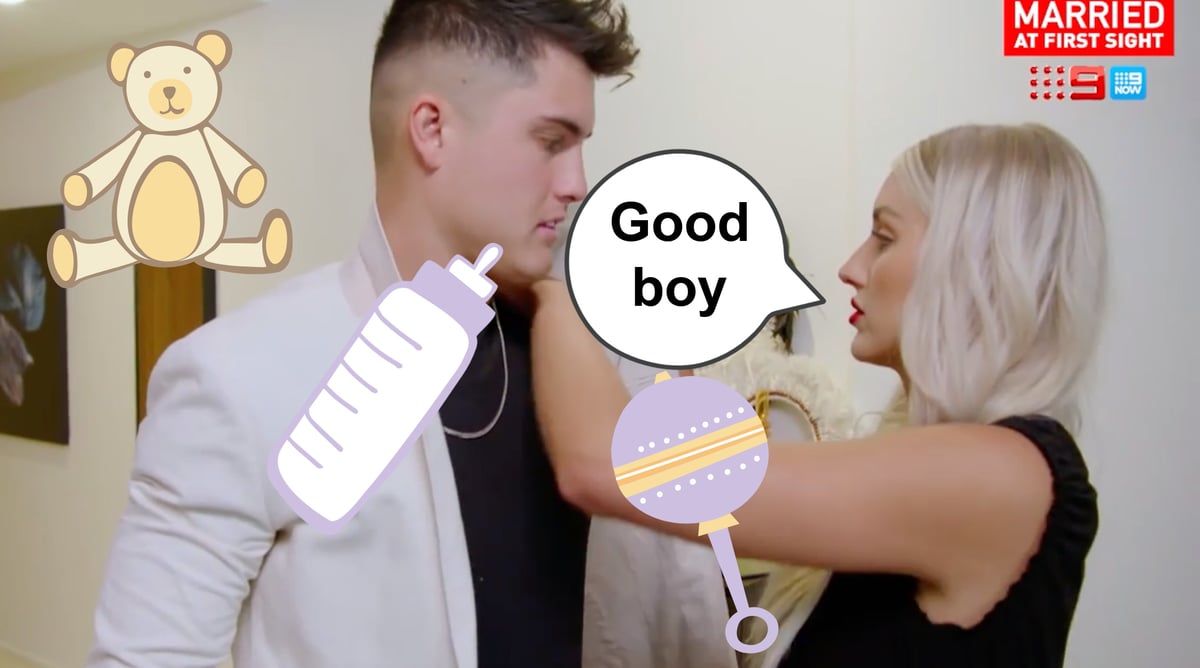 'Hold still.' Meanwhile, Dion and Carolina are no longer living in the same apartment and what we never would've guessed they seemed so good together.

Dion is hoping for an apology from Carolina tonight, for the relentless insults she's directed at him from the moment they got married. But Dion, sweetie. That shan't be happening.

Carolina, on the other hand, is telling the camera she has "very little in common" with Dion...

... such as the fact that she likes to go to the gym and he doesn't.

Instead, Carolina would like to explore her connection with another husband, who happens to go to the gym sometimes. He might even like breakfast, Carolina's preferred meal.

For Kate, her biggest concern is that she and her partner Matt are operating in entirely different universes when it comes to their relationship.

Their whole marriage appears to be Matt shouting "HEY KATE" at his wife while she tries to go elsewhere. So. That seems fun. 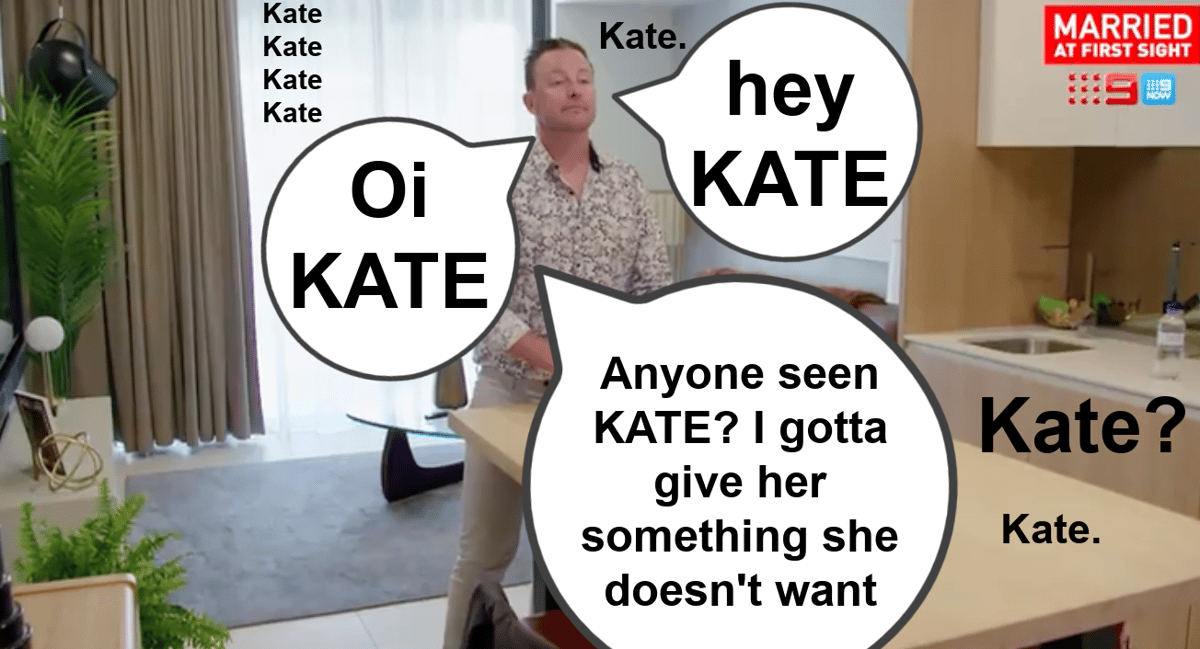 'Leave me the f*ck alone.' But Matt has a surprise. He's bought Kate a gift to celebrate their two-week anniversary and she's so mad.

"What part of our relationship so far has made him think we should be celebrating anniversaries?" she asks the camera and okay in her defence... fkn true.

Kate explains that there's no affection or chemistry, while Matt continues to proclaim that everything is going very well. TO WHOM, MATT. ACCORDING TO WHOM.

The only good news is that Kate has developed a lovely bond with the camera woman, whose company she much prefers to her husband's. 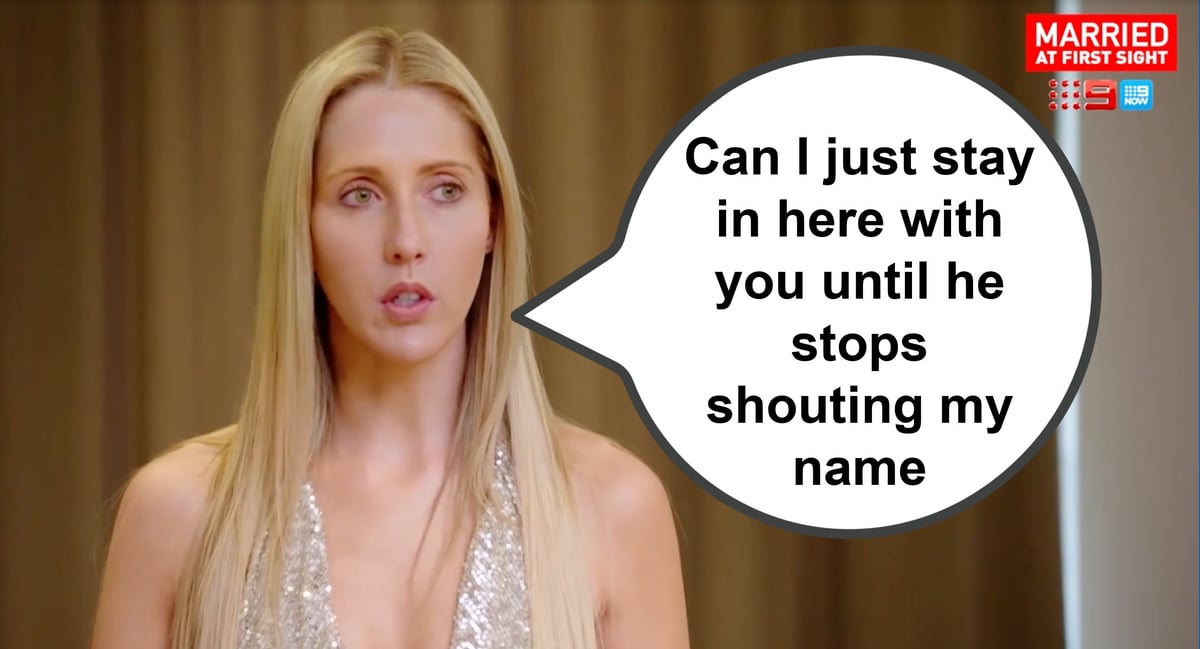 "Can you just tell him I'm dead or something?" Oh.

He's prepared a dance for the dinner party, and he's literally every kid at a family Christmas who has a performance. For the adults.

Al desperately wants Sam to join in but she's a 26-year-old woman and she doesn't want to participate. 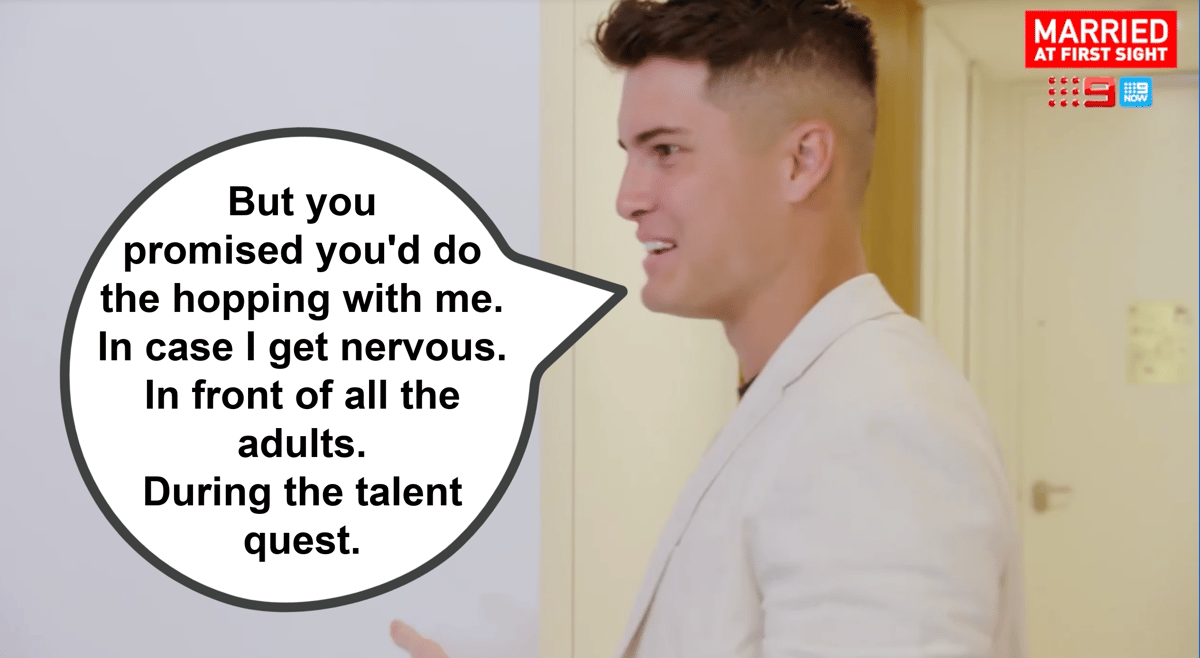 Sam tells the camera she's worried that Al doesn't have that "emotional intelligence" and yeah obviously? He's a toddler? It literally hasn't developed yet??

It's time for the dinner party and we'd like it on the record that of the three 'new' couples, one has left the experiment altogether, one has decided to sleep in separate rooms, and one may or may not end in a homicide. So. Well done. On that.

Dion enters the dinner party alone in a loud jacket which makes it sadder. He's brought with him the letter he wrote Carolina, and asks his new friends if maybe they want it? Because he went to all the trouble? How about you, Brent? Would you like the letter Dion wrote about his parents' divorce?

But the group don't want his letter. They want his gossip. 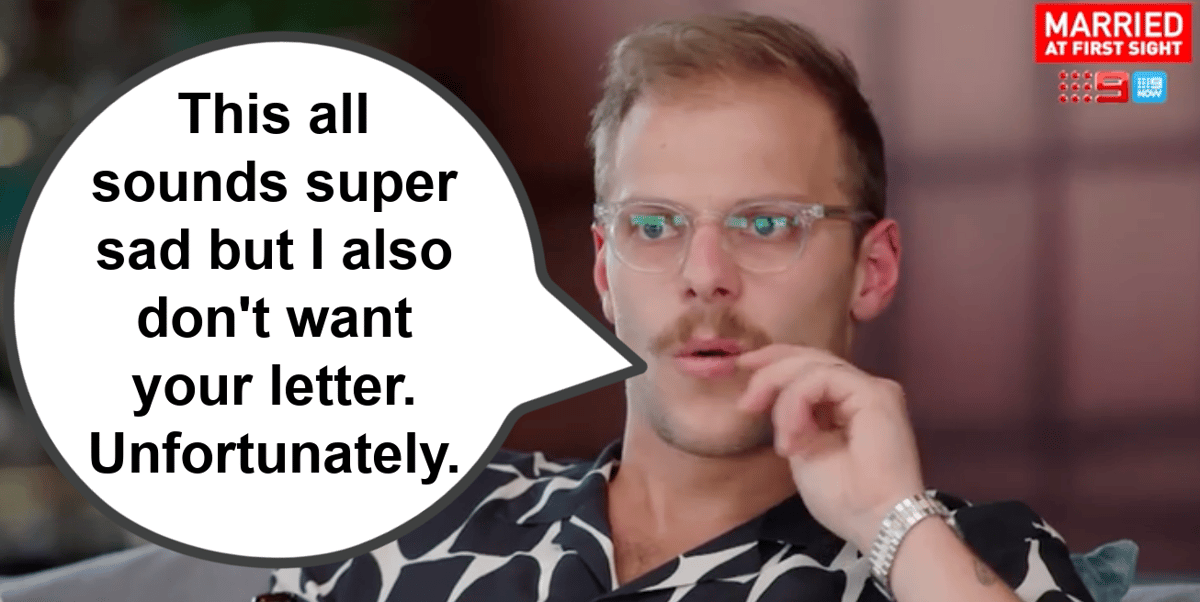 He tells the group that he wanted to go to Bondi, but Carolina refused, because she has 60,000 Instagram followers and people might recognise her.

AND DION WTF THIS IS THE KIND OF INFORMATION WE NEEDED FROM YOU EARLIER. IT'S OUR FAVOURITE KIND OF GOSSIP MOSTLY BECAUSE IT'S SO PETTY.

Suddenly, Al is shocked to see Carolina walk in alone. Everyone else managed to put together that if Dion walked in alone then his wife likely would too, but Al spends 15 long minutes getting his head around it, before DINAR IS SARVED.

Everyone cheers' to the new couples and put down your glass immediately Carolina no one means you.

Jackson tries to offer some guidance to Carolina, explaining "the experts have all matched us for a reason."

Sir. That is a persistent myth you must abandon.

Carolina decides to list off all the ways in which her and Dion are not compatible and don't you dare...

"I LIKE GOING TO THE GYM," she declares and no. We demand you think of one other hobby that isn't the gym or brunch. Also brunch is a mealtime not a hobby do you hear us.

She explains to the group that she just doesn't find Dion attractive (at all) and also hates his personality (he's "empty" inside etc.) before warning that when she gets frustrated she can get "brutally honest" and how much more brutal can one woman... get.

But Domenica is still hung up on the time Carolina wouldn't go to Bondi out of fear of being recognised.

"Babe you're not Beyonce," she scoffs. "Not everyone is going to recognise you with Dion." 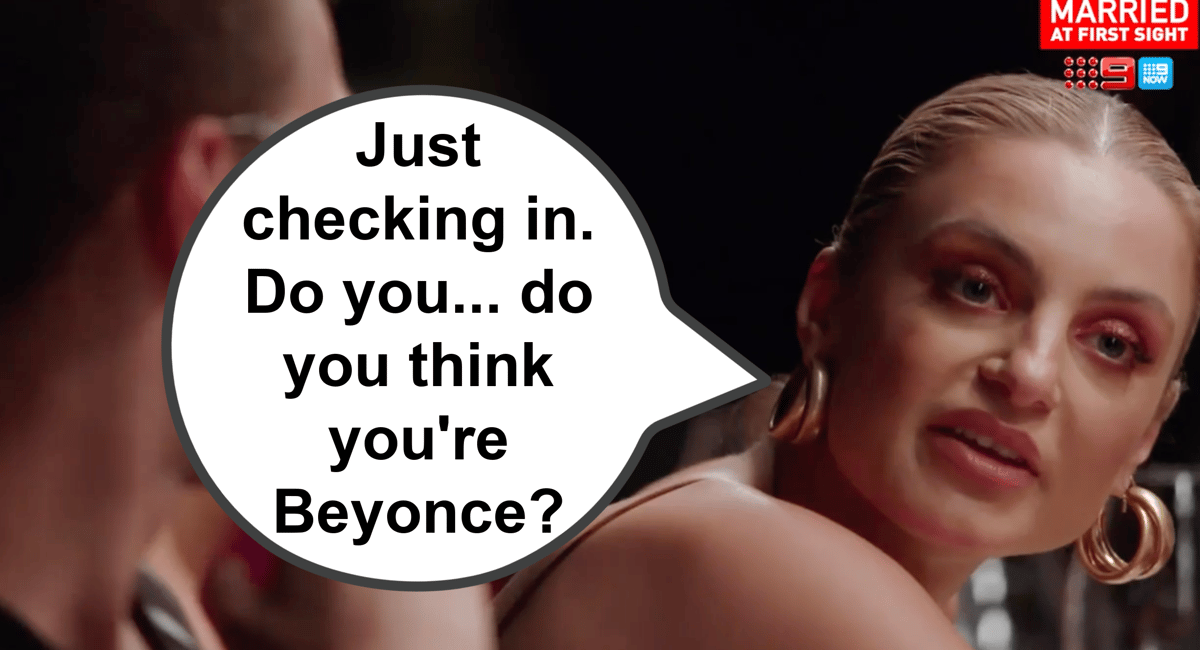 Speaking of, Domenica is pre-menstrual and we should've known. Since we're all across the week in which she... bled.

But the experts have already noted the ins and outs of Domenica's cycle. Instead, they're mad at Carolina. 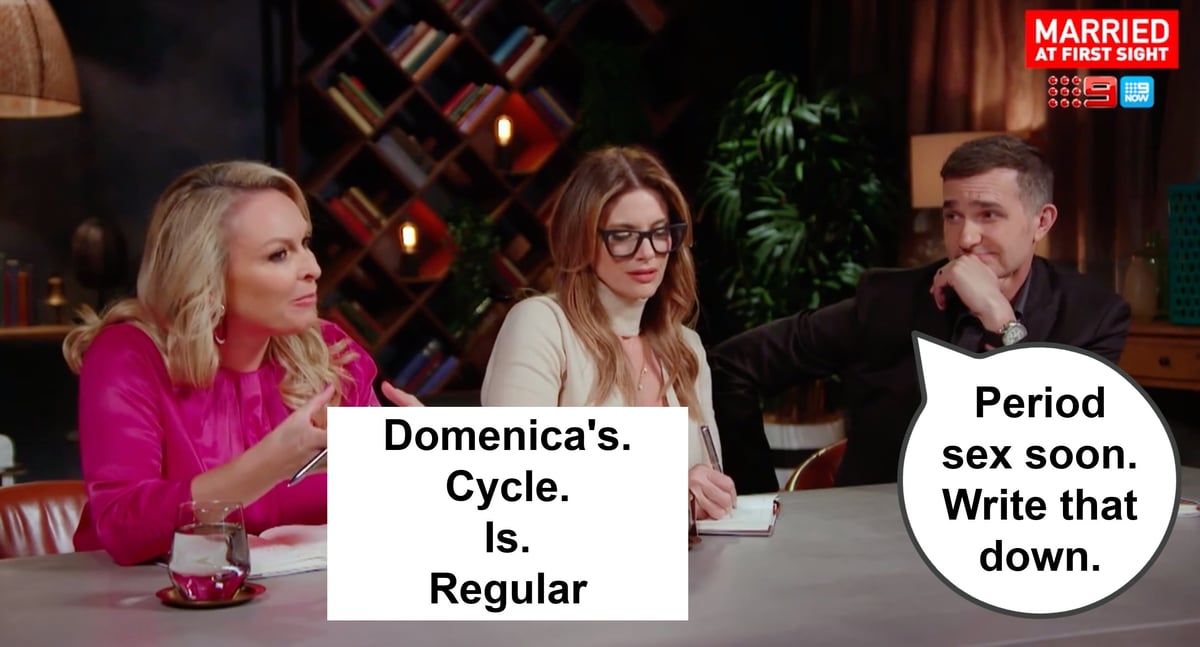 "She would've ovulated seven or so days ago..."

You see, they gave her someone "dependable," and she isn't... appreciative enough about it.

You can't just give a person someone dependable and expect them to have a lifelong marriage. That's not how relationships work. That's not how attraction works. That's literally not how any of this works.

When questioned about Dion's letter, Carolina essentially says she found it... boring. In that there wasn't enough trauma in it. Also, she'd already heard the general gist. So it was repetitive. In that way. 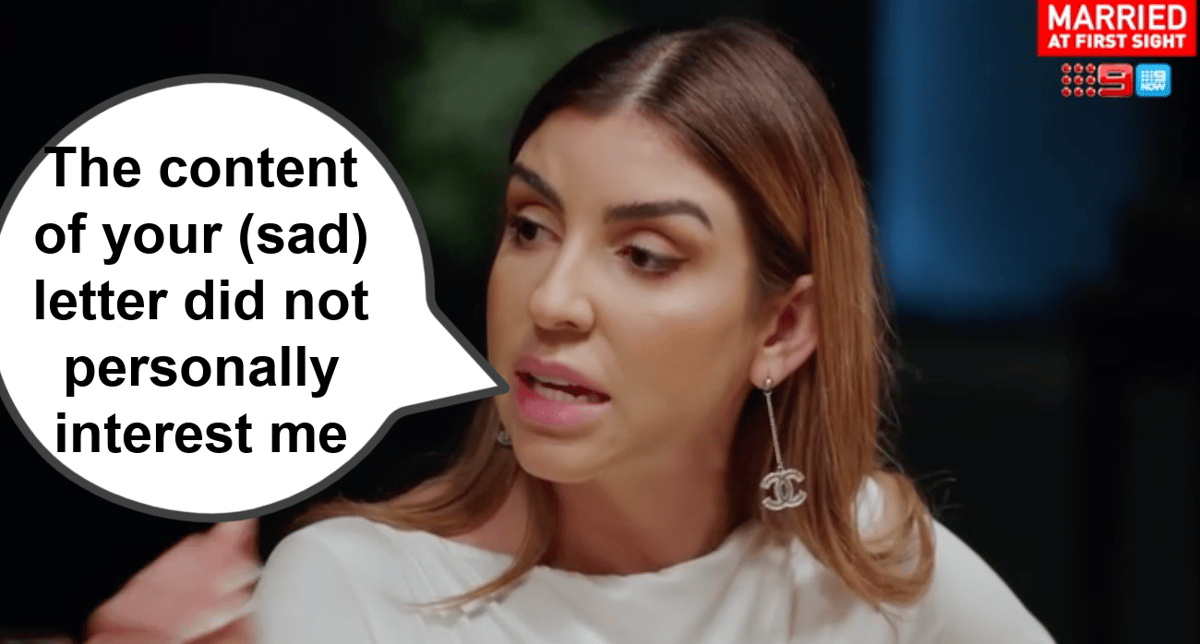 Your life has been too happy.

She yells that she's been trying very hard to find a connection every minute of every day, except when she was at the gym. With Daniel. Except for then.

Suddenly, Dion starts emotionally shouting at the camera about needing a glimmer of hope and honestly, we're increasingly shocked by how much this man appears to care. When this whole thing is an incredibly humiliating mess.

Domenica decides it's now time to confront Mitch about how he wants to leave this toxic and profoundly unhelpful experiment.

But surprisingly, he makes the most sense out of literally everyone. He explains that he's not good with big groups and he's just not sure this environment is conducive to establishing a healthy relationship.

At the other end of the table, Kate is bitching about how Matt walks around for an hour in the morning without a shirt on. Yawning.

Put a shirt on and stop yawning, for a start. Because we're starting to irrationally dislike you more every second and we can't tell whether it's because you look like you exclusively belong on a golf course or because we're simply picking up Kate's hatred by osmosis.

Unfortunately, Matt can hear everything Kate is saying, including the fact that she doesn't really want to talk to him anymore.

"Do you think attraction can grow?" he asks Kate, who launches into a tirade about how the more she gets to know him, the less she likes him.

But this is a man who - despite all sense of logic - refuses to give up. "The Titanic hasn't sunk yet..." he tells the camera and SIR. HOW DO WE PUT THIS.

IF YOUR MARRIAGE IS THE TITANIC, IT IS AT THE BOTTOM OF THE OCEAN. IT IS DECOMPOSING. PEOPLE HAVE DIED. THE LIFEBOATS ARE SINKING. NO ONE IS COMING TO RESCUE IT. BECAUSE NO ONE EVEN CARES VERY MUCH.

Darling Al doesn't like it when the adults are tense. So, yeah. It's time for his dance.

He slides across the table, twice, definitely injuring himself and upsetting the waitstaff. The entire time, he looks eagerly at Sam, as though to say: "Mum, mum, mum, watch my dance." 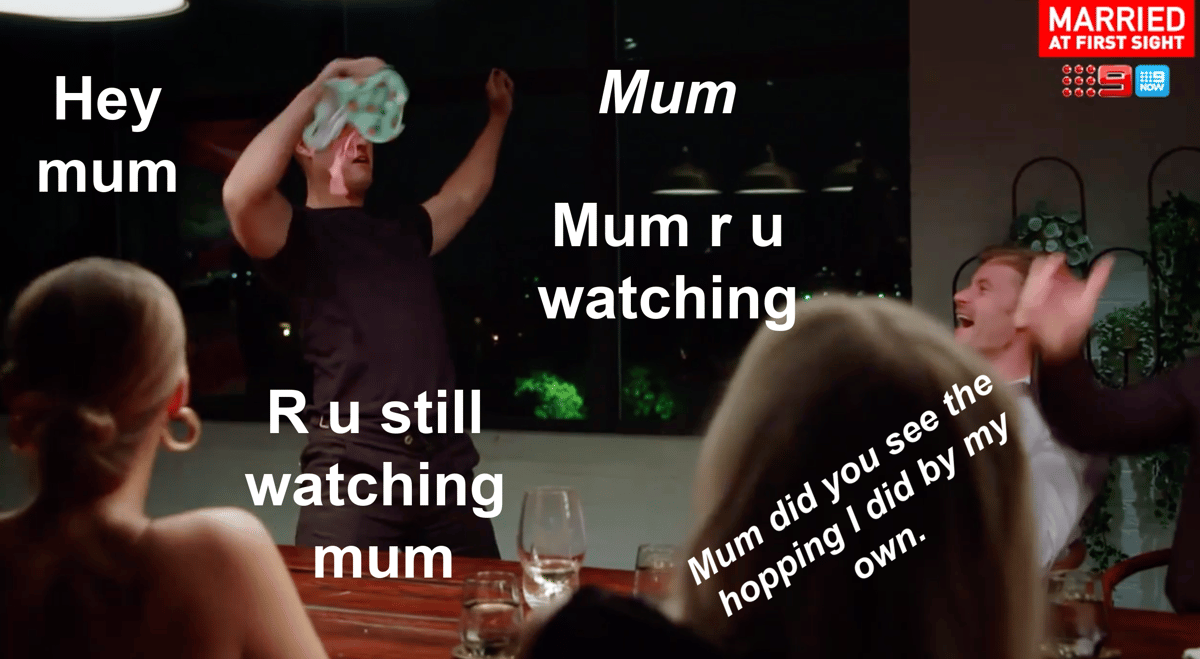 He ends with a trick, pulling what genuinely looks to be a bib out of his own underpants. At a dinner party. Then he sniffs it.

Sam is mortified. She's spoken to Al about his behaviour. "I don't know who he is, but that might just be because he's growing," she tells the camera.

Yes, he is growing.

"I don't have the energy to carry him through that," she adds, and okay. It's hurting her back. Carrying Al. Physically. In his Baby Bjorn.

With his mum disappointed in him, Al strikes up a conversation with some friends. He shares that when Sam's dad asked him what he does in his spare time, he said he likes to play video games.

The men are horrified. 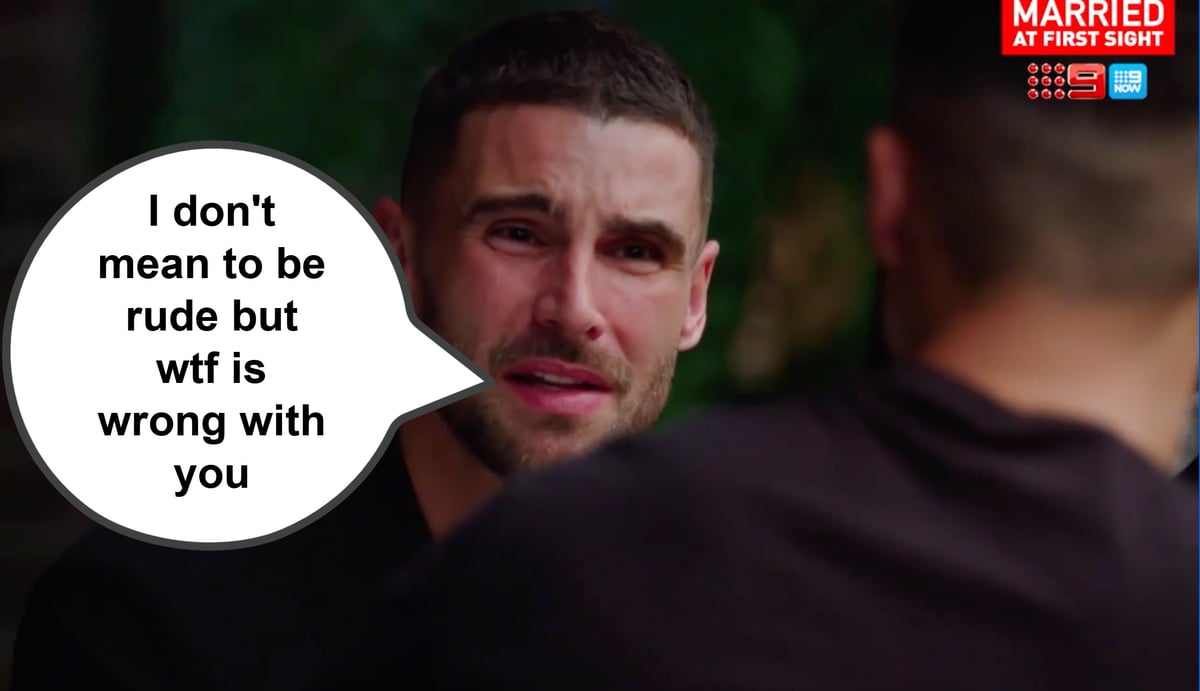 Even Mitch, who thinks this entire spectacle is broken, yells "JUST LIE."

That's when we see John Aiken. With his head in his hands. Broken. Because this toddler has embarrassed himself and by extension the Married at First Sight franchise. With his stupidity. 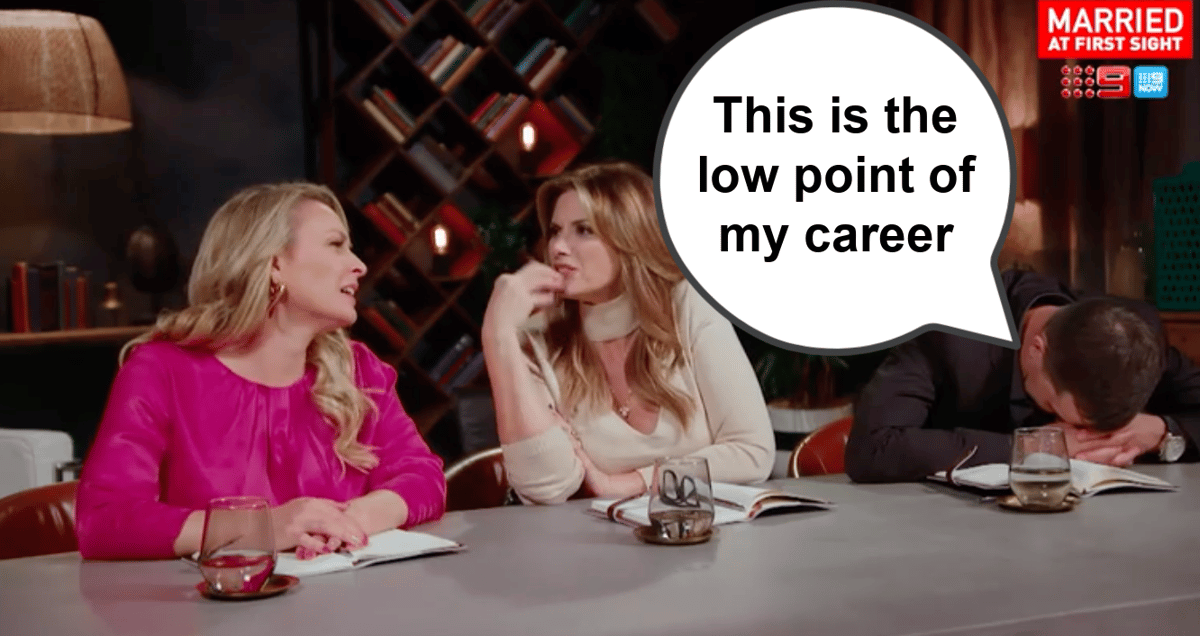 But there's more. Al tells the other men that Sam's dad asked him where he sees himself in five years.

"HAPPILY MARRIED WITH A NEWBORN ON THE WAY," Jack yells. And Al's face falls.

"Oh, no," he says, with genuine awe in his voice. "That would have been a good answer."

Instead he said something about Mykonos.

A bored producer makes Al try again, and this time he answers:

No, Al. That is also terrible, although for vastly different reasons. 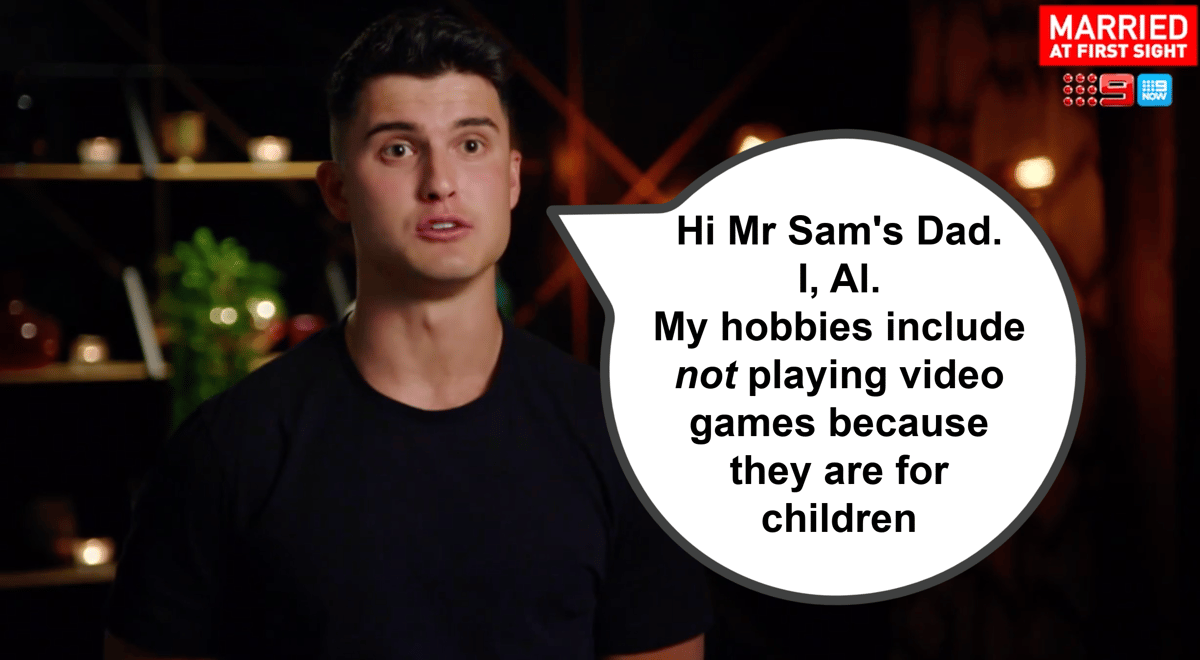 I am grown up.

Dion takes Carolina aside and asks her directly whether she thinks there's any hope for their marriage. But she's annoyed. He's wasting precious time she could be spending cheating on him with Daniel? So she yells at him to wait until the commitment ceremony like the rest of the nation.

The Twins recap Married at First Sight episode 19: We have feedback about the cheating scandal.

The Twins recap Married at First Sight episode 18: OK. So at this point people are just walking out.

The Twins recap Married at First Sight episode 17: Why are the experts... gaslighting the women?

The Twins recap Married at First Sight episode 15: "You couldn't script this sh*t."

The Twins recap Married at First Sight episode 14: We have feelings about the bride who ran three hours late.

The Twins recap Married at First Sight episode 13: A burning question for Brent and Tamara.

The Twins recap Married at First Sight episode 12: The most manipulative night we've seen on television.

The Twins recap Married at First Sight episode 11: Andrew needs to be stopped.

The Twins recap Married at First Sight episode 10: The couple that can't stop fighting about sex.

The Twins recap Married at First Sight episode 9: The groom's decision that 'doesn't make any sense'.