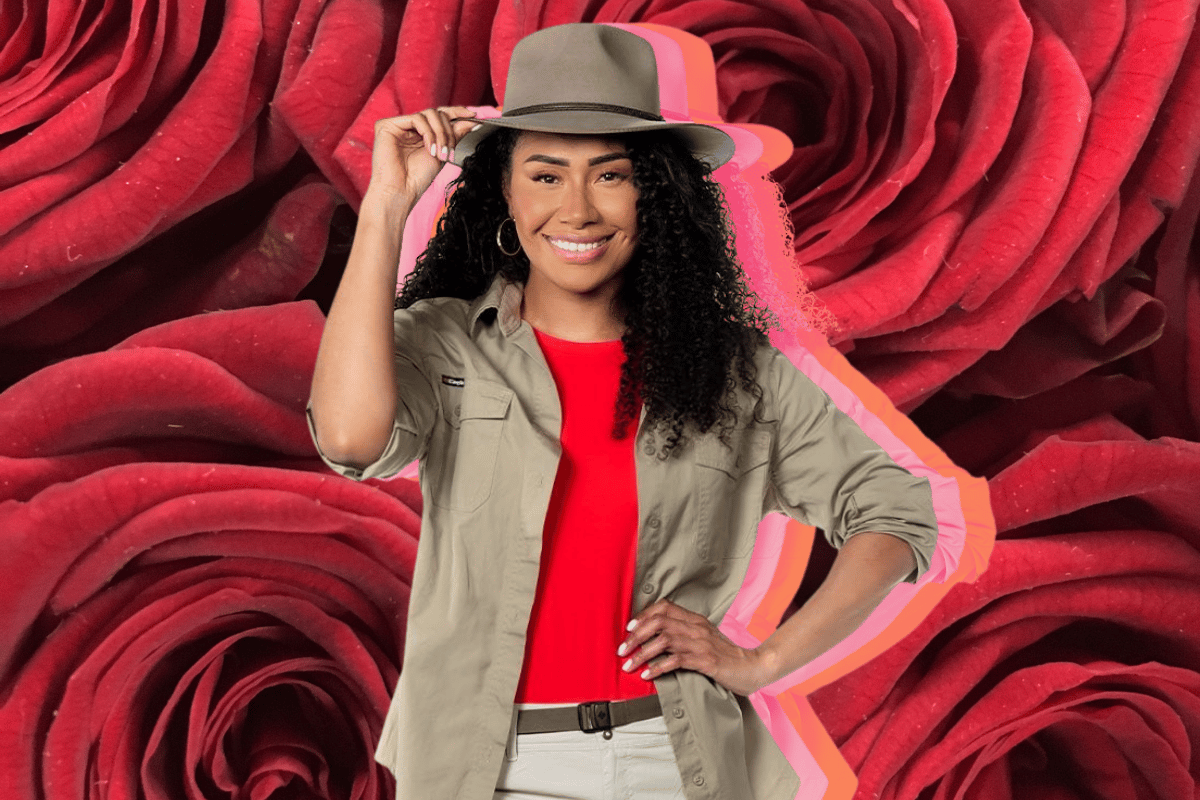 1. Abbie Chatfield is making a case for Paulini to be the next Bachelorette, and where do we sign?

Abbie Chatfield wants her fellow I'm A Celeb co-star, Paulini, to be our next Bachelorette. And we seriously couldn't agree more.

"Beautiful inside and out, my campaign remains for Bachelorette 2021 pls @paulini_curuenavuli," Abbie wrote on her Instagram stories earlier this month. 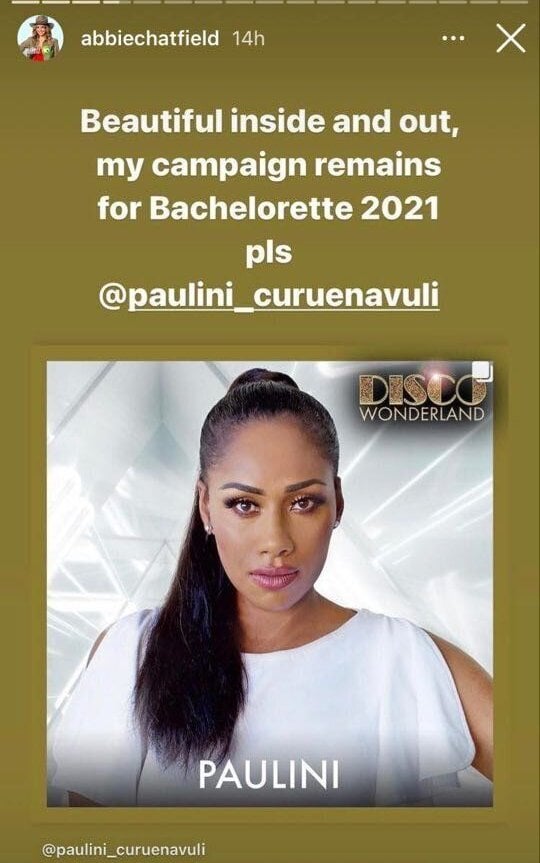 And we're not the only ones who support Abbie's case. Paulini said she's also keen on the idea.

"I’ve never watched it but if I was the first person of colour to be on there, then bring it on," she told HuffPost Australia.

"I would love that. It would just be fun, but like I said before, I’m quite reserved and shy so let’s just see."

The Bachelorette wouldn't be the first reality show Paulini has appeared on. Aside from I'm A Celebrity, the 38-year-old also competed on Australian Idol in 2003 and The Masked Singer in 2019.

Please someone make this happen!

Listen to The Spill, Mamamia's daily entertainment podcast. In this episode, co-hosts Kee Reece and Laura Brodnik chat about Jennifer Lopez and the question we should be asking about celebrity beauty businesses. Post continues below.

2. Why MAFS’ most successful couple would rather “crawl over glass” then go to the reunion.

The Married At First Sight all-star reunion is less than two weeks away. But there's one couple who certainly won't be making an appearance.

Erin Bateman and Bryce Mohr - aka the show's longest-standing couple - met on MAFS back in 2016. But they're not so keen to relive the memories during the upcoming reunion. And by 'not so keen', we mean they'd literally "rather crawl over glass".

Speaking to The Wash about their absence from the two-part special, Erin said, "We were not invited, we knew nothing about it. And to be honest, I would rather crawl over glass than go to that".

These days, the couple live a private life away from the spotlight (and the ongoing drama of the show).

"I'm sure it infuriates a lot of people that they're not kept in the loop because the nature of reality TV is you then go on to flaunt your whole life on social media," Erin told fellow MAFS star Bella Frizza on the podcast, The D&M.

"I don't think it's normal. I know personally people who portray their relationship on social media as this fairy tale, who are some of the most miserable people I've ever met, in terms of relationships."

3. Jack Vidgen said he will not be keeping in touch with one I’m A Celeb campmate, and now the whole of Australia is playing guess who.

Recent I'm A Celeb evictee Jack Vidgen has noted that there is one campmate he will not be keeping in touch with. And now, it's time for us to figure out who.

During an interview with Nova FM on Monday, the 24-year-old was asked whether there was anyone that he'd happily never speak to again.

"Was there anyone in the jungle that you met, that you'd be like 'you know what? Happy to never talk to you again'?" said Kent "Smallzy" Small.

"Yeah, but I'm not going to say their name," Jack said after thinking for some time.

While he didn't say who it was, Jack later shared who his three closest friends were on the show.

During Jack's time on the show, some drama unfolded with fellow contestants Abbie Chatfield, Ash Williams and Alli Simpson, after Ash proclaimed that Alli was more his type than Abbie. So we assume Jack is sticking by his friend and suggesting that he'd happily never speak to Ash again.

However, nothing was confirmed so we'll continue to play guessing games.

Jack became the first campmate to be evicted when he got sent home on Sunday night's episode. There are now 14 contestants on the show competing for $100,000 to donate to their chosen charity.

4. Megan Marx, years after the fact, is talking about her breakup with Tiffany Scanlon for the first time.

Over the past few years of The Bachelor, there have been many relationships and breakups that stuck in our mind. One of those included Megan Marx and fellow contestant Tiffany Scanlon.

Both women appeared on Richie Strahan's season of The Bachelor and started dating each other post-show. Now, years after their split, Megan has gotten candid about their breakup.

Appearing on the latest episode of the So Dramatic! podcast, Megan Marx told host Megan Pustetto about their split.

"When you first meet someone you show all of your best self to that person; on the outside we both liked adventure and were 'yes' people to new things.

"Basically we ended up really not liking each other as human beings. It was just a disaster," she continued.

Megan also explained that since this was the first time there was a same-sex Bachelor relationship, the women were under a lot of pressure.

"There was all this pressure," she said. "The biggest thing was letting down the LGBTIQ community."

While this was the first time Megan spoke about their breakup, soon after their split Tiffany explained what happened on her blog.

"I was tired of the scrutiny. Tired of defending myself, tired of the negative attention and tired of pretending to be happy," she added.

Megan went on to date Jack Ellis from The Bachelor franchise after they both appeared on the first season of Bachelor in Paradise. However, that relationship has since ended.

5. Bernard Tomic's partner gave a tour of their hotel quarantine room. Nick Kyrgios called them out.

On Monday, it was reported world No.1 Novak Djokovic - who arrived on a virus-free flight and is being allowed to train in a secure bubble in Adelaide - wrote to Australian Open organisers asking them to ease quarantine restrictions for players. 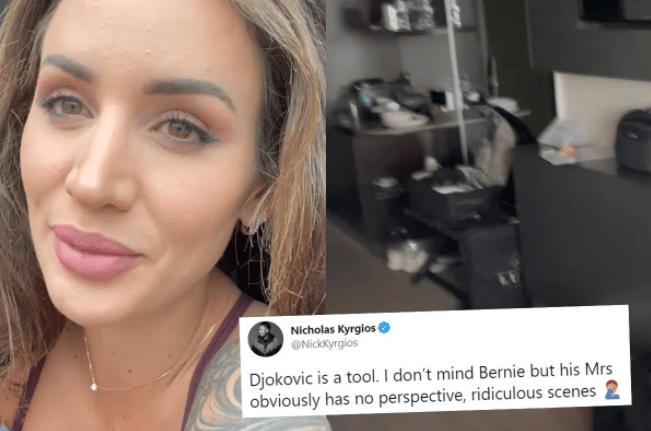 Later the same day, the girlfriend of Australian world No.228 Bernard Tomic, Vanessa Sierra, uploaded a YouTube video about what life was like in hotel quarantine.

While other Australian players including Ash Barty and Kyrgios are enjoying normal life, Tomic is in quarantine after attending the grand slam's qualifying tournament in Qatar.

Tomic is allowed to train during his time in quarantine, but Sierra explained in her video that so far, there had been delays and no trainings had taken place.

Sierra gave a tour of their shared hotel room. She said the space was too small to workout, so the couple have been spending their time doing "minimal yoga" and playing video games.

Sierra also said the food in Melbourne had been inconsistent but is "improving every day".

For more on why Nick Kyrgios called them out, read our earlier article here.