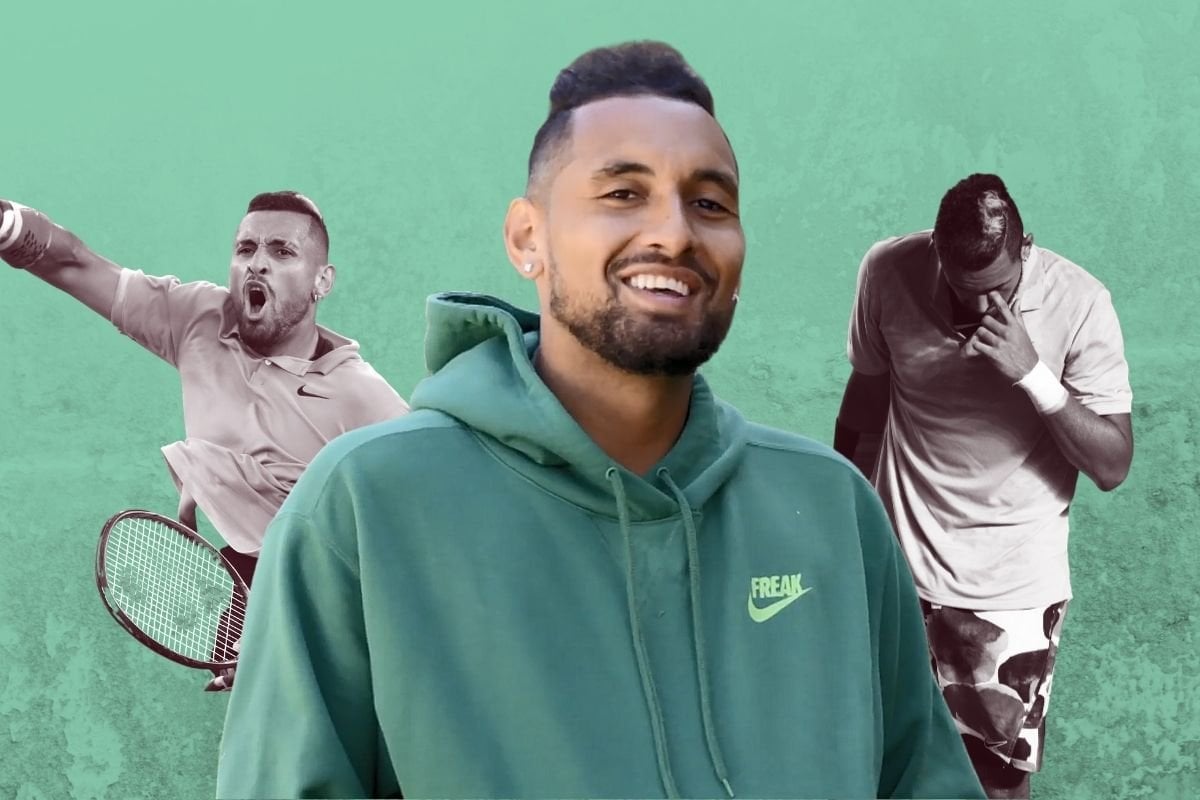 Nick Kyrgios was trending on Twitter on Wednesday night.

That sentence is normally followed by some arrangement of the words 'behaviour', 'bad boy', 'attitude'.

But courtesy of his turn in the ABC program, Reputation Rehab, the commentary around the tennis star today is far more redemptive.

Watch: Nick Kyrgios on what people don't understand about his job.

The offbeat show, which is hosted by Kirsten Drysdale and Zoë Norton Lodge, dissects Australia's love of a pile-on by chatting to the people who've been relegated to the bottom of the "cultural scrapheap".

Over his seven-year career, the Canberra-born man has attracted plenty of commentary and column inches courtesy of his actions on court and in front of the press.

There were the times he appeared to have given up mid-match, the times he swore at umpires, smashed racquets and threw chairs. "Unsportsmanlike conduct" such as the latter has seen him slugged with 13 professional fines totalling more than $300,000 (more than half of that amount was accrued during a single match at 2019's Cincinnati Masters).

As a result, he's developed a reputation as the 'entitled' 'bad boy' of tennis.

"He's a tool," Ben Fordham once concluded on Today. "A black eye for the sport," added John McEnroe, King of Smashed Racquets, Earl of Profanities.

But the program turned the spotlight back on Australia's behaviour, too. And for many, it illuminated a far more nuanced picture of our national relationship with the star.

Particularly glaring were the occasions in which the backlash to Kyrgios went beyond finger wagging and tut-tutting.

In 2015, Olympic gold medallist Dawn Fraser told Today that young tennis players like Kyrgios (who is of Greek and Malaysian decent) and Bernard Tomic (whose parents are Croatian and Bosnian) ought to set a better example to young Australians or "go back to where their parents came from".

And that's to say little of the steady stream of racist private messages the sportsman receives via social media.

"I guess it's just the culture of tennis," Kyrgios said on Reputation Rehab. "It's supposed to be a nice, white, gentleman's sport, you know? So seeing someone coloured, like myself, go out there be different and be successful, it's not so easy to see at times." 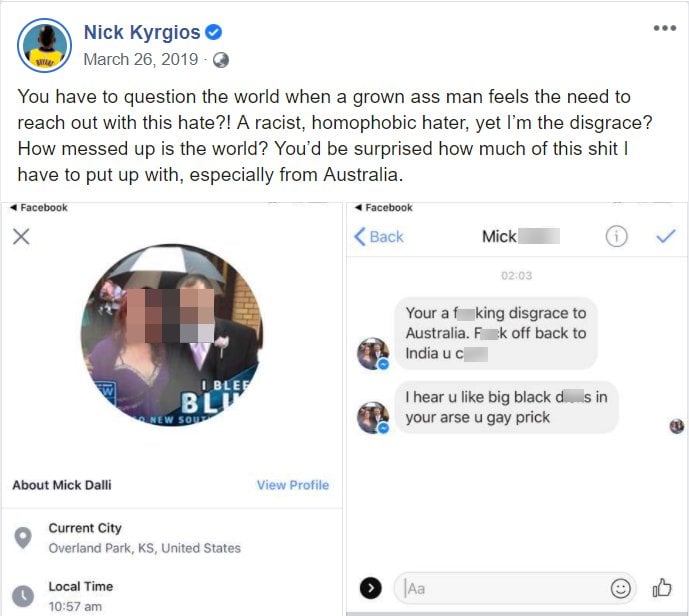 At no point during the program did Kyrgios excuse or defend his behaviour. Instead, he simply acknowledged that, at times, he's "battling with himself" and struggling to cope with external pressure, which may help some understand it.

"I mean, it all happened so quick for me. I wasn't used to having cameras in my face, being in the spotlight, when I was 17-18. And then obviously, after Wimbledon [2014] when I beat [Rafael] Nadal, everything kind of changed from the get go," he said. "There were people camping outside my house for two weeks when I got back home, following me around when I went to the mall and stuff. I wasn't really ready for the dramatic changes that I was experiencing."

Many have coped with those changes far better and with more maturity. But he's certainly not the first or even only pro on the circuit tossing racquets, tousling with umpires and huffing at the press (see McEnroe, Novak Djokovic, Andy Murray, et al.).

This is VERY good (Reputation Rehab, although Gruen’s great as well obv). So many big laughs and it’s well on the way to actually changing the GF’s previously low opinion of Kyrgios. https://t.co/x3nSw8JYs9

Reputation Rehab posits that Australia's particularly intense reaction to Kyrgios is partly a result of our frustration at his unreached potential (he's yet to win a grand slam and hasn't cracked the top ten) — "Our identity is so tied up in sport. So when they're losing, it feels like we're losing".

Australian's will always forgive a winner, they argue. After all, we've given second and third chances to a number of football players guilty of far more contemptible — even criminal —  behaviour. (Think domestic violence, indecent assault, drug offences and public brawls.)

And this year, Kyrgios has been more deserving of another chance than ever.

Amid the devastating east coast bushfires, he spearheaded the Aces for Bushfire Relief campaign at the Australian Open (in which players donated money for every un-returned first serve) and organised the all-star Rally for Relief match, which raised nearly $5 million.

As his mother, Norlaila Kyrgios, told Reputation Rehab, a 'bad boy' reputation doesn't have to be permanent.

"I think you can shake the image, but it takes time," she said. "It takes hard work to try to do good, and one little mistake will put you back many steps — that's always the way it is, isn't it?

"But that's our journey at the moment, so we just embrace it."

The question is, will Australia?