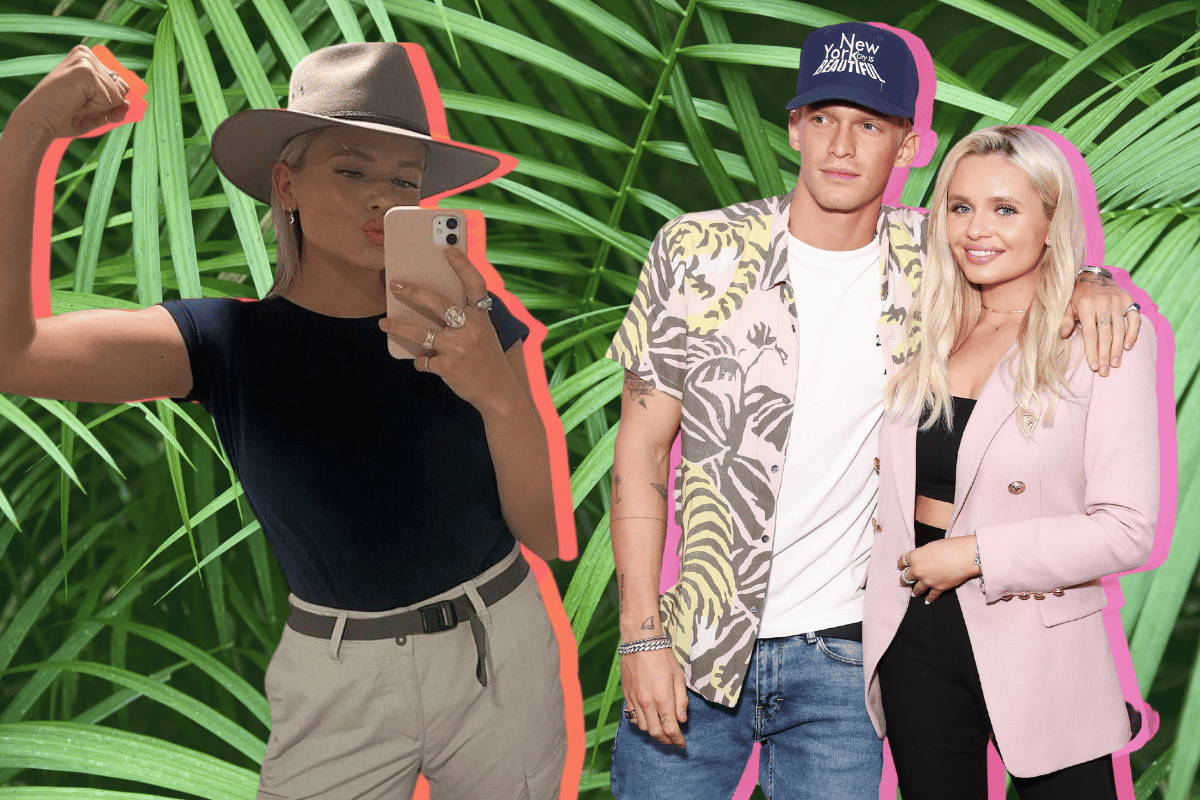 When Alli Simpson entered the I'm A Celeb jungle last night, it surprised... precisely no one.

Thanks to a pretty obvious editing fail, it wasn't hard to work out that the 22-year-old was the camp's next mystery intruder.

For many of us watching at home, Alli's last name will no doubt ring a bell, thanks to her older brother and Aussie singer Cody Simpson (aka Miley Cyrus' ex-boyfriend and the guy under the robot suit on season one of The Masked Singer).

Watch the trailer for the new season of I’m a Celebrity… Get Me Out of Here! Post continues below.

But while Alli started off by following her brother's footsteps in the music industry, the actor, singer and model has forged her own successful career.

Here's everything we know about Alli Simpson's life in the spotlight.

Breaking into the music industry.

Alli was just 12 years old when she moved to Los Angeles with her parents and younger brother Tom to pursue Cody's music career.

And it didn't take long for her to follow suit. In 2013, she began recording her own music at the ripe old age of 15. She also hosted her own radio show, The Alli Simpson Show, where she interviewed a bunch of celebrities like Justin Bieber and Selena Gomez.

The 22-year-old, who grew up on the Gold Coast, also went on to release five singles under her own label, So Alli Records.

But despite her success, Alli said there's "no jealously" between her and Cody.

"I couldn’t tell you one time we’ve ever had an argument. For me, there was no jealousy, or feeling like I was in his shadow. I’m proud to be his sister," she told Stellar magazine in 2018.

Sleeping on the streets on Filthy Rich & Homeless.

In 2018, Alli swapped her Los Angeles apartment for the Sydney streets when she took part in SBS's Filthy Rich & Homeless.

The singer was one of five privileged Australians who joined season two of the show, which aimed to raise awareness of Australia's homelessness crisis. Stripped of possessions, given second-hand clothes and a sleeping bag, Alli was sent out to live on the streets for 10 days.

Speaking to Mamamia that year, Alli said she took part in the show to use her platform for good and to help make a difference.

"Going into it I thought I was strong and I could get through it, but once I started and was out on the street it was really real and really confronting, and a lot more difficult than I thought," she said.

"It’s a feeling that I’ll never forget and one of the most awful feelings I’ve ever experienced."

Alli returned to Los Angeles the day after filming wrapped, but she said she would never forget the eye-opening experience.

"As soon as I walked into my apartment I just burst out crying," she told Mamamia.

"I was looking at all of my stuff and all of my things that are just so unnecessary and all these things I just would've killed for out on the street that I had, and this was my life. I was thinking about all the people I met along the way and they're all still there in the awful position and I'm here back in my life that I'm very happy in. That was the really difficult part about coming back."

Alli is currently competing on I'm A Celeb to raise money for her chosen charity, the Gold Coast Project for Homeless Youth.

She may have caught the attention of Ash Williams on I'm A Celebrity, but it looks like Alli is currently taken.

The singer and actress is in a relationship with real estate agent Mitchell Lambert, who she recently shared a cute photo with on Instagram.

"I came out of a relationship a couple of months ago but [have] recently been seeing someone and he's great," she said on the show last night. "It's fresh for both of us so I'm going with the flow."

Before Mitchell, Alli was previously in a relationship with Aussie actor Mitchell Bourke, as well as singer Conrad Sewell, who she started dating in 2017.

Alli and Conrad, who first met at the 2015 ARIA Awards, eventually called it quits in 2018, telling the Daily Mail it was a "mutual decision".

"It's sort of the first time I've had a relationship that's been kind of public. It's definitely difficult," she said.

"It was a mutual thing, but we were talking about it at dinner [in Sydney] and it's a difficult thing to have a relationship in the public eye. I don't even know what the right thing to say is and how involved you want to get with the rest of the world."

Alli on her brother Cody Simpson's break up with Miley Cyrus.

Speaking of relationships, Alli became close friends with Miley Cyrus when she was dating her brother Cody last year. She even reportedly spent three months with the couple in LA in March.

"Miley is actually super lovely and I really like her," she previously told the Gold Coast Bulletin.

The singer recently spoke about her brother's relationship with his ex during an interview with The Daily Telegraph.

"'I don't know if they speak still but I know they are on good terms," she told the publication this week.

"She is super beautiful and such a caring person so it is nice to see them both so happy. It is really nice," said Alli.

Entering the I'm A Celeb jungle.

After a bunch of rumours, Alli finally confirmed she was entering the I'm A Celeb jungle on Tuesday.

"AUSSSS!! you better believe it fam.." she wrote on Instagram.

Speaking to The Courier Mail, Alli said she's been considering going on the show for some time.

"It’s something I’ve always thought about doing... it’s been on the cards for a few years and I’ve been hesitant."

In particular, the singer said her phobia of insects and cockroaches stopped her in the past. And honestly, we get it.

"Because I have such serious fears of them that’s always been my biggest hesitation," she told the publication.

"I knew I’d be faced with them. I was prepared for that, but … there was definitely a lot of crying and screaming."

The publication also reports that Alli apparently turned down a role in the horror film The Possessed to go on I'm A Celeb.

Here's hoping Alli can outlast her fellow campmates and be crowned queen of the jungle.