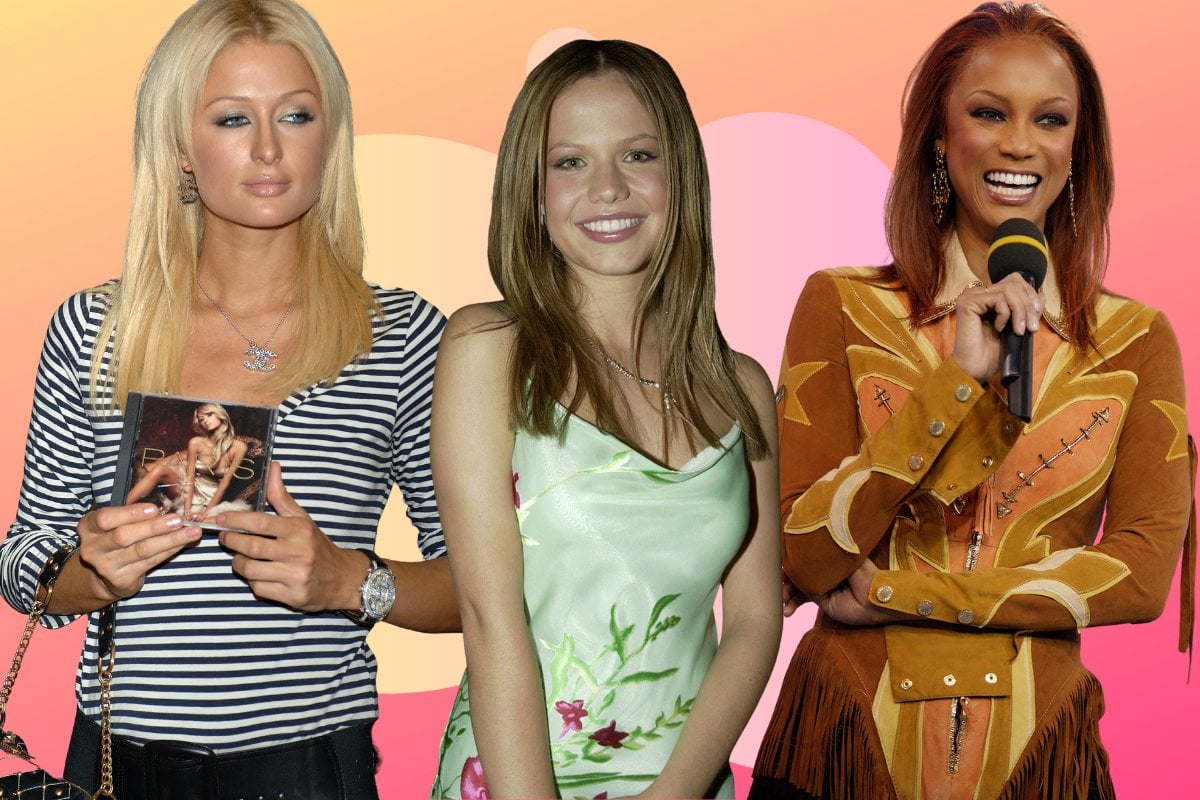 Hollywood is full of actor/singer/dancer/model combinations, commonly known as double or triple threats.

Think JLo, Jamie Foxx and pretty much every Disney star to ever exist.

Not everyone can have a successful career across multiple parts of the entertainment industry, but that doesn't stop a lot of celebrities... trying.

Bonus celeb: That time Kris Jenner sung about how much she loved her friends. Post continues below video.

From the reality TV and Australian soap stars of the early 2000s, to supermodels and more 'worthy' actors, here are celebrities who gave music a go.

Neither of the albums did much critically or in sales, despite being released in 2008 and 2009 when she was already an A-lister.

David Bowie did the backing vocals for her lead single which is for sure the most impressive thing about it.

In the 2000s, Paris Hilton was peak pop culture.

So it strangely made sense when she launched a music career in 2006 with banger first single 'Stars Are Blind'. You may laugh, but 'Stars Are Blind' is a tune. The Mamamia office listens to it ironically, but also... unironically.

Follow up single 'Nothing In This World' was also pretty good.

She later gave up singing and forged a pretty successful DJ career.

Kim K's single 'Jam (Turn It Up)' is probably the worst song to exist. Like, worse than Crazy Frog.

You know those Netflix Christmas movies you know are terrible, but also really endearing and enjoyable to watch? 'Jam' is not really like that, it’s mainly just terrible, but it also raised a bunch of cash for St. Jude Children’s Research Hospital in Tennessee which is nice.

In 2004, Tammin Sursok left her role as Dani on Home and Away to pursue a singing and acting career in the US.

She released her debut album Whatever Will Be in 2005 with lead single 'Pointless Relationship', followed by a couple of other songs 'Whatever Will Be' and 'It's a Beautiful Thing', which each charted between No. 7 and No. 49 on the ARIA Singles chart.

On a recent Instagram Q&A, Tammin said she had attempted a music career but... yeah. Her acting career took off more, with roles on Young and the Restless and Pretty Little Liars.

In September 2020, Vin Diesel made an announcement no one needed, nor wanted. But alas, he was about to release music.

He released two songs 'Feel Like I Do', with Norweigan DJ Kygo, and 'Days Are Gone'. They're not bad, but nothing spectacular.

It's actually pretty weird that the guy who sung that 'Peter Panda Dance' song in The Pacifier can... sing for real.

It really seemed that 'having a fledging pop career' was written into the contracts of early 2000s Australian soap stars.

In 2002, the original Hayley from Home and Away released her debut single 'All Seats Taken'. It peaked at No. 10 on the Australian charts, and her two following singles 'On the Borderline' and 'A Matter of Time' both cracked the top 30.

The 'All Seats Taken' music video is a real blast from the past. Why was precisely everything in 2002 was set in a bowling alley?

I also just can't with these lyrics:

Jennifer Love Hewitt has released four studio albums, but you'll probably only recognise the above song off her fourth BareNaked, released in 2002.

The song peaked at six on the Australian chart, its highest charting in the world. Australia... are you okay?

The vocals and music video is very early 2000s, but the lyrics are timeless:

They say persistence pays off, but Heidi Montag has released one album, three EPs and five singles.

Released in 2010, her album Superficial sold 1000 copies in its first week, which is... not good, but it's gained a cult following since then because of course it has.

The single of the same name is all about how she doesn't care about negative attention because "I'm sexy, famous and I'm rich".

Of all of these, I think Naomi Campbell's foray into music has me the most shook.

She released an R&B album named babywoman in 1994 and the album cover is a photo of her shaving her legs while sitting on a toilet.

The album didn't take off in the UK, but Japan loved it - she sold more than a million copies there.

I also just feel like it's important to say she was featured on a single with VANILLA ICE in 1991. Huge 90s energy.

Okay, singing supermodels is a thing.

In 2004, Tyra Banks released her single 'Shake Ya Body' which had a music video featuring contestants from cycle two of America's Next Top Model.

Critics weren't convinced by the song and questioned if she'd be able to transition into music. Spoiler alert: They were correct.

In 2018, Tyra reflected on how she spent six years trying to break into music but eventually realised it wasn't her calling.

Still, the song is not as bad as you'd expect. It totally sounds like something JLo would've released around the same time.

Fair warning, clicking play on the above video may ruin your day.

Long before he was the one New Zealander claimed by Australia that New Zealand doesn't want back, Russell Crowe was.. Russ Le Roq, a wannabe popstar wandering around Auckland.

He released a single called 'I Just Wanna Be Like Marlon Brando', which is objectively bad but also weirdly prophetic.

There were a few more singles, but none charted. According to this deliciously shady recap of his NZ music career, Crowe later became a lil... embarrassed by his alias. No idea why.

Poor Tom has since admitted in an interview that he "wasn't very good" at rapping.

When Tom Hardy said he wasn't very good at rapping, he had clearly not heard Brian Austin Green's work.

In 1996, he briefly dropped his middle name and released a hip-hop album, One Stop Carnival. It was around the same time his 90210 character started rapping too... and neither should have.

"It's like when you do your answering-machine message and you say 'God, I sound weird,'" he reflected. Yep, 'weird' is the word we'd use too.

Hey, at least they all followed their dreams.

Reply
Upvote
I bet Russell Crowe would like to bury this little gem in a very deep hole!  Terrific actor with a lovely speaking voice but this song is 💩
R
rush 2 years ago

Reply
Upvote
Oh God, I loved that Naomi Campbell song back in the day! And I'll agree, Stars Are Blind is a cracking song - although I'm yet to be convinced its actually Paris singing. That Kim K song is just atrocious, though.
S
simple simon 2 years ago

Have you seen 'Promising Young Woman'? I'd actually never heard it before, and I was thinking it sounds nothing like Paris Hilton.
R
rush 2 years ago

Reply
Upvote
2 upvotes
@simple simon haven't seen it yet, but very keen to! Its either not Paris singing at all, or its been 100% autotuned. When it came out, I don't think she ever performed it anywhere live, which is a dead giveaway.
S
simple simon 2 years ago