Earlier this week, Abby Gilmore shared a photo of herself and her two-week-old son in the shower.

But there was one thing that followers of the mum-of-three Abby couldn’t help pointing out.

The positioning of her son Mason’s foot appeared as if it was… her nipple.

It’s amazing what one little boy can do. You’ve made me relax. You’ve made me feel content. You’ve made me enjoy this time again and most importantly, you’ve made my heart feel so complete little man. Luckiest Mummy to have my 3 beautiful kids who share the strongest connection already ???????????? #2weekspostpartum Ps that’s his foot, not a nipple ????

Now, the mother of three, who previously dated AFL star Jake Stringer, has shared a hilarious response to the unfortunate optical illusion.

Sharing a photo of her partner in the bathtub, she wrote: “Ex wag photographs current boyfriend (job is irrelevant as he is just a builder) in bathtub showing body part.”

“You don’t want to miss this… swipe up to read the FULL article.” 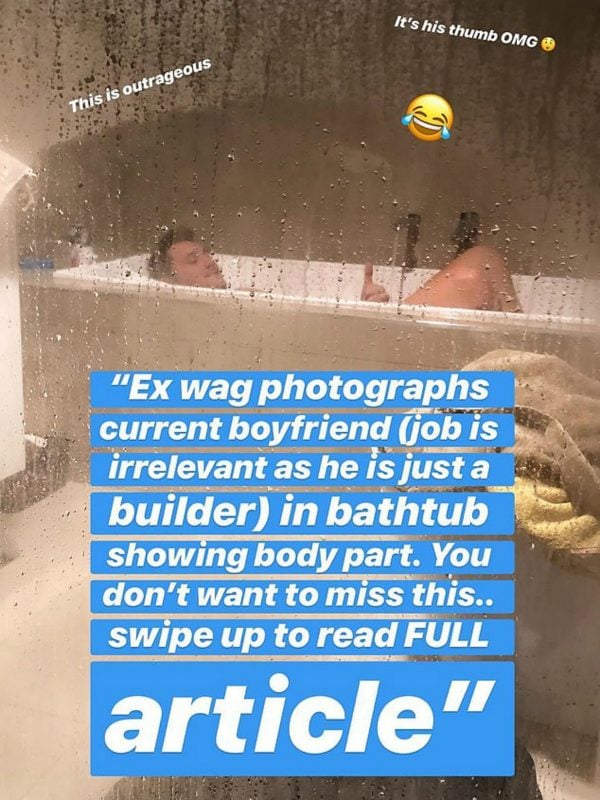 Abby also shared that her own father had even heard about the optical illusion, adding that he shouted, "Bit nippy, isn't it", down the phone.

2. Richie Strahan has finally shared with his fans where the hell he’s been since Bachelor in Paradise.

After taking a brief hiatus from social media (in other words disappearing off the face of the earth) the former Bachie has emerged and very kindly let us know where he's been hiding for almost three bloody months.

Well, at work. Which doesn't seem like a very good hiding spot if you ask us.

I’ve been working so much lately, it feels great to be home and taking some well earned R&R! Looking forward to my holidays ????

The 34-year-old ~resurfaced~ on Thursday, sharing his first photo to Instagram (AKA coming back to life).

Richie, who is a FIFO worker by trade, said he's been M.I.A from social media due to 'too much work' which is also what we tell our friends when we don't feel like leaving the house on the weekend.

"I've been working so much lately, it feels great to be home and taking some well earned R&R! Looking forward to my holidays," Richie captioned his selfie.

Earlier this month, one of Richie's Bachelor in Paradise co-stars Rachael Gouvignon contributed to the rumour mill by revealing he had ~vanished~/not posted since filming the show.

"I knew he struggled at the end so I asked him how he was going and I really don’t think he wants anything to do with the show anymore," Rachael said.

So, yep, nothing to see here.

3. “I talked about you once.” The moment Andy Lee was pranked by a Lily Allen impersonator.

A lesson to anyone who's ever considered talking about their famous ex live on national radio: don't.

(Or maybe do, because it makes for hilarious content).

Earlier this month, Andy Lee surprised and delighted audiences with a tale about a fleeting romance with none other than Lily Allen.

And now, it's come back to bite him.

Speaking again on Nova 96.9's Fitzy & Wippa this week, a Lily Allen impersonator actually called Andy pretending to confront him about publicly airing the details of their hook-up and GOOD LORD.

We would have died. We'd be dead.

"Andy, it's Lily!" said the impersonator, who was actually a woman named Sarah from Nova FM's sales department.

"I've been hearing lately that you've been talking about me quite a lot," she added.

Falling for the prank and sounding suitably mortified, Andy responded: "I talked about you once and then it spiralled out of control and I wanted to apologise if that’s caused you any stress."

We shouldn't laugh. But we are.

4. Jordyn Woods has well and truly moved on from the Kardashians with a new TV role.

But although Jordyn Woods is no longer appearing on Keeping Up With The Kardashians, the 21-year-old has landed her first acting role.

I’ve been waiting to share this with you guys but I am SO excited to guest star on this season of #grownish ???? it returns June 5th on @freeform ✨ This was the first role I’ve ever booked and I was nervous at first but I got past that and had the best time???????? take risks and stay consistent to your journey, you never know what the world has to offer✨

Posting to Instagram, Jordyn announced that she's landed a guest appearance on an upcoming episode of black-ish spinoff, grown-ish.

"I've been waiting to share this with you guys but I am SO excite to guest star on this season of grownish," she wrote on Instagram.

"This was the first role I've ever booked and I was nervous at first but I got past that and had the best time. Take risks and stay consistent to your journey, you never know what the world has to offer."

Jordyn will play a freshman student called Dee, who is a "sweet soul with a soft-spoken and sincere vulnerability".

5. "Kylie's this perfect human being and I'm not." Dannii Minogue on being compared to her older sister.

“It’s really annoying. I remember there was a lot of stuff written about my weight and comparing my size and physique to my sister and the general crux of it was Kylie’s this perfect human being and I’m not.”

This has been Dannii Minogue’s reality for 47 years.

Constantly compared and critiqued against her older sister Kylie.

You only have to watch her reaction when Anh Do, on his ABC program Brush with Fame, asks her about the constant comparison to understand her boredom with it.

“It’s soooo annoying Anh,” she groans when he dares to bring it up.

“I guess I am lucky that I was like a feisty character I didn’t have a problem with it,” Dannii told Do.

“I probably would have had some kind of eating disorder and some really bad mental issues dealing with it. I’m just glad I am a strong person. Maybe in a way… you’re attracted to this job… cause you’ve got to have a thick skin,” she hypothesised.

Personally I don't really care if someone has a nip slip or not - my bigger concern is why people find it necessary to share pictures of themselves in the shower in the first place. Further, the personal digital footprint these poor kids inherit and subsequent loss of privacy is terrible.