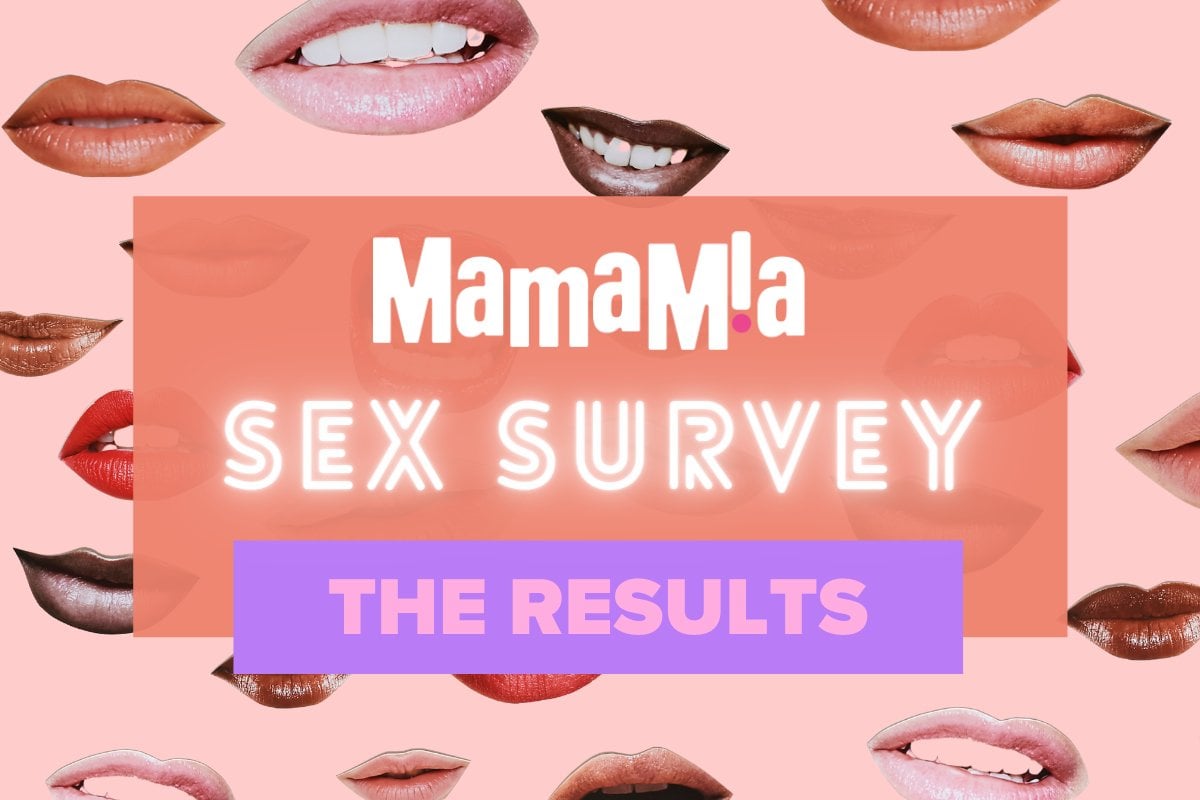 When everyone was figuring out their New Year's resolutions and setting goals for 2021, here at Mamamia we did just the same. And one of the top items to tick off was this:

To paint a realistic, honest and downright real picture of what the heck is going on with our sex lives.

So, we decided to get all ~scientific~ and coordinate a data-gathering mission in the form of a gigantic sex survey where women could anonymously give details of their sex lives.

While we were worried it would be just some enthusiastic Mamamia team members and some forced friends and family taking part, we're damn delighted to report that over 1000 women shared their stories - allowing us to properly paint that picture we were so desperate to do.

AND NOW WE HAVE THE RESULTS!

So, in true Mamamia fashion, we're going to recap them. That way you can get all the honest info in one spot.

How much sex are people actually having?

This is the age old question that occupies way too much of that awkward anxious part of our brains. And why? Because approximately everyone on earth has lied about how much they’re getting jiggy with it.

Either people are having little to no sex with their partner and bulls**t to say they’re having more. Or rampant couples are having heaps of sex and watering down their stats so people don’t 'judge' them for doing it too often.

But because we like to myth bust the heck out of things at Mamamia, we let our anonymous sex survey be the perfect platform for people to get honest about their actual sex quantities.

So what did we find out?

Well, 38 per cent of singles are having absolutely no sex at all. And then 16 per cent are only having a shag every couple of months. 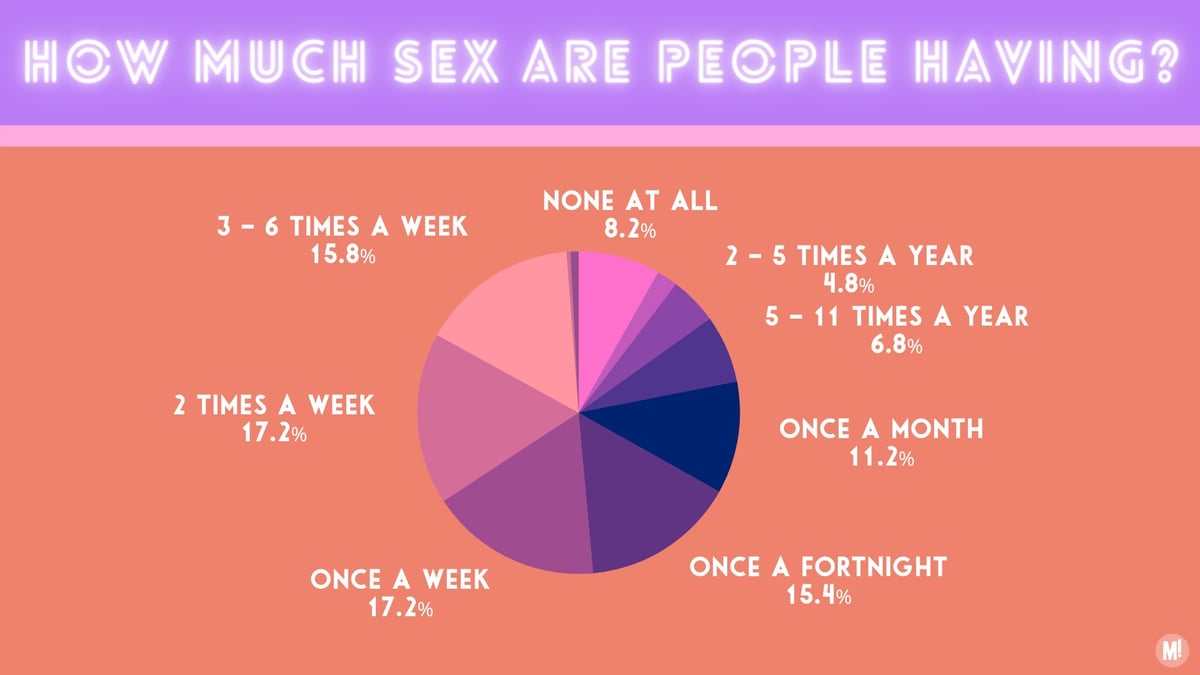 Image: Mamamia. When it comes to couples, it turns out the ‘fib’ that most loved-up people share is actually correct: The majority of them are having sex once or twice a week.

Disappointingly, the category getting the least amount of woohoo time is women in their fifties. Around 18 per cent of these wonderful women reported having no sex at all.

Obviously there is one major (potential) roadblock that needs to be raised in this segment: Kids. Children aren’t famously known for leaving their parents alone so they can ~reconnect~ with each other in the bedroom, but we are delighted to report that kids are not lowering sex stats at all! In fact, having a bonk one to two times a week remains the same across parents and non-parents.

What are people’s real sex number?

One of those awkward questions that people ask each other during dating shows like MAFS that make us cringe super hard. Because there is literally no correct answer.

...But there are honest answers: And we have them all.

Most people (we’re talking about 13 per cent of the 1000 women surveyed) have slept with between 11 and 15 people in their lifetime. Coming a close second (at 11 per cent) is the ‘I’ve slept with more than 35 people’ bucket. 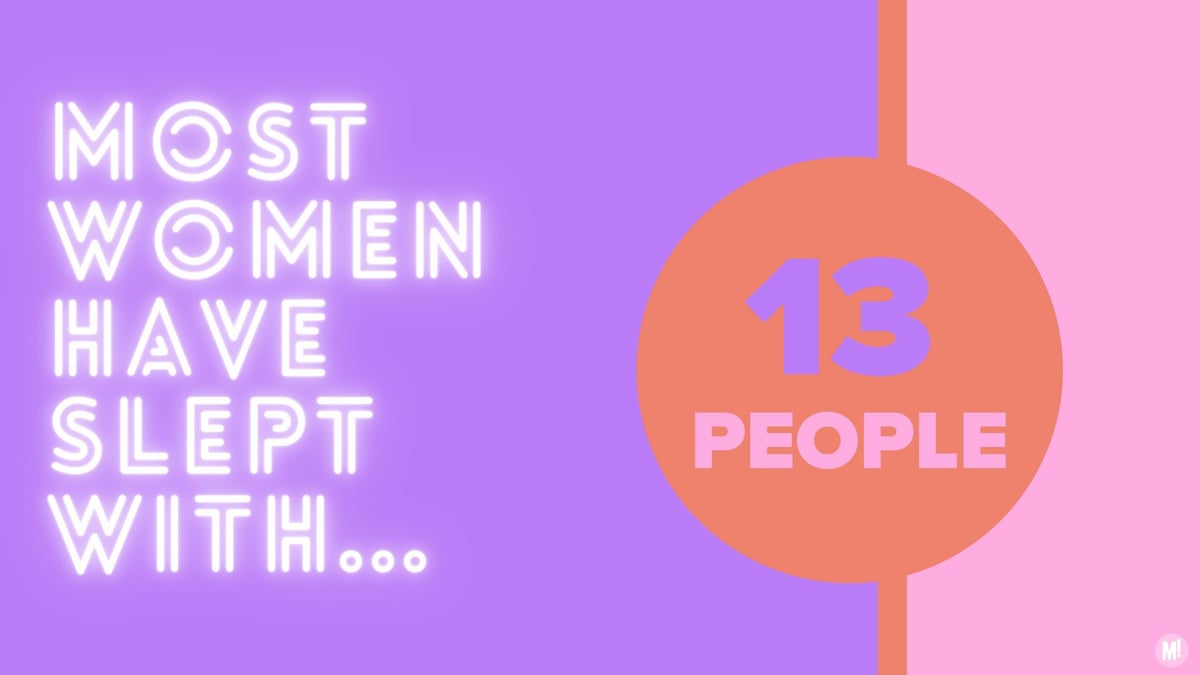 43 per cent of singles report having slept with at least 11 people, whereas 32 per cent of people in a relationship have tallied that number.

Again, kids had zero impact on these results - with parents and non-parents having the same number of 11+ sexual partners.

When do people prefer to have sex?

Sexual clocks are often hard to sync up in relationships. You might be more of a nighttime sex fan, while your partner prefers a shag at the crack of dawn. It’s tough, we know.

And unfortunately, the stats don’t really clear anything up. In fact, 40 per cent of people prefer sex before bed while an equal other 40 per cent don’t care when they have sex - as long as they have it at some point!

The only trend we can yoink out of the data is that those in a relationship tend to prefer pre-bed sexy time, with 42 per cent clocking that as their fave time.

Of our respondents to the Mamamia sex survey, 31 per cent logged one or two wanking sessions per week. 15 per cent clocked a once-a-fortnight vibe, and 14 per cent preferred a monthly go. 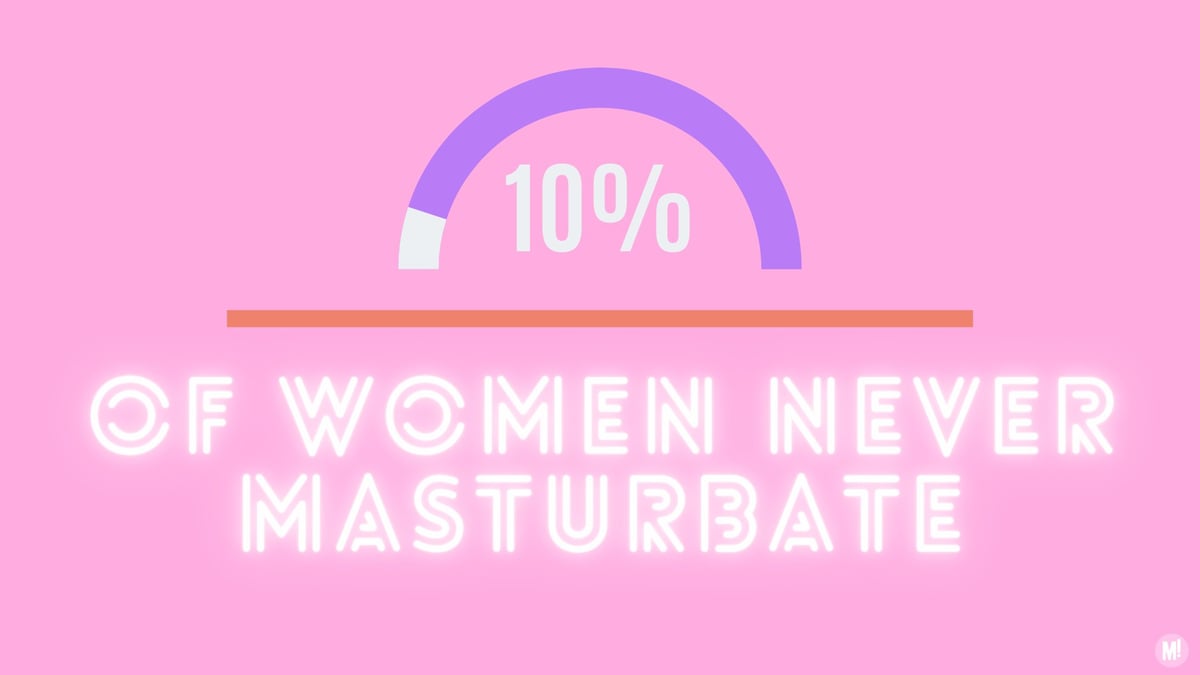 So, to clear things up, here’s a little snapshot of what we're actually doing during a solo session:

Quick, have a listen to The Undone, where hosts Lucy and Em discuss what exactly a 'normal' sex life looks like. Post continues after podcast.

What surprising things are arousing the nation?

Just out of complete nosiness, we asked 1000 women what was something that they found surprisingly arousing? While a fair few said “doing this survey” (to which we say, thank you), these were some of the surprising answers:

Okay, let’s dive into who people want to be having sex with… because, fun! 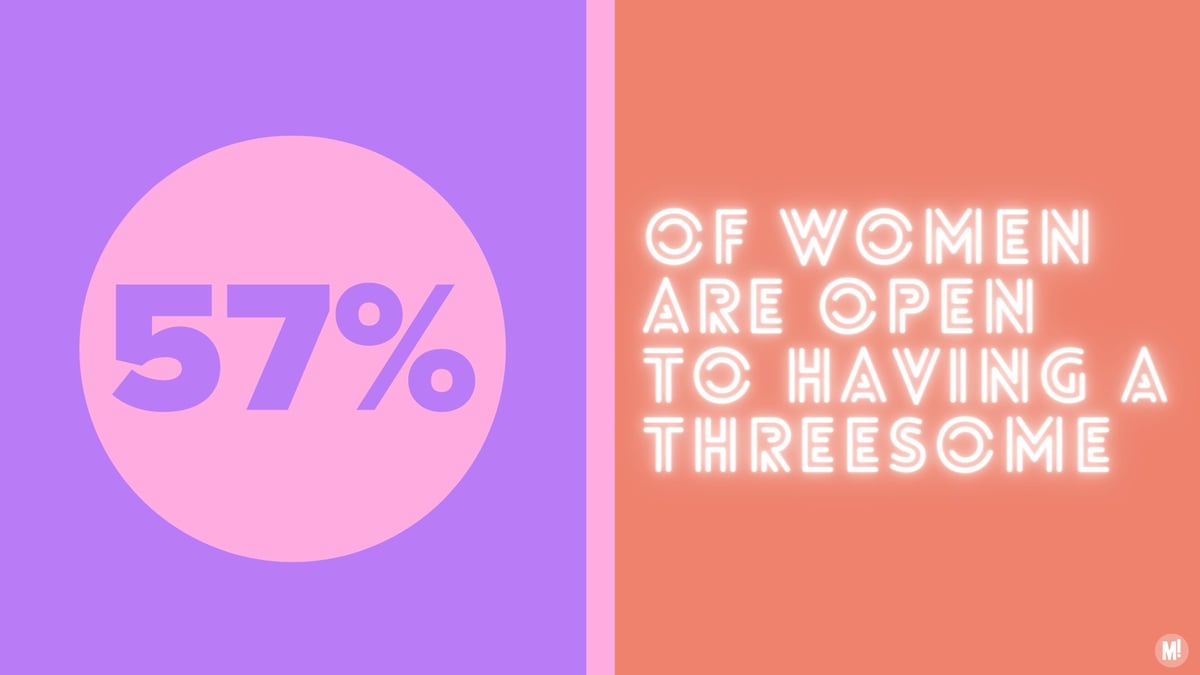 In terms of combos, most people are leaning towards the preference of one guy and two girls (at 57 per cent) and 36 per cent seeking out a one girl and two guys deal.

Single people were also way more interested in threesomes, with 57 per cent registering an interest in them, while only 36 per cent of coupled-up peeps were looking for a third person in the bedroom.

Where are people actually learning about sex?

Do women need to orgasm for sex to be considered ‘good’?

Speaking of, when do people have their first orgasm?

Based off the Mamamia sex survey results it seems that most people tick this milestone off pretty young. 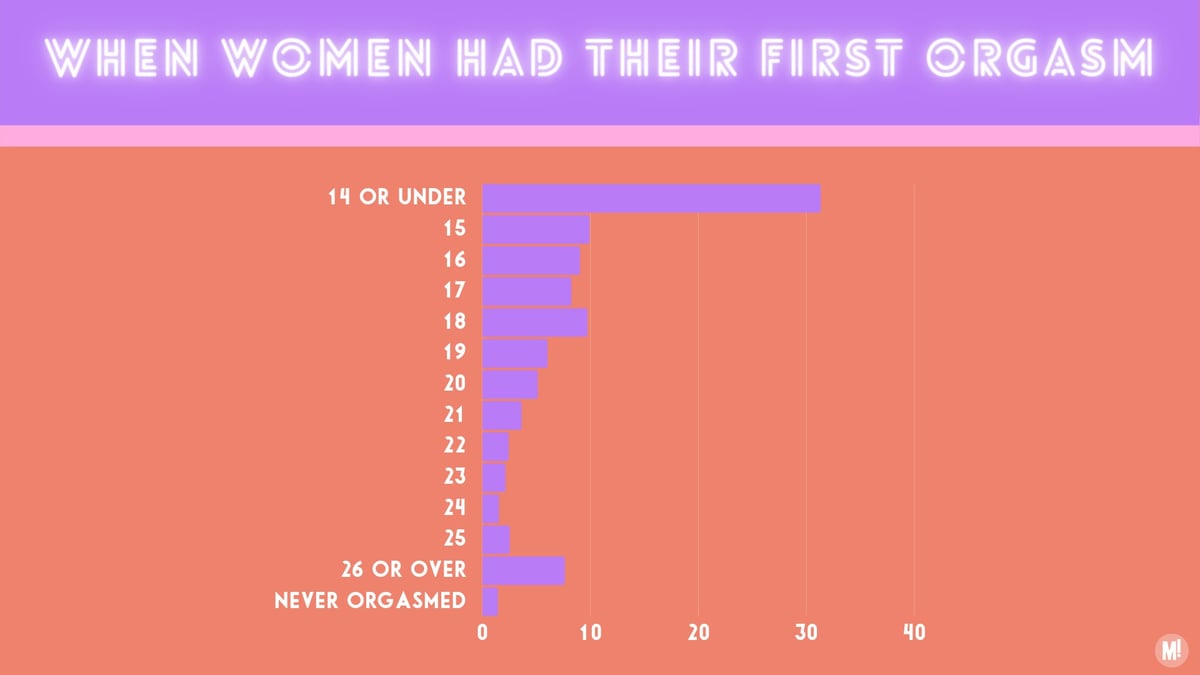 In fact, 31 per cent of people have had their first orgasm before they turn 14 years old. And that was shortly followed by 48 per cent who had ticked it off by their 20th birthday.

How many women are actually using sex toys?

One of our personal passions here at Mamamia, because this space has injected so much creativity, clever design and delightful features to make a woman feel damn satisfied. Plus, a lot of Lady Startups are in the space, and boy do we love to see that.

And it seems we’re not alone in this fandom! In fact, over 81 per cent of the women surveyed own and regularly use a sex toy. 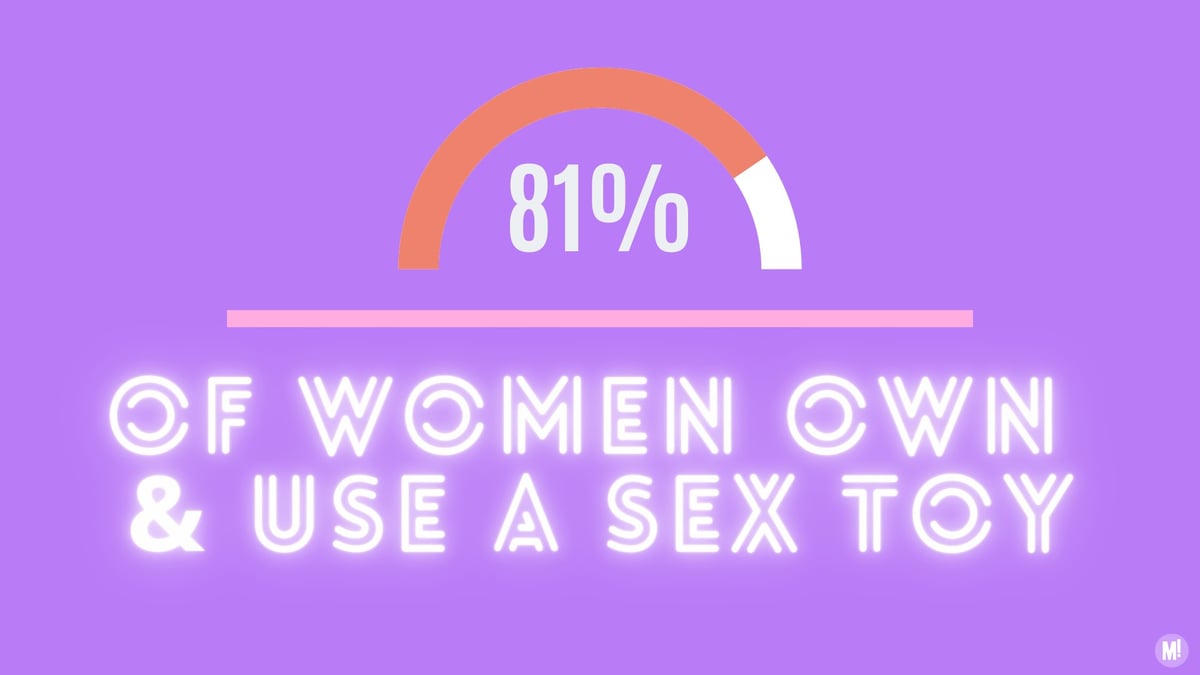 While there were enthusiastic users across the board when it comes to sex toys, those in the age 16 to 24 bracket were actually the least likely to use a sex toy.

Is period sex really a dealbreaker?

Based off our results, it seems that periods certainly aren’t holding people back from having sex - as many may assume. Instead, it’s just causing people to readjust how they’re doing it and at what point in their period they are sleeping together.

So what does that mean exactly? Well, let us tell you….

40 per cent of women are down for period sex, as long as it’s not during the high-tide segment of their period - if you catch our drift.

22 per cent of women are down for sex on their period, regardless of what point in their cycle they’re at.

38 per cent of women are a firm and constant NO on the period sex front. 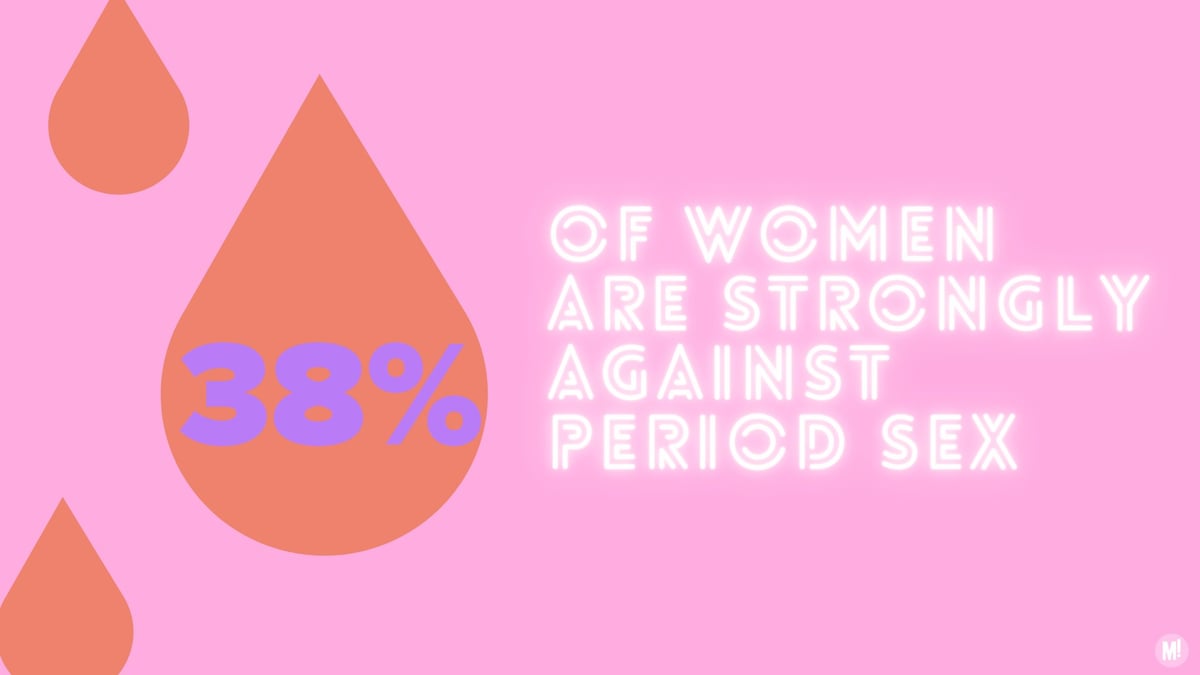 Regardless of where you personally stand in that lineup - any and all (and changing your opinion on it) is all completely valid. In fact, this applies to all factors of this data - just in case you’re wondering.

How many people are actively using contraception right this very second?

For this result, you may be surprised to hear that 52 per cent of people currently don’t use any contraception at all. Nada. Not a single thing.

Those who are most likely to use contraception sit firmly in the age 16 to 24 bucket - tracking a healthy 85 per cent regularly using contraception. 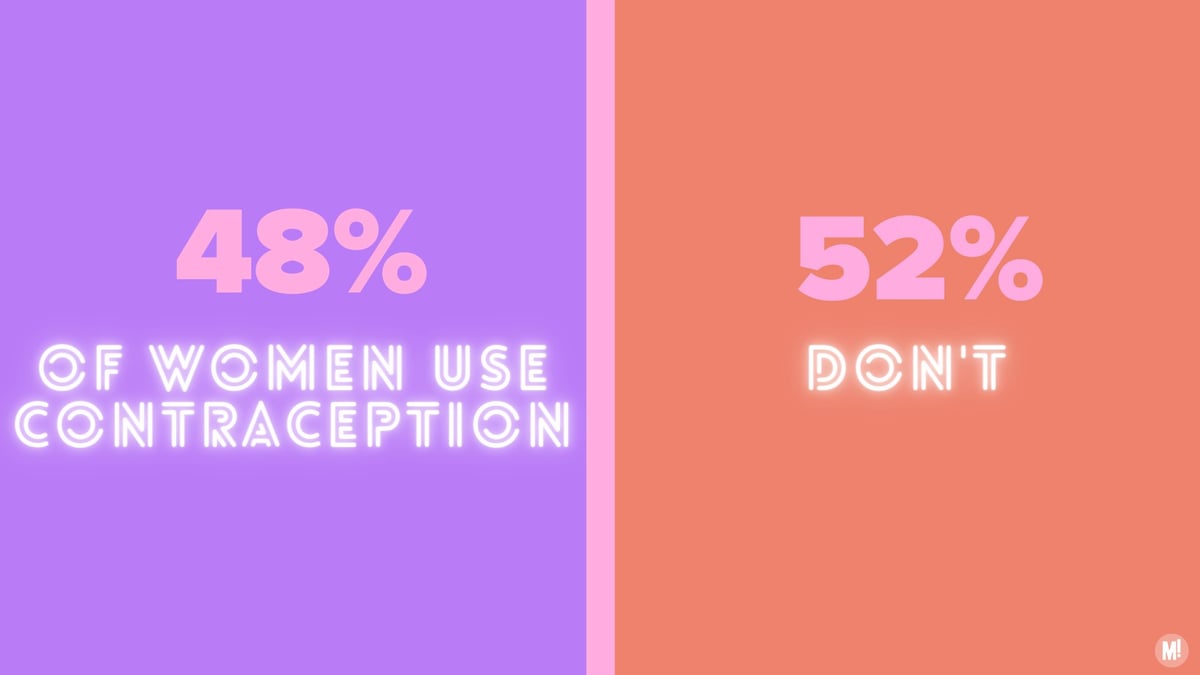 But what forms of contraception are they using? Well. That’s where things get pretty fruity.

Currently winners of the ‘most popular form of contraception award’ are: The Pill (42 per cent), condoms (33 per cent) and IUDs (25 per cent).

And what contraception you pick is very much determined by age…

Have people ever felt pressured to not use a condom?

The pressure to have unprotected sex without a condom is disappointingly rife, particularly within the 25 - 29 age bracket.

47 per cent of respondents have felt pressured to have sex sans condom, and while singles are more likely to deal with this conundrum, 46 per cent of those in relationships have also dealt with condom-pressure too.

How many people use lube?

With benefits of smoother, easier and less painful penetration, lube is almost always a welcome addition to any bedroom session. But it turns out only 49 per cent of people use it - leaving over half the respondents going at it dry or relying purely on their natural juices. 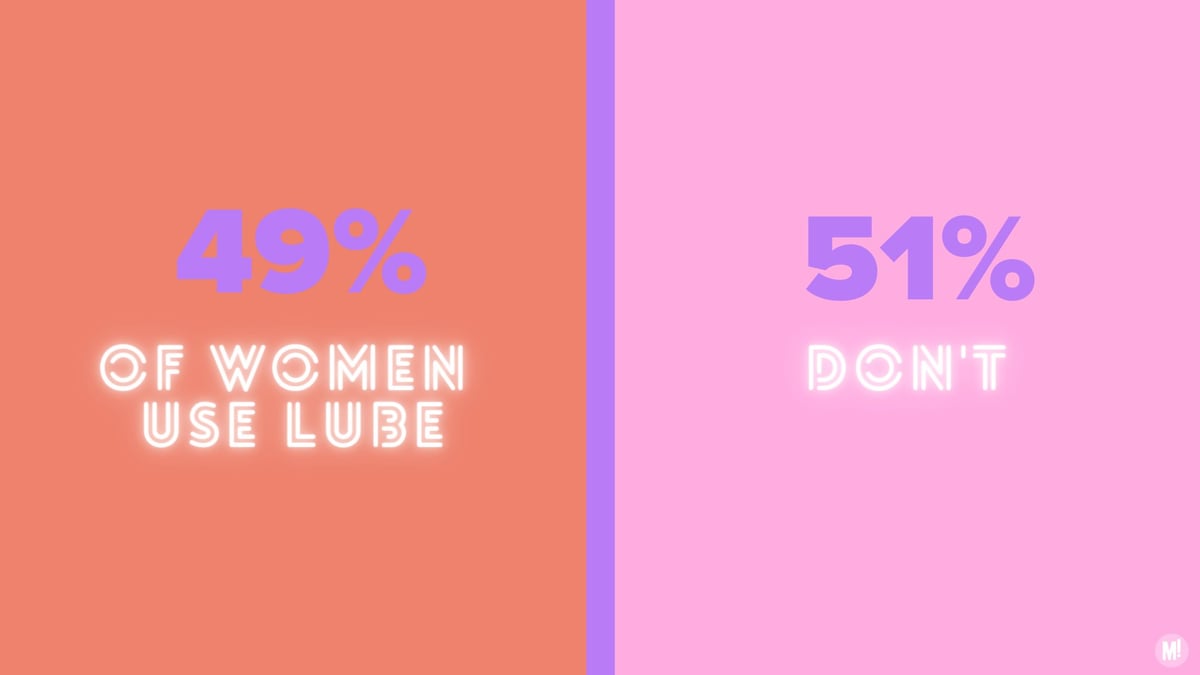 Ah. One of our favourite questions to ask and let people answer anonymously. Why? Because they don’t hold back.

Among the most popular responses of what people wanted to tick off in the bedroom, was (as previously mentioned) THREESOMES. But beyond that, here’s what people are keen to try next…

What do women NEVER want to do in bed?

To see the flip-side of things we asked 1000 women what they never want to do in the bedroom, and there were a few repetitive answers that popped up.

Listen to Overshare, where Kelly, Lem and Flex discuss the art of the booty call. Post continues after podcast.

Consent was also a consistent theme, with people saying they would never “keep going when their partner says stop” or “hurt my partner. Even if they begged for it”.

What do people wish they were told about sex before they started having it?

The fact is most people dive into sex before they’ve really learned that much about it. The pearls of wisdom from friends often comes in the aftermath of disappointing sex, rather than before. So we asked 1000 women what they wish they were told about bonking before they started doing it.

Here’s some of our favourite responses:

Do you have questions about sex that YOU want answered anonymously? Send them into our Sex Editor - [email protected] - and she’ll do the research for you.