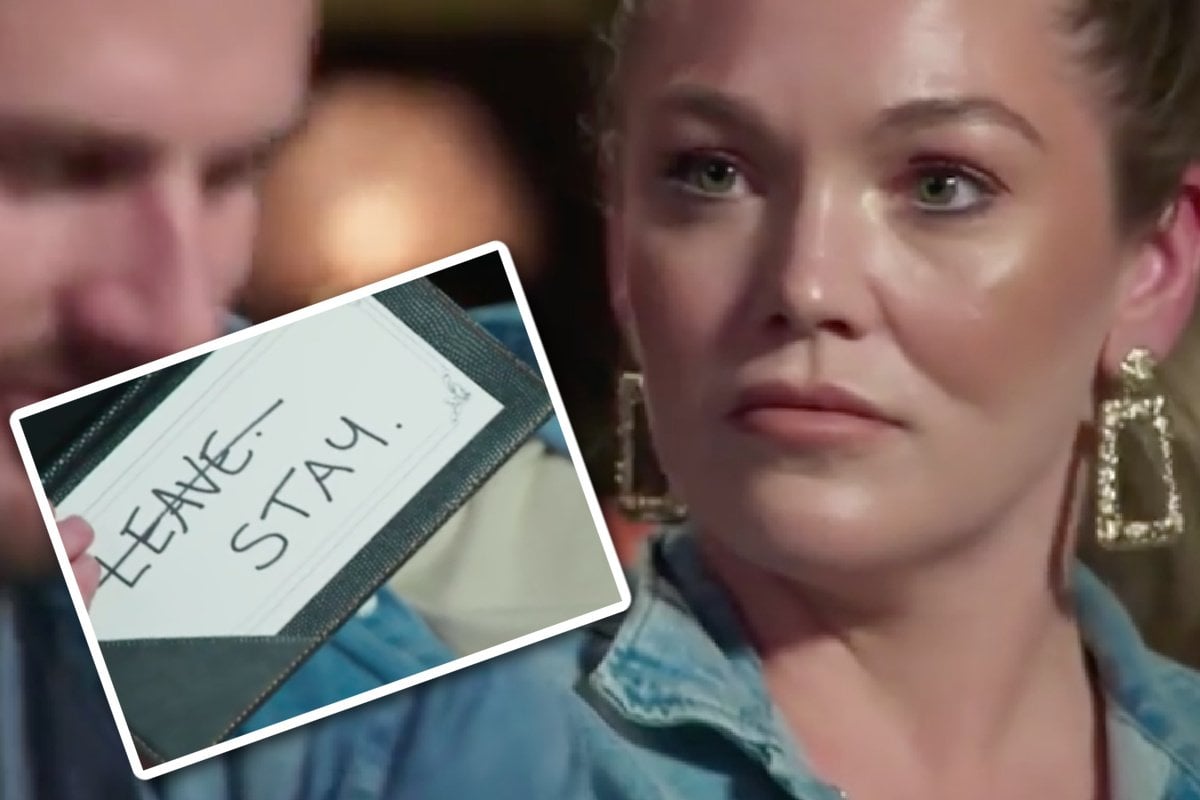 We open on Alana and Jason being amicable again ever since there's gossip that urgently needs to be discussed.

It's Booka and Brett. They did a lot of yelling at the dinner party about the time Patrick wrote hate mail to Booka that wasn't even anonymous.

The morning after, they're waking up in separate apartments and Booka gets a dirty glass out of the dishwasher and drinks water from it and okay things are bad but they're not... that bad. 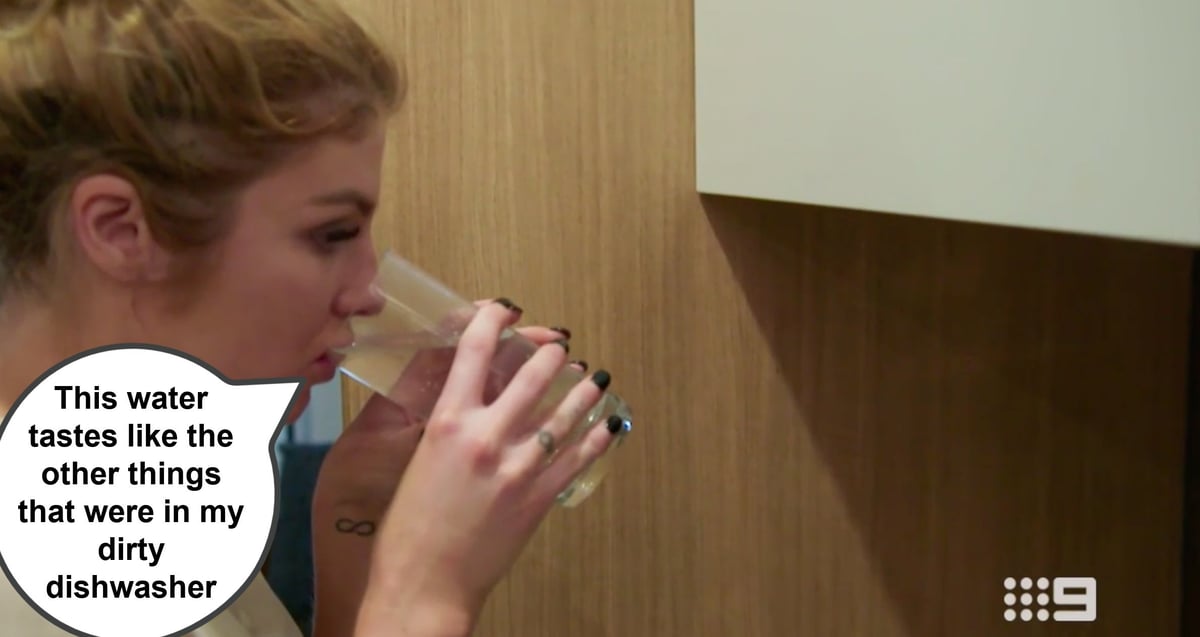 Brett tells the camera that all he wants is for Booka to be more light-hearted and fun about him/Patrick calling her self-centred but also arrogant. Is that too much to ask? (Yes).

And then there's Melissa. Who can't stop crying.

She knew that Bryce had told Bec she was the hottest woman in this experiment. But last night Bec suggested that it was said in a flirtatious tone and pause.

Didn't we all just... assume Bryce was flirting with Bec when he approached her alone in the gym and told her he thought she was hot? Was that not... implicit? Did Melissa think he was just relaying facts to the nice woman in the gym?

As far as Bryce is concerned, this is a fight solely between Bec and Melissa and MATE NO ONE WOULD BE FIGHTING IF YOU WEREN'T A) FLIRTING AND B) BRAGGING ABOUT YOUR SECRET GIRLFRIEND TO STRANGERS.

But it's TIME for the Commitment Ceremony and omg let's skip Patrick and Belinda and get straight to Bryce being f**ked up.

First up are Liam and Georgia. Georgia tells the experts about how when it came to the photo ranking task, Liam ranked Kerry first and like she's so fine with that she'd just love an explanation.

Narrator: She was not 'fine' with that.

Liam explains that he's used to girls he can take back to the farm and roll around in horse shit and no one... wants. That. Including but especially Kerry. 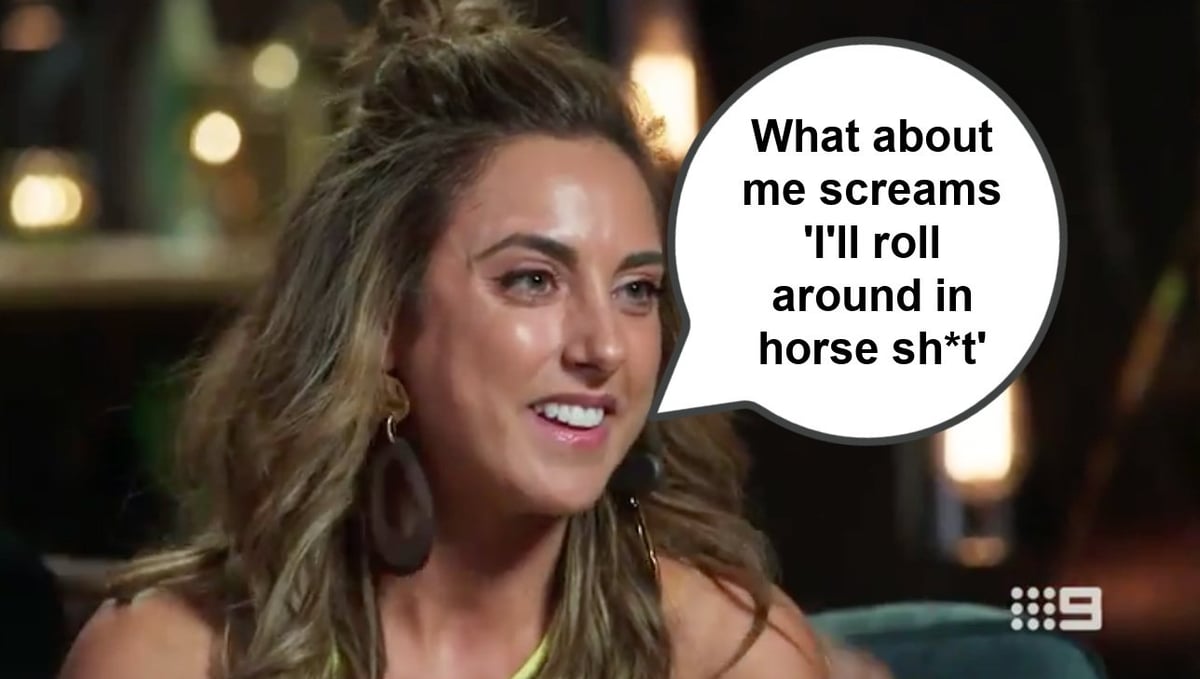 "Dude wtf." They decide to stay and okay great is it Bryce's turn yet Y/N.

Next up are Johnny and Kerry who aren’t contributing to the drama and/or the gossip but… fine.

But SHUT UP BECAUSE IT'S BOOKA AND BRETT AND JOHN AIKEN IS BEING RIDICULOUS.

"Take me through the week - highs, lows," he asks, before declaring, "the energy feels tense" and no shit, Sir. You were watching from inside the cupboard last night you literally saw what happened. 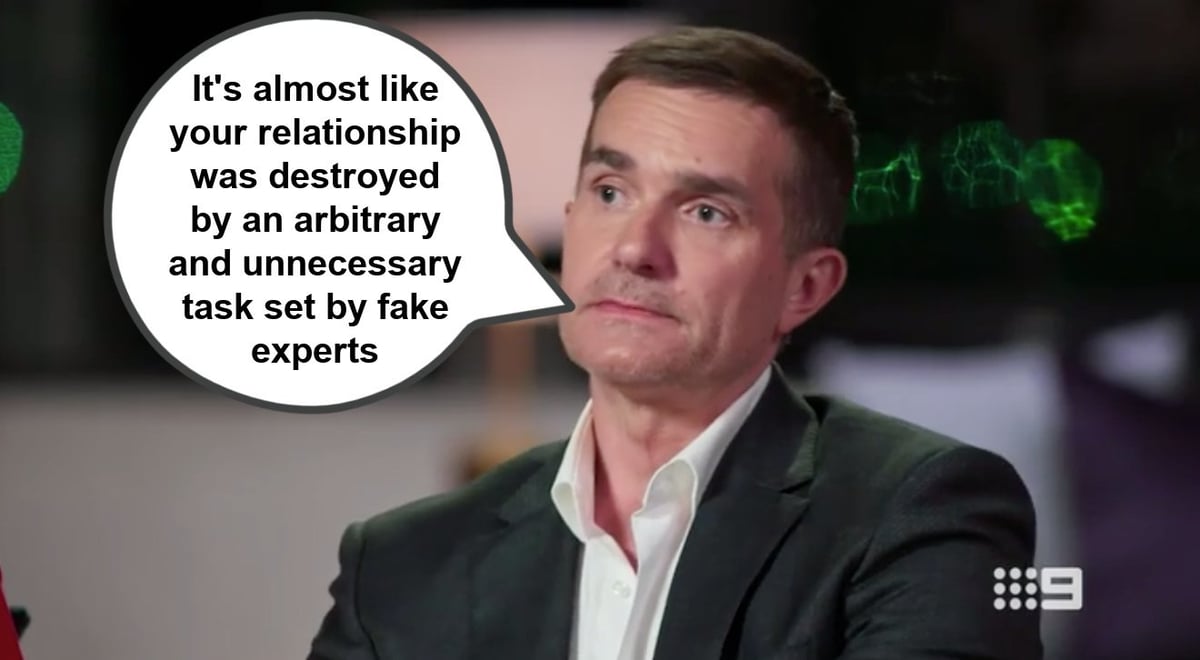 "At least the task was otherwise useful." (It wasn't).  Brett says he feels unnoticed but also underappreciated in this relationship, before reasoning that Booka is probably just upset because of how much she likes him and we feel like that's not...

John asks Booka to say nice things about Brett and she doesn't want to do that given that she hates him.

Ultimately, Booka decides to leave and lets out a sigh of relief.

John says through gritted teeth that they are "very. well. matched" because he recalls he tried very hard with this match, even getting up to move from one side of the table to the other. 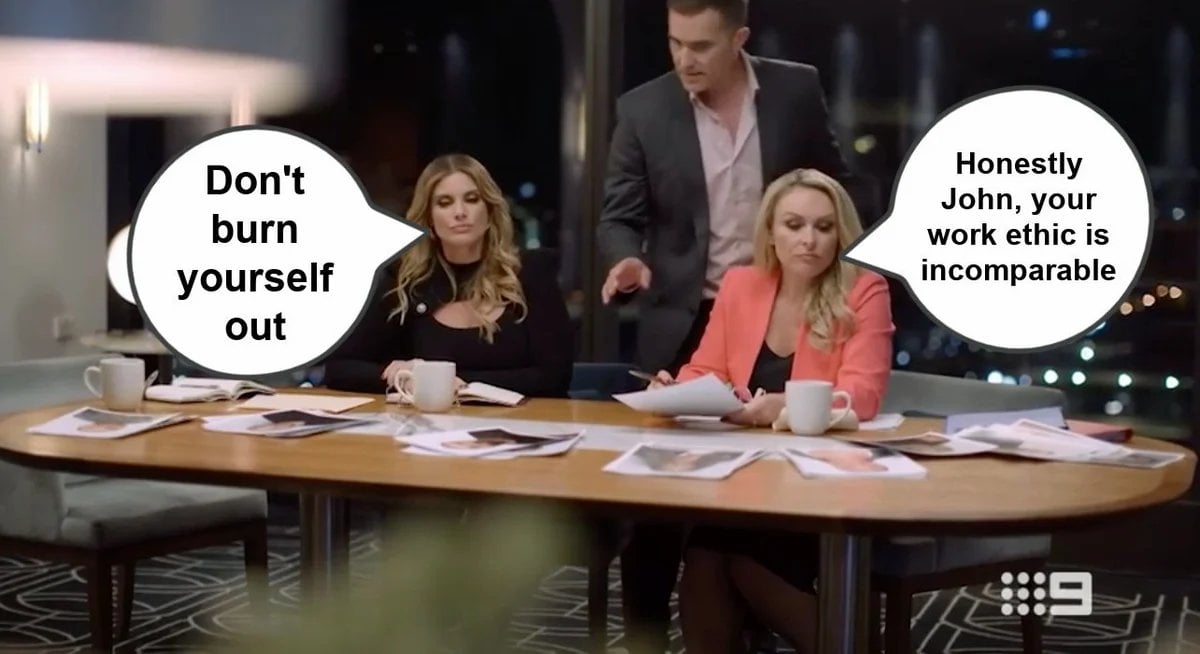 "They don't call me Sir John Aiken for nothing."  Luckily, things are more positive with Bec and Jake. They say it's been their 'worst week yet'. In fact, they had both decided they were done with the relationship, and THEN they had to go to the movies and be yelled at by each other's parents.

But it appears there's one thing stronger than Bec and Jake's hatred for each other, and yes it's their shared hatred for Bryce.

They're asked about the intimacy and Bec shares that they "made out for an hour" while thinking about Bryce's shitty attitude which excites expert Mel very much. But this is a married couple who a) hate each other most of the time, and b) are only sexually attracted to each other when they're bitching about someone else. WHAT IS THERE TO CELEBRATE. 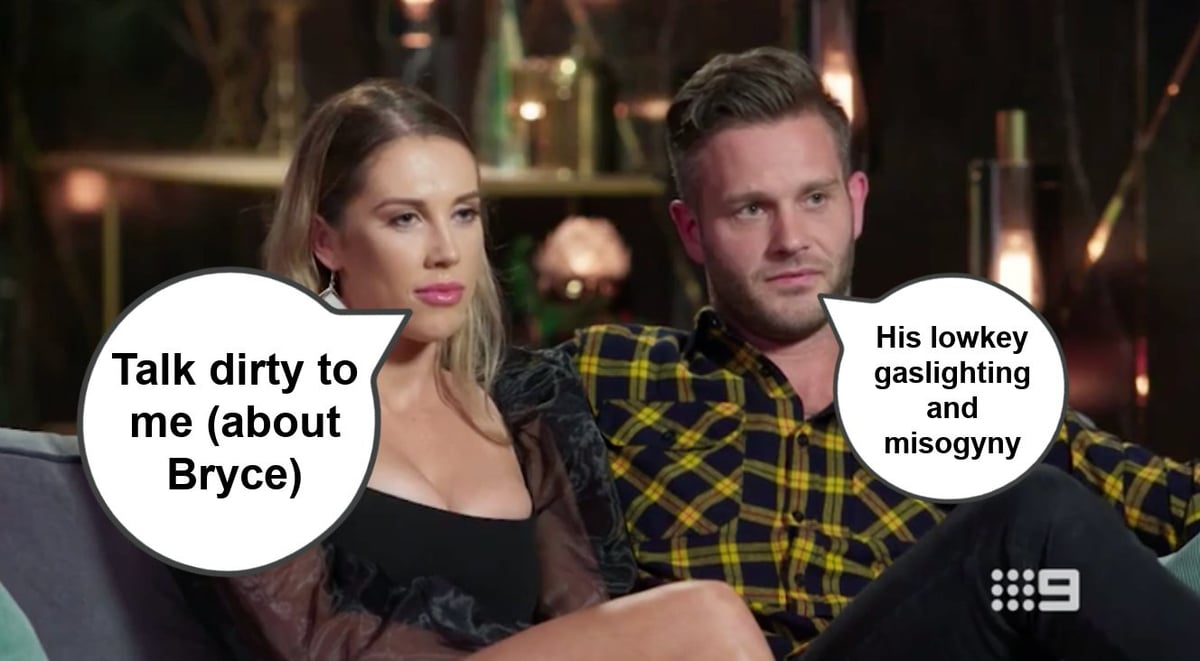 They decide to stay and that is objectively the wrong decision but play on.

It's Jason and Alana's turn on the couch, and Jason likes Alana ever since she cooked him a well done steak in her lingerie. He says he struggles to see the future without her in it (specifically cooking him red meat in her underwear), and John Aiken tells Alana it's important to reward Jason when he opens up about his feelings. FFS the bar is so low for men it's honestly astounding.

EUGH it's time for Belinda and Patrick and we're mad. ALL YOU DID THIS WEEK WAS BLOW UP ANOTHER RELATIONSHIP. AND NO ONE IS GIVING YOU NEARLY ENOUGH SHIT ABOUT IT.

The experts, however, are far more concerned with how their intimacy is progressing, and continually pester them to share exactly what sexual things they've been doing and which orifices they involve.

Eventually Patrick yells that Belinda gave him a hand job which is a very strange thing to happen in front of a room full of grown adults. 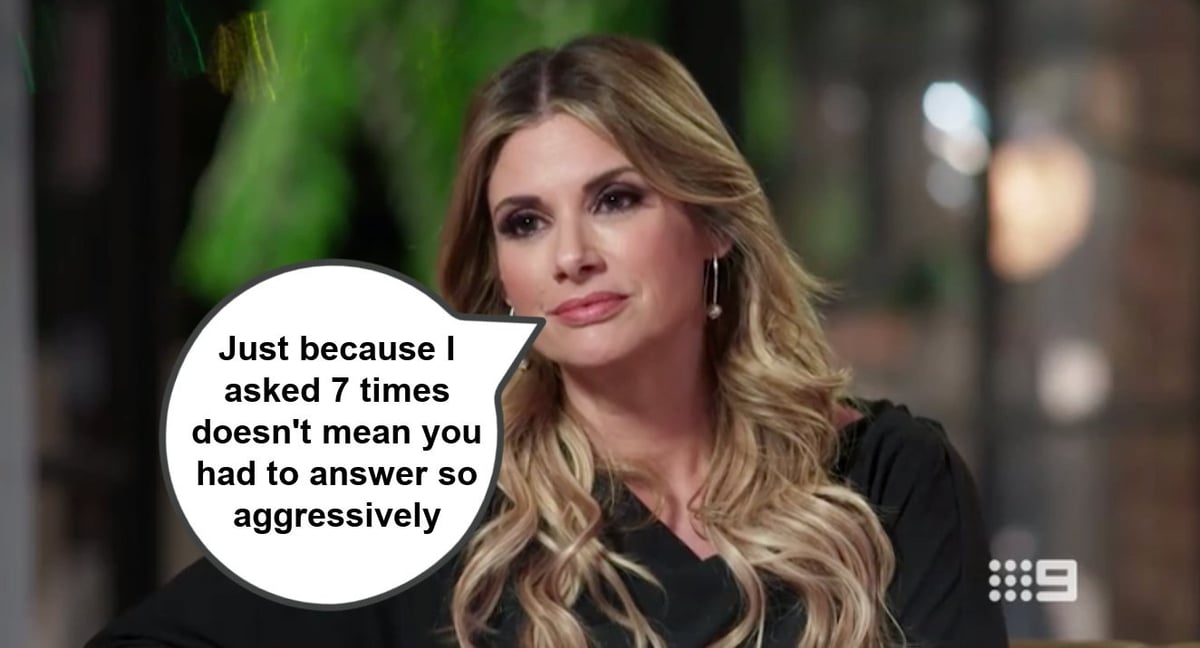 "I didn't expect you to actually tell us lol ew."

Alessandra remarks, "that's beautiful," and it's not but okay.

Her advice is for them to continue to build their connection through sexual interaction and we just don't know how comfortable we feel with couples explicitly being told to have sex? Especially when they've been ruining other people's marriages and that might also need... addressing.

But SHUT UP because it's finally time for Melissa and Bryce and yes they're in matching outfits.

Bryce tells the experts that conflict really affects Melissa, and that "she shouldn't be targeted like she was".

In fact, Bryce says he even went to the effort of googling the word 'bully' and guess what came up? A photo of Rebecca. 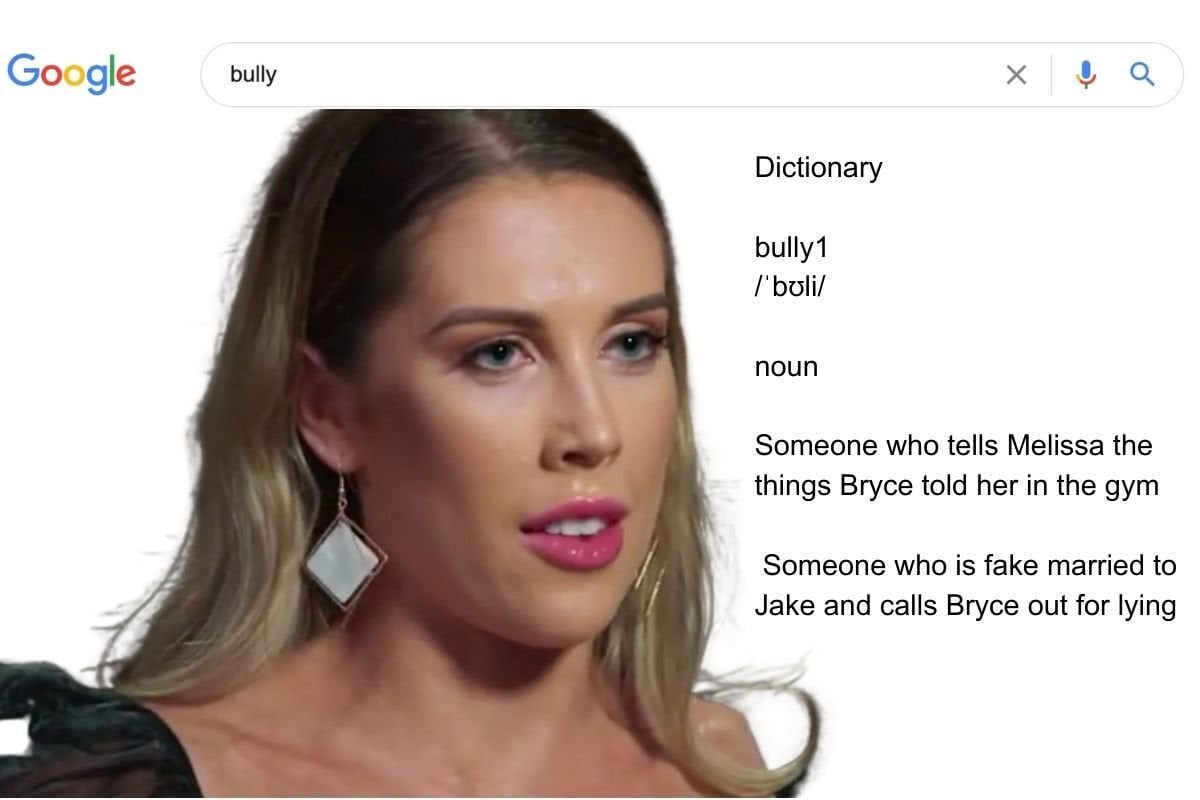 Bryce. Why does it look like you designed this Google search result in...photoshop?

While Bryce keeps sticking his tongue out at Bec and muttering rude words under his breath, Melissa explains that her greatest fear is being rejected.

She says she's falling in love with Bryce and if only there were some relationship experts on hand to intervene.

They ask Bryce how he's feeling, to which he responds: "It's a good feeling. Am I in love with her just yet? No, I'm not."

THAT WASN'T THE F**KING QUESTION. WHAT IS WRONG WITH YOU. 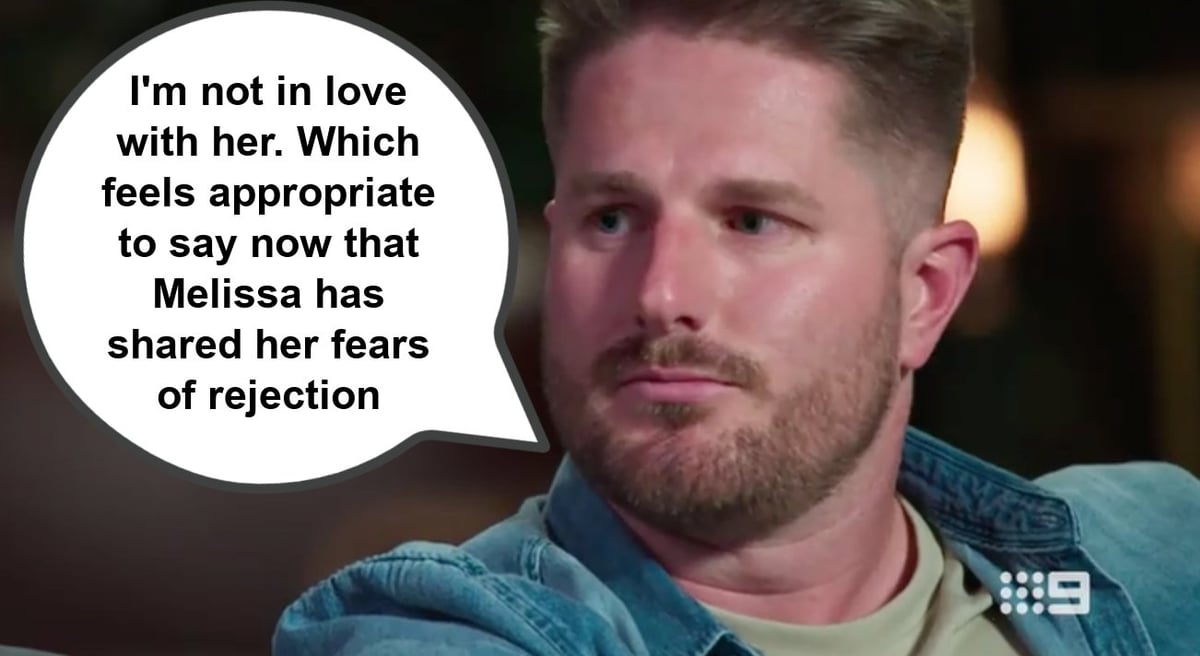 "My timing is impeccable."

"Thank you for being so raw," John Aiken says, it's great for ratings etc. etc. but now it's time for your decisions.

Melissa (obviously) writes stay and then it's Bryce's turn.

"Usually it would be a really easy decision for me," he begins and Sir what have you done.

"I've got to the point... where..." and then he reveals his card. Which says Leave. Crossed out. Badly. And then the word Stay.

And with all due respect what the actual f**k are you on about.

If you wrote leave and then changed your mind why wouldn't you get a... new piece of paper. Or turn the piece of paper... around. So you didn't have to show your... working out. 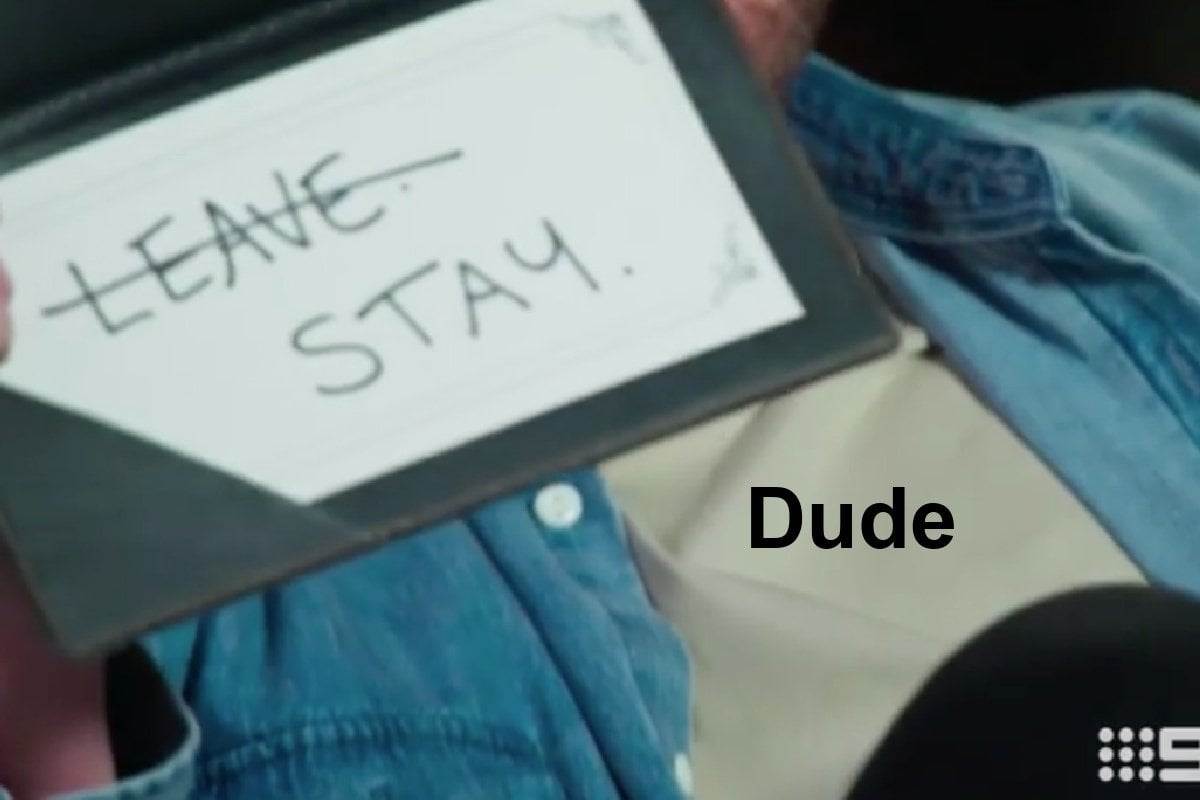 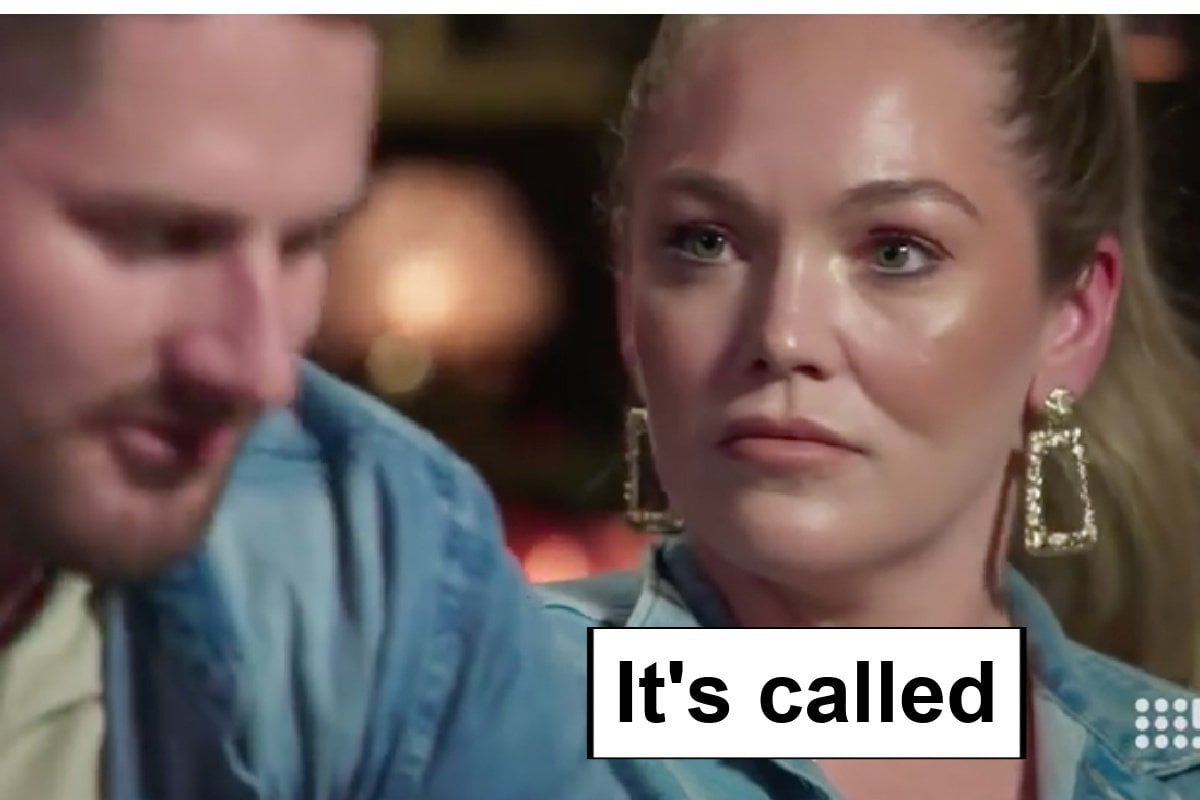 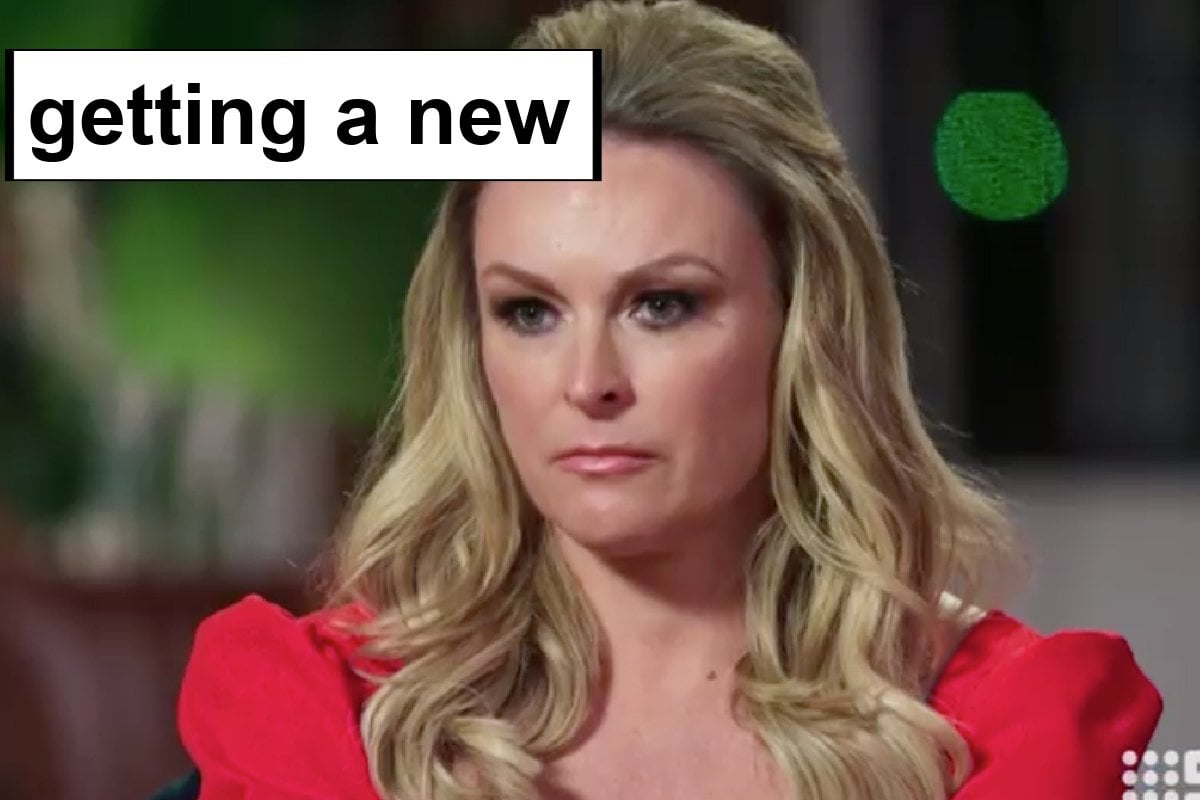 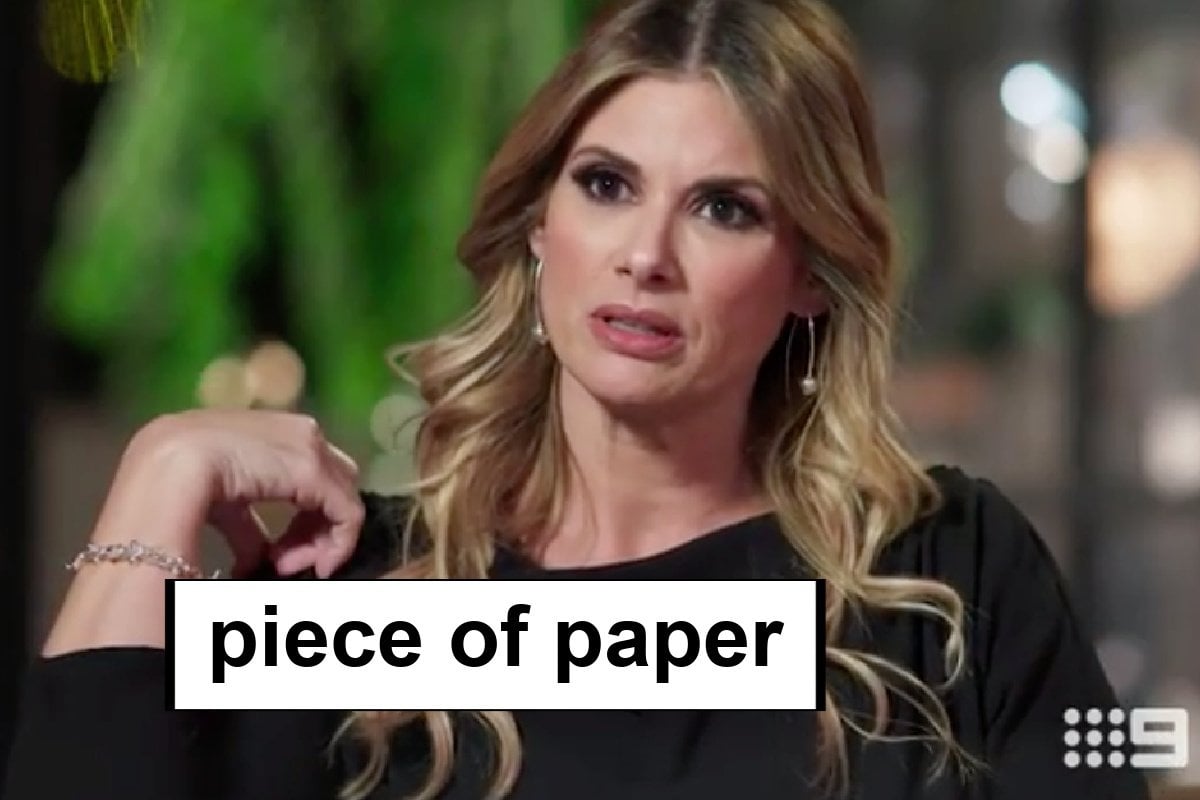 "That was tough," Bryce says and IN WHAT WAY WAS THAT TOUGH FOR YOU.

Alessandra asks what Bryce... means. Because she wants to understand his decision better.

He says writing leave was "looking out for her best interests" (??) and to get "her out of a toxic environment" and she's an adult woman and the most toxic thing about this environment is you??

He explains that he knew this would hurt her, but did it anyway. For reasons that are as yet... undetermined.

Something about... Rebecca. And... the group.

Expert Mel clarifies: "You made that call, fully understanding that it was going to hurt her?" and Bryce reiterates yes that is correct, Mel. And yes it was tough FOR HIM. And if someone around here could have some empathy, that would be appreciated. 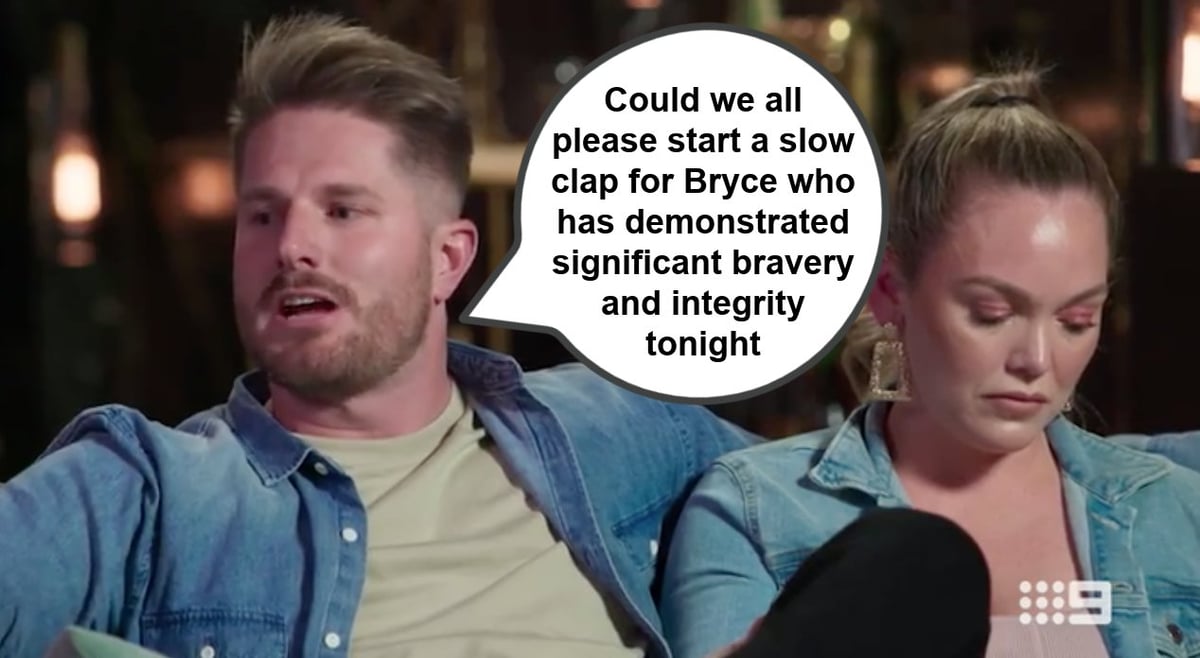 The rules of this (fake) experiment state that if one person says leave and one person says stay you have to stay, so there was precisely no reason for Bryce to write leave at all except to f*ck with Melissa.

But it's time to move on because the couples are going on a RELATIONSHIP RETREAT together which doesn't seem at all COVID safe or appropriate given the broken state of precisely everyone's marriages.

The Twins recap Married at First Sight ep 19: Booka just learned how much her husband dislikes her.

The Twins recap Married at First Sight ep 18: When you break up in front of your parents.

The Twins recap Married at First Sight ep 17: The most tone-deaf groom in MAFS history.