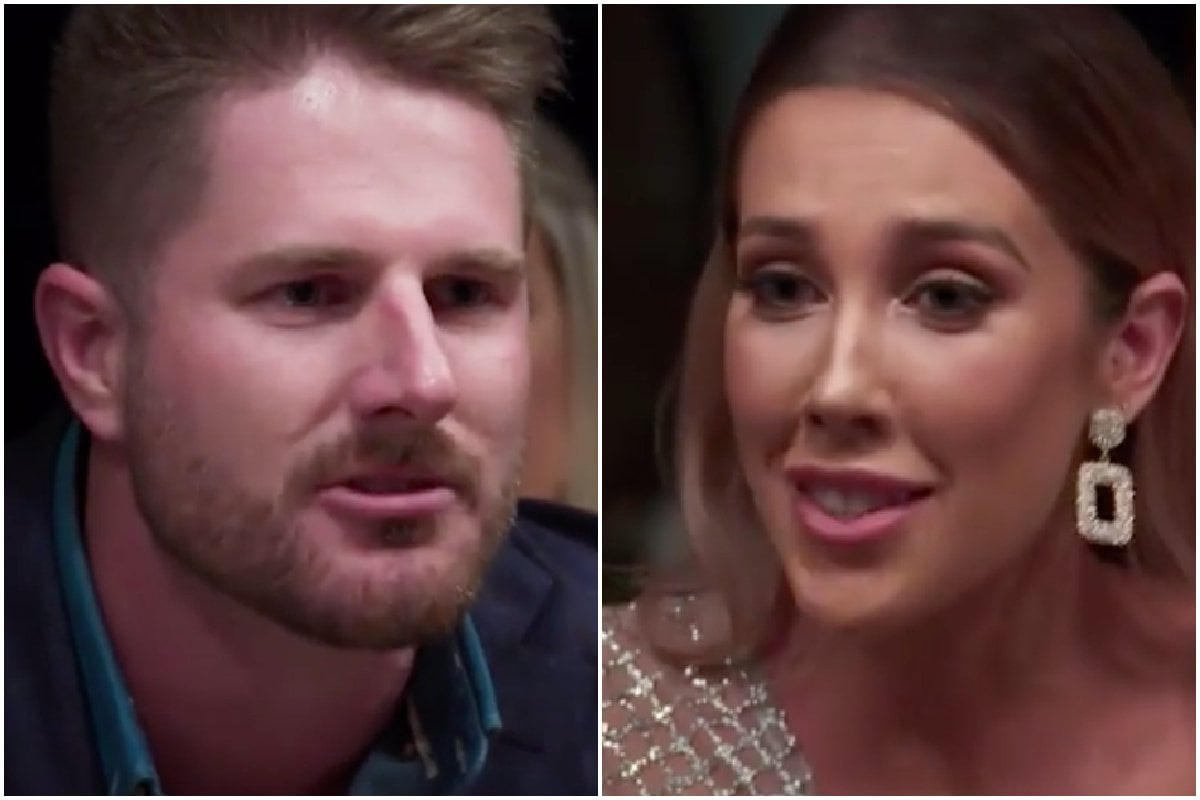 We open on Belinda and Patrick developing their own love language where they quack in each other's faces in the morning and honestly this is by far the most normal relationship behaviour we've seen on this show.

Maybe they can bitch about Bryce. In duck. At the dinner party. And Bryce won't know what they're saying. Unless he also speaks duck. Which would be a real plot twist.

But EXCUSE US because there is a RUMOUR which is our SINGLE FAVOURITE THING.

Belinda and Patrick discuss the rumour, which involves Bryce, while Patrick straightens her hair. Very carefully. It's ridiculous. 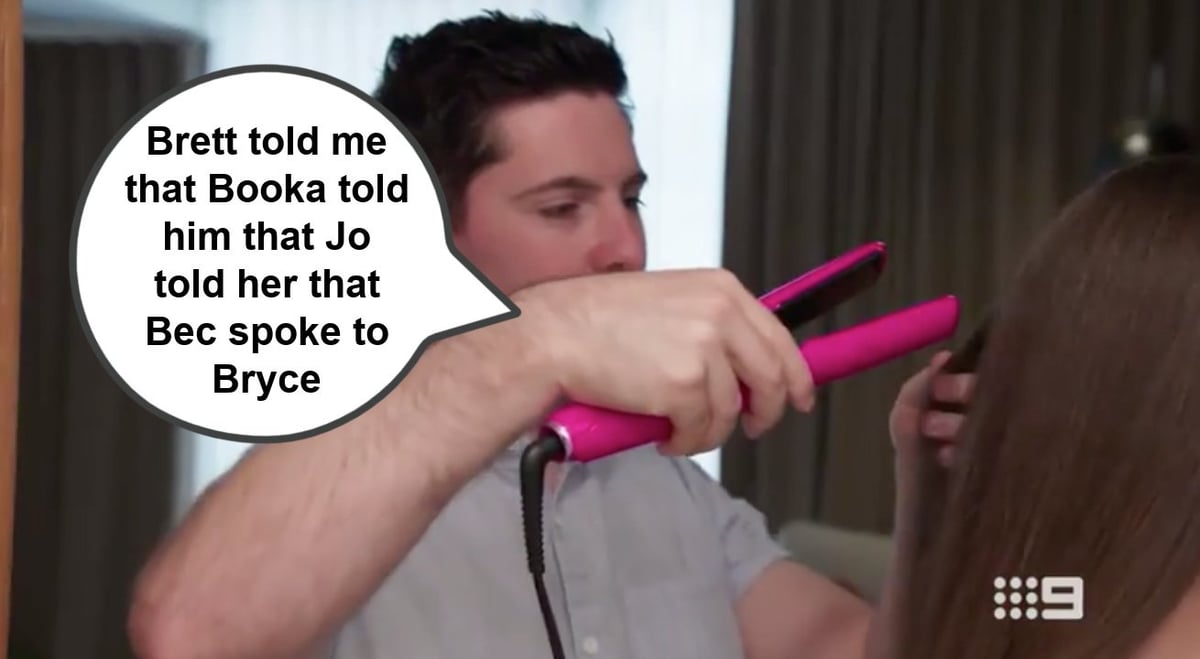 "Bec was in the gym, when Bryce told her about the secret girlfriend." But Jason decides that maybe he should ask Bryce directly about the rumour, given that everyone's talking about him. Honestly, that never even crossed our minds as a possible thing to do… we just wanted everyone to bitch about him some more??

Jason tells Bryce that everyone in the experiment believes he has a girlfriend "on the outside" and asks if there's any truth to it.

Bryce's first concern is where the rumour came from and sweetie don't you worry your little head over that. 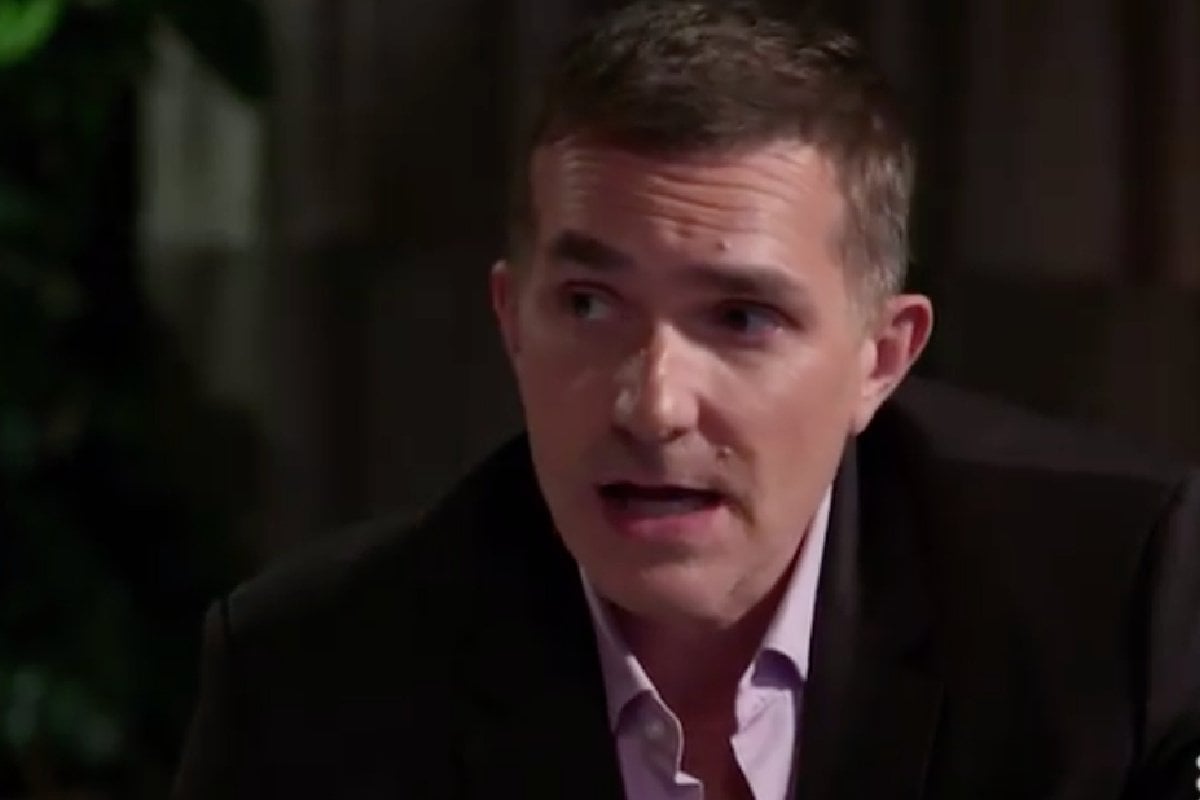 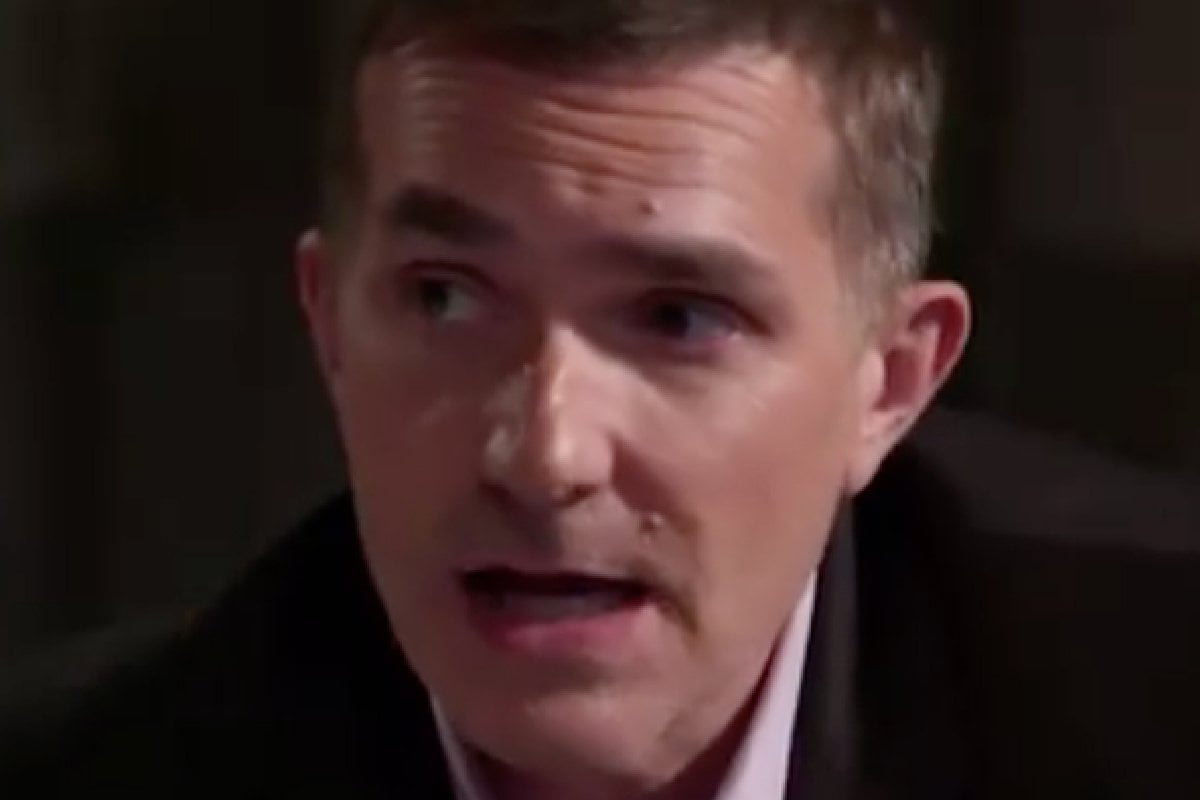 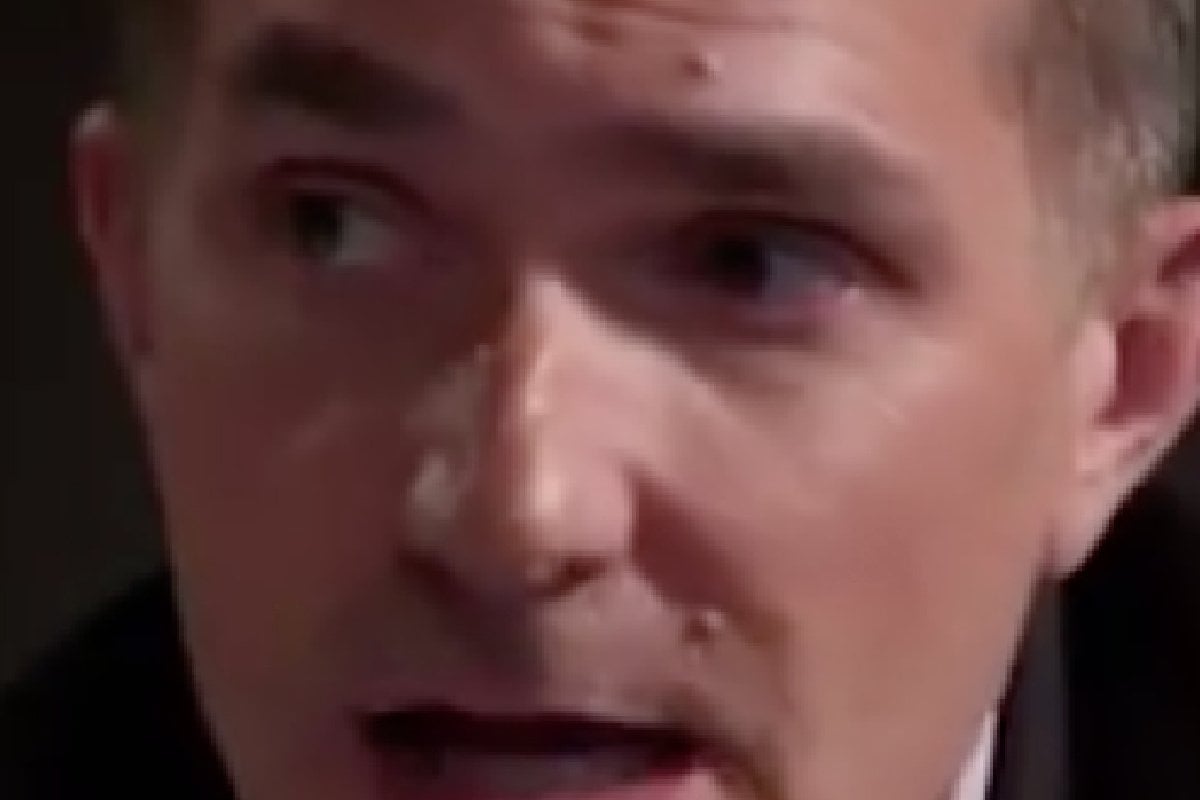 He reasons that it's probably one of the girls who started it because they like to "create drama and what not" and ummm the girls are significantly better behaved than you, Sir?? Last week you had a bitch fight with Sam? And called each other ugly and then you poured a drink on him?? But yeah you know how ladies are with their drama lol.

Bryce decides he should probably tell his wife Melissa that everyone has found out heard a rumour about a 'girlfriend' on the outside.

He tells her it isn't true though, which puts Melissa's mind at ease and why.

We have never been more sure of anything than we are that Bryce has a secret girlfriend. 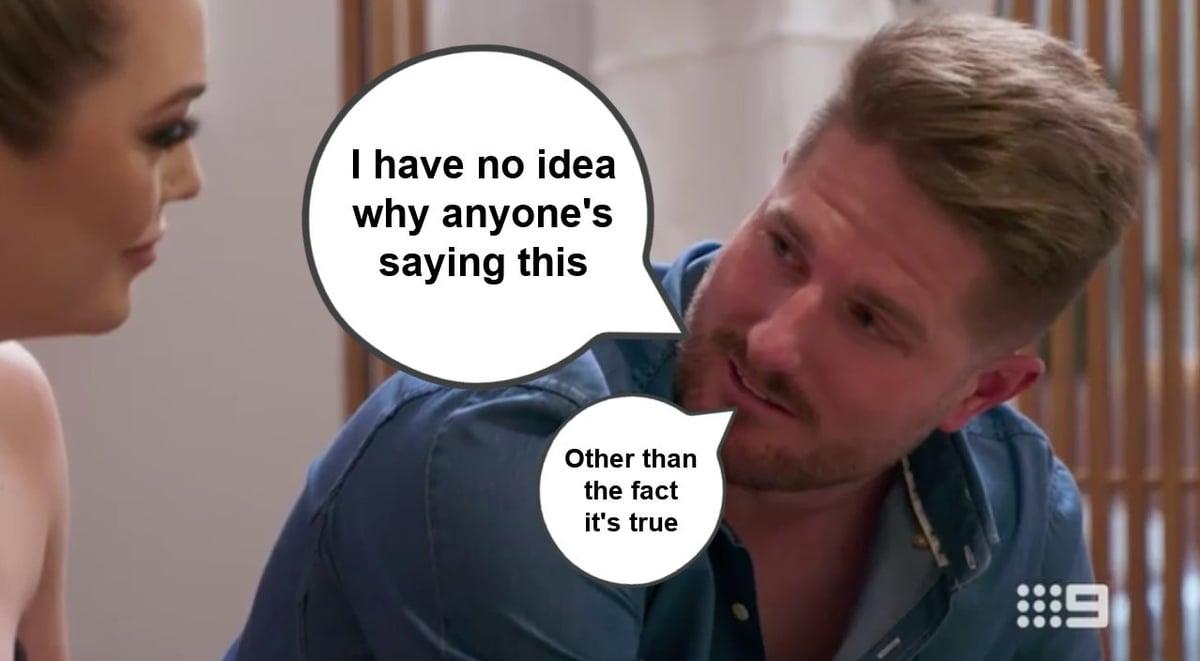 "That could be it but idk."

Melissa comforts Bryce, who she figures must be really missing his secret girlfriend.

IT'S TIME FOR THE DINNER PARTY and the experts are all showered and dressed and ready to hide in a cupboard for four hours.

Jason arrives and starts asking people if they've heard about the Bryce rumour and John Aiken is acting... shady. 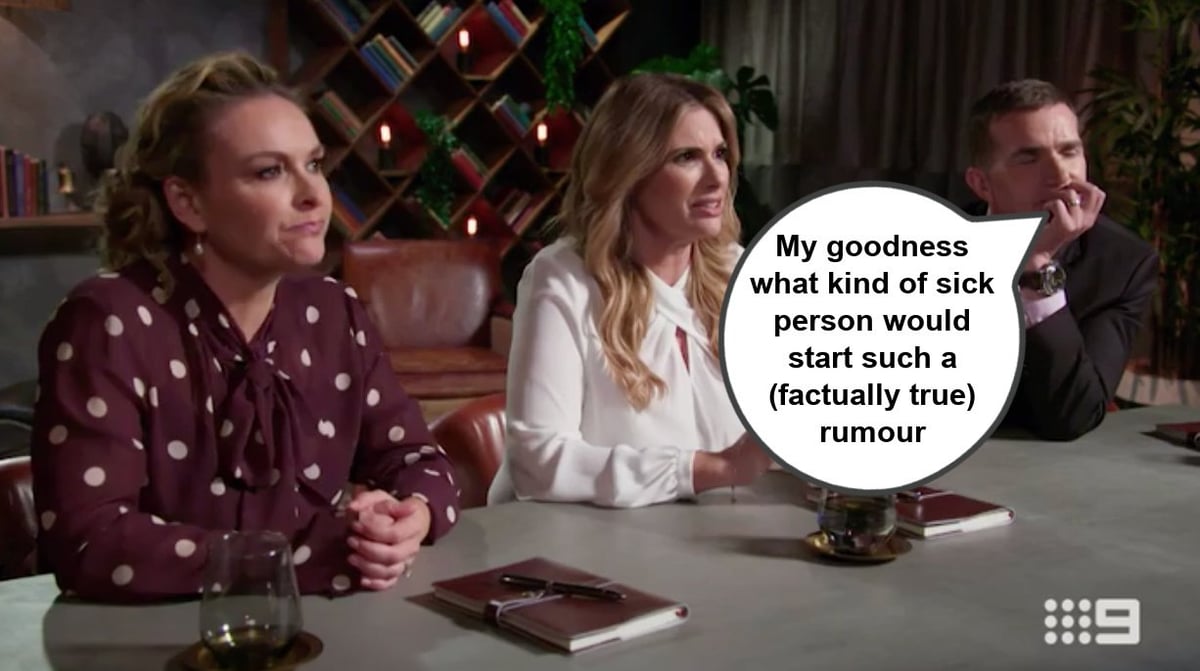 "Who would do such a thing?"

It turns out, everyone has heard the rumour, and most people think it came from Jo.

OK. In Jo's defence she's had A LOT of time on her hands ever since her husband became a Missing Person. Twice. And if our husband made that joke of which we do not speak on national television, we would also be making up rumours.

But apparently it isn't Jo. 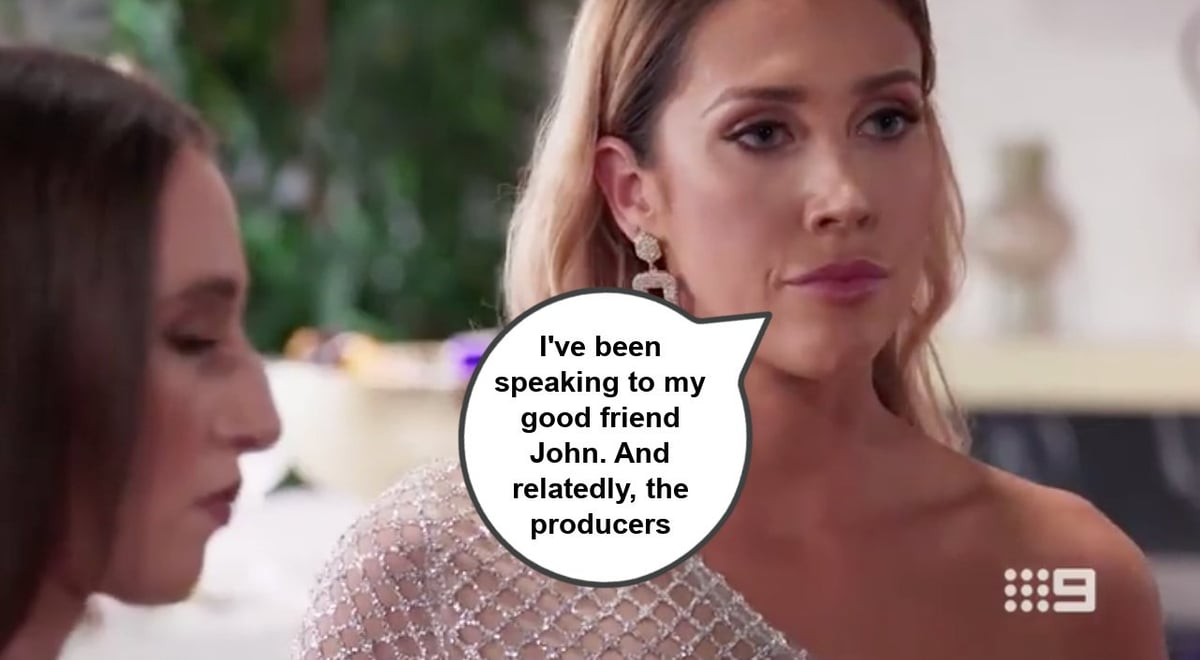 Bryce explains that Bec has always had a "real fascination" with him and is probably jealous of Melissa.

Bryce yells at the women, asking if they've just got nothing more interesting to talk about other than him and Melissa and like honestly, no? Jo - as previously mentioned - lives alone in an apartment, with only the company of the police whom she calls about James' Missing Person file. We're not even on this show and we do not have one single thing more interesting to talk about than Bryce's secret girlfriend. This shall sustain us for weeks. 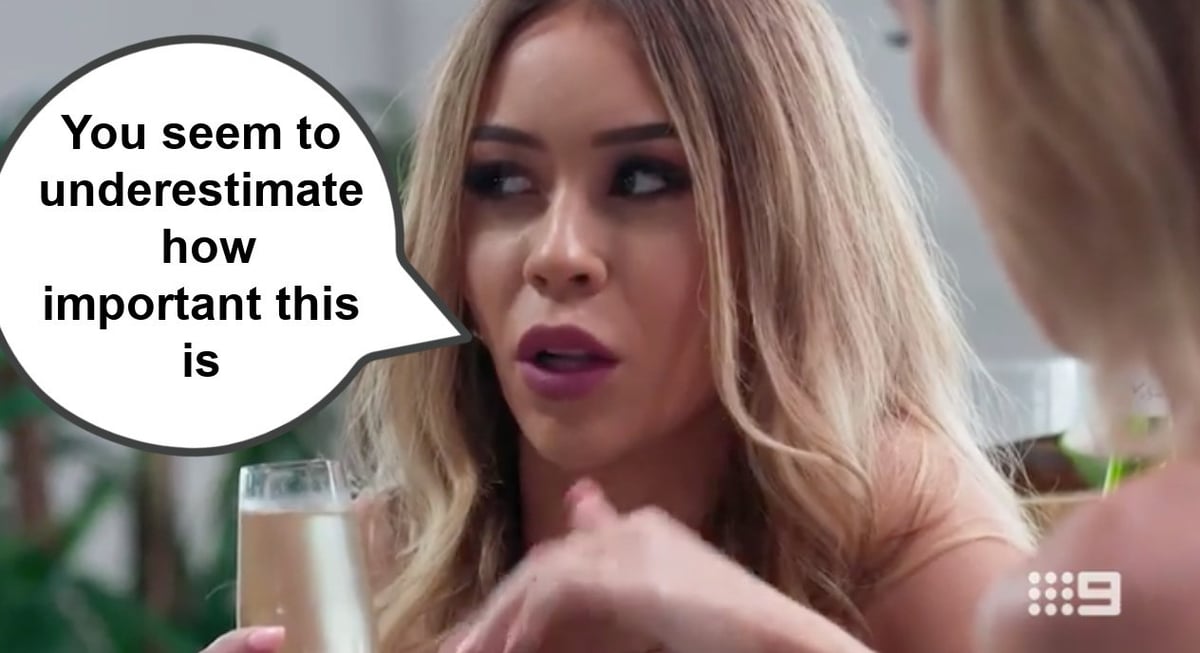 "This is all that matters right now."

Bec then approaches Bryce and gives him the opportunity to "come clean" and goodness this just keeps getting better.

She says that when she was in the gym a few weeks ago, Bryce told her he wanted to send a gift to a girl on the outside and we implicitly believe her.

John Aiken decides to take this opportunity to explain how rumours work to Mel and Alessandra who seem to have been following thus far but good for John to... clarify. 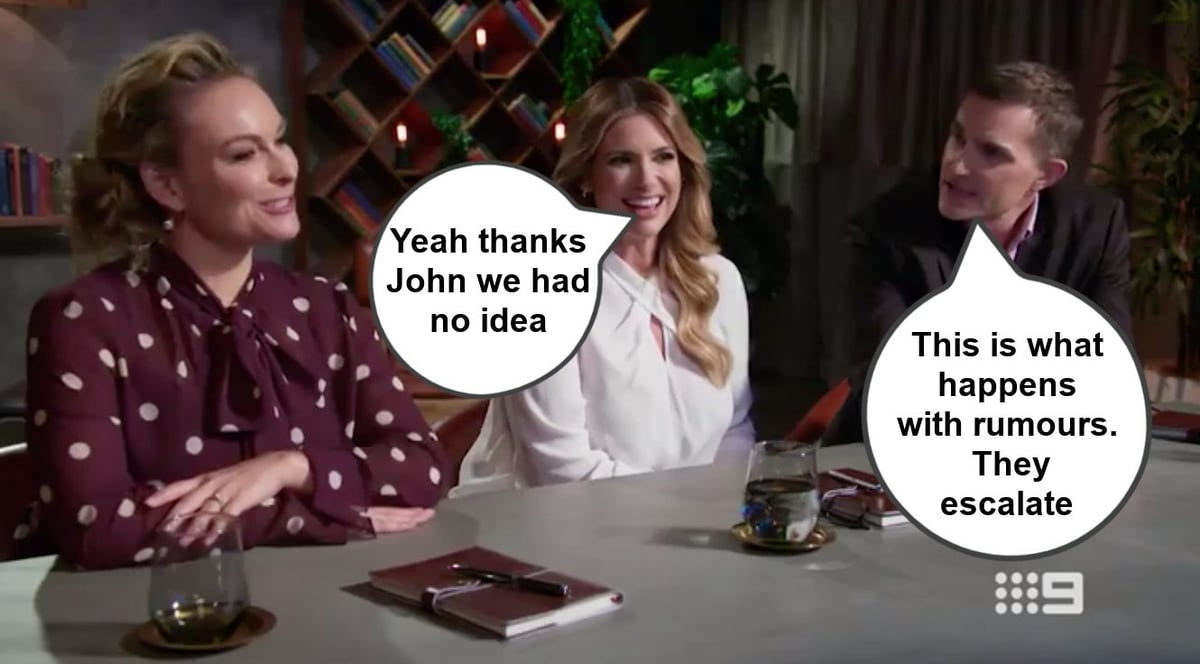 "A rumour can be defined as a currently circulating story or report of uncertain or doubtful truth."

Just as Bryce starts turning purple, a waiter announces "DINNER IS SERVED" and mate could you not have waited like five more minutes.

Once they're seated, Bryce glares at Bec muttering mean things under his breath like the grown man he is.

And then Bec sits across from him.

She explains to the table that Bryce told her in the gym that he put her on the top of the "attraction scale" which Bryce... accepts.

He then told her it would be easy to get to the end with Melissa, but that he had a girl at home and wanted to buy her a gift.

Bryce gets increasingly angry and denies everything until he just shouts: "SORRY I MET A GIRL ON TINDER TWO MONTHS BEFORE THE EXPERIMENT AND SLEPT WITH HER A FEW TIMES." 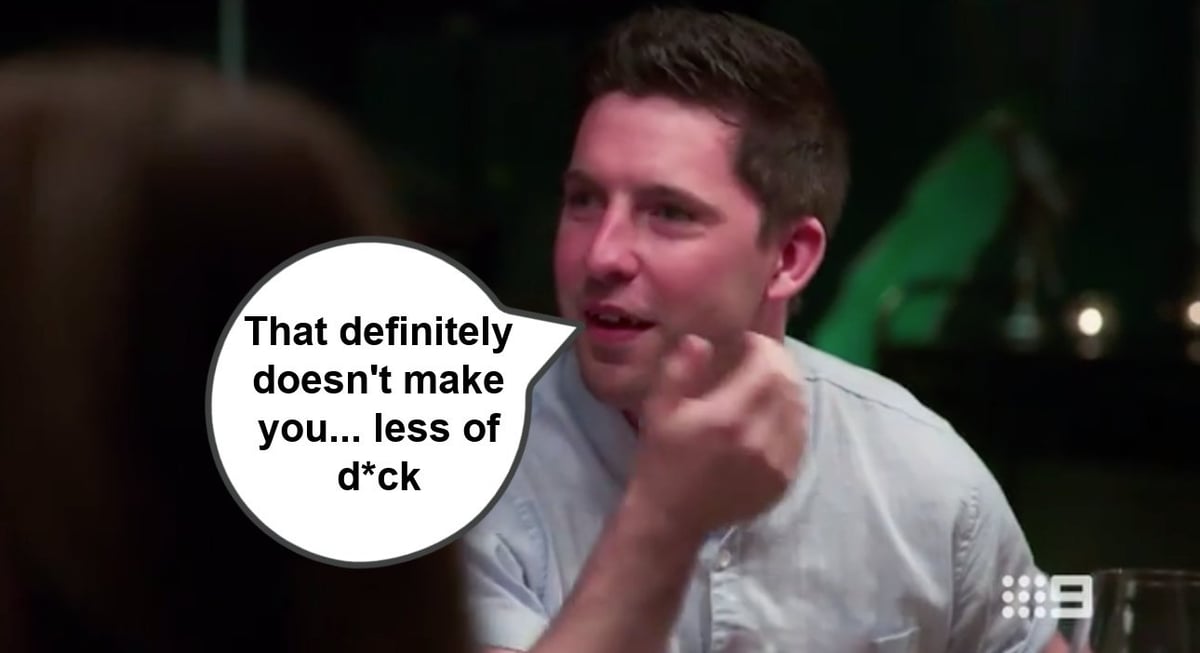 "Well. That's much worse." Bryce starts swearing at Bec and Jake says calmly, "Don't speak to my wife or any other female with language like that" and oh wow we almost forgot what decent human behaviour looks like.

No one, least of all Bryce, has checked on Melissa by this point. So Alana asks how she is.

She announces that she needs to be there for Bryce, and... we don't know how to put this... but you really, really don't. 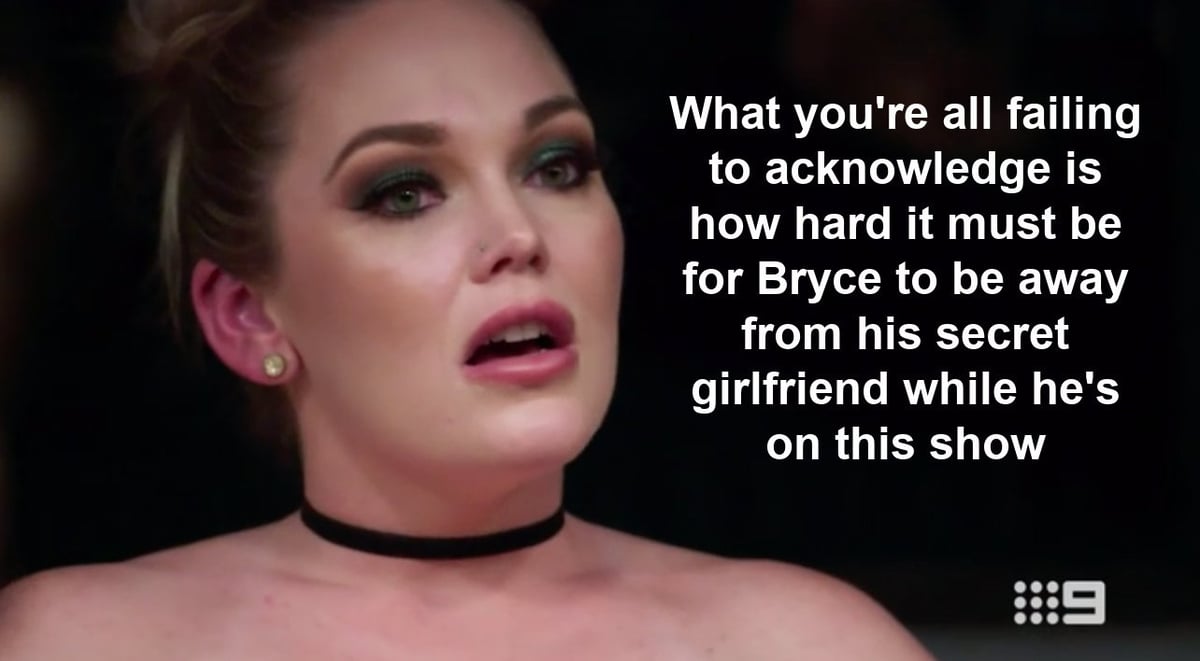 "Can we all just have a moment's silence for Bryce."

In the most surprising turn of events in this episode, Bec appears to momentarily like Jake ever since he stood up for her.

But there's tension brewing in the corner, and yes, Belinda has had one too many wines.

Jo has unleashed on James ever since he keeps disappearing and won't tell anyone where he went (Alessandra's house).

Belinda is every woman in a club who has made a friend in a bathroom toilet and thinks they're sisters now.

"YOU'RE CoNtRoLlInG aNd CoNfUsInG," she says, while wagging her finger and slurring just a lil bit. 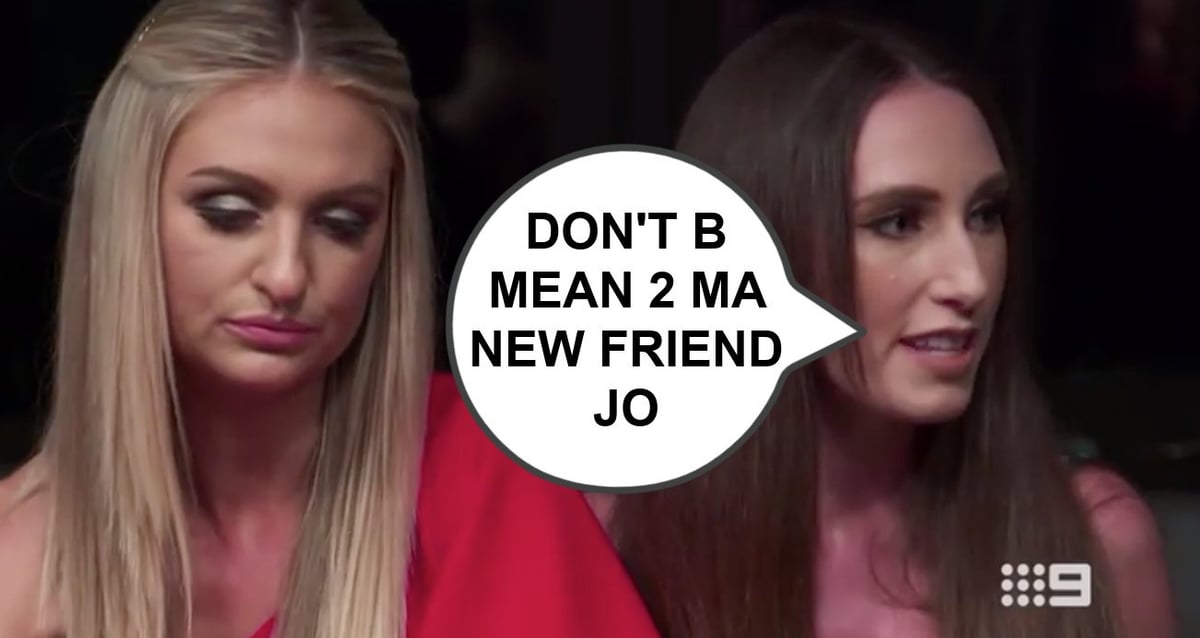 But Belinda has another issue she'd like to raise with James.

Apparently, he's been talking behind her back. And called her "a frigid". Which doesn't make grammatical sense. But that's beside the point.

James explains that he simply asked the question, kind of like how it's okay to ask a friend, "hey, are you a lying cow?" but it's not okay to just call them a lying cow.

And he liked it when his good friend Jake did a stand up for Bec and thinks he would like to do that, too. For Belinda.

"Say sorry," Patrick says in a voice that is two octaves too deep.

"THAT'S NOT A SORRY AT ALL JAMES. SAY SORRY," Patrick yells. 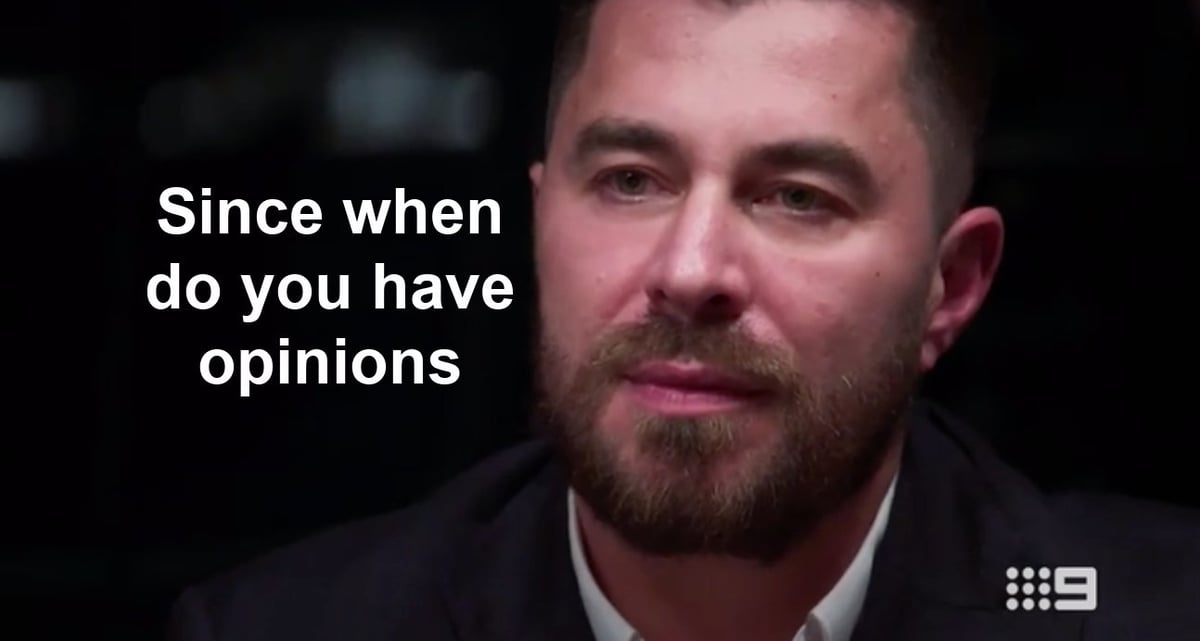 "I did not expect this confrontation."

The experts are very impressed with both Belinda and Patrick sticking up for themselves and, how do we put this.

We know from experience.

Finally, James properly apologises, and everyone calms down and agrees to behave like civil adults.

You see, Jo isn't done yet.

She keeps calling James "king d*ck" and James keeps saying "I rest my case" even though he has no case and that obviously upsets Jo immensely.

For the rest of the episode James laughs like a maniac and hugs an unsuspecting Kerry who would like to tap out of this sh*t show of an experiment immediately.