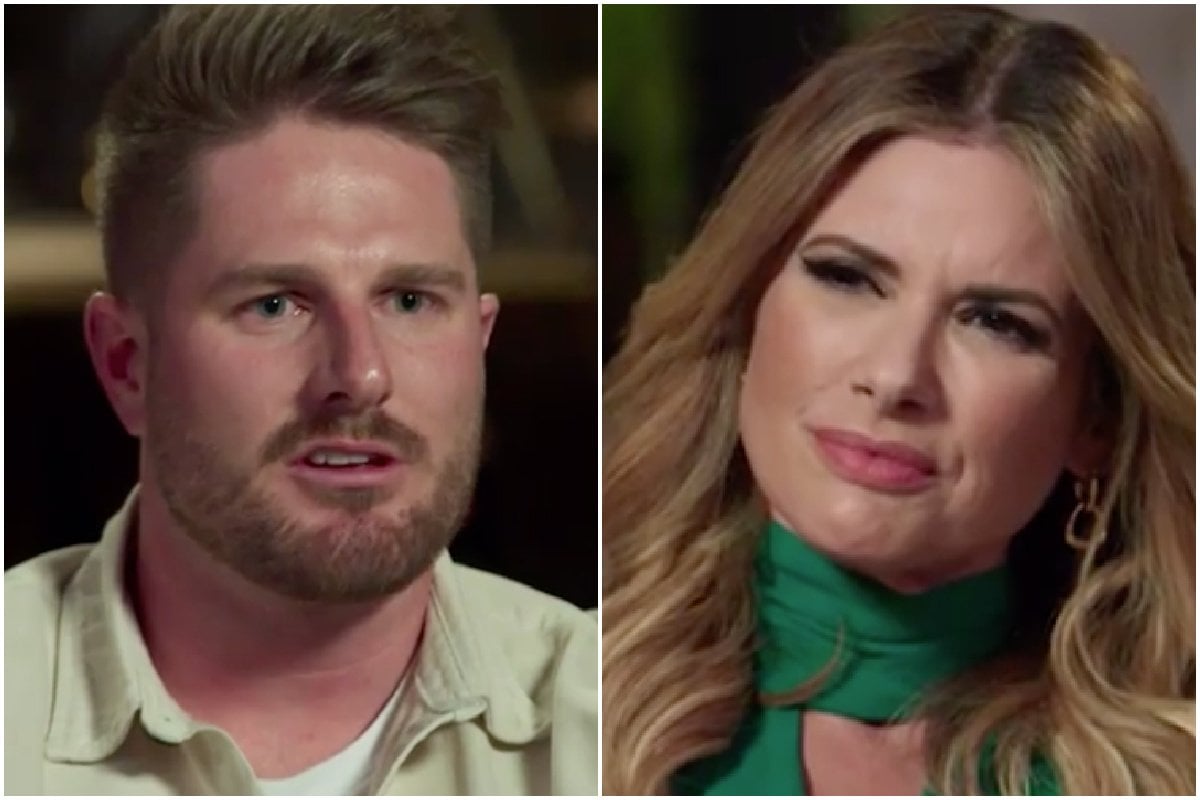 It's the morning after the dinner party, which means yes it's time for the experts to get the naughty boys (Bryce) in trouble.

Reflecting on last night, everyone feels sorry for Melissa. Except Melissa. Who feels sorry for Bryce. Because no one is being sympathetic enough that he has a secret girlfriend and must really miss her??

Melissa reflects that she and Bryce don’t argue, and sweetie that’s because he says most women in this experiment are hotter than you and you don't... challenge him? About that?

Meanwhile, Kerry and Johnny are working out what their couple name should be and settle on 'Jerry'.

It's lovely that they're not fighting about a rumoured cheating scandal but also, this isn't what wins the ratings on a Sunday night, guys. 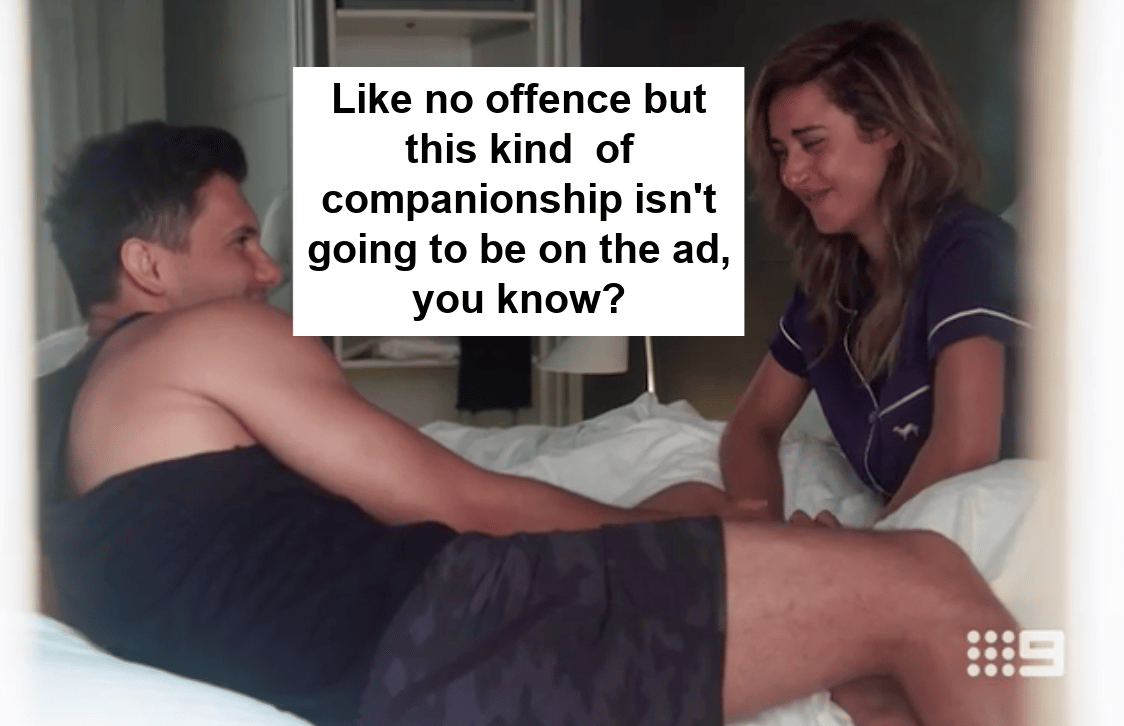 It's time for the couples to separate to discuss their Commitment Ceremony decision, and we get a flashback to last week when James made the joke.

We can't see this footage anymore do you understand.

Unaffected by the trauma of last week's Commitment Ceremony, Jaimie is telling a few of the women about her new husband, Chris.

"What do I like about Chris..." she ponders and we don't want to be rude but have you seen his fkn face? 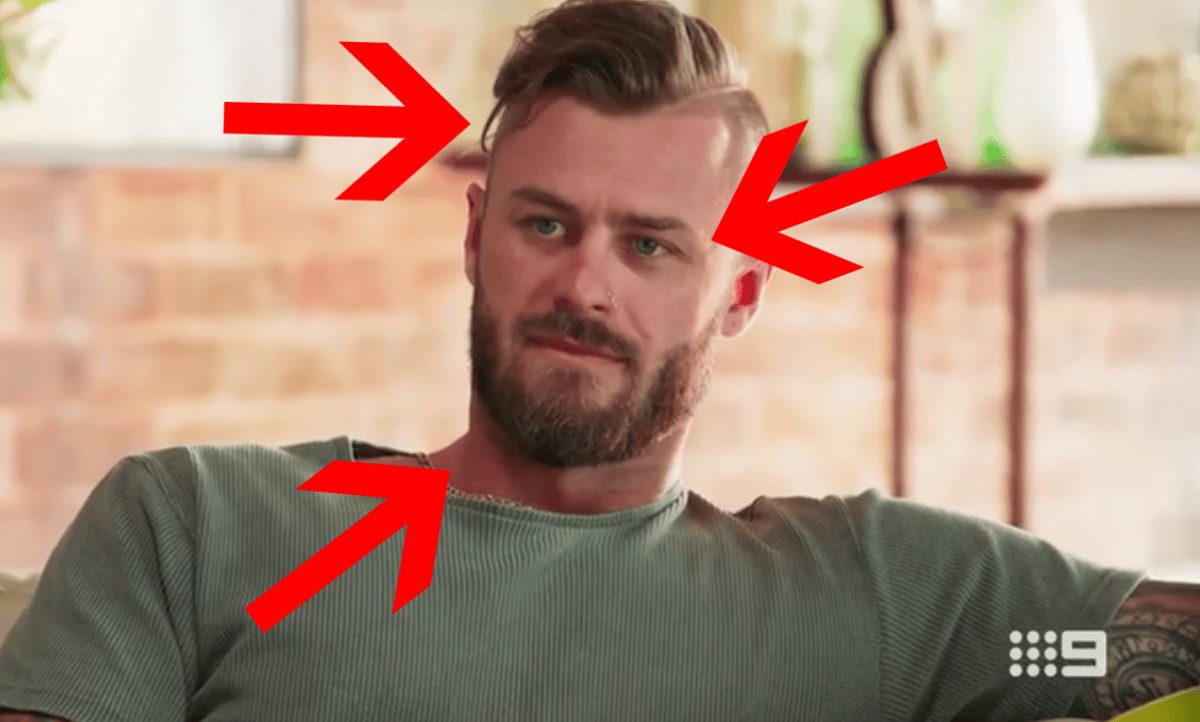 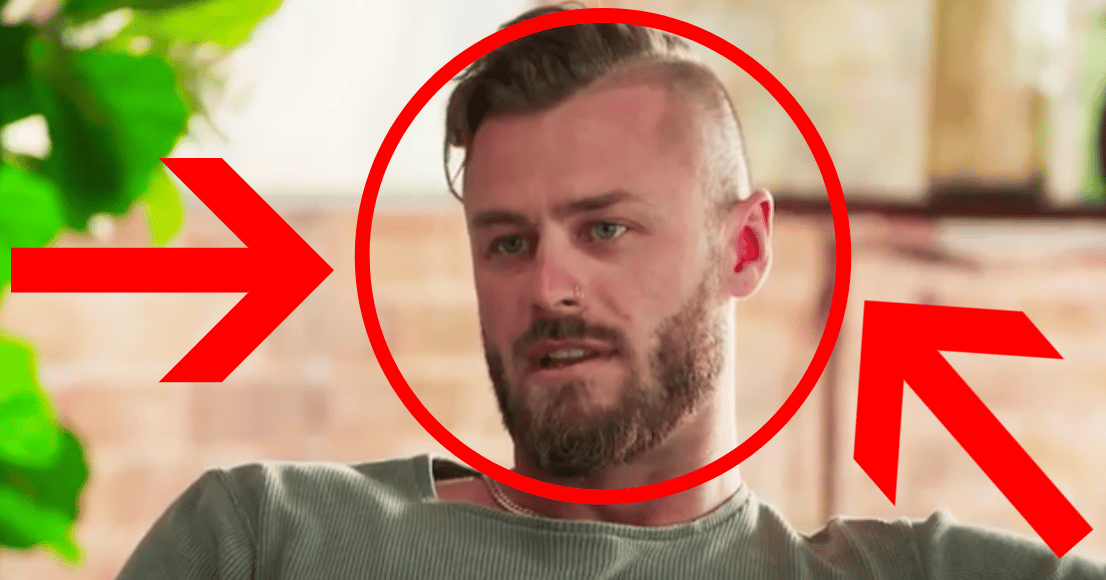 "On the family values, morals, we're really aligned," she says. "He's been really thoughtful and considerate since we met. But, yeah."

Oh. It's his "Queensland haircut".

"There's some big things for us to work through," Jaimie says and holy sh*t you think his Queensland haircut is bad you should meet Melissa whose husband literally has a secret girlfriend.

SHUT UP because it's time for the Commitment Ceremony and James is wearing a cardigan that's way too casual because he clearly has somewhere to go after this. 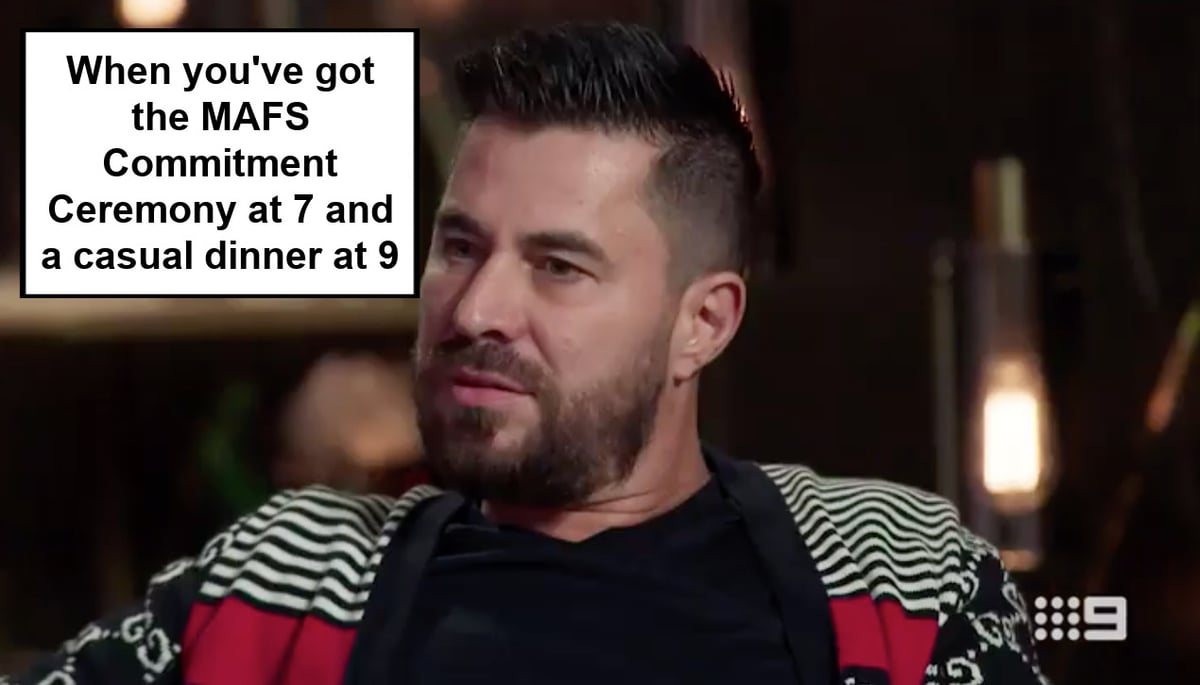 'I don't want to be rude but can we speed this up.'

First up are Belinda and Patrick, who are doing very well, which the experts find boring. In the interests of starting sh*t, expert Mel brings up the time James called Belinda "frigid", and dear God it will never stop being strange that the experts watch the dinner party live from a cupboard.

James apologises again, before adding: "but you have to understand something, you were not responding to the affection Patrick was giving you..." and James should you really be lecturing anyone about their relationship right now.

Bec and Jake and Booka and Brett are all... fine and choose to stay, but then it's Alana and Jason's turn on the couch.

They sit down and Alana says Jason was pissed off this morning and Jason's all like when was I pissed off and they can't look at each other and Alana has tears streaming down her face and they both look like they haven't slept but have also potentially witnessed war crimes. 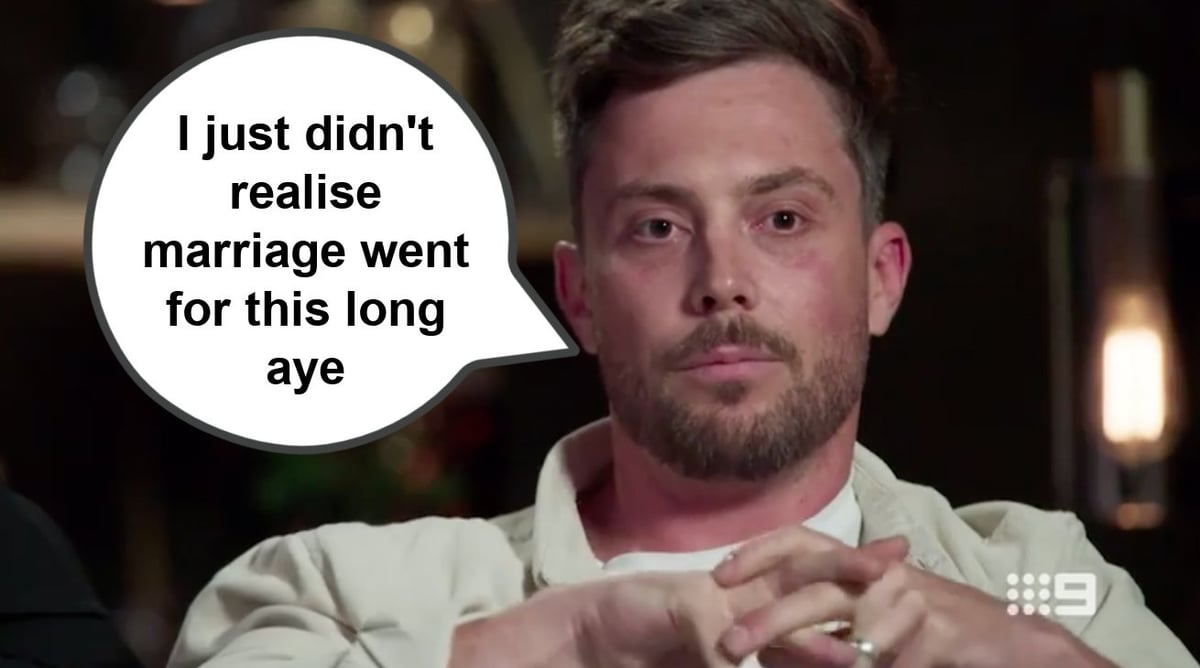 Sir. It's been one month.

The experts aren't quite sure what to make of this.

They keep cocking their heads to the side and asking weird questions about how their relationship has improved this week and look we're not qualified sexologists but our hunch is that it... hasn't.

That's when Mel cracks it.

"Are we picking up on something here, guys?" and yes, lady.

Our official diagnosis is that Alana and Jason had too much sex too soon and now they need to calm the f**k down for five minutes.

Because Jason is tired. 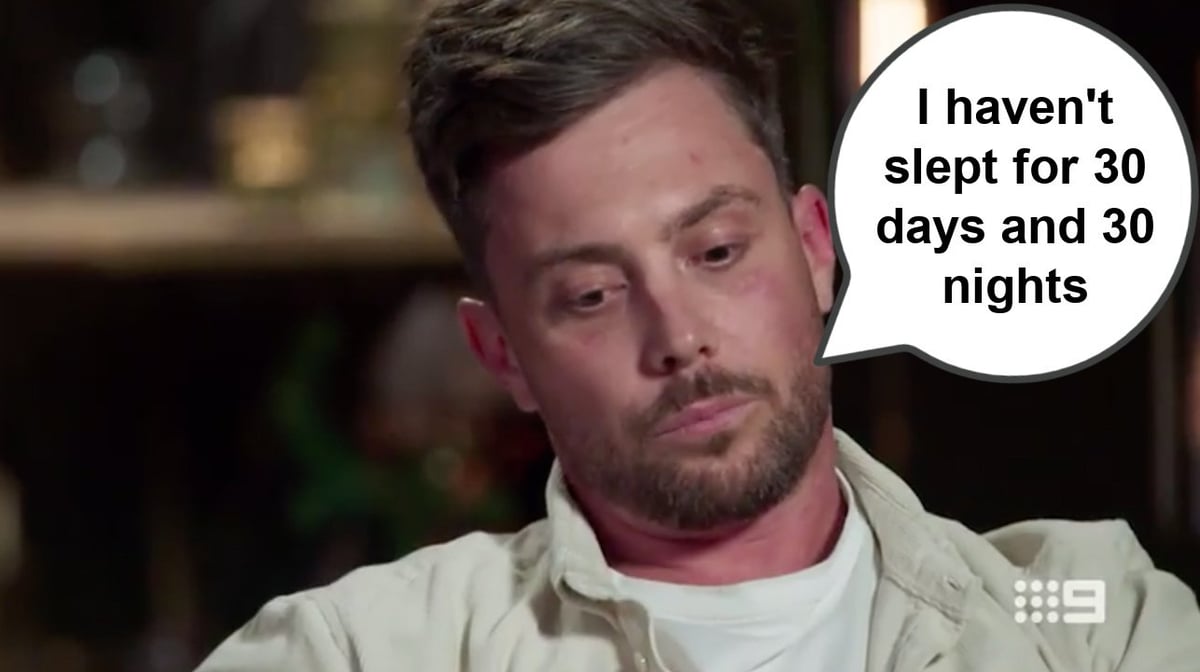 Jason says the spark is gone and is anyone gonna tell him that that's probably normal when you've been sharing a toilet with a woman for a month now?

Alana cries some more because she's probably also tired from all the sex, and finally they both decide to stay.

Next are Johnny and Kerry and again there's too much optimism and mutual respect for our liking.

John Aiken says he's excited for them to have sex which feels like an inappropriate thing to say in the workplace but OK.

The only thing of note is that Kerry appears to have a nervous tick where every time she feels uncomfortable she puts her thumb up. 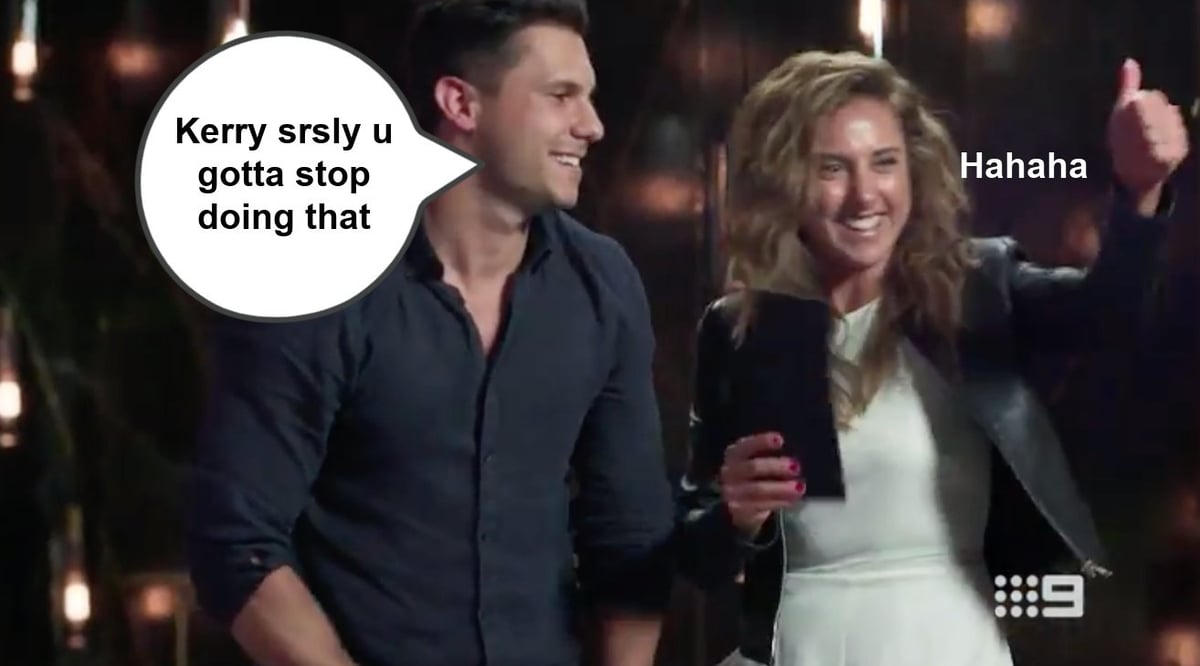 "Since when is that an appropriate adult greeting."

Next up are Jaimie and Chris, and Jaimie calmly explains to the experts that they did have one disagreement. Where he was formally identified as a dirty grot. And he didn't agree. But he is. So yeah, she nods. It wouldn't have been an argument if he was less of a dirty f**king grot. 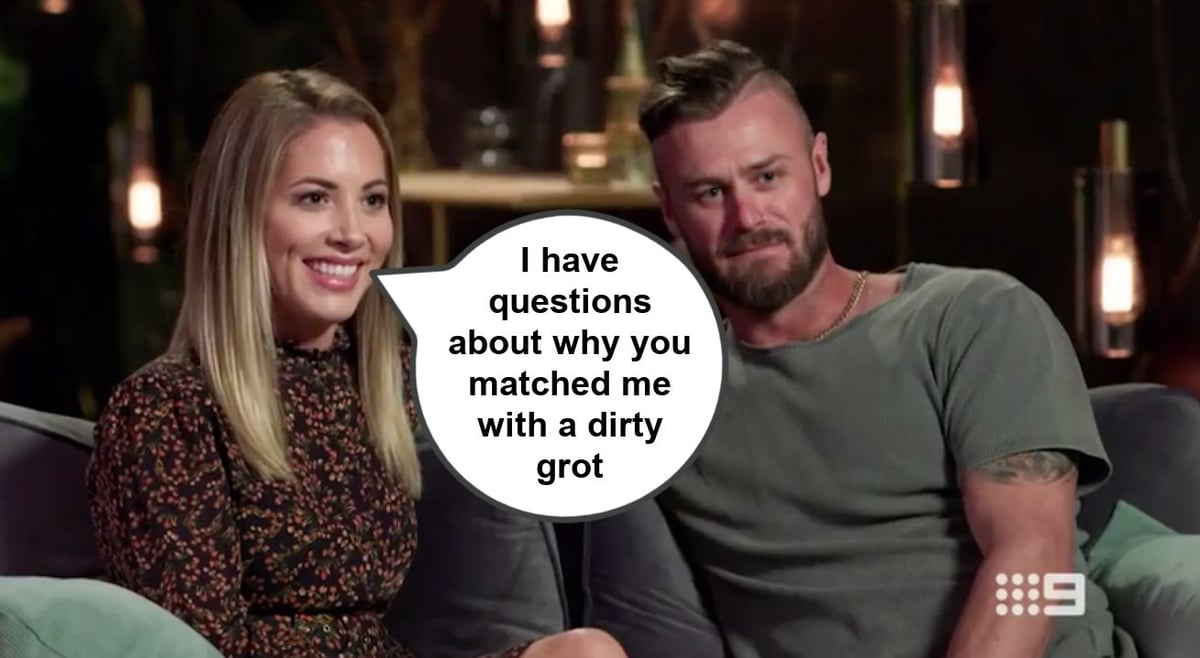 "Sorry just wanted to clarify: Did I accidentally request a dirty grot??"

They both nod and Jaimie explains that they share things such as family values and it all feels very much like a performance review where at the end Jaimie might ask for a $10,000 pay increase.

But John Aiken doesn't buy it. Not least because no one is getting a pay increase. Except for maybe Bryce.

Jaimie says it will be interesting to try and work out why they were matched and the experts won't... tell her. Because they can't... remember. But they think it might've been because Jaimie is critical and Chris doesn't like being criticised. Genius.

John Aiken decides to yell at them "GET VULNERABLE FAST" because they've got "nothing to lose" and we'd say that's true except for the respect of an entire nation. 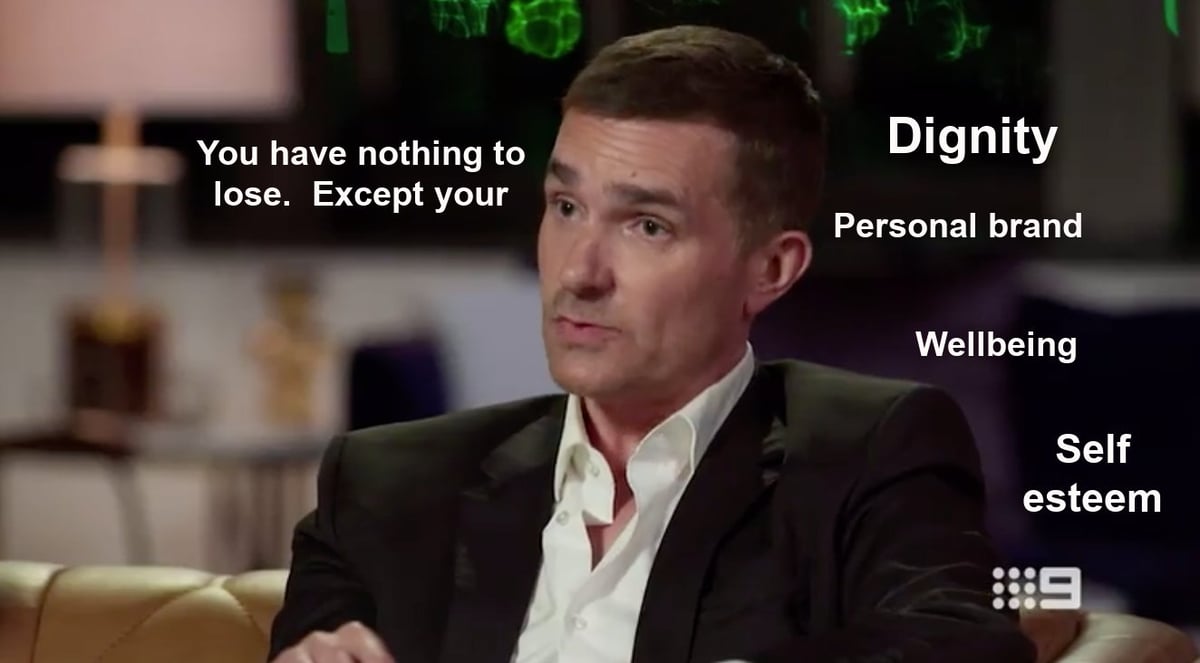 "And other than that, just potential career opportunities etc."

He would like more of the dirty grot comments, pls. And with that, they go back to their seats.

James begins by asking "Can I just say something" and no no no no not again don't you dare.

Alessandra starts hyperventilating and Jo is getting flashbacks and James' joke has haunted us every night this week do you hear.

He decides to apologise to Alessandra for his bad joke last week and she accepts his apology mostly because none of us need to be reminded of the time James pretended to leave his wife for an expert and no one laughed.

They both recount how the week has gone, and Jo starts yelling: "YOU ARE FULL OF SH*T. YOU ARE TALKING RUBBISH. YOU ARE MAKING YOURSELF LOOK SO MUCH BETTER THAN WHAT YOU ARE."

She brings up the time when James became a Missing Person and she had to explain to the police that her fake husband wasn't replying to her text messages and they told her she was wasting their time and they had more important... crimes. To pursue. 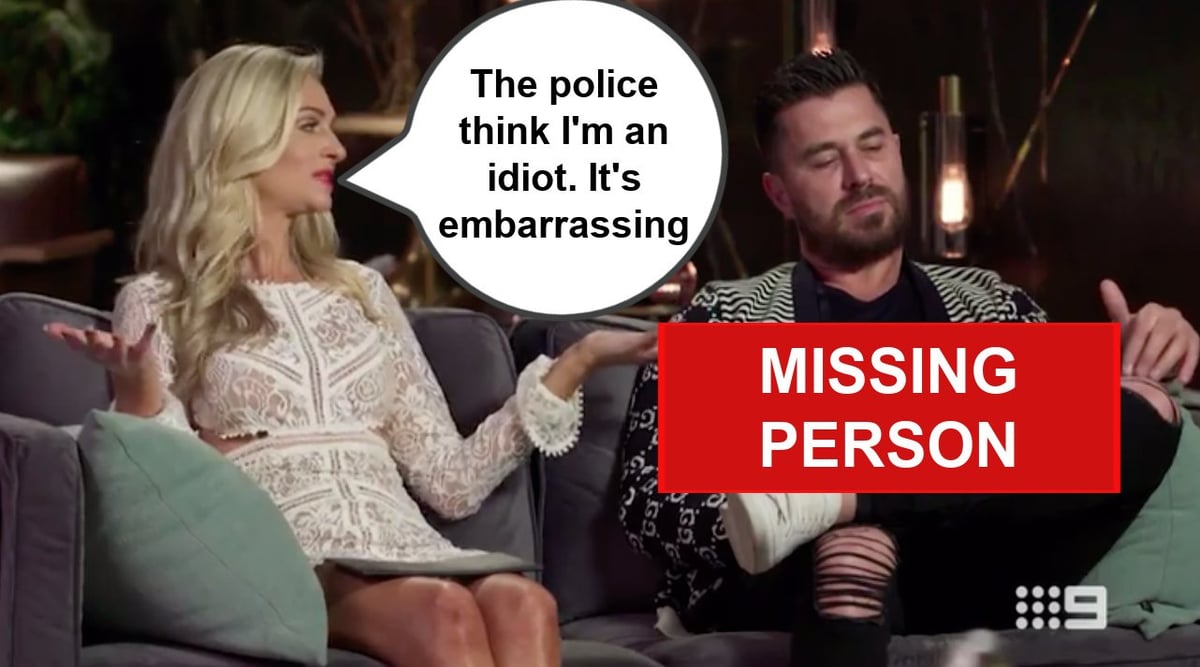 "They gave me a warning."

But this isn't about James. Or Jo.

It's about John Aiken giving a lecture about the 'G' word.

"This is classic, stereotypical, gaslighting behaviour," he explains to the room, but mostly to fellow experts Mel and Alessandra.

He pretends like he came to that conclusion himself, and not because Jo literally said that word 45 times at the dinner party while staring down the barrel of the camera straight at them.

All the women are like "yeah, John, we know," but he's like "NO. IT'S IMPORTANT I DEFINE THE WORD GASLIGHTING SO THE WOMEN CAN COME TO UNDERSTAND."

Eventually, Jo just shouts the word "LEAVE" before anyone can ask her and James says he'd like to leave (more).

It is a civil end to a relationship that had no high point. Only varying degrees of low points.

The last couple are Melissa and Bryce and SILENCE WE NEED SILENCE.

Melissa tries to say there have been some hiccups this week, but Bryce interrupts by spitting that NONE OF IT IS TO DO WITH THEIR RELATIONSHIP, JUST OTHER CRAP THEY'VE BEEN DRAGGED INTO.

"I didn’t come here to get involved in high school crap," he says, just weeks after starting a fight with a grown man and throwing a glass of water at him. "I came here to meet a wife. Having rumours made up about you... it’s not good."

But none of the experts are going to let this slide. There's so much scope here for gossip and there'll be getting all of it.

Judge John Aiken asks if any part of the rumour is true and Bryce yells I WON'T HAVE A GIRLFRIEND AFTER SHE SEES THIS. IF SHE EXISTS.

Dude we get that you're trying to be sarcastic but honestly it's getting confusing. 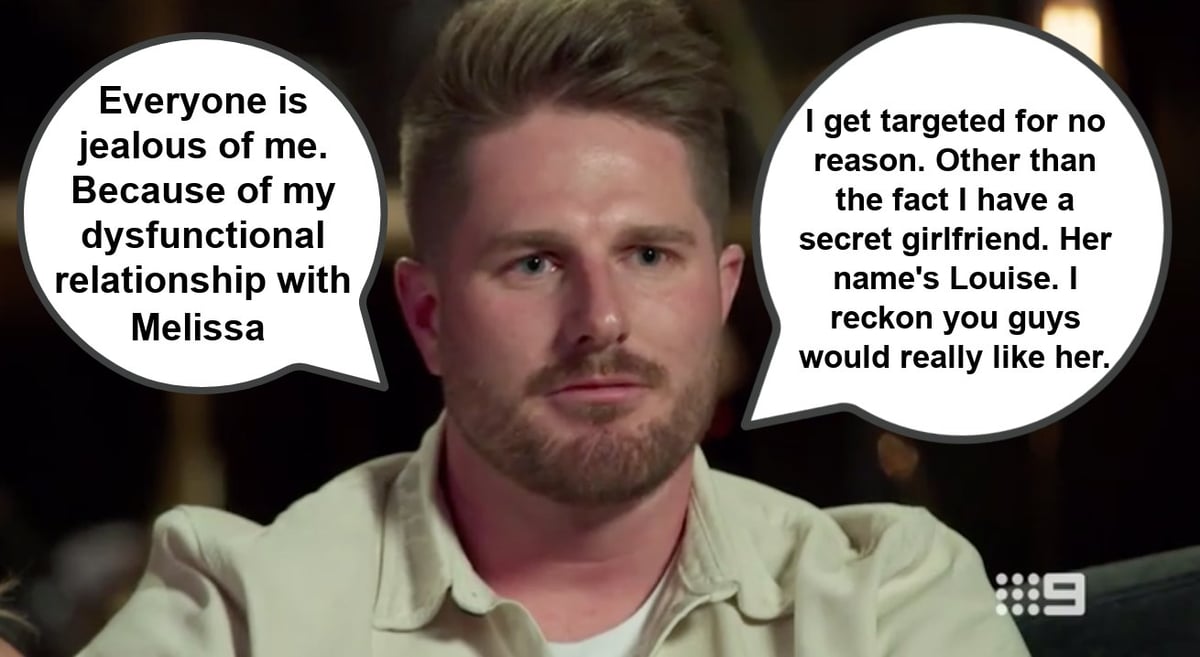 "Should I bring her to the dinner party y/n."

John then calls the prosecution to the stand: Bec. She explains she's only told the truth, and that the defendant a) said he ranked Melissa fourth and Bec first, b) said it would be easy to get to the end of the experiment with Melissa, and c) said he had a secret girlfriend.

Bryce argues that while yes those first two points are accurate, the secret girlfriend is a complete fabrication which is just such a strange argument to make.

Luckily, Judge John Aiken asks the question we've all been waiting for: what compelled you to tell Rebecca where you placed her in the ranking?

Bryce simply repeats "general conversation" over and over again, until Melissa finally explains that it's "embarrassing for her". 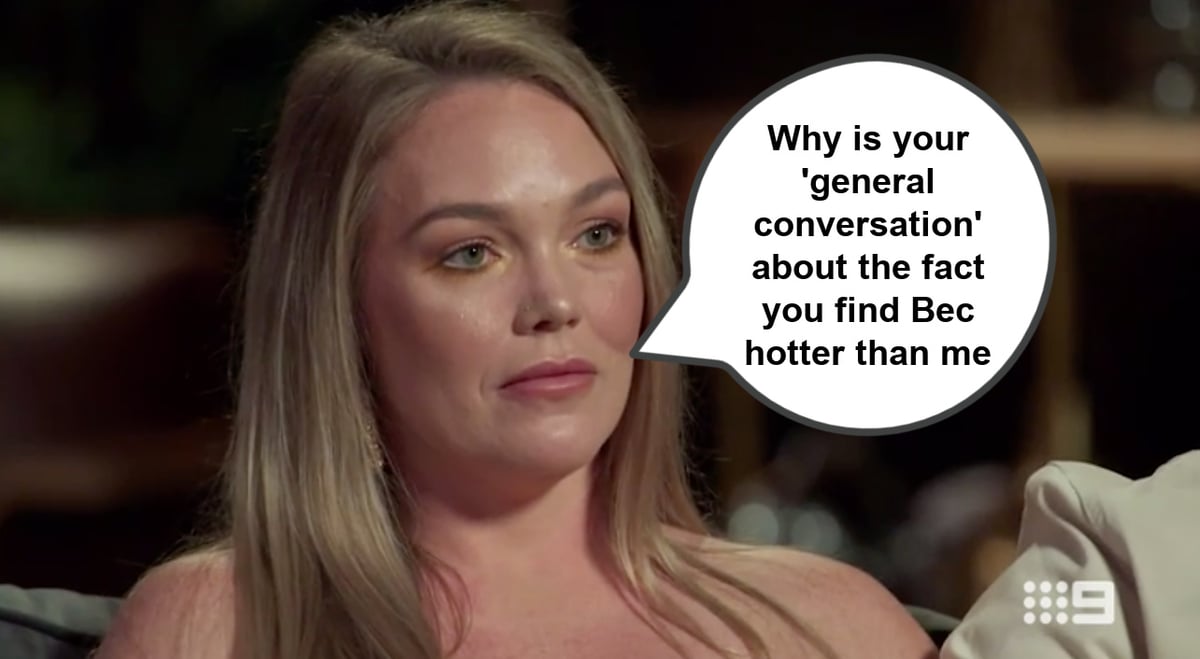 "I don't think it's embarrassing for you," Bryce responds and we've never witnessed a less self-aware person in our whole entire lives.

The experts push Melissa to tell Bryce how she's feeling, and she ultimately explains that she has an intense fear of losing people so she doesn't want to upset him. She also hates conflict and last time Bryce argued with someone he threw a beverage at them. In front of the nation. On the television.

John encourages Bryce to be "delicate" in how he speaks to Melissa and Bryce agrees, before adding: "I need your help in dealing with pure stupidity and idiots," and you've totally missed the point of what literally everyone has tried to get through to you.