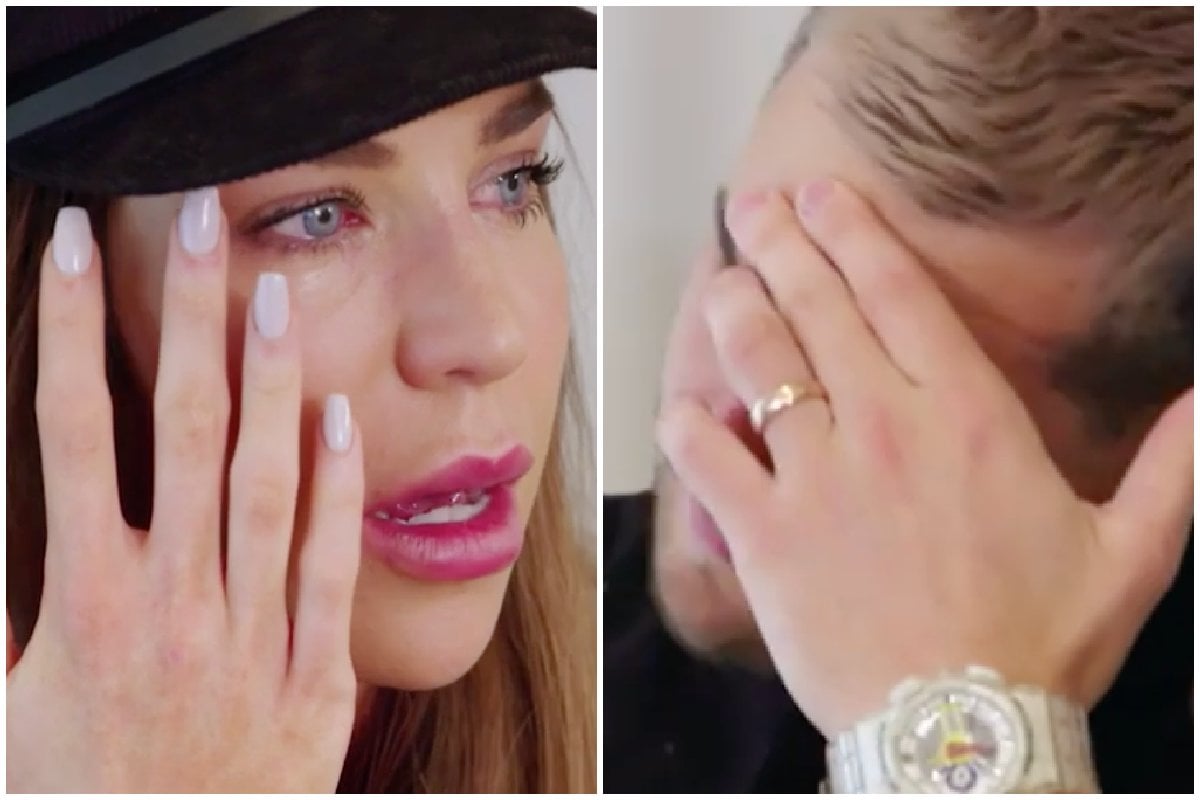 And she'd like to file a formal complaint against her husband.

She's pissed off because it's day five of Jake not making the bed, and yeah, she's feeling a bit sensitive about it and LADY YOU KEEP CALLING HIM BORING TO HIS FACE REMEMBER THAT.

It's at this point that the experts are forced to acknowledge that this whole 'Confession Week' debacle has ruined almost every relationship. 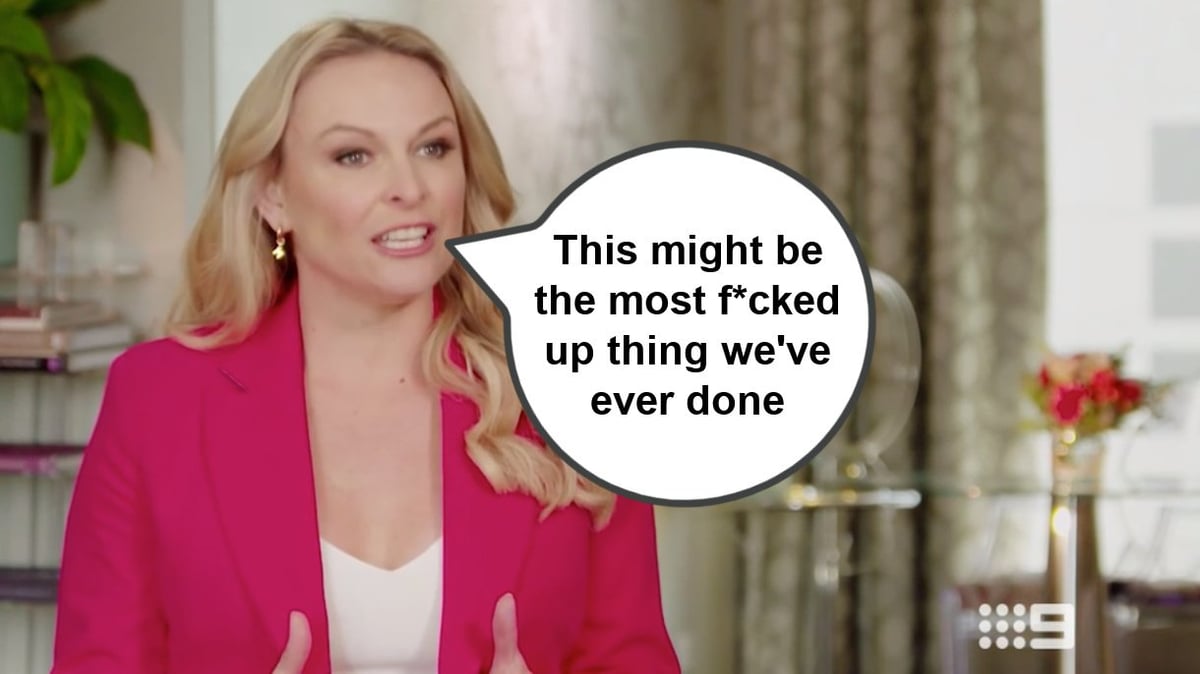 "At least in recent memory." Expert Mel says they're just trying to "fast track open and honest communication" and yes because people in long-term relationships always rank the opposite sex based on their physical appearance and so it's nice we're doing that early.

'Confession Week' has certainly strengthened Coco and Sam's relationship. The pair are sleeping separately ever since they called each other ugly.

Coco accepts that Sam just must not find her attractive, but Sam is simply bamboozled. He keeps calling Coco's ranking of him a "cheap shot" and can we talk about the EXTENT to which some men CANNOT understand that a woman WOULDN'T be attracted to them?? 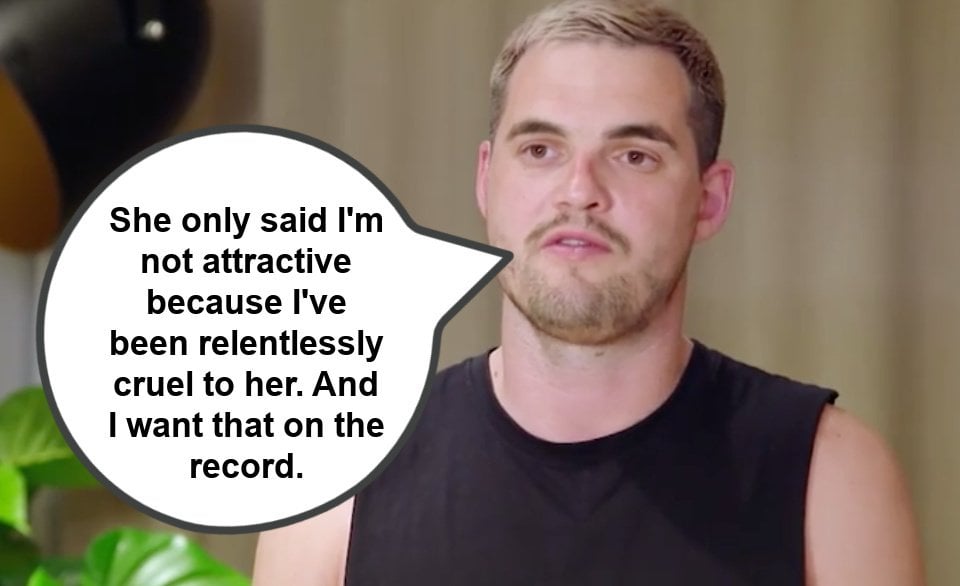 ... Why.  "I think it was a little bit of a swipe," he assures himself. "I get that she's emotionally charged, she's a female. She's got feelings," and mate you're the one who can't get over it.

Meanwhile, the narrator acknowledges the problems caused by the "photo ranking task".

Over in Melissa and Bryce's apartment, Melissa insists that it all would've been worse if Bryce "hadn't been honest about the order".

INCORRECT LADY. IT WOULD'VE BEEN INFINITELY BETTER. WE ALL KNOW OUR PARTNERS LIE TO US DAY IN AND DAY OUT AND IT'S ABSOLUTELY FINE.

Considering that their last activity went so well, Bryce and Melissa embark on the second task. They must confess something to each other they've never told anyone. 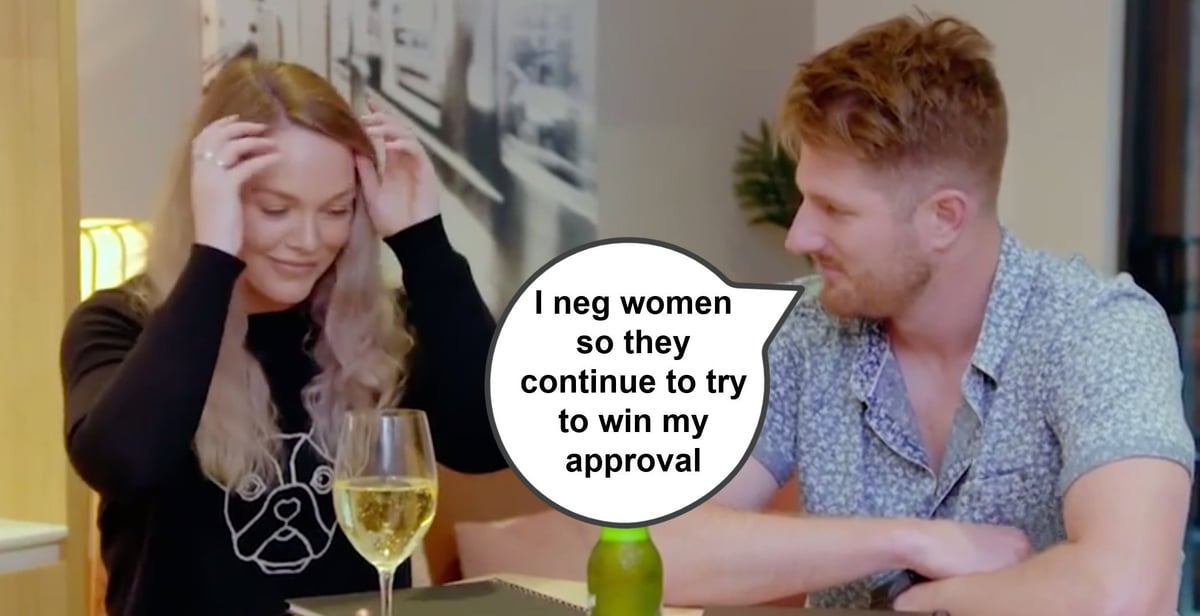 "Sweetie that's not a secret." Melissa explains that she's been sleeping with her ex partner in the 12 years since they broke up, and that includes during a period when he was married. She tells Bryce she didn't know that at the time, and deeply regrets her behaviour.

"I'm not here to judge," Bryce begins, before being judgy AF and asking "why the hell would you do that". He says he's super "pissed off" and okay, pause.

What Melissa did was objectively way less bad than breaking up with your fiance six months ago.... purely because you felt like going on Married at First Sight.

Unfortunately, the experts have found it considerably more difficult to break Booka and Brett. So they invent a new task where they have to write down five things they dislike about each other and stick them. To the other person's skin. With a Post-It note.

He then has to identify five things he loves about Booka which he does in a frenzy, explaining that all he's ever wanted is a smart girl, and... 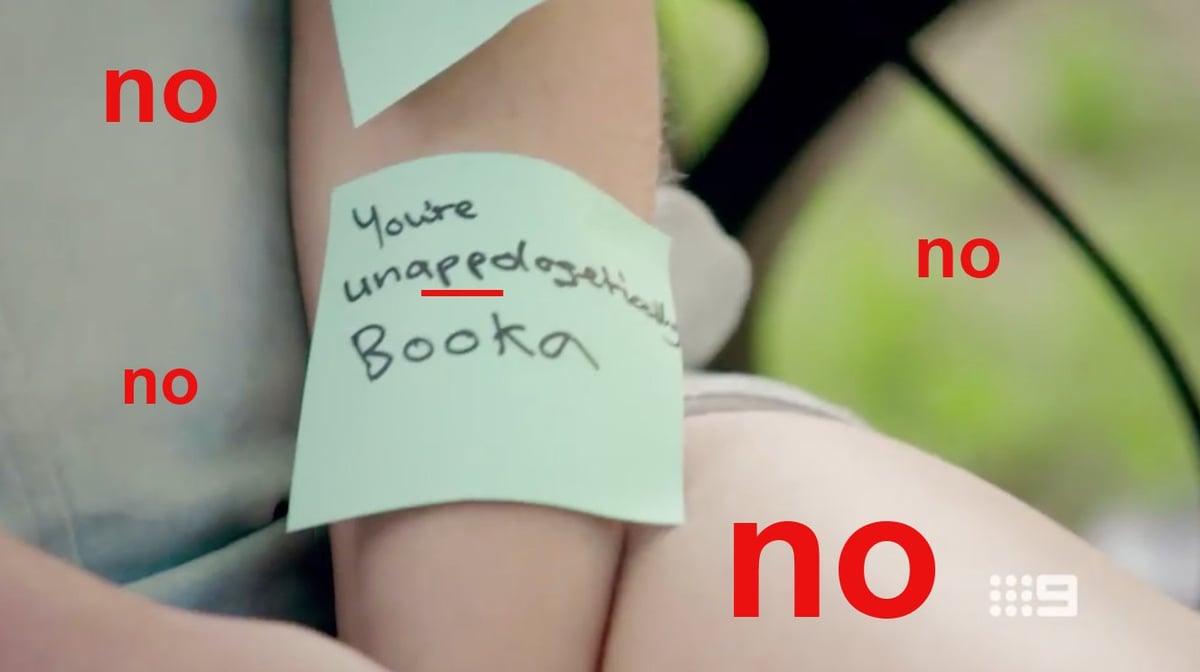 That's not how you.

Booka are you going to... correct. Him.

Because unapologetically isn't spelt like that and at the very least a producer could have told you.

Over at Sam's apartment, he's stopped crying for long enough to participate in another challenge where he and Coco must watch their original audition videos. 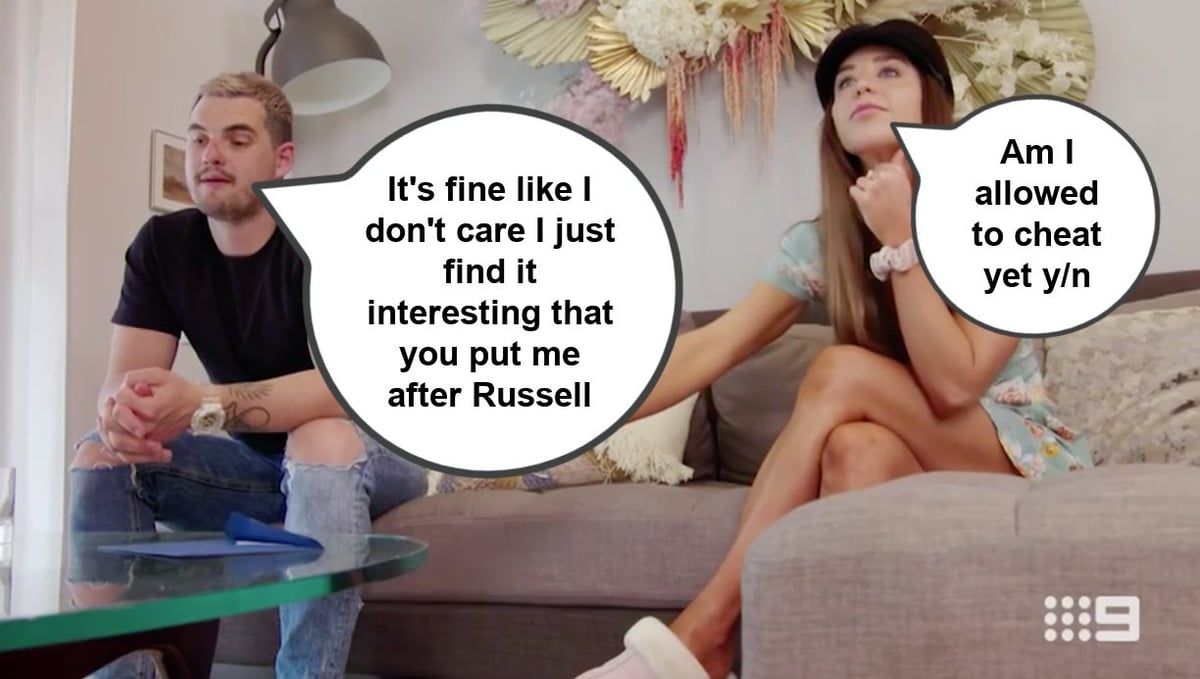 ...Y.  They watch Coco explain during her audition video that she's never been with a person who gives her compliments, or tells her she's beautiful. This of course begs the question: WHY THE F**K DID THEY MATCH HER WITH SAM.

On the couch beside him, Coco starts to cry. He mutters, "You are bloody attractive," and mate. Not. The. Point. And. Also. Too. Late.

Meanwhile, Samantha and Cameron are at the driving range, which seems very much like an activity Cameron just wanted to do and when producers asked if his fake wife could come, he said: fine. 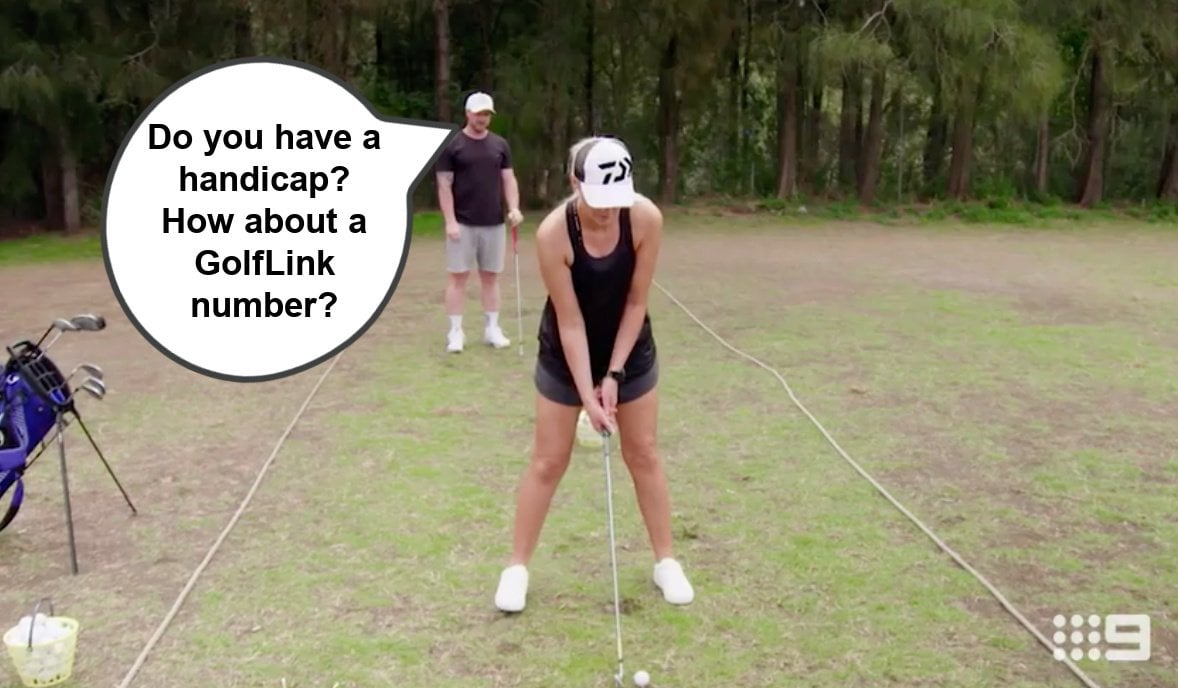 "Why don't you have your own clubs..." Samantha asks if he watches TV to which he replies no not really and Sam listen to us closely this is a major red flag get out of there immediately. Also Behind Her Eyes on Netflix is quite good we recommend.

Cameron tells the camera it's difficult to have a conversation with Samantha and maybe that's because you slept together and then you said you weren't attracted to her idk idk.

And he's ranking all the women in the experiment based on how much he has personally spoken to them about their interest in barbecuing.

The fact that Beth doesn't so much as bat an eyelid tells us that this is characteristic.

When it comes time to share his deepest confession, Russell keeps talking about his "secret herbs and spices" and dude no we're actually angry because no one cares. Least of all Beth. Like is your secret that you like KFC? Because same. But that wouldn't be in our top five deepest secrets?

But shhh because it’s time for Jo and James to do the photo ranking task for no reason.

Immediately, they fight over whether Jason - a nonconsenting part of this conversation - is attractive. This discussion doesn’t seem directly relevant to their marriage, but okay. 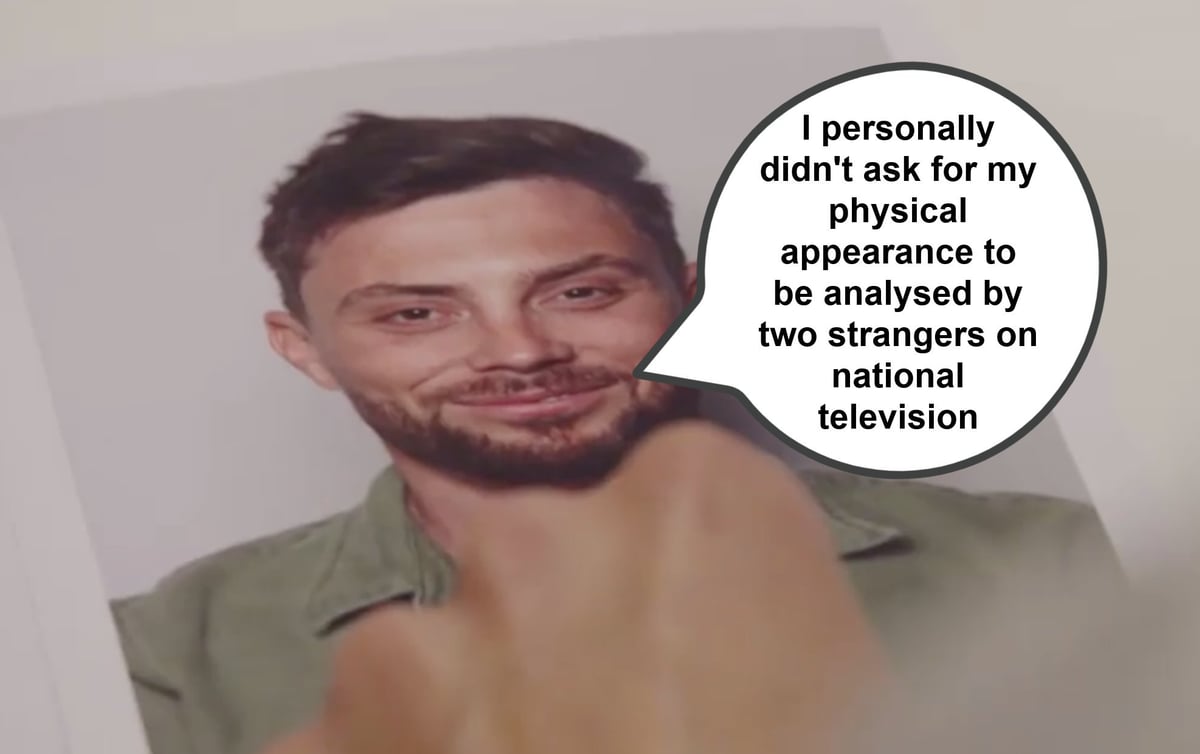 How is this helpful.

Ultimately, Jo puts Jake first, and James, her fake husband, second. James is angry because a) he’s a human being with feelings, b) his wife keeps repeating ‘Jake wouldn’t go for a girl like me,’ as though that’s the only reason she’s not… actively cheating with him, and c) he’s spiralled and convinced himself Jo IS cheating with Jake whenever she leaves the room.

“She keeps talking about Jake,” James says, paranoid. “She keeps disappearing from the room for half an hour, an hour, I don't know where she is.” He says she’s been ‘shady’ and sir pls if this was a cheating scandal someone would’ve thrown a fruit bowl by now.

But we're back to Beck because she would like to lodge another complaint/s about Jake.

You see, it's "disrespectful" because Jake:

- Turned the light ON while Beck was still sleeping

She explains that it's not only disrespectful but also "rude". And no offence but to refer to your earlier complaint, if Jake is getting up before you then why should he be making the bed.

But there's no time for compromise or conversations. It's time to rank the faces.

Beck puts Jake number one on the hotness scale, but then explains that she actually finds them all ugly it's just that Jake is the least ugly which is a nice thing to clarify.

Jake also places Beck first, before explaining that if it was based on personality, she probably wouldn't be. 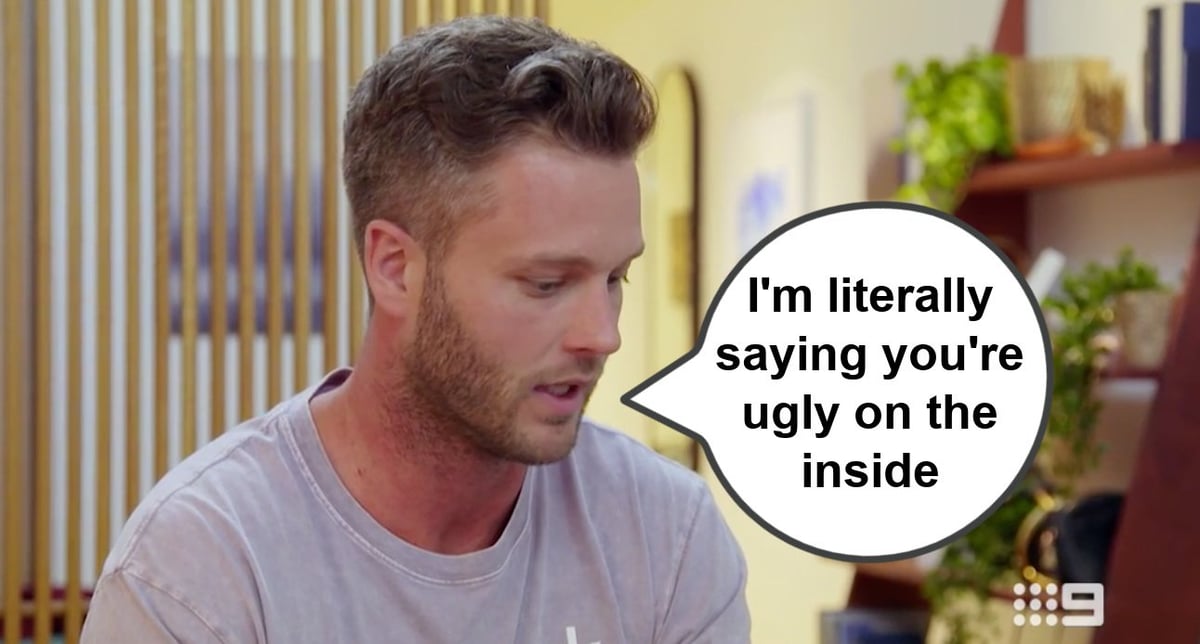 I want to be clear. 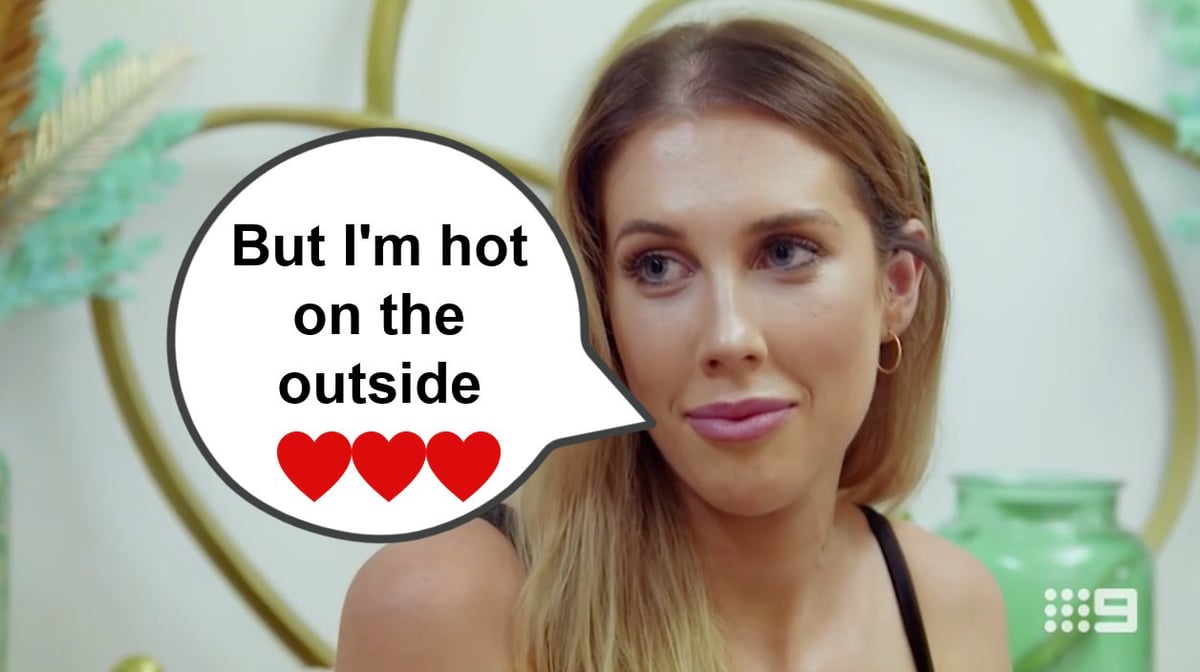 You see, Coco decides to invite Cameron over to her place, to talk about her husband Sam who Cameron happens to know from home.

She says she wants some insight into whether Sam is always like this and Coco, pls. We've never met Sam and we could tell you with absolute authority that he is... always like this.

When Cameron arrives he says, "I personally think he's a pig".

OK. So this is just a bitching session about Sam. And we're here for it. 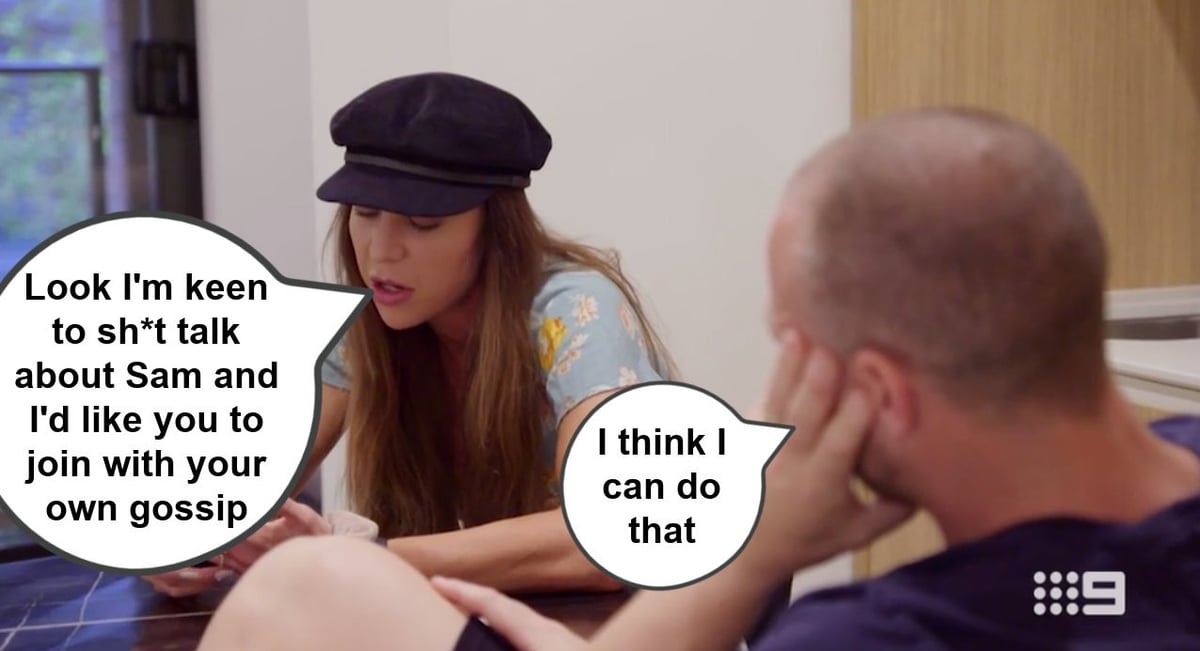 'Thank you.' They go on to have the best night of their lives laughing about Sam/exchanging stories about Sam/thinking about Sam together in silence until Cameron mutters something about how he wouldn't have minded being matched with Coco and yes she likes that very much.

ALL WE WANT IS A CHEATING SCANDAL GIVE IT TO US IMMEDIATELY.