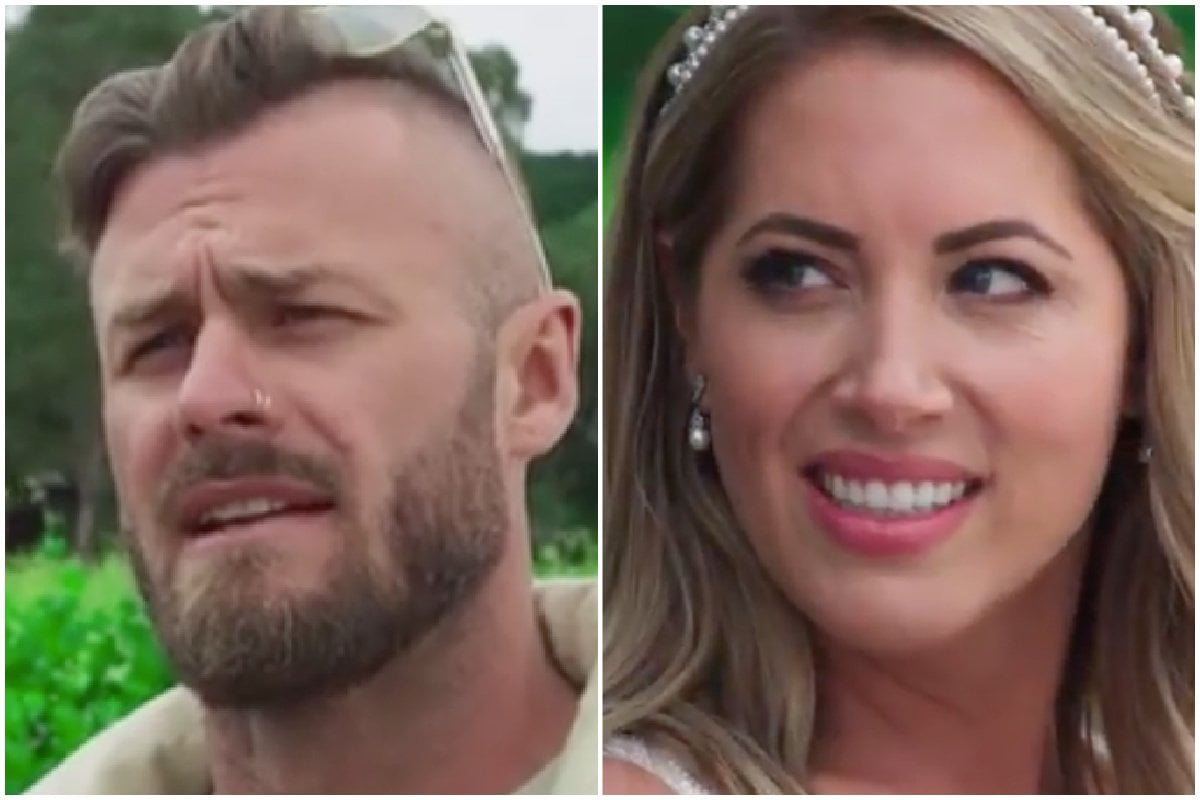 Our new couples have awoken the morning after their wedding smiling and cuddling and no. We've been through this process so many times.

We know it seems lovely.

But soon everything will go to s**t.

Speaking of s**t, James and Jo have decided to meet up following their reconciliation yesterday which sounds like a terrible idea.

Jo tells the camera, "I can't force myself to like someone," and sweetie you've summed up the entire problem with this show in one sentence.

"What's the point in being here?" she says and Jo we honestly ask ourselves that every night.

They reflect on the hurt and pain they've caused each other and may we remind everyone it has been three. weeks. of. marriage.

"Jo and I can be civil," James proudly tells the camera and, well.

Isn't that an achievement. (No.)

In Booka's apartment, she is kindly telling Brett that the ongoing joke about Brett and Patrick being in a romantic relationship went too far. 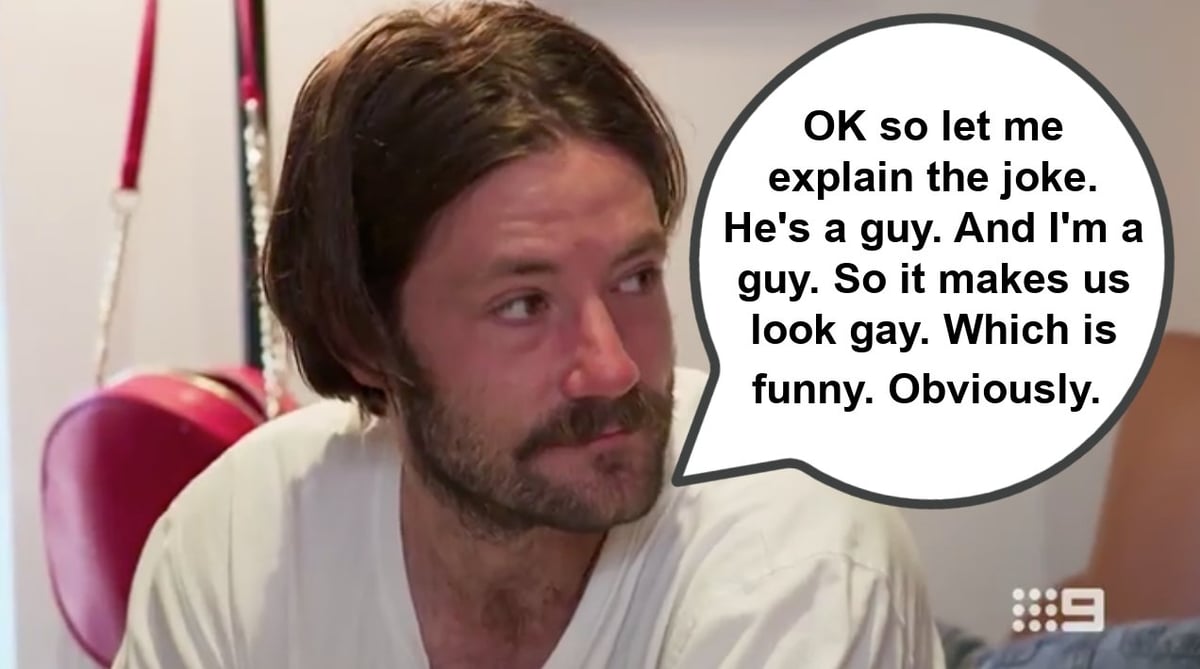 "Pretending to be a persecuted minority is funny. Do you get it yet?"

Brett helpfully explains to the camera that sometimes Booka can be a little "emotionally sensitive" and Sir. No one makes jokes about being gay anymore??

Booka explains that the girls were left out of the joke and it was exclusive. But what Brett hears is THE BOYZ WERE HAVING TOO MUCH FUN TOGETHER and that's... not. What Booka is... saying.

Perhaps the experts could help.

They explain that they're upping the "intensity even further" and no one has asked them to do that. 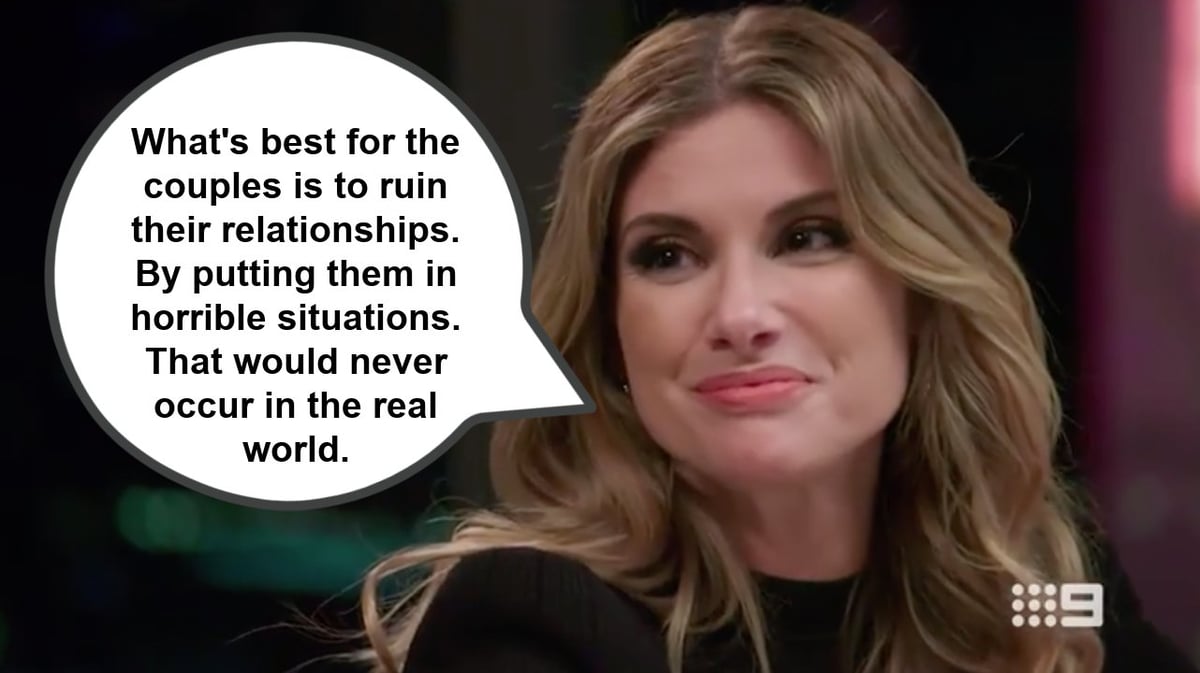 "As an expert, I think we should upset as many people as possible."

There will be a final 'secret' couple and all John Aiken can think about is how "striking" "attractive" but also "really good looking" the new groom Chris is.

John matches him with a woman named Jaimie, but he’d like to share a few disclaimers. A few ‘concerns’.

This is startling because the experts flagged no concerns with, say, Coco and Sam, who fundamentally did not get along, or Beth and Russell, who had absolutely nothing in common. So what is it John.

John points out that Jaimie lives an urban life while Chris works in the mines for several weeks at a time, and therefore their lifestyles may be incompatible. 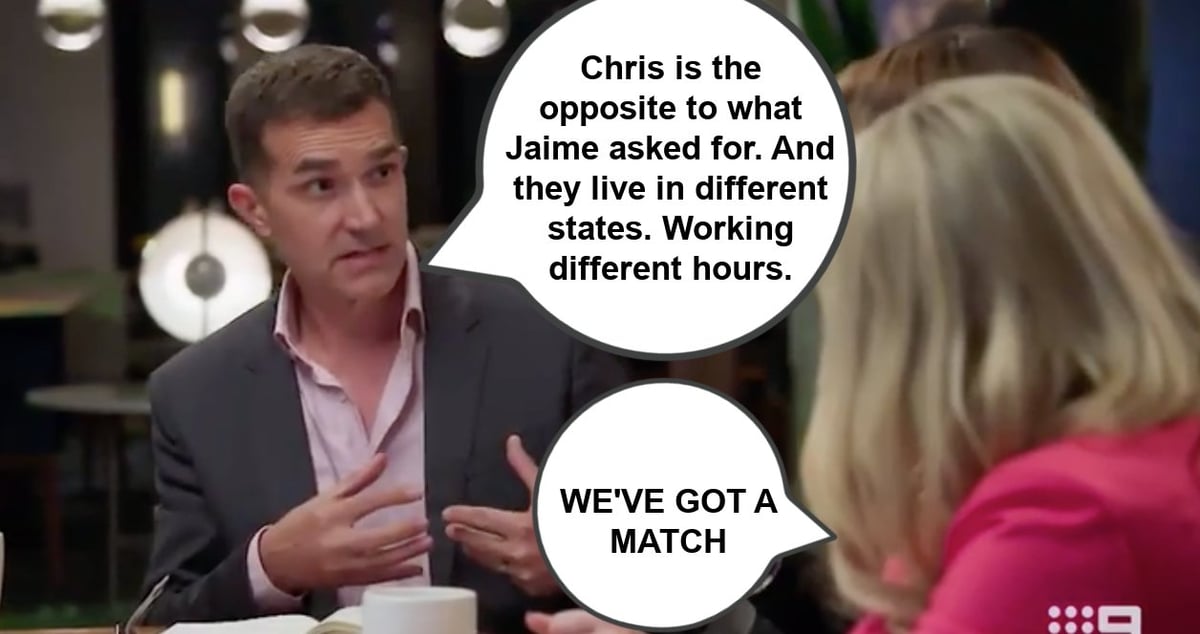 Alessandra optimistically says, “hopefully they’ll be able to see past the lifestyle,” and how can you see past your lifestyle it’s literally the basis of how you live your life.

This is going to end… abysmally.

Over on Liam and Georgia's honeymoon Liam is expressing his deepest desires to his new wife.

“Once you start fartin,'" he says matter-of-factly, before encouraging Georgia to... do a fart. 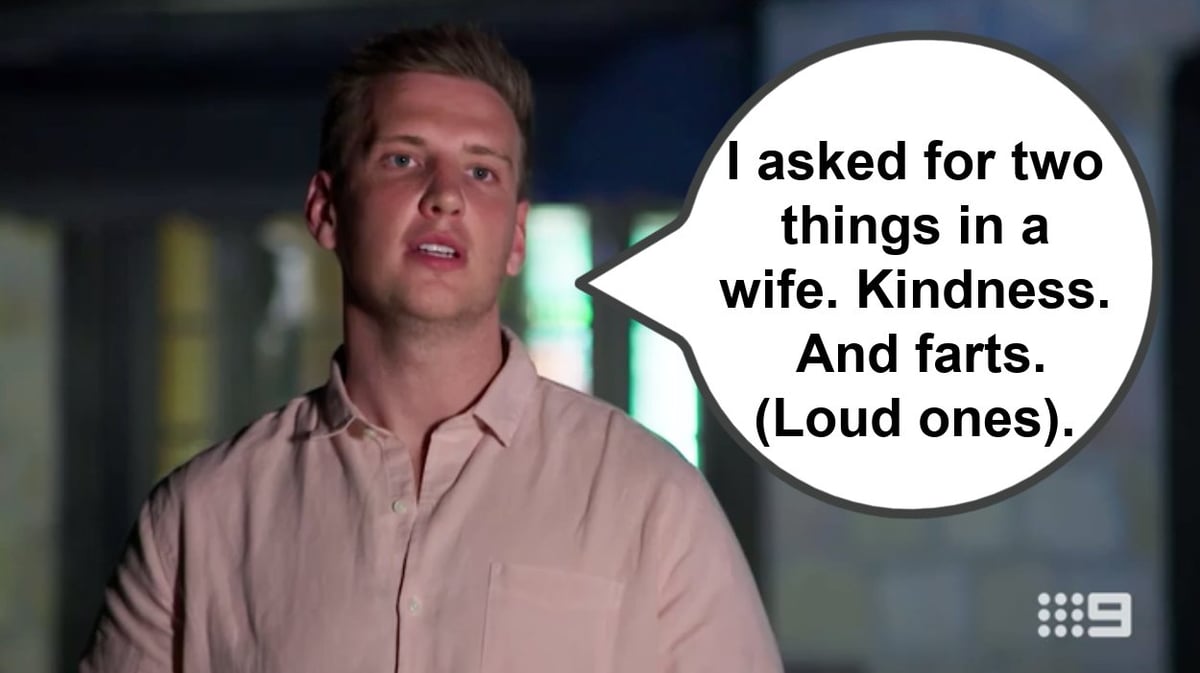 "I specifically asked for a farty wife."

"I’m just sayin' you can," he says, explaining that if she were to fart, she'd be the perfect wife.

OK. So it turns out Liam has a fart kink which is an unexpected plot twist.

But HUSH NOW the extra wedding no one asked for is starting, and the first thing the bride says is "Uh oh".

We learn that Chris has dyslexia and that while he doesn’t consider himself an ‘intelligent man,’ he is a ‘good man’, and Sir we’re starting to see why John Aiken was so smitten by you.

But Jaimie’s friends are worried she'll hate his hair, which is important. Unsurprisingly, Jaimie really does hate his hair but also the nose ring and are we just publicly s**tting on this poor (beautiful) man's appearance now?? 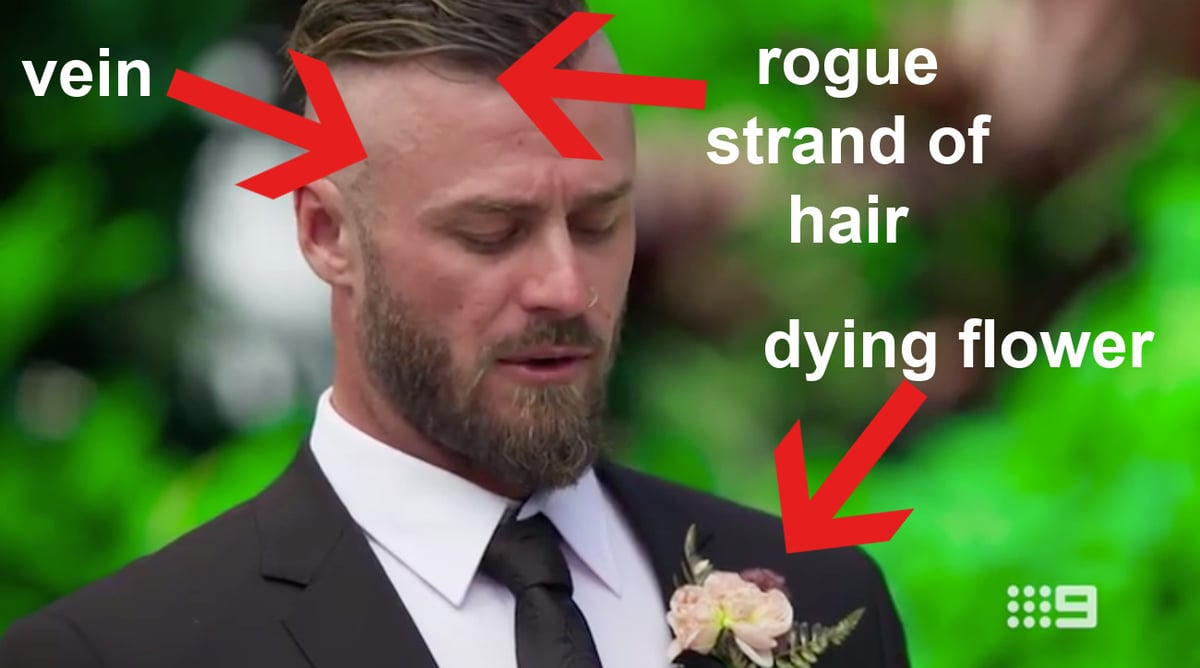 Chris stutters through his wedding vows because he’s so nervous, but mate, what is there to be nervous about you’re just marrying a complete stranger on national television in a format that is accessible to the entire Australian population but also our children and grandchildren.

At the reception, they talk about their hobbies. Chris says he likes exercise and yoga and scuba diving and Jaimie remains unimpressed and LADY. What more can this man OFFER. In terms of HOBBIES.

For reasons that are unclear, Chris is forced to speak in public again and he describes his big heart etc. but Jaimie is more concerned about his big tattoos and how much she viscerally hates them.

But the experts are growing concerned.

Two naughty couples appear to actually be falling in love. And it’s not conducive to winning the 7.30pm weeknight time slot. 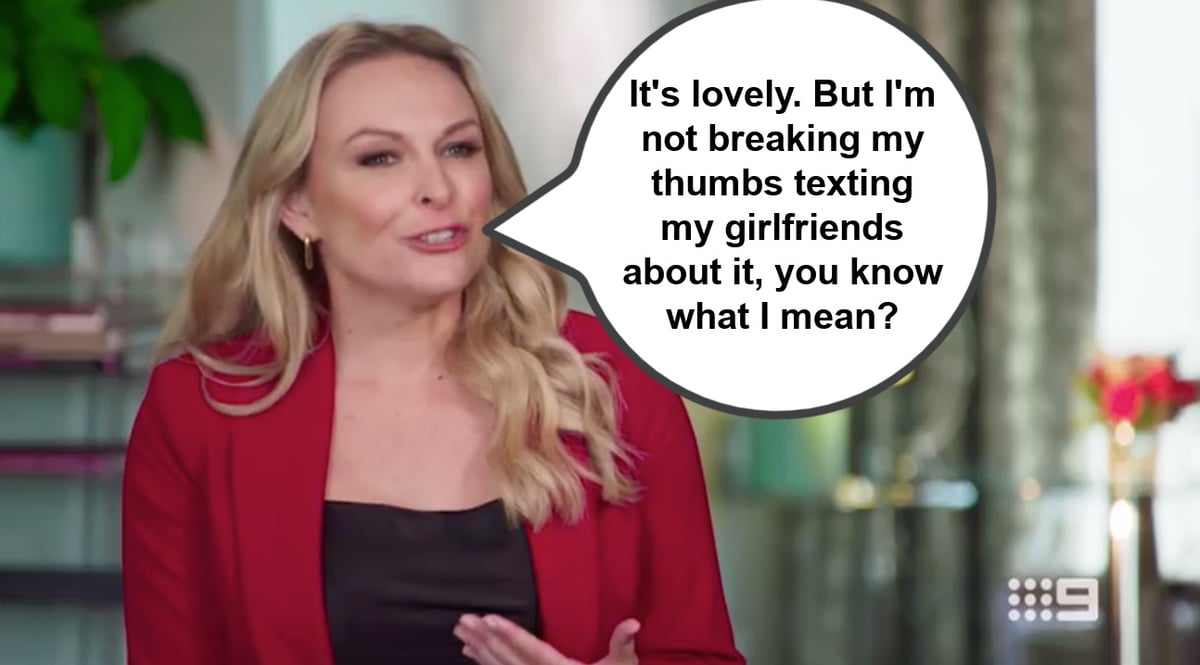 Honestly, good for them. But it's not on-brand.

Therefore, they set up a romantic dinner between Johnny and Kerry, and subtly tell Johnny beforehand to ask Kerry about whether her ex is texting her. While they’re lying in bed. Beside each other. On their honeymoon.

Indeed, he is. And Johnny is weirded out. “It makes me feel sick,” he says, and this, THIS is what gets ratings.

Now it’s time for the experts to try to ruin Liam and Georgia. You see, they’ve legitimately fallen in love.

Liam keeps saying he's never felt like this about anyone which is not the kind of thing that will get you prime real estate on The Daily Mail. From the corner of the screen we see a large brown box being flung at them, with John Aiken shouting "Honesty Box" in multiple different languages.

The question is: how many sexual partners have you had, and while Georgia has had five or six, Liam has had more than 50.

But Georgia doesn’t… care. Because she’s a normal, well-adjusted person who isn’t a) biphobic or b) slutshamey. Which is lovely.

That night they have sex for the first time and this isn’t what the experts were expecting but okay.

Luckily, Chris and Jaimie couldn’t be more badly suited to each other. On their honeymoon, Jaimie speaks to Chris exclusively in her native language: insults. 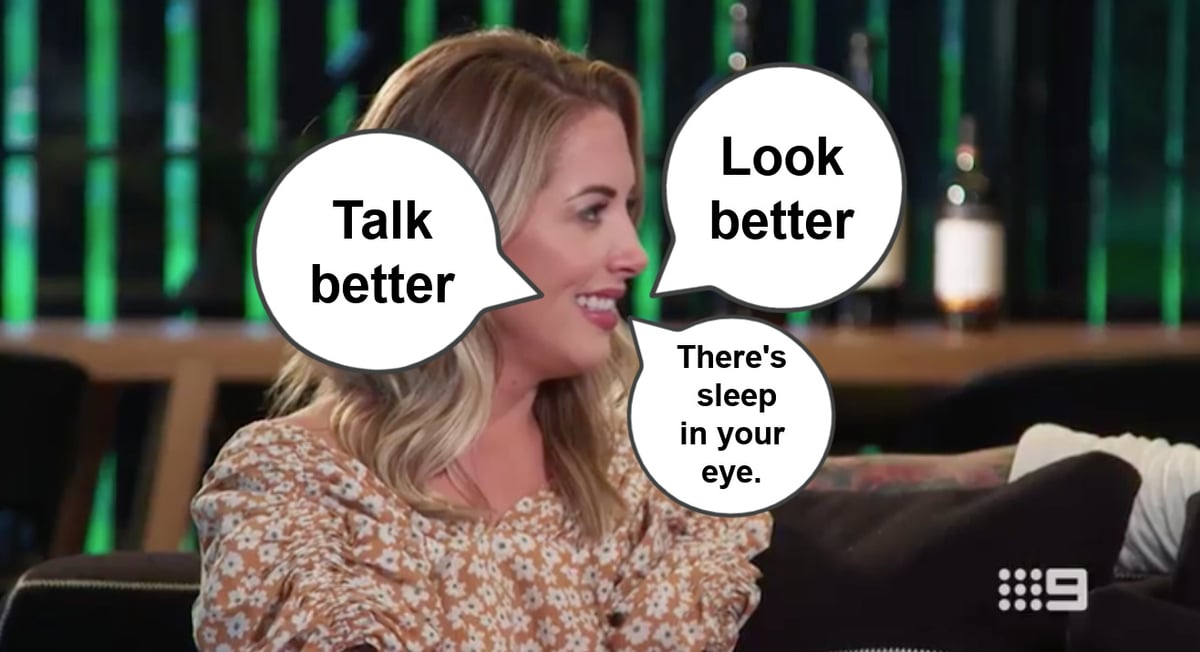 She makes fun of how he speaks and how he looks, adjusting his hair and asking him to ‘speak English’. Then, after Chris returns from the bathroom, Jaimie loses it.

‘DID YOU WASH YOUR HANDS,’ she shouts and okay yes there is a global pandemic but you can’t just yell at people to wash their hands.

He says he did and she asks to smell them before adding, ‘There’s soap for a reason you f**kin dirty grot’.

The next day, Chris takes her aside and explains that some of the things she’s been saying have been very critical and we’re going to cut to the chase: why are you bullying a grown man on the television.

Jaimie doesn’t compute. She reminds him that he saw her with her friends at the wedding and they pick on each other.

"It’s who I am and how I interact," she says and we don’t want to be rude but maybe you should… stop that.

D
davidc a year ago

Reply
Upvote
Hang in there ladies - you're doing just fine!
BTW anyone who has an odd way of spelling their ordinary name.....well it would be a worrying sign!
N
nifty a year ago