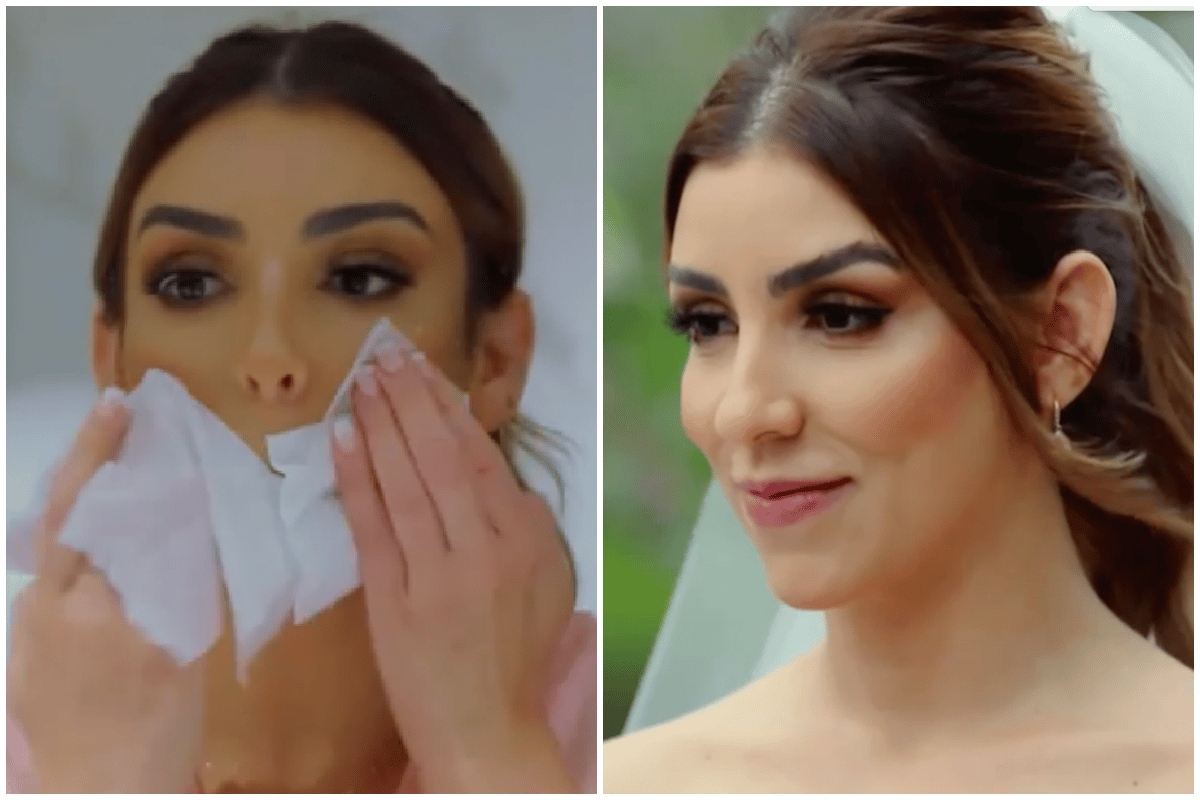 Despite the deeply dystopian mother/son relationship that is Al and Sam's marriage, we open with some news: Yeah, they had sex. And no, Al didn't brush his hair this morning. 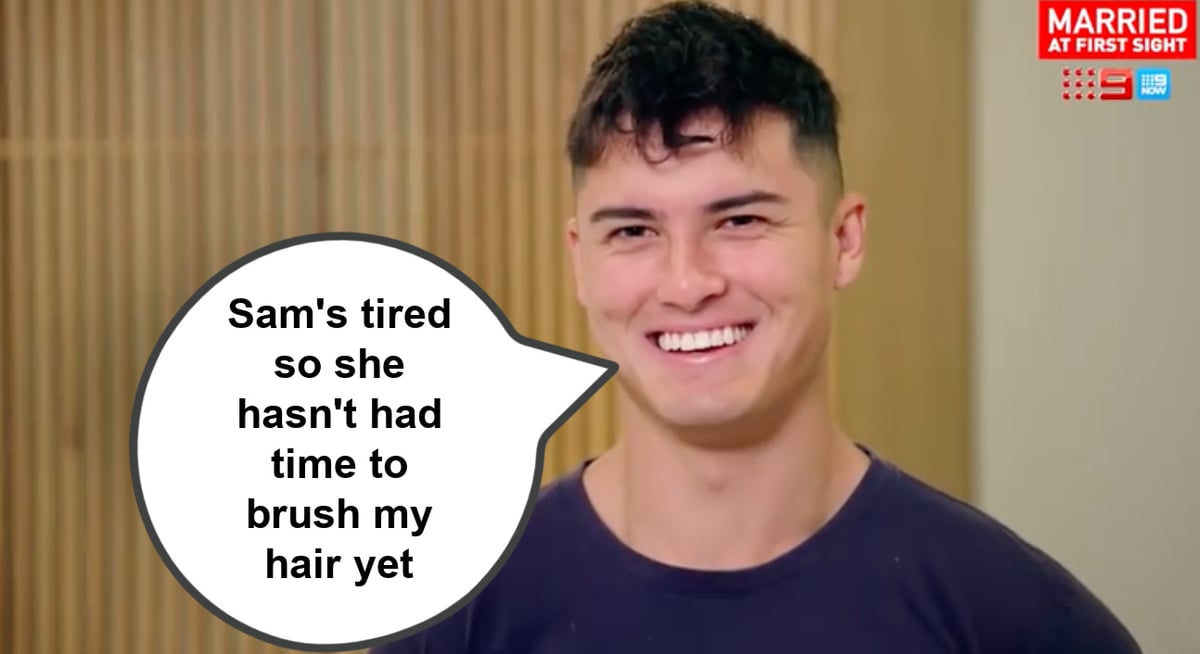 'Usually she brushes it straight after my bath.' Meanwhile, Brent and Tamara have decided to move on from the fight that no one - least of all the nation - understands.

"I think we'll grow from it," Brent says and OKAY BUT WHAT HAPPENED. WHAT WERE YOU WATCHING ON THE TV AND HOW LOUD WAS IT.

But hush now because the experts are doing what we all do when we fail at work. They're trying again, but without taking on any feedback or making any amendments to their process. They're hoping this time will be different, despite being roughly 100 per cent sure it won't be.

Are these matches any more likely to be successful? God no. Will they statistically increase the likelihood of someone ruining a dinner party during prime time? Absolutely.

First up we're introduced to Kate and Matt, and Mel want us to know they're 'mature,' which in reality-television-speak translates to 'old as f**k'.

At 38 and 39, John Aiken doesn't quite know what to do with such elderly people. Will they have dates in the nursing home? Perhaps they could play lawn bowls? Will they be able to develop a relationship between their hip replacements, he just doesn't know. But he shakes his head because this is an experiment about everyone finding love, even people who aren't 24. Even them. 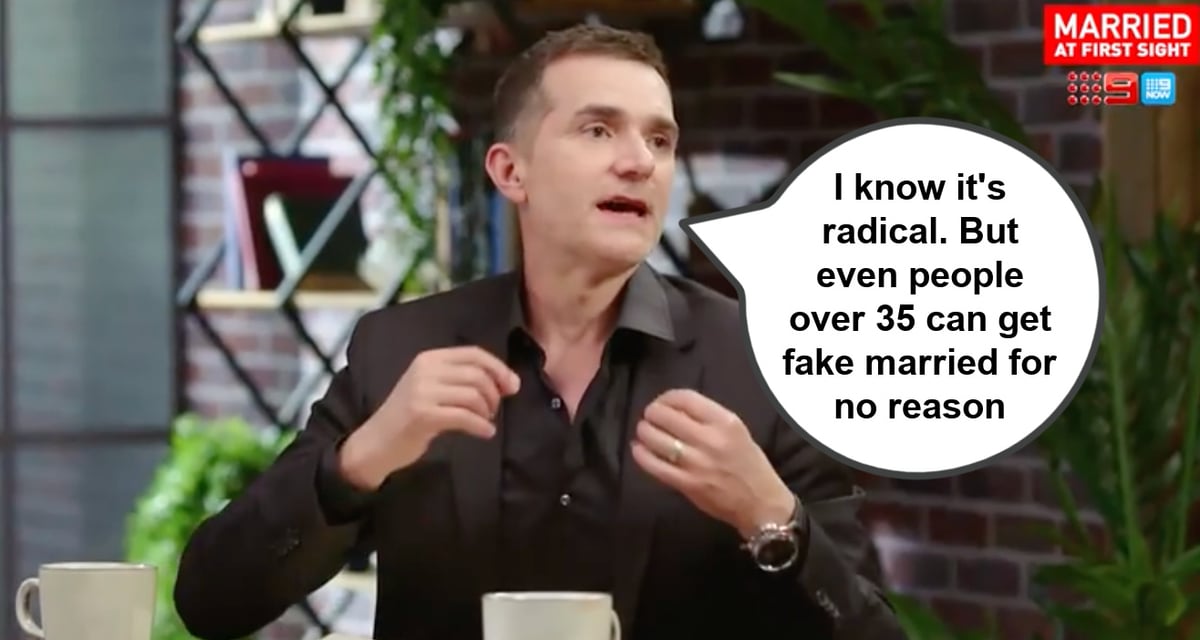 We learn that while Matt was in a six-year marriage and cared for foster children, Kate has never been in love. She was bullied at school for being 'ugly' and omg weren't we all.

"What are you watching?" Kate asks her sister. "Reality TV," she says and OKAY WE'RE ON THE TELEVISION HOW DID THIS HAPPEN.

They started a business together where they’re clinical nutritionists and same except our business is watching MAFS and then writing about it. Which is also a good career. 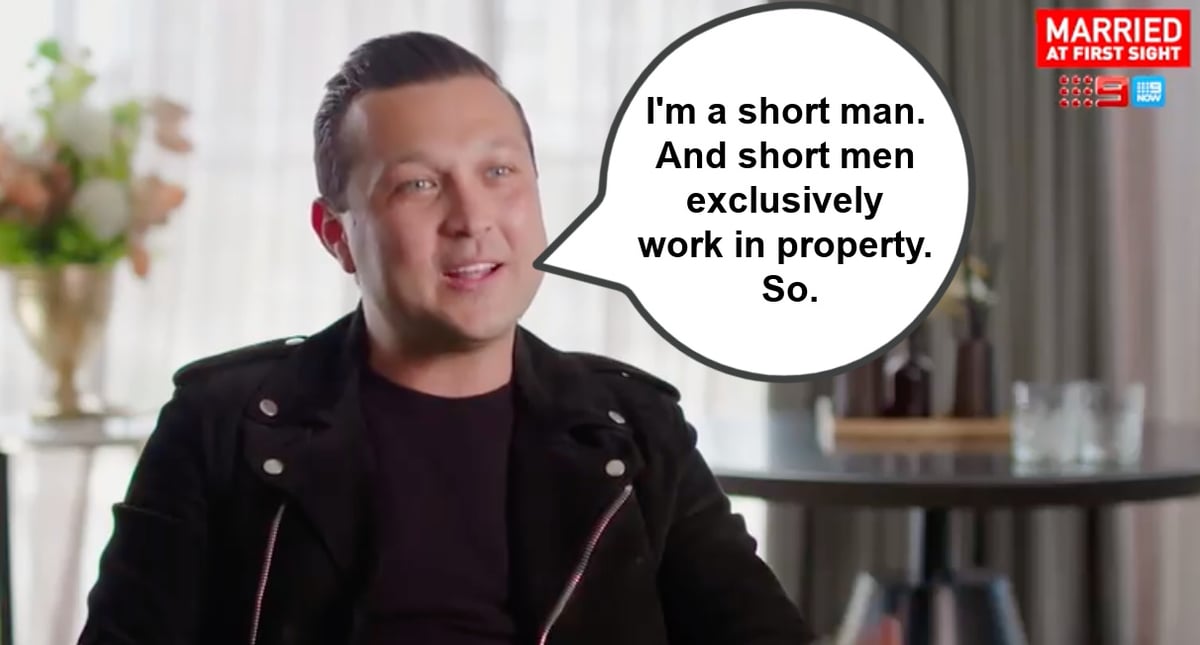 Where's the lie? Carolina, on the other hand, had a baby when she was 15. She moved to Australia and taught herself English, before starting her own handbag renting business.

"I think they’re a… layered couple…" John Aiken says nervously. "And I like… the look of them..." and Sir no one believes you least of all us.

It's time for Kate and Matt's geriatric wedding and you can tell Kate's twin sister is like: did you have to do this. With our face. 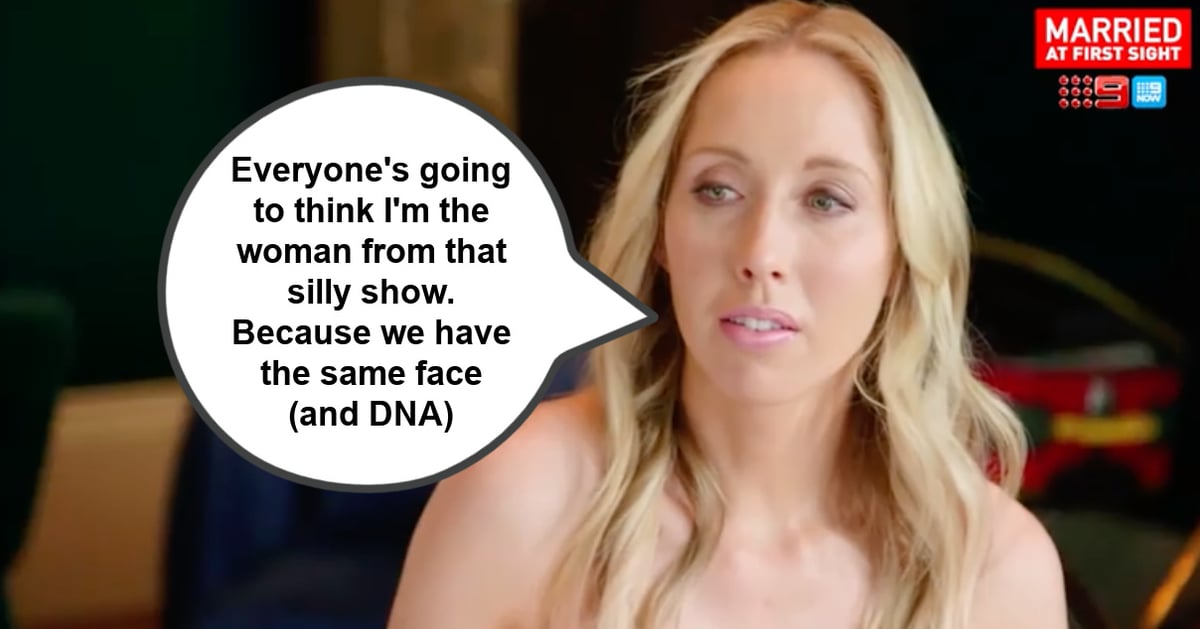 'Surely I have some control over what you do with our genes.'  Kate worries that she's ugly and turns to her identical twin sister for reassurance, who's clearly like 'ok f**k you'.

But then Kate meets Matt. And he does think she's beautiful. There's just one problem she hadn't anticipated.

This stranger she's met on the television is kinda random lol.

During the photos, Matt whispers darling come closer and okay we want to die. 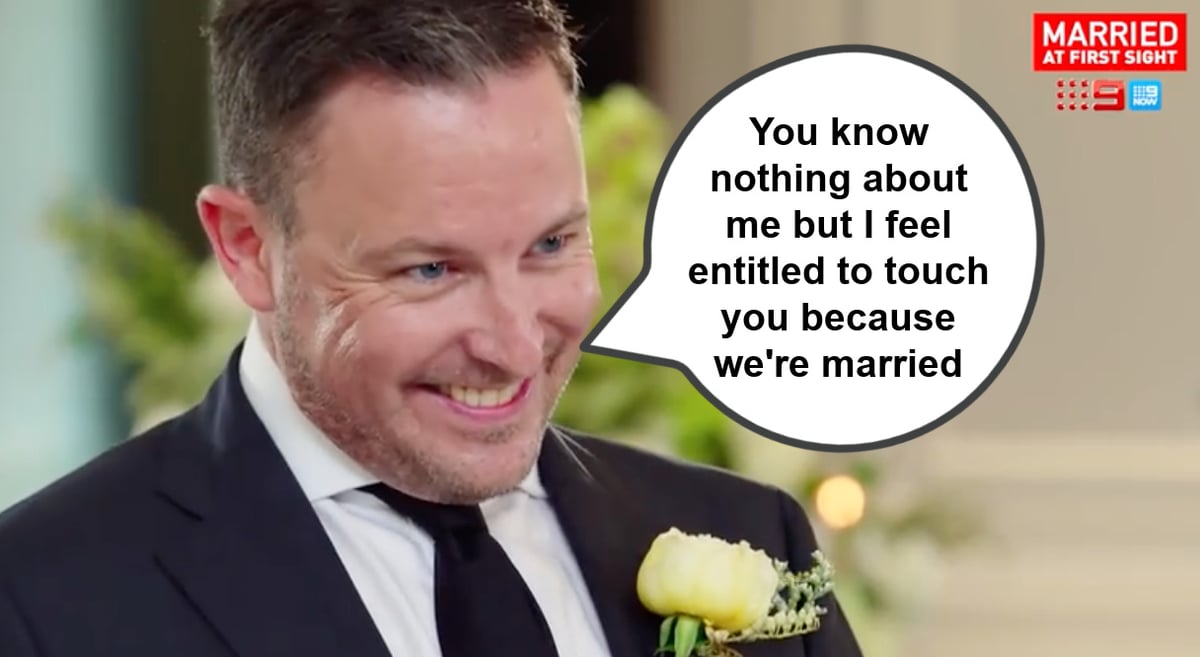 Eugh we HATE when that happens. While Kate wants this strange man to stop touching her, Matt tells the cameras, "I love a good kiss. And a good massage. And a good… sex."

Moments later, as he speaks directly into Kate's mouth, Matt says, "sorry about the breath, I just had chicken twisties" and MATE WHY. WHERE DID YOU EVEN OBTAIN A PACKET IN THE MIDDLE OF YOUR WEDDING CEREMONY. 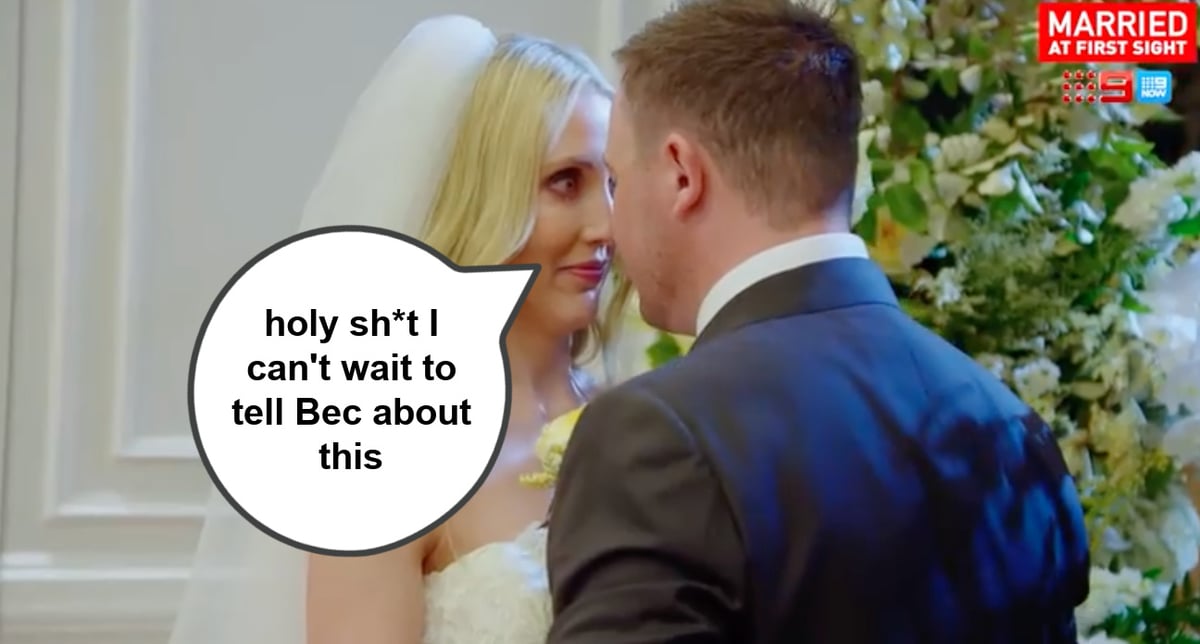 'Why does this sh*t always happen to me.'  Of course, one of Married at First Sight's favourite games is inviting the existing couples to the second round of weddings. But how does one behave at a fake wedding, especially when you're attending with your fake spouse of three weeks?

According to Domenica, you relentlessly yell insults about your partner until they break.

"HE DIDN'T FLUSH THE TOILET. TWICE!" she announces, while Jack rocks back and forth in a trance.

"HE DOESN'T BRING ME COFFEE IN BED, ONLY ON THE BALCONY," she adds and Domenica pls that is not a marital... issue. 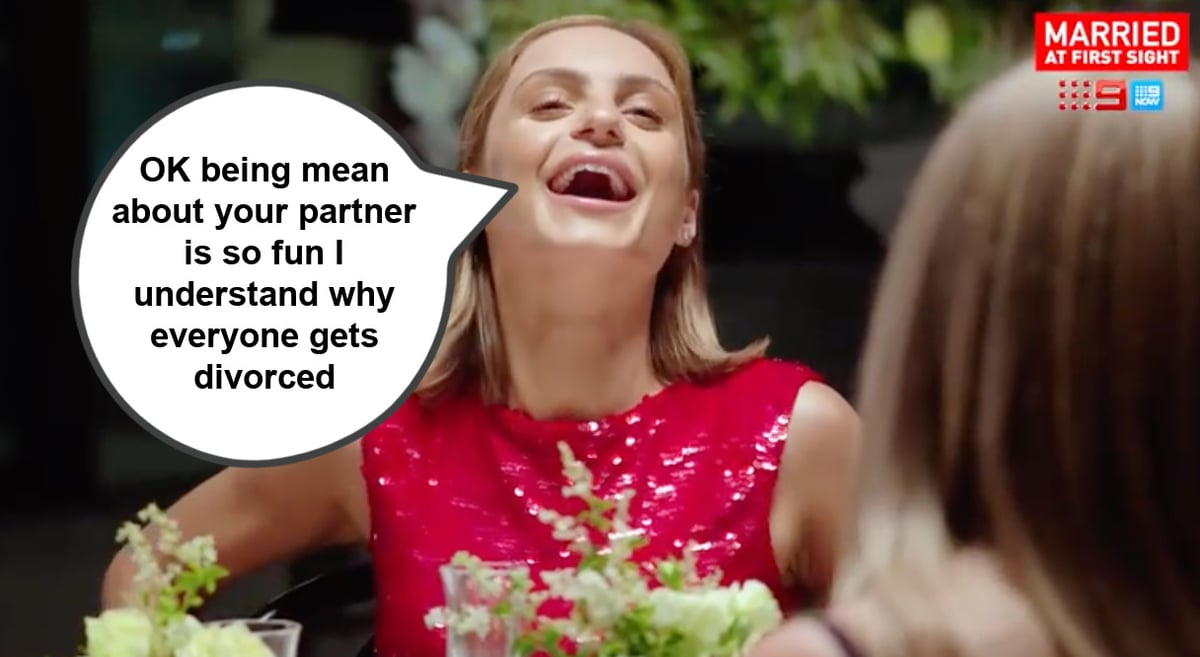 HE'S SO SH*T AT LIFE HAHA Jack quietly tries to tell Domenica that she's not being that... nice, and that she's exclusively yelled negative things about him for the entire event.

But Domenica's annoyed. Being mean about Jack is fun. And if he can't appreciate that then maybe they're not so compatible after all.

She attempts to apologise before adding, 'but....' and Liv interjects.

"Just say sorry, any apology with a ‘but’ isn’t an apology it’s an excuse," she says and okay we think we’ve heard enough from you, Liv. 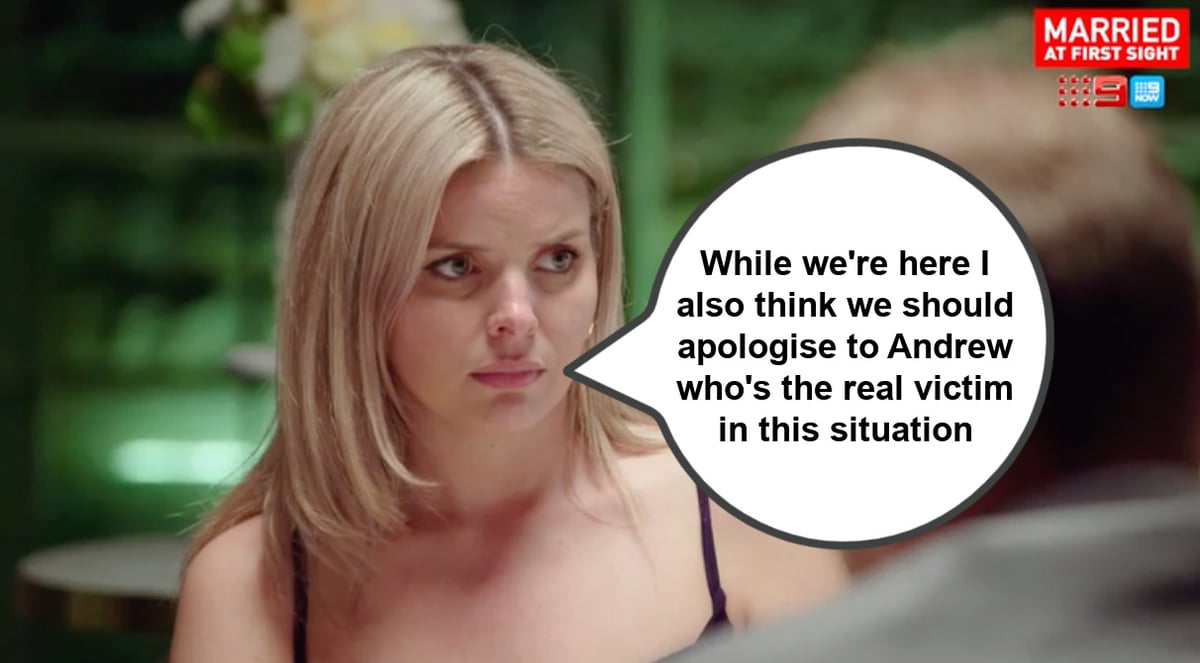 'It must be really hard for him to have such a big Texan d*ck.' The wedding ends with Kate asking Matt to please touch her less and him saying "yes we'll work up to that" and Kate looks at him as if to say we'll work up to nothing, Matt. How lovely.

Over at Carolina and Dion's wedding day, Carolina has been in the makeup chair for hours. She finally sees her reflection and says simply: "Um, I actually hate my makeup. Yes."

Honestly, we've thought that many, many times but never said it out loud. So, respect.

She goes on to explain that the contour is too thick and asks if she can do it herself and her makeup artist is affronted.

At the wedding venue, everyone has arrived. A producer tells Carolina she's already an hour late and "we're running out of time" but the woman will not be rushed. 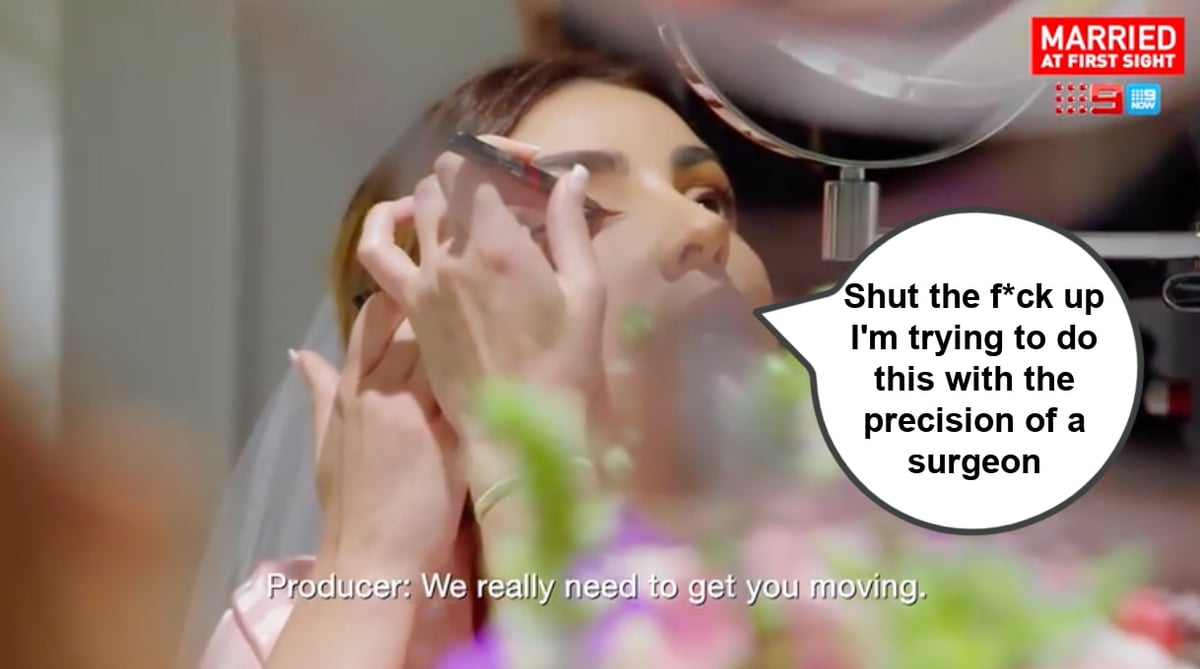 'I can't emphasise how much I hate my makeup.' "I hate how I look right now," she says and okay.

May we address the elephant in the room. And yes it is in regards to the angle of Carolina's bronzer.

We just. It wasn't quite right.

Carolina floats the idea of washing her face and starting again.

The producers say no.

Her bridesmaid says no.

But Carolina's face is in the fckn sink and let's start that base again, pronto. 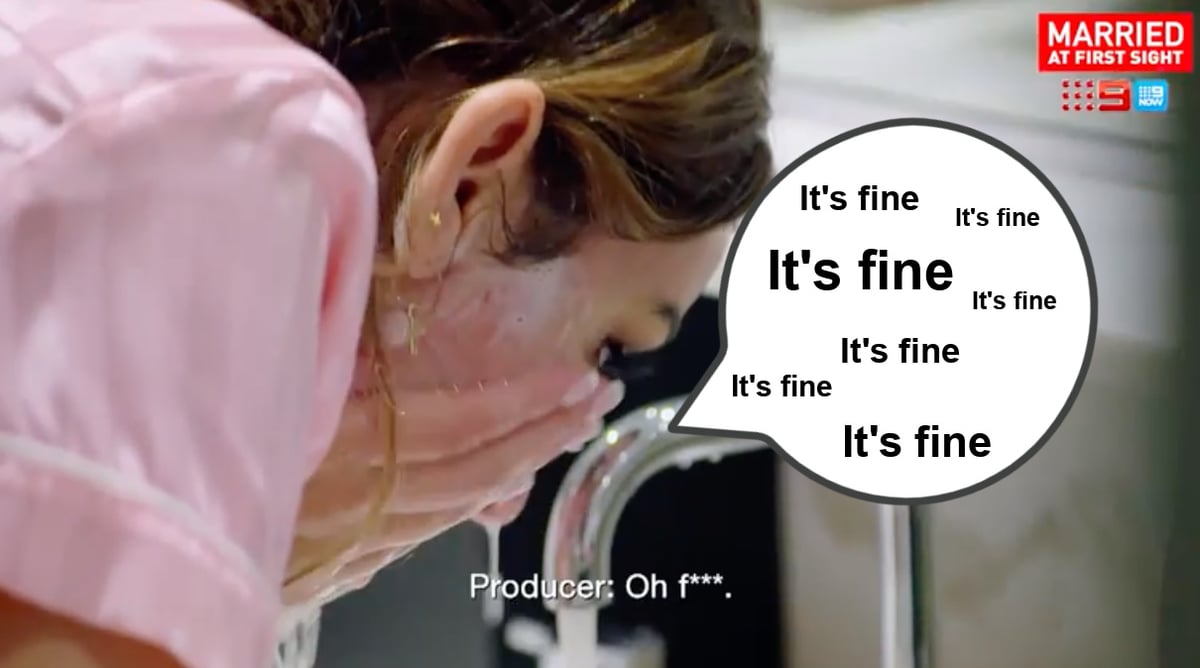 Nothing is remotely fine right now. The camera man shrieks.

"SHE'S DOING IT," a voice shouts and okay but the confidence of a woman to wash her face and start her makeup again when her wedding started an hour ago is something we should all aspire to.

Carolina fixes her makeup and yeah, it looks good. On the way to the wedding - which they are now three hours late for - a producer asks her if she feels guilty for holding everyone up.

But she doesn't. Because her makeup wasn't right like did you see it????

"I know that I’m late," she says. "But I know myself… there’s no point pretending to be someone else," and okay that's the attitude we will take into every social event in the future. 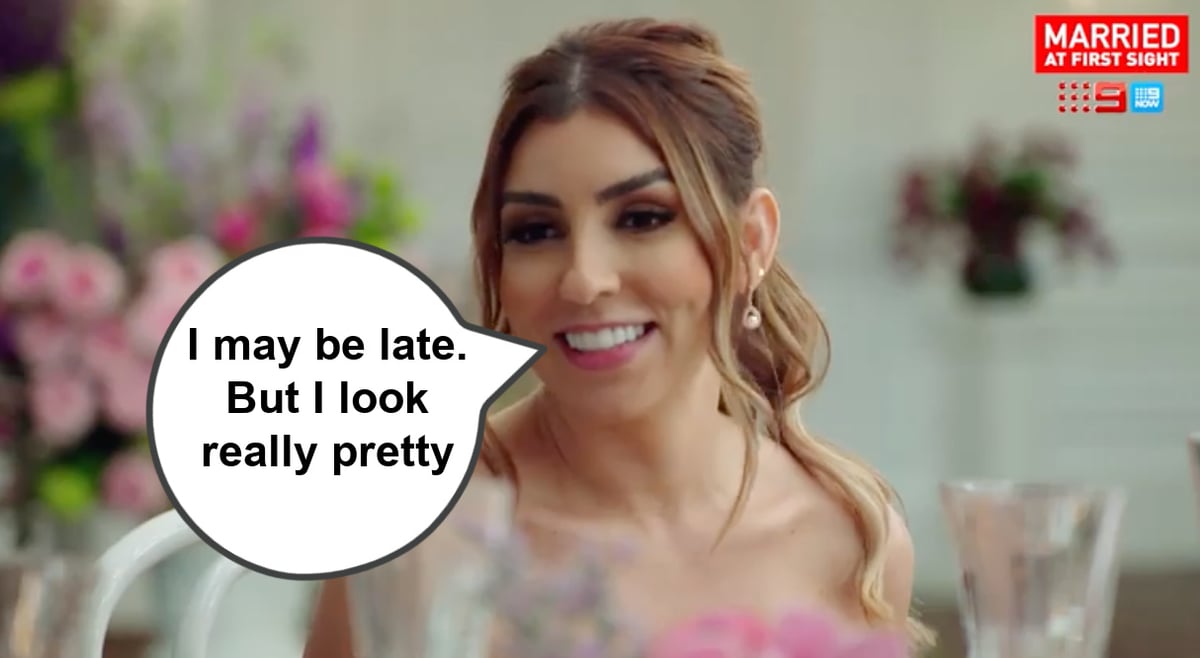 Look at my contour.  Carolina and Dion quite like each other, but Carolina is so flustered by her traumatic contour experience that she forgets to tell him she has a 16-year-old son.

A friend of Dion's confronts Carolina about the time she didn't tell Dion about her kid even though they've been married for 25 minutes now and it's like ok it's been a really stressful day?? Like give the woman a minute?

For some reason Dion's friends conspire to tell him the 'secret' and it's the most awkward thing we've ever seen. They keep trying to tell him off camera but the camera is always there because this is Married at First Sight and they'll intentionally screw up your wedding makeup but they won't miss the gossip.

Eventually Carolina tells Dion about her son and look. Is it a dealbreaker? Maybe. But at least she doesn't have ugly f**king wedding photos.

The Twins recap Married at First Sight episode 13: A burning question for Brent and Tamara.

The Twins recap Married at First Sight episode 12: The most manipulative night we've seen on television.

The Twins recap Married at First Sight episode 11: Andrew needs to be stopped.

The Twins recap Married at First Sight episode 10: The couple that can't stop fighting about sex.

The Twins recap Married at First Sight episode 9: The groom's decision that 'doesn't make any sense'.