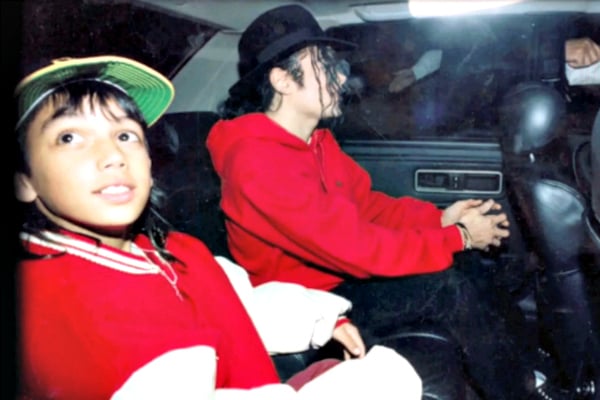 When a young Wade Robson watched on TV as his idol and friend Michael Jackson whisked another little boy into his black SUV to go away with him on tour, it broke his heart.

That was supposed to be his seat at Jackson’s side, but the King of Pop had told him kids weren’t allowed on tour that time around.

Except for Brett Barnes.

At the time, Robson couldn’t understand what he had done wrong for his best friend to replace him with someone else. In hindsight, he now understands Jackson “didn’t like to mix [them], he liked to keep the relationships separate”.

In HBO’s two-part documentary Leaving Neverland, which aired on Friday and Saturday nights on Network Ten, we not only hear details of the alleged systematic sexual and emotional abuse Robson and James Safechuck experienced at the hands of Jackson, but also just how deeply Jackson’s relationships with ‘other boys’ affected them.

You can watch the Leaving Neverland trailer below, post continues after video.

Robson and Safechuck say they felt pushed out and forgotten, replaced by Barnes and child actor Macaulay Culkin.

Both Barnes and Culkin have consistently denied ever experiencing a sexual relationship with the Thriller singer during their youth. But what did their relationships look like?

Here’s everything we know about Michael Jackson’s ‘other boys’, Brett Barnes and Macaulay Culkin.

Who is Brett Barnes?

According to writer and journalist Diane Dimond, in her 2005 book Be Careful Who You Love: Inside the Michael Jackson Case, Jackson and Barnes first met in 1987 when Barnes gave a fan letter to Jackson through one of his backup dancers during a concert. He was just five years old.

Four years later, Barnes began making trips to the Neverland Ranch both with and without his family, The Telegraph reports.

We know very little about Jackson and Barnes' time spent together - Barnes was not interviewed for Leaving Neverland as the film's director Dan Reed said he isn't in the business of outing anyone who denies the abuse allegations.

In 2003, when another of Jackson's boys, Jordan Chandler, accused the singer of sexual misconduct, Barnes defended Jackson.

When asked about sleepovers with Jackson at Neverland, Barnes claimed he “slept on one side of the bed” while Jackson “slept on the other” side and he did not find that unusual, The Sun reports.

He has also told reporters in the past that Jackson "kissed you like you kiss your mother," and that it wasn't unusual for him to "hug, kiss and nuzzle up to you and stuff".

During Jackson’s 2005 trial, Barnes testified that Jackson had “absolutely not” molested him.

Barnes is now 37 years old, The Tab reports, and is believed to be living in Australia.

In 2019, an unverified Twitter account exists under Barnes' name and tweets information in support of Jackson, including news stories and videos, and re-tweets from Jackson's relatives.

When Leaving Neverland premiered at the Sundance Film Festival in January, 2019, Barnes tweeted:

"So people are getting their facts from a movie now? I wonder how they feel about the documentary showing the great alien invasion of ‘96. I think it was called Independence Day."

"Not only do we have to deal with these lies, but we’ve also got to deal with people perpetuating these lies. The fact that they fail to do the small amount of research it takes to prove these are lies, by choice or not, makes it even worse."

Barnes also tweets every year on Jackson's birthday, calling him his best friend and "my brother".

So people are getting their facts from a movie now? I wonder how they feel about the documentary showing the great alien invasion of ‘96. I think it was called Independence Day.

Not only do we have to deal with these lies, but we’ve also got to deal with people perpetuating these lies. The fact that they fail to do the small amount of research it takes to prove these are lies, by choice or not, makes it even worse.

What happened between Michael Jackson and Macaulay Culkin?

Many will always think of Macaulay Culkin as the loveable Kevin McCallister in Home Alone and Home Alone 2.

For a time, he was also never far from Jackson's side.

According to People, Culkin first met Jackson when he was performing in The Nutcracker in New York City as a child. It wasn't until he was 10 that Culkin began visiting Neverland after he received a random phone call from Jackson shortly after Home Alone came out in 1990.

From what we know, Culkin and Jackson remained close until Jackson's death in 2009 - Culkin featured in Jackson’s 'Black or White' music video, and was chosen to be Jackson's daughter Paris Jackson's godfather.

In 2003, Jackson said Culkin and his siblings "would just jam in the bed" in the Living With Michael Jackson documentary, implying he and Culkin slept in the same bed in his bedroom at Neverland.

Like Barnes, Culkin has always denied having any sexual relationship with Jackson. In 2005, Culkin, then in his 20s, testified on behalf of Jackson in his child molestation trial, through which he was found not guilty of molesting another one of his boys, Gavin Arvizo.

In January of this year, Culkin, now 38, spoke about his relationship with Jackson on the Inside of You With Michael Rosenbaum podcast.

“It’s almost easy to try to say it was like weird or whatever, but it wasn’t, because it made sense... At the end of the day, we were friends.”

Have you watched Leaving Neverland? What did you think?

Paedophiles do not molest every child they come across. Culkin not being molested does not mean others weren't. In the same way a priest not molesting every orphan or every altar boy, does not mean the priest didn't molest others.
Don't forget that the Culkins were a big famous family in the industry. A respected powerful family. Paedophiles prey on vulnerable children; children from broken homes or from parents who are not savvy about the industry and easily groomed.

And lets be honest; if you were Macaulay, would you come out now when we know how hate-filled, dangerous and bat shit cray cray Jackson fans are?

Well said Salem! Just like serial killers don’t kill everyone they come across either. This is how they get away with it. They can appear harmless and normal to those outside of their selected victims.

And if Macaulay was a victim and doesn’t want to come out in public; that choice should be respected.