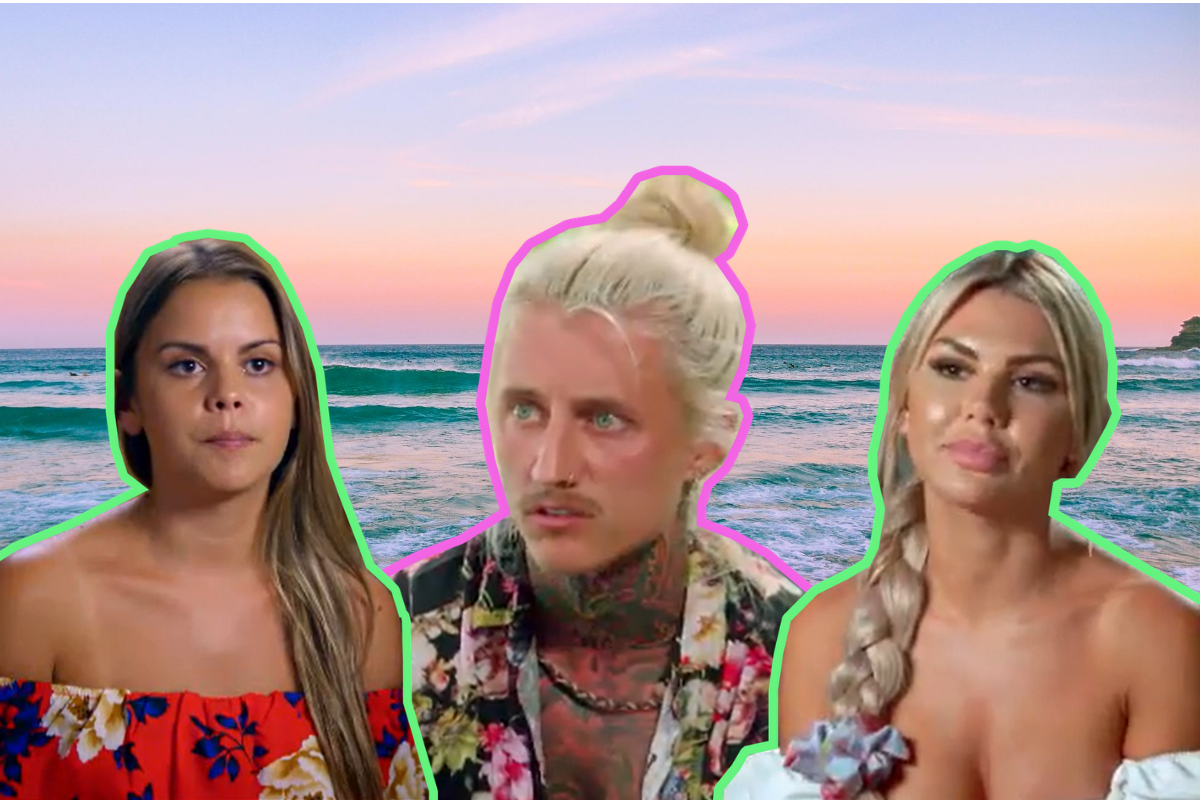 It's a brand new day in Paradise and everyone is happily coupled up.

Well... except for Alex and Keira.

"No shirts allowed today," Keira announces to the group.

He tells the group that there are no more singles arriving in Paradise and Alex and Keira respond... accordingly: 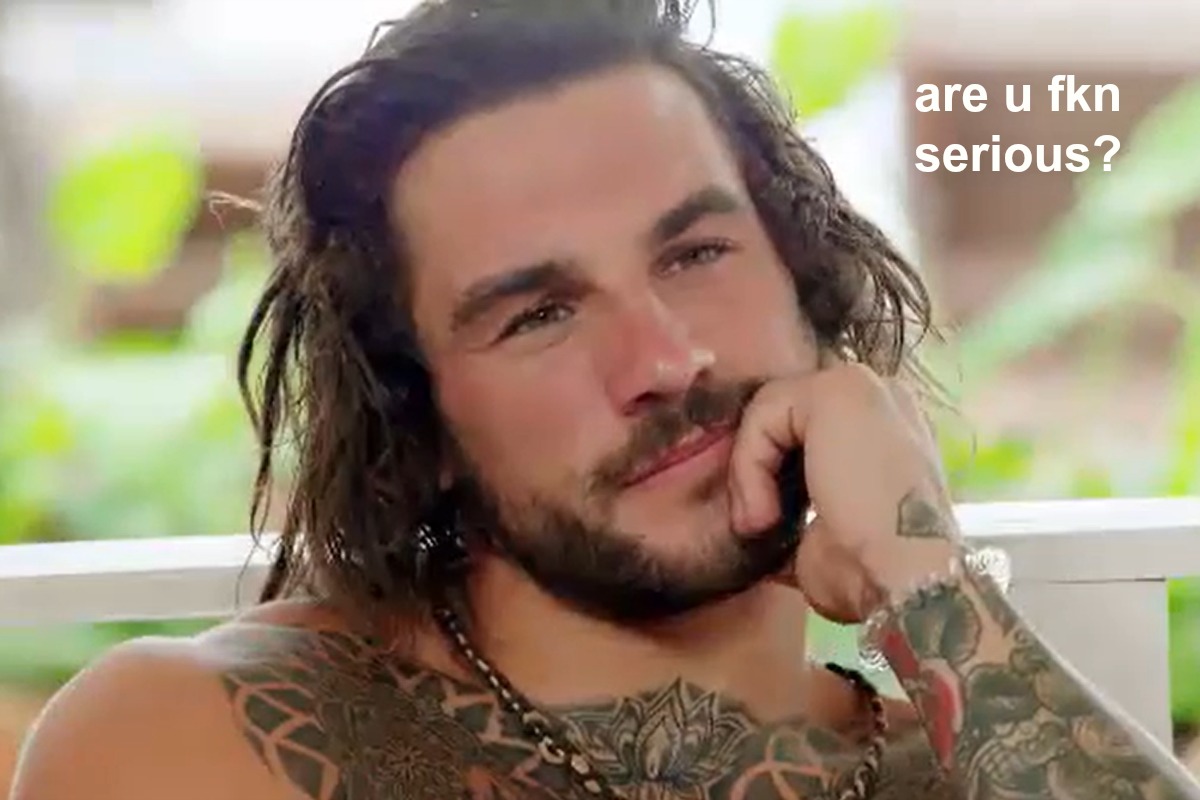 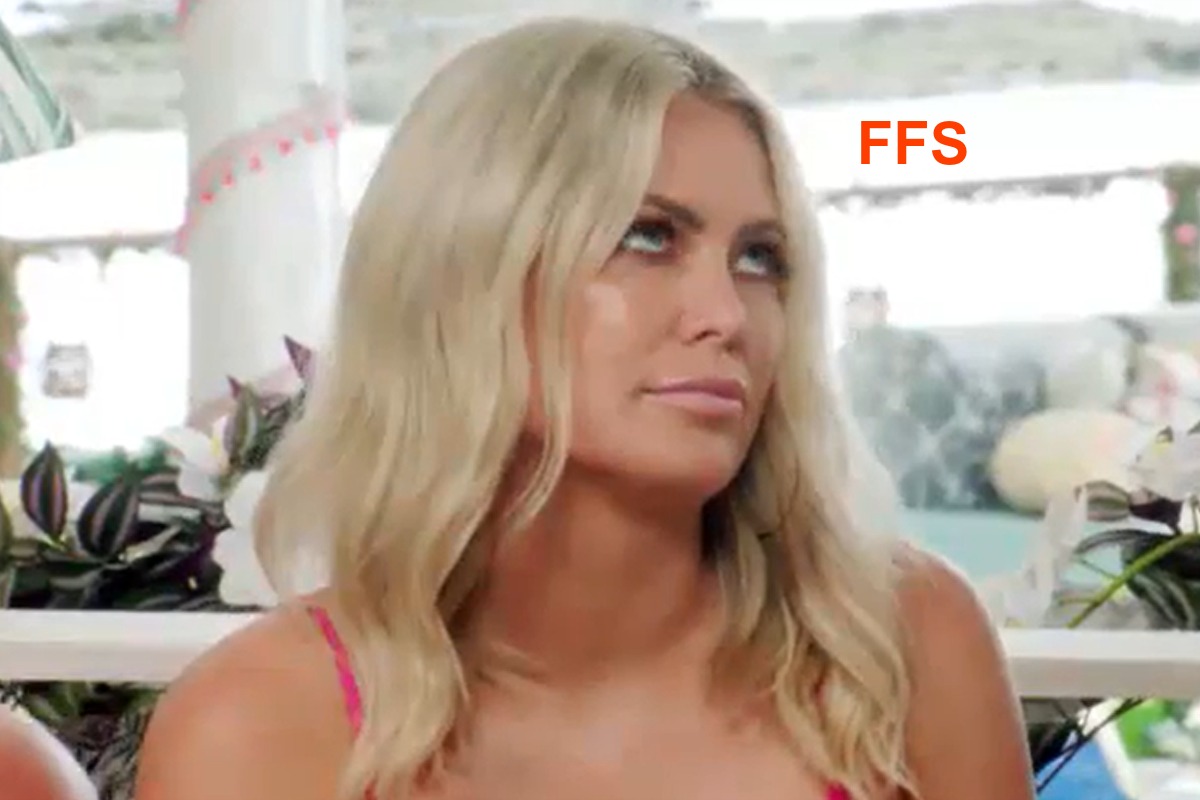 He announces that the remaining couples will have to construct rafts out of bamboo and rope "to put their relationship to the test" and wait, are we watching Bachelor in Paradise or Survivor?

After Osher departs, Keira makes it clear that she didn't come to Paradise to build a fkn raft.

"That means I don't have to pretend anymore."

What was the point of you staying then?

Keira takes Alex for a chat, and she tells him that she's ready to leave Paradise.

"I have made an executive decision," she tells him and uh, does Alex get a say orrrrr?

He thanks her for the experience, and Keira asks if they can make out one last time before they leave. 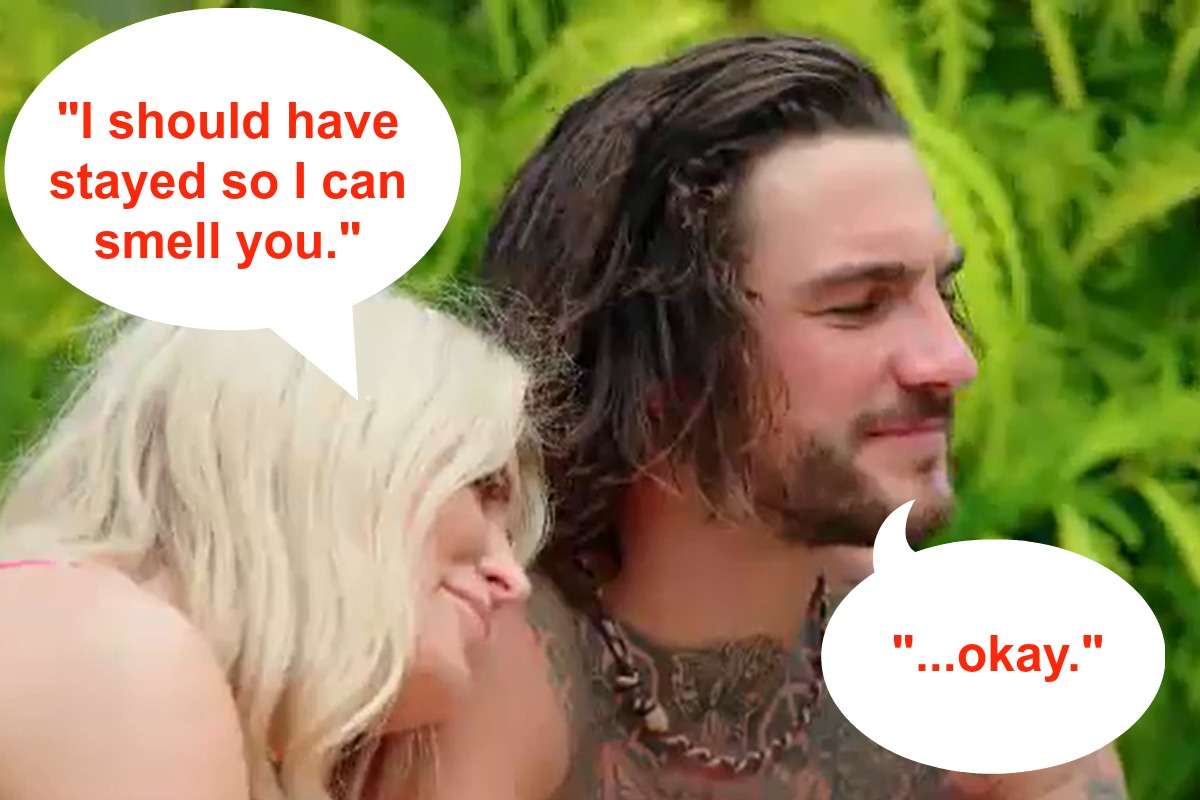 Can we make out or?

It's terribly awkward and literally no one speaks about their existence ever again.

We're back at the rogue Survivor challenge, and the couples are struggling to put together their rafts.

This show can't decide if it wants to be a) Survivor: Fiji Edition or b) Married At First Sight and pls, just stop... trying.

THIS IS A SHOW WHERE INSTAGRAM INFLUENCERS REALITY TV PEOPLE GET DRUNK IN FIJI. THAT'S IT. LET IT BE.

While the couples struggle with the challenge, John Aiken Steve Van Aperen, a.k.a "the human lie detector", is watching on and analysing the dymanics between the couples. 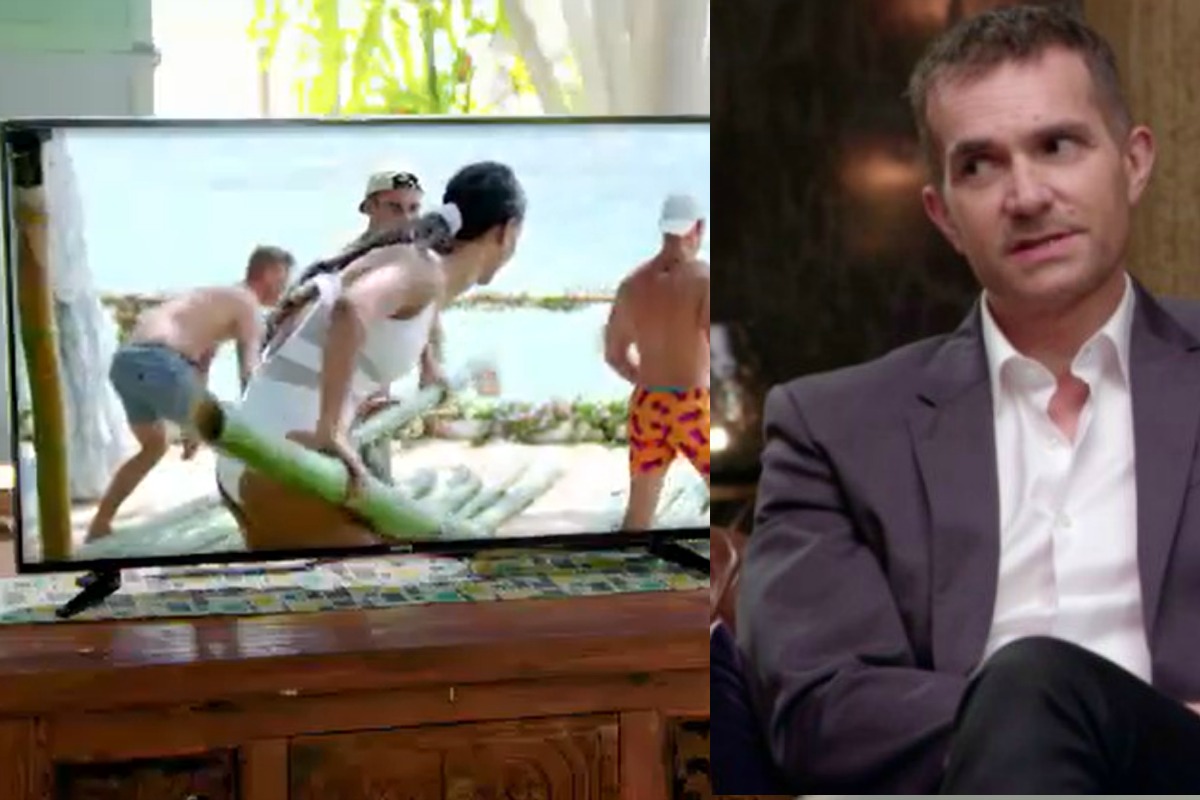 He points out that while Alisha and Glenn's dynamic appears "natural" and "organic", Renee and Matt aren't communicating effectively.

He also points out that Ciarran is the 'Alpha Male' in his relationship with Kiki and well, duh.

After racing their rafts in the water, Osher and his Hawaiian shirt return.

He introduces the contestants to John Steve and the couples laugh nervously.

Steve, on the other hand, is not exactly impressed.

I mean, we don't blame the guy. He's gone from working with the FBI to working with... Ciarran. 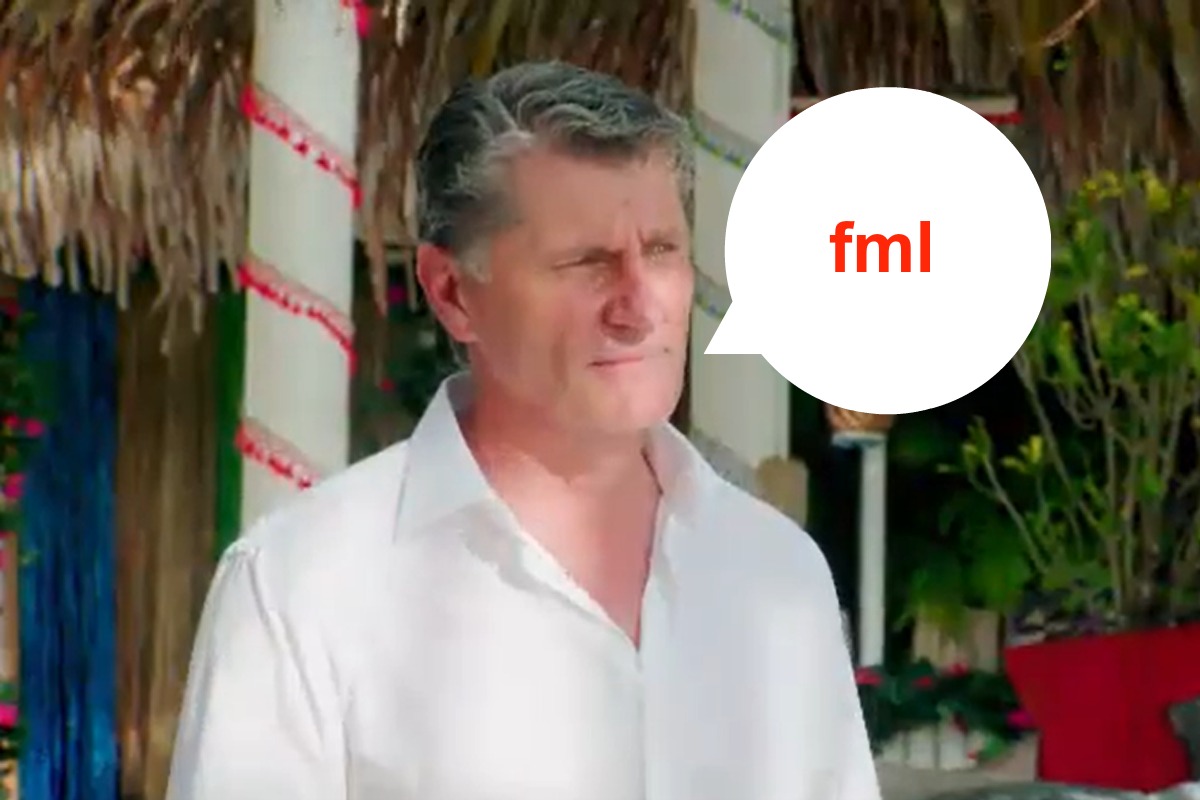 Osher tells the group that Steve will analyse them individually and as couples and Ciarran and Kiki are virtually sh*tting themselves.

The interrogations begin and Mary and Conor are up first.

Steve asks Conor whether he's ready to "be a step father" and Conor answers yes with no hesitation. It's all very cute etc.

It's time for Alisha and Glenn.

Alisha tells Steve that there was an instant attraction when she met Glenn, but she's a bit "nervous" about their relationship on the outside. 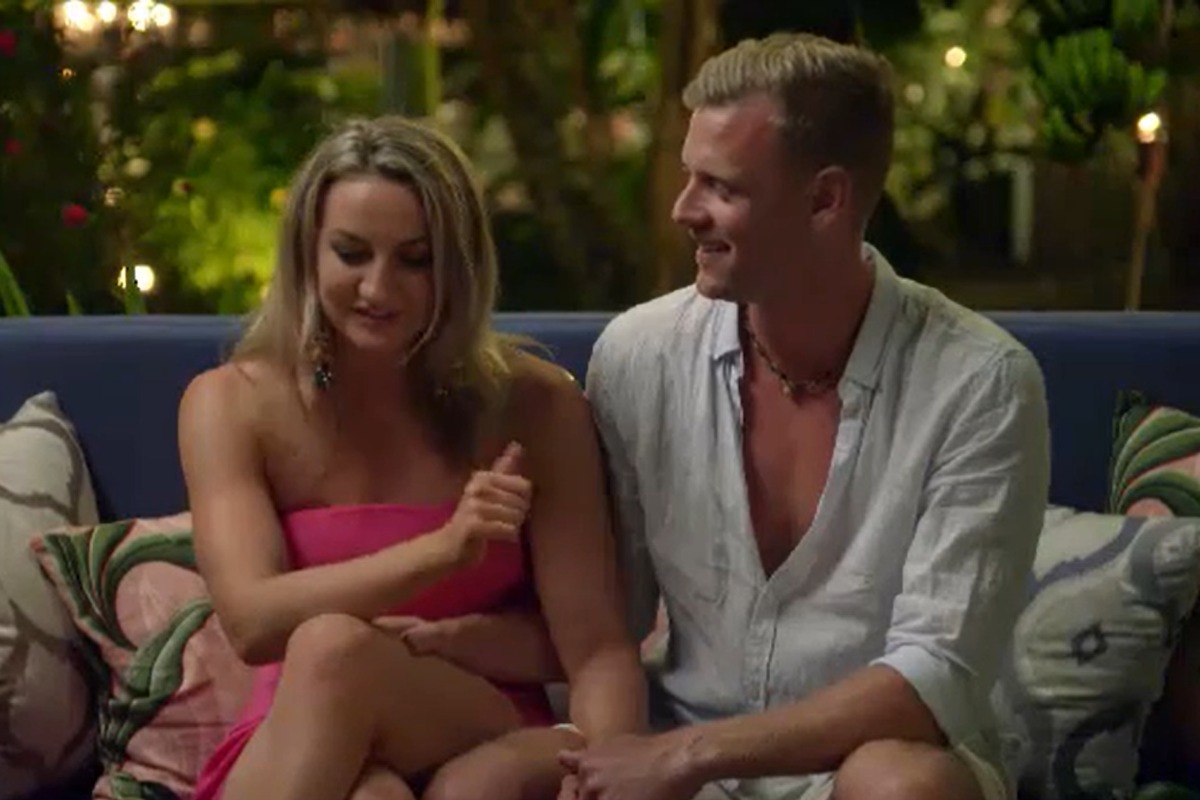 STOP. HOW ARE YOU SO PERFECT???

After Glenn joins the conversation, Steve tells them that he thinks their bond is "genuine".

"I have interviewed thousands and thousands of people," he tells them. "I can't find any problem with you two."

Is this a genuine relationship... on Bachelor in Paradise?

The next day, Alisha tells Glenn that she found a "$800 ring" for Ciarran in Renee's bag.

"That ring is date stamped with the date that Renee and Ciarran first got together," Alisha tells producers.

"I can't really work out why she brought the ring to Paradise or why she got it made."

Watch: The love lessons learned from Bachelor in Paradise. Post continues below.

Meanwhile, Matt and Renee are heading into their interrogation with Steve.

As expected, the conversation soon turns to Ciarran.

Steve asks him why he came to Paradise and he immediately answers: "I'm not looking for celebrity status or to be an influencer."

Why... did your mind go there then?

Ciarran then claims that he "doesn't know how to use Instagram", which is a 'lil bit weird for someone who has 134,000 Instagram followers, but okay.

Steve asks Ciarran whether he jumps from relationship to relationship, and he says... no.

"I'm having trouble believing what you're saying," Steve responds.

Ciarran, meanwhile, is starting to sweat. 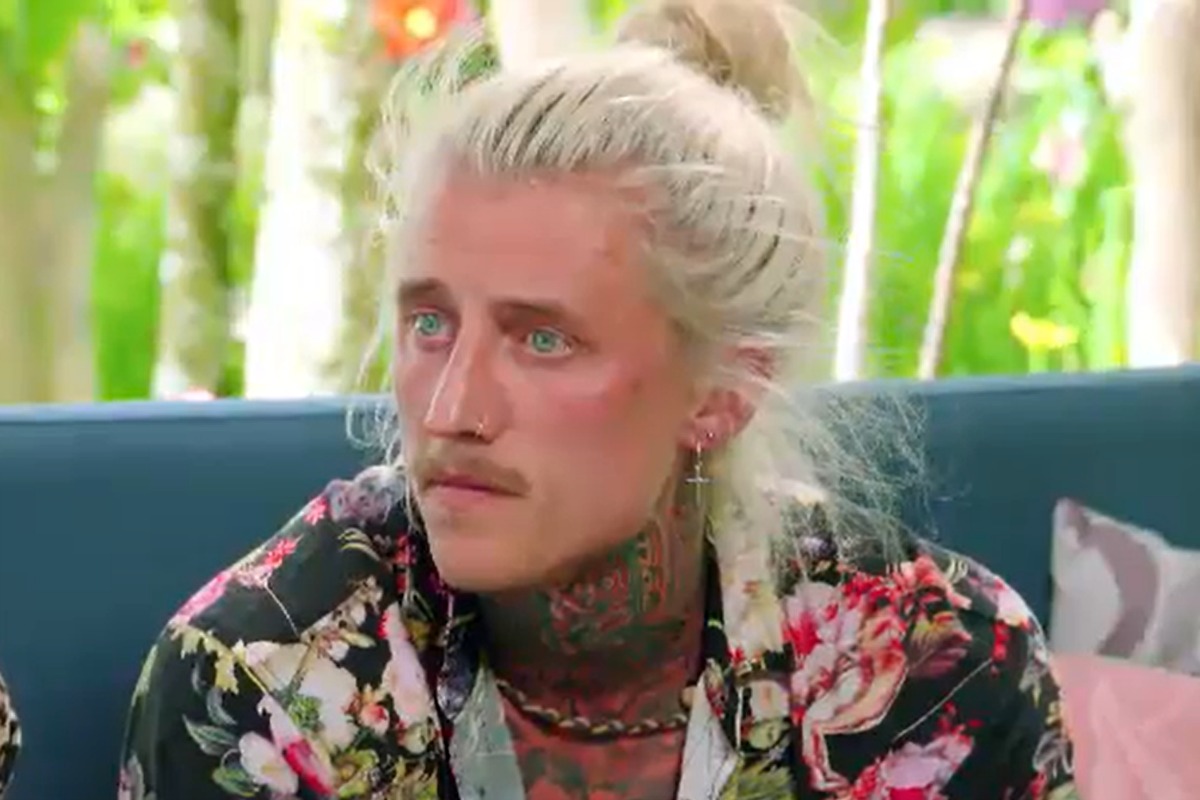 "Ciarran says he didn't come in here with a plan. I'm not buying it," Steve tells producers.

"I don't think he's the kind of person that would give [his past relationships] a second thought. Because he jumps from relationship to relationship... that's often not a concern. They're more concerned with themselves."

While Ciarran is speaking to Steve, Mary, Alisha and Renee are discussing Ciarran and Kiki's relationship.

Renee tells the other girls that she is worried that Ciarran is going to attempt to come running back to her after Paradise.

She tells them that they ended their relationship just one week before Ciarran flew to Fiji for Paradise, and that Ciarran was spotted with Kiki just three days after they broke up.

Elsewhere, Kiki is trying to calm down Ciarran, who is pissed after his interview with Steve.

"I'd rather discuss us than discuss other people. It looks good for us on TV to get committed," Kiki tells him, and did she really just say that?

Why are you here? This is a show to find true love, pls. 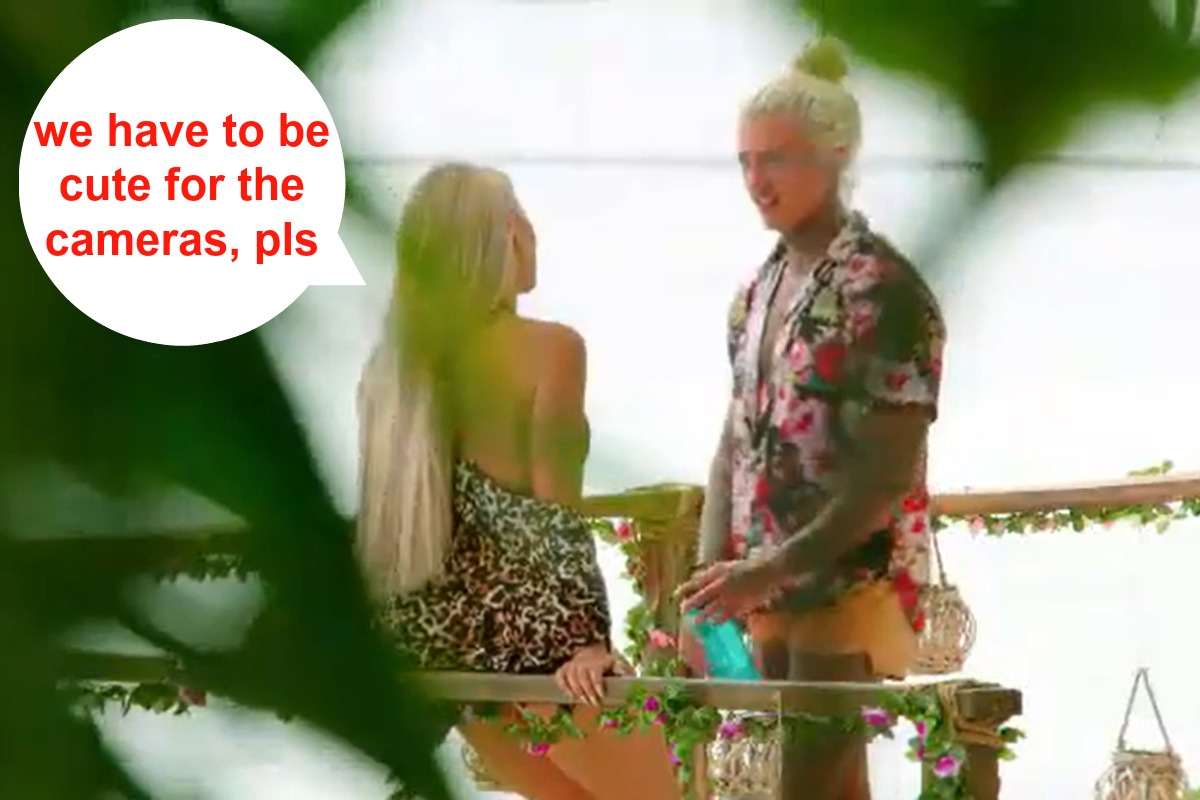 Kiki and Ciarran sit down with Steve and they can't quite get their story straight.

Steve is confused about when they met, and whether their relationship was prearranged and honestly, so are we.

But speaking to producers, it's an entirely different story.

"There was nothing prearranged," Ciarran tells producers.

"If I was in a relationship with someone, would I had done what I did with Jess in the beginning? Obviously not," he adds, and we're sorry but precisely no one believes you.

Then, Kiki is asked whether Ciarran was supposed to "wait for her" when he came to Paradise.

"Yeah he was," she responded.

DUDE. GET YOUR FKN STORY STRAIGHT.

Once their chat wraps up, Steve says there's definitely not a future between Ciarran and Kiki.

"From what I saw, it's more staged than genuine," he says.

"But who knows, it may be an arrangement for a future Instagram family."

After their ~interrogation~, Ciarran returns to the group and he's fkn fuming. 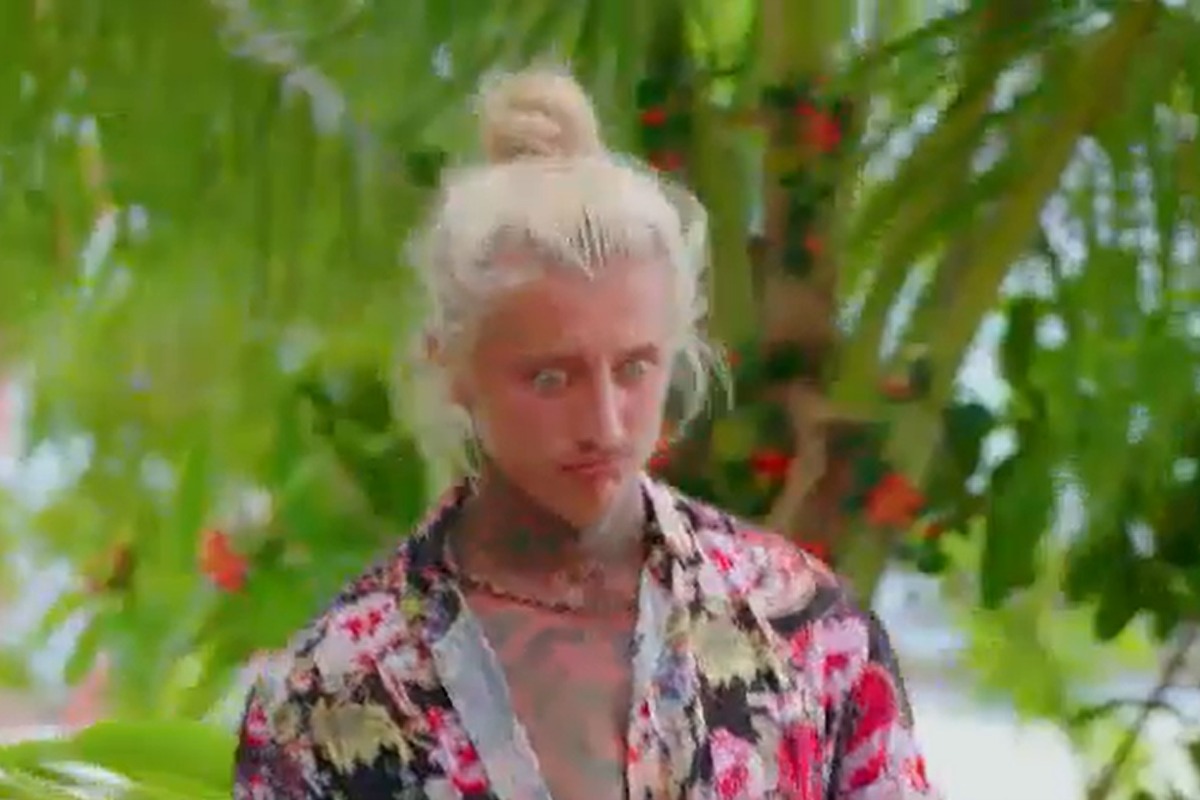 He heads into the bathroom and slams the door and he's all like "FFS THIS IS A JOKE INNIT".

He's mad that the whole cheating situation has been brought up again, and he decides to set things straight with Renee... to *checks notes* protect his image.

"I only regret cheating on Renee because that makes me look like a bad person," he says.

"I don't want to be portrayed to be the bad guy in this situation."

He takes Renee away for a chat, and Renee tells him that he "disrespected" her by initially going after Cass, who she was friends with.

She tells producers that she worked with Cass to design a ring for Ciarran's birthday present. But when the ring arrived, she found out that he had cheated on her.

"I don't think I'm ever going to receive the closure that I want from Ciarran," she adds, before running to her room. 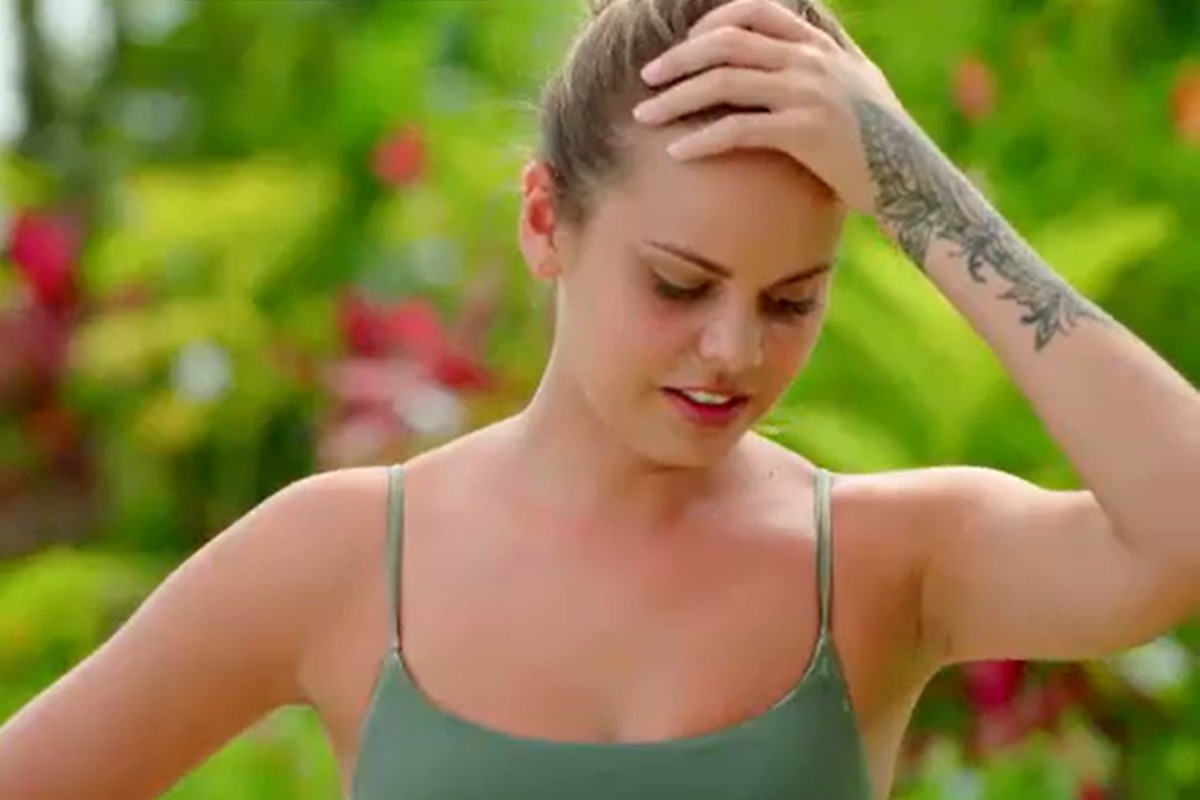 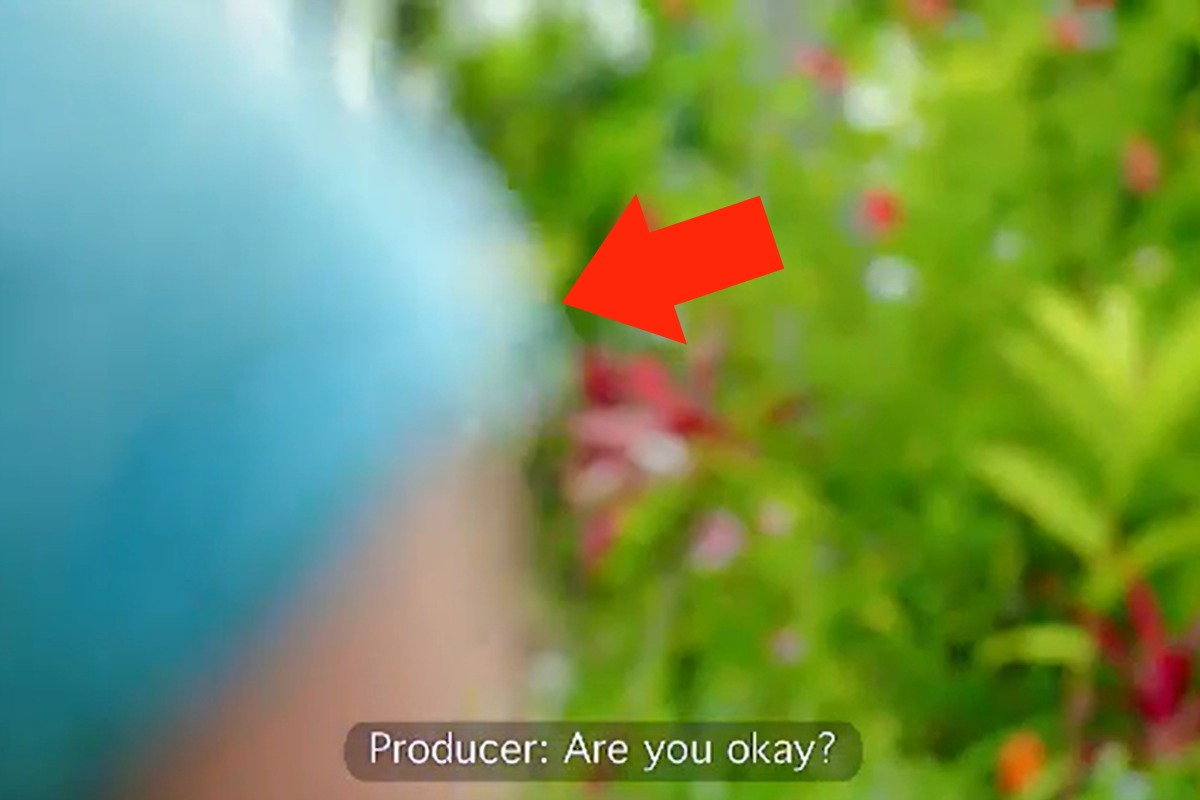 Who are you tho?

Over in her room, Alisha asks Renee if she brought the ring to Paradise because she thought they would get back together.

"Yeah, because he told me that," she tells her and wait, what?

HOW MANY WOMEN DID CIARRAN PROMISE TO GET WITH IN PARADISE?

Eventually, Renee and Alisha decide to get rid of the ring.

They run into the ocean fully clothed and the other contestants are... confused.

"What ring? Why on earth do I not know about this?" Kiki asks the group.

"I just need to get this f*cker out of my life. I'm done with the bullsh*t," Renee says before throwing the ring into the ocean.

WE LOVE THIS FOR YOU. 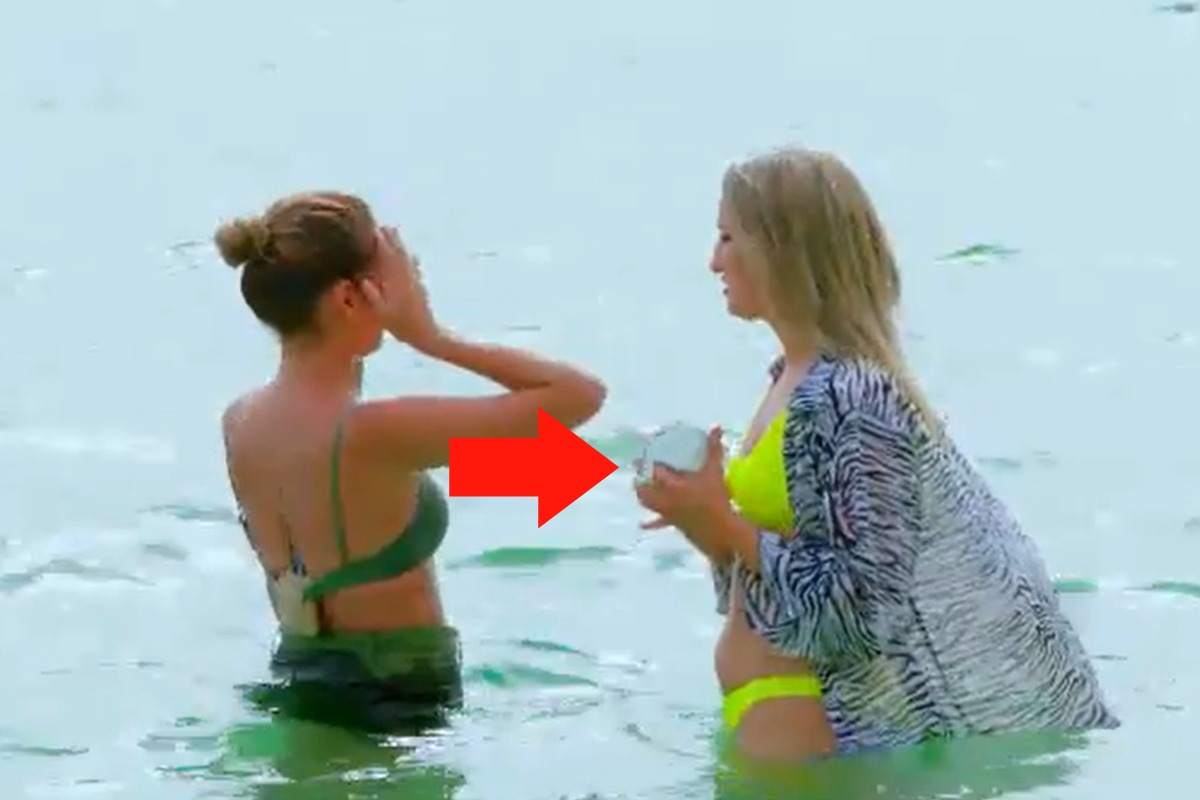 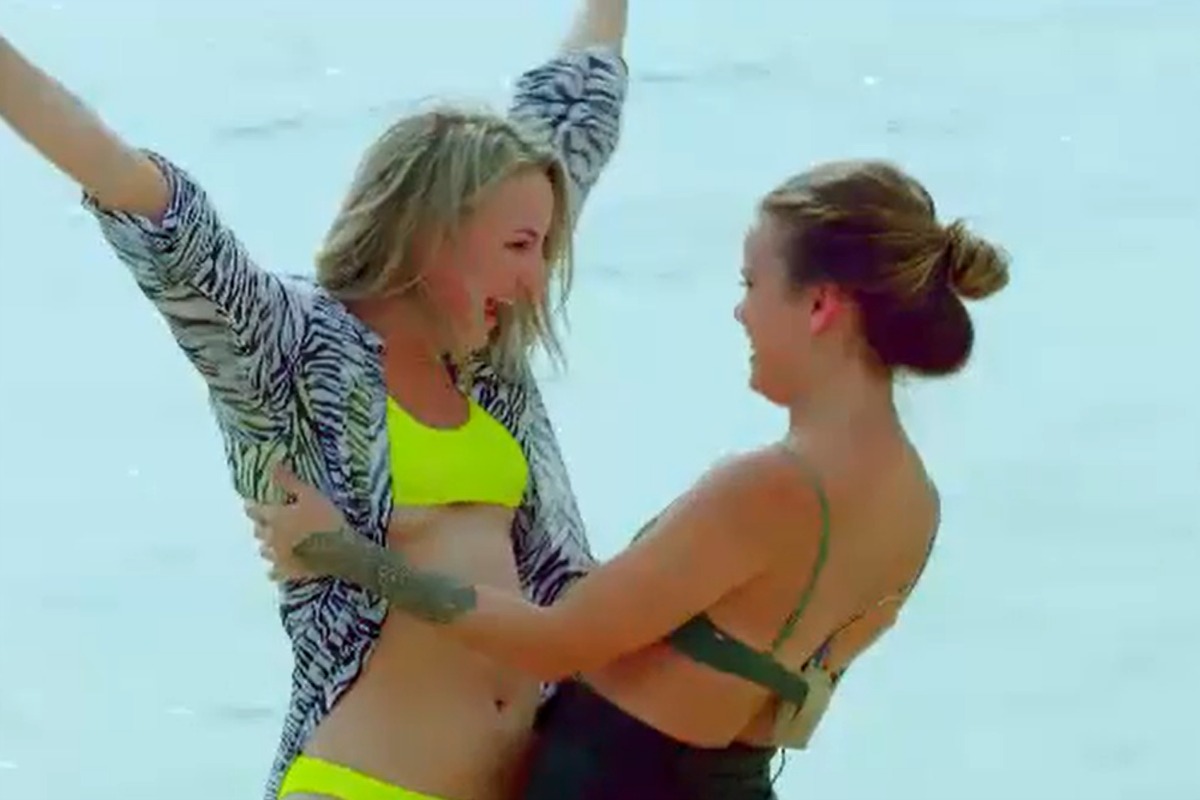 He tells the group that tonight is the last rose ceremony, and the couples will decide if they want their partner to meet their family and friends.

Sh*t is getting real serious.

As the cocktail party kicks off, Kiki asks Ciarran why he didn't tell her about the ring.

He tells Kiki that he only knew about the ring because he saw Renee wearing a ring that was too big for her... so he assumed it was his. Lol.

"I don't trust him anymore," Kiki says, before storming off.