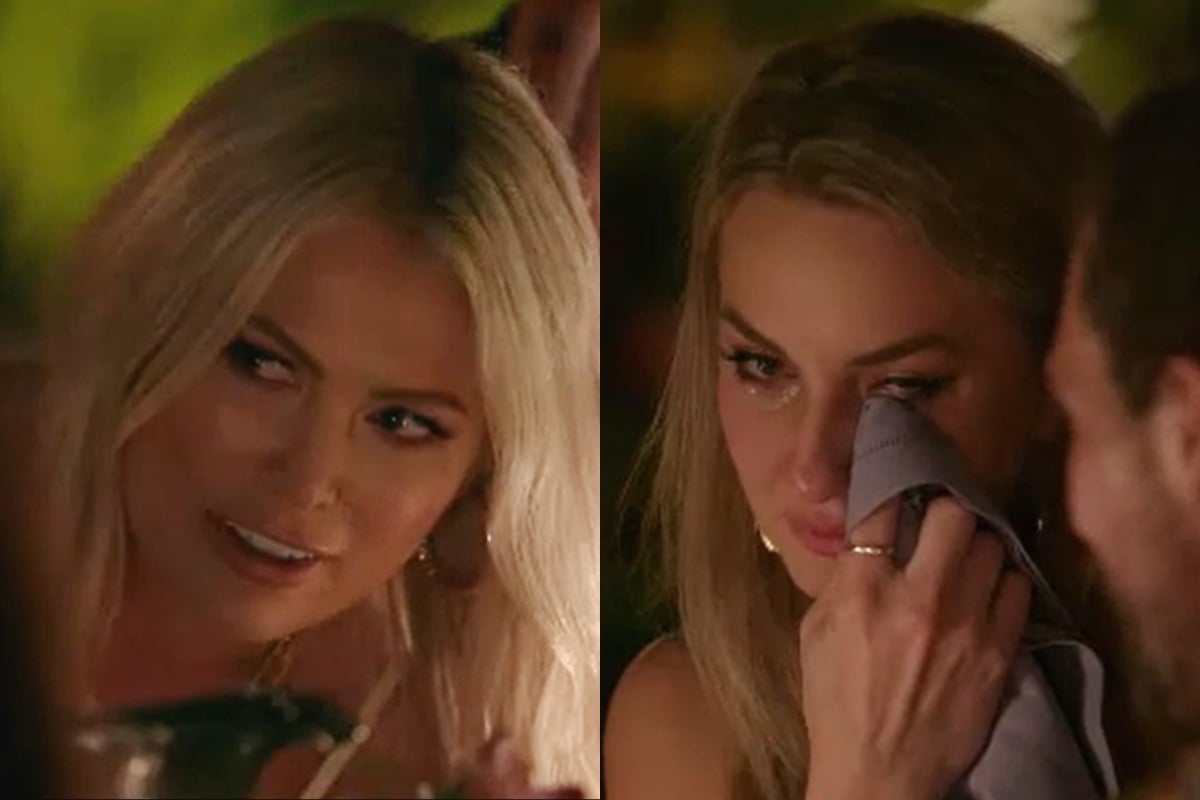 It's time for another episode of Bachelor in Paradise, which is apparently now on our screens four nights a week.

We open on Mary, Alisha, Cass, Helena, and Renee, who are discussing that one time Jake rage quit the show over "friendship roses".

Alisha claims that some contestants, including Ciarran who "isn't looking for someone to marry", aren't here for the right reasons.

This show wasn't designed to give people a second (or... third) chance at love. It was designed to help former reality TV contestants get a second chance at landing an Instagram teeth whitening endoresement.

Elsewhere in Paradise, conga Brittany is talking to Alisha about her decision to give Jamie a rose at the last rose ceremony.

She tells Alisha that she thinks there's "something there" between them, but over in Jamie's hostel villa, Jamie is talking to Timm about Helena... again.

He tells Timm that Helena "gets his quirkiness", before moving on to talking about his newfound interest... Renee. ¯\_(ツ)_/¯

Yep, cool. Despite conga Brittany giving him a rose, Jamie still thinks he's on The Bachelor. 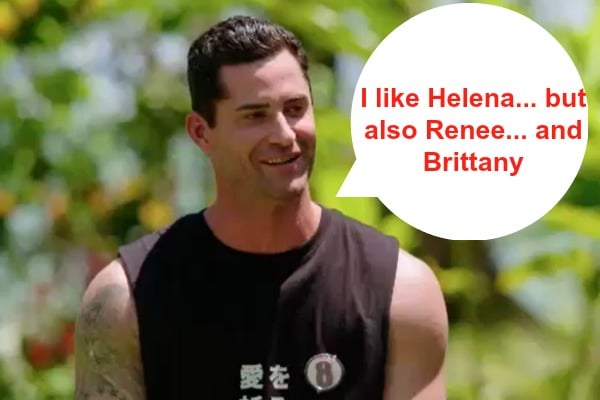 Pls. You're not The Bachelor.

Keira, a.k.a the "villain" from Richie's season of The Bachelor, has returned to Paradise.

She meets Osher and his hawaiian shirt, who tells her that she'll be playing a "little game" to find her perfect match in Paradise, which seems unnecessary, but okay.

After telling producers that she's hoping for a helicopter ride and some champagne for her return to the show, Keira arrives at a rogue flower wall, where she'll be taking part in a B-grade re-enactment of Netflix's Love is Blind.

Over at the flower wall, the men take turns answering very important relationship questions, such as a) "How many Instagram followers do you have?" and b) "Are you here for the right reasons? Y/N?" 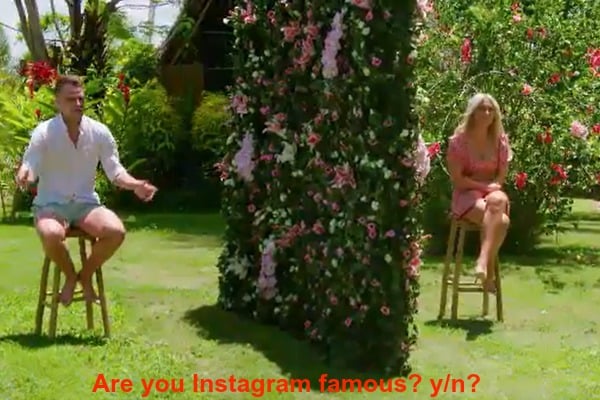 When it's Jamie's turn in the hot seat, he is asked about his most embarrassing story.

"It was probably not being able to come up with an embarrassing story on national TV," he tells Keira, and uh, what about that time you tried to... run away last week.

In the end, Keira picks Conor, a.k.a the perpetually sunburnt "cleanskin", for a single date.

Back at the villa, the boys have returned from the Love is Blind set and the girls have started panicking about Keira's imminent arrival.

You see, while the last season of Bachelor in Paradise was airing, Keira claimed that Alisha, who was in a relationship with Jules at the time, had "copied" her storyline with Jarrod on the show.

Watch the promo for Sunday night's episode of Bachelor in Paradise below. Post continues after video.

Meanwhile, while Keira and Conor are on their date, Jamie tells Ciarran and conga Brittany that he's excited to see Keira in Paradise.

"If she's absolutely horrible then I'll just run back to [conga Brittany]," Jamie says, and FFS.

WHY WOULD YOU SAY THAT???

Then, after conga Brittany (understandably) walks away, Jamie tells Ciarran and Timm that he wants to take Renee on a date.

CAN THIS MAN MAKE UP HIS MIND, PLS?

"He wants to have his finger in every single pie," Timm tells producers, and don't... say that. Please.

Osher is here and it's time for another Bula Banquet, which is essentially Bachelor in Paradise's bootleg version of a trashy Married At First Sight dinner party.

Seriously, Osher has even started referring to Keira as "Cyclone Keira."

The Bula Banquet begins and it's time for lots of yelling about FRIENDSHIP ROSES and INSTAGRAM DMS.

Once again, John Aiken has planted a box of questions designed to start sh*t and Jamie is... sweating.

The first question, presumably written by Jake (?), is about friendship roses.

"I gave my rose to Brittany because I couldn't imagine waking up in Paradise without her here," Jamie responds, and sir. Not again.

He friendzones conga Brittany in front of everyone and it's uncomfortable for us all.

For the next question, Keira is asked if she came to Paradise purely to stir sh*t.

After Alisha is asked to share her thoughts, she tells the group that she'll speak to Keira in her own time... but Keira claims she doesn't even know her. ¯\_(ツ)_/¯

Later on, Alisha becomes emotional after Jamie admits (again) that he "doesn't know" if he has feelings for conga Brittany.

She reminds the group that she was in the same situation last year with Jules, before Keira pipes up and starts asking her why she has a problem with her.

They argue back and forth and we're preparing for a red wine throwing incident but before it can get to that point, Greg Glenn steps in.

"You're not here to f*ck sh*t up, are you?" Glenn tells Keira sarcastically, and wait... we kind of love Glenn now. 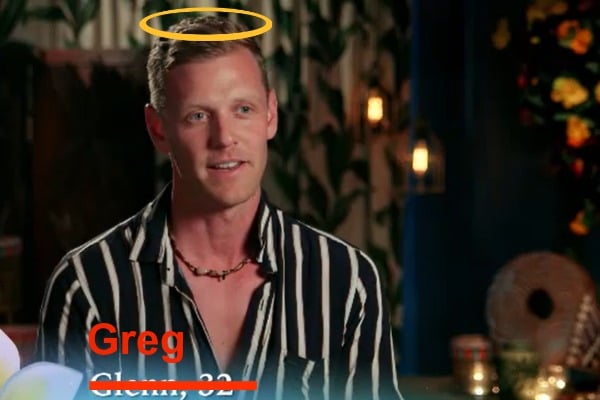 WE LOVE YOU GREG. I MEAN GLENN.

Later on, Ciarran, who actually thinks he's on Love Island, takes Keira away "for a chat".

"If a bird is a little more spicy, I'm going to go for it," Ciarran tells producers.

He tells Keira that Jess (who is out sick) gave him a rose, but that "doesn't mean they're in a relationship". Riiiight.

It's the next morning, and Ciarran is getting out of Renee's bed.

Renee tells the girls that they had a chat, and Ciarran told her that Jess "will never be" her, before they fell asleep together... cuddling.

Meanwhile, Jess has emerged from quarantine and Ciarran has run over to attempt to explain why he spent the night in his ex-girlfriend's bed.

But before Jess has a chance to properly respond, a new arrival enters Paradise.

Kiki, who ~allegedly~ hooked up with Ciarran prior to the show, has arrived, and she has a date card.